Okay, so, Sunday evening after firing off that last post, I made walking toward Wat Damnak to see whether anything would be going down. But before I could manage to arrive, this guy came into my life. 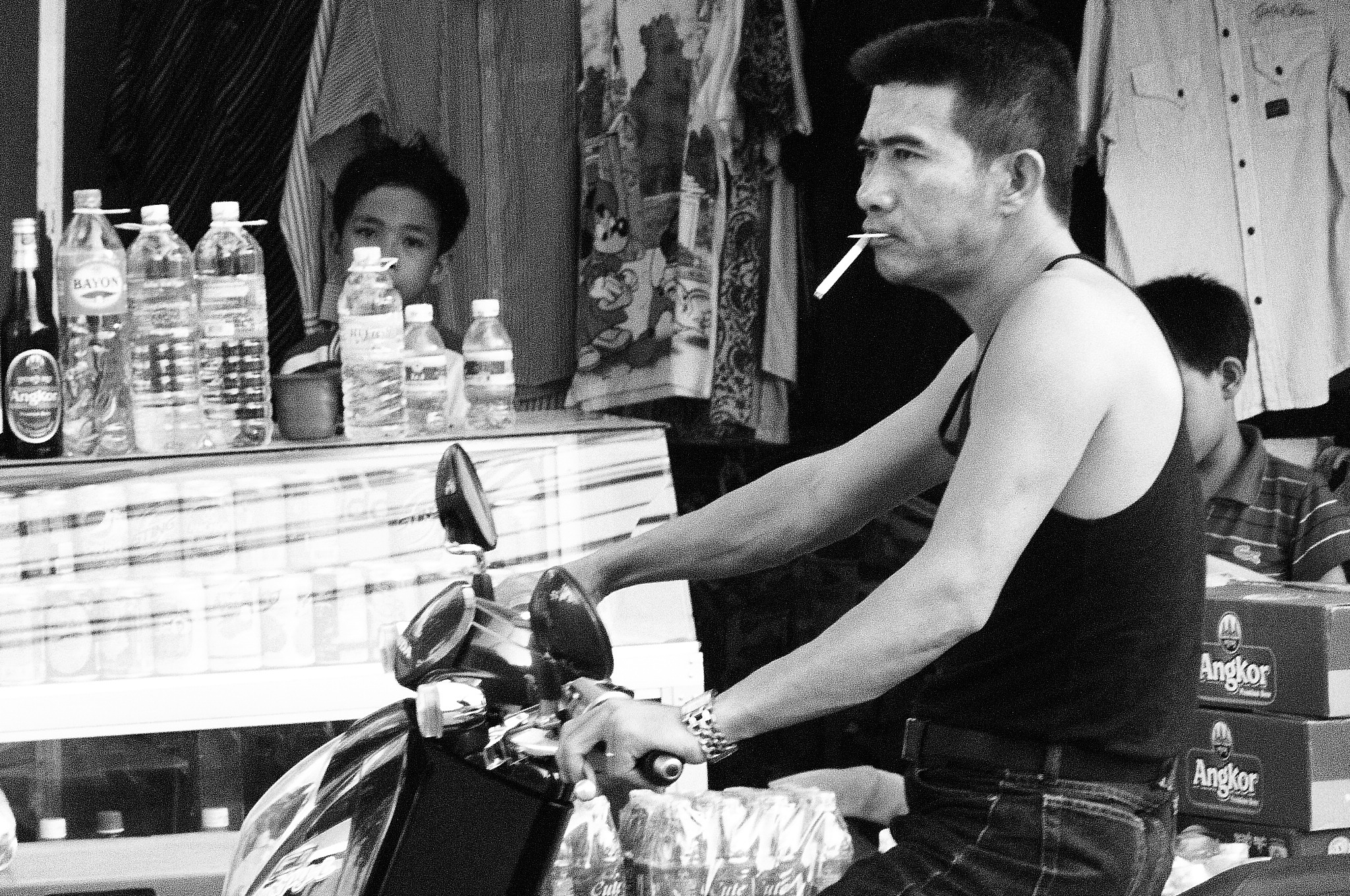 Are you fucking kidding me? Simultaneous cigarette and toothpick action? Be still my heart!

Arrived to Damnak as the parishioners were in the midst of a down-home Monk-Soaking and Mass-Buddha-Washing.

You can see that the monks were dishing it out a little bit, too. But, mainly, they were on the receiving end: 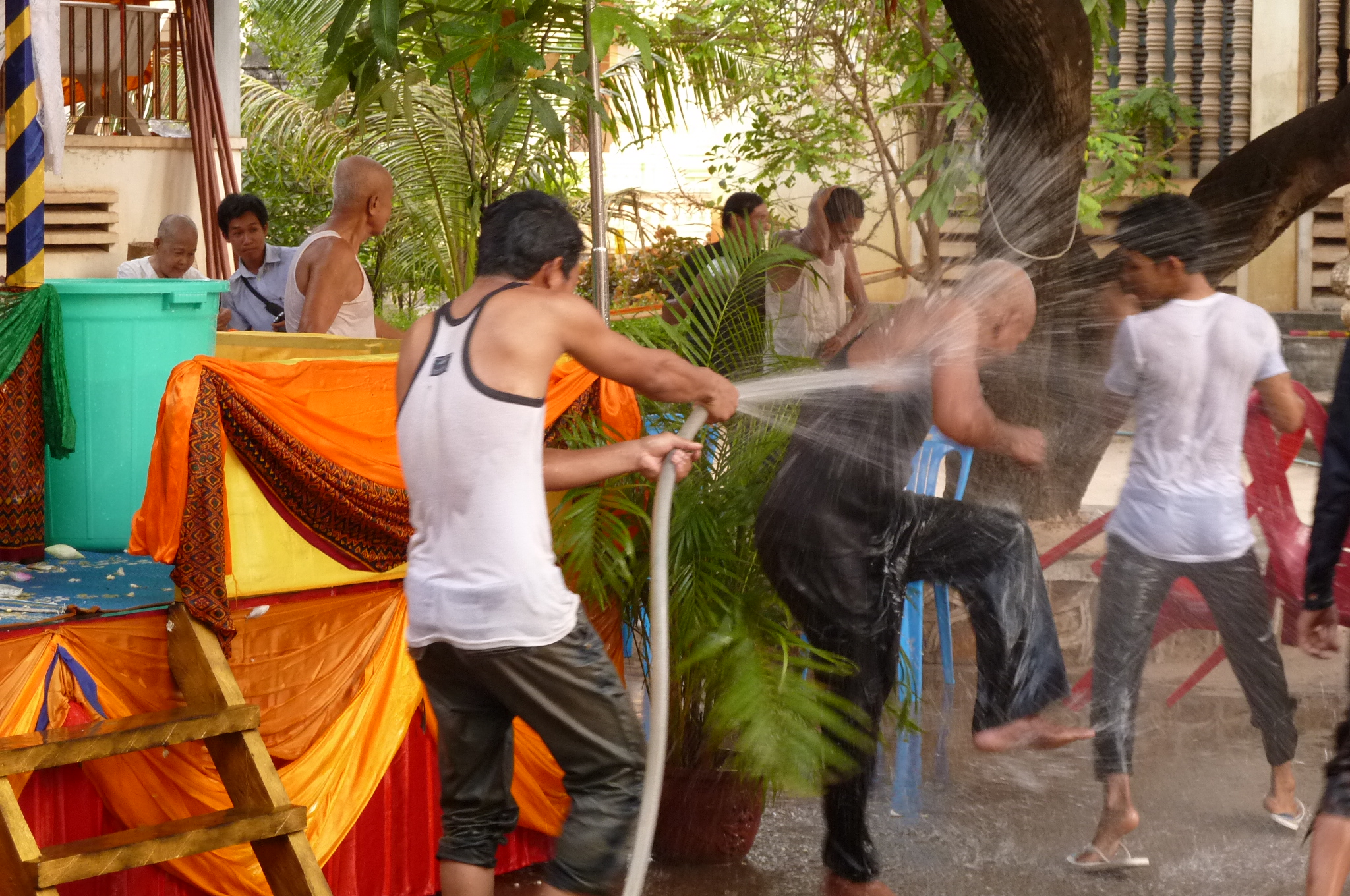 Don’t  never let it be said that the Khmers are unable to enjoy theyselves!

After they’d finished hosing the monks, it was time for the spit-the-bottle race.

After the race, MC Monk here received a phone call; but either he neglected to turn off the mic, or it was all a part of the show. No idea what was said, but it was broadcast out over the PA for all to hear. 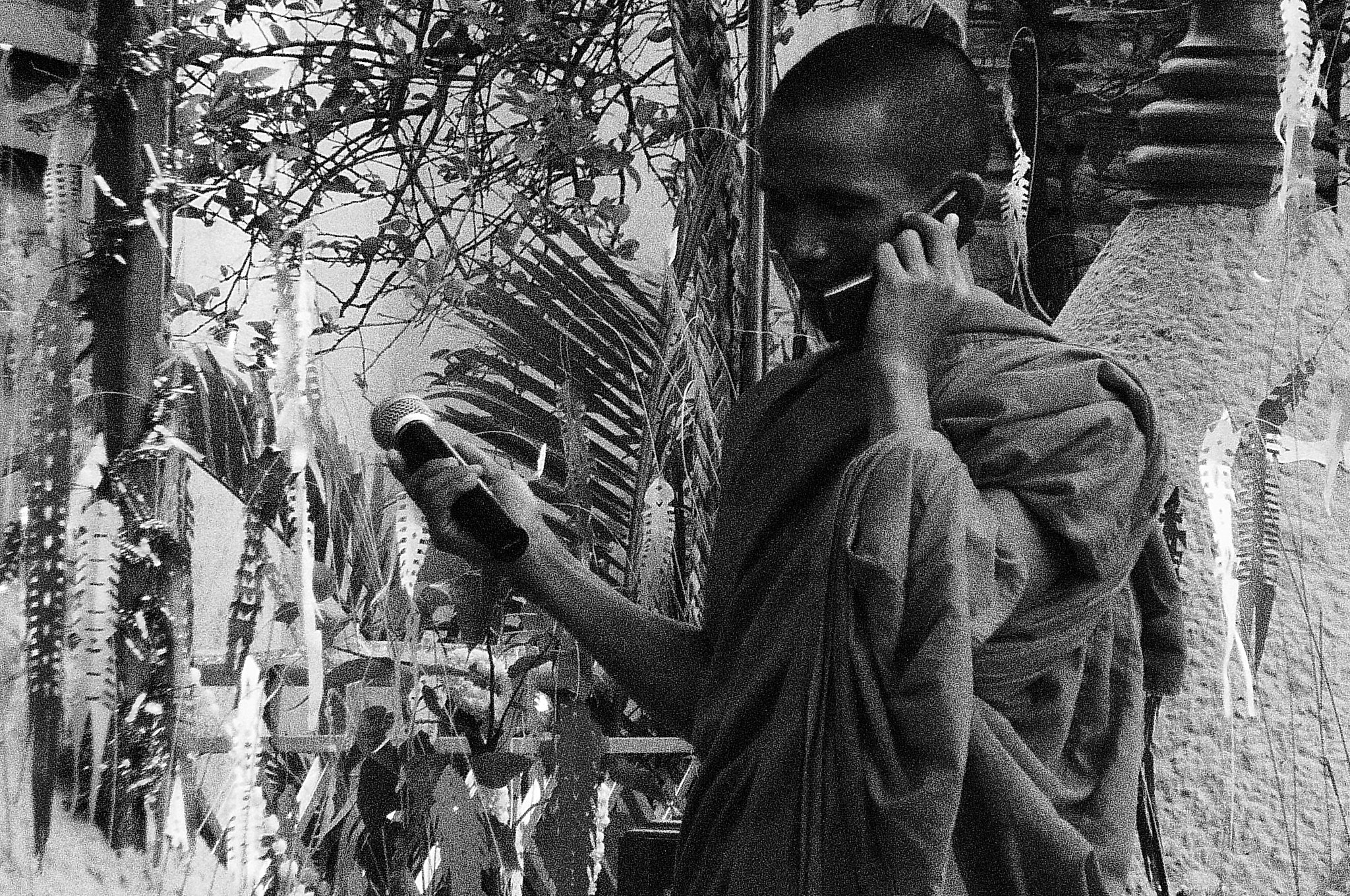 Next was all for the musical chairs.

Gotta say, not sure when I’ve seen a group of people derive so much enjoyment from a simple little game of musical chairs. 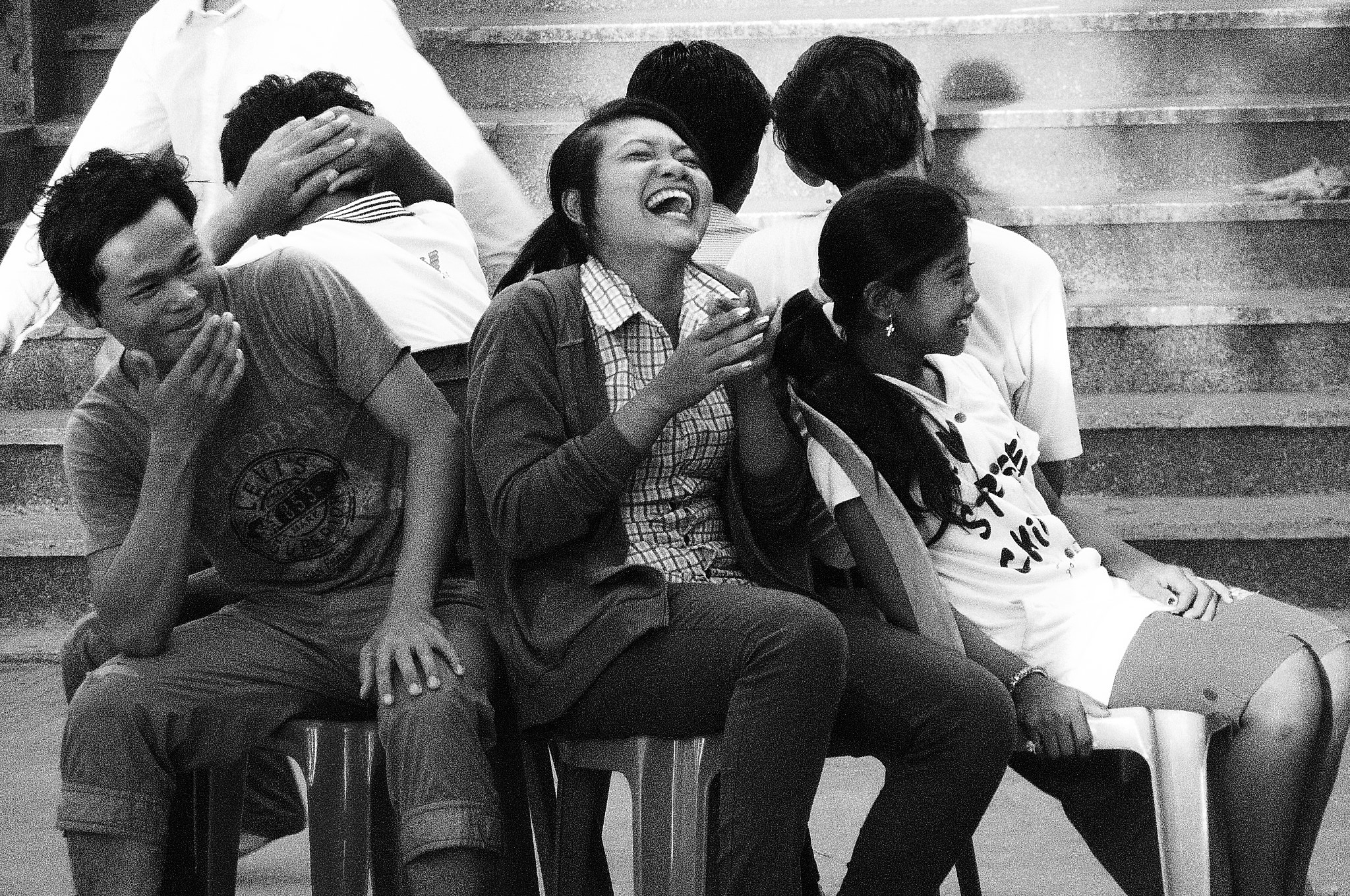 They played, like, a pinata game; but instead of a beast full of candy, it was a bowl full of cash-money.

Between all of the different games, they dragged this plant out into the middle and danced around it for a few songs. I guess this is what that one web-page is calling the “Trot Dance”.

But the best dancer of all turned out, again, to be a little kid. What’s in the water in Siem Reap that the little boys are rocking such smart moves? Dunno; but the quality of the music must be a fine inspiration, at any rate. 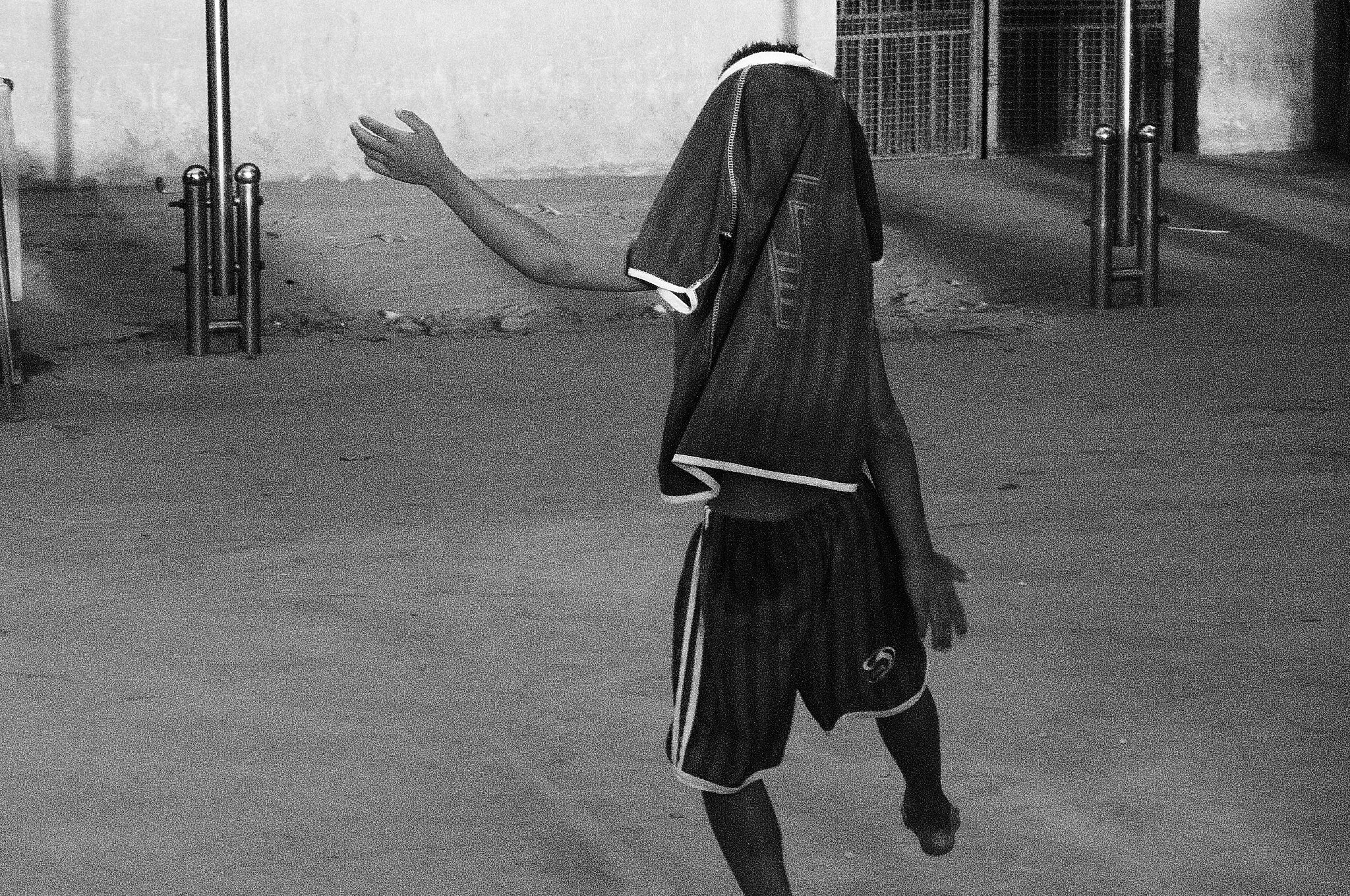 When time came for the gunnysack races, I was invited to participate in the second heat. So there were five of us all lined up to play. MC Monk, speaking in English now, conducted with me a brief interview; then took great pains to make sure that I understood the rules of the game — it was exceptionally important to them to drill into my head that we had to race down and then back again. I was even asked to hop down the course a ways so they could make sure I wasn’t going to do anything stupid.

When they were relatively confident that they’d got me sorted out, he began counting down, still in English: “Tens… nines… eight… sevens… six… fives.. fours… threes… twos… ONES!”

And we were off. When they played back the tape, it was plain for all to see that I’d brought up the rear. Although, except for one boy — whom I should guess is half kangaroo; I think was crossing the finish line before I was even making the turn — I was quite close to the pack.

Even after having brought up the rear, I was summoned up the steps; and one of the monks awarded me 2,000 Riel (that’s about fiddy cents — used it later on to get me some cucumbers).

I was then invited to join in the tug-o’-war. It was a ridiculously evenly matched contest; and though it looked on a couple of different occasions that our team was just about to succumb to the rout, we dug down deep and ended up the winning side. Funny thing was, the three anchors were all little kids.

At about 7:00 or so, the mosquitoes began to announce their presence, and I opted to skedaddle. (They arrive later in Siem Reap than is normal for the region; but then end up staying for a greater duration.) The funtimes were still going strong: at the time I left, they were on again to the suspended-apple game.

Monday morning, yesterday, was again quite subdued at the temples. At Damnak, there were a bunch of people inside praying, and some outside washing The Buddha (somebody get that poor sumbitch some SCUBA gear, already!).

The sand mountains were still standing both at Damnak and Promrath — though the latter’s’ decorations had all been removed.

Afternoon in the park, I was joined by a bunch of locals, asking me the usual array of questions. After some minutes, they’d all had enough, and wandered off to go on about their lives.

Except for one (whose name I didn’t catch)… 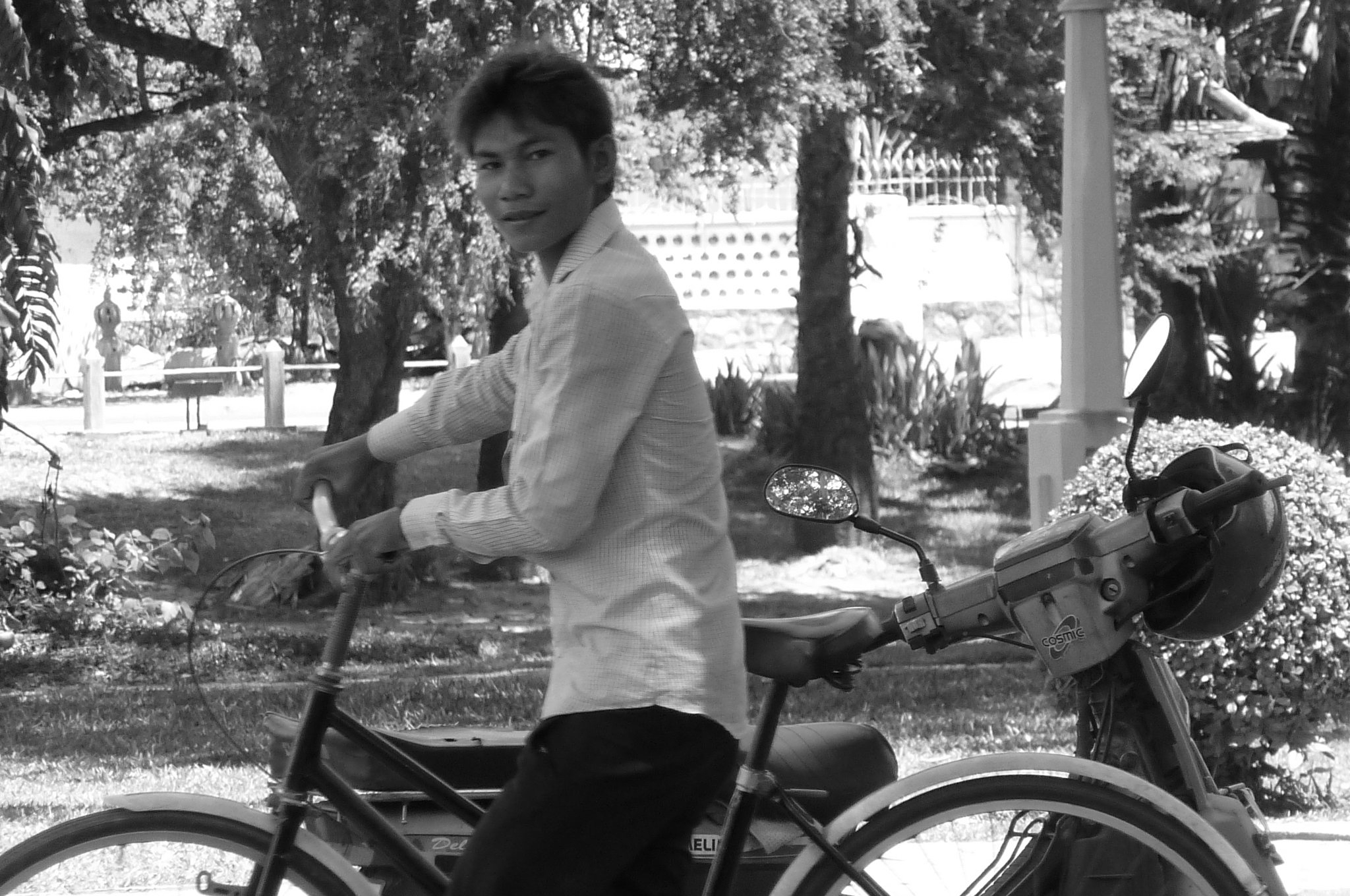 …who lingered on quite some time to use me to help him with his English vocabulary. He’s schooling in the Hospitality industry, so apparently wants his English to be as good as it can be.

In the evening, back at Damnak, it was gametime yet again — involving water, or not. Here’s how it looks like when somebody wins the pinata game.

During the fill-up-the-bottle game (same games from the previous night, but in a different order), MC Monk had his camera firing. 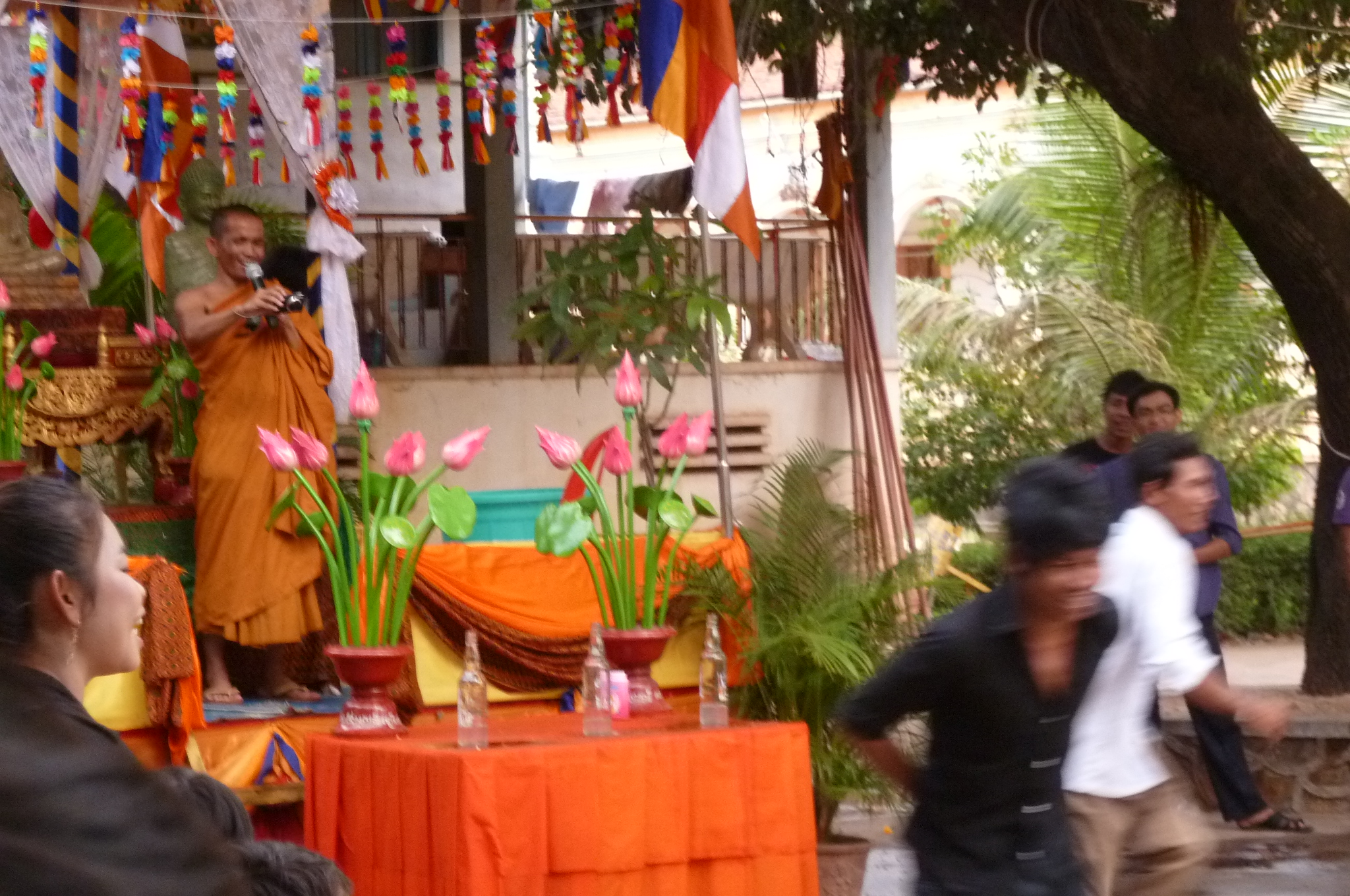 Here’s a fun crowd-watching clip shot during the match. I especially dig the little boy in the red top (at about the 1:10 mark), looking as though he were witnessing an in-progress Martian landing.

One game which I’d not seen being played the previous two nights was the board race. (Indeed, I don’t recall having participated this game during my childhood?) Here’re the home-stretches from each of the two heats.

So, as I say, this Khmer New Year didn’t play out quite like I’d guessed it might. And sure, I’d liked to’ve seen the all-out public-at-large water wars practiced on the streets in Laos and Thailand. (Then again, here in Aranya Prathet, I’ve seen a number of paint-splattered vehicles to-day; so it looks as though it was more than just water being employed during their Festival…)

In the end, it didn’t compare to Bangkok’s Chinese New Year — then again, few things I’ve ever experienced in my live-long days can compare to that. But it was great fun in its own right!

Tuesday night, now, in, as noted, Aranya Prathet. The less told about the process of arriving here the better. Suffice to say that while one Festival had ended, there was a new one just begun. This one’s participants were gifted with the patience to endure many, many hours of waiting, waiting, waiting (as often as not) in the relentlessly hot, baking sun.

One funny event, though, occurred on the Cambodian side of the Frontier, at “Passport Control”. Wacky Russian guy was attempting to surreptitiously cut to near the front of the line — with an absolutely ginormous luggage in tow.

A bunch of people called him out on it, and he tried to make like he was just deploying his luggage up near the front, to save him having to move it every time the line moved. But then, he kept hanging ’round near the front of the line; and finally a Texan invited him (the Russian) to cut in front of him (the Texan).

At first, the Russian presumed that the Texan was reprimanding him, and told him to “stop hassling me”; but then when he realised the true nature of the Texan’s offer, he beamed like a Christmas Tree. On and on he continued about how wonderful it was that somebody around here respects their elders, and kept shaking the Texan’s hand over and over.

At first he refused the Texan’s offer, saying it’d never been his intention to cut on line; but after buttering the Texan up for a while, he finally did accept the cut. Then when he got to the booth, he ended up arguing with the clerk forever, claiming that he’d not overstayed his visa by two days, but rather only one, as yesterday’d been a Holy Day, and so the Minister Of Immigration in Phnom Penh had told him that the Frontier would not be available, and to cross to-day instead.

He then produced a letter to this effect. Whether it was the genuine article, I don’t know; but it is true that the buses weren’t running yesterday. He ended up arguing with the manager for a while, and kept letting drop that he’s a “journalist” — just letting the implication hang in the air like some kind of ticking time-bomb, or something.

Finally, he was taken away to the overstay hut. When I myself arrived to same, he was still arguing up and down that he was only to pay for one extra day in Cambodia, not two. Meanwhile, copper came and collected the passports of the five or six of us freshly arrived — our submitted greenbacks tucked inside. He disappeared into the office, and after a few minutes emerged to re-distribute the passports.

No mess, no muss. We’d been stamped out of Cambodia, and were free to spend the next three hours (yes, really!) waiting to get stamped into Thailand. As I departed the scene, the cuckoo-puffs Russian was still arguing his cause. For all I know, he still is.