Not A Whole Lot To Report

Huhn, well, this Khmer New Year is a pretty subdued event. More to do with relaxing and enjoying a few days off, it would appear, than in big, bombastic displays and thronging in the streets.

Yesterday, Saturday, early morning, arriving to Wat Damnak, I did find that since I’d previously visited, they’d gone and built up the sand mountains and installed the Buddha-washing station. 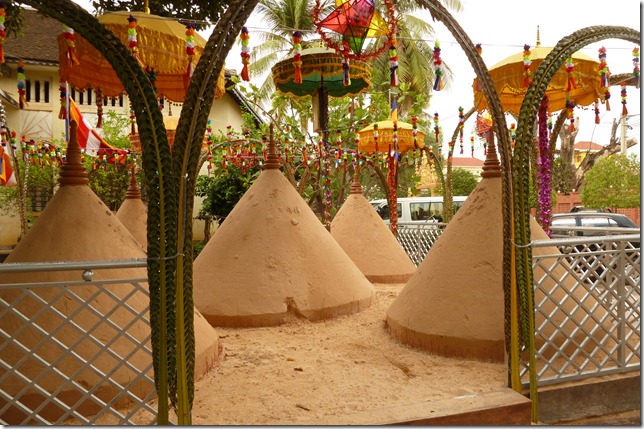 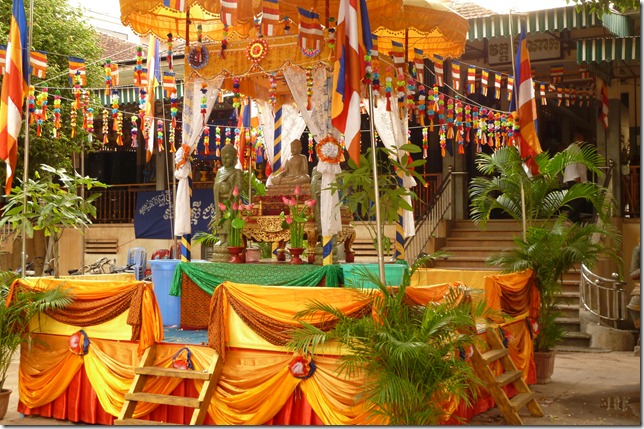 Inside, the folks were all dressed in white, and just finishing up a morning prayer.

Up at Preah Promrath was a similar prayer going off – but listen closely, you’ll hear that this one was rooster-aided.

Promrath’s only a single-mountain kind of a temple – but it’s such a nice mountain, even in its lonesome state. 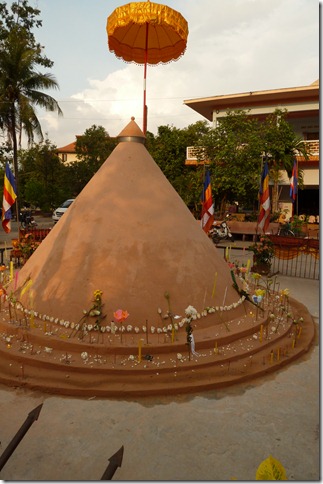 While the grownups were inside giving their all for Lord Buddha (Yay, team!), the kids were waiting, dressed up and ready to go with their performance piece. 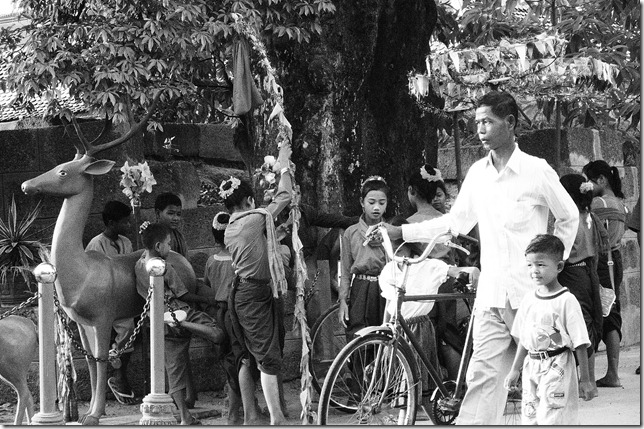 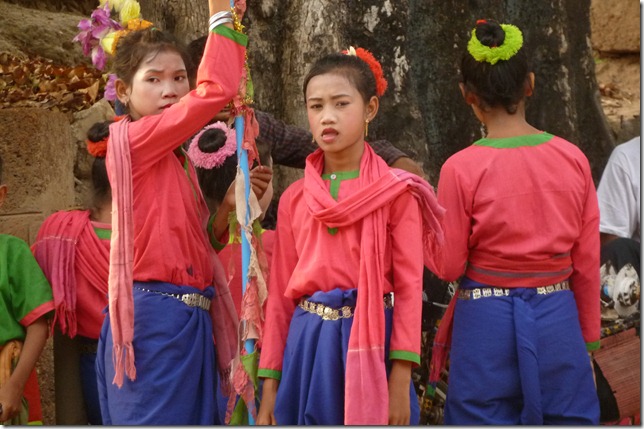 Some late arrivals stopped to do the Buddhawash thang (they do it so well) before heading on into the temple to pray. 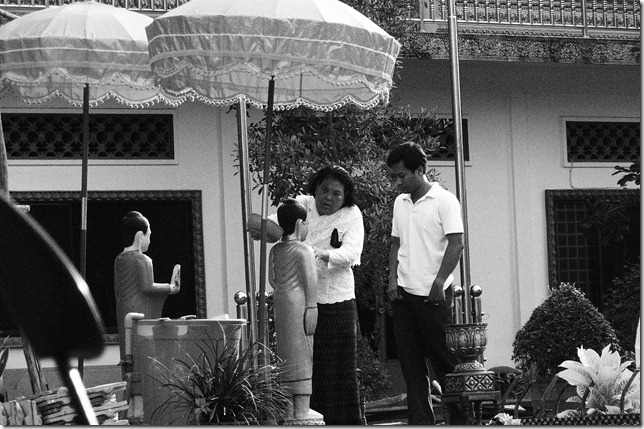 The kids’ song and dance was great. Nothing beats Cambodian music, mang! If you keep your eyes peeled, you’ll be able to witness some red-hot Buddha-washing action going on in the background here (beginning at about the 2:00 mark).

After this first number, they next performed an enigmatic money-‘n’-basket dance in which the grownups would put money in the basket, which money would then be dumped out onto the floor and picked back up again to be returned to the basket. Not sure what it’s to symbolise, though the New Year festival is in general to celebrate the successful completion of the season’s harvest and the coming of the monsoon. So maybe it’s something to do with that.

What I am sure about, and quite, is that this character… 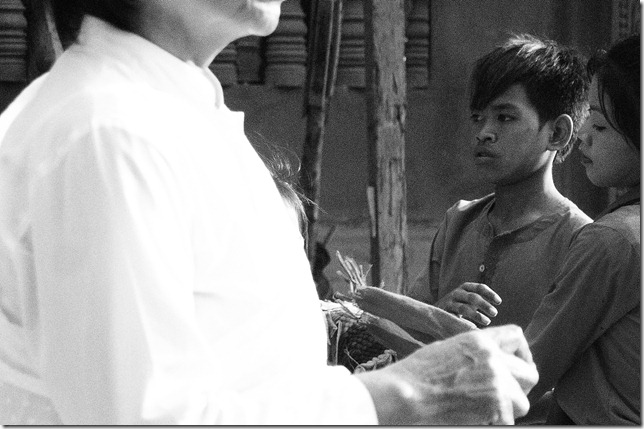 …all thinking he’s the next coming of John Travolta (or what), stole the show, but good, right from under the basket-dancers’ basket-dancin’ feets.

Over to Wat Bo, the mountains were still under construction. 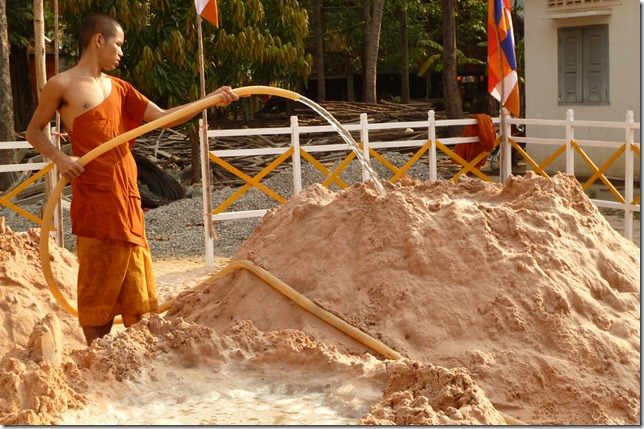 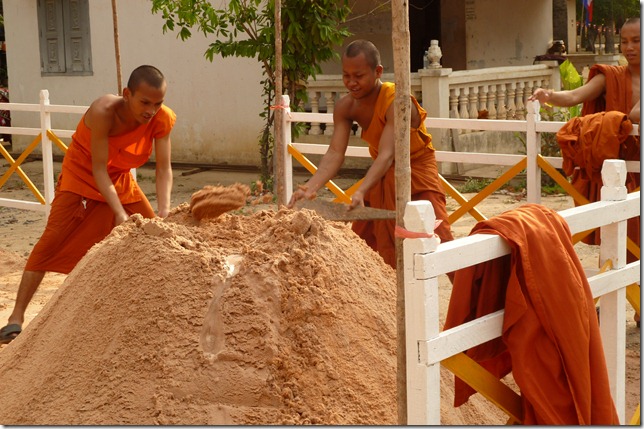 Ha! Well, I guess we now know from whom Spielberg got the idea to have Richard Dreyfuss put up an earthen monument in his front room… 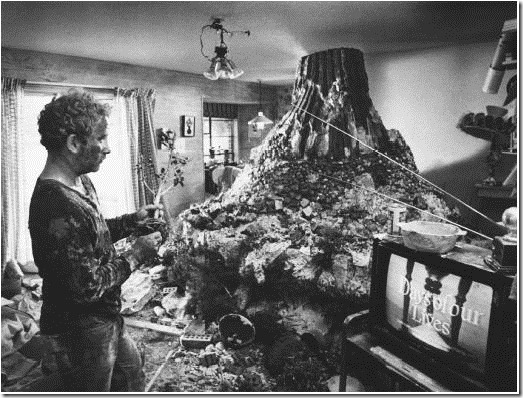 I hung around for quite a while, watching ’em shape those cones, baby. The novices were having a gay old time…

…but the two older gentlemen weren’t fucking around, bro’. Not the first sand mountains these two’d ever constructed, I’ll tell you what. 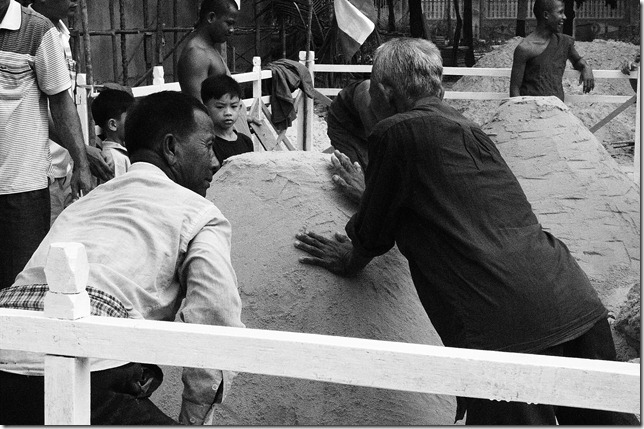 Civilians were dropping in as well, to get in a few pats-down before wandering off to pray. 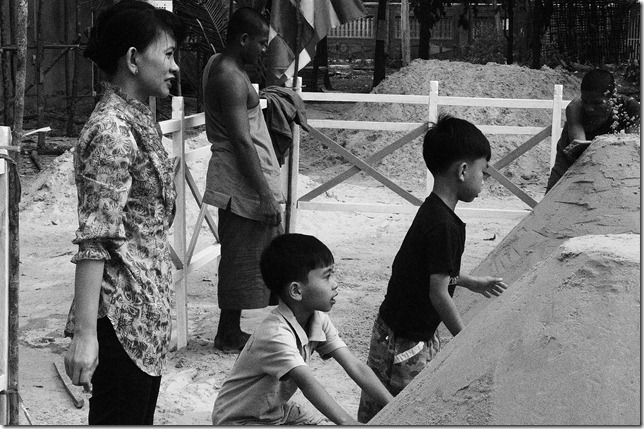 One of the novices explained to me the meaning behind the mountains. If I understood him correctly, for any who help in the mountains’ construction, if the King wants to take his or her life, he (the King) must first count every grain of sand in the mountain, one by one. The novie said that to leave the mountains standing for more than a few days would be a “big mistake”; though I couldn’t work out just exactly why.

Up at that temple in the northwest part of town, whose name I don’t know, the sand mountains are rather a rag-tag affair. 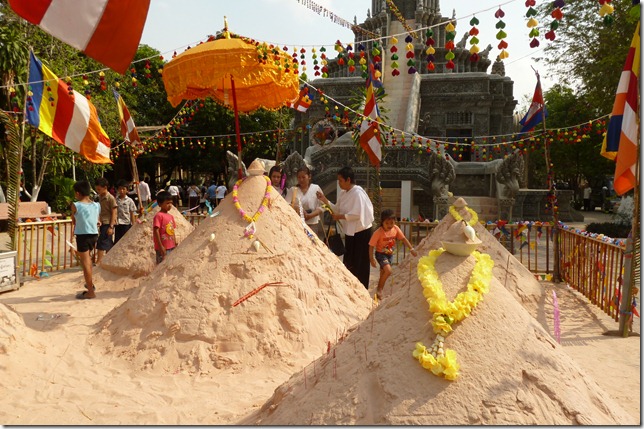 Guess that’s what you get when you allow the novices free rein – need to bring in the old-timers to make sure everything turns out ship-shape. When I arrived here, the people were just digging in to a big old breakfast buffet.

At the afternoon, I called back in to Wat Damnak, to find the kids engaged in, like, birthday-party games: gunny-sack racing, and racing bowls of water to and fro’, and such-like. Each game’s winners went up to the top of the temple steps and received some cash-money from the monk.

According to one page I seen on the so-called “World Wide Web”, there’s a “kick the nuts” game as well:

During this third day, the people also play some traditional games such as the hand-scarf-throwing game, they kick the nuts game, the tug of war game, trot dancing (Battambang, Siem Reap).

Unfortunately, I didn’t get to see the kick the nuts game. Think it’d have been a hoot, in either common usage of the noun-form of  “nuts”.

Along about darkfall, a local asked me if I’d like to join in a game with him, for which preparations were then underway. It was to do with the eating of an apple “without the hands”. Sure, I’ll eat an apple. I’d thought we’d be teammates; but he wasn’t even involved at all. It was myself versus two teenaged girls.

After the suspended apples’ twine-lengths were adjusted to each competitor’s height, the apples were then by turns given ceremonial washing in a little tin bowl. Here’s how the playing field looked like just moments before the gun went off. 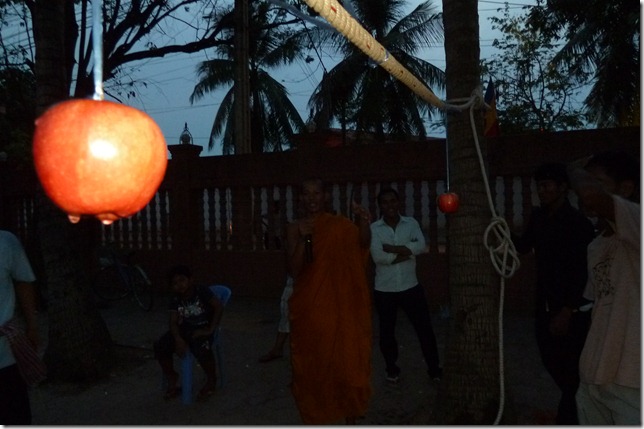 (No, there wasn’t an actual starting gun — I just made that shit up to try to sound cool.)

That guy there on the far right was initially slated to’ve been the third competitor; but he balked right at the decisive moment, and so that’s when the second teenaged girl was wrangled from the crowd to take his place.

Then the goofy circus music fired up, and we were to it! Everybody gathered ‘round real close, shouting their encouraging remarks. Futilely, it seemed to me; as this was an impossible game. The damned apple just wiggles and wriggles, and doesn’t ever permit you to get your hungry chompers around it.

But then!, one of the girls was at last able to successfully bite off a chunk of hers – I’ll never know how – and the gathered home-boys and home-girls, they went off their collective gourd.

That proved to be the game-winning bite. At the competition’s conclusion, my butt having been well and truly skunked, I bowed low to the winning teenager — but what a feat she’d accomplished! — and was permitted to eat the apple “by the hand”.

Outside of the temples, though, you’d hardly know it was any kind of an occasion. Streetside, there’re some offerings set up on tables. 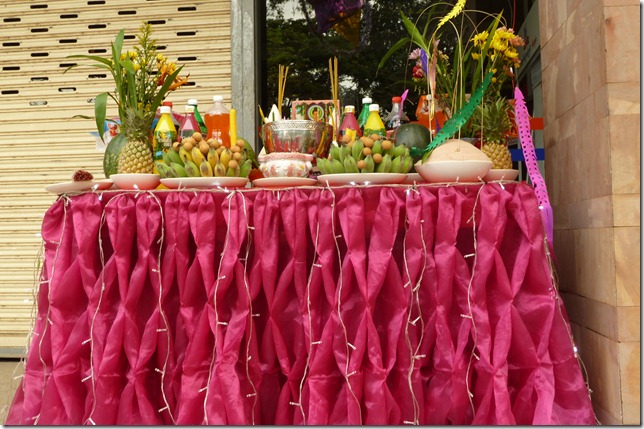 And there are plenty of decorations up…but, they feel more tacky and plastic than the Chinese New Year’s’ dizzyingly beautiful elegance. 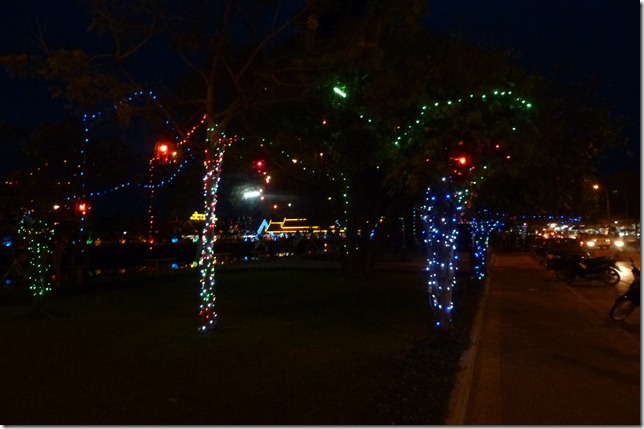 The expected red-shirts were out in force; didn’t seem to be bothering anybody any. 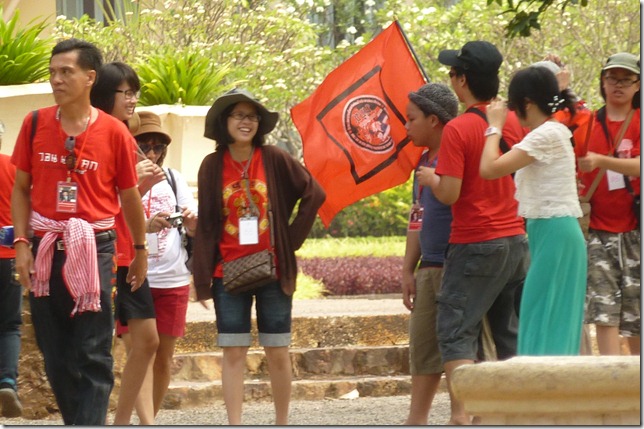 On some of the sidewalks, people had set up little tables and were playing cards, or BINGO, or board games. And that’s about it, so far. Haven’t seen any water-throwing at all. (In e.g. Chiang Mai, Bangkok, Vientiane, and Luang Prabang, or so I’m to understand, it’s impossible to walk down the street without having one’s dimpled ass completely soaked the many times over.)

Everything I’ve seen has been interesting and fun. But there’s not as much going on as I’d expected there to be. This morning, Sunday, even the temples were quiet as a mouse — though there was the odd family stopping by and getting its Buddhawash on.

The pagoda, oddly enough, was abuzz with activity. I had guessed that the pagoda would maybe be the centre of the city’s festivities; but instead it’s just been business-as-usual there. To-day, however, was as busy as I’ve ever seen it be. No Buddha-washing here, just straight-on put the incense and pray the Lord and get thee back on the charter bus.

Hee hee, I’d not ’til this day realised what a nice little racket this guy’s got going with the shoes concession. 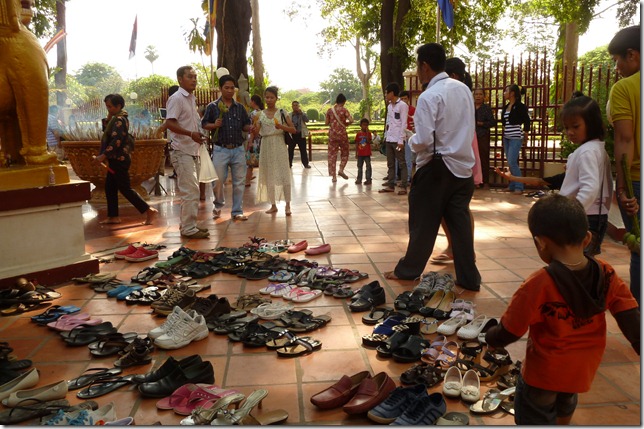 No shoes allowed in the temple, y’know. And everybody tips him out when they return to re-shoe their poor beleaguered feet. Son of a bitch is rolling in it on this day. 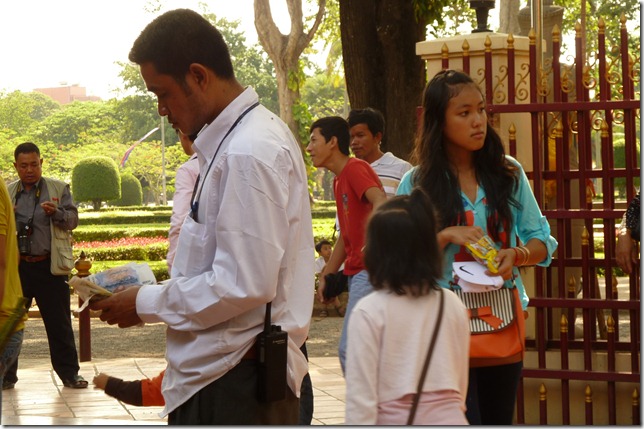 Gotta admit, he definitely does a good job keeping all the shoes nice and organised.

The band were going off like nobody’s business. They only stopped to let the kids do a little bit of the basket dance.

Man, what about that Cambodian music? So fucking great! This performance also included a pretty exuberant hunting enactment.

Now then, what better way to celebrate a New Year than with some black-and-white photography? Can you beat black-and-white imagery of a young Asian gentleman in a hat and/or a young Asian lady preparing to make offering all-the-while enshrouded in incense smoke, rocking too-big shades, and wearing a “Fun Butterfly” t-shirt? 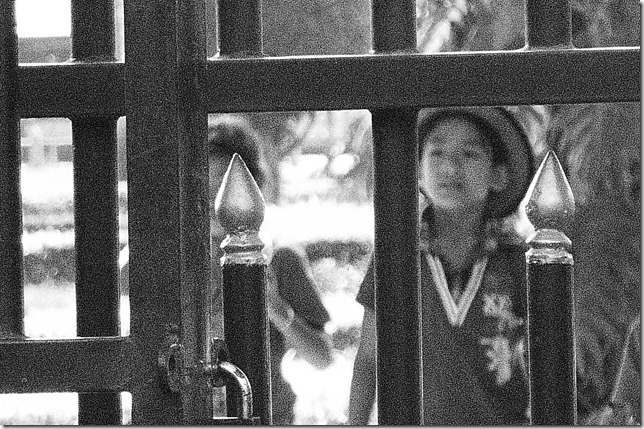 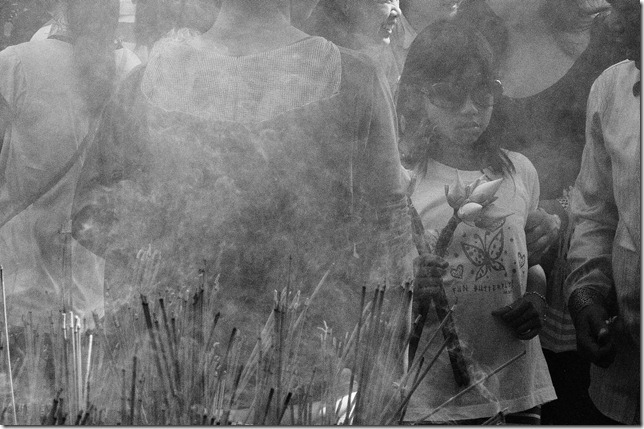 1 Response to Not A Whole Lot To Report