From where I’m sitting, northern India is about ten million times more interesting, entertaining, mind-blowing, and electrifying than is Kerala. There’s just nothing to match the all-out cultural and sensorial onslaught of the north, and certainly none of the larger-than-life/beggar-the-imagination achievements as can be seen in the ghats at Varanasi, or the Taj Mahal, or the huge forts in Jaisalmer and Jodhpur, or the Golden Temple in Amritsar, or the tremendously beautiful man-made lakes in Udaipur, or the incredible colonial architecture in Delhi and Mumbai along with the sensational museums in the former.

The south, of course, is not supposed to be about the Gilliamesque spectacle that reigns in the north; it’s supposed to be the rustic, laid-back, rural side of India — the natural wonders, rather than the man-made. They call Kerala “God’s Own Country” — they being the locals, whom one can be assured will repeat that mantra within about fifteen seconds of having made an acquaintance (and just in case it had been forgotten, the same is printed everywhere on signs as well). Fifteen seconds later, they’ll not-so-humbly wonder  your opinion of their humble abode.

Well, guess what? It’s every bit as polluted as in the north. It’s every bit as hectic and harried. It’s every bit as pedestrian-unfriendly — in fact, even more so. The quality of the local fruit is much better in the north. The stench of burning plastic is every bit as acrid here, and every bit as frequently smelt. While people are friendly and welcoming here, they’re much more so in the north (though I suspect this may be because English is more widely spoken in the north). Yes, it’s less crowded than in the north — but there, the massive crowds are of fellow-pedestrians, so even if you bump into one or a hundred, you’re not going to end up flattened like a pancake as you will if you take your eye off the ball here in the sidewalk-less streets of the south.

Are the ocean and the sunsets beautiful? Yes — magical even; they’re in the end what makes Kerala bearable.  But there are a lot of places whose beaches and sunsets are every bit as ace as Kerala’s — indeed, nearby Sri Lanka’s give Kerala’s a right royal thumping, I’d wager. Are the backwaters beautiful? Yes, they clearly once were — but now they’re very dirty and oily and filled up with plastic, and often smelling like…well, frankly, smelling like what all y’all yahoos are always accusing Durian of smelling like. Even where it’s possible to for example find a stretch of unpolluted backwater, you’re still going to be within earshot of the noisy traffic roaring through on the road behind you. (This is not 100% always the case — but it’s very close to.)

They make a big show of being stung by such heretical remarks when delivered — but, I say, who goes fishing for compliments ought not complain when reeling in an untoward opinion.

But if I love the north so much more, why didn’t I just pay a visit to the friendly railway booking office and clickety-clack my dimpled ass back up to Varanasi, you may wondering? Well, it’s because it was the hottest season of the year, and the north, without the moderating oceanic influence, was in even more heat- and humid-stifling straits than the south.

So, c’est la vie. Hanging out at the beach, eating mediocre fruit, and answering the same five questions from friendly locals over and over again still beats workin’, I daresay…

Here be the digest. All my photos from Kerala can be learnt just here.

India is just a royal pain in the ass, as I’ve written many words about before. And plus, it’s so hot and humid here right now that everybody, including your humble narrator, just wants to be put out of his/her/its misery. And plus, the Mangos are pretty crap so far. They’re not as worse as in Sri Lanka last year…but they’re pretty crap nevertheless. The locals say it’s on account of climate change — their favourite topic nowadays — and who dares deny it?

A guy told me that a few days before I arrived, a big wind came up and eighty-sixed about five dozen trees just in the Fort Kochi area alone — and with them the electricity for two days’ time. You can see them cut up and left in piles blocking the sidewalks all around town. A warning from Mother Earth, he reckoned; and of course he was right. The warning has gone unheeded, alas, as everything has returned back to normal, as though it had never happened.

We ignore her warnings at our very great peril, I do strongly believe — but through it all, every day in India brings a sight so stupefying you’ll never even know up from down again. Five minutes after snapping these astonishing pics, I just happened to walk past one of the last theatres in existence giving nightly performances of a traditional theatrical style (Kathakalli) unable to draw audiences any more. “Okey, I’ll give it a look.”

And do you know, the performance was so powerful and so beautiful and so dramatic that it as thoroughly imprinted itself onto my being as just about anything ever has done. Walloped upside the skull yet again — and this time practically for keeps.

Welcome back in India.

Ha ha, Time Palace & Gift Shop would make for the greatest rapper/deejay names since Custard and Frizz were in their heyday!

TRIPLE SIX-SIX-SIX!!!!! The greatest bus ticket ever issued — and I quite like the interior as well; more like a Sri Lankan bus, what with the blinking lights (occluded in the picture) and the bumping dance music. Southern Indians seem much more dour than their northern cousins: Friendly, to be sure — but not so exuberant. On this bus, at least, is a chance to let their hair down a little.

The conductor was pretty cool, too. When it was time to depart from the originating station, he hurried some kids onto the coach, pulled the door closed with the rope to which it was attached, then looked out to see if any more kids were coming. Noting that there were, he stepped back, kicked the door open, and hurried these kids on as well. Over and over again, the same routine; must’ve been a good four or five iterations. Why didn’t he just wait until all the kids had got on? Don’t know — I think he just liked kicking the door open. He was quite spry for a man of his heft.

Unfortunately, I need to remove my dimpled ass from Varkala after only one night — despite its extreme beauty and (relatively) laid-back vibe — on account of the air quality is very, very poor. Everybody’s burning palm fronds, or something. Don’t know whether this is a seasonal thing, or goes on all year ’round; but it ain’t float my boat. It’s funny, every-other building is for Ayurvedic this-and-that, or eco-healing, or whatever. And I’m like: “Hey! McFly! Didn’t you know that the single most important component of healthful living is fresh air?” Sheesh.

Youth wants to know: Why are Asian people so disgustipated by the thought of breathing fresh air?

Kovalam hijinks. Unfortunately, this place stinks, too — there’s a gasoline smell all the way along the shoreline. Sometimes stronger, sometimes weaker, but more less always present. It’s the curse of Kerala, apparently: The beaches are enthralling to behold, but you’d best not breathe through your nose…

Found in one of the storage spaces in my room. Beats the ever-lovin’ crap out of the Gideon’s Bible, I daresay!

Are you freakin’ hallucinating my dimpled ass, or WHAT? Another mind-wrecking day down by the seashore — this time courtesy the unsanely dramatic wave-action and inestimably beautiful sceneries here at Azhimhala Beach, a few miles south of Kovalam. A sonofabitch could find hisself addicted to these Keralan beaches, ain’t it?

You wouldn’t think it from the pix and viddies, surely, but this experience was the closest I’ve come to openly weeping at the natural beauty of a place since…well, probably since the first time I laid eyes on the Ganges from the ghats at Varanasi, doggone three-and-a-half years flown by now.

India, man. It makes you scratch and claw + beg, borrow, and plead for each/every tiniest morsel. But when the payoff hits your soul like a ton of, you know, there’s just no other place like it.

’tis indeed a pity I’m such a fuckwit as a camermang, ’cause this place…visiting this place is about the closest I’ve come to having an out-of-body experience. Objectively, I wouldn’t even say that it’s as eye-popping as e.g. the Tip Of Borneo area; but, there’s some kind of force here, just pulls your dimpled ass IN. You know what I’m saying?

Clickety-clacking my way back up north. Had intended to visit Kanyakumari — the southernmost point of India — just to say I’d done it; but all the accommodations were either expensive or suffered poor ratings. I note, however, that the longest train route on the subcontinent originates/terminates there — three-and-a-half days, and a passage in Sleeper class is like fifteen bucks! Question is, though, how to provision oneself with fruit, considering the longest halt is only twenty minutes’ time (in the north, there were always multiple fruit stands right near the railway stations, but I’ve not found that to be true down here)? Could I arrange an airdrop en route? Not this trip — but one of these days I’m going to do that shit… 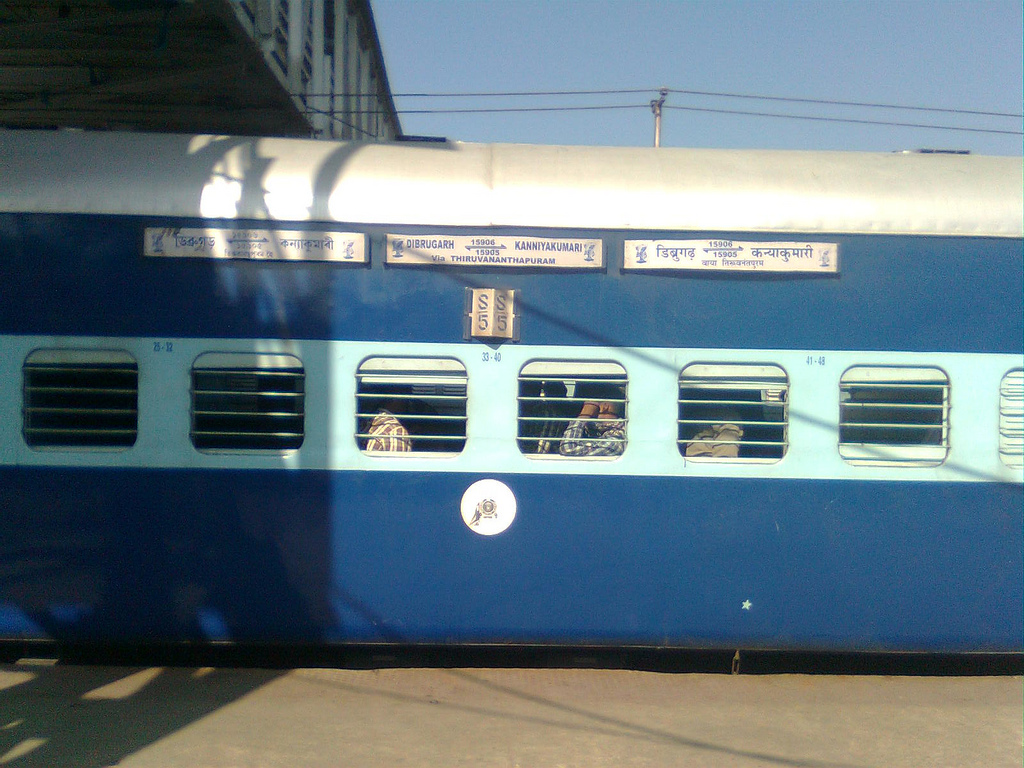 Hey, party people (yes, that means you). I filmed my first “video vlog” — stop and have a look-see, won’t you? If it made your buttcheeks tremble, you can feel free to press the “Subscribe it!” button (or press “You fucker!” if it didn’t…)!

Two tours through India, and I still have no idea how the fuck cricket works. (Although I did return a batted ball to some kids whom had been too lazy to climb the cyclone fence over which it’d flown, having instead waited for the first passerby to hook them up…)

Has Kathakalli become my new religion? Yes, yes it has.

Have all but given up on the Mangos here. A guy told me there are good ones grown in Karnataka — which, actually, I can believe, recalling the VERY great quality of the Watermelons and Bananas I was getting up there three years ago. But I’m loathe to venture inland, where it’s even more hotter than here on the coast (and the cooling monsoon ain’t arrive there for at least a few more weeks yet). So, the great, big Indian Mango Adventure was a great, big fail. But with sunsets like these-all, it’d be criminal to complain, I think. You know, it’s funny: I basically hate everything about Kerala except the beaches, the sunsets, and the Kathakalli — but I love each of those so much that I kind of can’t wait to come back…

This entry was posted in Surf. Bookmark the permalink.