Yes, I did visit many temples on Saturday. Of course, there are so many more that I did not get ’round to. They’re pretty much everywhere.

I think I have now contracted an acute case of Templemania (only known cure: visa expiry). The artistry and the craftsmanship which has been put into the making of these structures, statues, and paintings is undeniably awe-inspiring.

Indeed, I did experience a moment or three — whilst alone in some temple whose name I didn’t even catch, but which is not significant enough to show up on the map — of…call it what you will…bonding with the infinite, or such-like. I can’t say that I felt “touched by god”, so much as overpowered by the utter devotion and sincerity which I felt, in that moment, had been put into the creation of this hallowed space.

So, I guess I felt something more akin to the feeling one sometimes gets experiencing music or movies than an outright spiritual connection. But, certainly, I’ve never felt this way before when witnessing any of the visual arts.

Perhaps, too, I’m coming around a bit on the temples themselves: if the putting up of donation boxes, and the selling of holy water, and food, and clothing, and souvenirs are necessary to keep the temples maintained and the monks in food and clothing, well, that’s a damned sight better than splattering advertisements everywhere!

Once again, many photographs were taken. And once again, one may learn all the details at my Flickr page. Though there are some nice images, I’m not as gaga for these photos as I am for my Chinese New Year pics. These spaces need to be experienced to be fully appreciated.

Also yesterday, visited the Thai Art And Culture Museum (at least I think that’s what it was). Fabulous! The Thai lifestyle captured mostly in what may be called two-and-a-half dimension sculpture: the scenarios created as large murals, protruding from the wall, but fully attached to the wall. If that makes sense? Unfortunately, “prohibit take photo”, so can’t show you what it’s all about.

Also unfortunately, before I’d been there very long, they began to turn the lights out. Guess they were closing up shop. I think it possible that I may have snuck in without the staff having noticed (was not my intention): I had been wondering why I was the only person in this freakin’ awesome museum?; and also had been surprised that such a freakin’ awesome museum was not charging a cover.

All templed out for the day, I set course for the market to get me some eats. Along the way, a picturesque sunset. Stopped off in the park, having noticed some inneresting goings-on. Viz., peoples were playing the fuck out of this damned little rattan ball you can buy in the shops. In Bangkok, I only saw people using it like juggling a soccer ball. But lookit how they get down Chiang-Mai-style! (Had forgotten that footage cannot be rotated as images can, so this will display sideways. Does not matter! It will kick your ass anyhow.)

Now, watch how the kids play volleyball with this thing! I mean, I don’t understand why they don’t rotate. I think they should rotate — but I suppose they never asked my opinion. This quibble aside, this looks like a lot of fun.

While getting my own eats, I of course had to spy on the cooked-food side of the ledger, and made witness to another master at the wok.

I must say, if it weren’t for all the god damned fucking traffic, I could really fall in love with this place. You know, people always say that when you travel outside the States, it makes you appreciate the good ol’ US of A all the more. Not that I ever really believed that.

But what I don’t really appreciate is “leaving” the good ol’ US of A for a 700-year old city in remote northern Thailand, only to find myself smack in the middle of Los Angeles. That’s an exaggeration, of course. But not sure how much of one. Makes one wonder how Thailand will make out as the oil-crash really begins to take hold over the next years?

But other than the motors, with their attendant air- and noise-pollution, this place is the tops. Especially it smells so great: there’re so many temples everywhere, and so many restaurants and food-vendors that you’re always smelling either incense or (what certainly must be) delicious food a-cookin’…or an admixture of the two.

Oh, and speaking of movies, my hostel-mates are freaking me out a bit.

A Dane in Bangkok, to whom I enthusiastically gushed over The Kingdom, knew of Von Trier, but mostly seemed familiar with his peccadillos and public melts-down rather than his movies.

Coupla Swedish girls in Bangkok were clueless about My Life As A Dog — even when I was able to relate its Swedish title. One of them thought she might have heard of it.

And a Taiwanese here in Chiang Mai, to whom I was gushing over Yi Yi, had heard neither of the film nor the dearly departed director.

Jeez! What’s next, a Japanesian never seen a Kurosawa flick?

As far as other hostel-mates, I’m getting them hooked on Sapodilla! It’s really great here in Chiang Mai, quite better that in Bangkok. I gave some to an Indian lady, and a Swiss gentleman; both were loving it.

Then there’s this crazy Russian who’s been here for weeks. He apparently won’t have any money until the first of the month, so he just stays at the hostel all the day long, surfing the Internet, sleeping, and watching American teevee shows via Russian Facebook.

He went nuts for the Sapodilla. Instantly claimed it his second favourite fruit, after the Mango. He’s not yet tried Durian, though knows that he “must” do. I told him where to buy some, and then tonight (Sunday), he was all bitching and moaning that he couldn’t find any there. He even showed me on the map where he’d looked. I think he just didn’t see the right vendor, but I showed him some other places I’ve seen them.

So, to-day, I took a walk out to the Bus Station to book my ride to the Lao frontier. Check the year printed on my ticket: 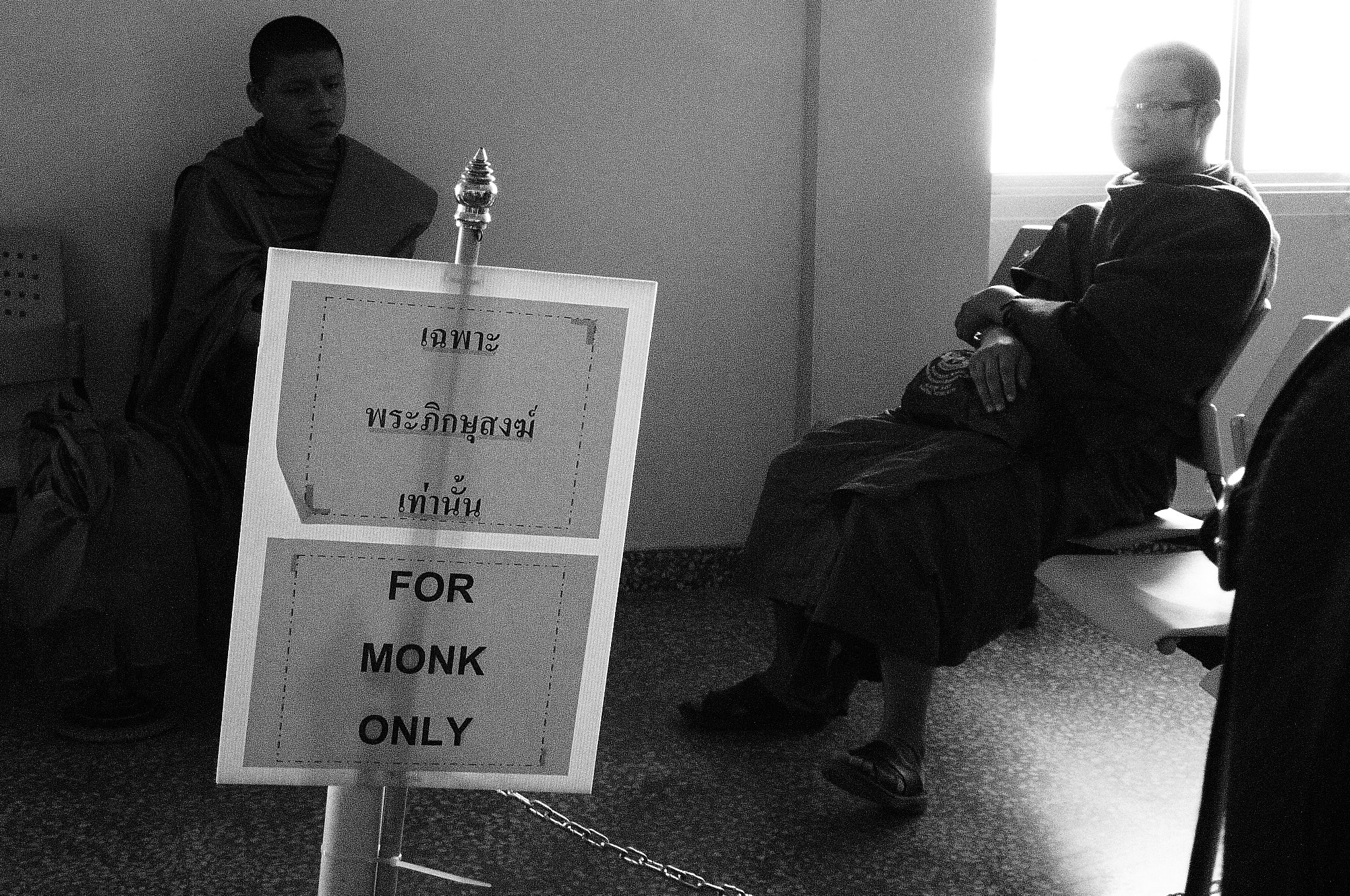 (But on the temple grounds, they gots to use the pay-phone…) On the way to the terminal, went by Warorot Market, the most famous Fresh Market in the city. All the guidebooks love it. But mostly they deal in flowers, meats, and spices; with some fruits and veggies thrown in almost as an afterthought. Nothing to write home about.

Made my way north from there along the river, and somehow missed the bridge to take the most direct route to the Bus Station. Well, the Buddha works in strange ways, ’cause by taking the indirect route, I seent a coupla amazing markets which I otherwise would not have. At one of the vendors’, there was a corn delivery in process. Look at all that corn! How could there be so fucking much of it? The Thais are supposed to be rice-eaters; but somebody is rocking the kernels.

Also here, was privileged to witness something which I’d not seen in any other market, either here or in Bangkok. This is how they keep the flies off of the meat. (Or if that’s not what’s going on, I don’t wanna know what is.)

By the way, dude that just arrived at the hostel tonight says he ate dog kebab while in Vietnam.

Saw something else I’d not yet seen in all of Thailand: avocados! Thing is, though, I’ve read that Thai avos are not very good; indeed, that most avos for sale in Thailand have actually been imported from Burma. Don’t suppose that these had been imported; but they were a bit on the pricey side, so I didn’t indulge. Perhaps I still might.

Back on the corn tip, this vendor is trying to tell something to the masses concerning their corn for sale. Okay, now the other thing I’d never have seen by taking the more direct route was this ka-razy-assed Street Market just on the other side of the river. It too stretched for blocks upon blocks. Mostly in one direction, but also branching off down a few side-streets.

You don’t believe the goings-on here! The vendors deal largely in either little amulets by the thousands, or in used (possibly hot?) items. It’s almost more like a yard sale, though.  And, so much of it is totally fuckin’ retro. And this…how did this shit even get over here? Wanna guess what was blasting out of the speakers? You don’t even need to, do you? It could be none other.

The following may as well have been sent special delivery from Mars. And this, while essential, almost doesn’t even rate. I ask you, what’s a crazy-arsed Street Market from Mars without a banjo-pickin’ Chinaman? It ain’t shit, that’s what! He asked me where I was headed, where my shoes were (huhn, maybe I could set the Guinness Book record for most times being asked where one’s shoes are during a 24-hour period…), where I was from. And then…

Apparently he has a friend there or something. But when he said it, it was just like a bolt from the blue.

But the day was still somewhat young; so, time for more Templeism! Much more Templeism. Does one need to see them all. No, I shouldn’t think so. Shouldn’t even think it’s possible, really.

But, while they’ve all got their similarities — the Big Gold Dude, elephants, dragons, incense, and so on — they’ve also each got their own little peculiarities, little details, to set one apart from the other. And you’re walking down the street, and there’s another one, and it’ll probably blow you away, so: go see it!

Come to find out, many are closed on Sunday. That is, the grounds are open, but the buildings are closed. It’s okay; did get to listen to the dulcimer lessons.

Sunday night, they have a “Walking Street”, where they close off the road to traffic (aw, fuck yeah!), and put up a Market. Mostly catering to hippies, but there was a pretty cool band there… …as well as a guy spinning away at the tops he was selling. Back down at the Chiang Mai gate Night Market was a vendor selling pink eggs (or what). Incidentally, here’s how they do construction here (Bangkok too). 3 Responses to Spreading The Disease