Ah, circumstances. In the wake of the tragedy on Everest, the Sherpas have gone on strike, and all those planning to summit are now leaving Nepal instead — sending airline prices into the stratosphere. While my having waited ‘til now to book a flight out will end up costing me well north of $100, the climbers who ponied up sixty-five large, in advance, will apparently not be seeing their money back (not to mention, of course, that thirteen Sherpas lost their lives). So, I’m keeping it in perspective…

Meanwhile, I’m so totally out of the rock/roll musics loop it’s not even funny. But I did manage to notice that Cloud Cult have added Seattle and Portland dates to their current tour.  DO NOT MISS (is my own personal advice).

Another fine morning, hiking amongst the gorgeous gorges and the galloping goats. 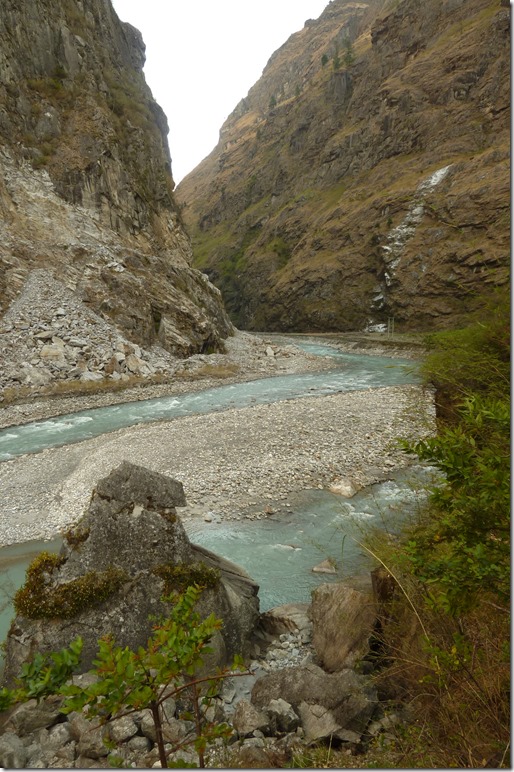 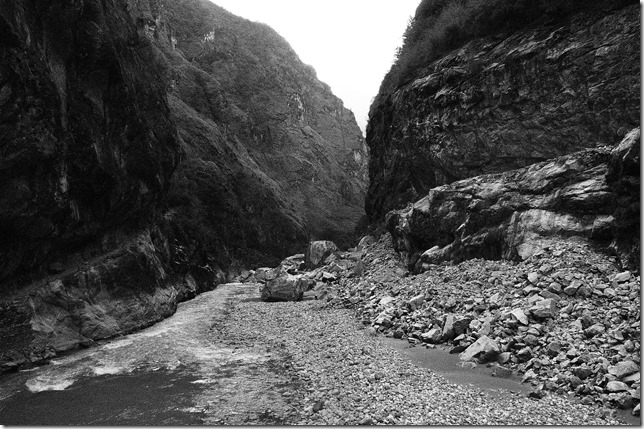 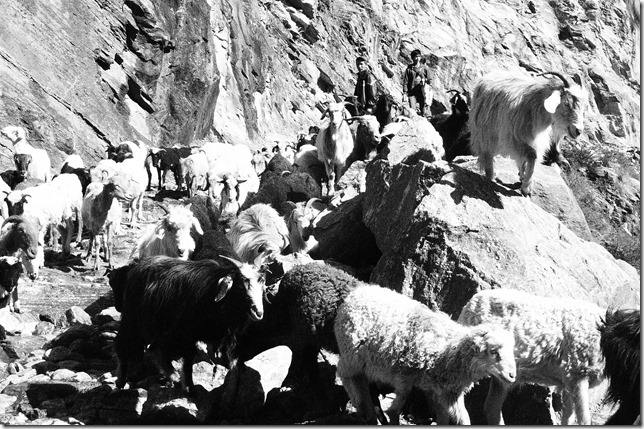 And, oh yeah, one of the best-decorated outhouses ever will you see. 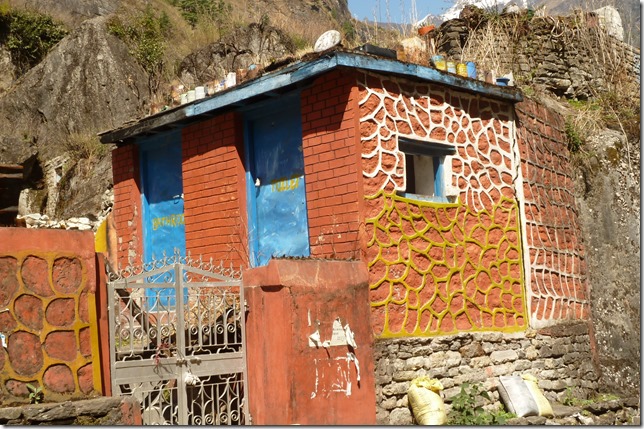 We’d seen only but a few other trekkers the first two days’ travel (though Tal had seemed pretty full upon our arrival the previous eve). After a while we re-joined the road, and steamed into Dharepani and another Checkpost – the first at which we’d be required to show two different permits rather than only one. Here at the Checkpost, there were simply oodles of fellow trekkers. But these soon enough spread back out, and we had the trail to ourselves again. As we approached Danakyu, the scenery began to get truly outrageous. 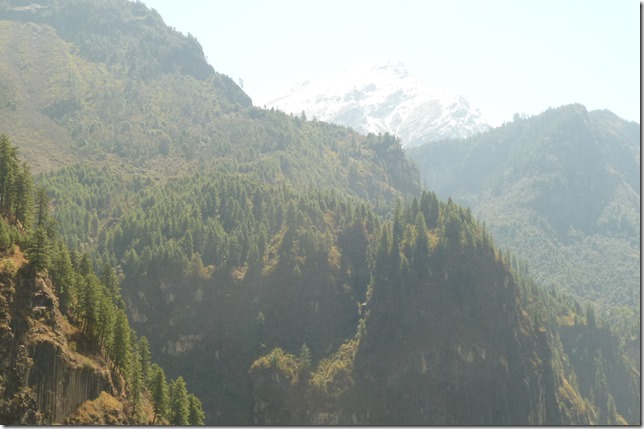 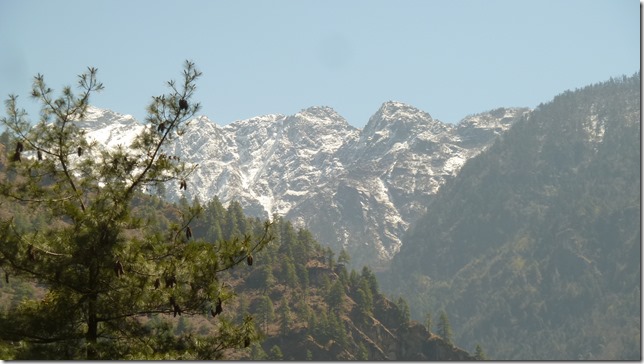 We arrived to Danakyu – our planned stopping point for the day – before Noon. Kieran desired to stop, even despite the early hour, as his feet were bothering him with blisters he’d previously obtained trekking in Sikkim. I was fine to stop as well; but Alex preferred to keep trekking. So, after a goodbye photo… 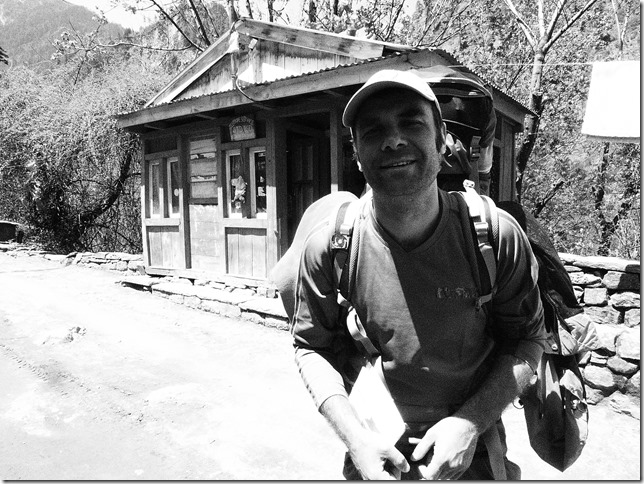 The Russians’ guide had said that after Tal, we wouldn’t see any rain during the days. True to form, this day was right sunny and warm! After hanging our laundries to dry, having some lunch, and watching some lodgemates perform their post-trek stretching routines… 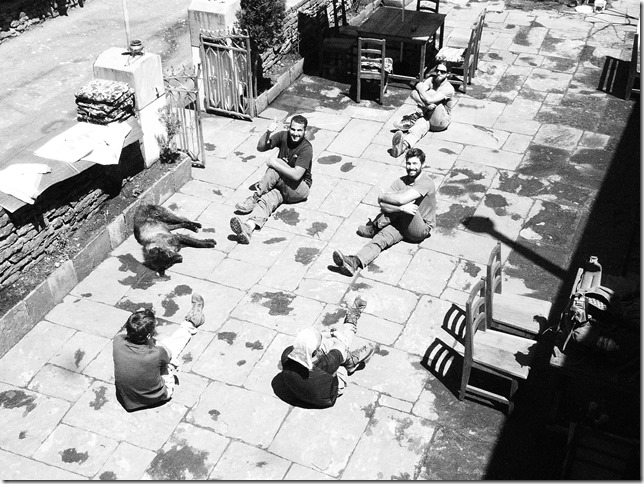 …Kieran and I separately set out to explore the village and its environs. Now, you wanna talk about fucking beautiful; here’s the scene from the entrance to our lodge. Danakyu’s residents are some serious luckia. 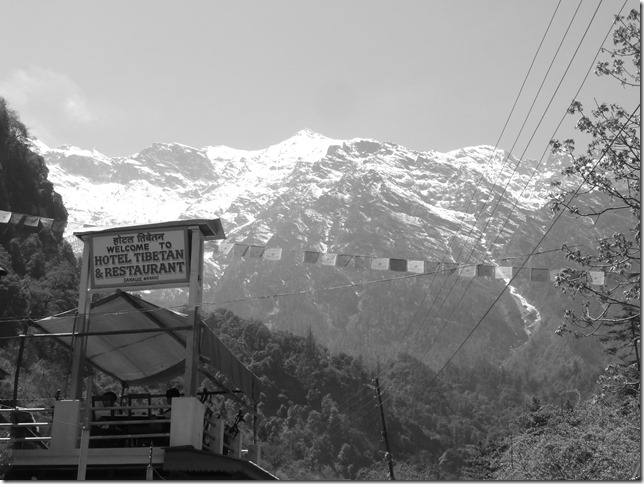 And here are just a few shots from in and around the village. 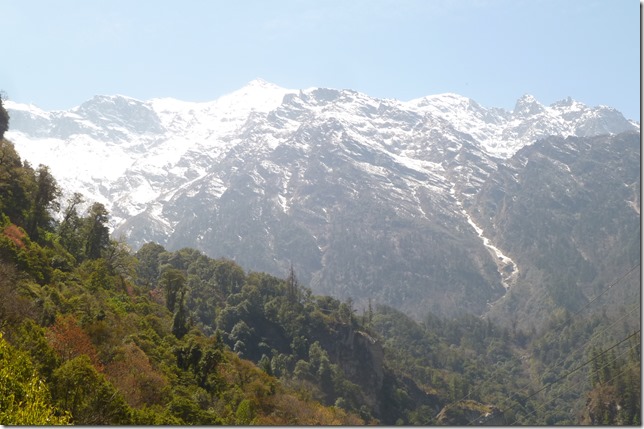 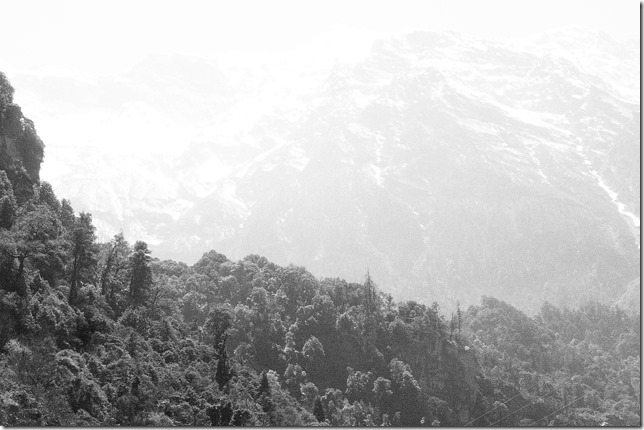 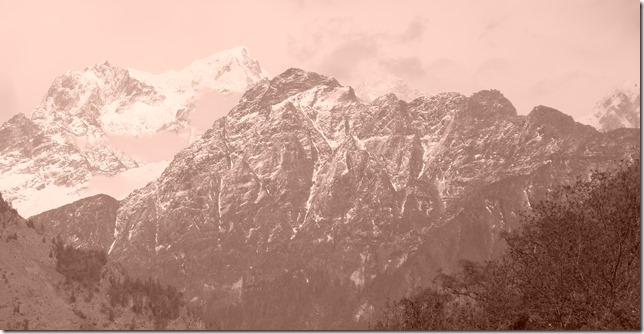 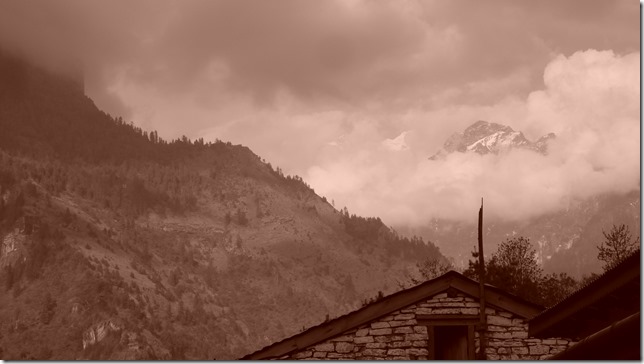 I would say to make sure check out the pics from my Flickr page – which will not only be more numerous, but also viewable in larger size (the latter makes a pretty big difference for these scenes). However, have yet been unable to get any pics uploaded. I will notify you when that happens.

The couple running the lodge here are super-nice (though they weren’t going to light the dining-room fireplace in the evening, until a porter instructed them to do so so that he could dry out his laundered jeans); have been in business for eighteen years. 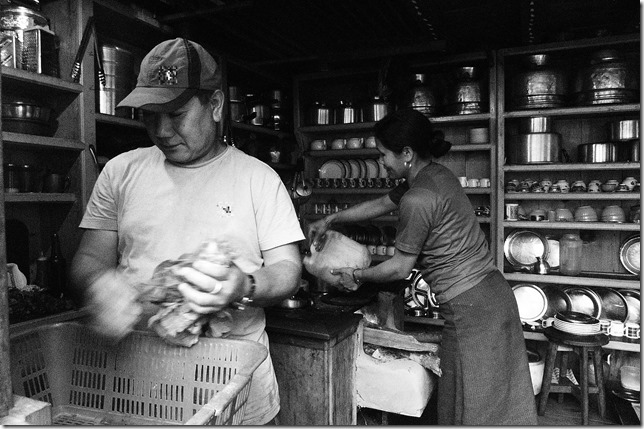 Their grandson, on the other hand, is a holy terror. 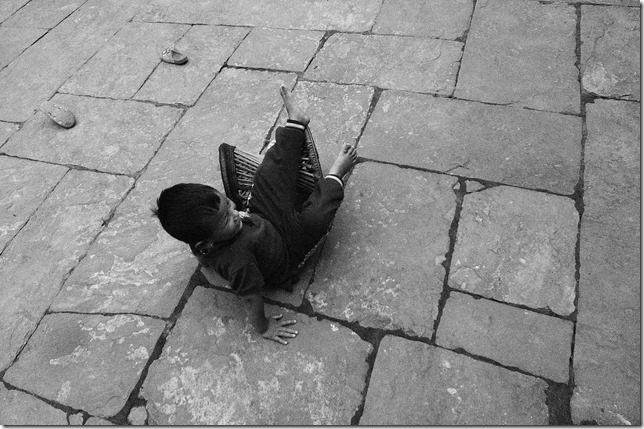 While we were waiting for dinner, Kieran was telling of a mate back home who’d gone and made an eedjit of himself pulling some or other prank (or what). I noted my love of the word “eedjit”, and that I keep forgetting to include it in my lexicon. He agreed that it’s a good word, pointed at the grandson – who at the time had taken all the seats’ cushions and lain them out in a line on the patio; and if anybody grabbed one to sit on, he began to scream bloody fucking murder ‘til they gave it back — and stated, “He is the very definition of an eedjit.” Couldn’t have agreed more. 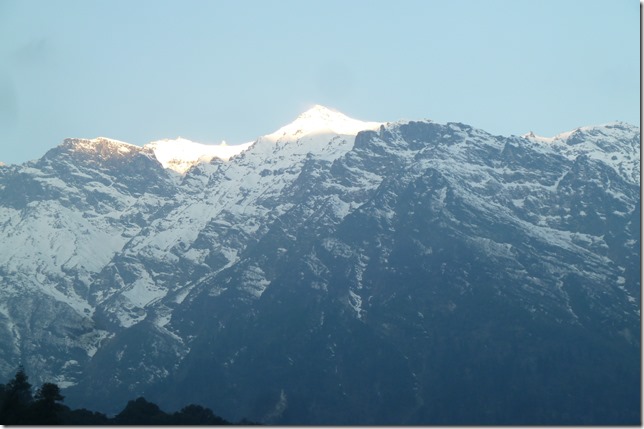 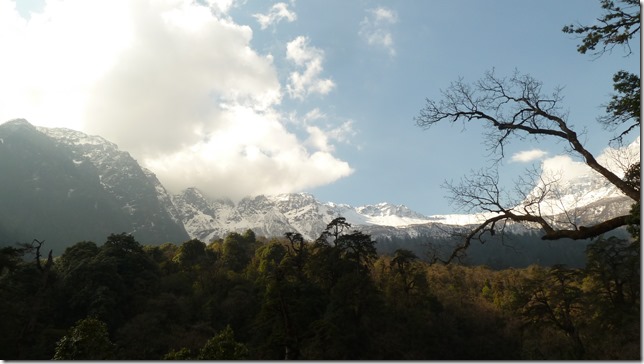 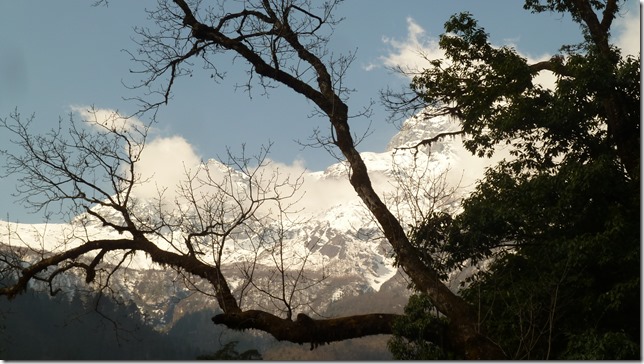 You can see, though, that while these vistas are truly magisterial, clouds were already beginning to set in by 8:20 in the AM. We spent most of the day, it turned out, socked in by the same.

Shortly after passing through Timang, we were joined by an Australienne name of “Nicole”. Her trekking partner, a Brit name of “Eion” (the Irish spelling of “Owen”) – they’d stayed at the same lodge as us in Danakyu – had set a brisk pace, passing us before Timang. A dedicated trekker on many continents, Nicole shared with us some good interesting stories of her travels – including having turned back, due to Altitude Sickness, one hundred metres from summiting the highest peak in South America. She said that people had always since been incredulous at her having turned back so close to her goal; but that, in fact, she ought to have turned back much sooner than she had. 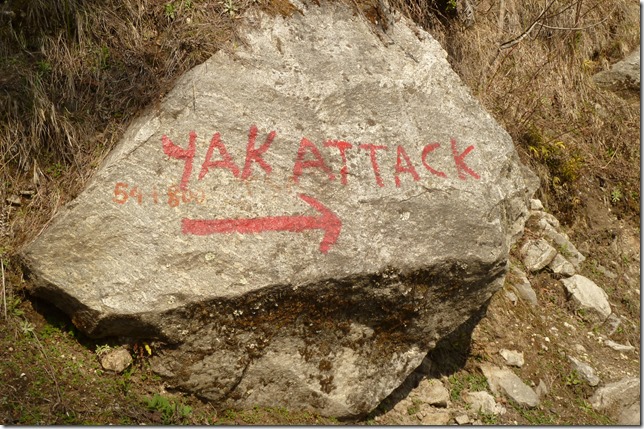 We had been seeing these signs along the way, and wondered if they truly meant what they were seeming to imply. Nicole informed us that, in fact, the “Yak Attack” had been a mountain bike rice that had taken place some months before. Mystery solved.

The copper manning the Checkpost shortly before Chame was a real character. He was totally in love with my shoes. I offered to let him try them on, but they were, alas, too small for him. 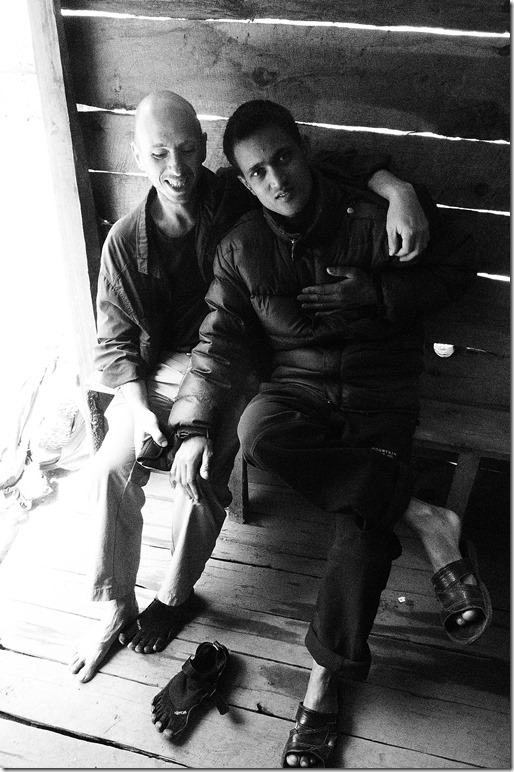 I think he was also a bit in love with Nicole; wanted to take many pictures with her. He kept covering his chest during photos ops, so that there wouldn’t be any images of him bearing his police insignia. This time, he was a little slow on the draw, so I’ve blurred it out for him. 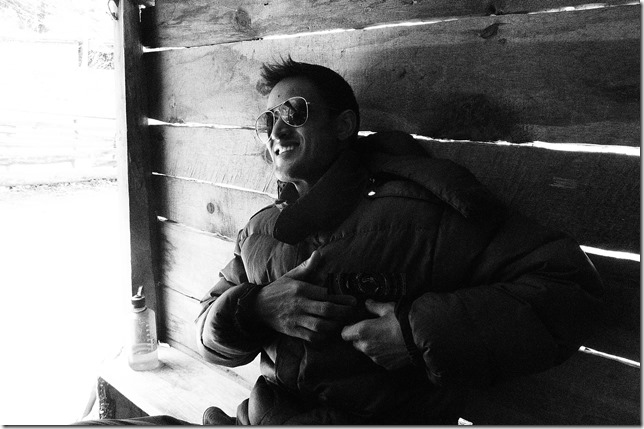 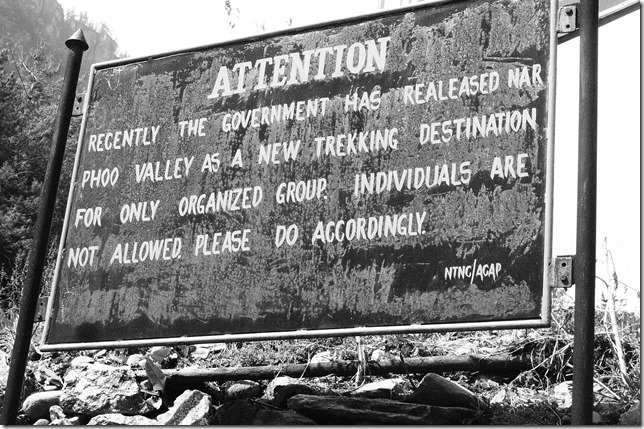 We stopped at a joint in Chame. Alex to have some tea; and Nicole to wait for Eion – whom, we’d informed her, had stopped in Timang to wait for her, not knowing that she’d taken a shortcut, and ended up missing the village entirely. According our map, there weren’t any lodges between Chame and Pisang, we’d intended to stop for the day at Chame. But Nicole, using a different source, assured us that there would be lodging in Bhratang. So we lit out for the latter, Nicole and the freshly arrived Eion staying on to have lunch.

Walking through Chame, I couldn’t believe my eyes: a little shop selling fresh produce, including grapes.  “Holy shit!” I screamed to Kieran’s amusement, looking around for the shopkeep. Eventually she spotted us standing there — she’d been down the path a piece, yakking it up with friends — and came running up to help us. The grapes were pretty expensive, but I sure couldn’t help at least purchasing a kilo (or “KG”, as Nepali vendors — unlike anywhere else in Asia, in my experience — prefer to say) of them. So delicious!

The Ravens here are – as everywhere – entirely bad-assed. 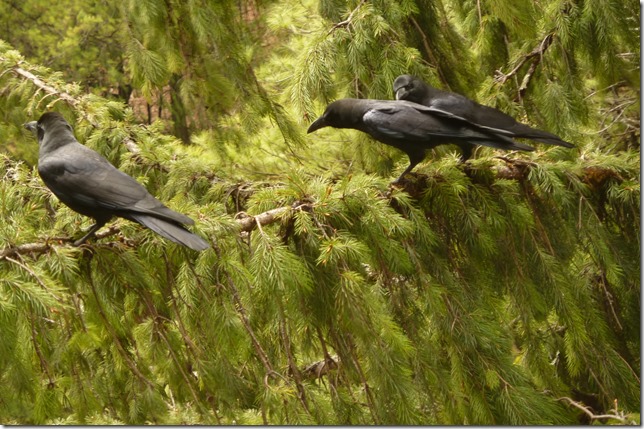 Between Chame and Bhratang, we reached the snow line. Kieran excitedly hopped down the hill to go have a look, while I sat down and enjoying my grapes and the scenery. 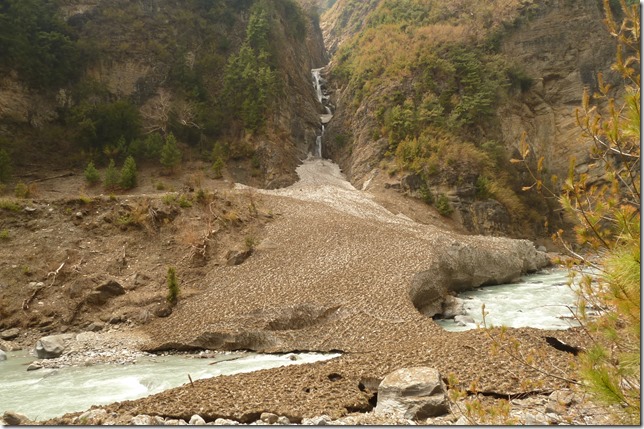 Though it was socked in, the views along this stretch were still pretty damned nice. 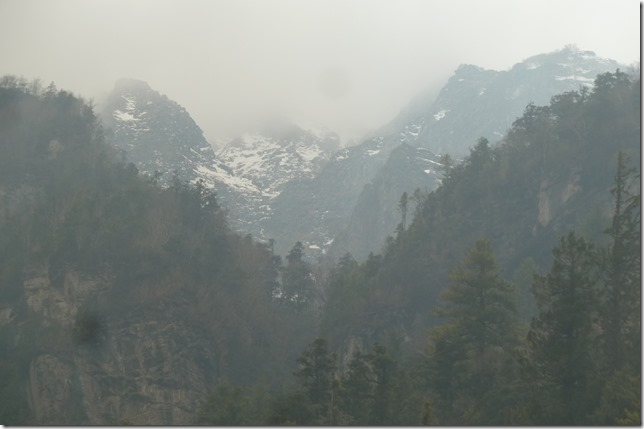 We arrived in Bhratang to find only one building left standing. The others were all smashed-in burnt-out hulks of stone and wood. The one lodge – itself no great shakes – remained intact perhaps owing to its reputation as the purveyor of the finest Apple Pie on the entire Circuit. Or so said not only its own sign, but also the guidebook of a German name of “Julian” who was sitting on the patio waiting to order some up.

The hostess had explained to him that he’d have to wait for her brother, who was then out and about, to return. This he was patiently doing. (I guess those Germans must really love their Apple Pie!) His guidebook also stated that we’d be able to find plenty of lodging in Dikhur Pokhari. It was still quite early, so we figured we’d keep moving on.

No sooner had we settled down, first, for a bit of a rest, than we had a brief reunion with Alex, hiking up the road in his trademark orange jacket, waving merrily. He’d stayed in Timang the night before, raving that it, like Danakyu, had been exceedingly beautiful. He said that the only other people in his lodge had been an American couple who’d spent the whole night long pestering him with questions about Putin and his designs, much to Alex’s dismay. Surely, though, Julian pressed, he must have an opinion? He stated it thusly: Russian teevee is lying; Ukrainian teevee is lying, CNN is lying. So, what else is new?

Eion, and then Nicole, had passed by; and Kieran and myself set out soon after. Alex had ordered lunch, and Julian was still waiting for the wandering brother to turn up and get him some Apple Pie.

After Bhratang, we passed a few characters. These ones, picking many wild mushrooms back in the woods a piece, were great fun to talk to for a while… 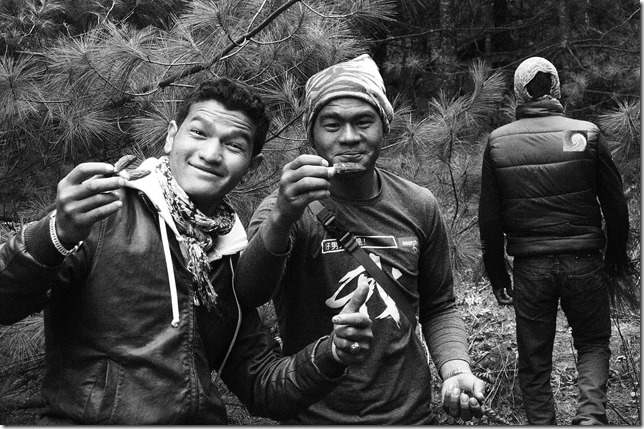 …and this grizzled old guy, repeatedly pointing us in the direction of Pisang. Presumably, his destination was the same. 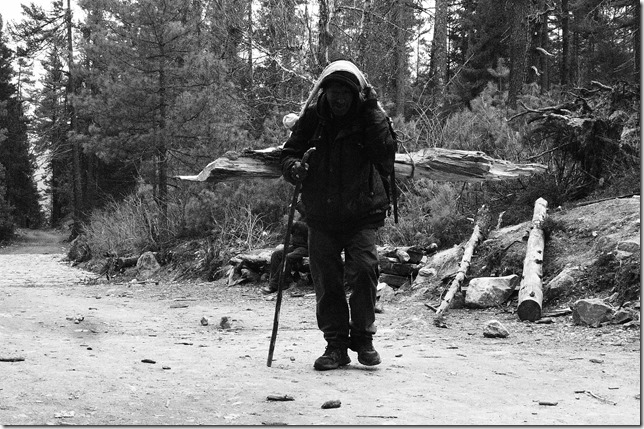 Along the way was this massive rock wall. Picture doesn’t really begin to tell the story; but, believe me, that thing was huge. 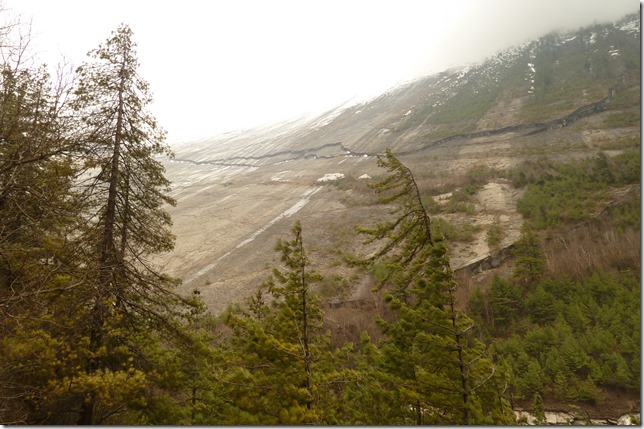 Speaking of huge, not long after passing this monstrosity, we heard a ginormous rockslide about half an hour behind us. Incredibly intense experience; and made us wonder whether it had struck the road (we were later informed by some trekkers who’d passed the site after the slide that it had not).

Kieran was near-to dying from starvation, and so sat down to eat some energy bars. We were joined by Nicole, whom we’d passed not too far outside of Bhratang, and hiked on into Dikhur Pokhari. Nicole was deuce tired, but determined to hike the remaining couple of hours to Pisang. (I had been surprised when she and Eion had said, the night before, that that was their goal for the day – though in the end we’d made it almost that far ourselves.)

It turned out we would be our lodge’s only guests that evening – the village is not even a village really; but rather a stretch of road overbuilt with many spanking-new lodges. We checked in and relaxed for a bit. And then, out of nowhere, it happened: intestinal disaster.

Matters had been proceeding so smoothly in this regard, that I’d not only become confident that I’d be able to make it all the way around without taking sick, but had even begun openly making plans for a return post-monsoon trip ‘round the Circuit when the rivers would be at their raging, roaring peak.

But now, the daily diet of plain Rice, boiled Potatoes, and whatever few Apples I’d been able to find in the villages, had suddenly begun to take its toll. When you think about it, it’s kind of insane: you can get a fucking can of Pringles at every podunk shop, in the teeniest tiniest of villages, all the way up the god damned mountain. But it’s pulling teeth, apparently, to get some fruit – and the fruit in Pokhara is very delicious – hauled up the road, which now stretches all the way to Manang.

Anyways, I had a pretty rough night.

I had thought that I should spend the day resting in Pokhari, then try to take the low route to Manang, and re-connect with Kieran from there. But I felt pretty decent come morning, and thought I’d set out and give the high route a try. If the day’s first sights were any indication, it would be a fine day for hiking.