One reads so much about the beauty of the colours displayed in Indian women’s clothing, and in streetside garment and fabric shoppes. Having admired traditional Pakistani clothing during my years at the restaurant, I was inclined to believe that it would prove to be true.

But during my first month here,  I was much more impressed with the fashionability of the brethren (hot-pink turbans forever!) than of the sistren. Well, truthfully, one doesn’t always see so many women out and about – except in Delhi, where they’re almost all wearing Western-style clothing.

Arrive in Jodhpur, however, and the famed explosion of colours is in full swing. Not only this, but the delicate and gorgeous material, and the out-of-this-World patterns make for a most appealing melange. Plus how do they keep their clothing so clean and bright amidst all the dust and cowshit and garbage lining every street? It’s just so, so, so impossible to do the experience of the Jodhpur bazaar – where the eye-popping outfits are flying by in the scores and dozens per minute — any kind of justice that I don’t know why I even bother trying. But, okay, here’re a few shots. 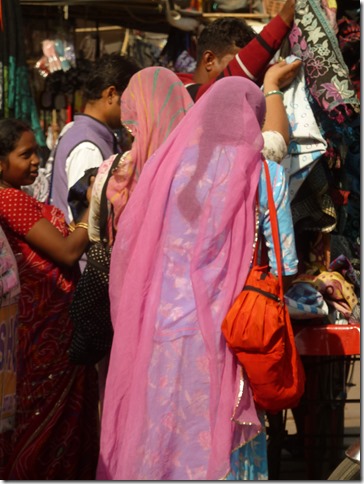 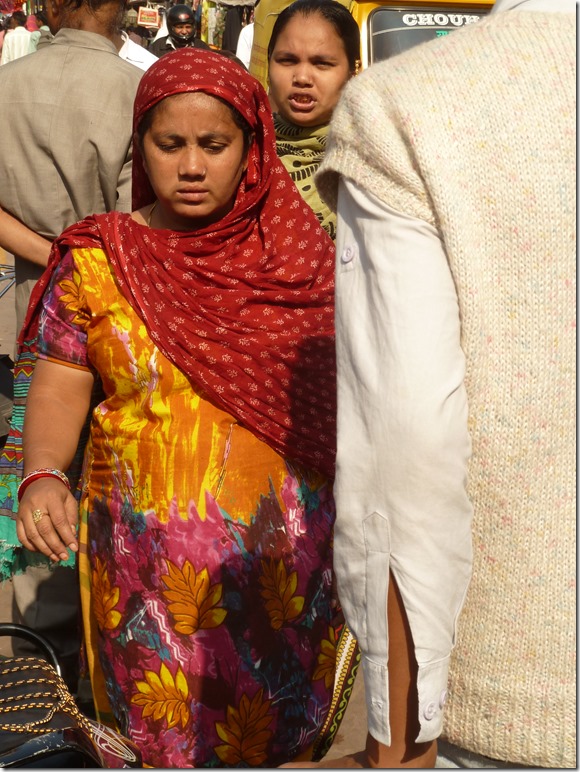 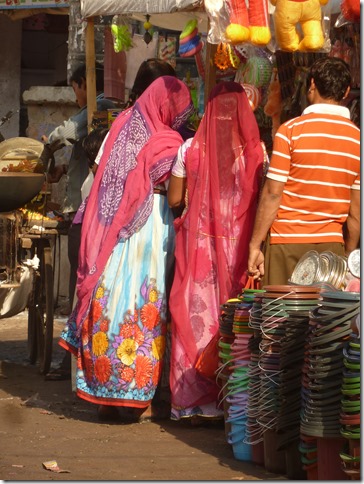 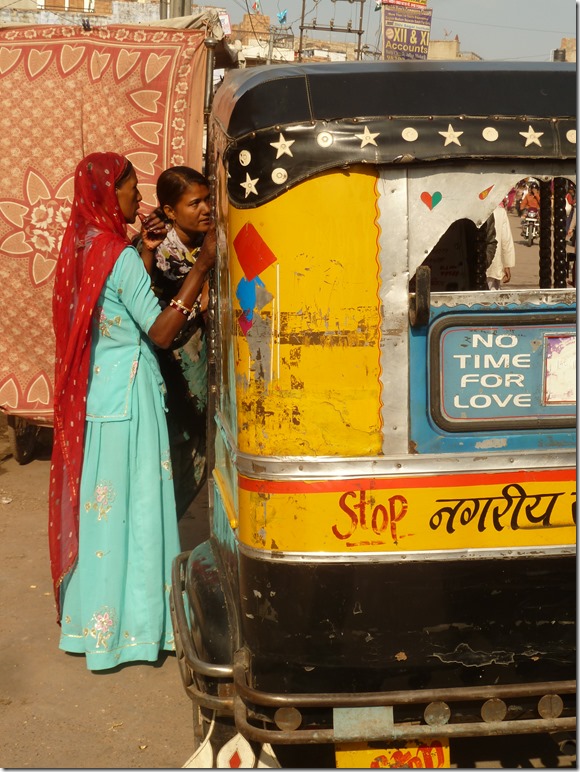 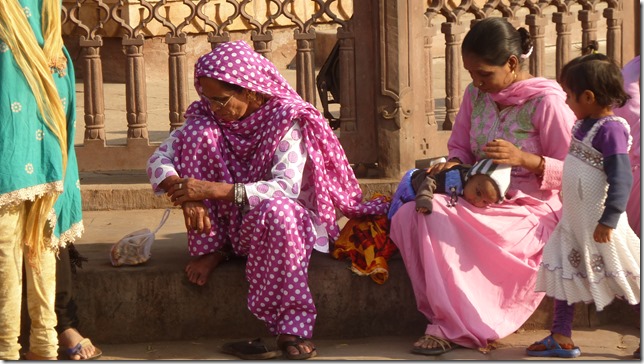 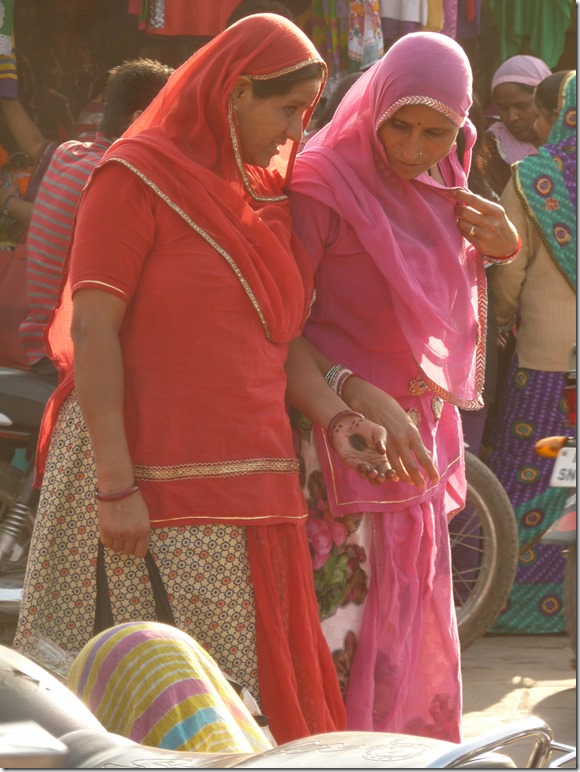 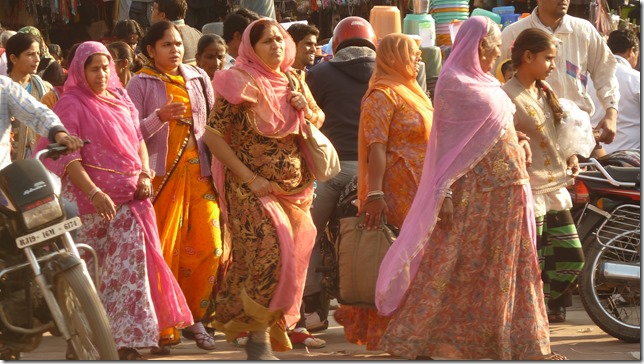 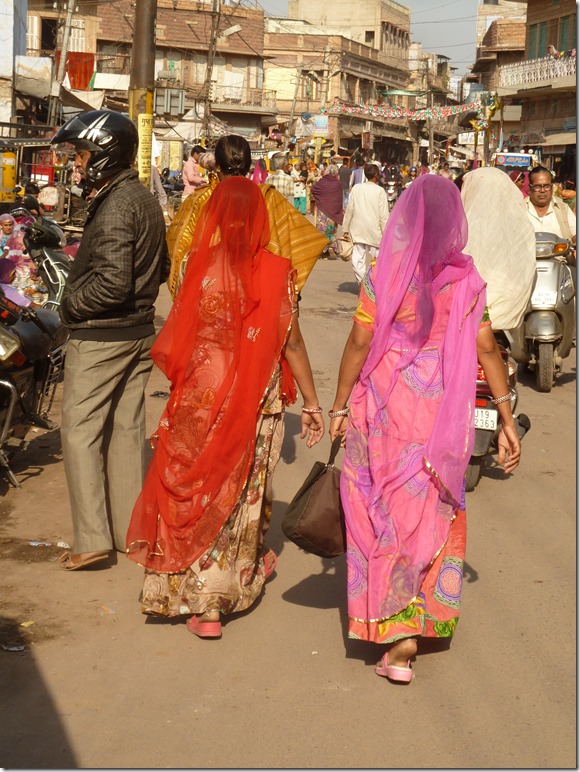 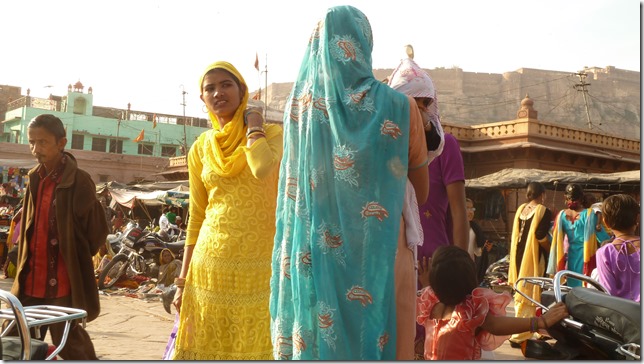 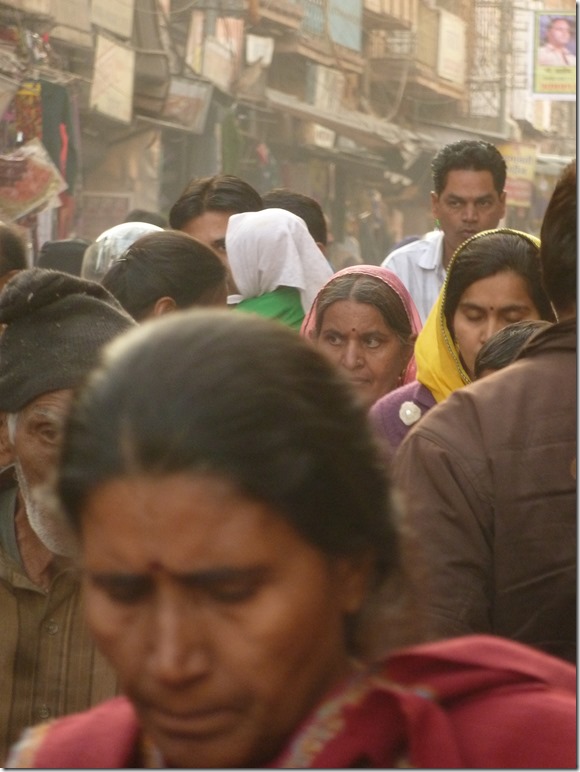 Oh, and let’s at least get in one of the fellas; this guy rocking the finest turban/moustache combo I’ve seen. (The competition in this category couldn’t be more keen.) 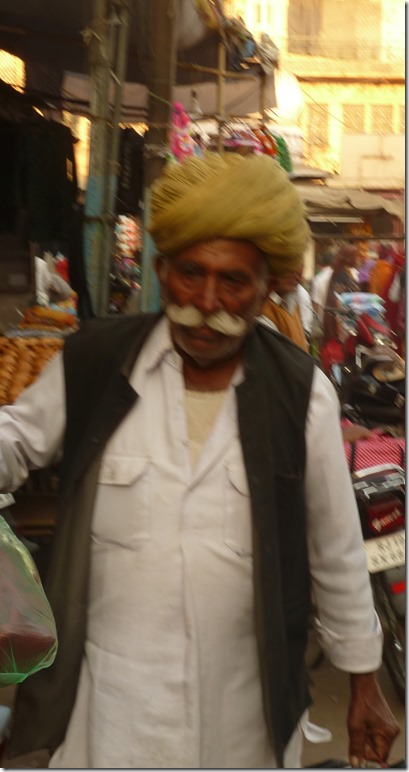 Now to the young (and young-at-heart): Those Jodhpurians, mentioned in previous post, soliciting for their photo to be taken. We could begin with this touching scene, which I happened upon one afternoon out for a stroll in the Old City. 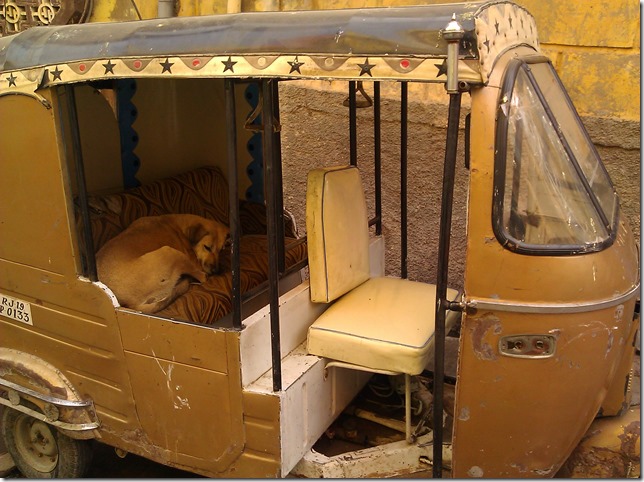 Two dudes seen me photoing the dog, and wanted to know why – why would I do such a thing? “Because it’s a beautiful moment!” I pleaded. After pondering my argument for a little while, they agreed that it was such, and requested to be a part of it. Me, am always happy to oblige such requests. 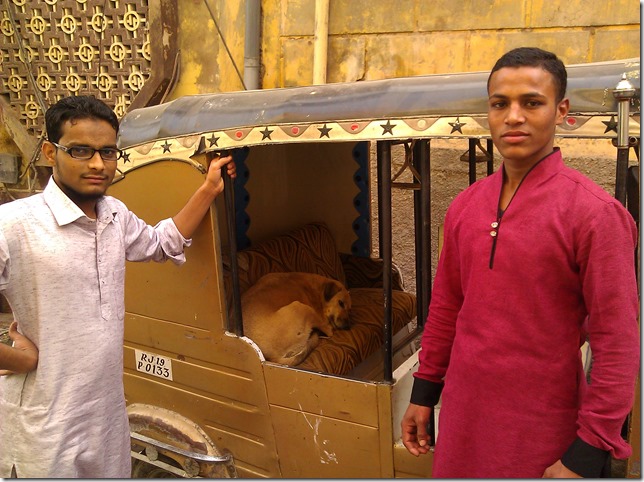 The story behind this photo… 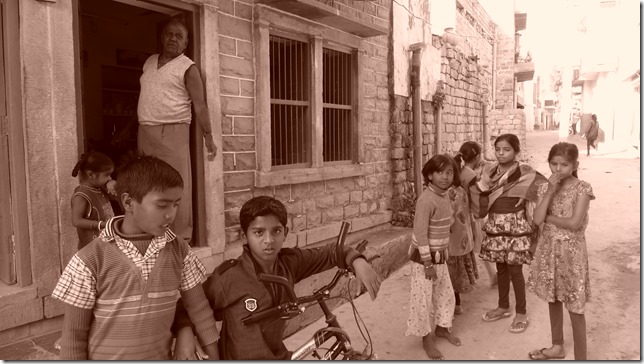 …is that I was halted in my tracks by the astounding beauty of the music coming from out of this house, so thought to record a clip, with which to hopefully later put an ID. Soon the owner of the house came out, and then the kids all came a-running, begging to be captured alive in photographic ones and zeros.

It took a few shots before they were finally satisfied with the outcome. But that were nothing compared to these next kids’ insistence. I’d spied this Muslim festival going on one fine Sunday, and noticed that the vehicles in the parade were all proceeding in reverse. “That’s odd,” I thought, “I’d better go take some footage.” But as soon as I tried to do so, the kids swarmed all over me begging to become immortalised for their selves — never mind my own particular designs.

And every time I’d complete a shot, they’d beg and beg for just one more – ignoring their colleagues’ pleas for even a first shot. It was great fun, at first. But, finally, it was just too much of a madhouse: I couldn’t even make to leave until some guys in their twenties stepped in to help free my self of their demanding clutches. Well, they wanted to be famous; and, now, if you see their likenesses, I guess they in some sense are. (Never realised until now how many shots the boy with the burnt-orange turban managed to finagle his way into…) 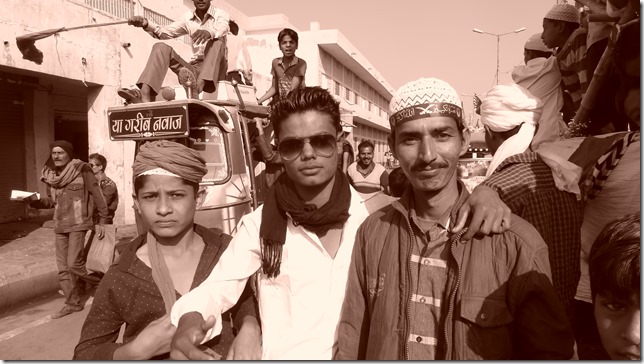 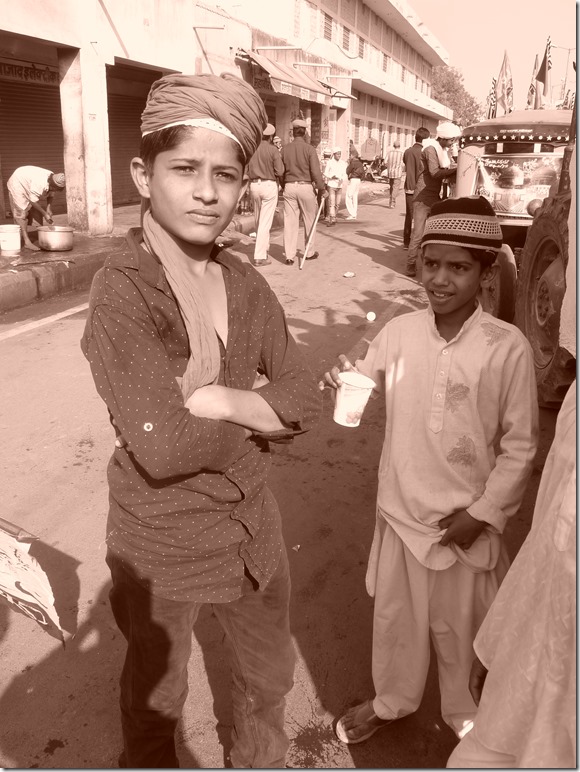 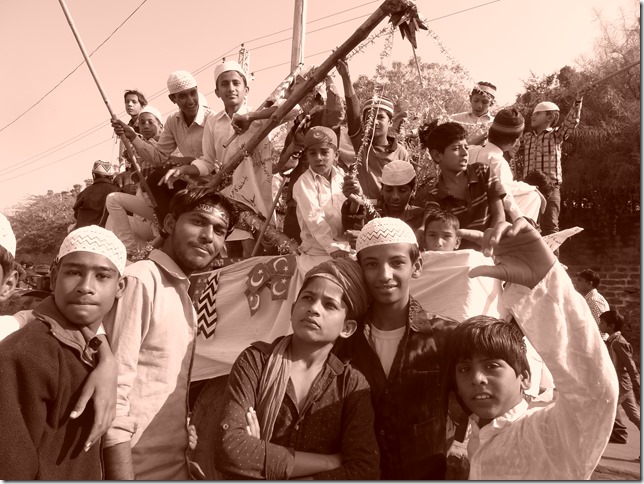 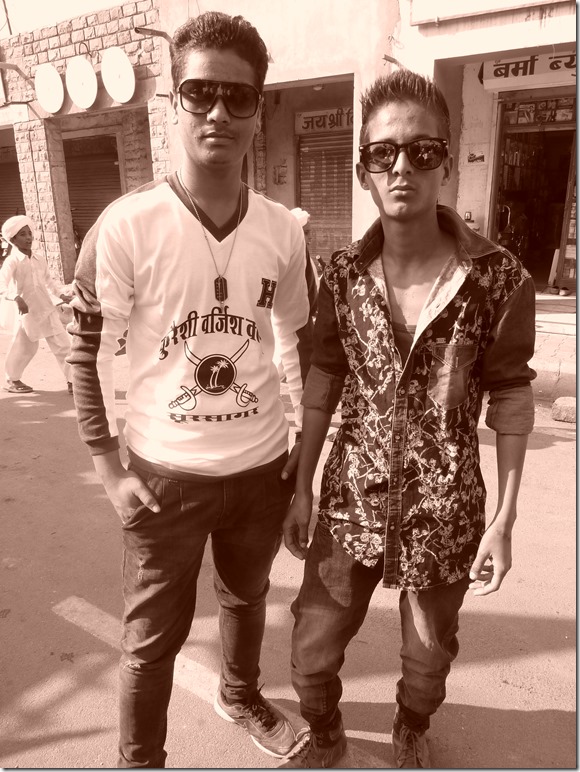 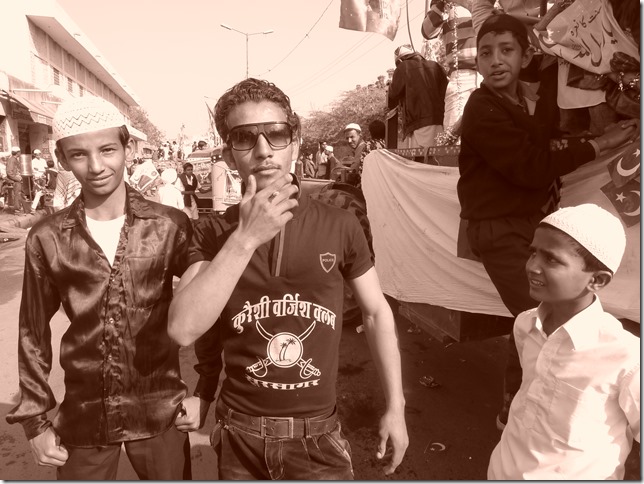 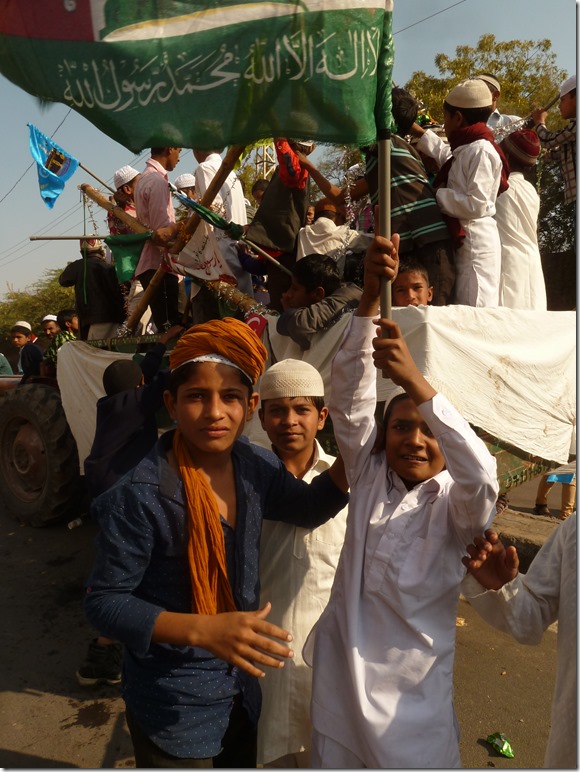 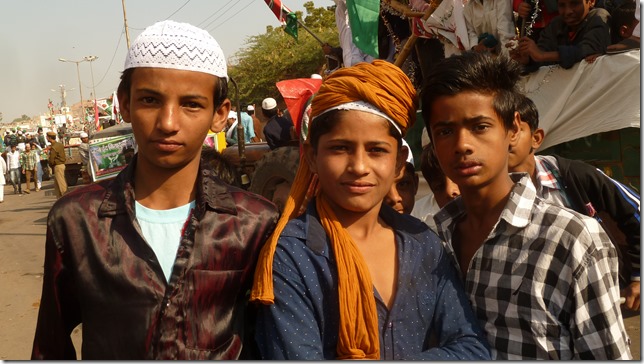 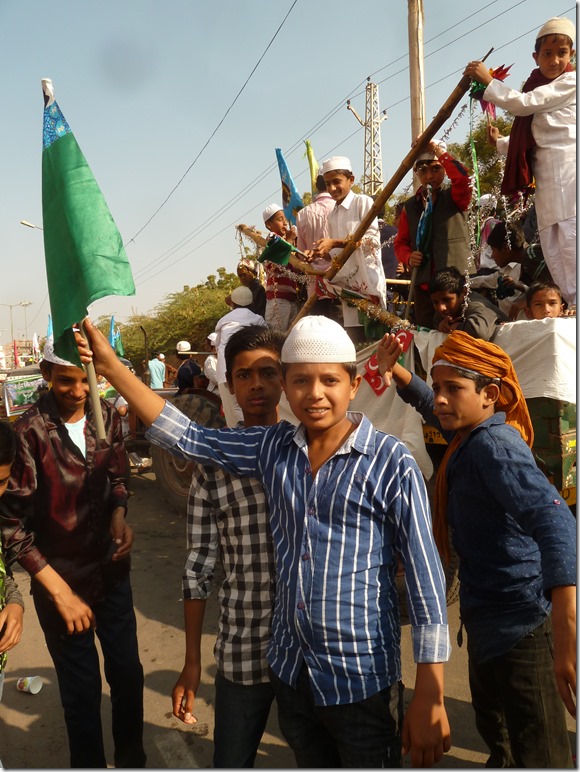 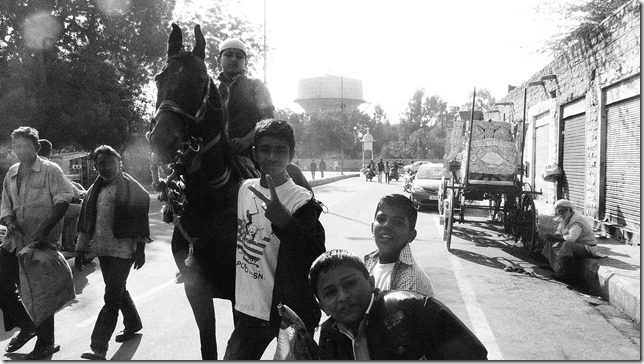 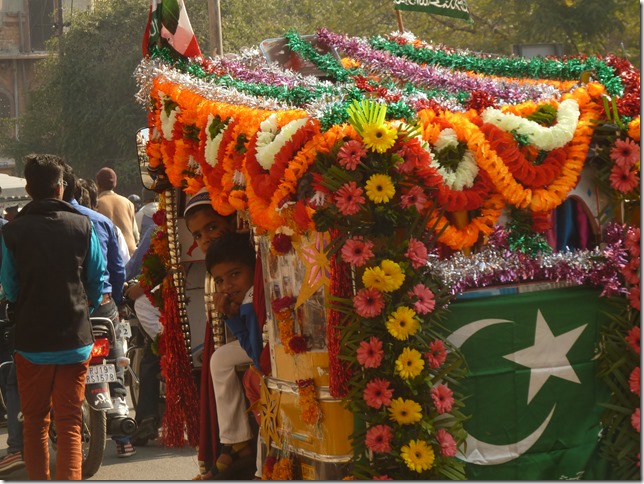 And a few hours later – same festival, different part of town – you can see many of these participants are happy to be featured as well.

And here are a few more whom (more politely, I dare say) solicited the lens’ soul-searching gaze. The broadly smiling gents in the last shot are just the best. I’d wanted to snap their pics while I was walking by; but some days I’m more shy about asking than others, so instead I, on this occasion, just smiled and said hello. I was well past when they called me back and asked to sit for this photo. I guess they just knew what great subjects they’d make! 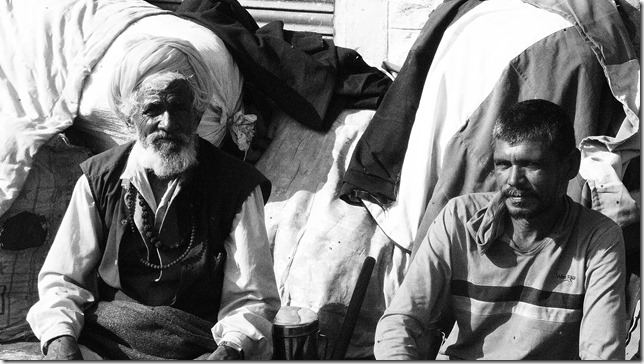 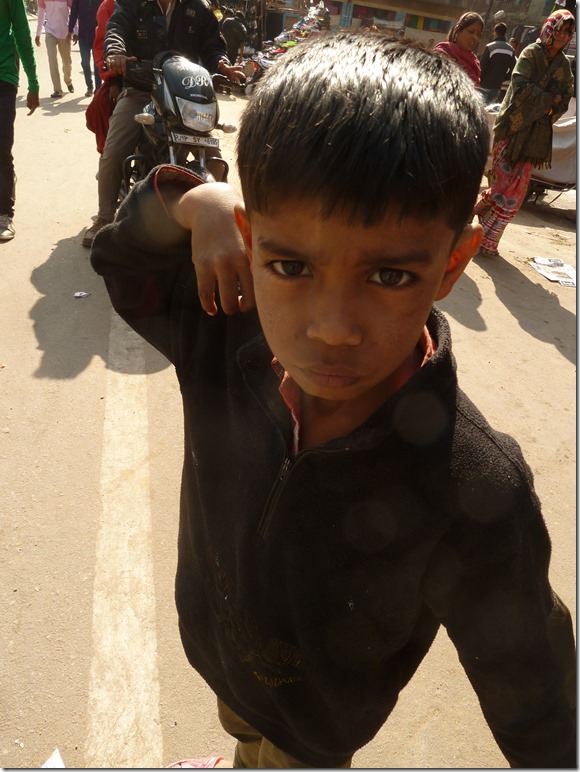 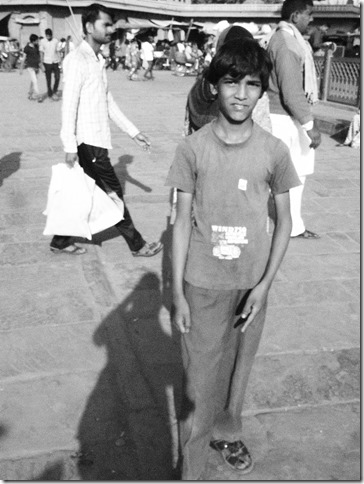 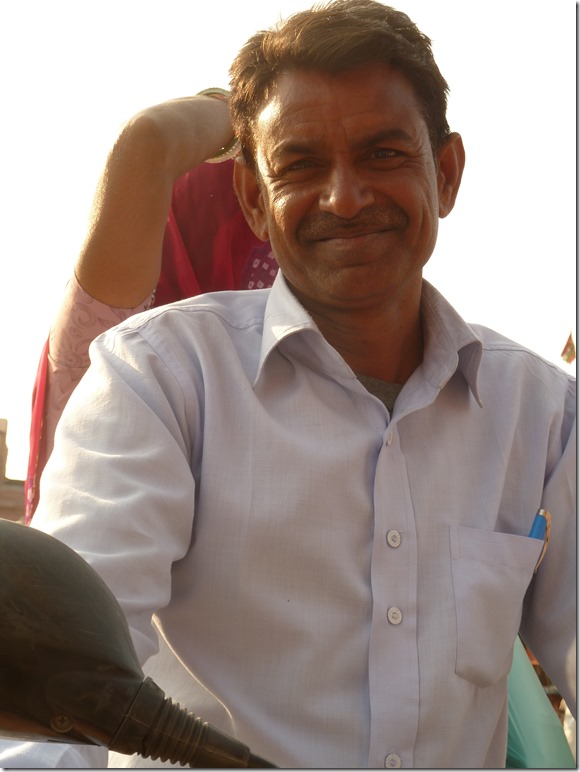 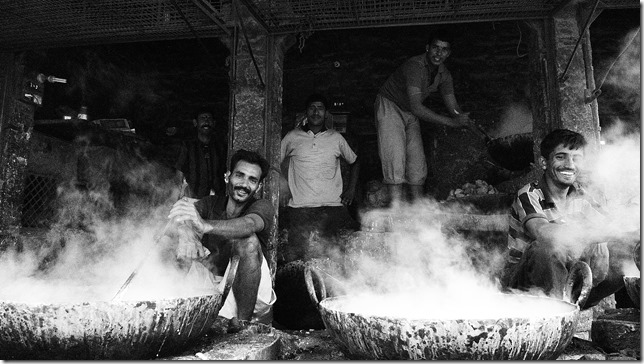