[dc]T[/dc]hough the GTF doesn’t officially get underway ’til Friday, the city is already exploding with activity. Almost literally so, in fact: the Muslims have for several days been lighting off fireworks ’round-the-clock in advance of the end of Ramadan (I believe that to-day was the last day of fasting); and in the Chinese areas, the streets are ablaze… 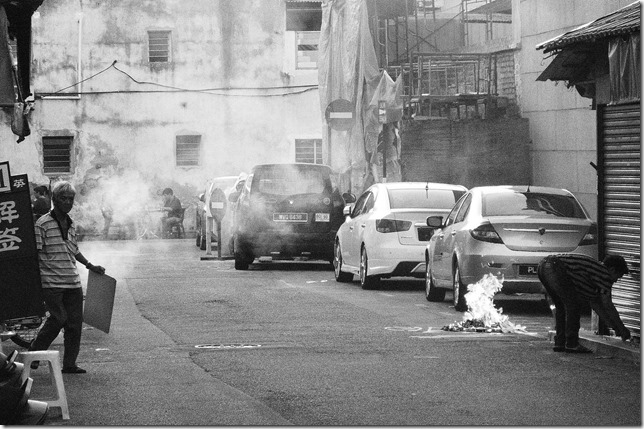 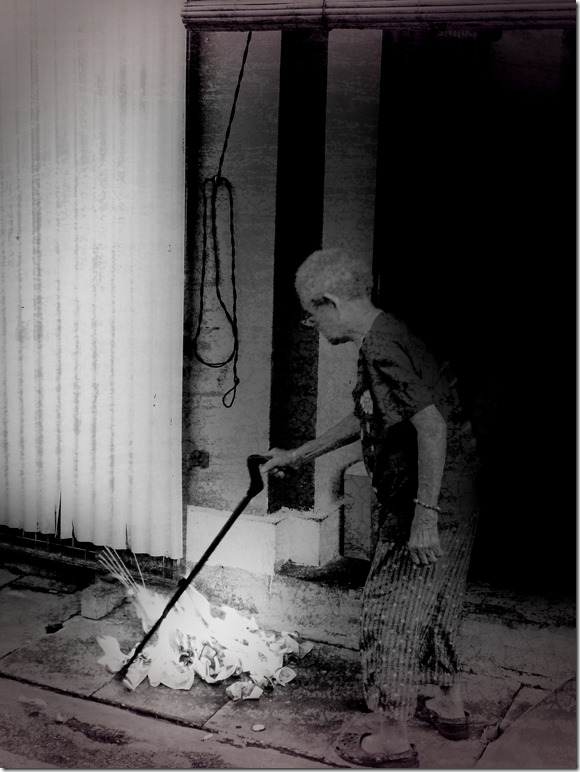 …in observance of the just-begun Hungry Ghost Festival. Here’s a amusing explanation of the latter:

Well, the gates of Hell are about to break open and hordes of demons will need to be appeased with song, dance, and food for the seventh month of the Chinese Lunar calendar. Yes, it is the Hungry Ghost Festival, widely observed (celebrated) here in Penang, Malaysia. This year (2014) the festival starts on the 27th of July and will run for a whole lunar month, ’til the next full moon on the 24th of August. […]

The story is that the gates of hell open up for the souls of Chinese ancestors to come to earth to wander, to bother, and to eat. The living honor the dead — and appease them — by burning joss-paper and papier-mâché material goods, like houses and clothes.

Chinese opera stages are set up and loud performances run through the night for the hungry ghosts. For many a foreigner trying to sleep near these monstrosities, this highlights the Hell-on-earth aspect of the festival.

As always seems to be the case with these big Chinese parties, they’re balls-to-the-wall over this thing. I mean, see how extravagant these “makeshift” structures – and I’ve lost count of how many of them are popping up all over town – are: 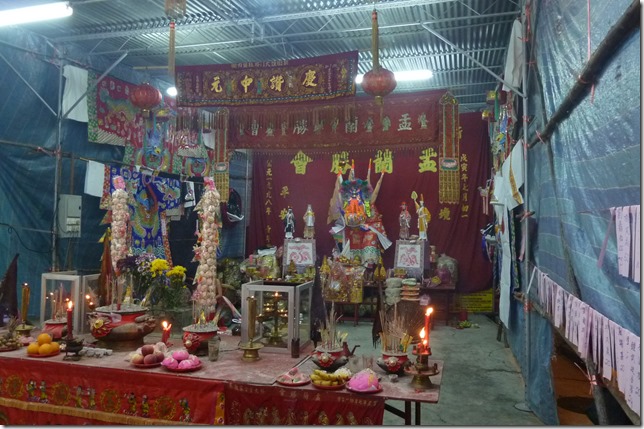 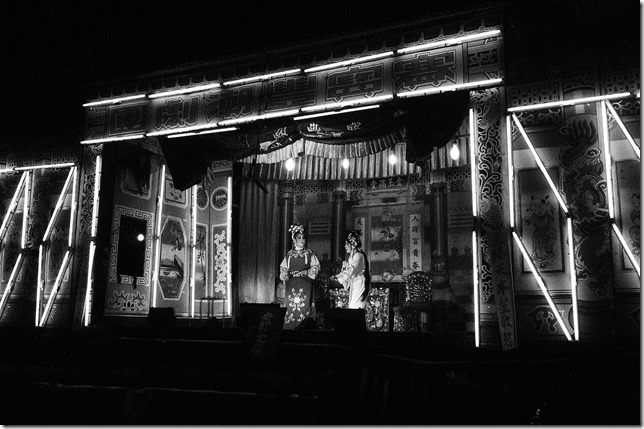 The performances are, to my way of thinking, unbelievably elaborate — there’s also a live band in the wings, and there are hammocks strung up beneath the stages for the performers to hang out in during the day — considering that they play to about a dozen people at any given time. If I understand correctly, they run continuously from dusk until dawn every day for the entire month!

The costumes and staging are deuce impressive… 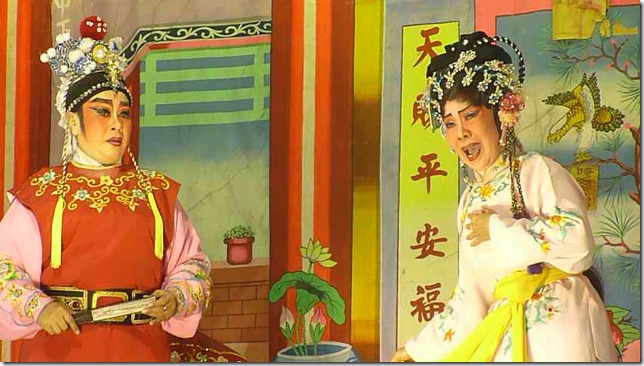 …though you’d think they’d realise that placing a loud ‘n’ stinky generator ten paces away from the stage detracts from the ambiance (to say the least). But, actually, maybe not.

Recently, I have learnt a new terminology (though the concept is basic enough): “Ceaseless Immersion”. The premise is that when one lives all one’s life in conditions which an outsider would find unbearable, one does not even notice it. But also: after about six months’ time, the outsider too becomes “ceaselessly inured” (to, I think, coin a phrase), and fails to notice the offending conditions any more either.

I can flat guarantee you that no amount of time would ever suffice to inure me to the horrific din and stank that is the tyranny of the Asian cult of the motorcycle. But to the Asians themselves, it’s clearly not even in their book. Well, I guess in the interests of Science and all, I should go ’round asking people in the audiences if they notice the fumes and/or the roar emanating from the generator.

Dude on the left here was painting Chinese characters all across the top of this very lengthy and painstakingly stitched banner whilst his partner gave ’em the old quick-dry. Gotta love Chinese festival-times. 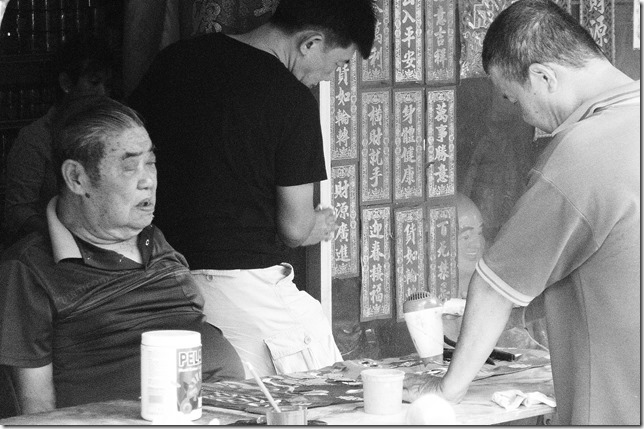 By the way, would you wait in a long line like this — during the baking-hot middle of the day, when the sun is in absolute Beast Mode, as it’s usually been of late – to get your picture taken with this mural? 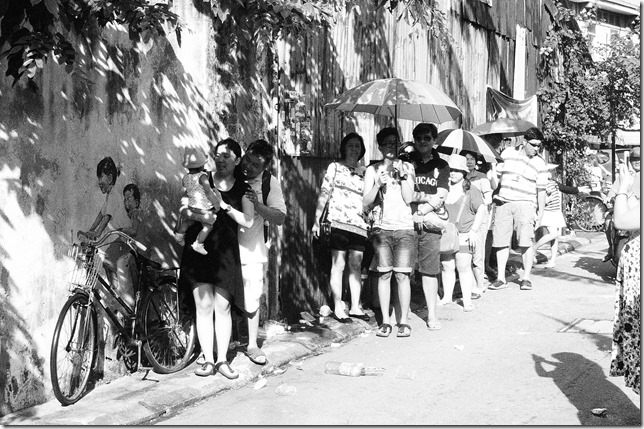 This is one of those murals I told you about before, which were commissioned for the 2012 GTF. It’s not only the most popular, I wouldn’t be surprised to learn that it’s become the single most popular photo-op destination in all of Asia. The line’s longer than usual because of the holiday, but there’s always at least somebody getting their photo-op on, and almost always a waiting period. In case you’re wondering, most of the murals are in this style: the 2-D characters “interacting” with the 3-D object which has been permanently fixed into place.

Speaking of long lines, remember that Ice Kacang stall I put a clip of when I first got here? This one here…

Turns out, which I didn’t realise at the time, that Ice Kacang is one of the more sought-after of delicacies on the island; and when I walked by yesterday – the first day of the Festival – the line was incredibly long. Like, okay, not as long as for a big film premiere (or what), but long enough that some goofnut had taken it upon himself to go out and entertain the people there waiting. If you would wait on line to get your picture with the bicycle mural, would you wait forty-five minutes, in the same baking sun, for a bowl of ice cream?

[dc]O[/dc]kay, meanwhile, the Japanese community were treated to an enormous fireworks display to call their own in conclusion of last weekend’s Bon Odori Festival. 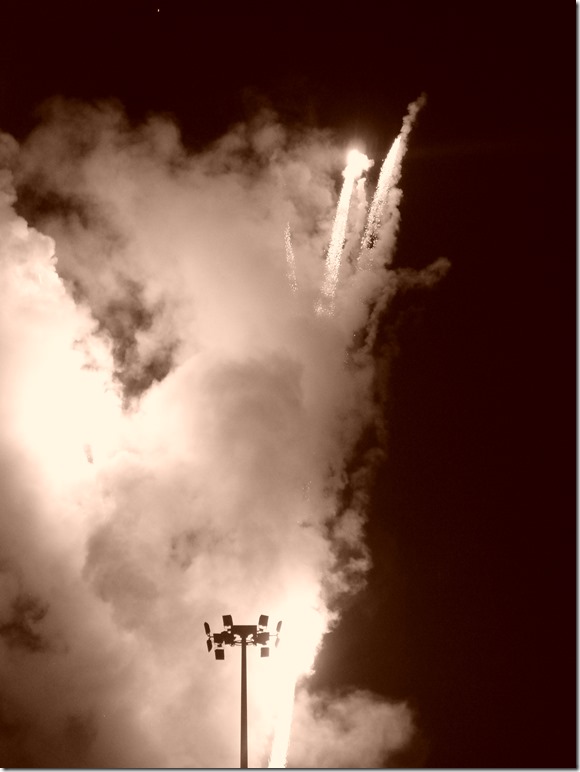 Hang on, Penang has a Japanese community? First I’d heard tell. But I read or heard somewhere that it’s the biggest Bon Odori celebration outside of Japan – and the announced attendance was 50,000 souls! Who knew?

I swear, Seventeenth-/Eighteenth-Century Penang was just a right straight big/huge, enormously powerful magnet, sucking in all comers from throughout the Indian and South Pacific basins. Having put down roots, here they all now commingle, in this rather small space, as happily and heartily as a giant Banyan grove. It’s a beautiful thing.

I kept wondering how it is that more less every person on the island speaks at least a little bit of English? But just recently it struck me: Of course, it’s because there are so many different ethnicities all living together here that they need a mutually intelligible language to keep everything on the straight and narrow. Lucky for us tourists Penang’s dirty, nasty Colonial Overlords happened to have been of British persuasion…

They brought a troupe in from Japan to entertain the good people. 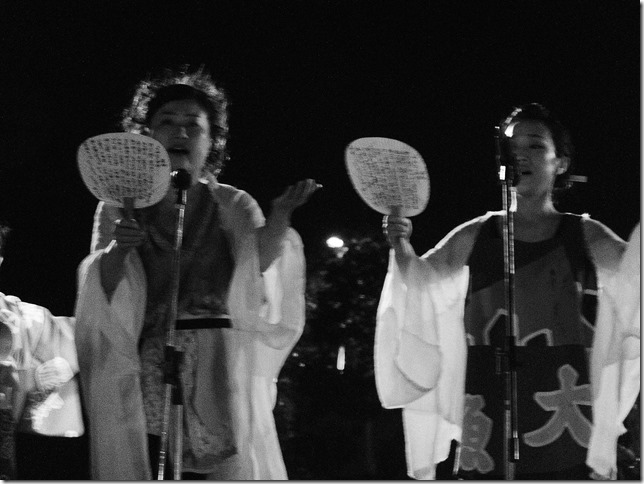 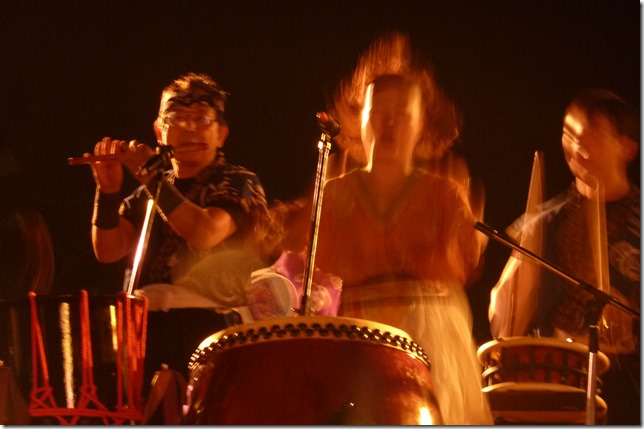 The performances were very good…

…but this group of Malaysian Japanese-language students nearly stole the show with their routines.

That’s some kind of intense language programme, if you gotta learn the dance grooves as well! 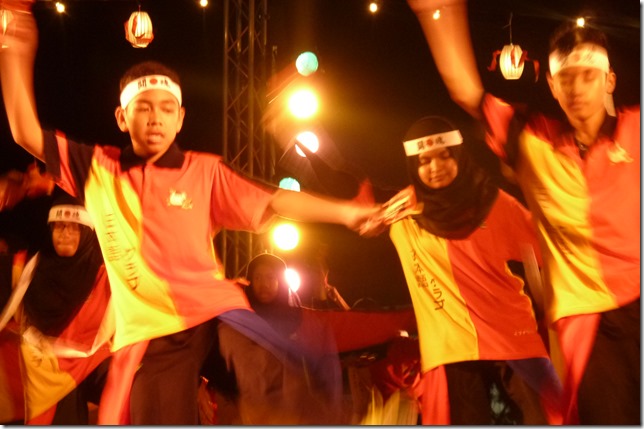 [dc]S[/dc]o GTF has a little year-round weekly mini-fest, Occupy Beach Street, where a bunch of city blocks are closed off to traffic, and the people show up to do culture. 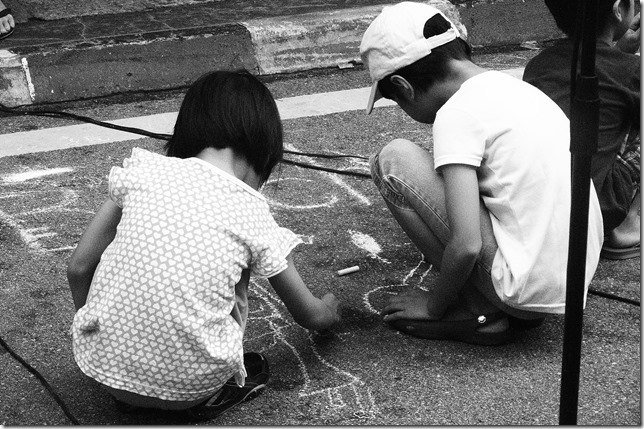 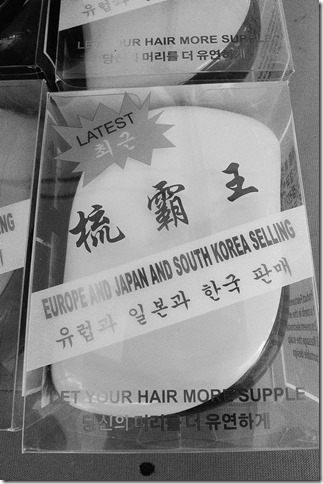 Yesterday’s had a pretty good band, whose songs are exclusively about life on this island.

Even better, though, some festival programming has already begun – including a fantastic career-spanning exhibition of one of Penang island’s most famous, photographer/graphic designer/illustrator/painter Ismail Hashim, who passed away last year.

His signature technique was hand-tinting his black-and-white photos with coloured inks. 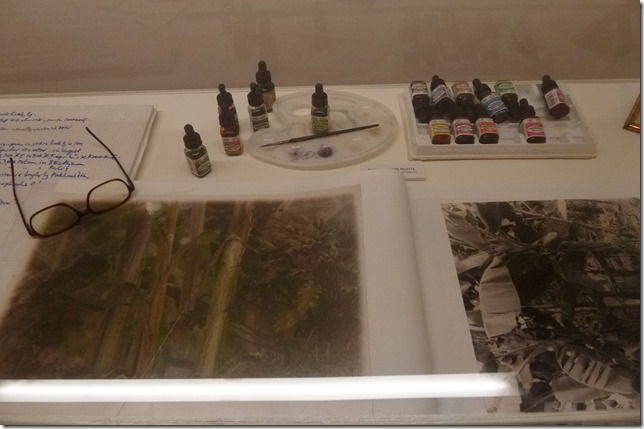 The results were pretty great, I found out… 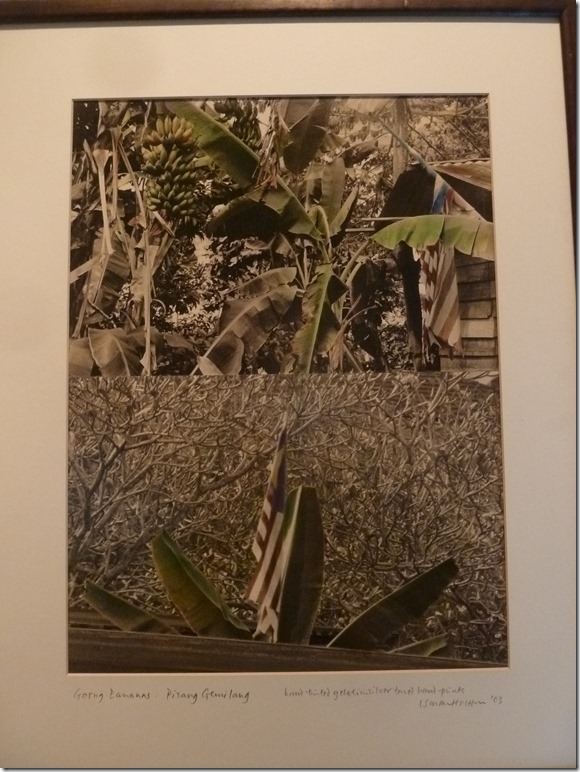 …and because the prints are unique, they fetch large sums. Even more stunning, for me, is a series of portraits all taken from behind and doctored-up with liquid paper (or something similar). Looks really incredible in person! 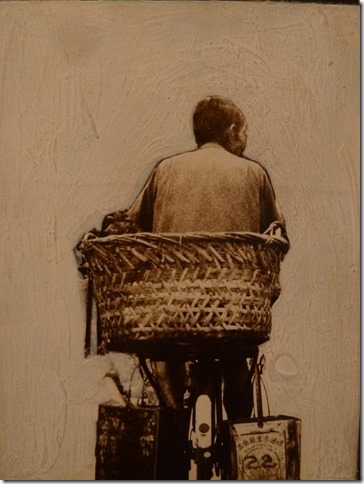 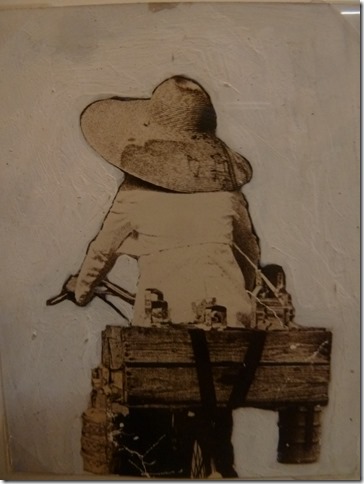 A few of many favourite images from the show are as follows. Need to get my dimpled ass back there to check out the reading materials and the coffee table book of his work… 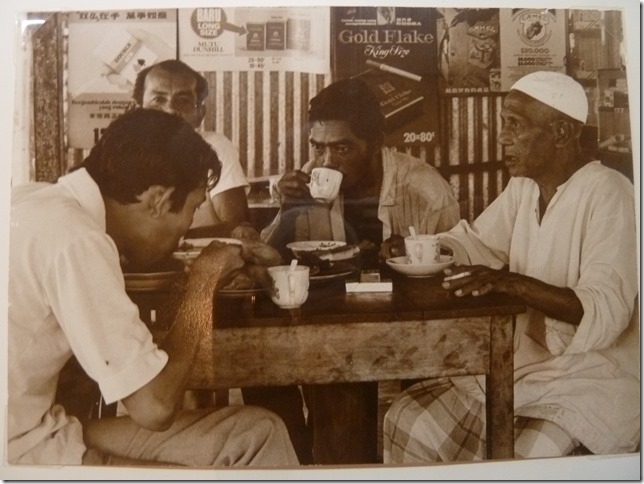 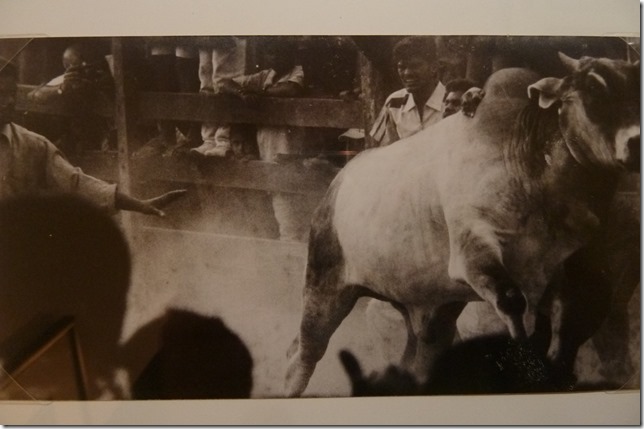 [dc]S[/dc]o you see, Penang is more than just Durian. Indeed, the King Of Fruit’s availability has taken a precipitous nosedive just in the last two or three days, and it’s kind of freaking me out. The season is ending right when they said it would, it appears – but I’ve never been here when Durian weren’t in season, and can’t imagine how people get by day-to-day when they’re not. I’d been hoping above hope that somehow the season could magically extend itself, but I can now see that my hopes/dreams were a fool’s paradise: the Durian season is going to end on shed-ule, and I’m going to be left here holding the bag.

But no! There is life after Durian. George Town right now is a massive heartbeat… 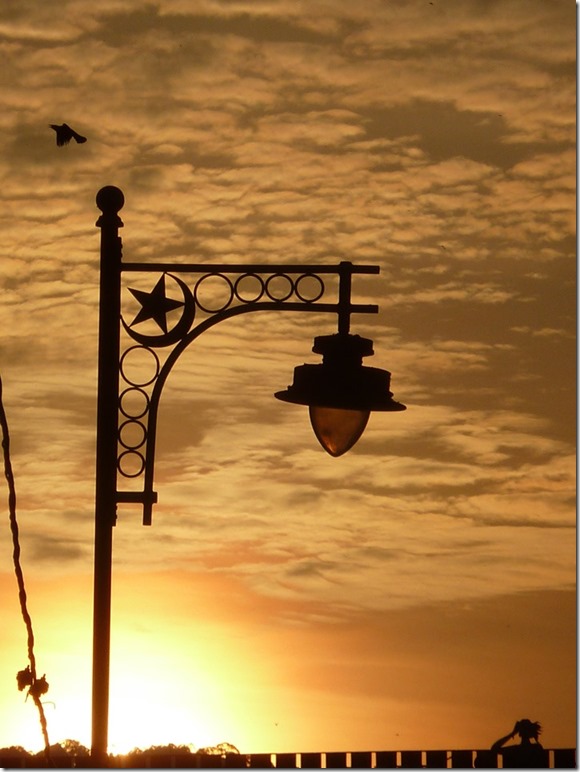 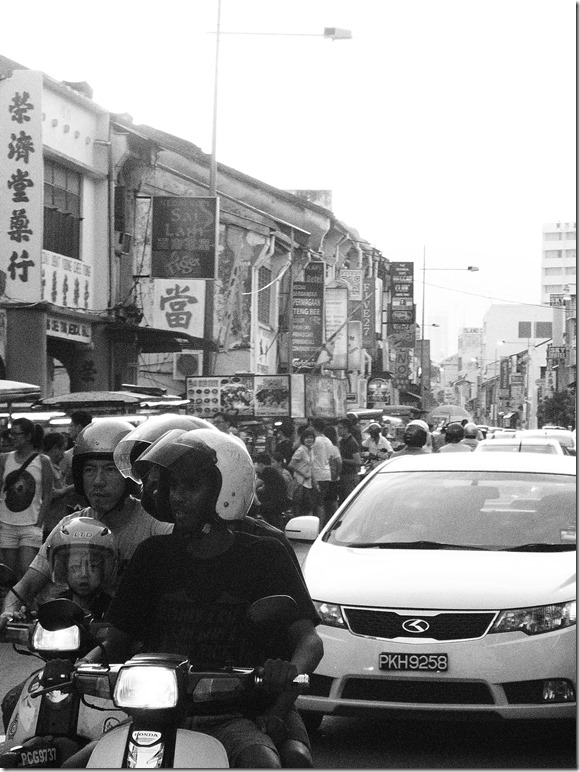 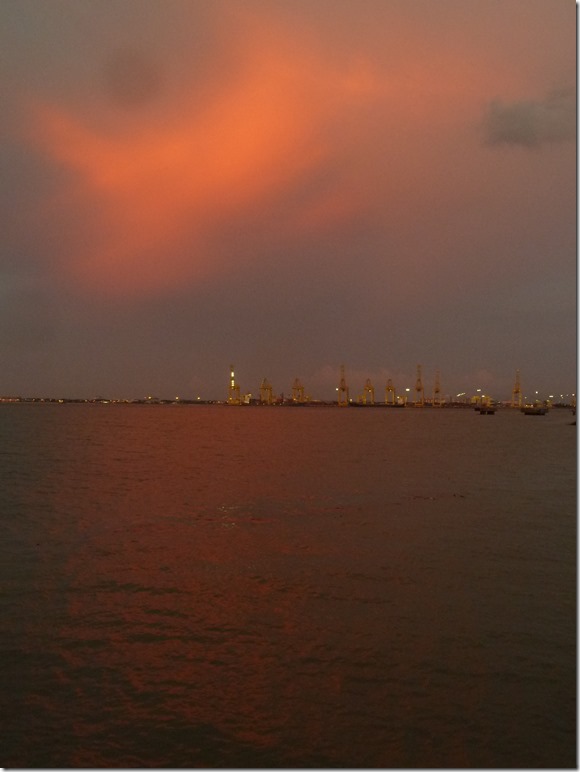 …aflutter with enough gloriously beauty-full mystery and wonder for a city ten times its size. It’ll always have my back, and by christ-child I’ll always have its — Durian season or no. GTF set to commence in four, three, two, one…