Stepped off the bus at Ekkamai (Bangkok’s intercity Bus Terminal serving Eastern provinces), burnt my bare feet on the tarmac, and was promptly flagged down by a copper and subjected to a bag search — “Police Check”, as he informed me more than once.

That was my re-introduction to this city I love perhaps more than any other. He was a nice enough fellow, indicated that I should put some god damn flip-flops on when the pavements are so hot and all. I guess he was looking for drugs, as he frequently uttered, “Smoke…smoke…” whilst very thoroughly checking every nook, cranny, zipper, drawstring.

But, see, I use quite a lot of nooks, crannies, zipper compartments, and drawstring bags in my packing, so he quickly grew bored, and chucked in the search only about a third of the way through. Never even got to my backpack at all; only my person and part of the electronics bag.

This little rendezvous notwithstanding, it seems to me that the military/police presence here is even less noticeable than it was before the coup. Indeed, the curfew was lifted a few days ago, and my beloved Lumphini Park has been returned to full glory, the long-term Yellow Shirt encampment there having been told to pack up and leave.

To repeat my remarks from a few weeks ago, I’m not, here, stumping for the military dictatorship. Just pointing that for the tourist in Thailand, it’s the quite rare occasion on which is even seen sign one of its existence.

That said, Khao San Rd. is utterly and completely deserted these days. Went there to see if I could find a map of the Bangkok bus system, and there were so few hippies there that the three-piece-suit sellers were all over the few white faces — including yours truly’s — like stink on shit. Did find a bus map, by the way – this thing is like the frickin’ Rosetta Stone; so helpful.

Alas, only a few days to spend here before making tracks, tomorrow, for Penang – and with errands and shit to take care of before leaving, and with the dodging of the raindrops and all, it didn’t leave much time for motor-coach-explorations.

I did, however, manage to make it to one Lumphini Aerobics session, and to pay a visit to my favourite Durian Truck. So, no complaints.

Quite the opposite, in fact: as I’ve said before now, to return to Bangkok is (at least to my way of thinking) to wonder why in the Hell had one ever left in the first fucking place? Impossible — as I’ve surely also opined before now – to articulate just what it is that makes the place tick. But there is undeniably just something about this city and this country — a je ne sais quoi of the Gods —  that makes you so absolutely thrilled to be alive that you could just about poop your pants.

Here are just a few examples of what I’m talking about. There are dozens of headspin moments like these every day here — many of them too fleeting to even consider trying to document (but lovely all the same), and another many more that can only really be grokked between oneself and the city. But lots are worth sharing, as well. 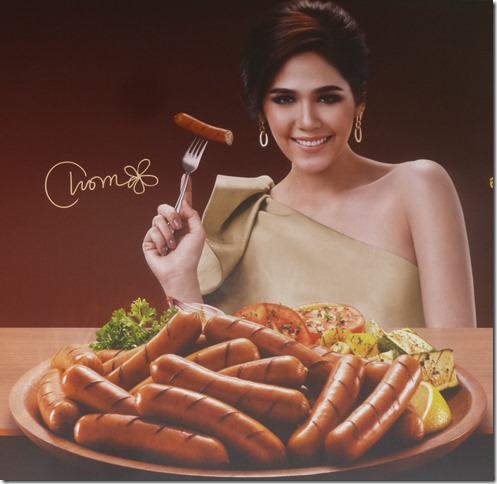 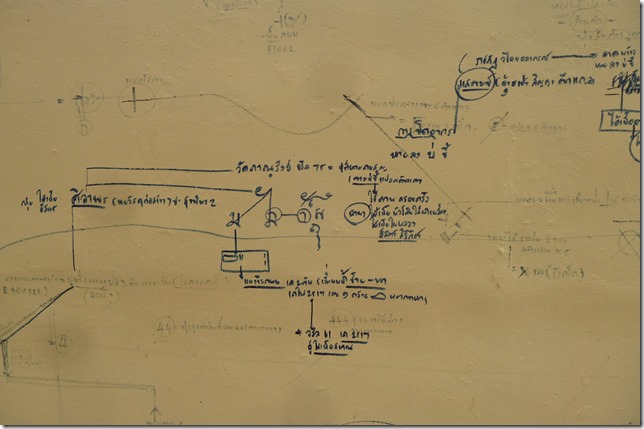 And, had never seen this before: a Mobile Blessing Unit. 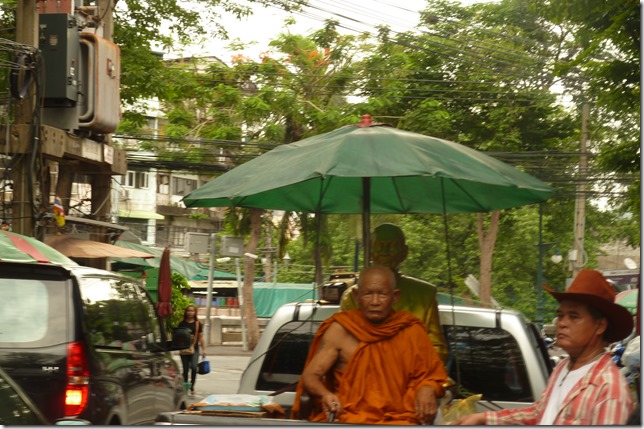 The happy-go-lucky Monk you see here splatters you with Holy Water, utters a few Words Of Encouragement™, and burns rubber on to the next one. And the dude you see in the cowboy hat? No, he’s not a customer, he’s the goddam right hand man. In a fuckin’ cowboy hat! Can you beat that?

Well, I can: When I walked by, he nodded politely to acknowledge my presence, and when I nodded back, he — with a big, goofy grin on his face – motioned for me to sluice some hard-earned money into the donations-box. How could one possibly be prepared to argue that this is not the greatest city in the World? Fuckin’ right they can’t! 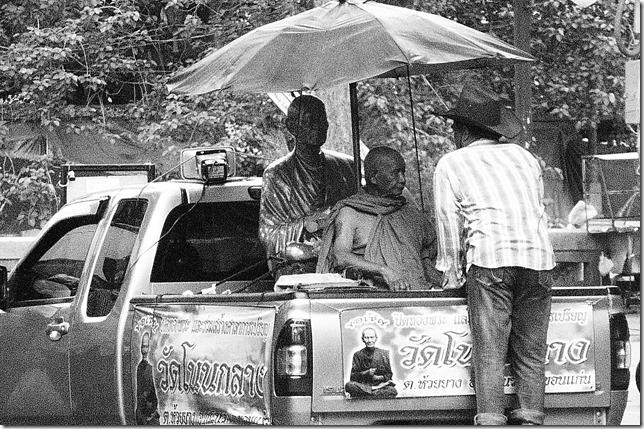 Now check out this guy.

Total fucking badass. But still not as badassed as this guy.

I’d gone up there to Chatuchak to pay a visit to the Or Tor Kor market. That’s the city’s Demonstration Fresh Market, with the prices to match. Very antiseptic. It’s where visiting dignitaries, or whomever, are taken to be made known the wonders of the Thai Agricultural Ministries’, er, agricultural ministrations.

When you’re in a location in which Durian is in season, thoughts of the Durian, and when it shall next be consumed, occupy your every waking moment (and most of the sleeping ones too).

But I’ve gots to admit this much: when I arrive to the Market, and I ponder, “What do I want to eat right now?” the little voice more less always, of late, ponders back, “You want to eat Mangosteen right now!” It’s just been so unbelievably delicious this year that I may have to move it into my Top 5 favourite fruits. It’s just whopping.

The Mangosteens here in Bangkok are every bit as good as those I’d been eating in Chanthaburi and Trat (probably having recently arrived from one or the other…). So retardedly amazingly wonderfully deliciously motherfuckingly outrageous that I thought to go up to OTK and see whether theirs might be even better?

I girded for the inevitable OTK sticker-shock, and busted a move on up there. And, yeah, the Mangosteens were ridiculously priced, as expected. And, but, they were actually far inferior to the fruits one can obtain at any old Market or street-stand around town.

It’s okay, though. Chatuchak Park was good fun to visit, as always. And, any trip which nets you a minute’s or two’s time in the company a beer-bellied street musician laying down the most beautiful violin concerto you ever did hear – totally oblivious to the whirlwind of activities going on around him – is a very fine trip indeed.

Well, he wasn’t totally oblivious. Allowed a young passerby to give it a go as well. 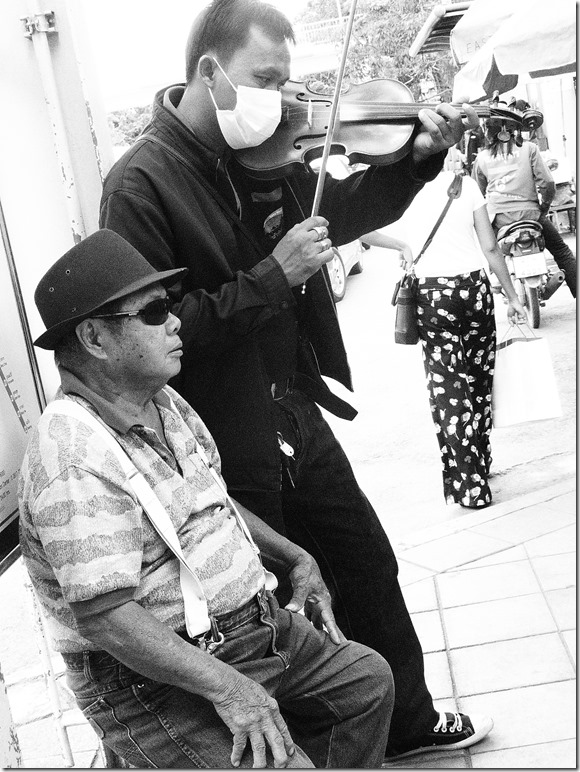 See ya in Penang… 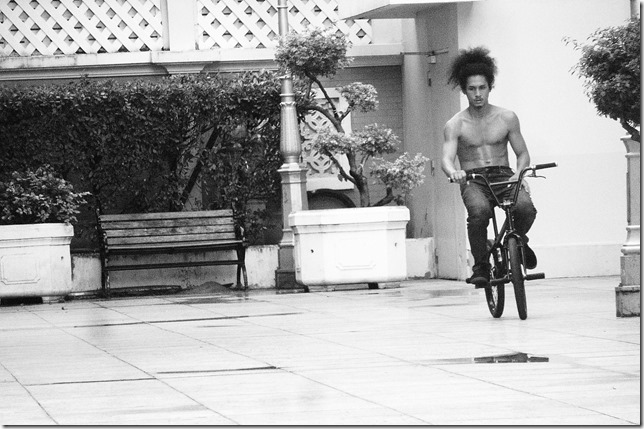