So it came to pass that on Monday evening, I kept asking the staffer here at the guest house whether there would be a parade next day in honour of International Labour? She kept answering that, not to worry, the guest house would remain open business as usual. It’d only be government offices that’d be closed.

Right on! Up nice and early Tuesday morning, there was a walkathon (or what) in progress. 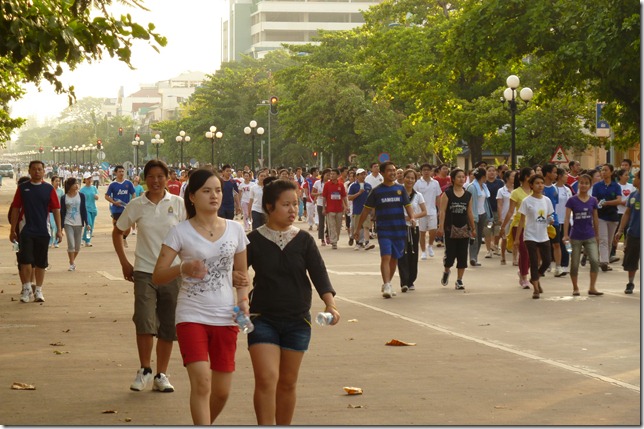 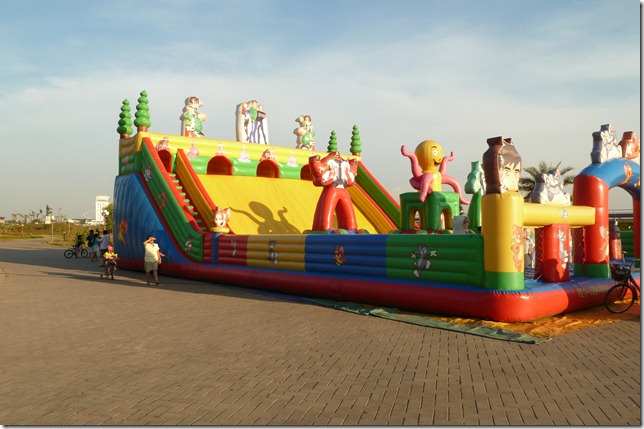 Shit you not!! They set up this fucking slide thing in the middle of the park. It hadn’t been there Monday, and it wasn’t there to-day. Happy Labour Day, kids!

Grabbed the city bus out to Xieng Khuan, arriving shortly before the scheduled opening time of 8:00 in the AM. Kid came running up to collect my admission fee. Then, when I emerged from the shitter, he was there to collect that fee – only to go booking back up to the front gate when he seen another group approaching.

Even by 8:00 in the AM, it was already so hot. But I’d not known about this place when last I’d visited Vientiane, and wasn’t about to let a little obstacle such as 9,000° outside stand in my way.

What it is, it’s the analog to Sala Kaew Ku; which, you may recall, I consider to be one of the very greatest sites in all of Asia, if not the goddam Solar System itself. The artist had built the Vientiane (it’s actually about 30 kilometres outside of the city, down the bumpiest road in World history) Park in 1958; then was excommunicated from Laos; taking refuge in Thailand, where he cracked it wide open with the Sala Kaew Ku in 1978.

Whereas the Nong Khai site is the full realisation of a fantastically depraved worldview; the Vientiane Park is more like a wack testing ground. Well factually, it’s not even all that weird – except for the so-called “Pumpkin”. 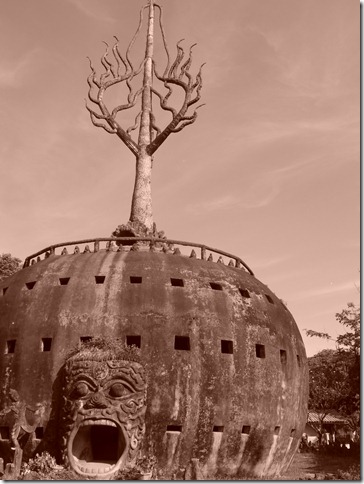 You head in through the mouth, there; and inside there are four levels, with an under-lit room to each level. The first- and third-level rooms can only be achieved by climbing up an outer stairway to levels two and four, and then descending/ascending the inner stairways to get to one and three. 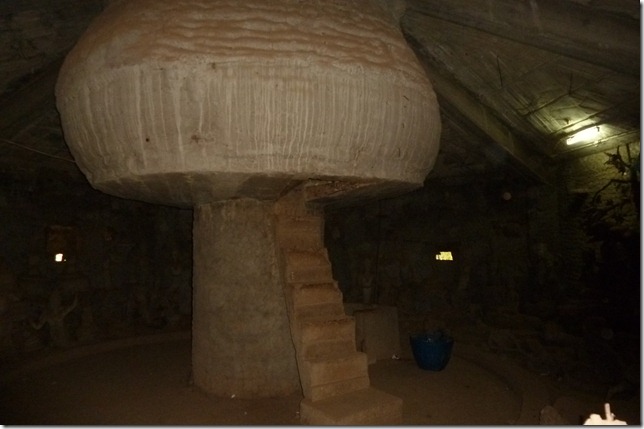 From the roof, one has a nice view of the Park, including the great Reclining Buddha situated nearby. 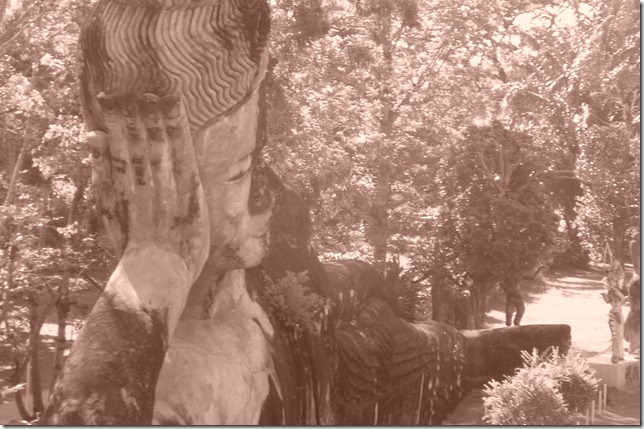 Inside the rooms are some (relatively) pedestrian Budhhiatic scenes; although you can see they’re not terribly well maintained (whether this is by design I do not know). 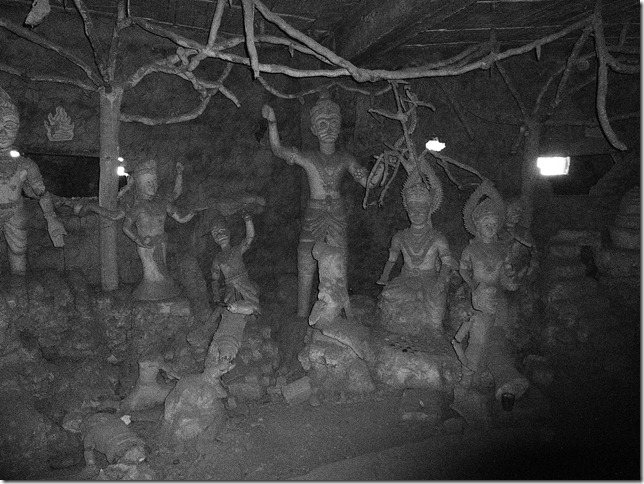 But the real story is the absolutely horrific displays of violence portrayed right alongside. Maybe this is a sort of commentary on the ridiculous Hell and Damnation imagery depicted in so many religious artworks? At any rate, it’s the stuff of which nightmares are made. (Funny thing is, all the kids gravitated to goofing off inside here while their parents were exploring the rest of the Park.) 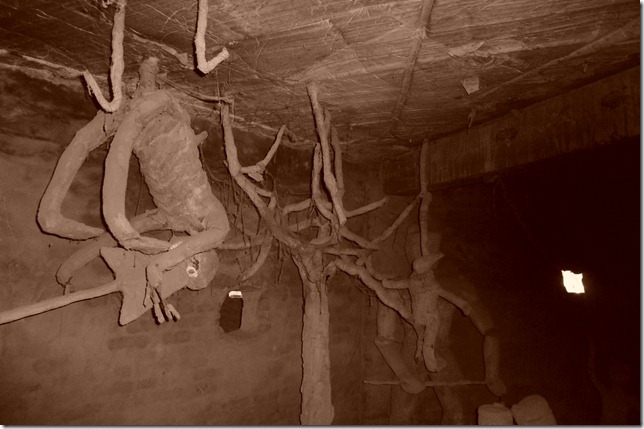 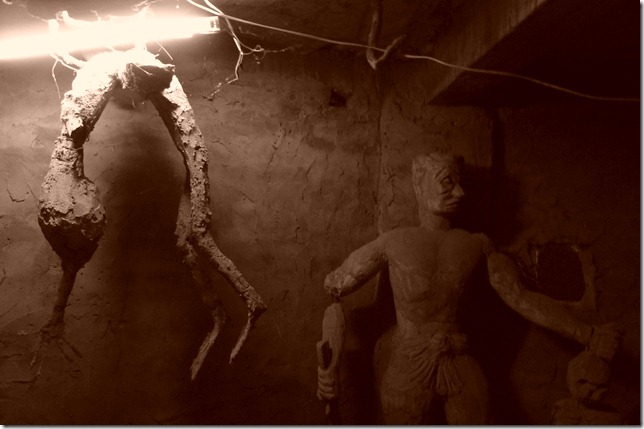 As I say, the Park isn’t as wacked-out insane as is its Nong Khai cousin, but it does have its moments. 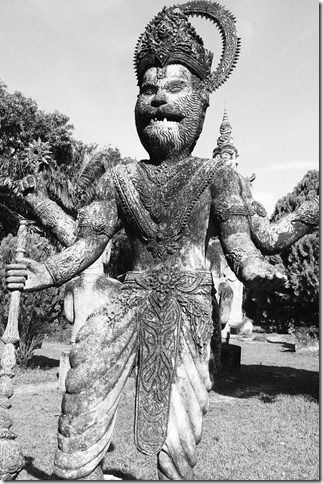 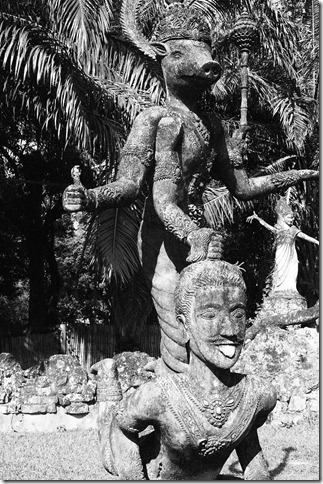 Also, far fewer of the towering giants; but, then again, there are a couple. 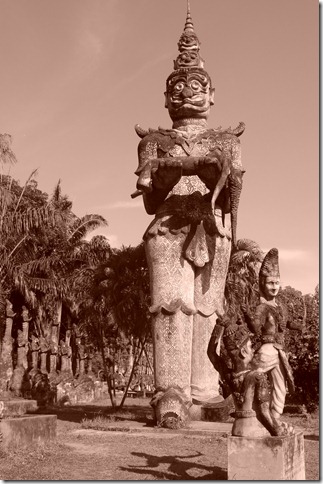 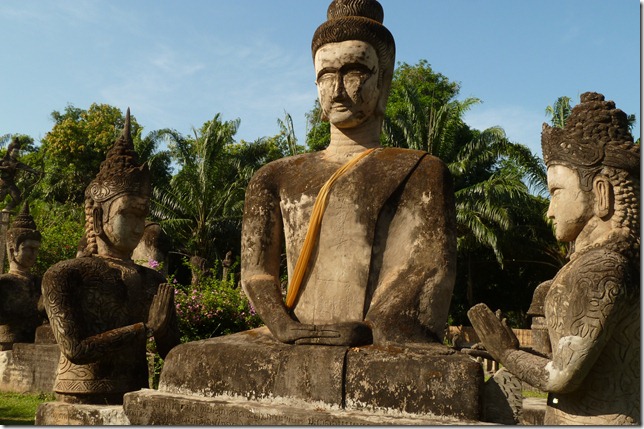 It’s got the Nong Khai Park beaten like a drum in one department: butterflies. There’re lots of ‘em (as befits its Laotian address)! You can see a few here. 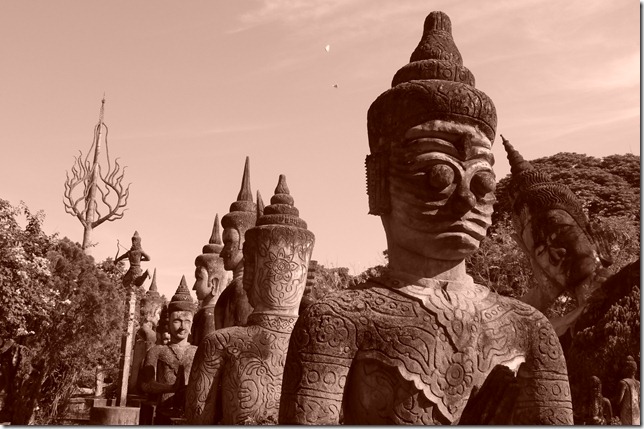 As in Nong Khai, there are some terrific juxtapositions given sight by one’s particular location and viewing angle at the given moment. 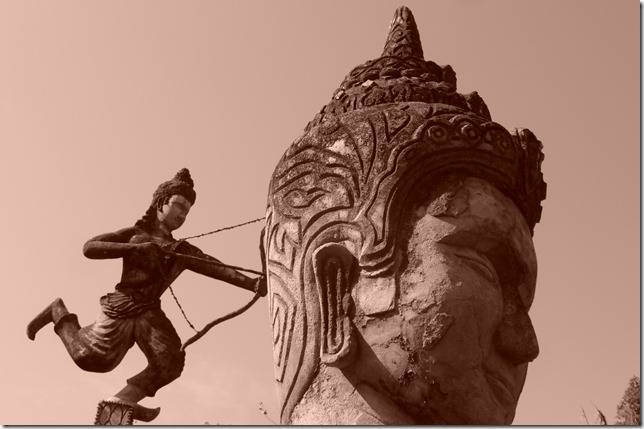 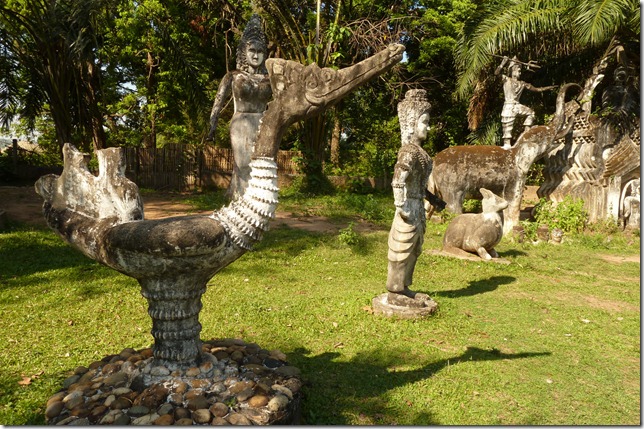 This may be the most treacherous staircase ever. 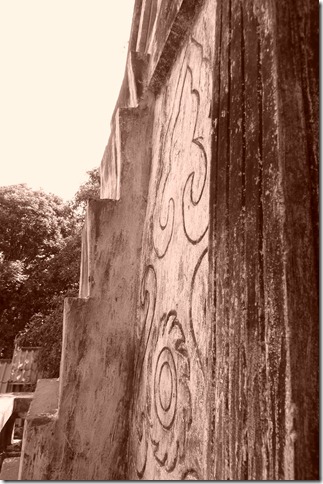 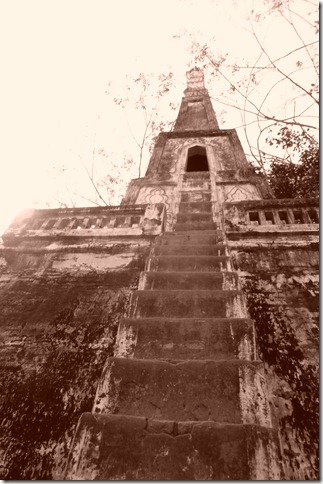 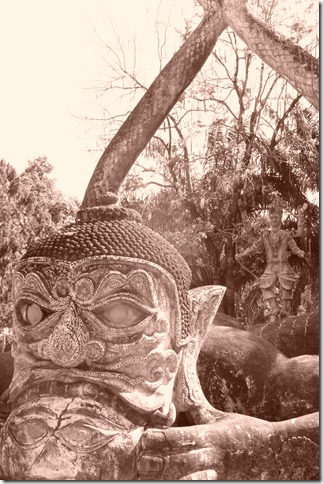 As, in general, is the Park. If one would choose one of them to which to pilgrimise, it’s the Nong Khai side without a moment’s hesitation. But the Vientiane side’s certainly worth a visit as well. (And at $2 for the round-trip bus and admission, quite the bargain!) I’ll’ve uploaded the pics to my Flickr page’s Sala Kaew Set. 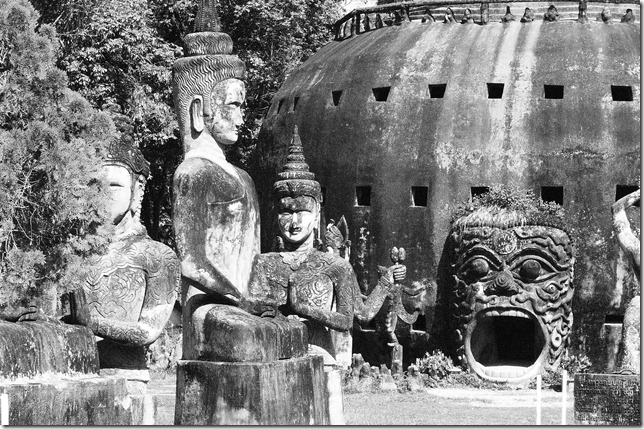 The return trip, we stopped in at the Frontier — about eight kilometres from the park — to pick up riders to bring into town. I remembered, now, how much I love Laotian bus drivers. “Talad Sae! Talad Sae!” the driver repeatedly shouted out his window as he drove around the area, a fistful of Kip he’d collected in fare clutched in the same hand with which he operated the gearshift. Talad Sae is the morning market; located next door to the bus station.

“Talad Sae! Talad Sae!” That exclamation is gonna drive my dreams, I suspect, for many weeks to come.

Vancouverite with whom I shared the dorm the first two nights was pretty cool. He’s just got on the 24-hour bus to Hanoi. Said he’d been out, a few nights ago, with a couple of friends (a Belgian and an Alaskan), drinking beers down at the river.

The Vancouverite also cast another vote for Nepal. He’d in February trekked about four days’ worth of the Annapurna Circuit, and had quite loved it. He’d not gone to Nepal for trekking, as it happens; but because he’d been to Kathmandu as a youngster, and wanted to return. Then, after having been there a few days, he realised all the backpackers were heading out to trek, and decided, When in Rome…

Yesterday evening, Tuesday, I drew a pretty large crowd whilst juggling in the park. There were even a handful willing to give it a try – quite unusual in my Asian experience. A few who were especially appreciative of my abilities stuck around for quite a while, practicing their English on me.

Names of “Tao” and “Symphun”, they were super-nice guys. The latter eventually started going off with back-flips, hand-walking, one-armed pushups, the whole shebang. I told him this was much more impressive than my stupid little jugglings. 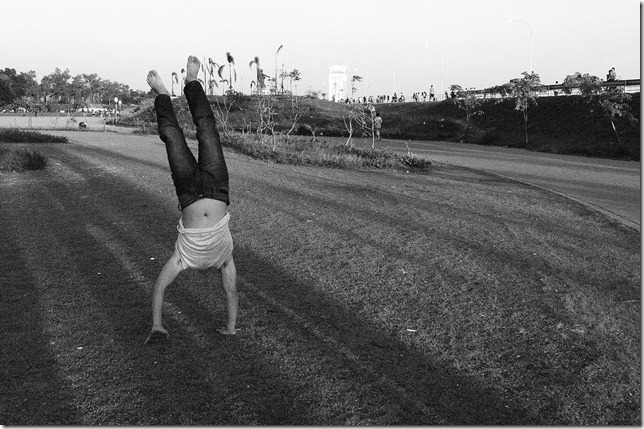 As he was leaving, he became the third Indochinaman to request my e-mail address. The first two have to-date failed to contact me. Hopefully, this time’ll be the charm, as I really quite enjoyed these gents’ company.

As night came on, there was a fine light-show over the Thailand side. Didn’t hear any thunder, so I suppose it was fairly far off. One will see a half-way decent flash near the end of this clip. No surprise, though, the camera’s lens failed to capture any of the truly magnificent goings-off.

To-day, Wednesday, scooped up my Passport with freshly minted Thai Tourist Visa ensconced safely inside. I’ve actually got until the 29th of July to enter the Kingdom with this Visa – but there’re Durian to be eaten, and they shan’t be eaten in Laos!

This shop was pretty funny looking; though I didn’t attend. 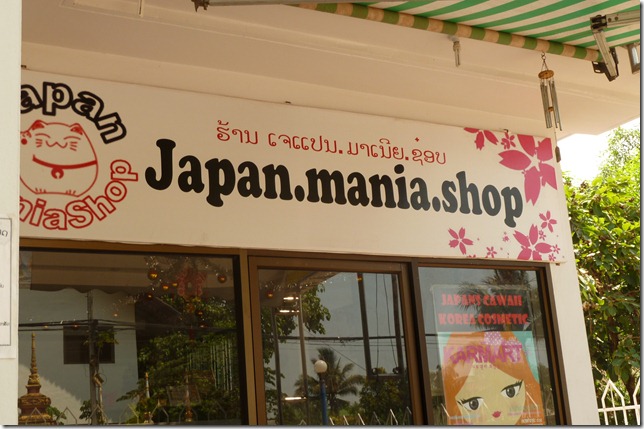 After some exceptionally delicious lychees, I did find my way back to the gallery whose exhibition I’d loved so much last time I’d been here. Was disappointed to find that the same exhibition is still on display, even though it was supposed to have closed on the 28th of February. Well, the photos are still as breathtaking as they’d been the first time. Photographer’s called “Adri Berger”, in case you wanted to order some prints.

A fine Vientianese sunset; and this all-too-brief Laos sojourn is at its end. But not before a nice send-off: as I write these words, we’re in the midst of being thwacked by a decent little windstorm. I expect– ooh!, up to the minute: lightning has just begun to materialise. 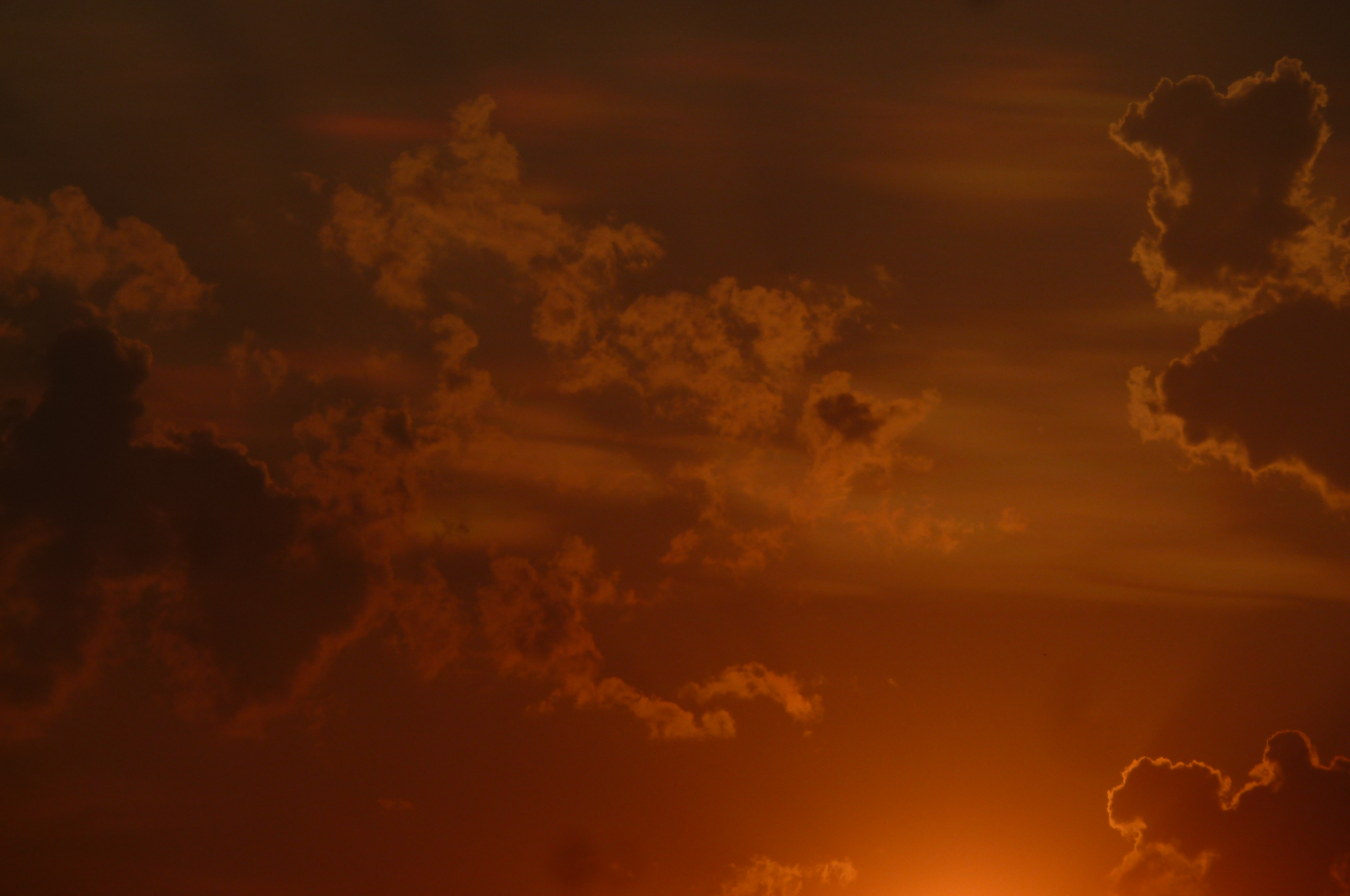