Well, what need of cookoven whene’er the Sun is set to “exerminate”? None, I’ll wager. 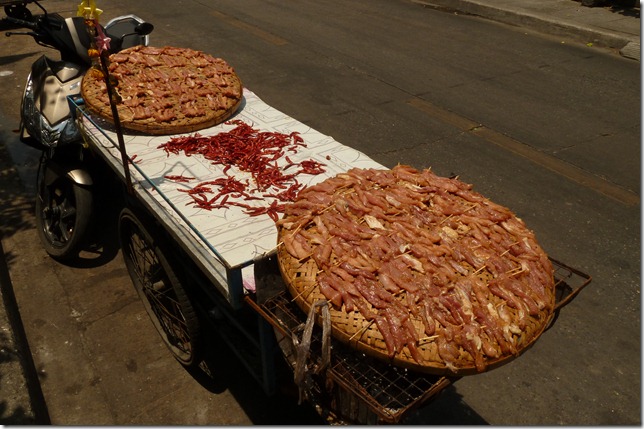 Speaking of meat, didja know one can order a Double Big-Mac here? Nor did I, ‘til I caught sight of a brochure sitting e’er so innocently on the table. 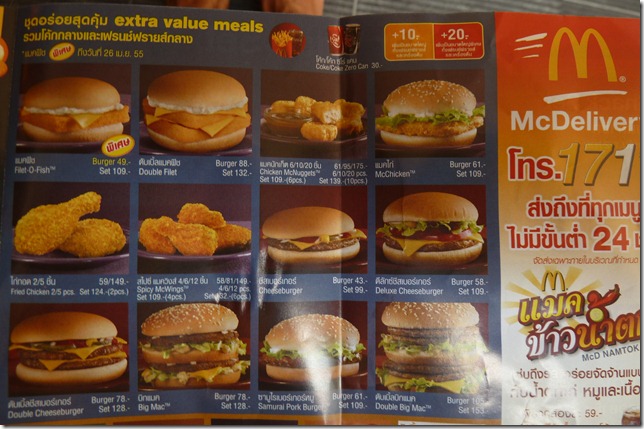 Anyhow, apologies for the parsimonious posting activity. What happens is, when one checks in at De Talak, it’s, just, pay the money and PHWUMP!, into the whirlpool. A whirlpool of fun, that is. Nevertheless, difficult to even keep one’s head above water, let alone writing some blog posts. Rather, just hang on for dear life, and enjoy the ride.

Saturday, I was all set to head up to Central World to continue the quest for unwaxed floss. An Indonesian name of “Chris” suggested I try Big C, as it’s only a ten minute walk from here. Could not find unwaxed floss there, but did end up returning with a yellow watermelon.

Sitting out at the picnic table eating that, and listening to Chris tell of his recent African safari, and here materialise two dreadlocked Norwegians burdened with armloads of Durian. Turns out, they’re from 30 Bananas A Day, and had spent the previous two months chilling out on the Southern islands, eating enormous quantities of fruit.

They were in a few hours to fly back to Norway, so this was their big blowout meal. They gave me some well-appreciated pointers in Durian selection (I’d had a total bullshit one the day of my arrival – completely inedible).

We talked of Durian, fruit, philosophy, peak oil, human and animal nature, and all kinds of such-like. The conversation was so engaging that I ended up missing out on Lumphini Aerobics! (If you could believe it?)

When it was time for them to go, they even returned to Khlong Toei for some Durian to eat at the airport. I went with them to get some of my own, and bid them off.

That night, as noted, a troika of newly arrived Korean gentleman learnt us their wacky card game name of “Go-Stop”. So many rules! Confusing as Hell; but fun, too.

Two Korean girls walked in and lost their collective shit seeing a bunch of crackers sitting around playing their card game (our teachers were busy eating noodles by this point). A Berliner was so enthused with the game that he promised to organise a hostel-wide tournament for the next day. It never did materialise, in point of fact.

Sunday, yesterday, I did make good on my promise to bust a move up to Central World. Finally, head hung in shame, I called off the continent-wide search, and resigned myself to using waxed floss.

Later, another Sunday evening concert in the park. It weren’t the symphony orchestra this time, however. Instead, a, like, high-energy calypso/swing band with Vegas-style dancers and a rotating cast of vocalists. 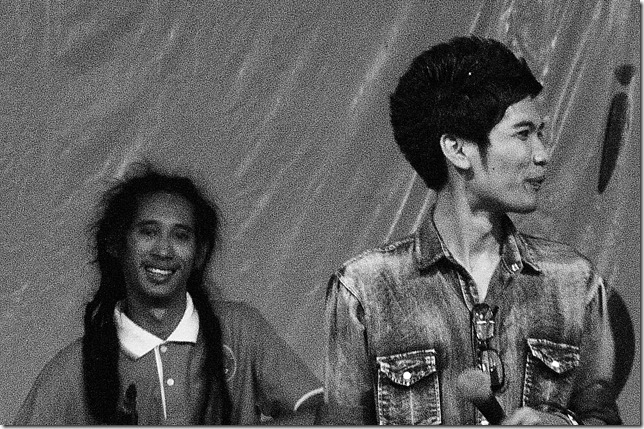 The vocalists were just okay, I thought – certainly they were having fun, good on ‘em. But it was the band that really killed it dead. They look like just a bunch of high-school-aged kids; but they sound like they’ve playing together for ever and ever and ever.

Sons of bitches not only laid down the llama-whipping groove; but they never tired. When I finally took my evening leave, they’d been rocking out for two hours straight without a break.

The footage should give a good picture of the entertainments’ goofily surreal fun. Unfortunately, the camera’s mic is nowhere near to the task of capturing the band’s stunningly great performance. But it’s all I gots, see?

To-day, Monday, I bussed it up to Aw Taw Kaw Market. That’s the organic market I told about back in January, having visited a few times. Their prices right now are fucking insane. God damned 200 Baht per kilo for Durian; and 80 for mangosteen. Damn. I ended up only with some cucumbers, which I devoured on the return bus journey.

While walking back to the bus stop from the market, I helped two gentlemen (driver and fare, I presume) push a disabled taxi-cab down the road for a coupla hundred yards. Have been meaning to just jump in and lend random helpings hand; so this was a nice opportunity.

Of the evening, it was great be back in the saddle for Lumphini Aerobics after having missed not only Saturday, but Sunday as well (the Sunday concerts pre-empt my preferred session).

Then it was time for the Durian pig-out! I’d purchased too many of them (plus which a few kilos of mangoes), and was sharing it out with all who would dare. The Japanese used-clothing hounds (you’ll recall they were here last time I was as well), the card-playing Koreans, the Dutchwoman and Portugesienne freshly returned from Ko Chang, the Finnish Chinaman, and of course the hostel staff all joined in.

They all took it in fairly small quantities; but none of them outright rejected it. I daresay, they will dream Durian dreams this night, and wake with the scent. Soon enough, they’ll be fiends, just like any good human ought.

Am going to try to get my lazyass up early enough to visit some more temples before the Sun begins its daily rite of decimating all in its rays’ paths.

Right now, though, there’s some nutty art project going on here in the common room. The Finnish Chinaman is making a bunny. I think the whole thing was organised by this one German dude.