First, some site news: added a little map plugin to the “About” page, linked up there in the banner. This was the best plugin I could find, though it doesn’t support OSM. The author says he may add this feature in future revisions; ‘til then, we’re stuck with the All-Seeing-Eye.

On Saturday, the forecast called for 80% chance of thunderstorms, with decent accumulations possible. I busted out the door at 6:00 in the AM, figuring I would tempt fate, and make my last visit to the Park. Only to discover that it was already raining. So, I bagged it. Turns out, it was a good decision, but for the opposite reason: the clouds quickly burnt off, and it became a superheated inferno of a day – though the storms arrived late and lighted up the night-time sky, bringing with them the promised accumulations.

Sunday and Monday I was all following the goddam Masters – in the middle of the night, see; so now I’m all jet-lagged, even though I never even made sniff of a lousy aeroplane.

I was looking at a map different to the one I’ve been using, and noticed that there’s a temple in town that I’d not yet visited. So of course I hurried over there to see what it was. Of course, it’s Siem reap: it was beautiful. 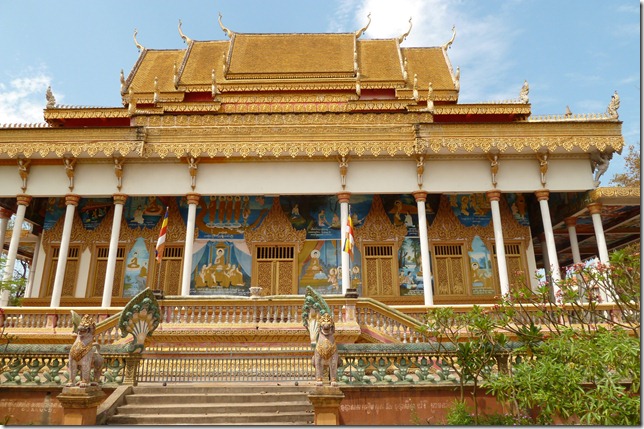 There’re a couple of Angkor-style Prasats on the grounds; they look to be used as office spaces. Pretty nice little tip of the hat, I’d say. 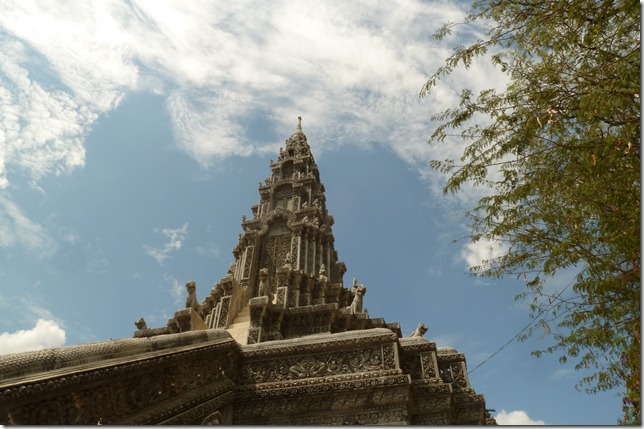 The murals are…well, in any other place, one’d say, “Outstanding! Jaw-Dropping!” But it’s such stiff competition in this town. Suffice to say, this temple’s murals more than hold their own. 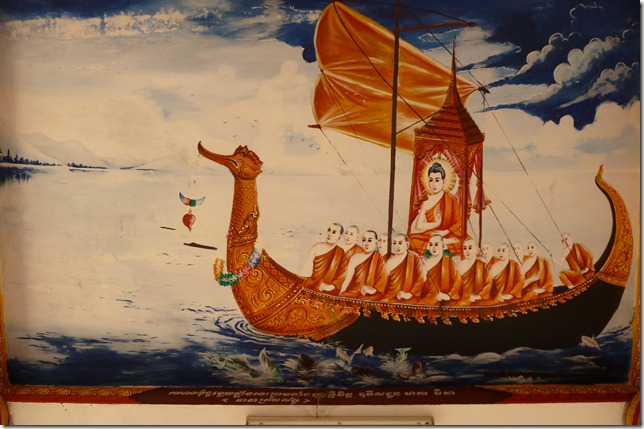 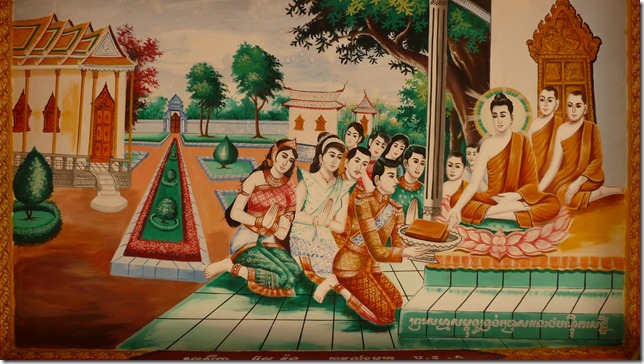 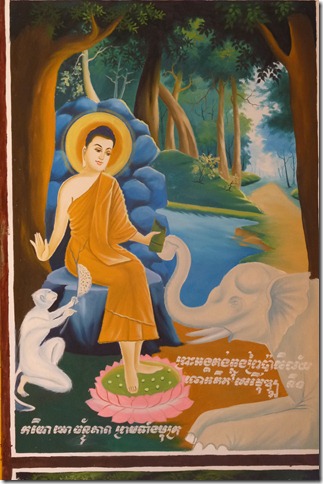 They’re not as flashy as the others’; but take the time to have a good look-see, and they’ll really get their hooks set into you. Easier said than done, however; as the designers were bound and determined to fill up with artwork every possible nook and cranny. 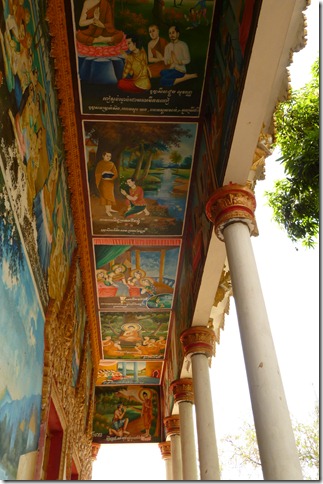 Inside, more frightful scenes of the wicked receiving the just desserts. 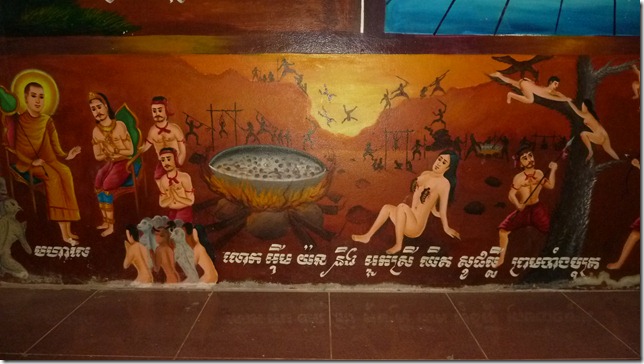 Where do people come up with this shit? Or, maybe the more important question: do people really fall for this shit, really? If I don’t give the Church all my money and do everything it says, I’ll have giant cockroaches eating off my genitals for all eternity? Really?

Decided to make visit to that one big Market I’d eschewed when there was a bicycle-parking fee. Wow, it’d seemed so close-by via bicycle; but turned out to be a three-hour round-trip on foot. Not to mention it was a stupid time of day to do it, as the sun was hotter than the murals’ fires of Hell.

In the end, it wasn’t even anything special, though this guy seemed to be very happy.

I wasn’t going to walk all the way out there, however, and not patronise one of the many Durian sellers – besides, I needed to get me a Camb-ohhh-dian Durian at some point, right? So, I purchased a small fruit for $3 to the Kilo. Wasn’t as much flesh as I’d hoped for $3, but boy was it delish!

And there you have the story of my first Durian since arriving in Asia. ‘twil not be the last, I can assure you. Know what this means?

Wellsir, neither do I! But according to what I seen on that-there Internet about which people are all the rage, it’s to the effect of:

4th to 13th May, same location around Chanthaburi Stadium and Lake Tung Na Choei in the city centre.

Chanthaburi is a fruit paradise offering fresh-picked tropical fruits from orchards such as durian, rambutan, mango, and mangosteen. The festival is coloured by fruit floats, fruit quality contest, beauty pageant, jewelry, and OTOP (One Tambon One Product) bazaar.

Later on, a lady was bottling up for sale quantities of (presumably) home-made rotgut. 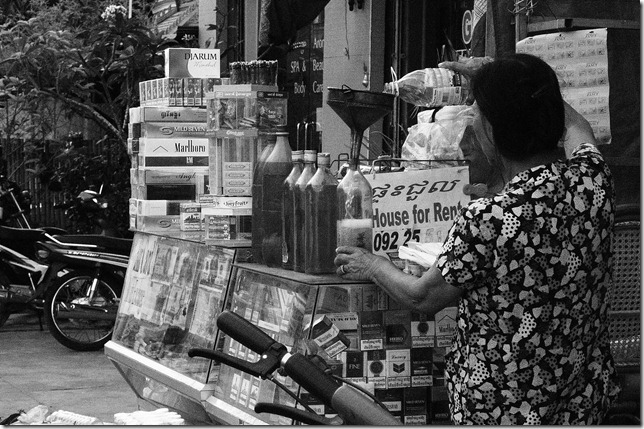 Well, the above was all written Sunday evening. Then, yesterday, come to realise that I’d burnt my scalp during that damned walk out to the market – right through my hat, too. This’s kind of knocked me for a loop a little bit. Nothing too serious; just very tired mainly.

So I’m planning to take it easy for a few days; then probably on Thursday finally make my last and final visit to the Park. Friday begins the four-day Khmer New Year celebration.

You may recall that I’d been debating whether to get myself to Luang Prabang or to Chiang Mai (Laos, Thailand, and Cambodia celebrate their New Years concurrently) to see how it’s done. In the end, I’d decided on the latter, as it appears to be more fun than about six or seven barrels-full of monkeys.

I’d even gone ahead and booked a dorm room there. But then I recalled that Chiang Mai is having air quality issues this Spring; and after some snooping around, discovered that it’s even worse than usual for this time of year. So, Chiang Mai was out; and I decided to just sit put here in Siem Reap.

Could’ve gone to Bangkok, of course; but I think I’d prefer to be in a smaller town. I gather that the water-throwing side of the festival may not be as boisterous here as it would in Thailand or Laos – but one thing I do know is that the music won’t be better anywhere than it is here!

That’s about the best part of Siem Reap town, in fact – the amazingly wonderful traditional music playing out of the public address speakers in the mornings and evenings, as well as the more modern music thumping out of boom-boxes set up by various shop-owners out on the streets.

The only kind of hitch is that staying for all four days shall mean the overstaying of my visa by a day, and the incurring of a $5 fine. But hopefully there’ll be five dollars’ worth of entertainment value to be had during the Fest. Shouldn’t be too much of an issue: the decorations have been on sale for a few days now, and the peeps seem to be getting pretty psyched up. 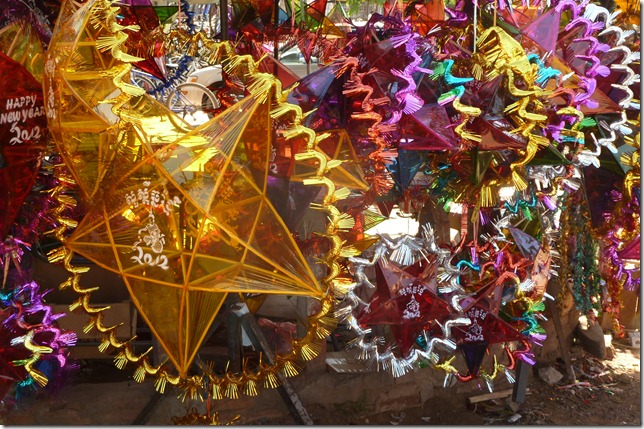 Coupla Notes From The Field, by the by.

One, I’m still fairly baffled by this whole, “Sir! Buy Shoes?” phenomenon. I mean to say that if the shop-owners are proposing to sell to me a pair of shoes, rather than to give to me a pair of shoes (which offers are sometimes forthcoming from civilians one passes on the street back in the States), it pre-supposes that they expect me to be equipped with the means to afford a pair of shoes.

In other words, that I’m walking down the street completely unawares that the one thing I’d neglected to purchase in preparation for my Cambodian vacation was a pair of shoes. And that their friendly reminder will jog me to my senses. Weird. (Although…I guess that’s what advertising’s all about, eh: influencing people to purchase shit they’d had no idea they were needing.)

Second, you ever wanna cause gales of laughter among the locals – at you, with you, for you, about you…doesn’t matter – just bicycling down the street sans shoes and/or walking down the street with a watermelon in each hand. Works a charm!