Got my lazy ass up at 6:00 in the AM, for the half-hour walk up to the bus station. The worst part was having to put on shoes and walk around in them, which of course aggravated my toe. I figured it would be an issue, and it was.

I read somewhere that one should look “presentable” when passing through customs, just in case the officials might want to give a second- or third-degree pranging. In practice, entering Thailand is the very definition of “rubber stamp”. But I nonetheless shaved and showered, put on long pants and clean shirt. And, ugh, laced up the shoes which sit at the bottom of my pack waiting, patiently waiting, for the one day per month when I try to look “presentable”.

Actually arrived just early enough to head up the line at the ticket counter. That was somewhat cool. As such, I was assigned to seat A1, right behind the driver.

The exit point is about a half-hour’s ride south of Vientiane. Get off, get stamped out of Laos, get back on, cross the bridge, get back off, get stamped into Thailand, get back on, ride five or ten minutes to the bus station, and you’re there. Lines weren’t too bad at all — although added to the bus fare was a 2,000 Kip “overtime” fee for its being on a weekend; as well as a 9,000 Kip “overtime” fee for the right to cross the bridge.

Had e-mailed ahead to reserve a room at Mut Mee, a quite famous guest house here in Nong Khai, with rates ranging from 150 Baht all the way up to 1200 Baht. The response was that they’d received a number of requests for Saturday, and that I should show up and they’d see what they could do. (Depends upon the number of people who’d be checking out on  the given day.)

I figured that with my secret weapon – arriving to town by 9:30 in the AM, I’d be in, no problemo. But, it turns out, I’ve landed here right on the cusp of the town’s most important festival, which begins on Monday and runs for ten days. It has to do with the anniversary of the repelling of a Chinese invasion. Great luck!

But also, good luck trying to find a place to stay! The town fills up, mostly with Thais. The helpful gentleman at reception explained that once all the check-outs had been determined, by 11:00 in the AM, they begin filling the rooms in the order they’d received booking requests – some people had booked up to a year in advance!

So I went walking down along the river to see what else might be available. Inexpensive rooms were slim pickings indeed. The best lead was that a lady might have a room, again at 11:00 in the AM, for 300 Baht (that’s then bucks). Otherwise, it was looking like it might run up to 400 Baht or more for the night.

But on the way back to Mut Mee to take my chances there, I noticed a non-descript little place right across from the river. Had somehow missed it when walking this road in the other direction. A little sign said that their Singles were 160 Baht, Doubles 240. I figured no way in Hell would there be vacancies. But I asked, and there were.

And the place is awesome! It’s got a frickin’ payphone out the front. 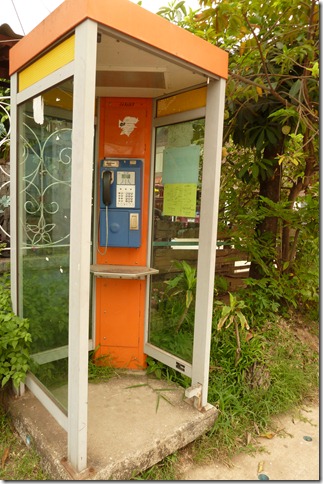 The room is small, but’s got everything you need: comfortable bed, table and chair, fan, a comfy-chair, even some artwork on the walls. Shared bathrooms, of course. And the Internet connection is the best I’ve yet encountered – better even that the hostel in Bangkok.

There’s a wonderful little courtyard in which to relax (no smoking allowed in the courtyard!!), and the River Walk is right across the street. Incroyable! Still wanna see what Mut Mee is all about; but, who knows, may just end up staying right here throughout the festival.

The place wasn’t even listed in Wikitravel’s Nong Khai entry. So I took it upon myself to create a listing for it; my first Wikitravel contribution to-date.

And if you’d like a travel tip, I’ve got one. If you’ve no reservation, arrive in the town early to get the best selection in lodgings. Simple, yet effective. It means arising early to catch the day’s first bus. But it’s worth it.

The River Walk is quite nice, though I did not traverse its entire length, as I had to head inland to find some grub. While doing, visited a temple or three. Found some Naga that are really playing for keeps. They look like Satan’s own, don’t they? 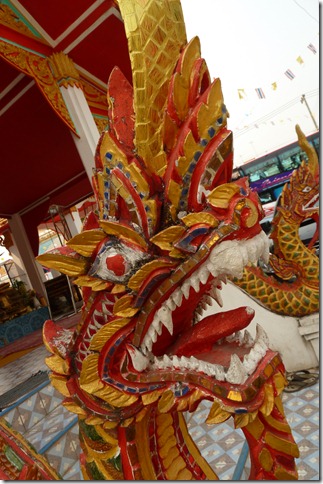 Inside…a white Buddha? I give up. 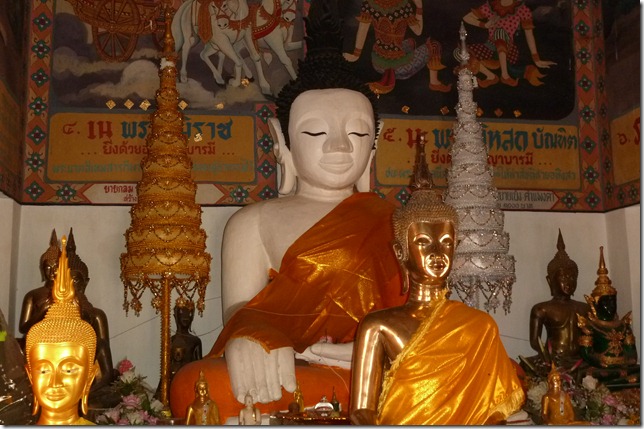 It was hotter than Hell…but then it began clouding up, and even seemed it might rain down. After having had lunch by the river, and back on the River Walk. The Walk has shelters along its way, presumably they receive much use during the rainy season. I guess you can see ‘em there, on the left. (That’s the “Friendship Bridge” in the background.) 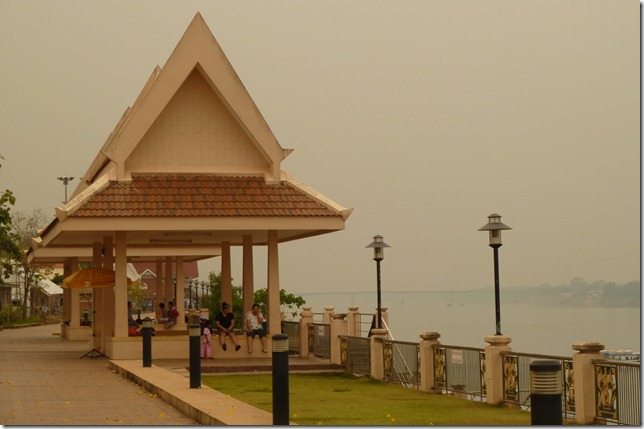 Felt some drops along the way, but ended up back at the guest house just in time for a lovely thunderstorm, taken both in the courtyard and also in a shelter right across the street. Some terrifically loud thundercracks, I can tell you!

Here’s a shot across the courtyard (much of which is covered, for good reason!). 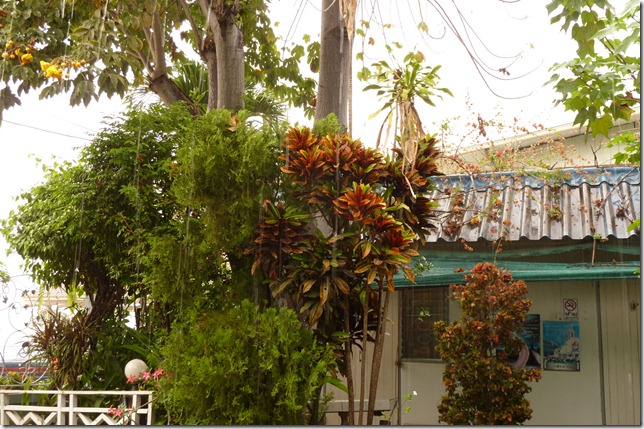 The storm lasted an hour or so, after which it began drying out. But as evening fell, the afternoon drencher turned out to’ve been only midday snack; for now, the real enchilada got underway. Torrential rain, gusting winds, flashes I’ve lightning killing up the sky. I didn’t see any bolts; but I did see one green flash. That was pretty interesting. Seemed like the thunder wasn’t quite keeping up with the lightning – but it nevertheless put in a very good show.

That ended. Now it was dark, and I went out to assess the damage. The River Walk was pretty deserted, although the restaurants were open. I did see one Caucasian jogging by.

This was fun, walking around, the lightning still going mad in the distance, a slight breeze up, but the perfect temperature. The Laos side of the river had lost power, so the only lights from over there were the cars driving along the river.

But then, without warning, another wave began. And for the second day running, I did scurry. Gimpy toe even yet, but got no choice! The next few hours saw the storm wax and wane – the waxings often bone-shakingly violent.

Right now, it’s quiet. But for how long?