This week of Durian Ecstasy has not been without its cost. In my addled state, I have managed to:

Not to be messed with, these Penang Durian!

Friday eve. I finally et me a Red Prawn. 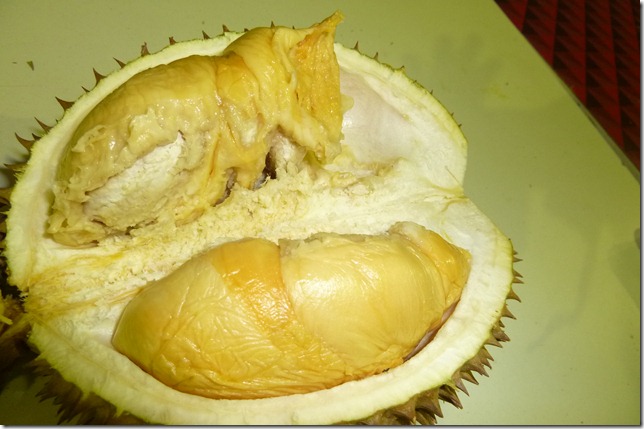 Oh, my. That’s what all the fuss is about!

Also met Faisal’s grand-uncle; the owner of a Durian orchard here on the island. He was asking me, if I recall, whether my travels had interrupted my time in the military. “No! Never been! Never would! I hate that shit!”

He was sure he’d heard something about Mike Tyson having done time for having skipped out on his military obligations. Of course, it then struck me that he was confusing Mike Tyson with Muhammad Ali; and fifty years ago with nowadays.

Funny, isn’t it, how odd little bits of cultural ephemera can get all twisted and tangled like that?

By Saturday, Hassan declared, upon my arrival, that there was not much new left for me to try. He wanted to sell me a “Ganja” (I guess that’s really what it’s called), but when he opened it up, he didn’t like the looks of it.

“What about D600?” I wondered. He was surprised to learn that I’d not yet tried this variety; and so it was off to the races. The D600 was quite nice; but it was the D2, which I did next, what really threw me for a loop. So good I had to immediately order another of the same variety.

They call during a “heaty” fruit: it makes you sweat. Mangosteens are frequently taken to counteract the effect. But for me, the effect is slight or even non-existent. Except with the D2 – I was burning up well into the night. Pretty crazy.

Sunday, the last day of the fest, it was really getting down to the nitty-gritty; as they didn’t want to take any Durian home with them. But when I arrived, there was still a massive Red Prawn available: 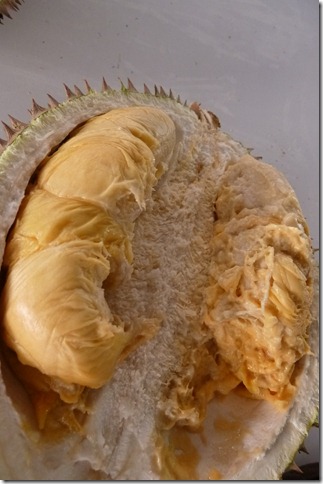 Just as I was getting ready to dig in, Faisal stopped by with a lovely Cei Poi. I polished that one off first, before moving on to the Red Prawn, and then another D2 to finish the festivities with.

Sunday, the prize-competing fruits were lined up, awaiting their destiny. 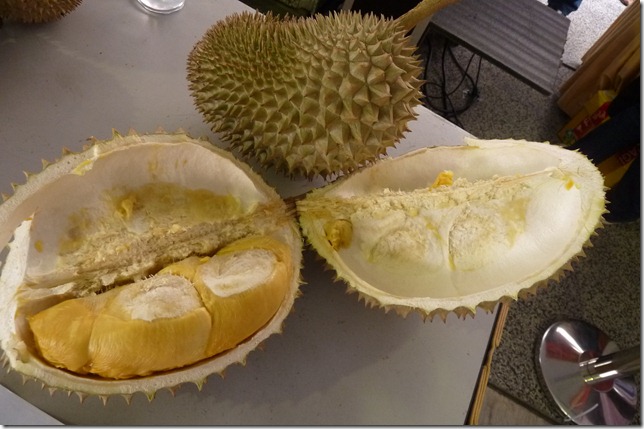 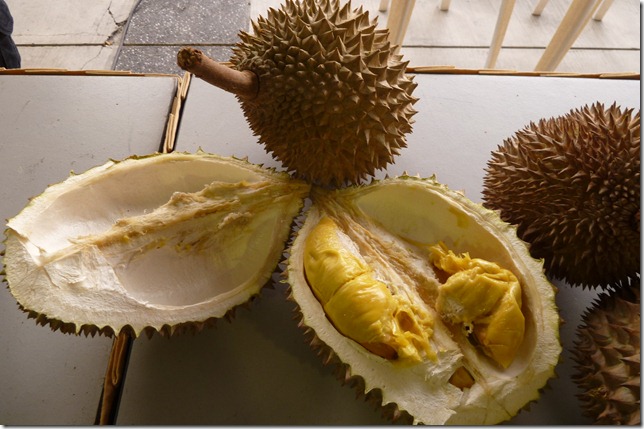 I was sizing them up, and Faisal came over and just started rattling them off: “That’s a Musan King, that’s a Hor Lor, that’s a Cei Poi, that’s a Capri…” The kid is a prodigy.

At the end of the night, after all the Durian had been sold, and all the fixtures broken down and loaded into the truck to take back to the shop, Faisal and Hassan presented me with a gift: 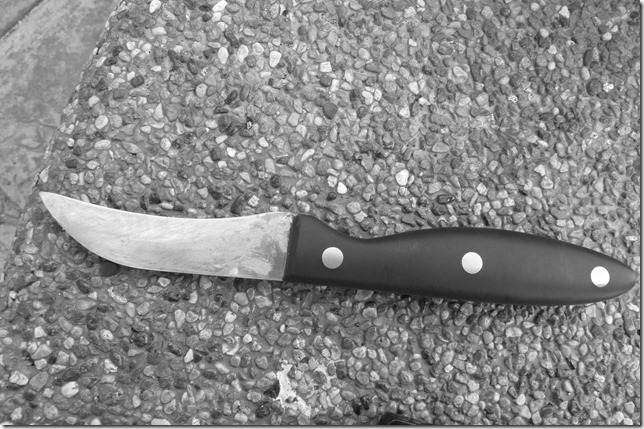 My very own Durian Knife!  Yeah, yeah, I remember: I said before that to open a Durian with a knife is a sacrilege. I still believe this in principle; but, when in Rome…

I ended up back at the shop again Sunday night, hanging out for a while. But it was almost midnight, so Faisal was too tired to drive me back up to George Town, and instead his father did the honours. He says that next year when I arrive, he will teach me how to speak Malaysian. For beginners, he taught me to say, “My name is Eddie.” But I’ve already fucking forgotten it. (Well, except for the “Eddie”.)

Meanwhile, staffer at the hostel who loves to talk Durian with me says he knows a guy who knows a guy, and he’s going to see if he can get me a job working on a Durian farm next year. Stay tuned!

Moreover, arrived to-day with an armload of Durian fruit whilst he and a handful of friends were sitting around shooting the shit. They were all amazed that I was able to list off my fave varieties; and aghast when I was able to pound down my entire day’s catch in one sitting. They promptly invited me to join them in a visit a few days hence for a Durian-farm pigout.

Haw haw; the vendor from whom I purchased my Durian to-day was also quite shocked when I told him it’d be of no moment to knock them all out. “Jesus Christ, you are just like that other guy…” He’s met a farang here on the island who eats Durian and only Durian for the duration of the season. Don’t think he’s seen him around this year, however.

Bottom line: Malays, they may be snobs when it comes to the quality of their Durian; but when they find a farang able to exhibit even a modicum of knowledge of and appreciation for their prized crop, the hosannas, from on high will they rain. (For the record: in truth, I’m such a piker when it comes to Durian obsession; but my protests are never able to find purchase with the locals…)

The non-Durianical news will need to be short-and-sweet this time; just too many interesting people here to leave much time for blogging.

In re the temples: still great! 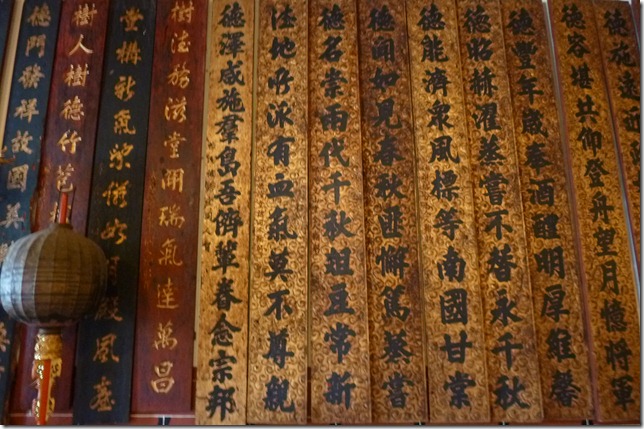 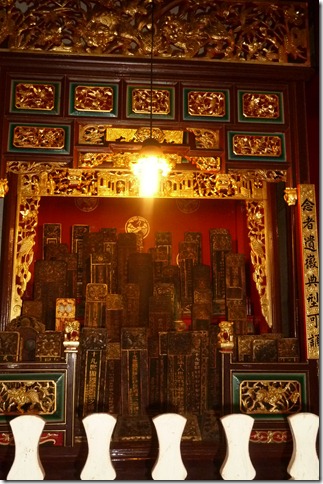 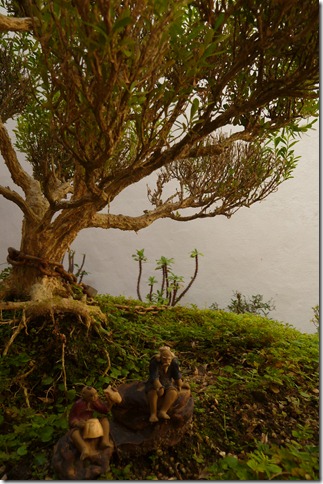 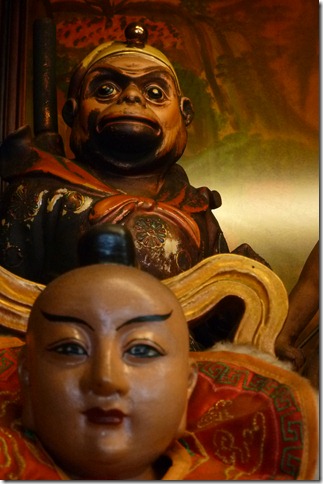 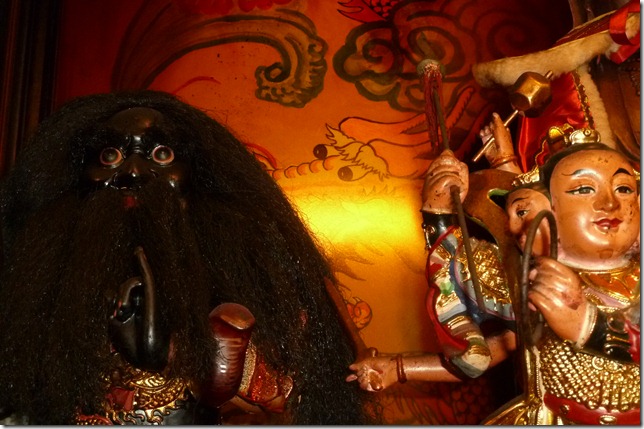 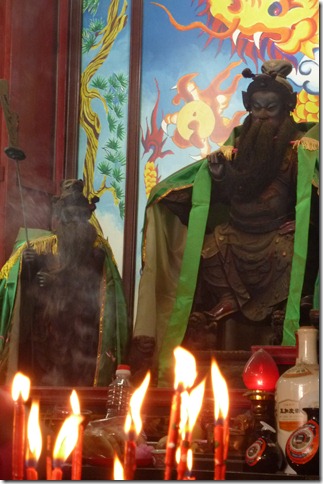 Note to proles: fuck off and die, because, “Executive Committee are selected by Divine through Lord Buddha.” 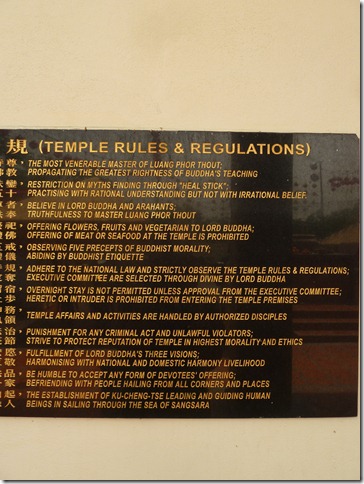 This one temple was having a goddam super-mega smokeout day the other day. I wasn’t the only one brought to tears. 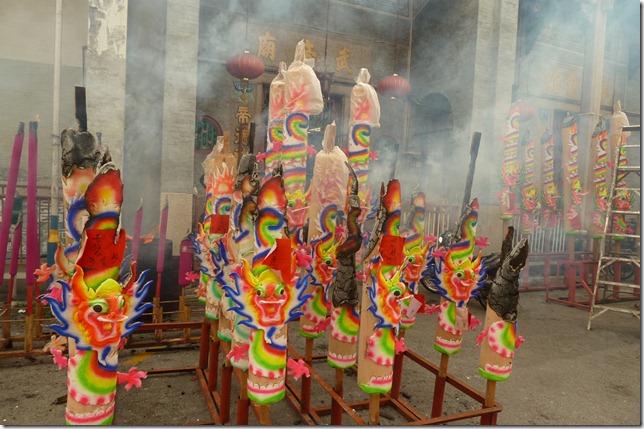 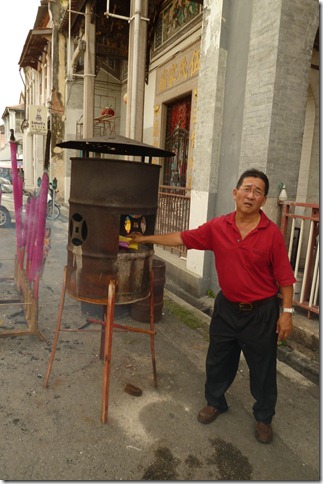 Speaking of smoke, a shoppe in Little India went up in flames yesterday. Huge throng of rubberneckers converged upon the scene to see what was what. 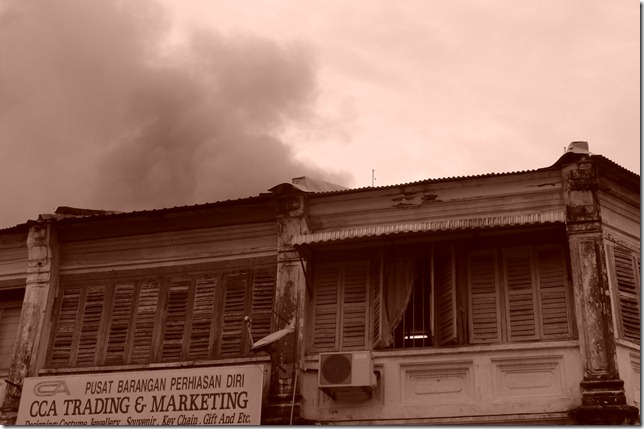 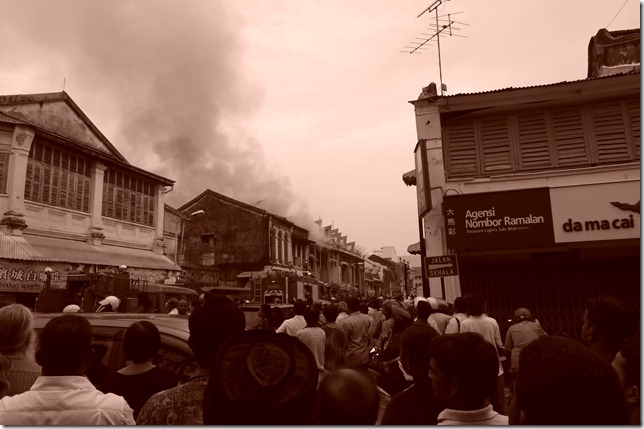 In re the galleries: pretty fucking out there, some of them! 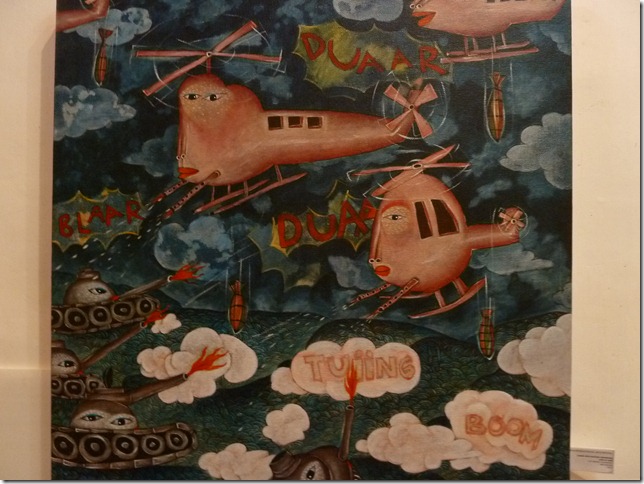 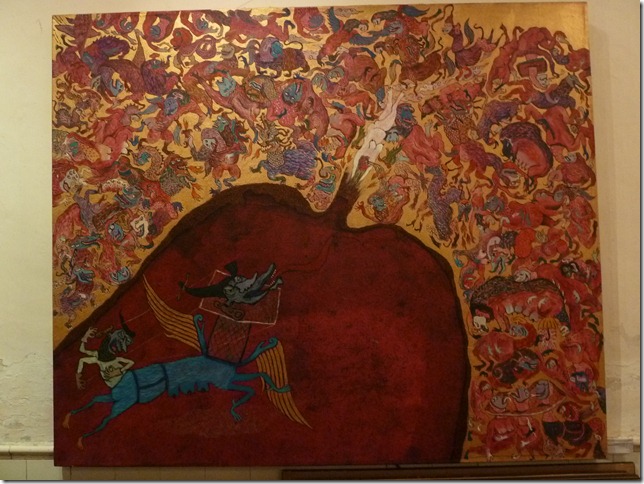 In re the architecture: still cool. 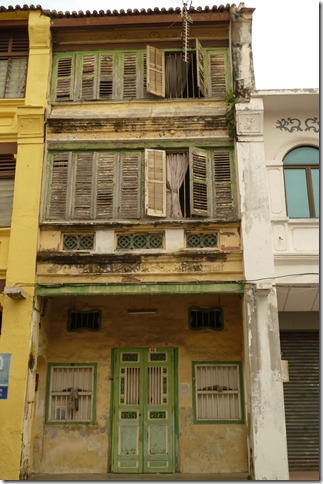 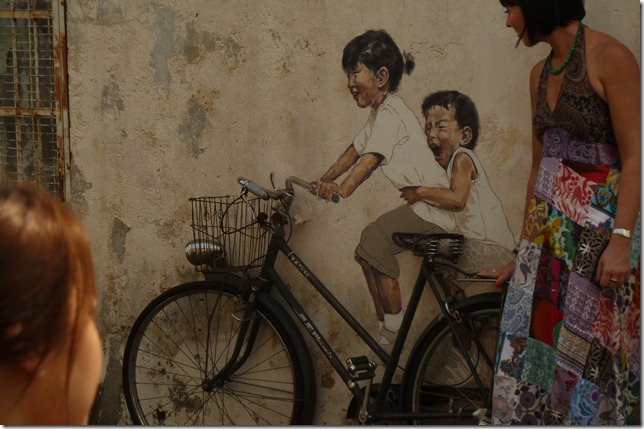 It may well be the number-one tourist destination in all of George Town. Every time I walk by, there’s a big crowd there, each and all waiting to get photographed against the wall. Weird. 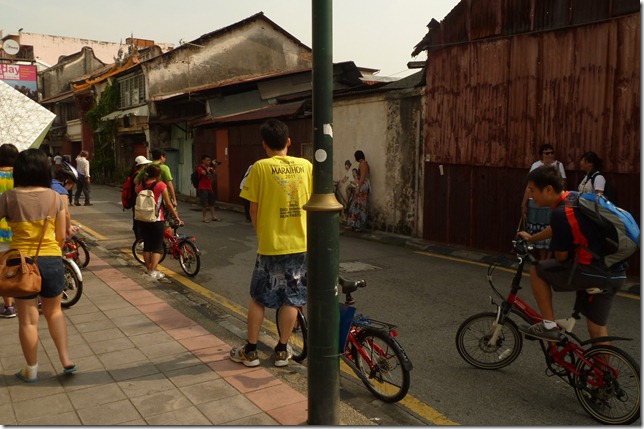 From the Nothing To See Here Dept.: 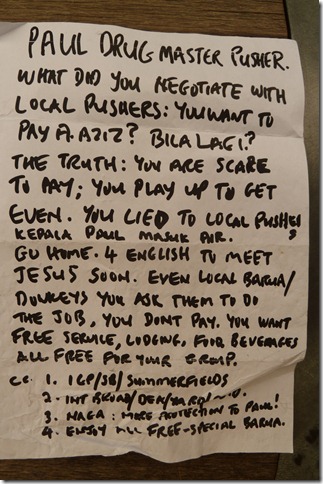 Doesn’t rain every day here; but when it decides to cut loose, it takes the form of a major walloping. 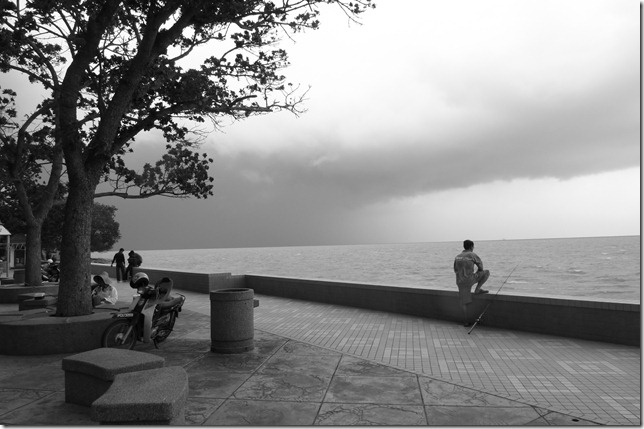 They’ve got these “clan jetties”, five or six of them, jutting out into the sea, with houses-on-stilts built astride them. So each of a given jetties’ houses belong to Chinese immigrants from a certain family. A real step back in time. Best of all, so peaceful way out at the end of the jetties; not a motorcycle to be heardanywhere. 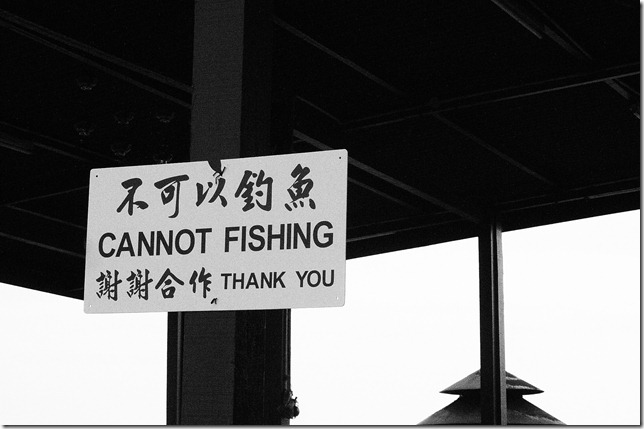 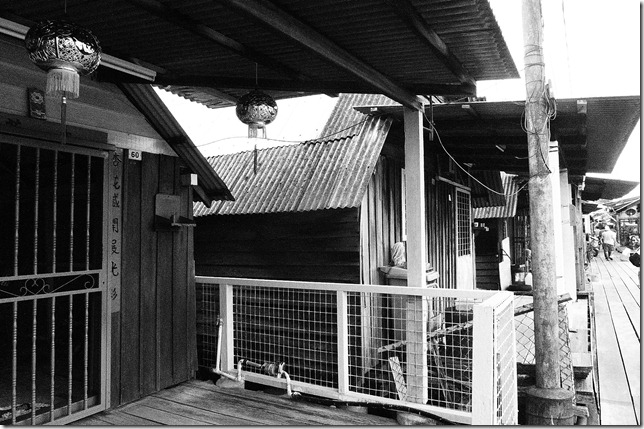 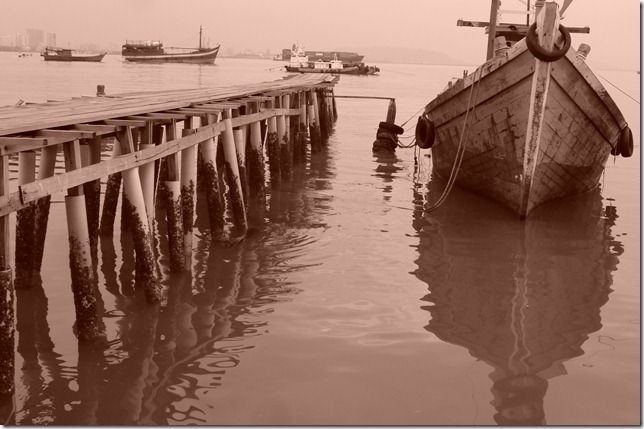 Know what the one on the bottom-left means? Do tell! Best I can come up with is: “No pinching of salt.” 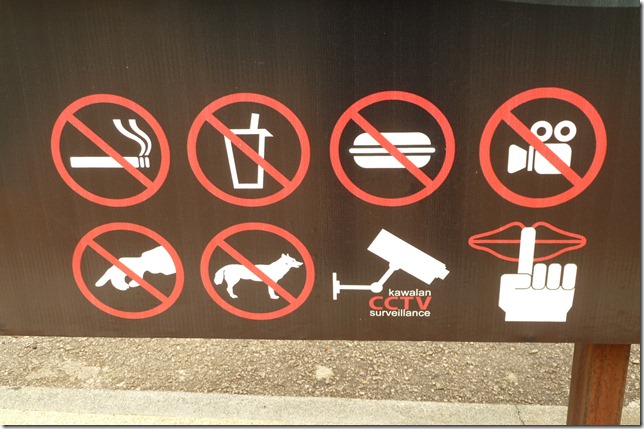 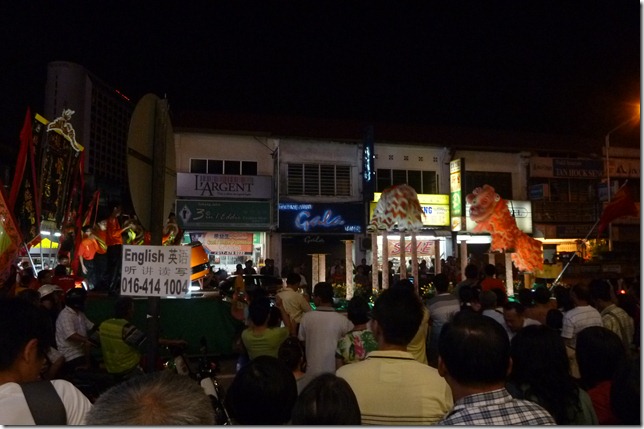 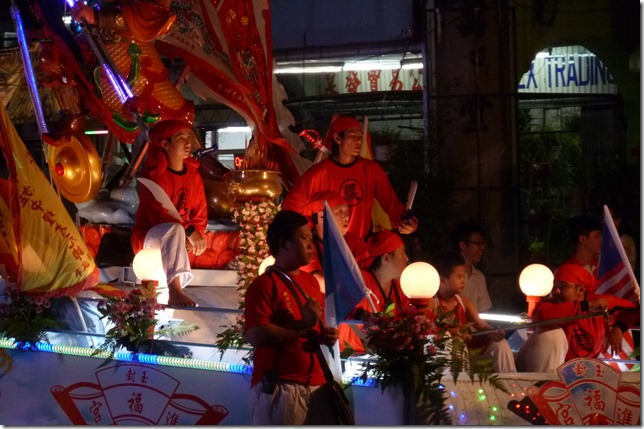 Got the ferry over to the mainland ‘cause I wanted to go to the Bird Park. But when I got there, it was fuck-ass expensive, so I ended up going instead to this stoopid mall, hoping to find some juggling balls. No luck. That’s a friggin’ living embodiment of Hell over there, Butterworth: fucking pavement as far as the eye can see.

Yeah, I was at the Esplanade yesterday, Monday, doing some jumping and hopping and pull-ups and shit; dude (name of “Fadzil”, to go by his work uniform) asked why I was doing that, and I said it was pretty good cardio and so on and so forth.

“But,” he pleaded, “What about the balls?” He executed the universal juggling pantomime.

I think he’s more upset about it than I am, truth be told. I’d only ever juggled over there two or three times; but the Malaysians seem to dig it even more than do the Laotians and the Thais.

Anyhow, while over on the mainland, went to the train station to check out schedules and rates and whatnot, and some drunkards on the steps were giving me shit for my bare feet (but in a friendly way), and trying to let me buy a cellphone for 30 RM, and stuff. Dude kept hassling me, “My friend! … My friend! … My friend!” Every time I wanted to go, he had some new worldly piece of advice to give.

Finally, at the end of my rope, I turned back and snarled, “What?”

“I love you very much.” Made my god damn day. I loved him very much right back, and asked could I take his picture? 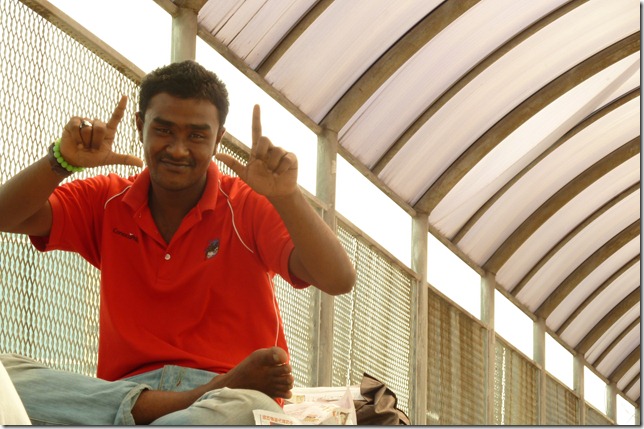 Lastly, another reminder to, come November, cast a vote against the Asshole In Chief. You’ll not be able to read this without retching.

As we observe the 50th anniversary of the Vietnam War, we reflect with solemn reverence upon the valor of a generation that served with honor. We pay tribute to the more than three million servicemen and women who left their families to serve bravely, a world away from everything they knew and everyone they loved.

From Ia Drang to Khe Sanh, from Hue to Saigon and countless villages in between, they pushed through jungles and rice paddies, heat and monsoon, fighting heroically to protect the ideals we hold dear as Americans. Through more than a decade of combat, over air, land, and sea, these proud Americans upheld the highest traditions of our Armed Forces.

It’s not just me, right: Obama’s even more rah-rah pro-military than was Kerry during the 2004 campaign? Such a fucking piece of crap.

This entry was posted in Culture, Current Events, Durian. Bookmark the permalink.

4 Responses to The Delirium