The ride from Amritsar to Delhi took longer than I’d guessed it might. We departed before sunup, and arrived after sundown. That’s a local bus for you – but it was also quite inexpensive. And, being the only gringo on the trip, I drew plenty of attention from my fellow riders. In particular, during one of the layovers, two nurses asked me to stand with them for a photo; and my seatmate recommended to me many locations to visit, always careful to impress with photos from the web.

But people were friendly in general. Which I’ve found to be true throughout India so far. I had bridled myself for the opposite, based upon other travelers’ reports – but then, many travelers also report that they’ve found Thais to be unfriendly, while such a suchness couldn’t possibly be further from my experience.

As we approached Delhi, I was distressed to see the smogginess increase proportionately to our proximity. But we arrived under cover of nightfall, and, well, there’s just something magical, ain’t it, being in a pulsating, throbbing, thriving metropolis at night. The sights, the sounds, the smells, the electric thrill of the communal experience always seem heightened after the sun goes down.

They call the Taj Mahal one of the Wonders of the World – but I think it should be Delhi’s Metro system. So massive (six lines, not including the Airport Express – Bangkok, by comparison, has three lines), so quiet, so sleek, so fast. Trains running so frequently. Stations so clean, well-signed and informative, well-lit, well-maintained. And so inexpensive it may as well be free: A thirteen-station journey, for example, checks in at thirty-three cents! Are you fucking kidding me?

The very qualities that make it so lovable, however, also make it extremely popular: The crush of bodies piling into the carriages is so dense that one could, if one so chose, simply lift one’s feet from the ground and surf with the tide right onto the train. The major problem, of course, is that it’s almost impossible to move one’s arms about, so woe betide those who develop mid-trip an itch what needs scratching.

I got the Metro to the train station, and went straight away to the International Tourist Bureau to secure an onward passage. I was worried that it might be about to close — and with both Christmas Eve and Christmas day being official holidays here, that it might not open again ‘til Boxing Day. Turns out it’s open 24/7, including Sundays. But I took a number, which was sixty numbers greater than that currently being served.

So, made the twenty-minute hoof to the hostel, checked in, went back, and the queue had only advanced by twenty people. So I went out and found some Bananas, ate them up, went back, and only ten more places had elapsed. So I went back to the hostel, grabbed some reading material, and returned yet again. Now, the numbers were cycling through more quickly, it being pretty late at night, and many number-holders having abandoned their places in line. So, didn’t have to wait long after that, and was able to book the very train I wanted, no fuss/no muss.

So I was already kind of in love with Delhi. But then, come morning, and seeing how truly awful Delhi’s air quality is, my heart sank low. It’s apparently only the third-worst in India, and doesn’t even crack the World top-ten. But it’s plenty horrible enough. Too bad, too, ‘cause it otherwise looks to be a city in which one could spend several weeks just seeing the sights and experiencing the vibes.

One such sight, which I just happened upon by chance, is this massive Hanuman statue. India’s structures are on such a gigantic scale that this doesn’t even rate a mention in listings. But I for one am duly impressed. 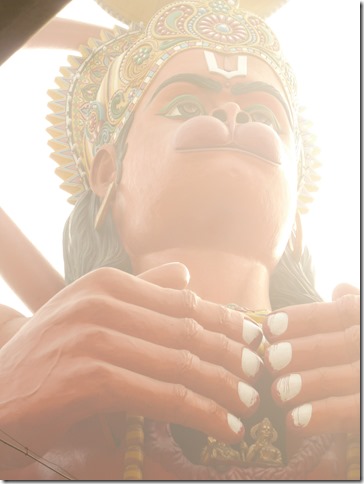 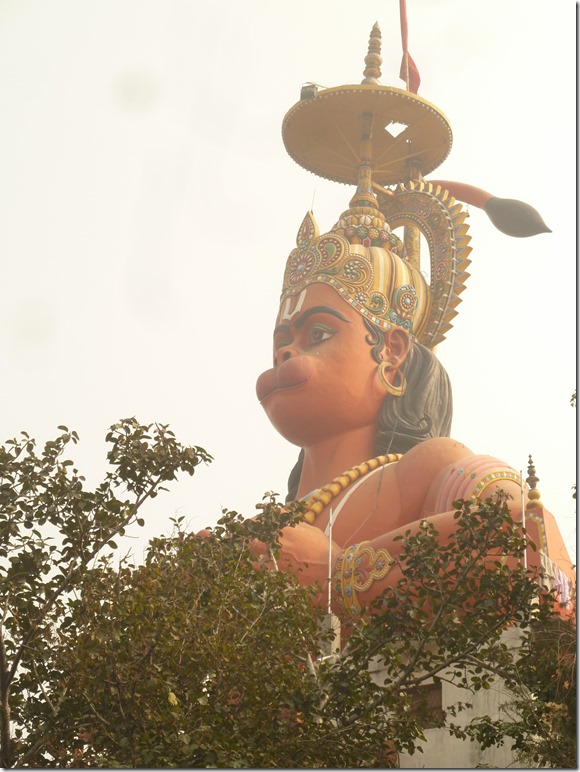 As I say, one could easily spend days upon days walking around seeing such sites, as well as the big-ticket locations for which the city is famed. But, better to try it during the rainy season, perhaps, when the air isn’t actively trying to kill you dead.

I did spend an entire day at the Naitonal Museum here. It may well have been the best ten dollars I’ve ever spent (and half of that was for the camera fee – it’d be five dollars for those who didn’t feel a particular need for photography).

The sculptures and carvings housed here, while not quite in the same class as those to be found at Angkor Wat or Kathmandu, are very great. 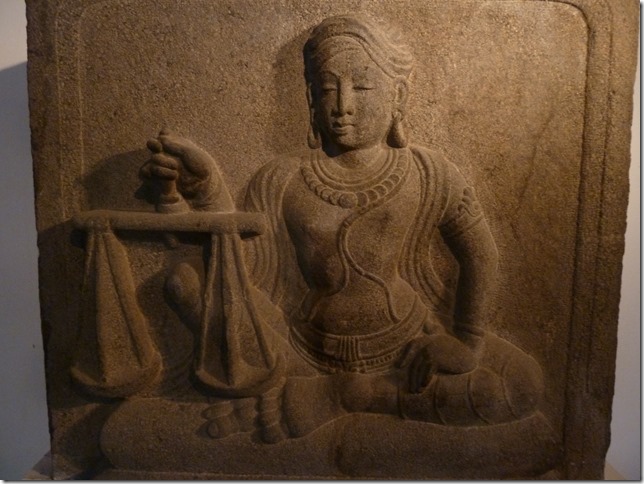 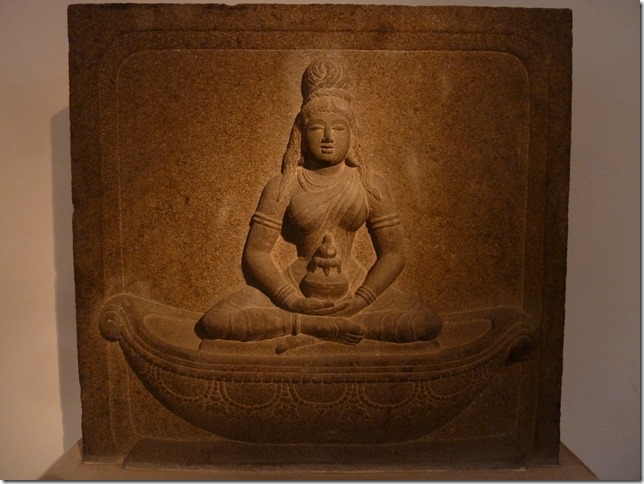 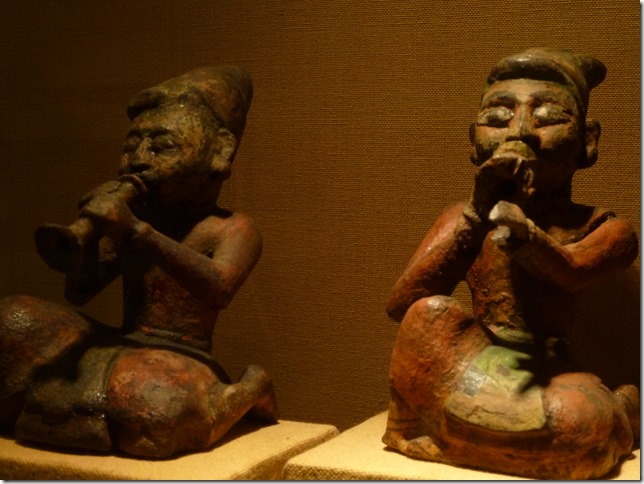 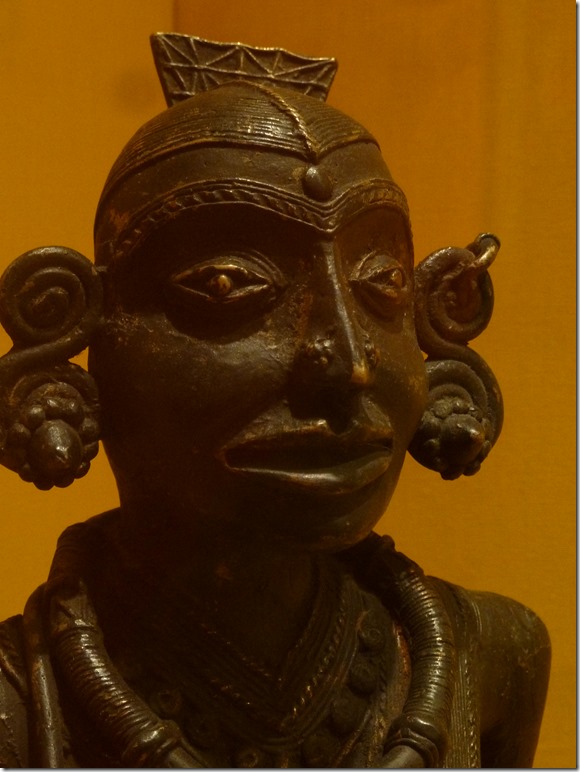 But, c’mon, it’s India, and that means Indian Miniature Painting for all the marbles. The best thing ever, it is. Though that’s only an opinion, and though there are uncountable phenomena to which I’ve not been exposed, I do mean it literally: In my estimation, there is no more masterfully realised depiction of the human experience. And the Museums’ collection did not disappoint – just shaking my head over and over and over again at the impossibly brilliant quality of these works.

They’re all behind glass, which makes photography deuce frustrating. But I took lots, lots, lots, and still lots more. I took so many goddam pictures, I think I developed a mild case of Tennis Elbow (or what). They’re all up there on the Flickr page, if you wanna look-see. But, as usual with these types of things, there’s no substitute to seeing them in person. So get your dimpled ass over here! (Actually, I think there are some pretty big collections in the States as well, if one is so inclined.) Here’re just a very few faves. 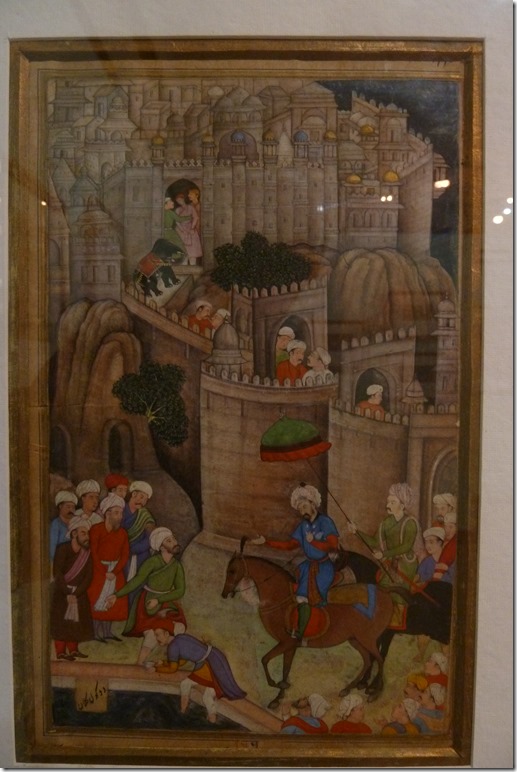 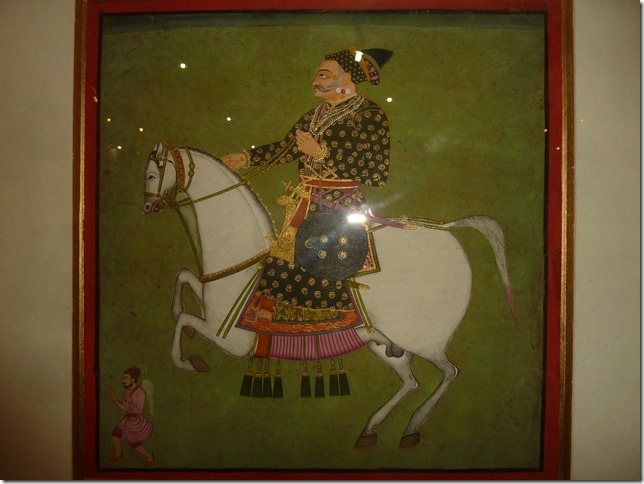 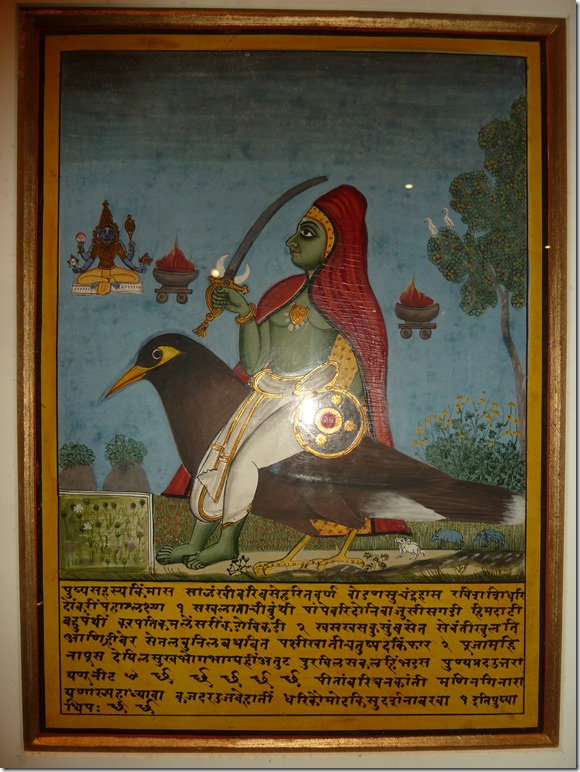 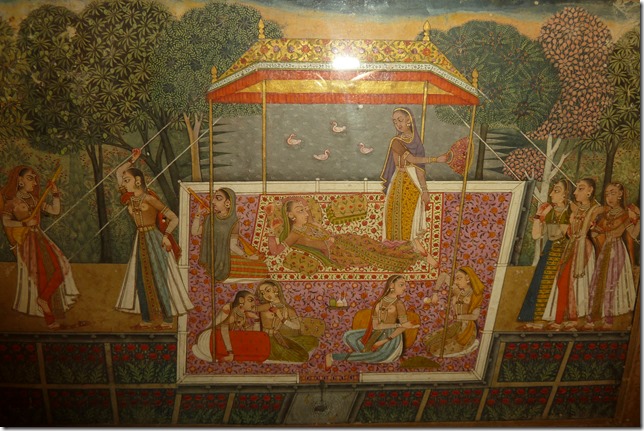 And these, just for the comedy value: 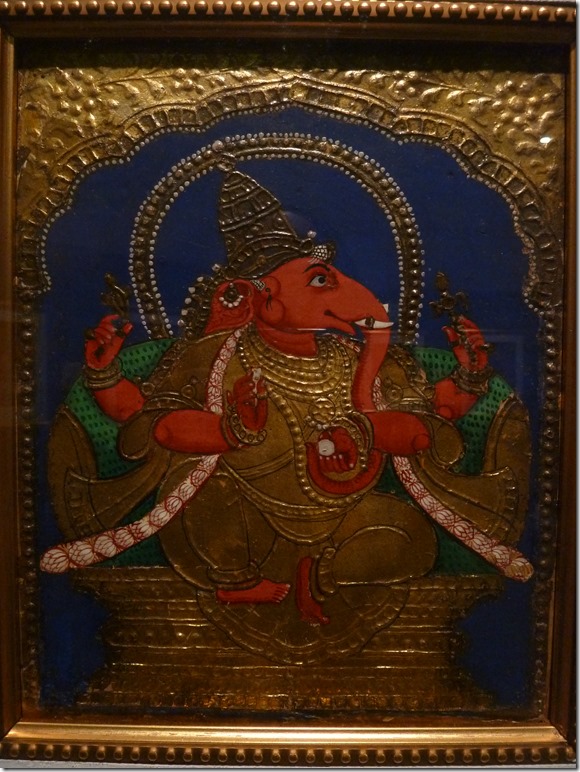 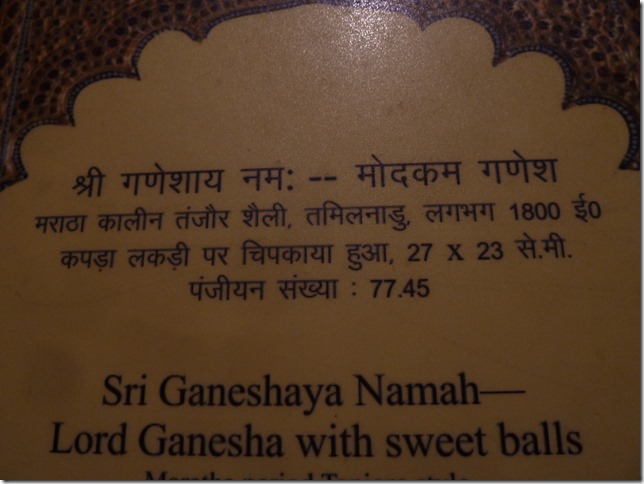 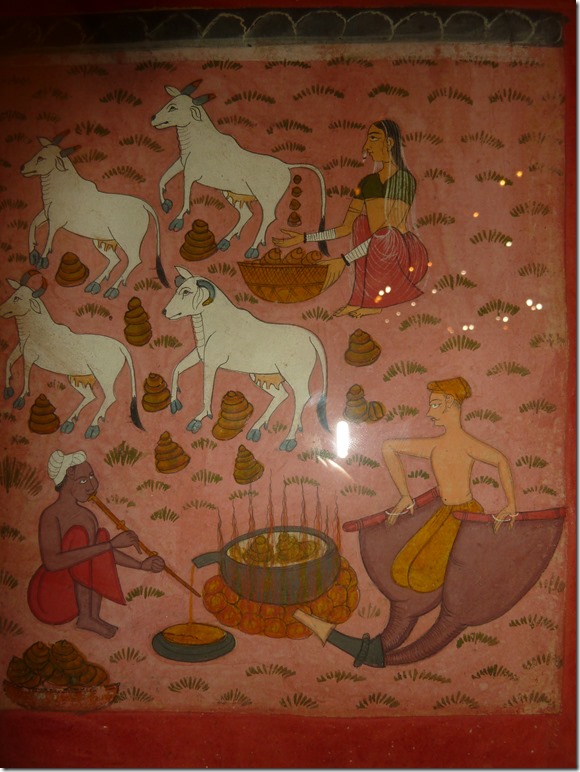 There’s actually a story behind this second one which makes it at least a little bit less weird. If you prefer to remember the scene the way you’ve found it here, then skip ahead to the next paragraph. … So, what the deal was, back in the day they’d feed this certain plant to the cows to turn their shit yellow. Then, they’d harvest the shit and boil it up, and at the end of the process would have their yellow paint. Pretty neat, eh?

In addition to the Museum and whooshing around hither and yon on the Metro just for the fun of it, I did manage to hit the streets of Old Delhi as well. While pretty crazy, it’s not nearly so intense and unsane as I’d been led to believe it would be.

The quantity of goods being transported by human and animal power is pretty staggering, I must say. I think it’s mostly rice and lentils, at least in this part of town. It looks like the leading distributor of the latter is an outfit called “Hi-Tech Pulses” – which screams GMO as loud as anything could. So, welcome to India?

This Chisel Master, meantime, is here all day every day, carving out signs, or scripture, or some damned thing. I could have watched him forever, but he seemed a bit uncomfortable to have the camera trained upon him, so didn’t take as much footage as I’d have liked. He’s especially fun to watch at night, with just the one little lamp to light up his affairs.

Finally, from Amritsar, everything you ever needed to know about how to tie a turban.