[dc]E[/dc]ver wondered what it would have looked like had Monty Python staged the Nuremberg Rally? Well it turns out that this exact scenario plays out nightly just north of Amritsar, at the only crossing between India and Pakistan.

The crossing is not open twenty-four hours, and so the ceremony has, since the partition (except when the two countries have been at war), been conducted every night as the sun goes down and the frontier closes up shop for the evening. Afterward, it’s possible to have one’s photo taken with any of the participants. I wanted mine with this gruff-but-lovable-looking fellow from whom I’d found it impossible, during the ceremony, to remove mine eyes. 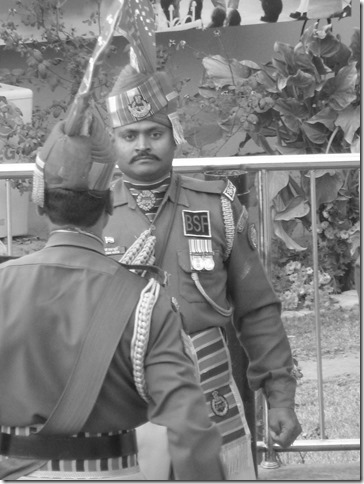 He was hanging around behind, and I had to call him over. Didn’t even realise that this other lady was horning in upon my action… 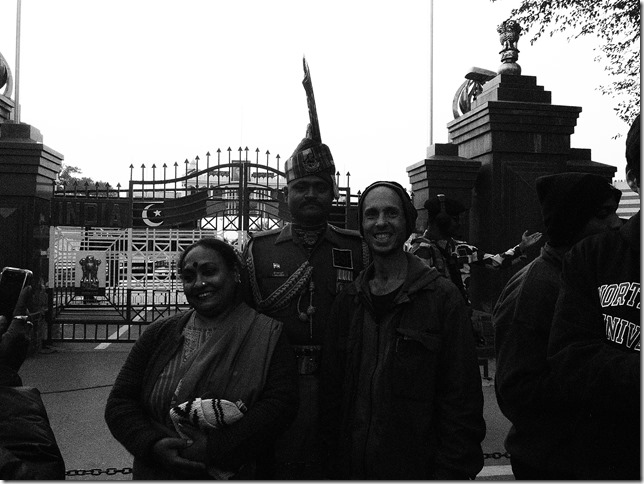 The signage is enough to draw a good old-fashioned guffaw – though I don’t dare think the guardsmen were laughing too heartily. 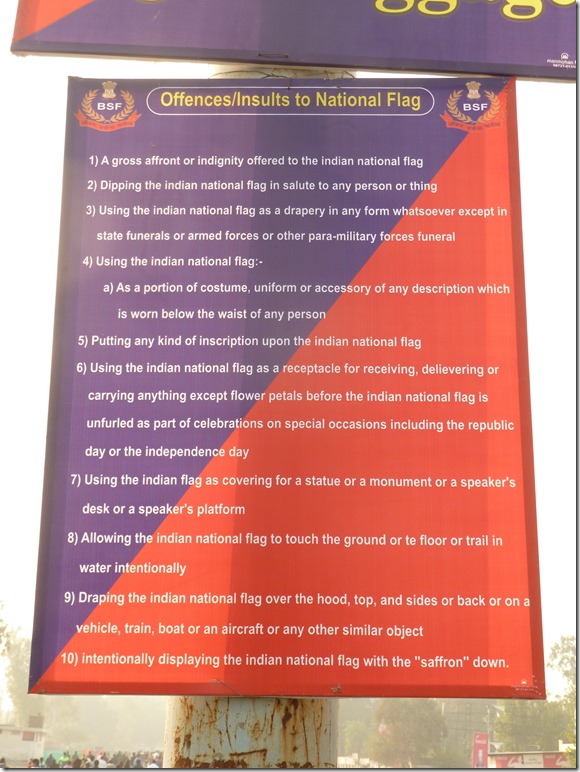 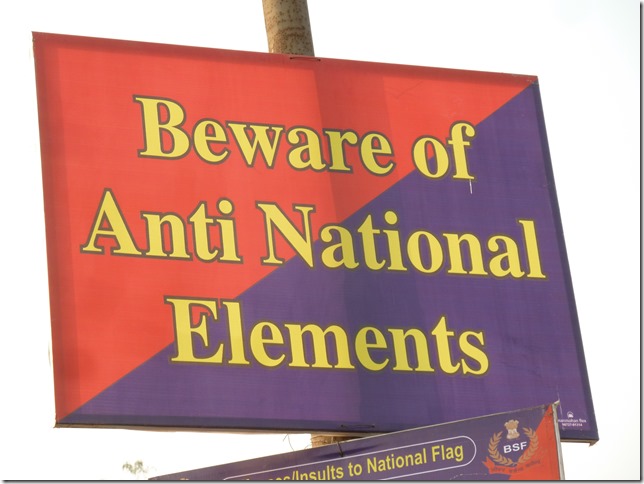 Speaking of Pythonesque, here’s the scene at the Punjab’s most important tourist attraction, the Golden Temple, the Sikhs’ number-one hangout, welcoming enormous numbers of visitors and serving 100,00 free meals daily (prepared by volunteers)… 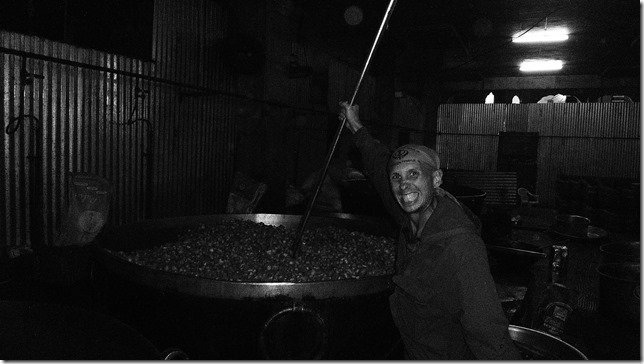 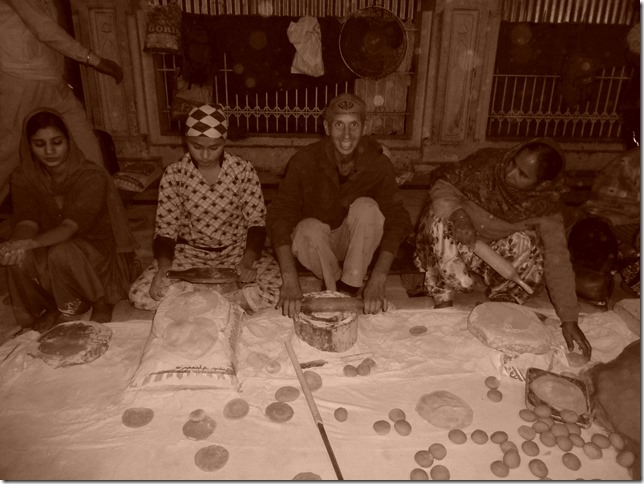 Each night, a ceremony is conducted to put the Sikh Holy Book to bed (from whence it is brought back out — equal ceremoniously — each and every morning). If this ain’t the goofiest shit ever, there isn’t any goofiest shit ever. Yet, it’s undertaken, as you see, in complete and awestruck seriousness.

For still more silliness, the trip to the border closing ceremony is arranged by the hostel, the itinerary also including stops at the staff’s favourite lunch and lassi spots, as well as the weirdest, wackest, goofiest, awesomest temple ever did I see. Basically what it is, it’s a fucking Playland (or what), visitors traversing  up and down ramps and stairs, and around and across and through chambers and canals and corridors and tunnels… 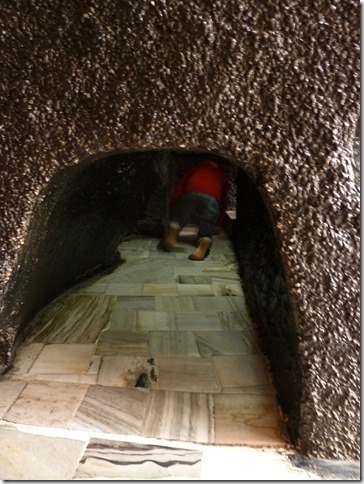 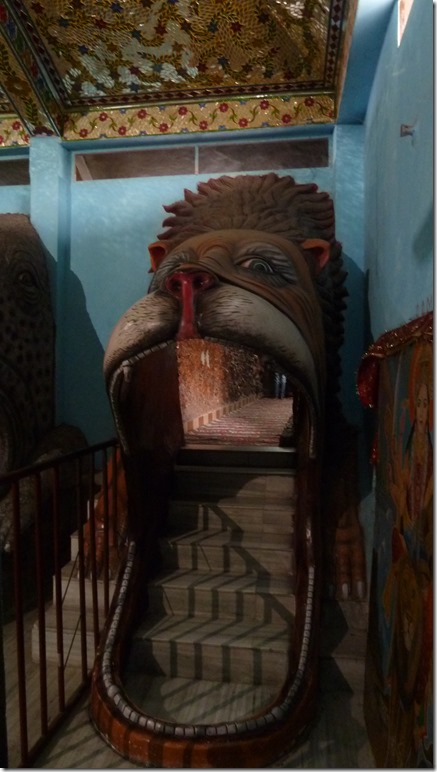 …to gain access to the multitudinous wild and crazy shrines and artworks. In the interest of keeping things at least a mite under control here, I’ll post up only a few of the latter. But do yourself a favour and browse on over to the Flickr page for dozens more. They’re weird and wacky, but also quite bitchin’. And this-here sleeping-Buddha is nothing short of gorgeous. Leave it to a Hindu temple to present possibly the best Buddha image evar. 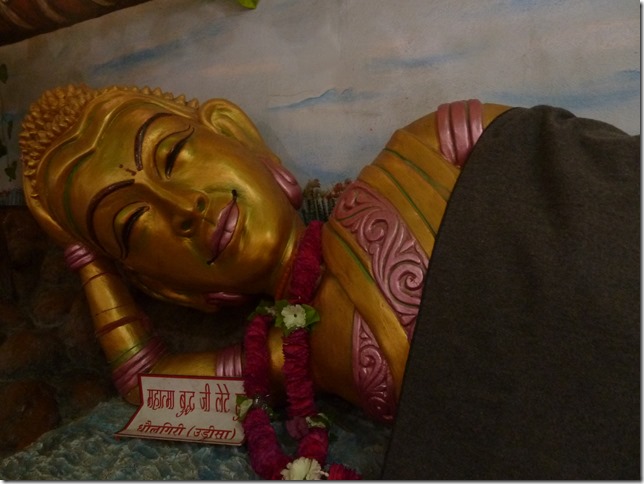 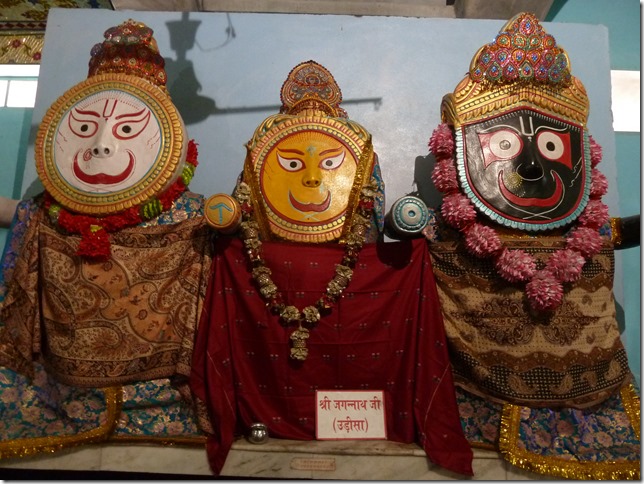 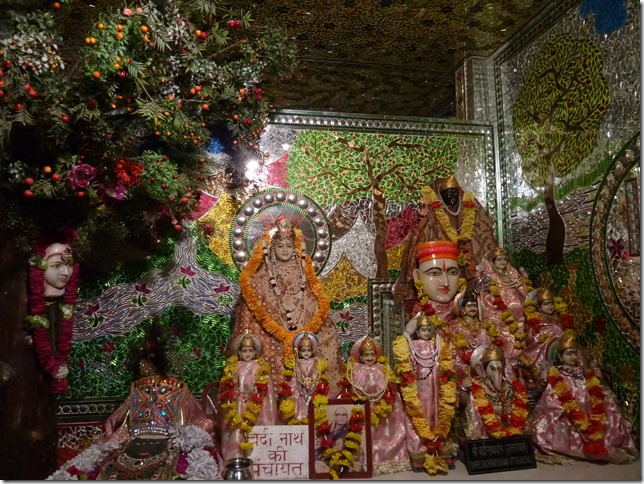 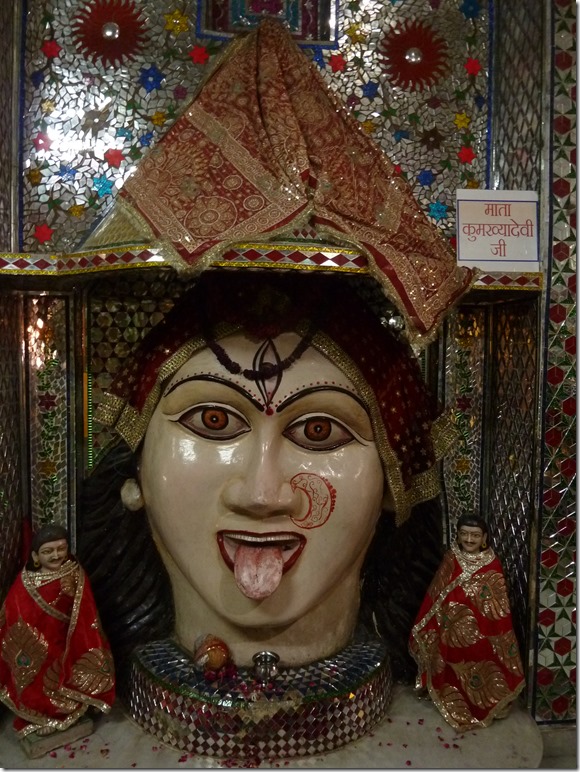 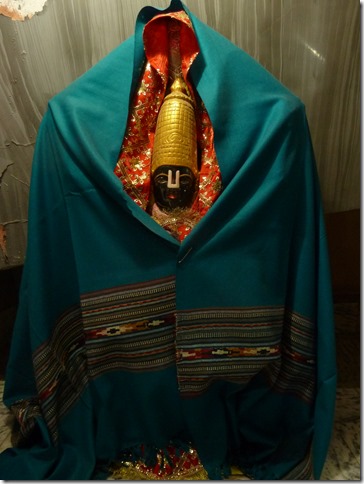 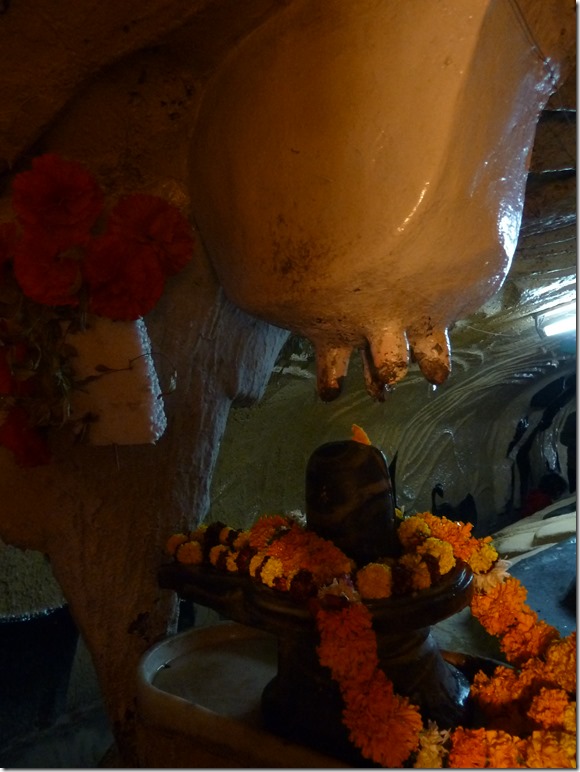 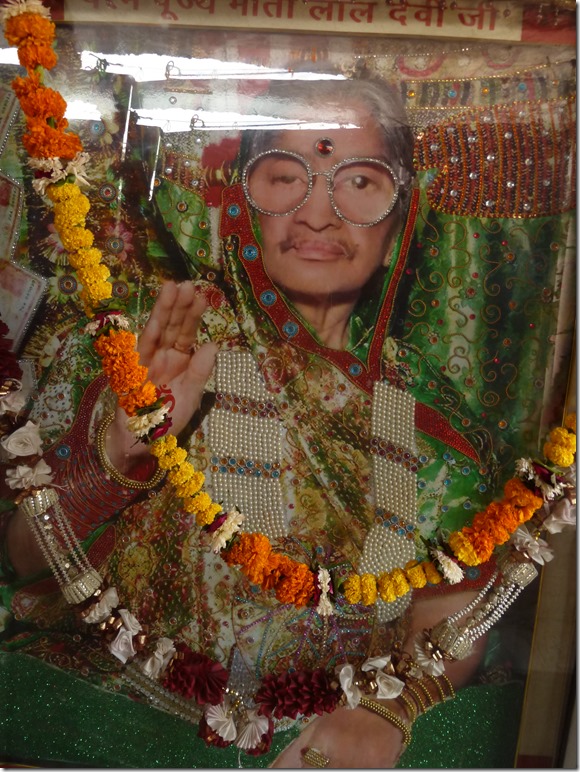 Those teats have water dripping from them, the pilgrims letting some few drops fall onto their fingers, from which they drink it up like nectar pure. In fact, the funniest thing about the temple – much like the Golden Temple’s tucking in of the Holy Book  — is the seriousness with which the proceedings are conducted, as though this weren’t one of the weirdest places in all of the deep/wide World.

Back to the Sikhs, for a moment: Having seen their selves in action, I am able to report that they’re as idiotically slavish as all the other religions’ sheep. Sure, one could argue that it’s all good to have idiots at whom to poke fun. But, when I think about how much money the fucking religious upper-crusteds are extracting from their followers, I just get blind with rage and dream up all sorts of fulminating jeremiadiacal soliloquies. Maybe I could begin to take the Sikhs’ professed populist ideals seriously were they to, e.g., sell off the 750 kilos of eponymous gold lining the Temple’s roof, melt it down, sell it off, and use the proceeds for ecological remediation projects. Well, at any rate, the sumbitch is beautiful when all lit up at night. 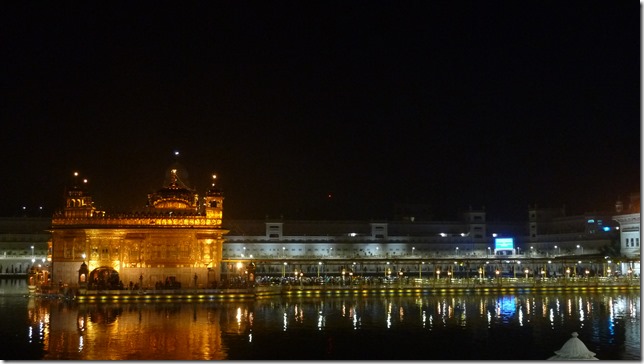 [dc]E[/dc]ven without the goofiness, Amritsar would still be all kinds of badass. The traffic scenarios are every bit as bewitching and transfixing as are Varanasi’s; and, wandering around through the alleys and byways, watching the tradespeople and labourers go about their collective daily thang is an especially delightful treat.

And in case you’ve been missing the Beverly Hillbillies, they’re here, too – come pay them a visit, won’t you? 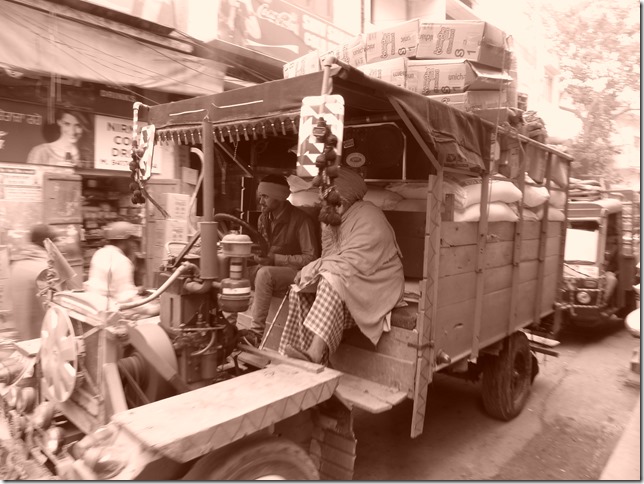 There’s a daily Heritage Tour offered by the city, a nice stroll revealing all manner of beauty treasures which would otherwise have been passed by unnoticed. 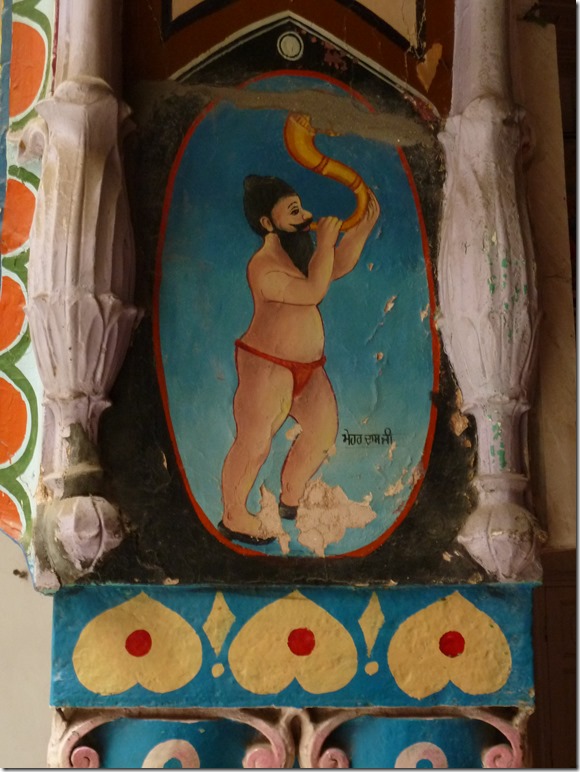 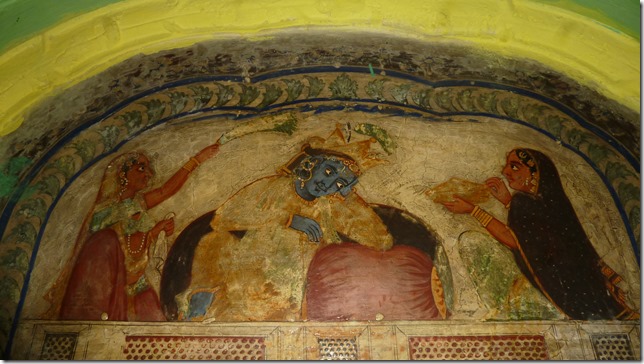 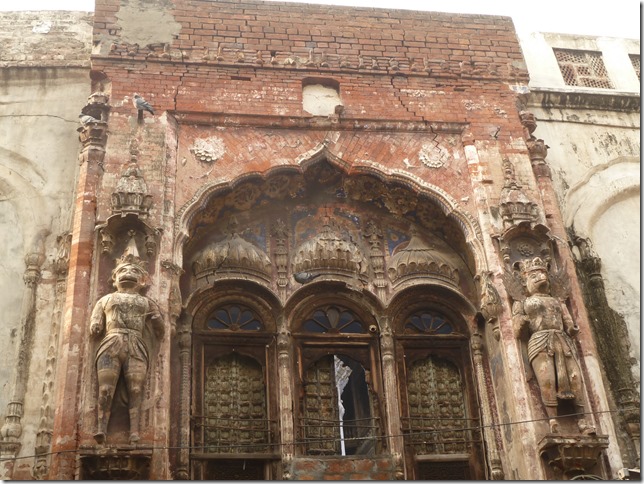 But it’s most certainly possible to stumble upon brilliant moments even when not under the auspices of an official guide-person. In fact, that’s far the most satisfying activity here: Wandering the streets of the old city, imbibing its vibes, and kicking it with the common man. 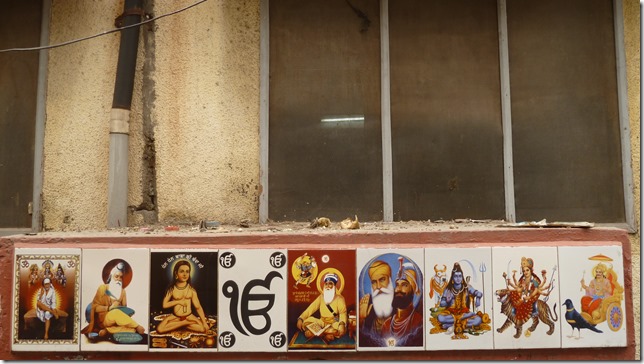 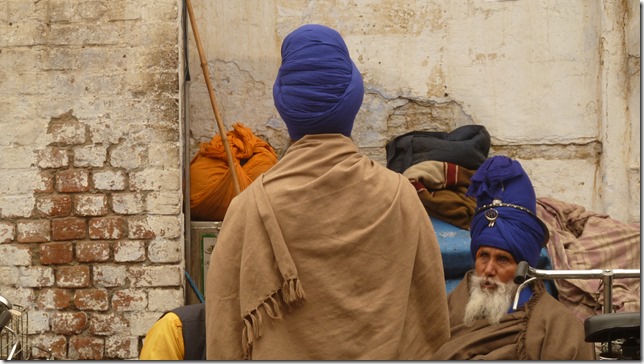 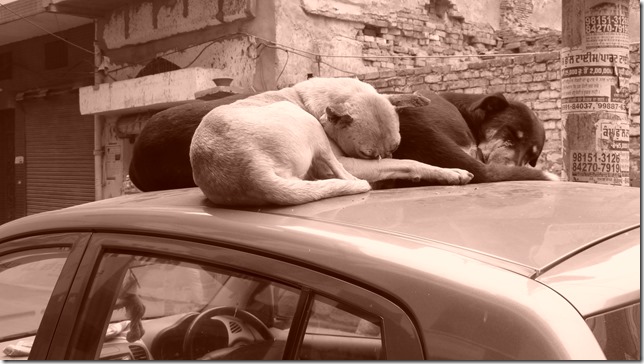 And, yes Mabel, there will be Christmas in the Punjab… 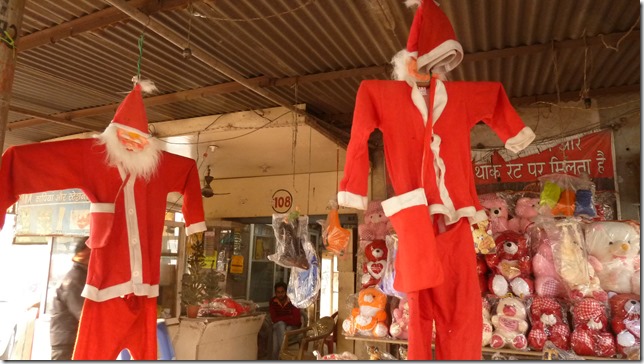 Part 3: Roam For The Holidays

[dc]T[/dc]he problem, though, with Amritsar is that it’s easy to get in to, but not so easy to get out of. The trains here are all booked up months in advance, so, to help smooth things over, a modest number of tickets for each route are set aside for foreign tourists. This so-called Foreign Tourist Quota works nicely – though there’s still plenty of waiting in line and filling of forms with which to deal… 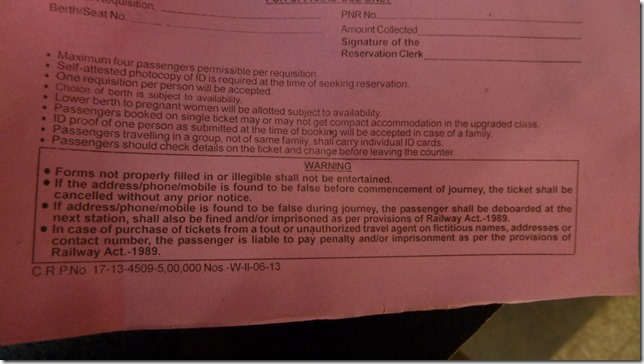 … — when you’re in a bigger city. However, it’s only available for routes departing the bigger cities, so when you arrive to a smaller city, you have to take your chances swimming with the sharks. That means lots of pushing and shoving and line-cutting (it’s respectful, but can get confusing) in the queue for the other last-ditch, the Tatkal Quota. These tickets are set aside to go on sale at 10:00 in the AM on the day before the route’s departure, and are offered at a give-or-take 25% premium above the nominal fare – but they too sell out very quickly.

This very morn, I waited on line in the bitter foggy cold for two hours’ time, and when my number come up, the tatkals for tomorrow’s overnight to Jaipur were already sold out. I’ve still got a waiting-list ticket to hand, so there is hope. But if that doesn’t get confirmed, it may just be Xmas in Amritsar for little old me – or perhaps maybe a bus to Delhi, which is in the wrong direction to the sunny climes, but will have Tourist Quota available. (It’s easy to book buses, or non-heated cars on the trains, but I already posted all my cold-weather clothes back home before departing Nepal, assuming I’d find delectably radiating warmth here in India. Hostel colleagues have been purchasing blankets for their chilly overnights, but, ever the tightwad, I’ve so far resisted…)

Decided I’m not going to stress about the trains, though. There’s too much of India to be able to experience even given many lifetimes’ worth, so may as well just relax and enjoy its pleasures in whichever location one happens to have splashed down. Amritsar is lovely, and the hostel here is in my top-five favourites…but this all-day fog-in pattern is beginning to wear me down.

Well, I may not know where my dimpled ass is going to be seated come Christmas Day, but there’s absolutely no question to what it’ll be jammin’ out, n’est pas?

That there is the fuckin’ ticket, is what that is!