The More They Stay The Same

You know those shows where, about half-way through the openers’ set, one finds oneself thinking, “Well, I sure hope ABC Headliner has brought its A-game; else they’s gonna get laughed off the stage!” …And then ABC Headliner comes out and lays such a massive whipping on the llama’s ass that within about fifteen seconds, you remember, “Oh, yeah. That’s who I came here to see, all right!”

Last night’s Bob Mould/Thermals billing was one of these. Hadn’t seen The Thermals live in a good five or six years. Frankly, I’d somehow missed their most recent release, and might’ve even guessed that they’d broken up. But no, they’re still kicking out the jams; in fact, tighter and more rocking than ever. Man, Portland’s music scene is some kind of a something right now, ain’t it? 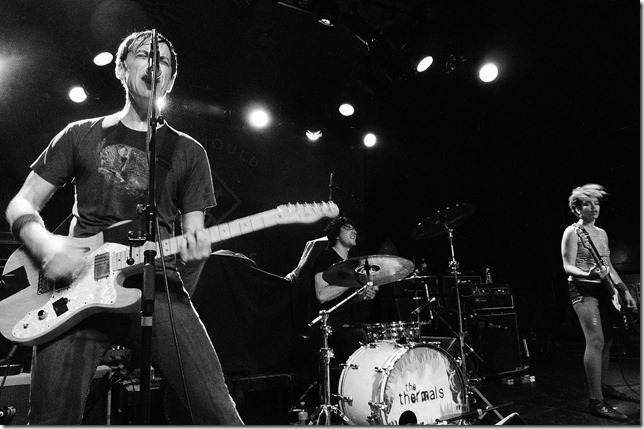 As you know, Bob Mould’s got a new album of blistering Rock And/Or Roll; released, coincidentally enough, on the twentieth anniversary of Copper Blue. So, here he is with us again, having put together yet another Punk-Rocking Power Trio, touring the latter album in its entirety.

Mould himself may be showing his years a touch, looking not terribly unlike a Log-Cabin Republican… 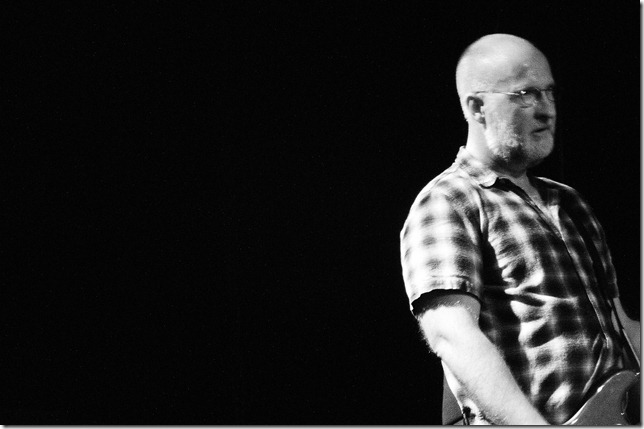 …but, as was to be hoped-for, Jon Wurster murdered the ever-loving fuck out of these songs; proving himself yet again the most captivating performer in all of showbiz. 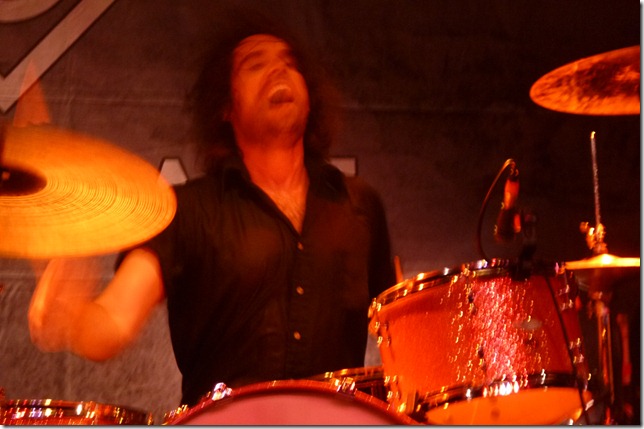 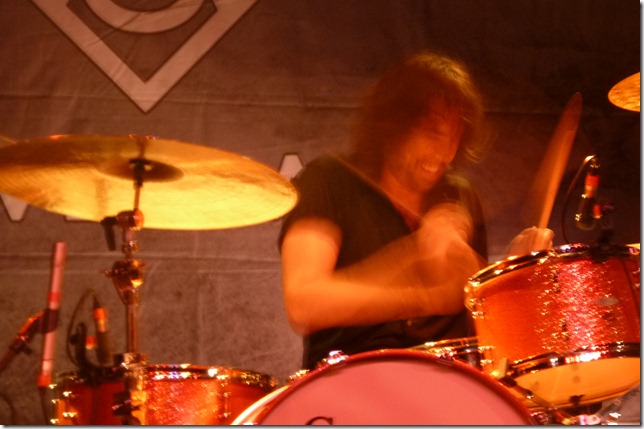 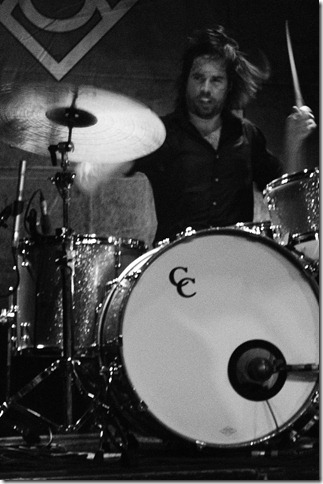 Jason Narducy, meantime, refused to be overlooked, pacing the stage like a caged lion, and and at times even seeming to outplay his two legendary colleagues. 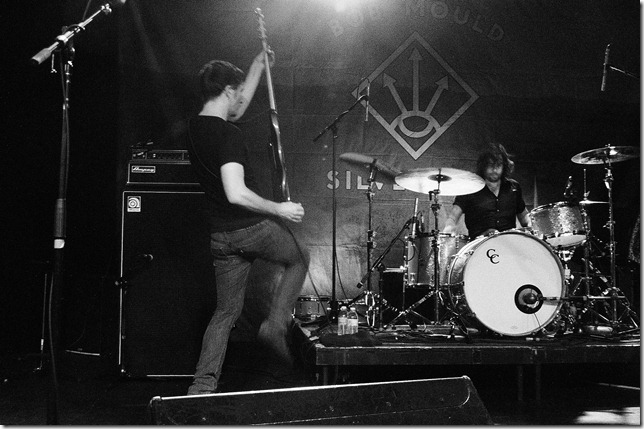 Holy crap did these motherfuckers ever bring the rock! So much so, in fact, that the band’s, well, Raw Power, ended up compromising the songs’ trademark melodicism, while ofttimes burying the vocals altogether.

That’s not a complaint, really: the records will always be the records, and can be consulted at any time. But when Bob Mould puts a crew together and deigns to go out and destroy the eardrums of the world one more time, the one and only conceivable response is: “Yes, sir! No, sir! Thank you very much, sir!” Here’s “Hoover Dam”.

After shredding the daylights out of Copper Blue, the band took a one- or two-minute breather, and tore into a set of songs from the new album. While the new tunes rocked just as hard; this obligatory jaunt did seem a bit like forcing the audience to eat its vegetables before it could have some dessert.

Wouldn’t at all have minded, my own self, had they turned Beaster on its head – its being my favourite Sugar release (and possibly second-fave in Mould’s entire catalog). But, again: Bob had chosen for us our path; we needed only follow.

The audience could not possibly, however, have guessed just what was in store for the dessert course. The set-closing mini-set of Husker Du songs was not surprising in itself. The band’s turning of it up five or six notches for the Husker blowout was not only surprising, but quite astonishing indeed.  While the packed-full audience did its level best to respond in turn — transforming itself into a writhing, leaping, coiling, reveling mass of delirious pandaemonium – it proved impossible to keep up.

Who knew the unbridled fury of the first two sets of music had all been just a little warm-up goof-around session? “Chartered Trips”, in particular, was so molten that even Sleater-Kinney would have been left cowering in its path. 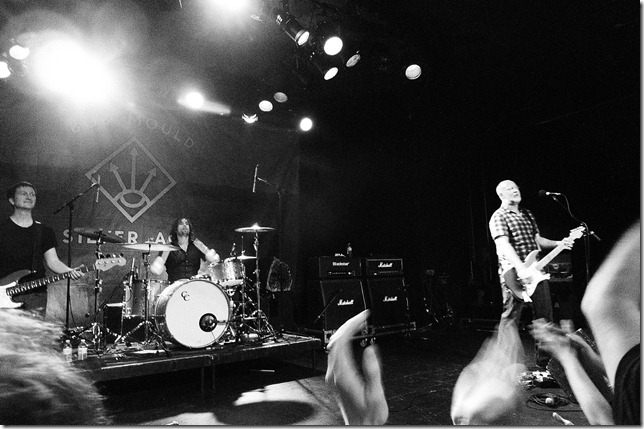 As far as the adoring audience had been concerned, the entire proceedings were to be a coronation of the once and future king of American Punk, returning to take his rightful seat on the throne. But – save for a brief allowance that Copper Blue still sounded pretty decent twenty years later — Mould had wanted nothing to do with Pomp and Circumstance.

When they’d finished, though, he stood alone onstage for some moments, basking in the crowd’s truly deafening adulation. He seemed, in point of fact, on the verge of becoming overwhelmed (though it’s difficult to imagine him not having received an even more heartfelt ovation in Minneapolis three nights previous), before finally giving a thumbs up and making his triumphant exit. 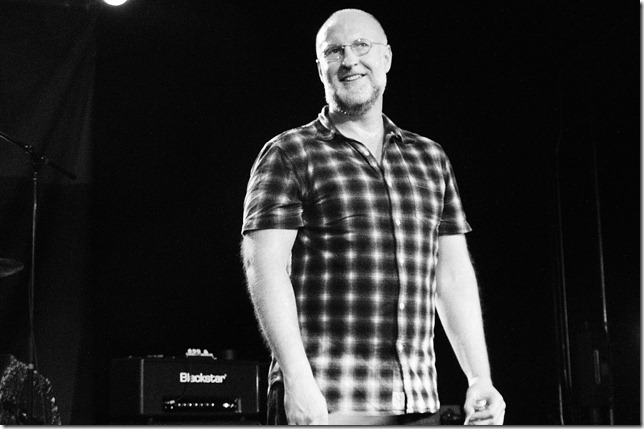 By the way, I recall, some years back, having read an interview in which Mould complained that he’d never wanted to be considered a Gay Spokesman. But, tonight, he even pleaded with the audience to vote Yes on 74.

So there you go: some things do change.