Yeah, it’s…well, first off, thanks for asking. Yeah, it’s…it could be better. I did manage to suffer through Tuesday without Durian. So I figured, every-other day would still get me slimmed down, yes?

Yes, so I et one yesterday, Wednesday. I used the Durian Truck located out near the Boxing Stadium, rather than the Khlong Toei vendors. A little more expensive there, and the Truck, operated by a husband-and-wife team, is not every day in session. But when it is in session, it’s all Stop The Presses This Shit Is So god Damned Delicious! time.

In other words, to-day, Thursday, I et two fruits from the Durian Truck. And though you may expect that I’m all about to chuck the diet; you may just need to re-expect. The diet will live on! Tomorrow is a new day!

But, also. Looking for orchards to which to pay visit, I ferreted out this Bangkok Post piece from a few years back.

At the Suan La-ong Fa (Sky Mist Orchard) in tambon Khao Phra of Nakhon Nayok’s Muang district, over 50 species of the popular fruit, some with names completely unknown to most Thais, can be found. The orchard has, against virtually impossible odds, managed to preserve some near-extinct durian.

And so I sez, “Rata, does this place accept visitors?” Given this loan lead, Rata – what a star! – did the leg-work in learning that not only does the orchard welcome visitors; but that on Saturday – two days from now – there’s some sort of festival, or show, or expo, or something going on there. She’s got the directions all written out for me. Couple of hours from here.

It’s a bit of an expedition. The one real catch is that one of the segments is via moto-taxi. Which, not only have I a morbid fear of motorcycles; but speaking as a pedestrian, I find them even more loathsome than their four-wheeled cousins.

But when it comes to Durian, I think, probably, my “convictions” are right out the window. If the moto cracks up and I’m never heard from again; know that it was all in the service of Durian.

So, anyway, the transition to Rainy Season was much less gradual than I’d been expecting. Two days ago was still hotter than the proverbial Blazes; yesterday was cloudy all day long, then, come evening, the sky opened up and belted us a good one. To-day was off-and-on raining all the whole entire time. I did at one point spy one or two patches of blue up there in the heavens. But only one or two.

For better or worse, it did let up enough for me to patronise the Durian Truck.

Yesterday I visited the Royal Barges Museum, over on the west side of the river. I’d had it on good authority that the museum would be worth the 100 Baht admission fee. Uh, no. The boats were pretty neat (not sure why they call them “barges” – they’re ornate long-boats used for Royal processions) and all; but there were only, like, eight of them. Took ten or fifteen minutes to check them all out. It’s maybe worth about 20 Baht, at most.

Worse, though, they wanted 100 more Baht for photo-taking permission. Jeez, talk about a “royal” reaming! Well, it wouldn’t have mattered, ‘cause I stupidly formatted my camera’s card before I’d got the latest batch of pictures from it. Just ‘cause I’m, y’know, stupid.

So that means also no pictures from Wat Suwannaram. It’s located near the museum, and is renowned for the quality of its murals. And they are quite something – possibly even worth making a return trip to re-take the photos. Visited a few more temples, and generally wandered around Thonburi for the day.

Was all excited to then rock out to Lumphini aerobics. I’d missed them Monday owing to the bowling match, then Tuesday with the sore foot. Wednesday would be the day! And then…and then…the skies darkened, the winds picked up, the thunder/lightning drew ever more the near. And the sky opened up wide.

And the aerobics were not to be.

Be that as it may, I do have some media to share in lieu of the lost, and also the never-were, photos. First up, the group pics of Bowling Match 2012, from De Talak’s Facebook. 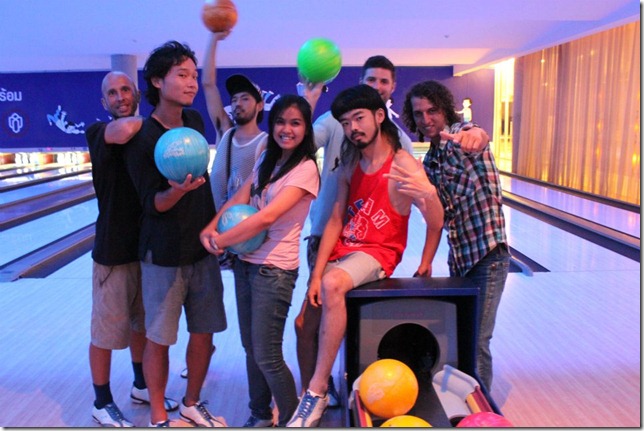 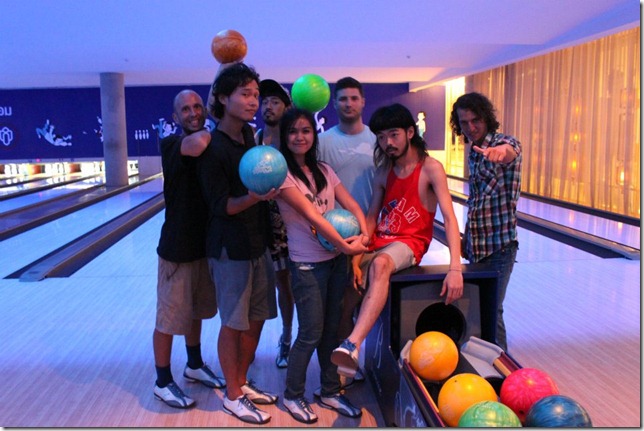 Next, a photo’d been sort of lost in the shuffle. It’s actually from Nong Khai, at Passport Control. I’m in love with dude second from the left. 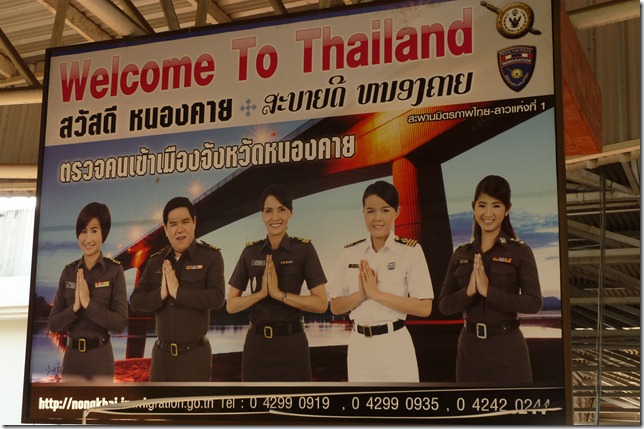 The potty-mouthed Canadian is gone, off to Vietnam. He’s left memories to last a lifetime. But: what of those that weren’t present, and thus no memories by which to revel in his Canada-fied glory? That’s right, motherfuckers: surreptitious cellphone recordings! Hey, if he’s gonna have a loud/obnoxious conversation right there in the common room, it’s fair game to put same on the Internet for alls to enjoy. (To his credit, this has got to be the only loud/obnoxious cellphone conversation in World History that’s actually been interesting enough to circulate Internetside…)

Yowp, you’re gonna love this quite much!