Yesterday, Thursday, was time for the second visit to Angkor.

The morning was all about trees. Specifically, at Ta Prohm – a pretty big temple in its own right; but the gawkers are on-hand to witness the spectacle that is the battle between nature’s insistence and the maintenance (or not) of the built environment. 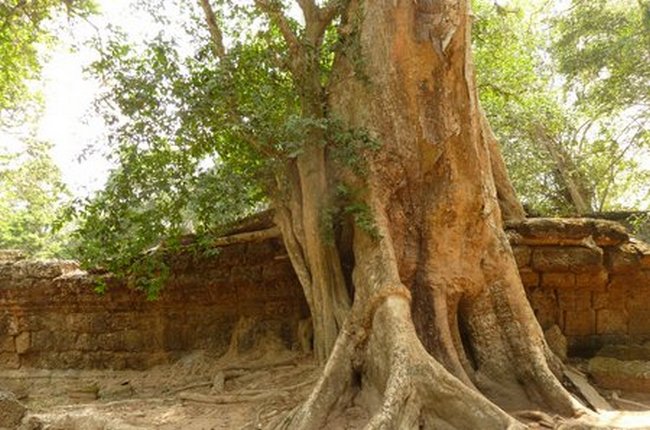 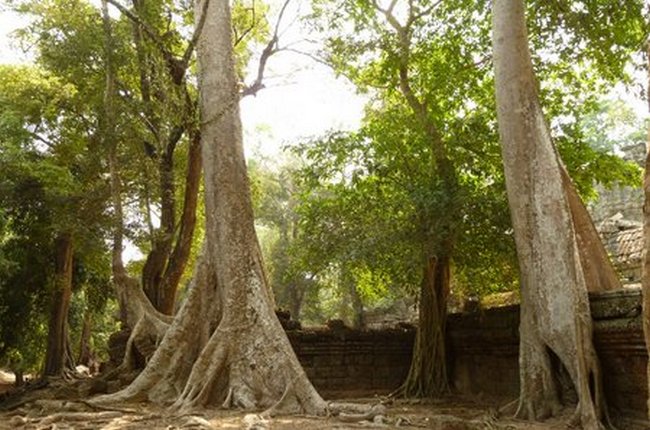 They’re storming the walls! But they’ve also made a serious beach-head at the temple structures themselves. 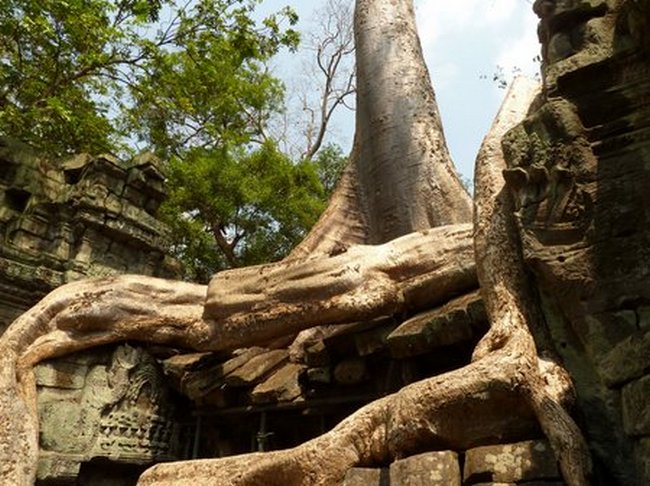 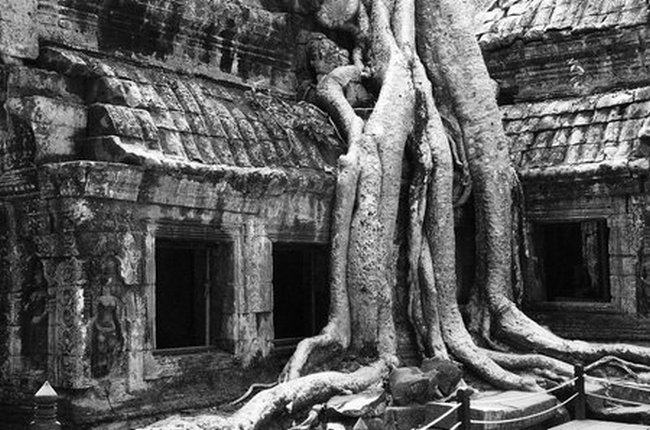 Amazing! Also kind of a problem, ‘cause it’s such a big attraction that it’s difficult to gain a few moments’ time to get a photo without somebody in the frame posing for their own pictures. It’s worth the wait, however.

The vendors inside the park are incredibly insistent – to the point, really, of annoyance. Even right inside the temples, they’re there hounding one to purchase from the some incense with which to properly respect the shrine.

And, what the Hell, some of them are even kind of cool. This guy, when twanging away at his little twanging implement here, would have a look on his face suggesting that he was delivering to the potential buyer an experience superseding even the epiphany. After which, while following one down the path for many yards’ distance, he’d whisper in one’s ear, “Easy to play. I give you special price!”

Unfortunately, he turned out to be rather camera-shy; so his song-and-dance here is rather more subdued than usual.

Later, at Ta Keo, some more trees. As in, “We’re high up above the trees; this is a rush!” 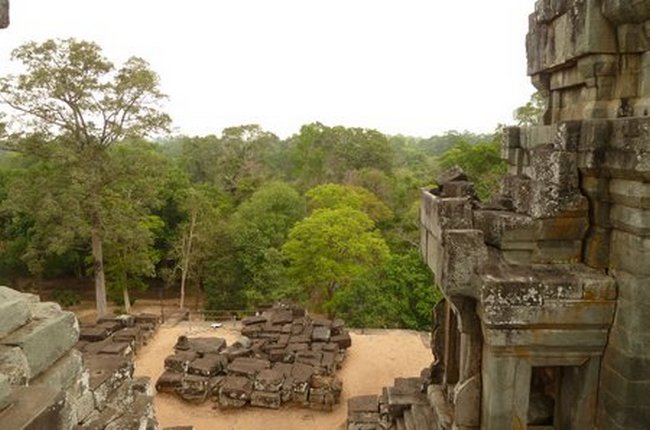 Also at Ta Keo, a cool look up through the top of the central Prasat. In fact, there are many such cool looks to be seen within the Park’s confines – just happen to really like this particular shot. 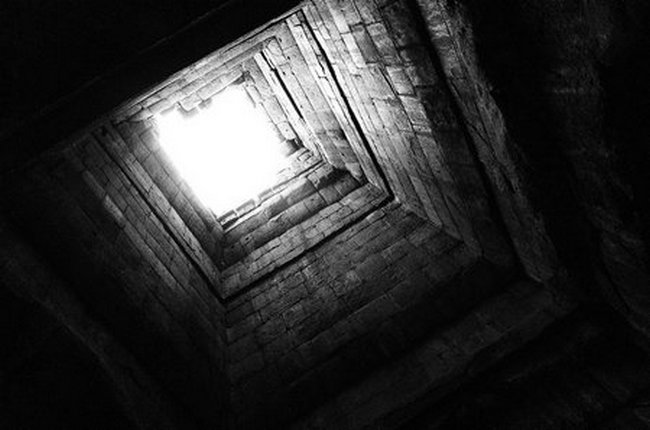 Finished off this area of the Park by catching up with the two missed temples from Day 1. These turned out to be smaller than I’d assumed upon briefly checking them from the road. Small, but quite beautiful structures the both of them (they’re located across the street from each other). 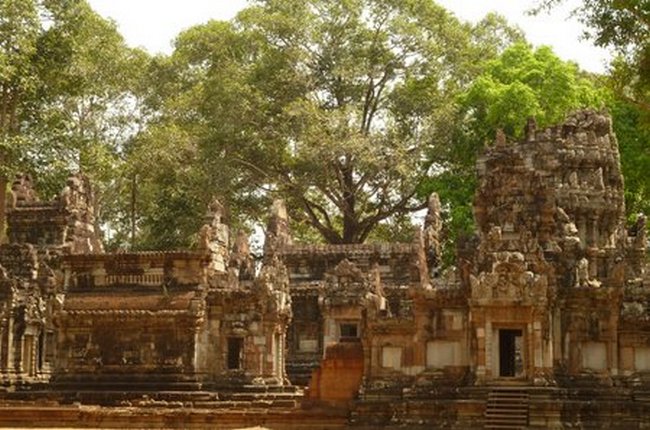 For the afternoon of Day 2, the instructions were to return to Bayon (the first temple in Day 1’s itinerary) and “study” the Bas-Reliefs. Not one to buck authority, I done as I was told. And, man, speaking of epiphanies!

Spent a couple of hours drinking them all in – and may later return for yet more study. 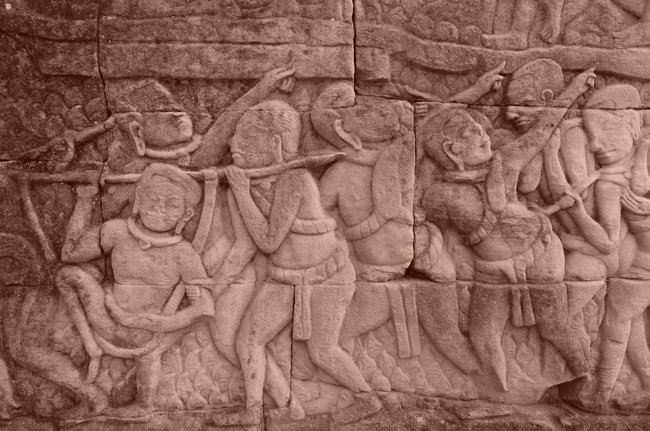 And if you’re into depictions of elephants, there are plenty of these – mostly in the middle of some crazy battle scene, though, the poor fuckers. 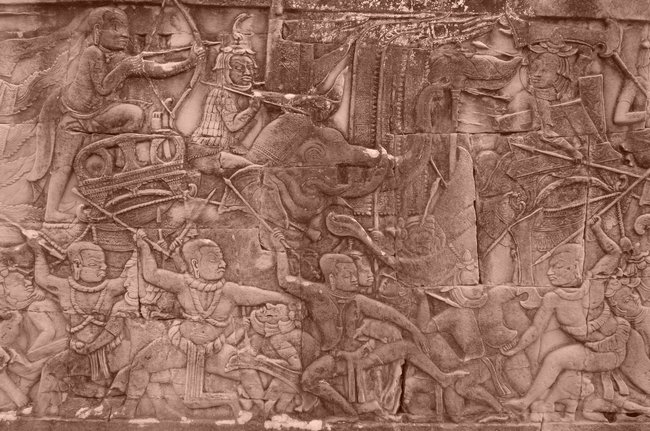 Horses, too, along with plenty of fish and birds. 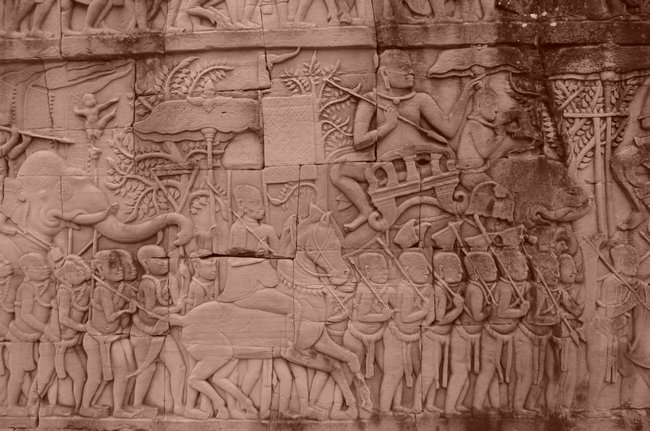 Wow, I’ve not yet even visited Angkor; but feel I could die happy having witnessed these stories.

Last on the list for Day 2 is a visit to the most popular place from which to view the sunset, Phnom Bakheng. And I arrived to this temple at more less the perfect time to do so. But preferring not to ride back to town in the dark, elected to postpone this one ‘til later.

Figure I’ll use one of my two extra days (i.e., it’s a five-day itinerary, and I’ve a seven-day pass) to get a tuk-tuk to and fro’, leaving no worries about sticking around past nightfall.

On the way out of the park, my klutzism reared its head again. Well, more like absent-mindedness, if you like. Was riding on the road’s wide dirt shoulder, and came into the monkey area. Got to being so interested in what they were up to, that I crashed into a post supporting a guard rope. Pinched/smashed my foot between the post and the bike’s pedal.

It hurt real good one for a while, but doesn’t seem to have swollen very much. A little painful to walk on one day later; but I think it’ll be fine in a day or two. Let this be a warning: come to a complete stop before beginning to watch the monkeys!

To-day, Friday, the most interesting moment came while running a gauntlet of tuk-tuk drivermen. Was approached by what I assumed to be another of them; who, instead, first establishments my place of residence, then asked for a big favour.

To wit, he showed me on his cell phone a text he’d received, and wondered would I read it out.

I like gentleman’s arrangement of this old classic. Eerily, I’d had this song in my head a couple of days ago.