We Must Do Our Alma Mater

Well, let’s see here. Saturday, two days ago, I took an extra day off to rest my injured foot. Being gloriously cloudy and breezy, it was a great day, too, to hang out in the park juggling, listening to the temple band, listening to the birds, listening to the distant thunder (only one very loud thuderboom, no lightning, just a smidge of rain — still fun, though), smelling the incense, and cetera. Hardly believable what a difference some clouds and a nice breeze can make!

These people were at the temple. 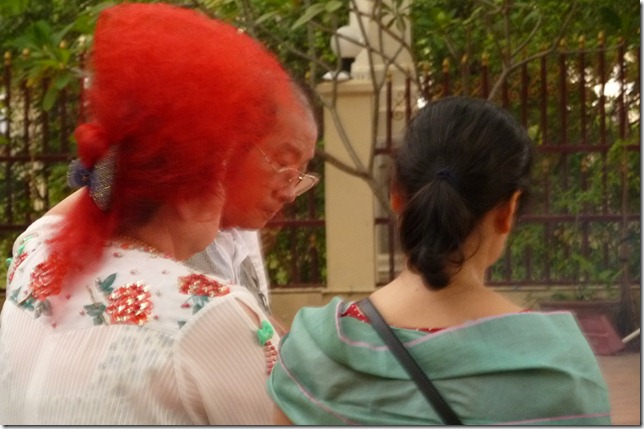 So that was cool. Practically every shopkeep past whom I now walk offers to sell shoes to me. I guess word’s getting out there’s a barefoot farang in town – but why doesn’t word get out he’s not interested in the purchase of footwear? It’s even spreading to non-shop-owning folk. Here’s a conversation I had with a young teenager:

Then he turned and strode off.

So, yesterday, Sunday, was Day 3 at the temples. The itinerary called for the Big Circuit in the morning, then Angkor Wat in the afternoon. But also, on a later day to return to Angkor to study the Bas Reliefs. I thought, why not do both on the same day, and eliminate some traveling between sites? 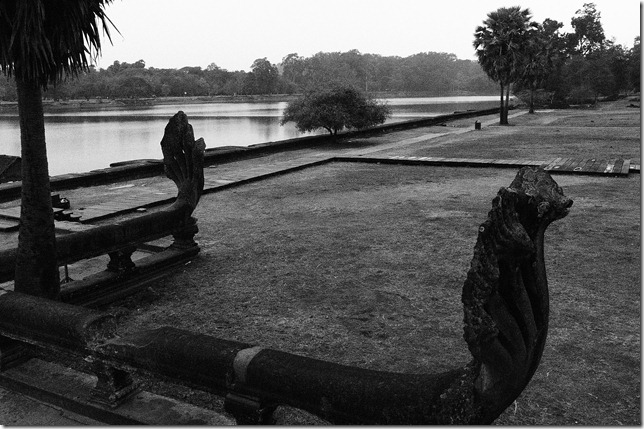 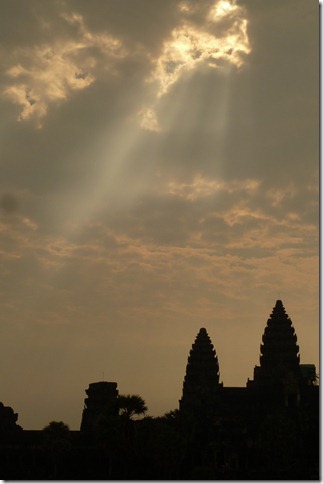 As far as the temple complex is concerned, sure enough, it is quite beautiful. I kept having to tell myself, “This is not a dream; you are visiting Angkor Wat…” 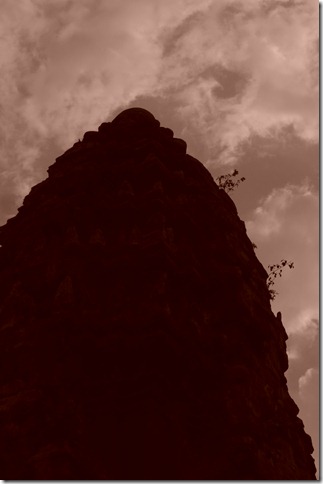 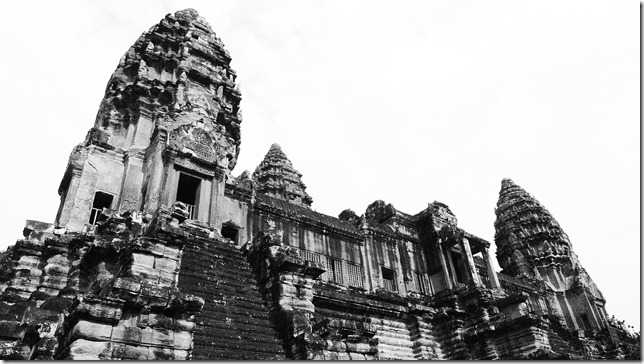 There’re hundreds of these Devata carvings around and about. Fifteen hundred, specifically, if I’m to understand it correctly. 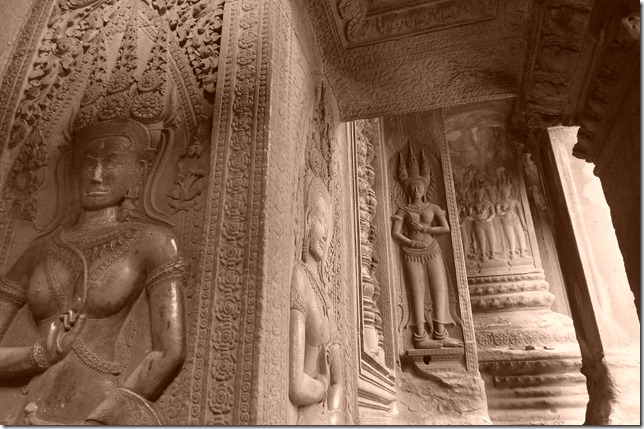 Also, finally, a Buddha not all duded up in modern raiment. 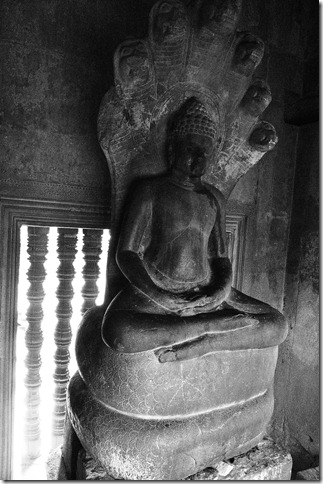 Making the dizzying climb up the stairs (this is the only temple in the Park in which they’ve got amusement-park-style line control for the stairway) affords one an even closer view of the central Prasat (check the bird flying in the upper right). 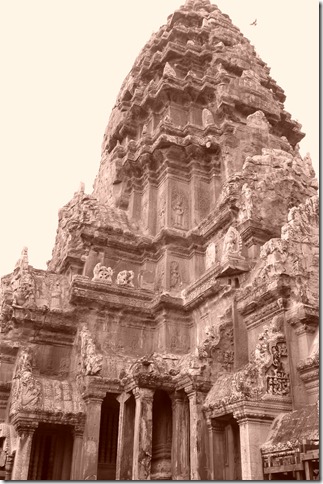 Also, as always, a look down at the treetops. 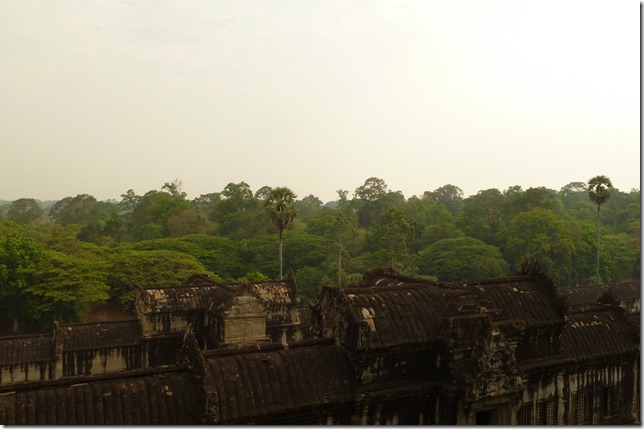 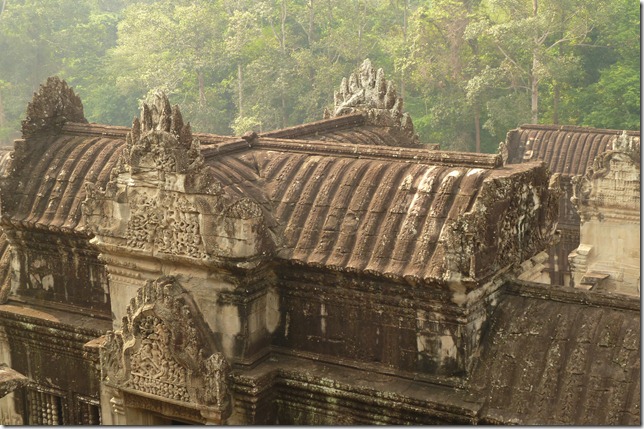 And, what the Hell, an opportunity for an Art Photo (heh heh, I guess I need another visit to the exhibition in Vientiane to remind myself what artistic photography really looks like). 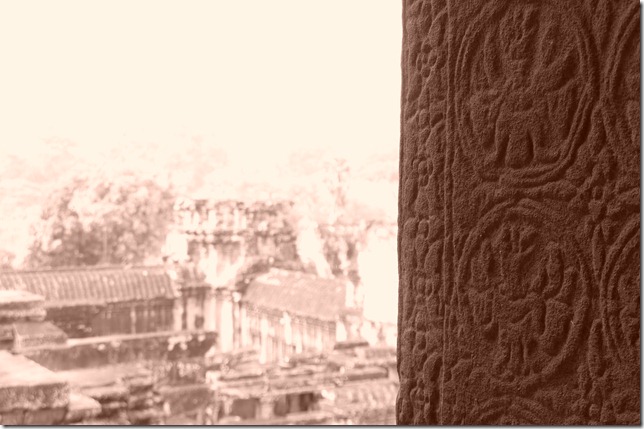 I exited out the East entrance, and walked back to the West entrance via a perfectly wonderful little trail betwixt the outer wall and the moat. 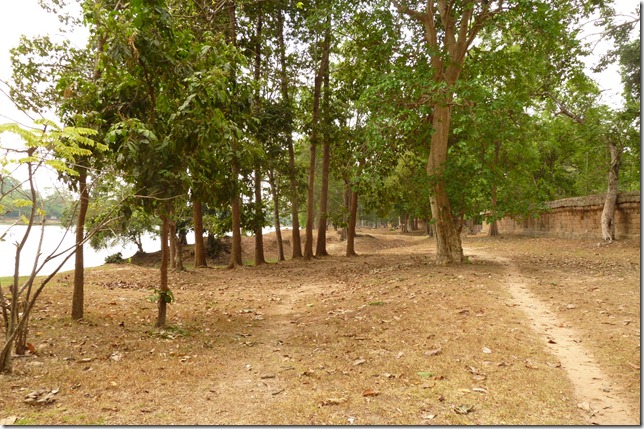 Almost criminal that such a great walk was so under-populated – I saw only two other people during the whole of the forty minutes or so it took to return to the West Entrance. Just myself, the cicadas, and the beautiful trees. 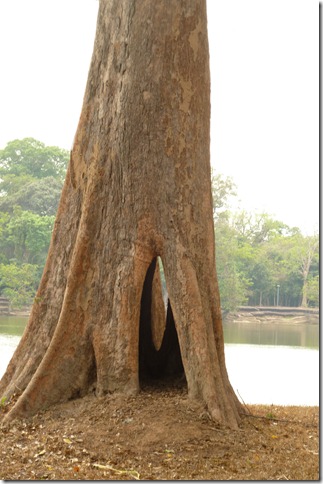 The “moat” is more like a friggin’ river, by the way. However you call it, it’s crazy awesome. 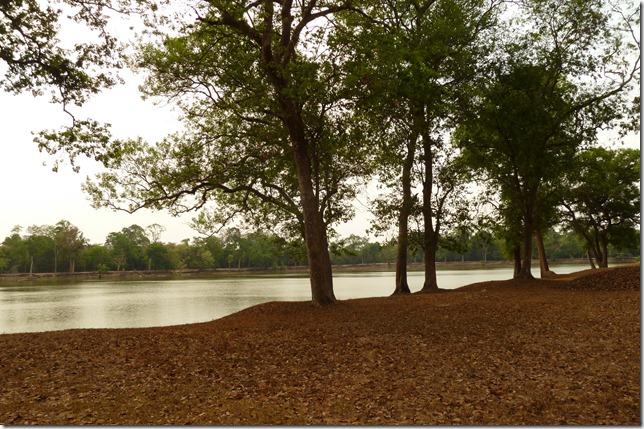 Back at the West Entrance to look around a little more, the fellow on the right here asked me to take a picture with himself and his friend. Sure, no problem. Then he wanted to get a picture with myself. Okay…if you want to… I thought that getting one with my camera as well would be kinda cliché, but now I rather regret not having done. Oh, well. I’ve generally tried to keep people out of photos of the Temples (not so easily accomplished!); but I think they rather nicely add to the ambience in this shot. Well, what I really think is that it’s basically impossible for a black-and-white photo to look anything other than “rather nicely”. 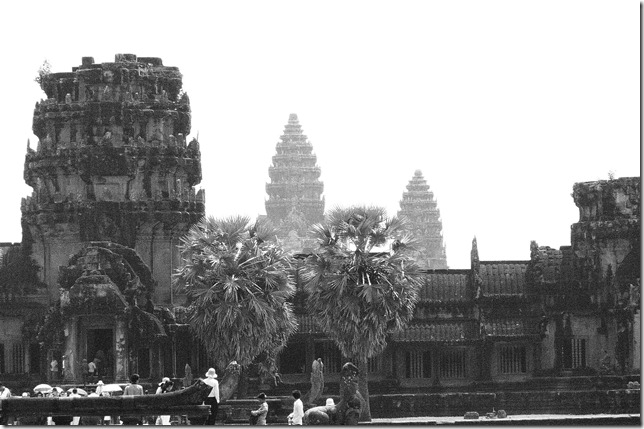 Off, then, to visit a few nearby smaller temples, before returning for the study of the reliefs. What’s this, then? Mausoleum Xing? Entering Derby Zone? Nah, just a speedbump warning. 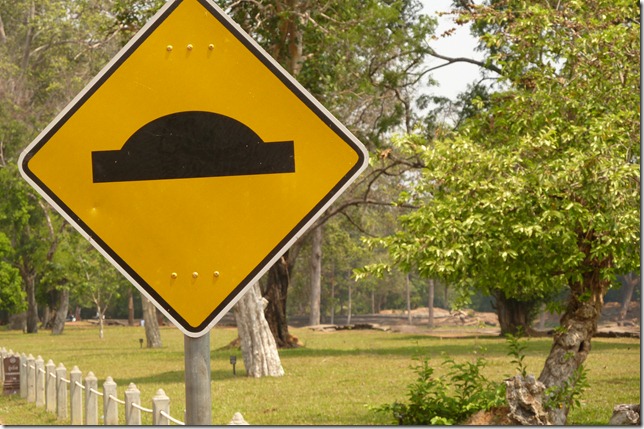 I preferred the Victory Gate to the South Gate, speaking strictly of the gates themselves. But the South Gate’s roadside statuary beat out the Victory’s. Most of ‘em had their heads still attached, and all. 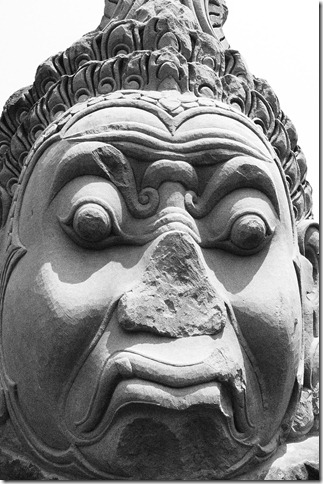 The story behind Baksei Chamkrong is pretty cool. 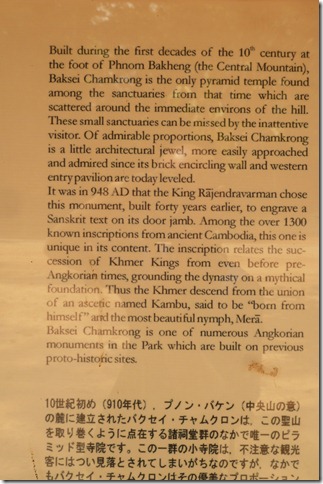 And it’s true about its being a “jewel”…but those stairs are a bit of a fright on the downward direction! Well, I did end up making it all the way back down. 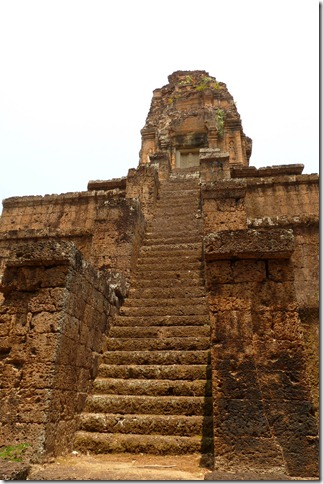 At Phnom Bakheng, another great nature walk winding one’s way up the hill to get to the temple. Elephant rides offered in the afternoons, for $15. My favourite part about the temple, though, was the view of nearby Angkor. 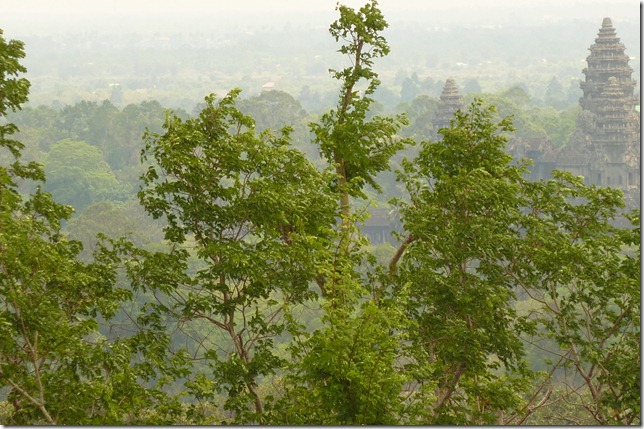 Speaking of which, back to, for the studying. My impression is that Angkor’s murals are not quite as impressive as Bayon’s – though they’re plenty impressive enough. 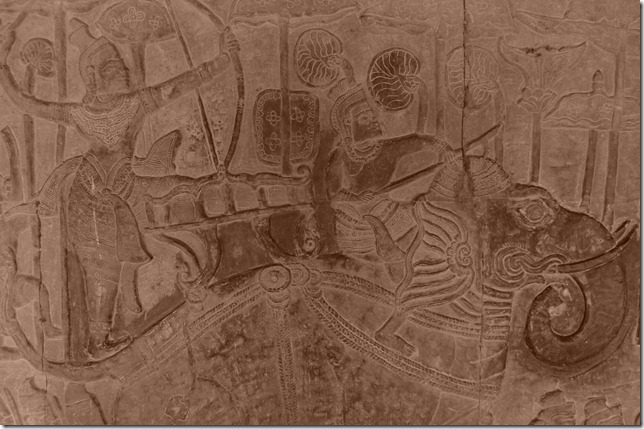 They’re more numerous, for sure. This is just half of one of eight presentations. 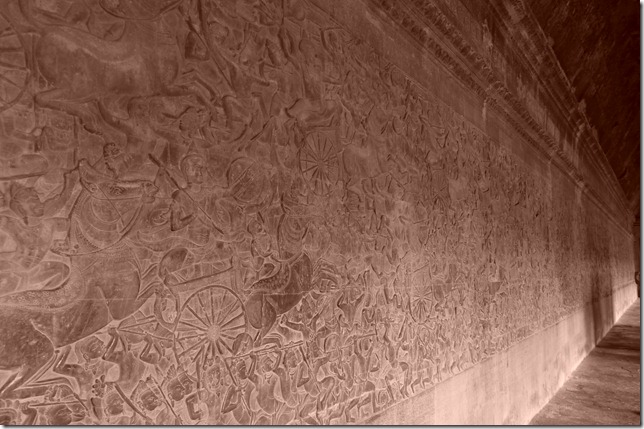 There’s certainly a dark side to the artistry, alas. 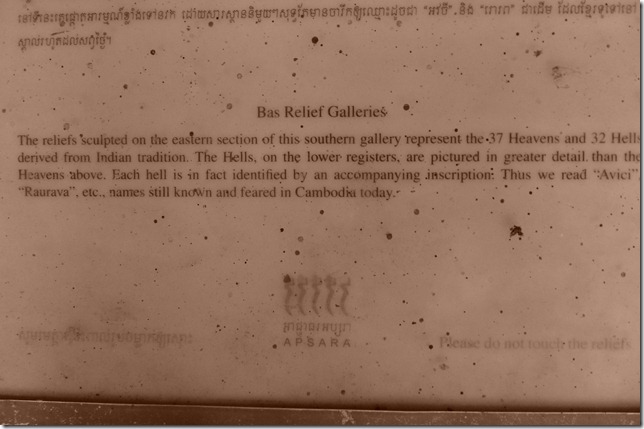 That last sentence says it all, don’t it? Fill the people up with fear, and then bring down upon their heads the whammy. “Why is King living so high, and we so low?” “Shaddup, you’ll get devoured by the big snake, talk like that!” 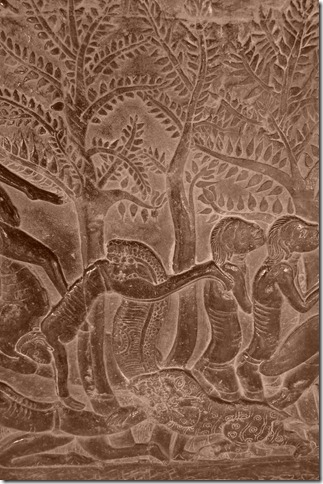 Fucking religion, man. What a scourge. Along this section, a tour guide was explaining that the victims depicted here had killed Holy Men, and thus when they died, had to go in “the fireplace”. At least that was cute.

Also cute: somebody gived him a mango.

It was funny that this was right near the gallery with the scene from the Ramayana with the monkey-man battle. 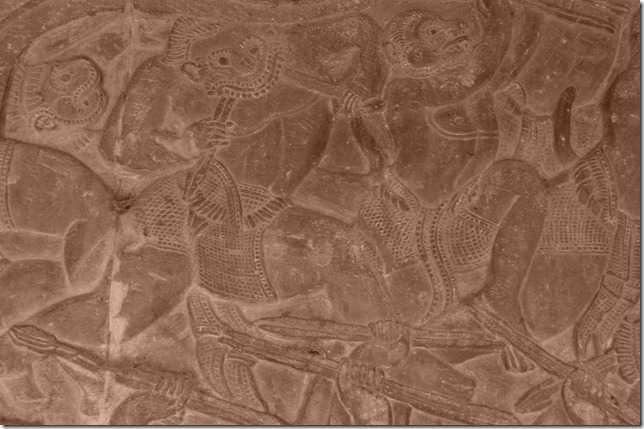 Inspired in me a little poem (probably better advised to skip it; you’ve been warned):

Monkeys in the halls
Monkeys on the walls
Whatever can it be?
It’s Angkor Wat, y’alls!

In addition to monkeys, Angkor’s reliefs have it over Bayon’s in that they include in amongst the birds and elephants and fishes and horses bunches of mythical animals too. 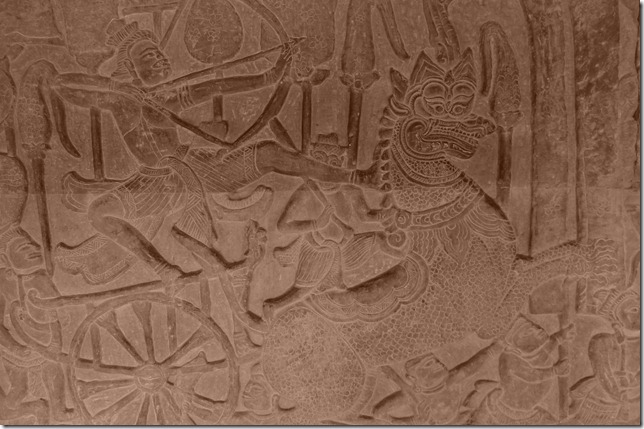 And as far as the birds are concerned… 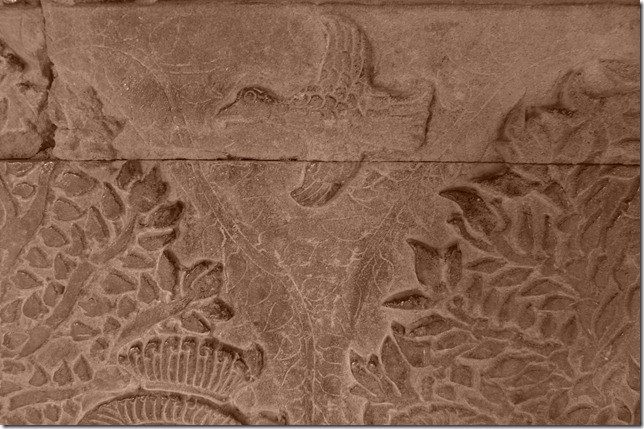 …this one remind anybody of a certain Real Tuesday Weld video we all know and love???

The Japanese tour guides have microphone-headsets; I think more for the surreality effect that any practical need. Also, the guides need to have aides to keep the Japanese in line. They’re (the tourists) always trying to light up cigarettes, or touching the murals, or god knows what else; which behaviour elicits staccato clapping from a nearby aide, who then scolds the offender back into his or her place.

It’s all pretty amusing. But most amsuing of all is they’re totally into performing these goofy-assed poses for the camera. This guy was required to, for some reason, hold his forever-and-a-day. 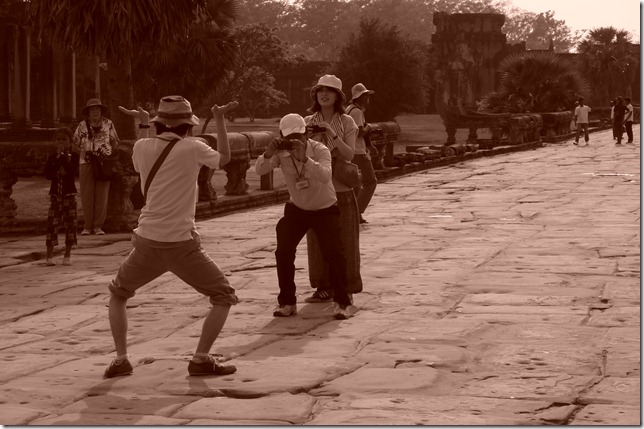 Before heading back into town, went down into the courtyard and got me a nice Reflection Photo or three. Lords save me, I’m just a sucker for those reflection shots. 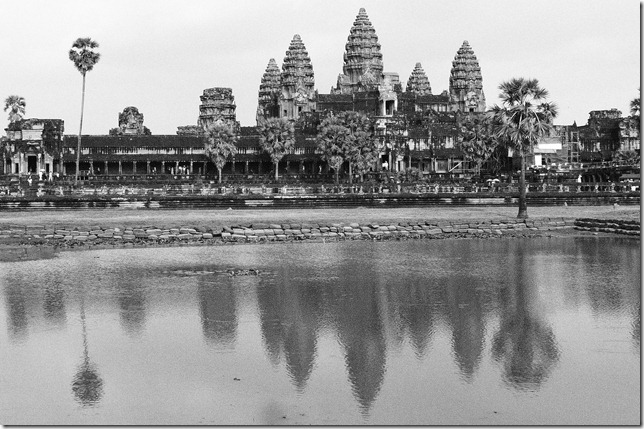