Update: Agh! Was having trouble getting images uploaded, and FTPed into the site, began messing around, and mistakenly deleted all the pics from this post! I’ve got most of them saved locally — but with different names; and it’d be very difficult to find them all again. Hopefully, you had a chance to check ’em out. Apologies for the inconvenience!

Update To The Update: Ah, found the pictures — had not emptied my recycle bin after all. Now the problem is that I’m not being able to upload pictures above some certain size; so some of them are gonna be smaller than normal. But they’re here, at least.

Temples of Angkor, y’all! The first visit was proceeding swimmingly enough. Had rented a bicycle at 6:30 in the AM, for the princely rate of $1 per day. Had biked it up to the Park, about thirty or forty minutes out of town by bike. Arrived to the first checkpoint…

…to be told that there is only one place at which one may purchase passes; about five kilometres back toward town. I couldn’t believe my ears, but eventually the nice clerk, and a recently arrived motorcycle cop, convinced me that it’s true; and showed me on the map where to go.

So that little shenanigans wasted a half-hour or so. But, soon enough, it was time to visit some temples. Angkor Wat itself isn’t ‘til the third day of my itinerary. I did steal a glance or two on my way past, heading toward Angkor Thom; but my first photo opportunity did not arrive until I passed a group of monkeys, er, well, monkeying around in the trees alongside the road. 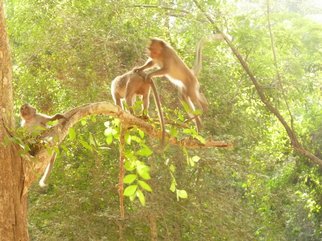 As for the temples: I’d been prepared to be disappointed. Could they really be that incredible? Well, yes they could. If anything, all the superlatives one will read in any given place undersell the electrifying nature of these structures.

You want photos, you got ‘em. But be careful what you wish for: already three hundred, after only the first day. I’ll be adding to the set as I go, natch.

I guess it’s a combination of the temples’ vintage, the craftsmanship with which they were built, and the sheer magnitude – you’re up above the trees at the top of some of them.

Best of all, though, is the incredible carvings. 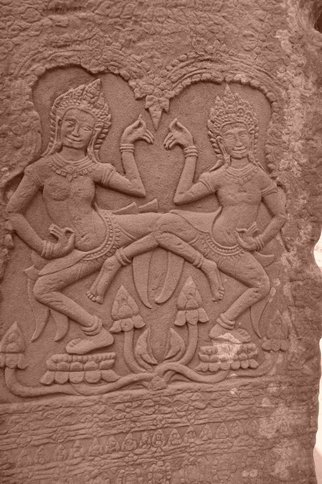 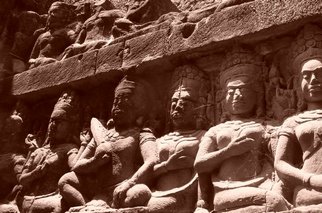 One thing that does kinda burn my britches, however, is the putting onto these ancient Buddhas of clothes. Okay, if this is how it was done in ancient times, I guess I don’t have a problem with it. But something tells me it’s not how it was done back when. 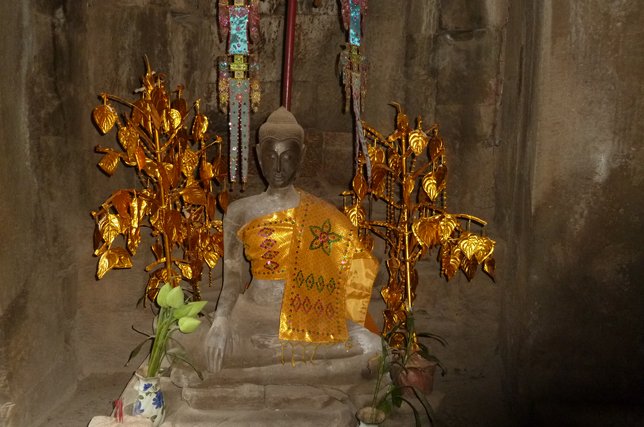 Kind of strange the way the traffic flows. One could be standing in one particular spot, waiting upon a seemingly endless line of people to clear the area and allow passage; while, fifty feet away, one could have an entire hallway all to oneself. Later in the day, I even visited an entire group of temples, set back in the woods a little bit, and saw maybe only three or four people total.

Anyhow, my favourite tellow-templer was as follows. 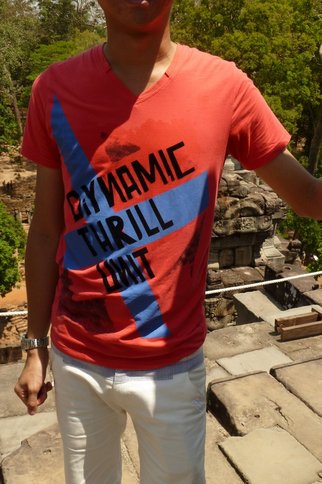 Fun, too, was the Japanese group on a tram. A lady lost a dollar bill as the tram was driving by me. As it fluttered to the ground, I got off the bike and held it aloft. The Japanesienne whose dollar bill it was began screaming for the driver to go back for it. Which instructions were followed to the letter; and all the ladies waved and thanked me profusely for having rescued from certain doom their friend’s dollar bill. 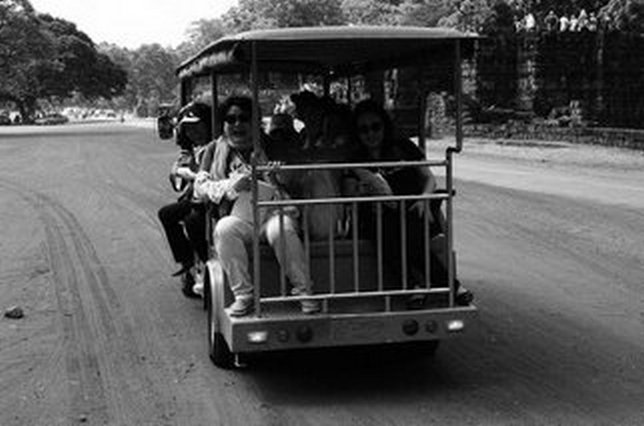 I didn’t take a noontime break, as I’d thought I might do in order to escape from the sun. In point of fact, while it was indeed hotter’n Hell; there are so many trees around and about, that shade is never too far away.

This is especially true on the roads between sites, making for idyllic bicycle conditions. Must say, I felt rather sorry for the poor schmucks haggling with their tuk-tuk drivers for more time. Get a bike for a dollar, and see what you wanna see! The layout of the area is just big enough to keep the bicycler honest, but not so big as to make the getting around feel onerous.

It was partly cloudy on this day; which not only helped to keep the temps down a tad; but also made for some nice photographic backdrops. 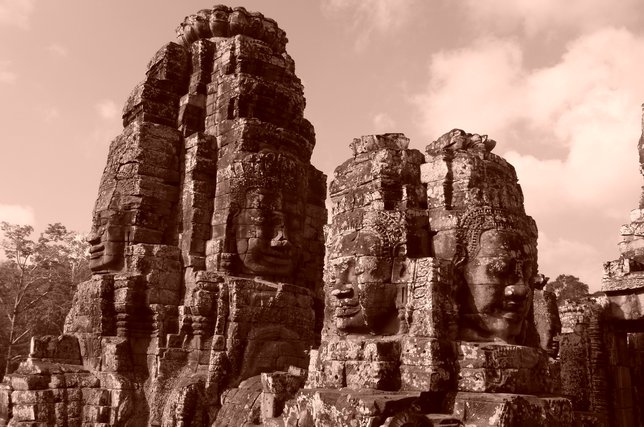 At one of the parking areas, walking back from the pisser to head toward a temple group; one of the many sellers… 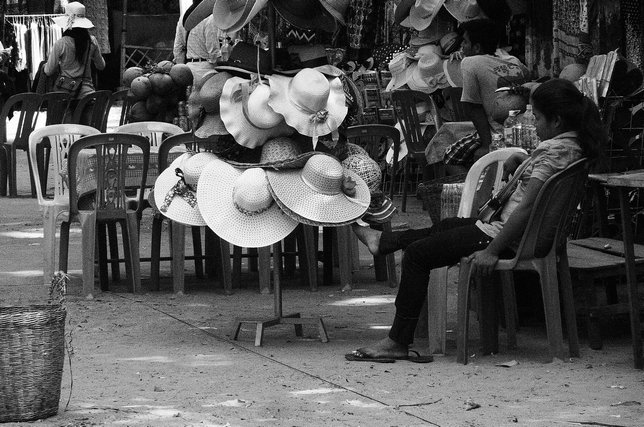 …sprang to action. “Sir, you want buy shoes? I have a new shoes!” See, these Cambodians, rather than heaping scorn or ridicule on the bare of foot, they go straight for the pocketbook.

Okay, I’m not a-gonna say that the Park’s trees are even more impressive than the temples. But…they’re pretty frickin’ great, too right. 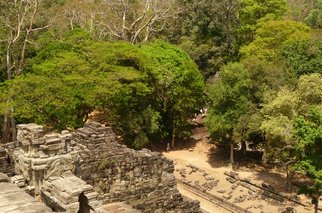 Mosquitoes began popping up in the afternoon, just as the light was at its best. 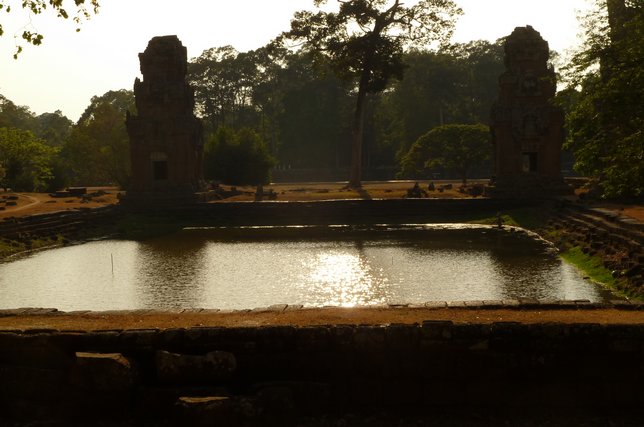 Still, I soldiered on! And perhaps my favorite venue turned out to be not a temple, but a gate – just a gate in the big wall surrounding the Angkor Thom complex. 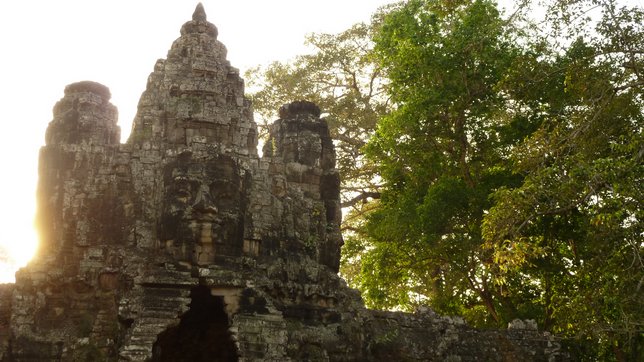 Following the proposed five-day itinerary of The Angkor Guide, I got to everything save the last two on the list for Day 1. Either I’m particularly slow of poke, or ol’ Maurice, the guide’s author, is something of a task-master.

Actually did arrive to the final two sites; but noting their size, figured I’d not have enough remaining light to visit the temples, and still get back into town before nightfall. As it turned out, the timing was almost perfect. Only the last five minutes or so did I think it too dark to be fully comfortable.

Yeah, in Vang Vieng, motorcycles drive around at night with their headlights off. Here in Siem Reap, they do the same – but also on the wrong side of the road; right on the road’s shoulder, where the bicycles are driving. Sheesh!

Now, if somebody could please explain why it was that this song was in my head all day, I’d be fascinated to know.

Can’t even begin to say how long it’s been since I’ve heard it; and all of the suddenly there I am singing it right in the middle of the damned Temples Of Angkor! Weird.

Well, that shit all went down on Tuesday, yesterday. Tomorrow, back for Day 2.

First, I’d purchased a couple of small watermelons, and had been eating them back over at that same temple with the kick-ass band. Had four eaten halves on the bench beside me; and a lady came up and grabbed one, then two of them. She looked at me, I kind of nodded my assent, and she disappeared with them around the corner. No idea what she planned to do with them.

Then, I purchased still some more to take back to the hostel; and walking down the street, a local with a big, booming voice began making all manner of cracks and comments about it. Eventually, voice still booming, he asked if I needed a tuk-tuk for the day. When I replied that I did not, he lowered his voice dramatically, and offered, “Lady massage?”

Later on, I’d purchased some sapodillas and some cucumbers, and headed down to the riverside for some juggling. I young-ish man leaped over a row of plants (standing all of about six inches tall), was unable to keep his balance, and ended up on his backside. He rolled back up, and jumped up to his feet again — almost as though he were practicing his Chaplin routines. He then began to watching me ever so intently. I tried to say Hello, but he wouldn’t have of it.

Some tuk-tuk drivers came over as well, and they would say Hello to me. But they soon grew uninterested, and it was just myself and the failed plant-leaper. Finally, the son of a bitch walked over to my bag of sapodillas, and grabbed one up. “Hey! Hey! Hey!” I protested. He held eye contact for a couple of seconds – looking quite maniacal, I must say – and then walked briskly off.

What, I’m gonna chase him down over a freakin’ sapodilla? But I did wonder aloud, “What the…?” and looking around. One of the tuk-tuk drivers, having witnessed the scene, was shaking his head. Nothing left for me to do but chuckle, and go on back to the juggling.