Okay, let us begin with a link – to the best news story of the year; maybe the decade or even ever.

Law enforcement officials across the country are puzzled over a crime wave targeting an unlikely item: Tide laundry detergent.

Theft of Tide detergent has become so rampant that authorities from New York to Oregon are keeping tabs on the soap spree, and some cities are setting up special task forces to stop it. And retailers like CVS are taking special security precautions to lock down the liquid.

Go read the piece in its entirety. You will be loving your life!

Now then, a few more words about the ride from Poipet to Siem Reap. First, baskets: 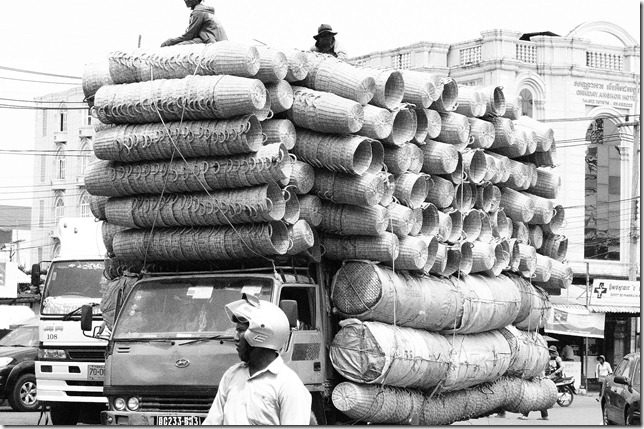 Second, that I done neglected to relate a pretty funny story told by the American. The Germans, like myself, had taken the train from Bangkok; the American the bus. He’d been staying close to the terminal, so it’d been a convenient option.

I asked him how the bus ride had been, and he told that they’d stopped for a shitter break, and he’d taken fifteen minutes or so puking out some kind o’ somethin’ he’d eaten in Bangkok the night before.

After which, he’d found that the bus’d gone and left without him. He’d then asked the clerk at the restaurant at which they’d stopped what was the deal?, and the clerk’d called up the bus driver (the American knew not how the clerk’d obtained the driver’s number). The bus’d then pulled over to the side of the road, and a guy had ferried the American to the bus via motor-car.

I asked if everybody had clapped when he’d returned to the bus; but he said that nobody had seemed to even notice his absence; but they’d all given him a strange look when he’d got on – apparently never having seen that particular bus pull that particular manoeuvre before then.

Friday night, after checking in, I wandered  over to the Market to grab some food. Here we go, two blokes playing some Takraw, but with an elongated shuttlecock instead.

Saturday set out to explore the town a bit. Pretty nice  place, though…too much traffic. What can one  say? It’s apparently inescapable.

A guy with a fucked-up squeak for a voice stopped me ‘cause he was astonished by my bare feet. But soon, he began asking other types of questions. Turns out, his son is in Miami, and is a General with the Marines.

I asked him why the Hell he’d allow his son to join the U.S. Marines, given that we’d bombed the ever-loving shit out of his country. “My son, not me!” he protested. But why had he allowed it?, I pressed. Said he hadn’t had a say in the matter, but was surely not happy about it.

When he received a phone call, he abruptly broke off the conversation, and departed the scene.

Walking through some or other Market, a flip-flops vendor asked me, “Sir, you need buy shoes?” Couldn’t help but chuckle.

A shop called “Rogue” will transfer albums to your device or hard drive for $1 each (50 free if you buy 100). Check out their top ten list. 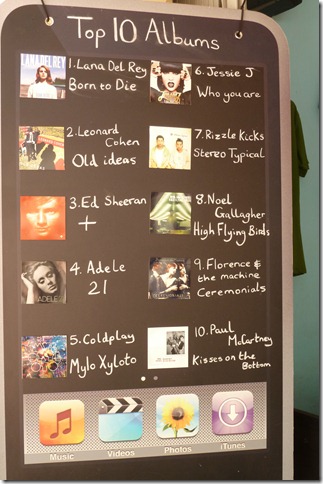 Which, first off, if somebody’d asked me, “What  do you think is the No. 2 album in the Siem Reap piracy shop?” I’d never in a million years have guessed, “New Leonard Cohen.” Even had I known of its existence, I should not have guessed it.

Brings us to the second point: how come nobody ever warned me that there’s a new Leonard Cohen rekkid? You people know I’m traveling, and out of the loop and all. Give a brother some heads-up next time, willya?

Was doing some juggling down by the river, which doing was being keenly enjoyed by a young boy, and a not-young man. Asked the boy if he’d like to give it a try, but he declined. The man, name of “Tawan”, fumbled his way through it for a bit; but was more interested in chatting me up.

Said his cousin is going to be going to University in the States, and wanted to know if I could talk to him and give him some advice? Sure, why not? So he was going to go to the hospital for something, then get his cousin, and meet me back there at 2:00 in the PM.

He asked at which hostel I’m staying, and how much I’m paying, and my e-mail address. Said he needed to know this, in case I didn’t show up. I promised him I’d be there; that, in fact, I was going to sit and eat some food, and wouldn’t even be leaving in between.

He showed up around 1:30, sans cousin, but with tuk-tuk driver, asking if I were ready to go? Go where, I’m not going anywhere, I assured him. He quickly made for the  exit, and I demanded, “What is this, some kind of game?”

“No, no games. Neighbour…” and with that, he vanished, never to be seen again. What was his scam? Don’t know. Maybe to drive me to a different guest house, and convince me to stay there instead?

In any event, I guess I’m pretty naïve, as scammers always seem like such nice folk! Didn’t really suspect he was scamming until he asked for my e-mail address. Asking the lodging price might seem kinda weird, too. But, factually, it’s rather common for locals to ask where one’d purchased his huge armload of fruit, and how much’d been paid for it; and to then let one know whether one’d received a good deal. So I’m kinda used to this type of question.

Later, heard some more awesome music in the air. Whether live or recorded, I couldn’t establish. But hoping for the former, took it on the hoof to find the sound, which path led me over the river, onto a dirt road and into a village area. When I finally found it, it was now speaking rather than music. State propaganda, I assumed.

But it looked like there might be a temple behind the wall, so went to see. Temple indeed it was. 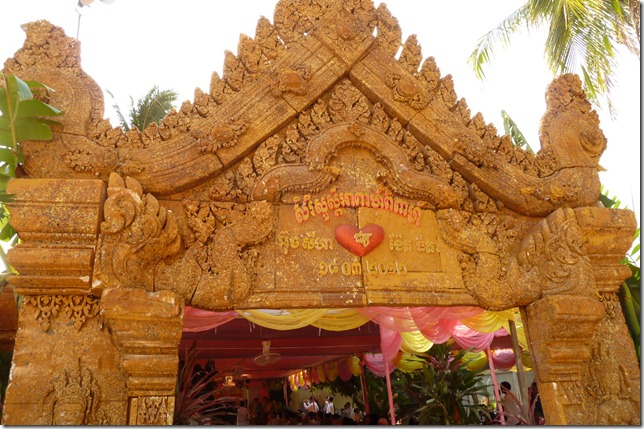 Lo and behold: transmitting not state propaganda; but rather, a wedding.

Bridal party looks like it never escaped the ‘60s. 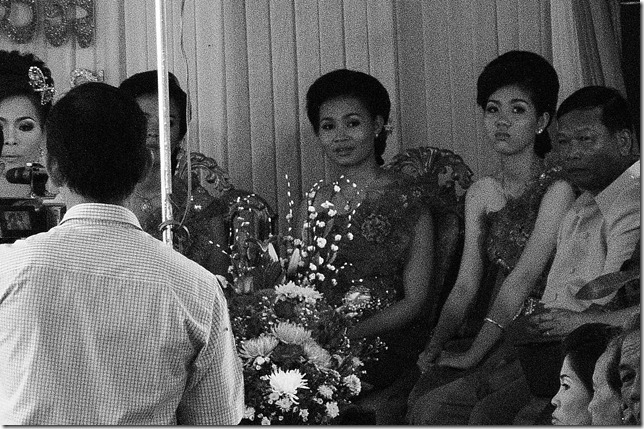 The happy couple were exchanging vows, or something.

But then they began to sing to each other. Not that they’re any good at it; and not that the sound tech had properly set the mic levels. But the music is top.

I think that’s maybe the father of the Groom, looking so handsome. But  check the guy intruding into the frame in the foreground. I could never even dream of staging something like that! But keep on clicking the shutter, and you’re bound to get such happy accidents falling your way. 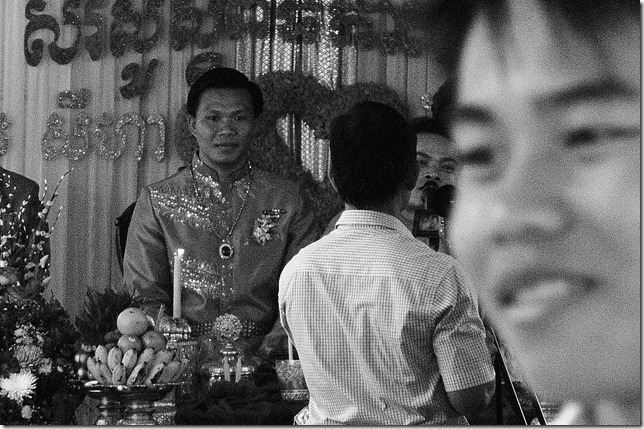 As is the case throughout the region, the trees here are marvelous. 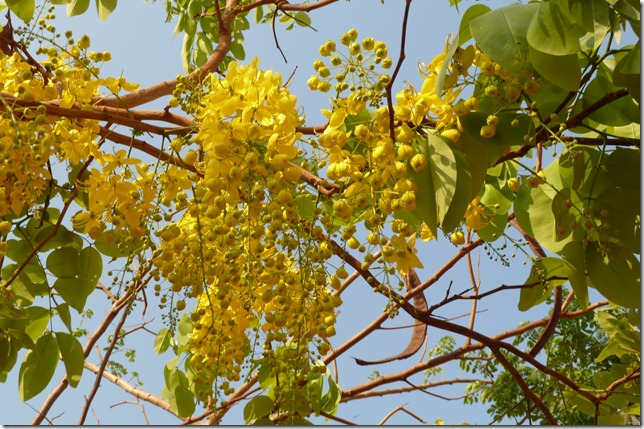 Sunday, yesterday, visited some temples. No, not those temples. Just some modern, Buddhist temple action. But they’re quite remarkable in their own right.

The town’s main temple has a cool story behind it. 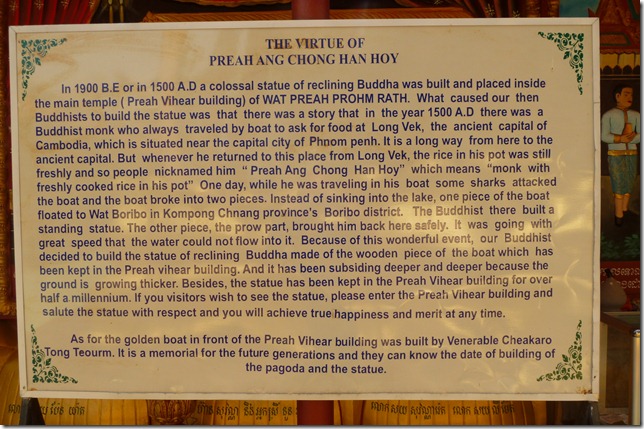 And its murals are outstandingly beautiful – including which, there’s some dioramaism going on, which makes for an interesting composition or three. 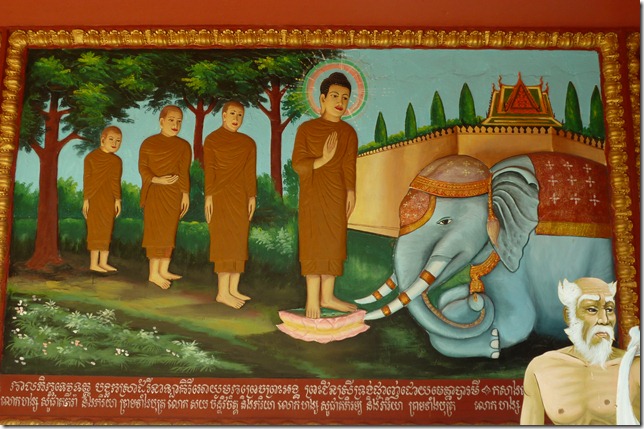 Here you go, true happiness and merit at any time. 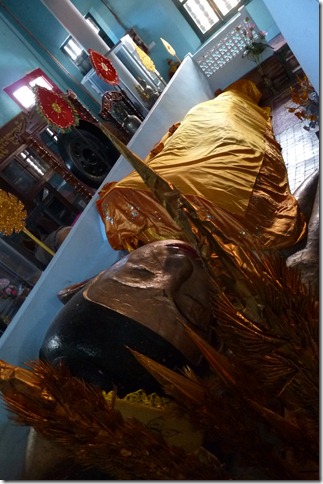 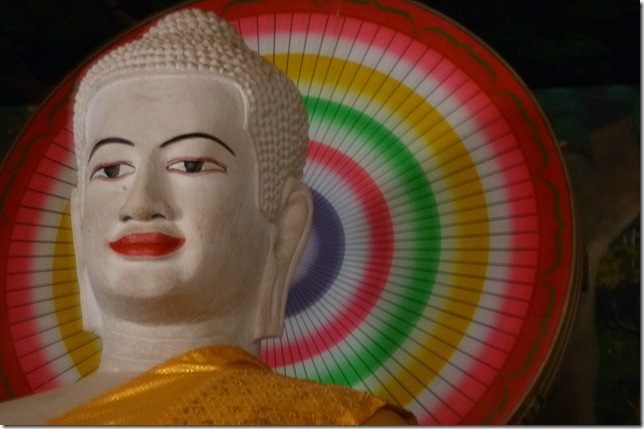 Fantastic murals here as well; including on the undersides of the roof overhang. 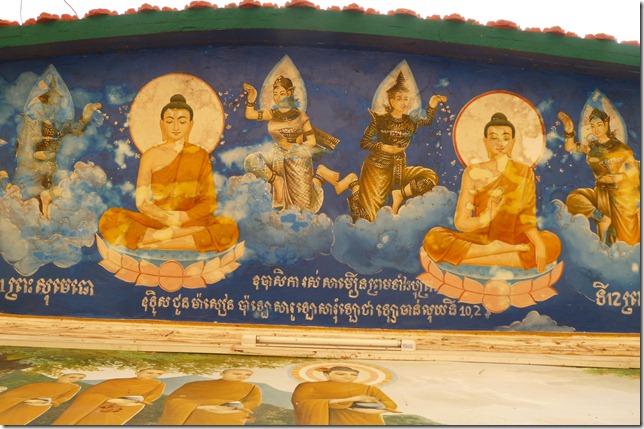 Moving down to Wat Bo, a shitload of stupae on the grounds. 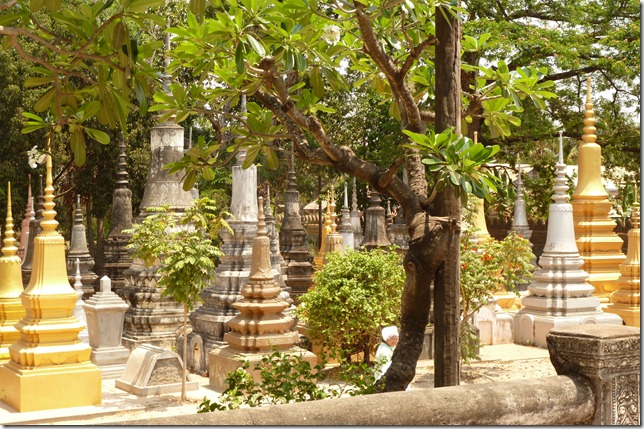 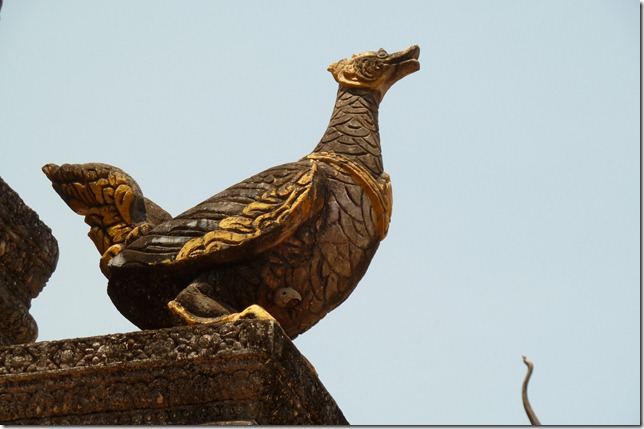 What do you make of this strange little shrine? I think it’s kinda freaky! 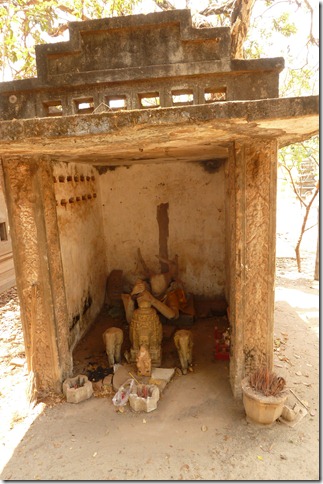 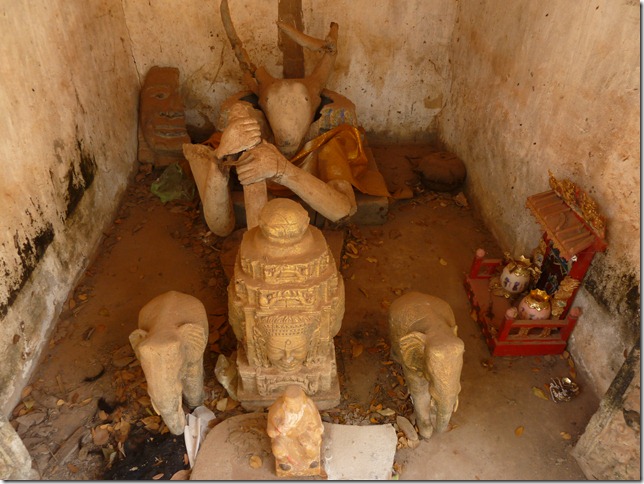 I guess I’d missed some kind of huge wing-ding from earlier in the day. In one quadrant of the grounds, they were just stacking up the chairs, and cleaning the area around and abouts. And a Japanesian told me that there’d been at 7:00 in the AM a huge bonfire in this fire-pit structure. A climb up and look down in revealed the heat still emanating. 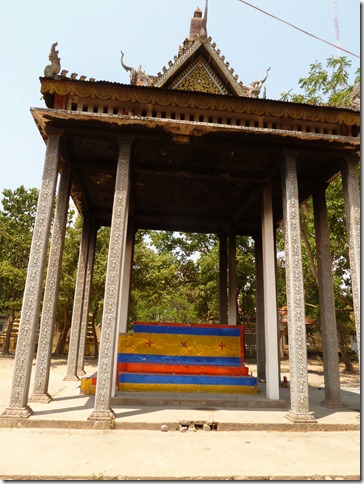 The last temple was kind of boring; although it did have some beautiful animal carvings on the window shutters. 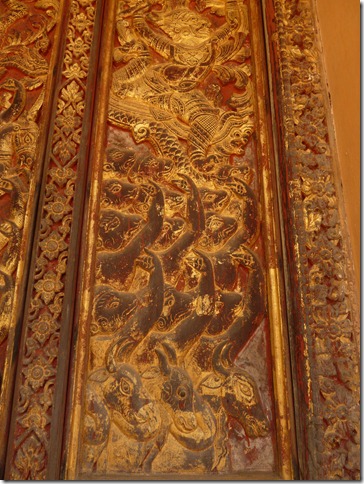 The hostel has a rooftop gym – but it’s also great for just checking out the scene below. 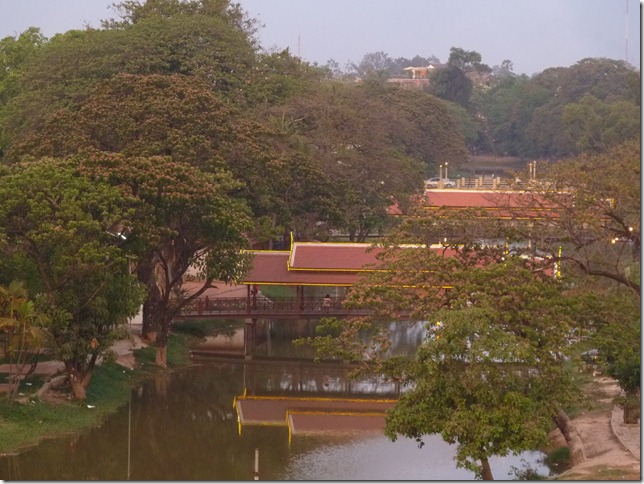 To-day, Monday, was supposed to be for boning up on the Temples Of Angkor, in preparation for tomorrow’s first visit. Still need to get busy with that.

But, come on, how righteous are these cats? As righteous as it gets, I’ll wager.

There’re tonnes of these “fish massage” joints in town. You stick your tired feet in the tanks, and I guess they nibble at them, giving a massage effect? Or something? 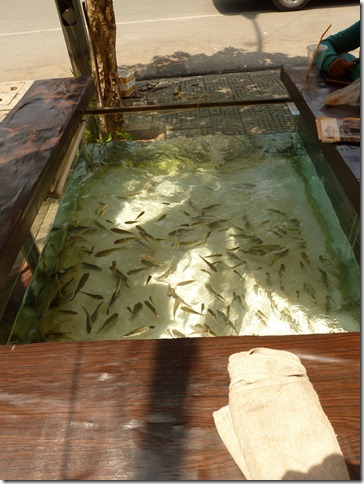