Arrived via bus to Udaipur, the Lake City, in late afternoon, immediately hoofed it to the Railway Station to secure a passage to Mumbai, and then made the hour-long walk to my guest house. By the time I’d finished checking in and made my way up to the rooftop, it was late enough now in the day that this was my very first view of Udaipur’s famed waters. 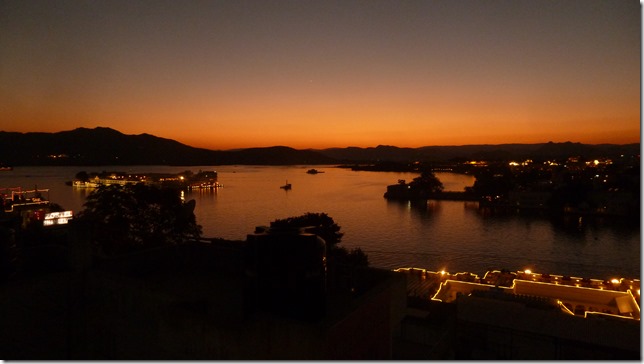 It’s great to read about a place, but not look at any pictures, ‘cause then when you do at last get a glimpse, it can still be surprising enough to draw a gasp. There’re a half-dozen man-made lakes around and about — constructed from the sixteenth to the nineteenth centuries — with massive, gorgeous palaces (many now converted to hotels) ringing the shores and, as you see, occupying small islands as well. It also looks mighty fine during the daytime. (Moreover, we’re already in the Element Of Summer here despite it’s only mid- January: Nary a cloud in the sky, daytime highs in the 80s; though still quite chilly at night.) 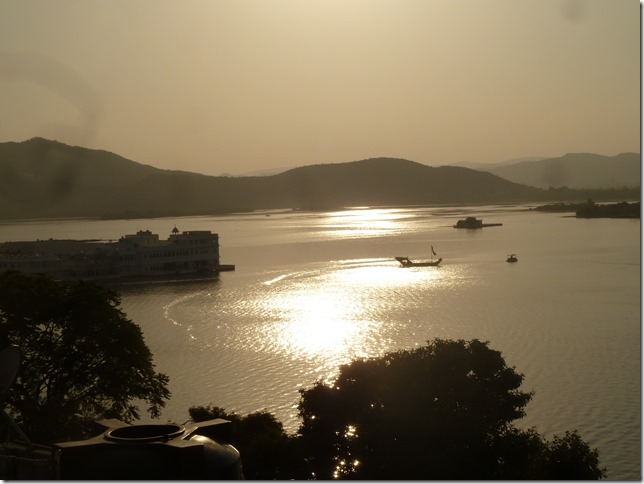 Octopussy was shot here (and parts of Gandhi as well), and it’s certainly easy to see why such a location should have been chosen. It was one of my fave Bond films back in the day, but when it was released to DVD in the early-oughts, my estimation was that it had not held up well at all. Now, having visited Udaipur, I shall have to give it another look-see. 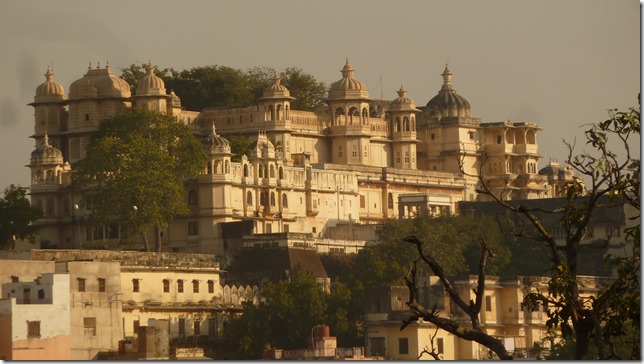 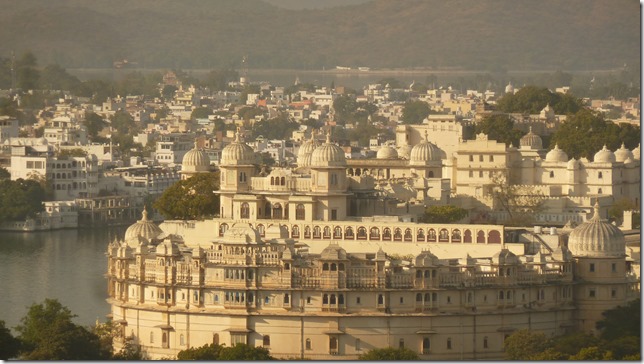 The tour of the same is a great wondrous time, including another heaping helping dose of those stunning Indian Miniature paintings to go along with the marvelous architecture and the most beautiful décor I’ve yet seen in any such tour. Lucky you, however, I didn’t purchased a camera permit, so I have no pictures of the interiors to pass along.

There is this, though. Leaving the Palace grounds, some dudes barraged my self with the usual litany of questions – What is your name?, What is your country?, Are you traveling alone?, How long have you been in India?, and cetera – and then asked me to sit for a photo with not only themselves, but also their students. The latter were massed just outside the gate – you couldn’t possibly believe the enormous numbers of field-tripping schoolchildren rushing through the museums in India and Nepal. It’s kind of annoying, truth be told, considering it’s like waiting for the world’s longest train to pass, and yet they don’t even both to look at the exhibits.

Anyway, don’t generally bother to do so on these occasions, but as many cameras were already being passed around for the event, I added mine to the mix. I don’t even think the smiling ladies next to me were a part of the group – they showed up and joined in after some photos had already been taken. Don’t know why having one’s photo taken with a frickin’ barefoot gora apparently carries with it such cache, but it’s a great favourite pastime of the Indian citizenry. The kids seemed more confused than excited; but when I made to shake their hands after, they were happy to get into the spirit pretty good. 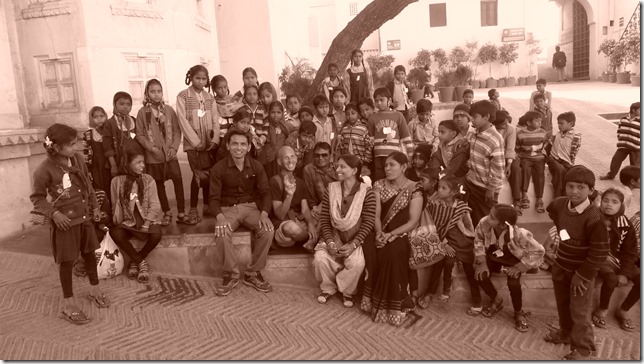 One can hike (or get a gondola) up to the top of one of the hills to view the sunset, and pray the temple, and so forth. And from the one angle… 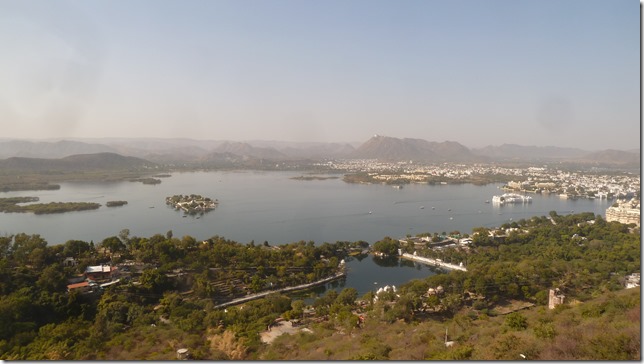 …one might well be forgiven for wondering, “That’s not such a big city – from whence all the smog?” But, turn around and look down the other side of the hill, and Udaipur is reminiscent of Kathmandu: Ringed by mountains, with urban sprawl jamming its way into every square inch of the valley floor below said mountains. (To be fair, there’s a lot more green space set aside here than in Kathmandu – but the smog is nevertheless just as noticeable in the former location as in the latter.) 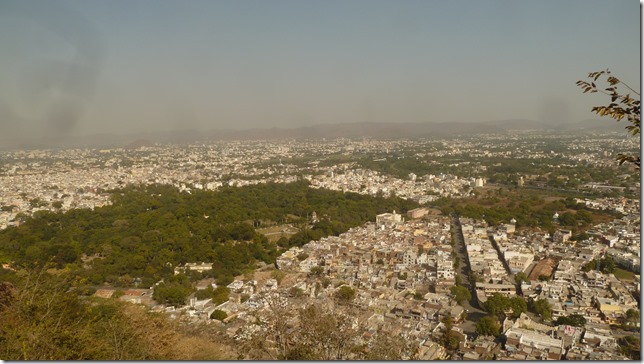 Also to be seen from the mountain-top, this incongruity set amidst one of the local neighbourhoods. One wonders, might it be a landing disc for a Martian craft? It would help explain how the sons of bitches living here some six hundred years before present pulled off the magnificent engineering marvels that are the lakes and palaces. 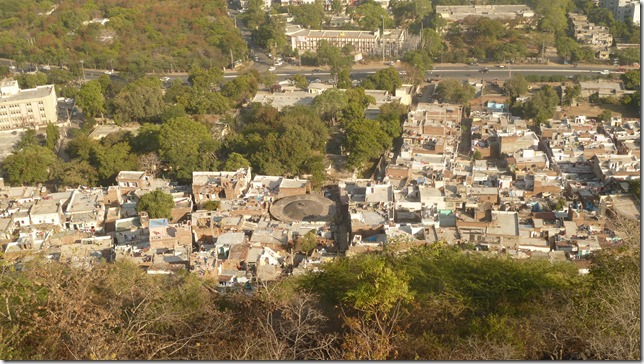 In addition to the smog, the city’s other bugaboo is the obligatory motorcycle and tuk-tuk gauntlet. But, Udaipur being a hilly city, the damnable machines are, unlike in other cities in India and Nepal, truly terrifying here, careering down the steep inclines through the very narrow streets at even faster rates of speed than elsewhere they could. So I’m more than a little thrilled to (knock wood) be getting out of here with my bones still intact.

Nastinesses aside, there’s much to love here, beginning with the public art. There are any number of art schools in town, and the students use the walls for their final projects (or what). The subject matter is pretty samey, but it’s great fun to be walking ‘round a city whose buildings’ walls are filled up with such-like images… 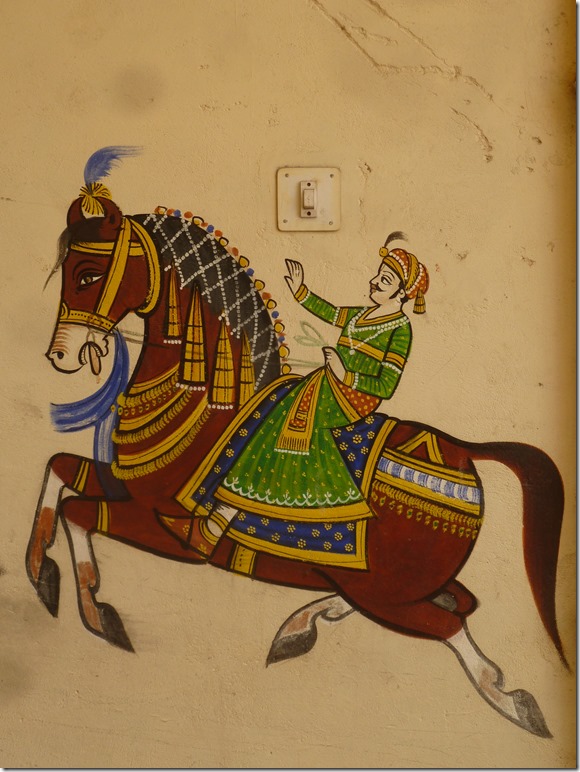 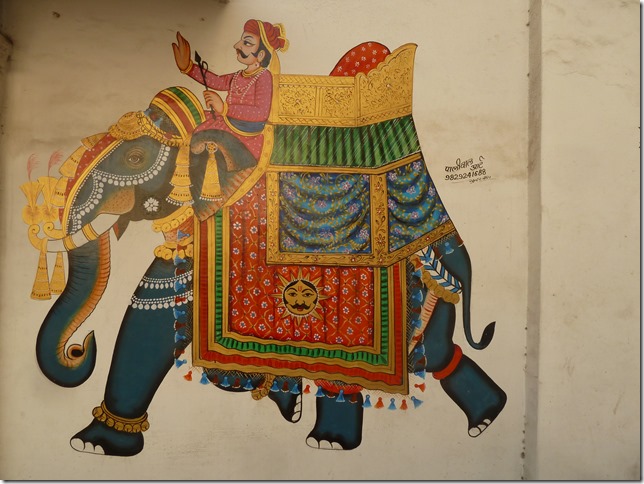 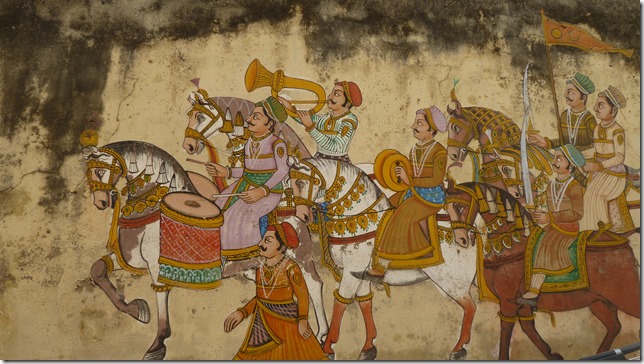 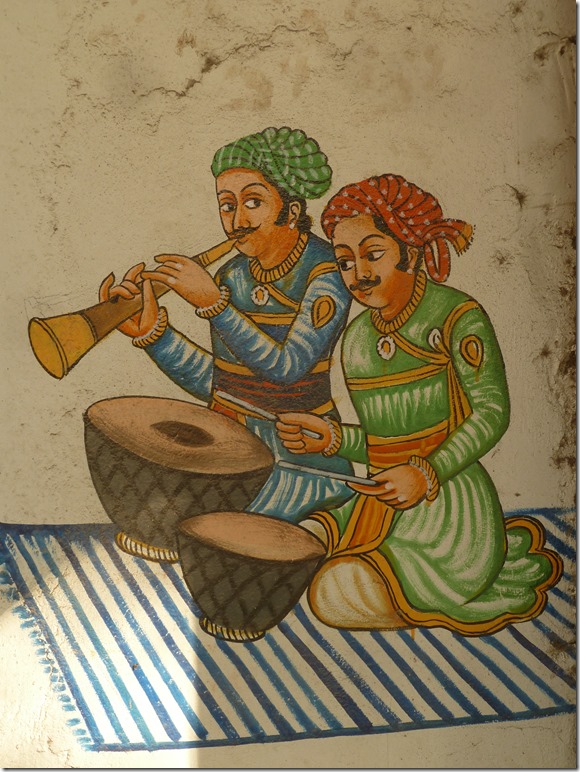 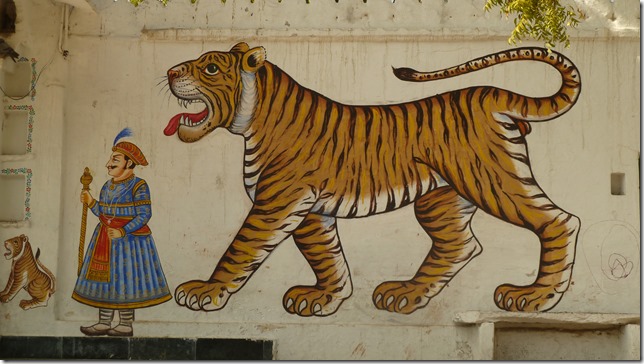 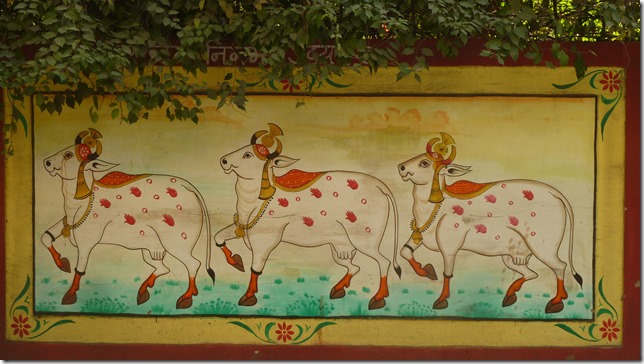 And there are shit-tonnes of temples here, some of them very impressive (not to mention freaky/strange) indeed… 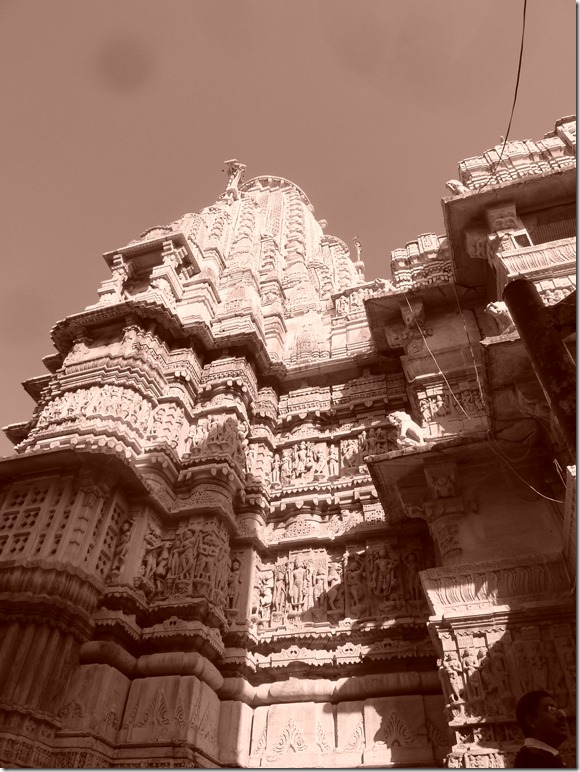 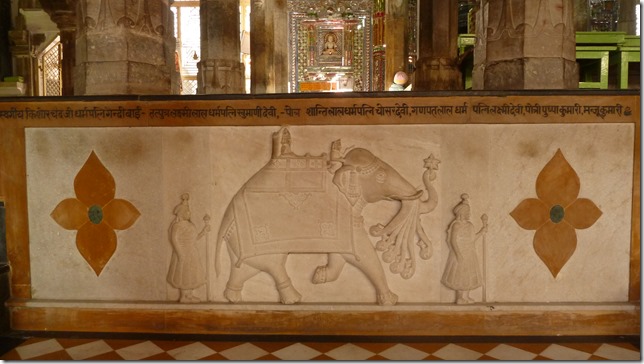 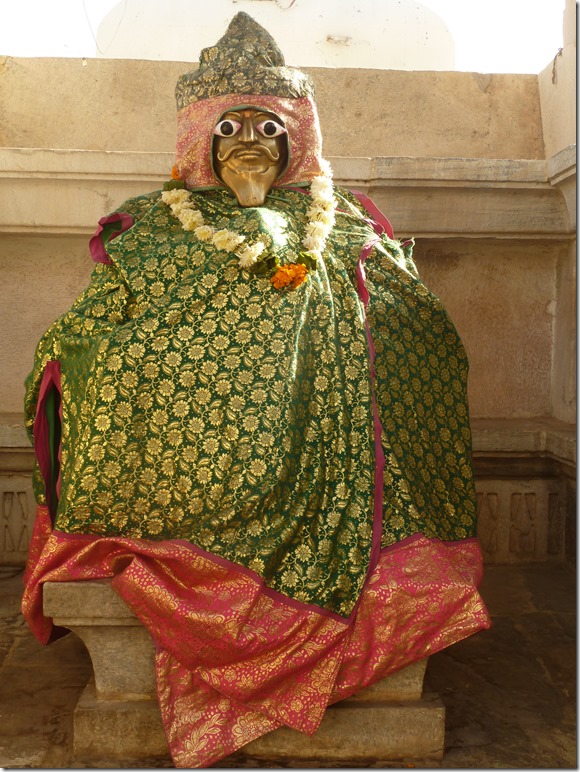 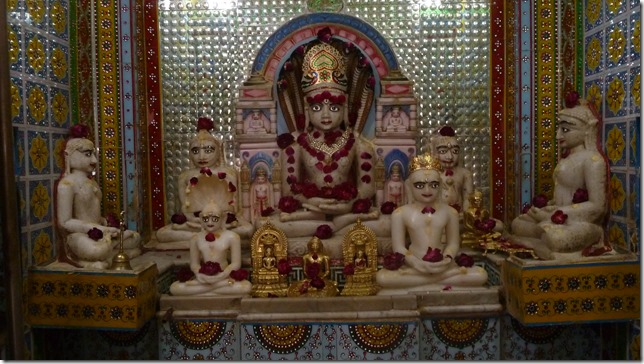 But even the smallest little one-cow hole-in-the-wall has got its own evening Puja. This one here, even despite its rather shaky attendance figures, kinda thrown me for a loop with that hypnotic drumbeat. Okay, it’s not as moving as Varanasi’s Ganga Aarti ceremony, but it’s got its own power and pull nevertheless.

Speaking of cows, didja ever see one with such wacked-out horns as this’n? Too fugging cool! Also cool: Shade-wearing mannequin guy. You almost expect him to hop onto yon motorcycle and roar off into the distance. 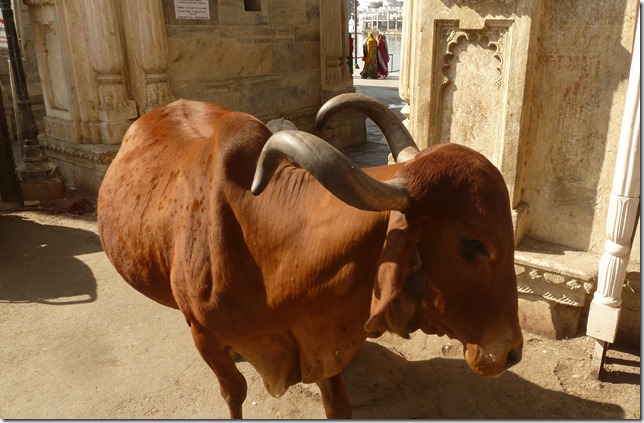 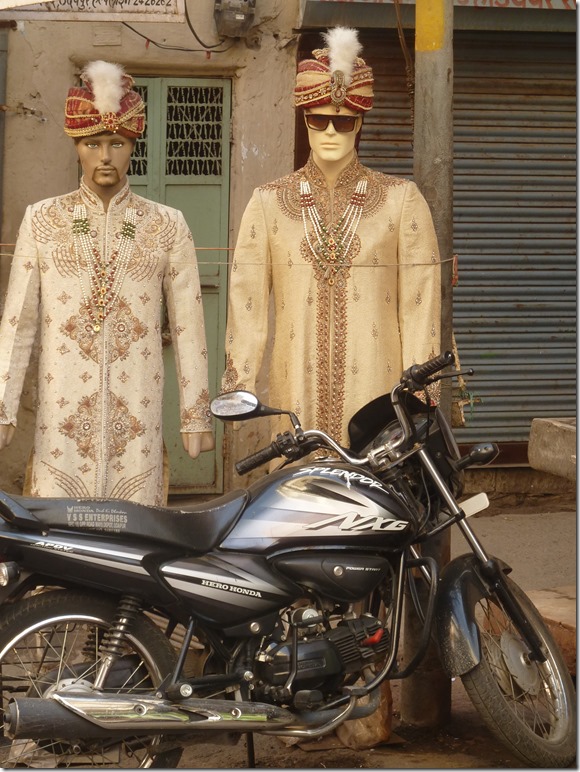 One of the great joys of travel is that every place one visits seems to have its own little idiosyncratic customs that won’t be found in any other locale. Here in Udaipur, one such is these small teams of miniature donkeys being driven throughout the city by scowl-faced stick-wielding ladies (and never fear, they’re not shy when it comes to keeping the animals in line). 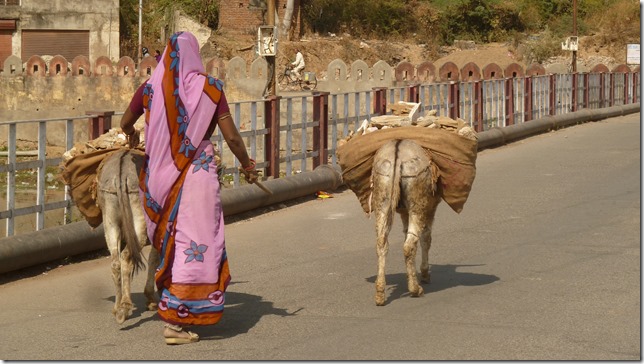 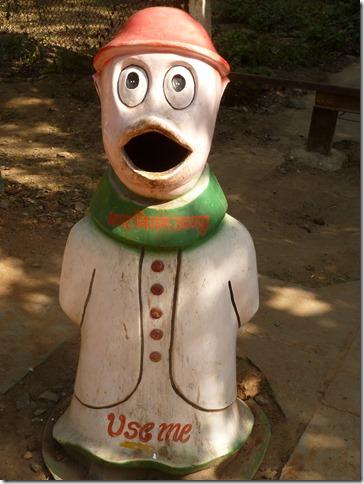 Also unique to Udaipur (at least in my experience) are these huge basin-shaped blocks of brown sugar which are on offer in a surprising percentage of the bazaars’ stalls. 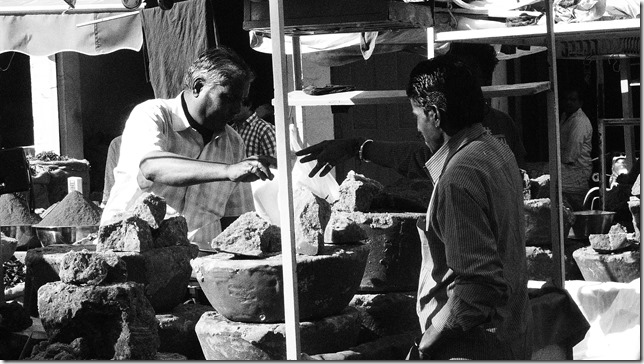 It’s not all sweetness and light with the city’s vendors, however. A few evenings back, I was out doing a little bit of dinner-time shoppings. Having purchased some Bananas from one stall, I proceeded down the hill and around the bend toward the Clock Tower area, hoping to locate some more (they don’t hang the Bananas here, so it can be difficult to find ripe ones which aren’t bruised). I checked the stock of this one big, huge, fat lady, but didn’t see anything I liked, so made to walk on down the road a piece.

Before I knew what was happening, though, the lady had reverted to Beast Mode and set upon me with a great and furious outpouring of Hindi invective – thinking, apparently, that I’d pilfered the Bananas from her place of business. She was really steaming, too, shoving me into a motorcycle, and giving me a fucking (ironic/appropriate) Indian Burn no less. I mean, when was the last time somebody gave you a fucking Indian Burn – fourth grade, or some shit?

It was right at the busiest time of day, so a big throng of onlookers gathered to watch and, eventually, pull us apart. I just kept asking for anybody who spoke English to let me explain myself, but nobody really did. So I repeatedly motioned for the fat lady to come with me back up the road, so I could prove to her the provenance of my fruit. Finally, I was able to relate to one of the bystanders that I’d already purchased said fruit, and he told me to proceed with my day – the berserk shopkeep screaming bloody murder at me all the while.

When I arrived back up to the very friendly sellers from whom I’d purchased the now infamous bunch, there was a guy on a motorcycle, checking out my story with them. They proved a worthy alibi, opining to me many times over that she was/is a “crazy lady”. I could kind of see her side of the story, to be honest: Being that it’s utterly inconceivable for any human person of Asian origin that a motherfucker would purchase any-sized portion of any thing without swaddling it in twenty hundred plastic bags, it must have seemed to her beyond the realms of possibility that I had in fact already paid down my cash-money for the fruit.

I’m proud of myself, too: Whereas those monkeys back Lumbini were able to abscond with my Bananas after only about thirty seconds’ worth of keep-away, the crazy lady only managed, throughout the entire dust-up, to get two of them away from me – which two she was subsequently convinced to return. Suffice to say, however, I’ve not gone near the Clock Tower again! (But I’m still never going to start using plastic bags, no matter how insane the people think me. In fact, being in Asia has made me despise plastic/disposable packaging even so much the more than I already had done.)

Now then, speaking of monkeys, here we go for poops and giggles, some more business from the same. This was coming down the side of the mountain the other day (I’ve gone up there every day I’ve been here — more for the exercise than for the view).

I sat down to watch for what I expected would be just a few minutes, and ended up spending almost an hour’s time, just enjoying the goofiness of the youth and the serenity of the elders. So fascinating to me! 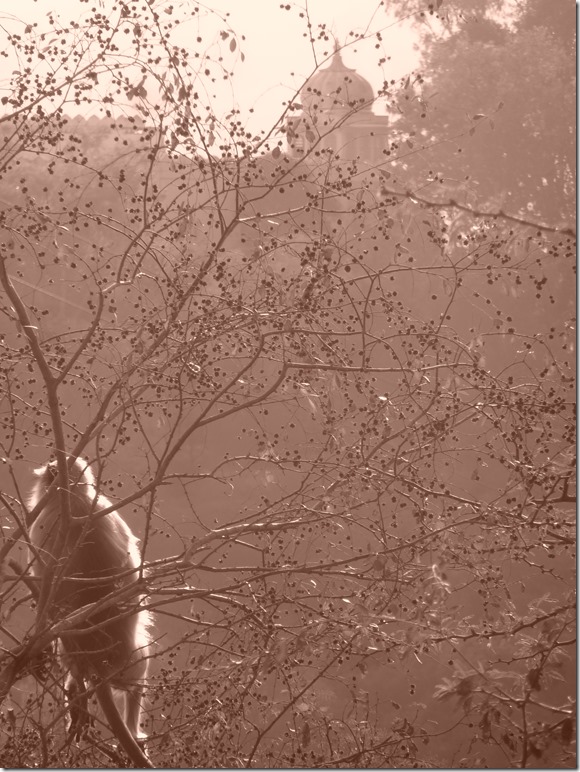