Maybe the signal reality of the tropics is that all of the senses are more less always engaged. Not always in a good way, of course – but when you’re here, you sure do know that you’re alive.

One moment, say, the sun would be blistering your dimpled ass with such unrelenting fury that it would be all you could do to cower in fear, praying for a swift demise – while ten minutes later, the clouds would have rolled in… 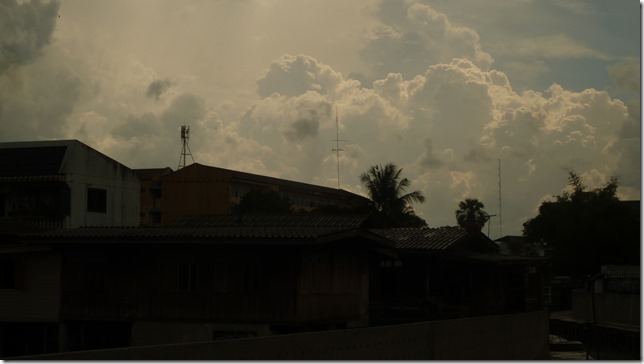 …and it would be raining so fugging hard you’d swear the entirety of the Asian landmass were about to up and float away. Not much after, you’d be witnessing a sunset of just about unparallelable beauty. 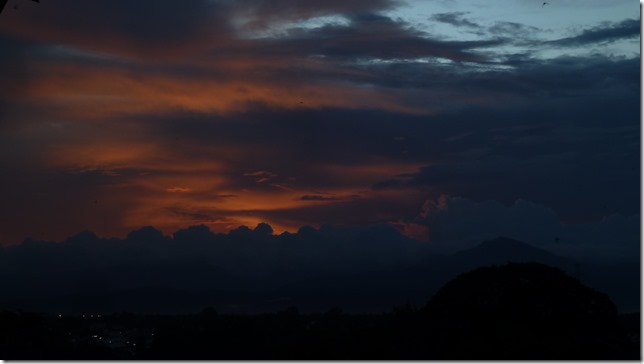 Or, one minute you’re walking past a garbage heap as high as the Empire State and with a stench so foul it could be bottled and sold as perfume to Lucifer hisself – but just a few jots later, you’re astride an impossibly gorgeous landscape instead… 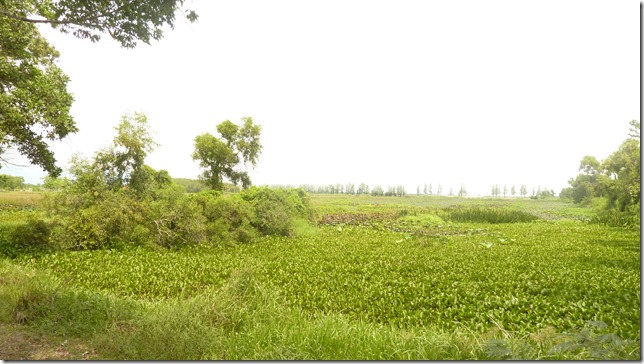 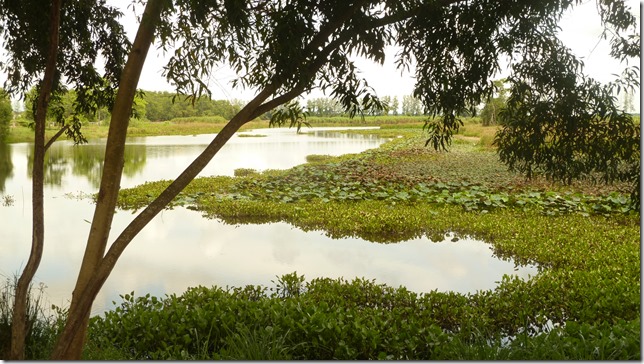 …and as a sawngthaew rattles past, a wild-haired, gap-toothed passenger with a smile as wide as the Golden Gate leans out the window and screams, “Whad you name??” (Just what in god’s holy word a sawngthaew – the only vehicle encountered for a good half-hour’s time – should be doing patrolling such an off-the-beaten, backwoods, road as this still needs working out…)

The endless onslaught of yet another Thai festival’s offerings of deep-fried eats, plastic doo-dads, and patio furniture is redeemed by the lovely, mild-mannered monotone lilting out of a raised-up bullhorn. Apparently reading off the news – to judge by a reference to Koh Tao, site of the recent murders of two British tourists – the occasional chuckle or guffaw are the only indication of the narrator’s investment in the day’s events. Though it’s being completely ignored by the festival throngs, you latch onto his voice like a beacon in the night, wishing the moment could last forever.

A scant hundred or so yards away from the cacaphony, one encounters a serene splendor.

The only farang in town, you stride barefoot up the boulevard munching a crown of Broccoli – and not five minutes after find yourself  striding right back down the very same boulevard, nursing a pair of Coconuts and wondering whether the locals think you’ve just dropped in from Planet Moon – or else from some place even further afield. (But also not caring: the Coconuts here in the south of Thailand are so delicious, and so inexpensively priced, that I am now become a two-fisted drinker of their magnificent abundance, and have found myself wondering whether it’s possible to survive on Coconut-water alone.)

One second, a group of temple dogs refuses to shut up its annoying-as barking no matter how colourful and/or profane your threats to do their dirty asses in – the next, about eleventy billion birds have, in rousing fashion, taken up their evening chorus.

You’re drawn to visit an otherwise deserted temple by the enchanting musical selection overloading its loudspeakers, through which it can be heard all the way out the road. The Buddha is nothin’ special, but a black cat sits in front of said Buddha, cleaning itself. Taking in the scene, you find yourself madly in love with Thailand all over again.

The music is the key element – as is the case with a morning ceremony in the middle of a temple grounds so arborous it feels like already the middle of the jungle, even though only two minutes’ walk from the highway. Outside the hall, a lady skillfully readies Coconuts for the drinking while her broadly smiling mother motions for you to enter and join in the ceremony.

A delightfully inscrutable sign stops you dead in your tracks. Who even needs to learn what it means? 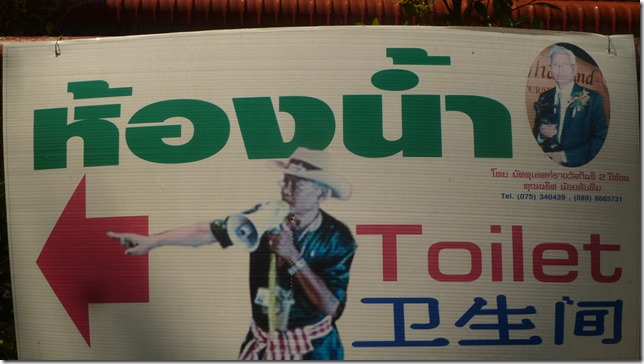 Also (and don’t you just hate it when that happens?): 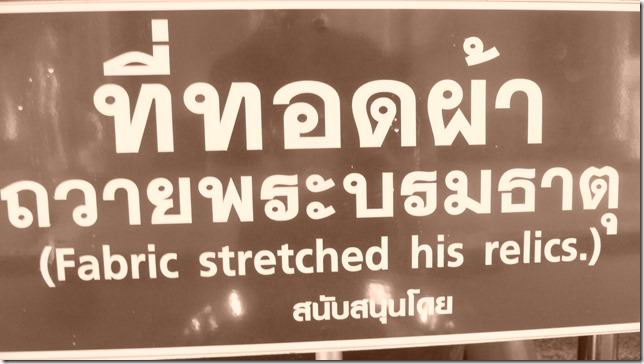 Just a few snippets from life in Nakhon Si Thammarat, the administrative centre of southern Thailand during the reigns of the kingdoms of yore. They call it the Land Of Smiles, and nowhere is it more true than here – the locals’ smiles seeming even more genuine, and more readily forthcoming, than anywhere else. Moreover, every single schoolchild will and must call “Hello!” to you when passing (or, presumably, perish on the spot). There really isn’t so much to do here – yet, somehow, I’m not even close to wanting to leave. Thailand, you done it to me again.

I may not be the most reliable of narrators, however. Consider, for example, that the mere sight of some kids using a mop-handle and a burlap sack to zamboni the local five-a-side soccer pitch just about makes me want to swoon. 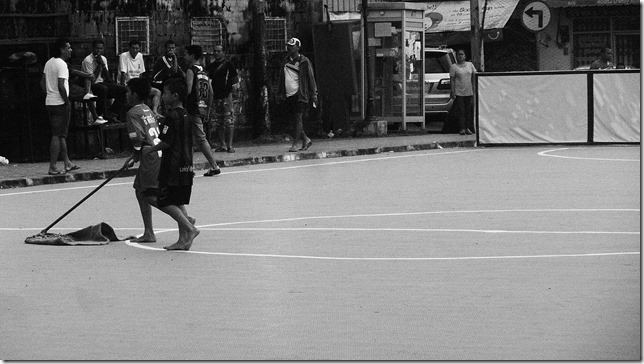 The big draw here is the 1,200-year-old Chedi located on the grounds of Wat Phra Maha That Woramaha Wihan (try saying that nine hundred times fast). 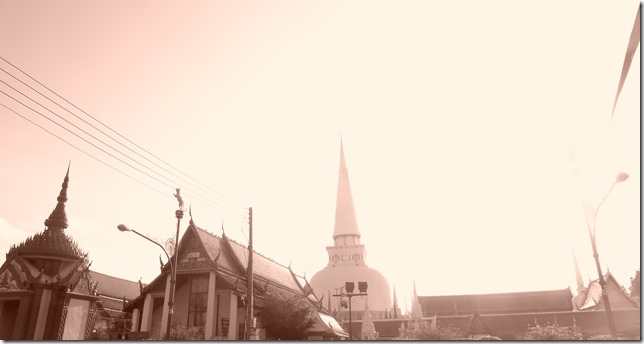 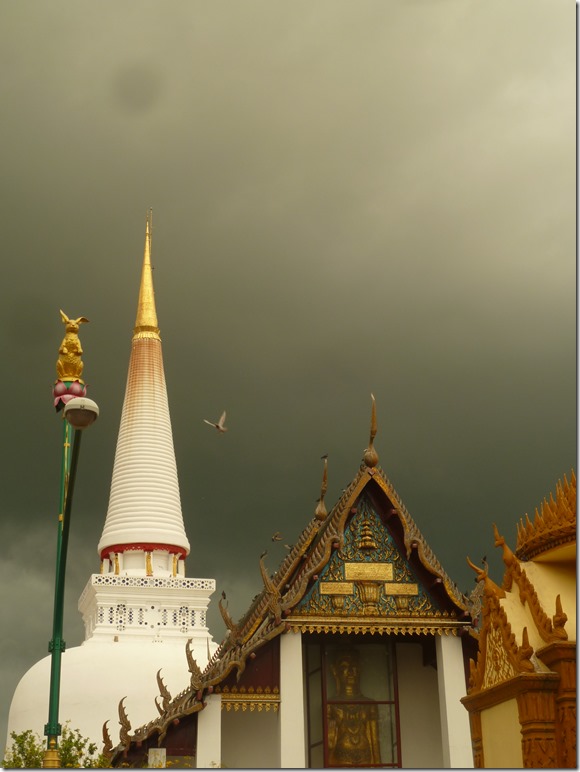 The Thai tourists arrive by the scores, reverently circumambulating its massive girth, making some banal offerings, and then leaving off. I guarantee you that they’re idiots, however, as they – to the very last of  them – leave the attached museum completely un-visited. They oughta be made to know what they’re missing, because this museum (not to be confused with the nearby instantiation of the National Museum, which is l-a-m-e lame) houses the finest repository of Buddhist imagery I’ve ever seen. So great, in fact, that I can’t even really think of one that I could  consider to be a distant second.

As I made to enter, the attendant barked out, “You!” I turned around, thinking she was going to charge me admission, even despite the sign promising, “Free To Enter Museum”. “No photo!” she perfunctorily chopped instead.

“Okay!” I merrily replied, relieved at not having to pony up. A few minutes later, surveying the hundreds upon hundreds of Buddha images – ranging in height from a few inches up to twenty-five feet or so, most of them at least a few hundred years old and carved out of bronze, limestone, or wood – haphazardly arrayed in front of me, it was all I could do to resist offering 1,000 Baht if only they’d let me take pictures of them all. (Reason I didn’t is that I figured they’d take the 1,000 Baht for a donation, and bust me all the same once I began shuttering out some snaps.)

It’s not the quantity that so bestirs the imagination of the pitiful farang (okay, partly it is), but rather the quality. I’ve during my travels seen any number of cheesy or otherwise “off” Buddhae – and the south of Thailand may even be the most egregious offender. But as the museum demonstrates, ‘twas not always the case. It’s the facial expressions. Something about their facial expressions and compositions just explodes my emotions. (And in case you don’t think it’s possible to create something so moving inside the space of a two-inch figurine, please make sure to come and see for your own self – you shall not regret!) I’m not gonna say that the images here are as masterfully realised as back at ol’ Angkor Wat…but I am gonna say that it’s very, very close. Damn and blast! why No-Photo here of all places?

Ha!, there’s even one that’s the spitting image of Lou Reed. I shit you not – if you wanna come have a gander, just let me know, and we can arrange a date/time for me to point it out to you. It’s really quite uncanny.

Not Hell nor high water, know, was going to prevent me sneaking a shot of this Coconut grater (this was in a different, less-ardently attended, wing to the Buddhas). In the event there are one or two of you who’ve never to-date been privileged to see a Coconut grater jacking itself off, well…that’s what you’ve got me for, n’est pas? Daresay, some things are just too important to be left to chance.

Did as well grab this shot of a teapot made from a Ostrich egg – but was too chicken to try for anything else — they even had goddam surveillance cameras going on in there. 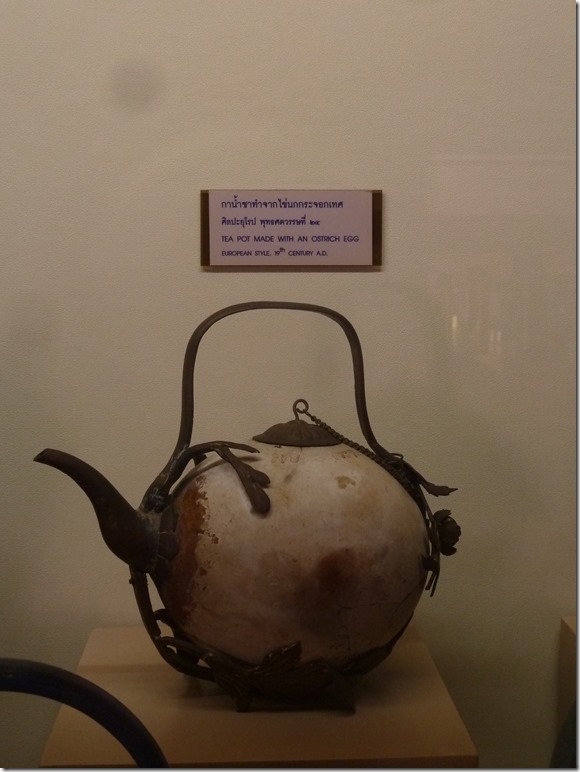 There’s also a Shadow Puppet museum in town, courtesy of southern Thailand’s greatest practitioner of the art. There are some very cool old puppets in there, though the museum is rather small. 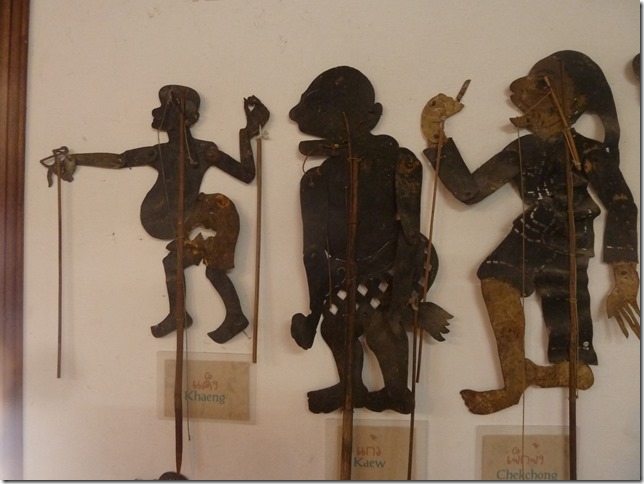 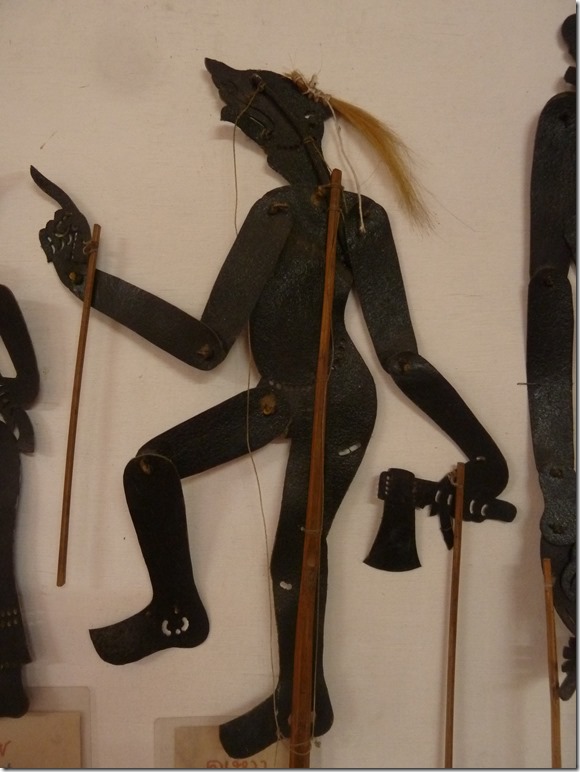 As for the aforementioned festival, I originally thought it was some version of Halloween or Day Of The Dead (or what), ‘cause there are all these silly ghouls and demon masks all over the place (dig the bored-off-his-ass monk in this-here clip). 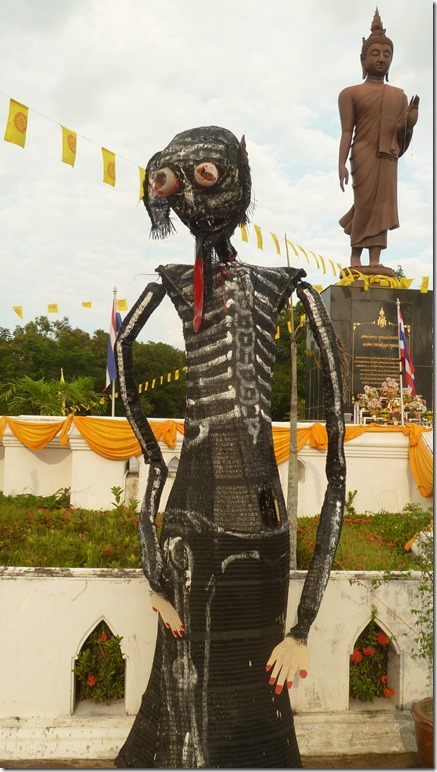 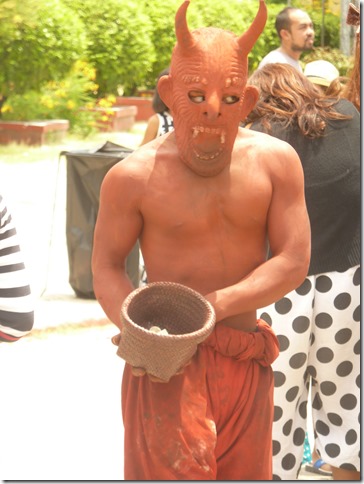 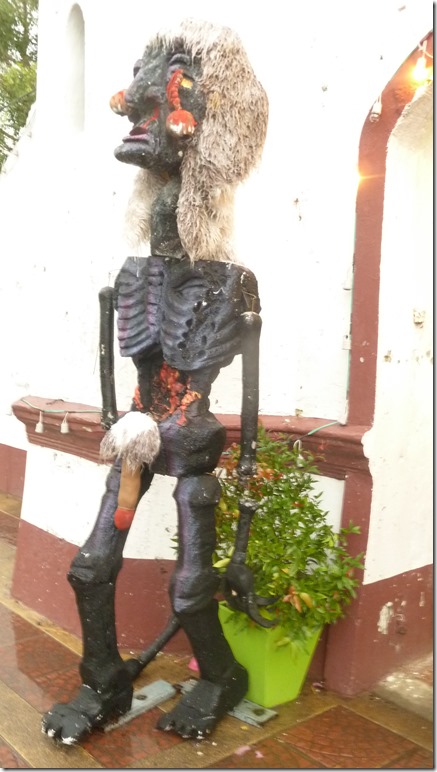 But then, all of the floats are paying homage to the Chedi, and all of the shoppes are selling large, shrink-wrapped cakes in the image of the Chedi. So maybe it’s an annual Chedi Fest, or similar to. Pretty big deal, at any rate – spread over at least four sites: two municipal parks, Wat Whatchamacallit, and another Wat right across the street from. 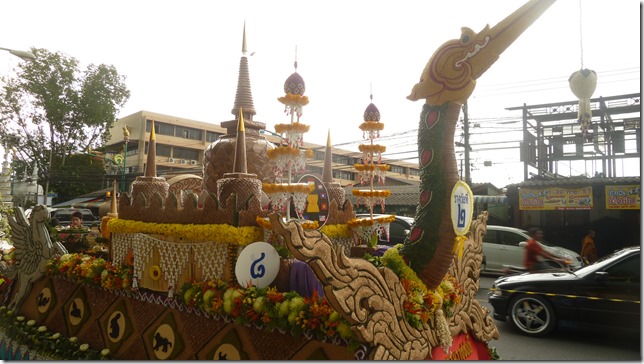 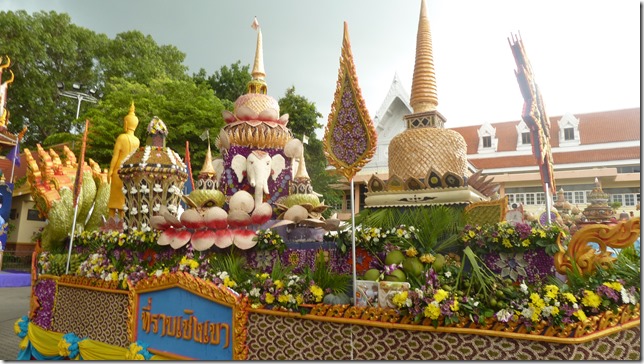 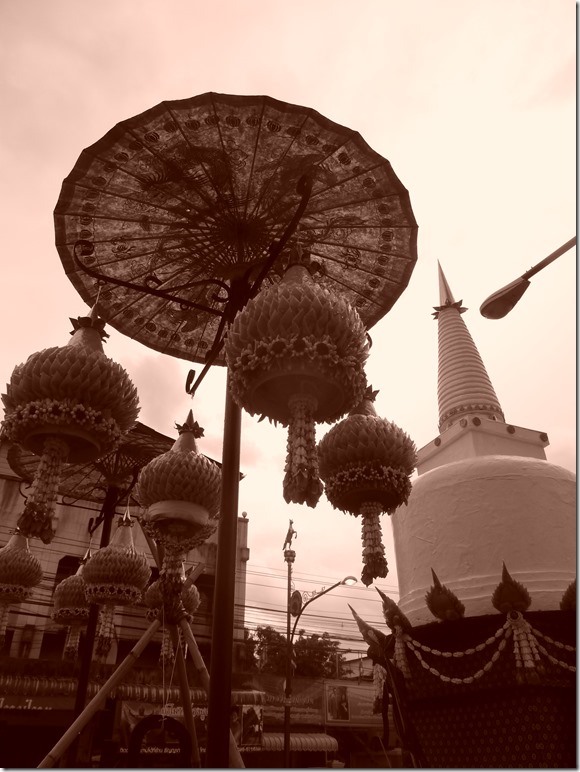 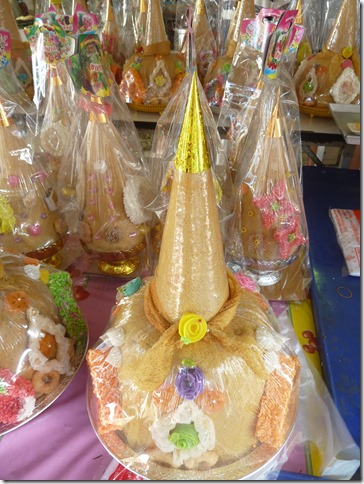 Man I just wished I coulda been here in February when Wat Phra Maha That Woramaha Wihan hosted the Internation Makha Puja Hae Pha Khuen That Festival. Stir that god damn rice porridge all the way over the brim, I would have done! 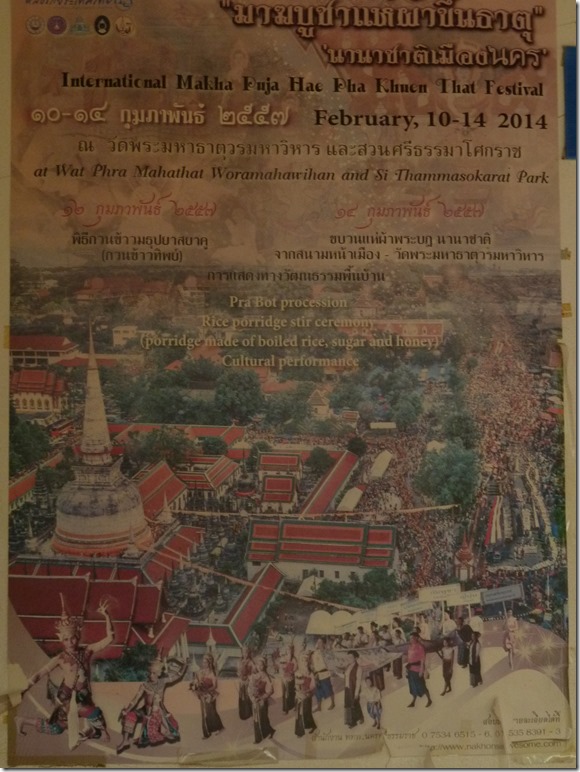 Above words were written up on the evening of Monday the 22nd. Very limited Internet connectivity in Nakhon Si prevented me from uploading ‘til now, freshly arrived in Bangkok via another horrible-yet-wonderful overnight third-class Thai rail journey. Here’s a stray shot back in Hat Yai, from which I could hardly ever avert me eyes’ gaze. 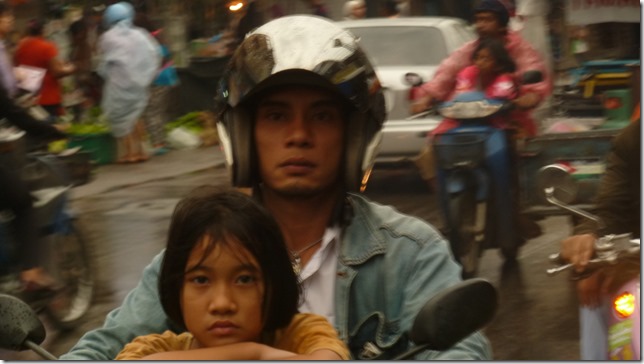