Now on, just call me “Humpty Dumpty”. The 2014 George Town Festival has concluded, leaving among its wake my now shattered and staggering self. From the wondrous Korean duo the opening weekend, to the fabulous visual exhibits scattered all about the island, to the weekly coffee-shop concerts, to the massively entertaining Thai Small Puppet Theatre, to the enormous five-day splash of the Obscura fest-within-the-fest, to the Asian Premiere of The Kitchen, to the stunning performances of the final weekend, the festival managed to boggle one’s mind on an almost daily basis. Furthermore, of course, the Hungry Ghosts festival matched it blow-for-blow all month long before, at the end of last week, ceding the limelight. And, oh yeah, another small little detail: the Ismail Hashim exhibition merely, you know, changed my fricking life.

Shit, that was a month that went by far too quickly. Would love to go back and do it again; but, also, am feeling rather overwhelmed. Have lots of multimedia to share – but as Penang’s Internet services are strictly snail’s-pace, it could take a few. Until then, here are a few other goings on from recent days. It’s all kind of a blur right now, so please forgive if this comes across as woefully haphazard. 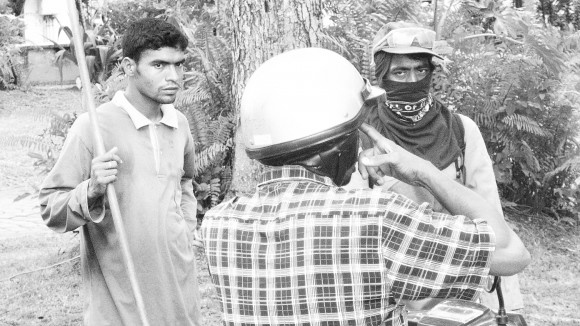 A know-it-when-you-see-it moment. I’m quite certain that this is the best picture I  have ever taken, or will ever take, in my life. No real skill or technique involved – just being in the right place at the right time (and, of course, having the good sense to know that B&W photography conquers all). I guess everybody gets one best photo in their lifetime; this is going to be mine. Shoulda known it would take place here in George Towny Town.

The Muslims down on Campbell Street love to see me doing my various workout moves as I transport my daily fruit haul from the market back to my hotel. Oh, the Chinese do too, but they’re a little more shy, preferring to wave, extend an upraised thumb, and as I pass by excitedly call out, “Exercise!”

The Muslims, on the other hand, like to have me stop and chat with them, and always eagerly gobble up whatever fruit I offer to share. After which, they set in to harassing me for walking ‘round town without a shirt. Some of them – those who have nothing better to do with their time except worry about what other people are doing with theirs — can even get a bit nasty, and one particularly busy-bodied gent even threatened to report me to the po-lice, and whatnot.

But mostly it’s good-natured, especially from the security guards hanging out in front of the gold and jewelry shoppes which line the street. One tells me almost every day that if I don’t start wearing a shirt, he’s going to shoot me (he sits there all the day long with a big rifle draping his lap – so he certainly could do). And somebody gave me a bag of t-shirts, which I had to go and track down a Goodwill to pass on to.

Update: Never did catch his name, but here’s our gun-toting friend; offered to pose for me on account my last day here in town. (Hey, I don’t like guns any more than y’all. It’s not an endorsement, etc….) Much like Abed, below, he had to put his hat on to stand for the photo. 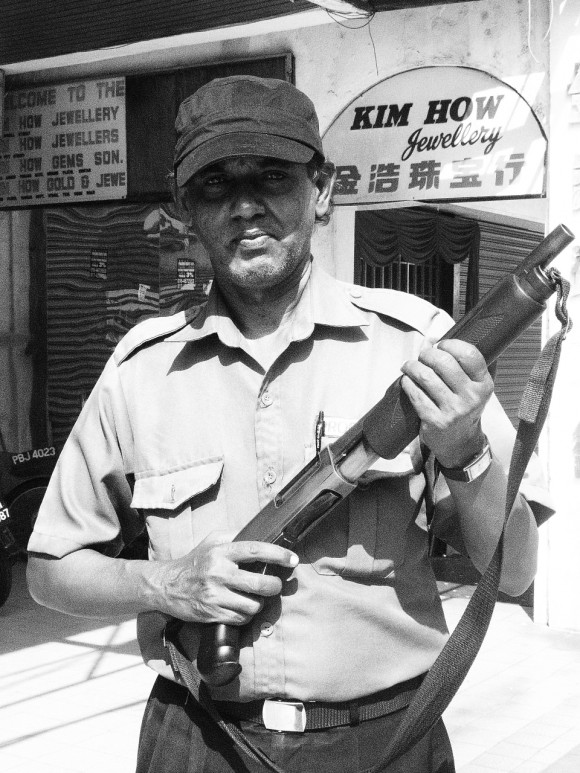 Gotta hand it to all of them, though: Even despite the heat and humidity here, they go about town all bundled up like they was off for the Shackleton Expedition – and, during Ramadan, without drinking any water, neither – without seeming ever to break a sweat. Me, when I do chance to put on a shirt, it’s dripping wet in less than five minutes’ time (no exaggeration).

This cat, name of “Abed”, is perhaps the most interesting of the aforementioned security guards. When I asked to take his photo, he made me wait for him to put his hat on. 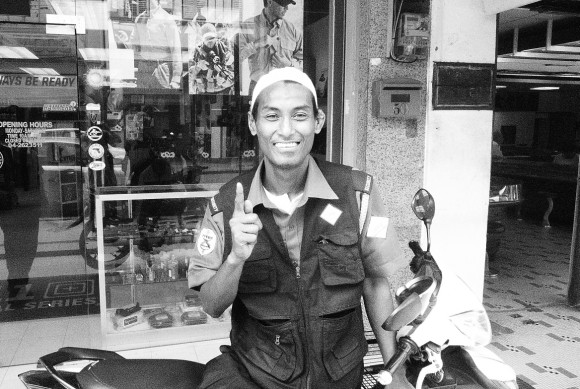 Most people here aren’t so keen on U.S. geography, so I usually just tell them, when they ask, that I’m from the western half of the country. But he kept narrowing it down for me, and when we finally arrived at “Seattle”, and I confirmed it as my home town, he excitedly brought out the old Kurt Cobain card usually reserved for European  fellow-travellers (if Asians know of Seattle, it’s for being the home of Boeing).

We agreed that he had been “the best”, and he further dumbfounded me by responding, when I told him my name, “Ah! Eddie Van Halen!” He says, in answer to my confused wondering how he came to have such knowledge of American popular musics, that he grew up in the ‘70s on the eastern side of the peninsula, as though that should explain everything. Huhn, if you say so. At any rate, he’s a nice guy. It was he who told me where to find the Goodwill (actually called “Kawan Shop”). 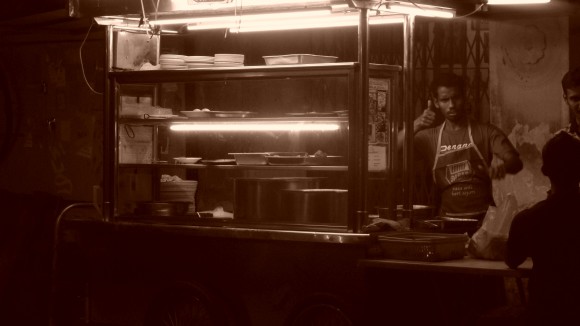 And this cat, who works the Nasi Kandar stand nearest my hotel, is always making me take pictures of him. Gotta admit, he’s photogenic as Hell. One recent day, instead of asking me to photograph him, he asked for a tip. For what – who knew? I offered him a 500-Rupee note which I’d been carrying around since Nepal, expecting him to reject it on sight. Instead, he happily accepted; a fair enough price for keeping me entertained these last two months, I’ll admit.

The Muslim youth are fun, too. Flashing the “Peace” sign as they ride past… 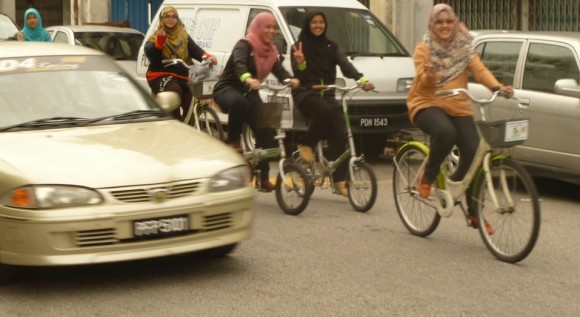 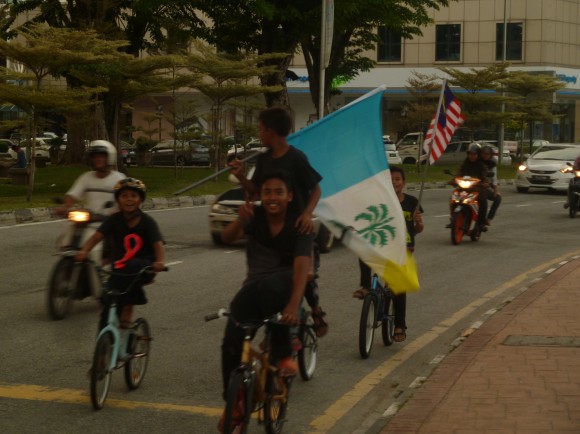 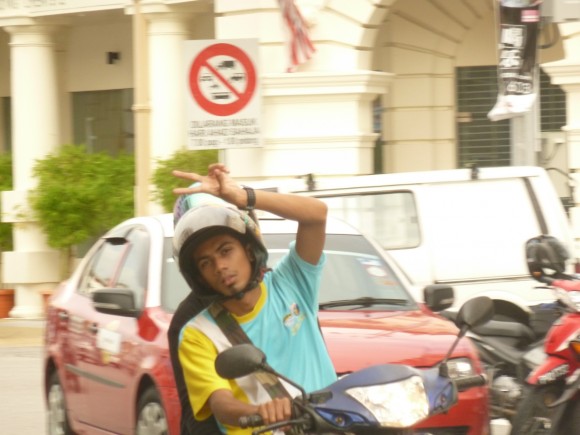 …engaging in conversation as one walks by, or requesting photo-ops, it’s always a fun time.

I was chatting with a  couple of these guys whilst waiting on line for the outhouse, then a while later over at the Esplanade, the entire flock descended and asked for a photo with me. As always, I was more than happy to help out – but then they made me put my shirt on before we could proceed. How does that rate? It’s my pretty face they’re using to sell their magazines with, but they get to dictate the terms? Ah, well, these guys were the most-fun youngsters with whom to hang out since those skate-punks back in Mae Sai. The one to my immediate right in the colour photo implored me to make known to all and sundry his obsession with The Rock (“Rock Johnson”, as he calls him). Now you know. 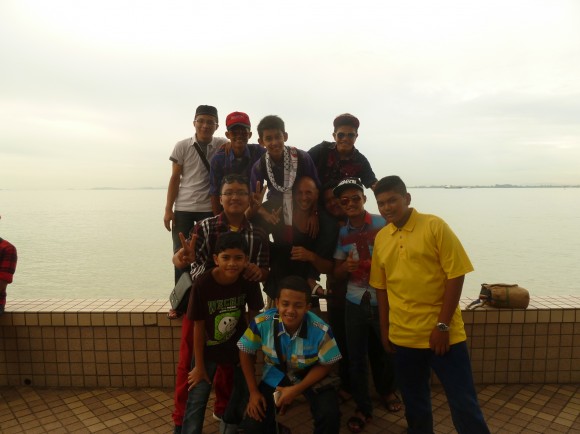 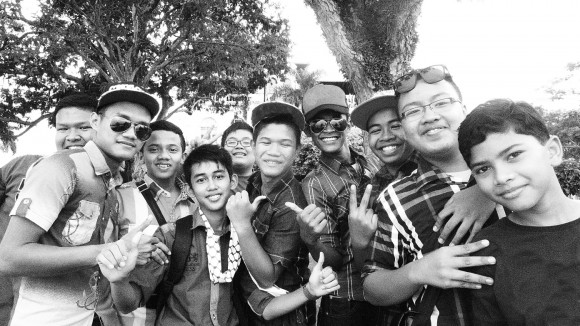 These guys were cool, as well. I really just wanted to get a shot of the dude’s awesome blue blouse and shades, but then his friends insinuated themselves into the photo too, to nice effect. 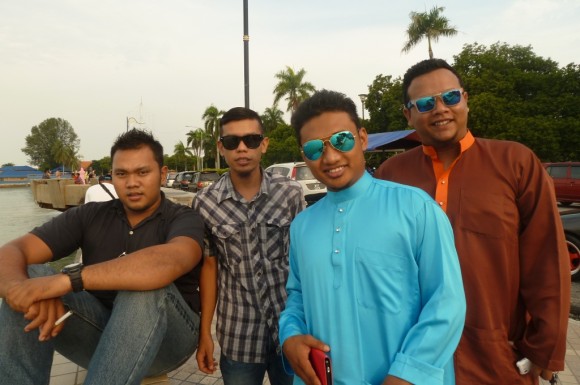 Two of my fave shots from the Obscura Festival. The second one was blown up to quite large dimensions, thought I could just stand and ogle it night and day. To mine eyes, it’s as perfect a photo as one could ever hope to see. 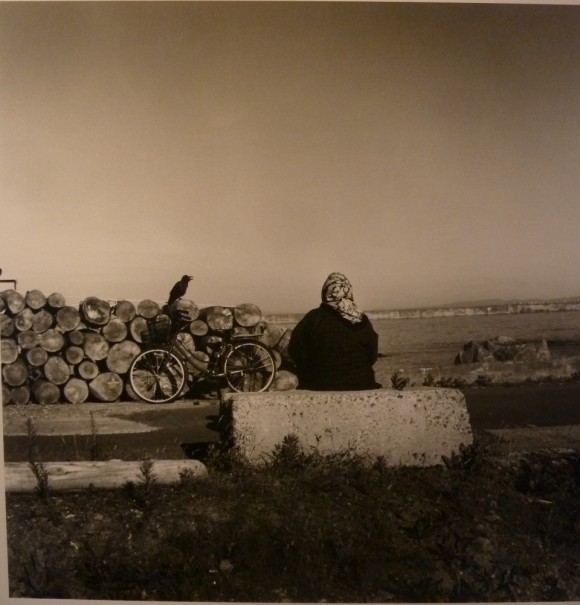 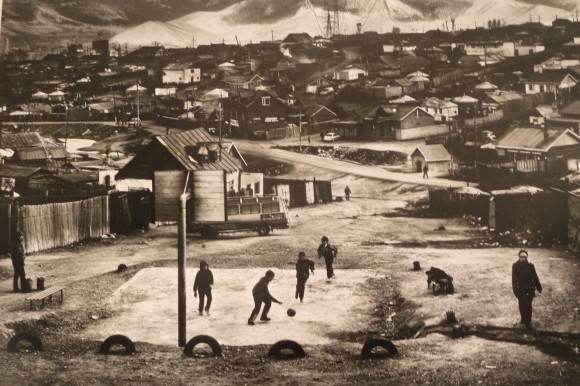 Harlem, circa 1972? No, silly, it’s George Town, circa a couple of weeks ago. How could you not love this place for all its worth? 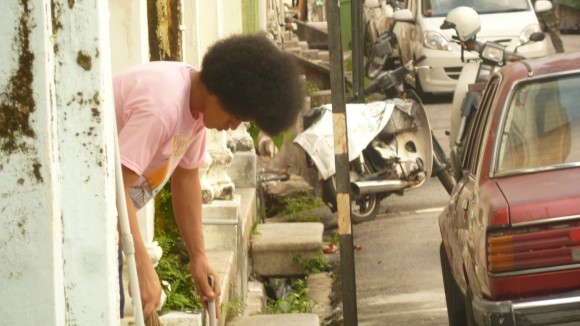 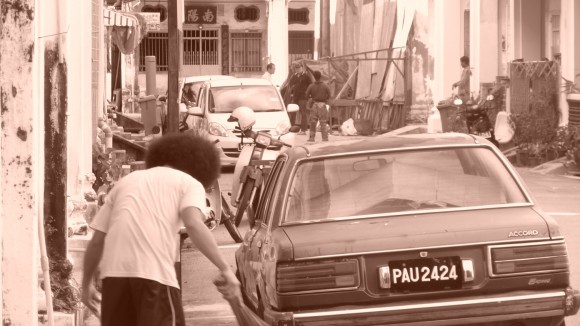 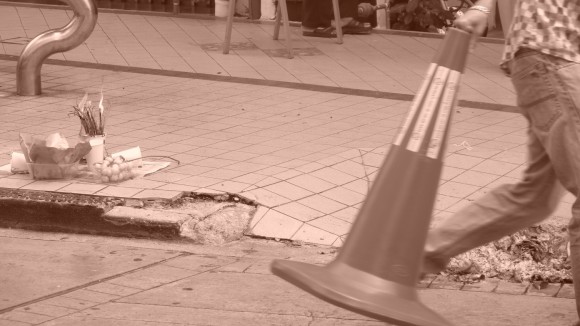 Saw these guys painting the building, and thought it might make a nice shot. Turns out, one of their colleagues was sitting atop his motorbike, right next to me. He explained that the location was to be the site of a 3-D Art Gallery, to open in November. As I seemed interested, he offered to show me around, warning me that it was only fifty percent complete. 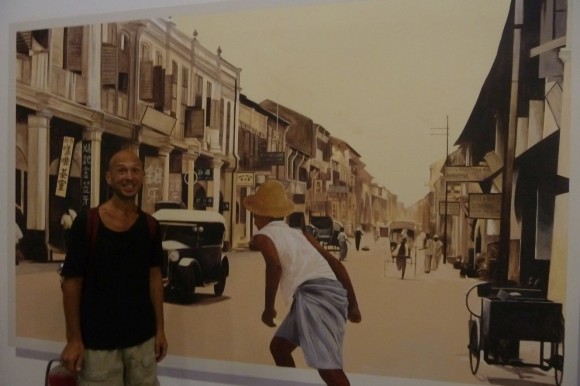 The works are just painted straight onto the walls, so I don’t get how they expect to sell them. Nor did I notice any 3-D effects. Guy’s English was a bit limited, so I didn’t really press upon him too many questions. Some beautiful paintings, at any rate. 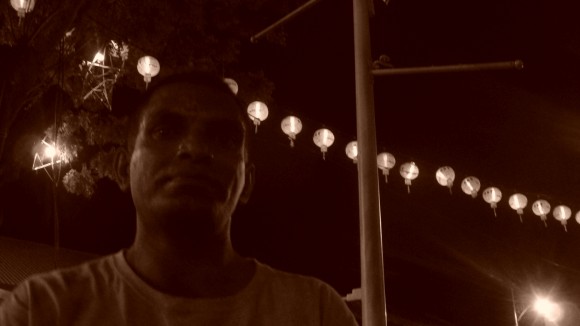 Drunk by aroma and manner; drug-addicted, vegetarian, cancer-stricken, 100% Hindu, Muslim-hating, Jesus-lover by his own words. Pretty interesting guy in his way, but the Jesus crap gets old after a fairly short while.

All right, I won’t run through the litany of how cool, funny, weird, friendly, intelligent, fashionable, and entertaining are the people of Penang. But do come see for yourself — you’ll not regret that! More photos and anecdotes around the bend…