On first impression, Kathmandu feels like a mashup of other Asian cities I’ve visited.

The impossibility of matching maps with street signs is reminiscent of Bangkok’s Chinatown. Not even sure I’ve seen a street sign here, to be honest.

The hyperreal sensation, felt by the pedestrian, of being in a real-live Frogger situation is reminiscent of Chiang Mai. Only here, the motorists and motorcyclists are not only hellbent, but are also in a permanent state of overbeep.  Have a look and listen…

…Tell ya what: whoever has the horn-repair concession around here is one lucky son of a bitch!

The livestock lazing freely in the roadway is reminiscent of Laos. (Though the Buddha hisself was born here in Nepal, the country is predominantly Hindu.)

The constant badgering from Rickshaw drivers is reminiscent of Siem Reap – there it was Tuk-Tuk drivers, of course.

The music pumping out of the shops is Reminiscent of George Town.

The dust and construction everywhere are Reminiscent of Phonsavanh and Vang Vieng.

The, uh, dubious state of the sidewalks (to use the term loosely) is reminiscent of George Town and Chiang Mai. 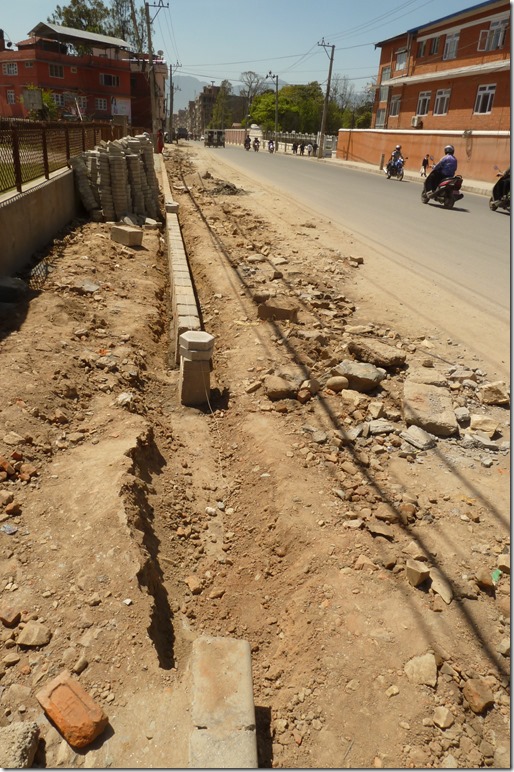 The street vendors selling veggies and slabs of meat are reminiscent of Luang Prabang. 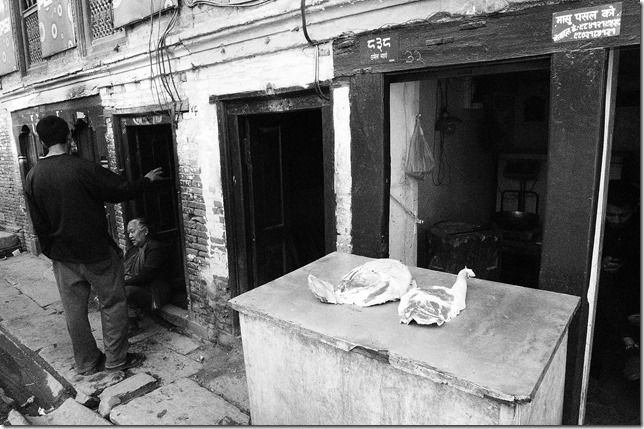 You’ll note the absence of makeshift fans employed in Luang Prabang to keep the flies off the meat. Truthfully, though, there isn’t much meat for sale – mostly veggies. The fruit scene’s not so bad, either: the grapes and oranges are delish, the mangoes not so much. Have yet to sample, but apples, watermelons, and papayas also abound. There’re even a few coconuts and small jakfruits here and about.

The humorous signage is reminiscent of, well, everywhere else in Asia. 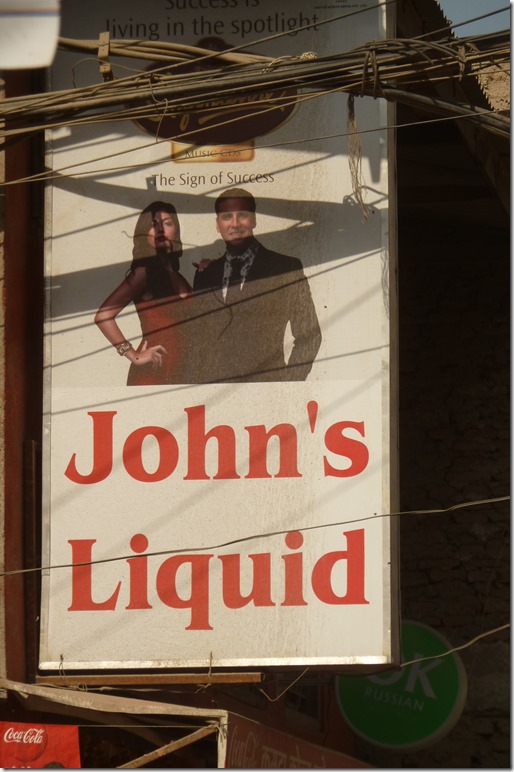 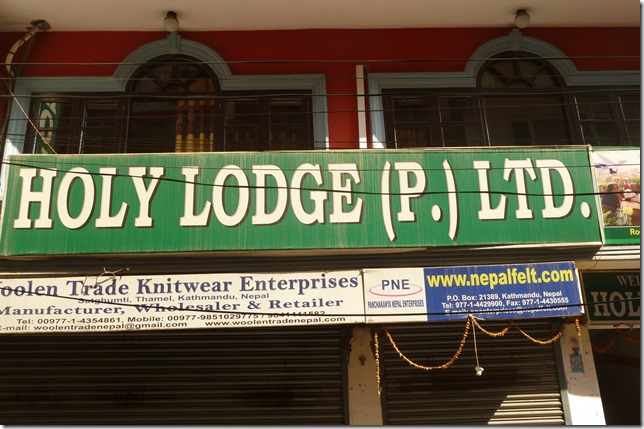 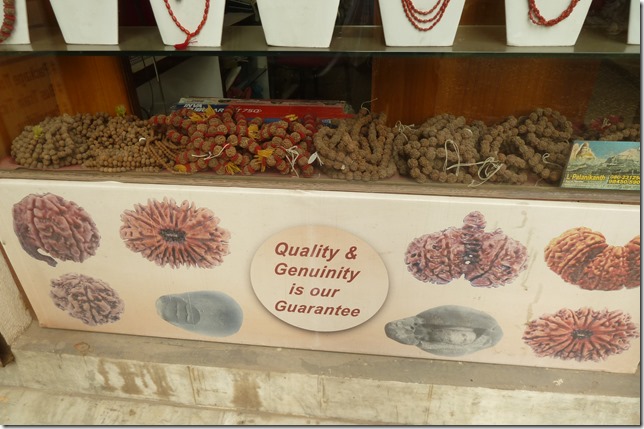 Begging your pardon, but allow me to also throw in a great sign from the Taipei airport: 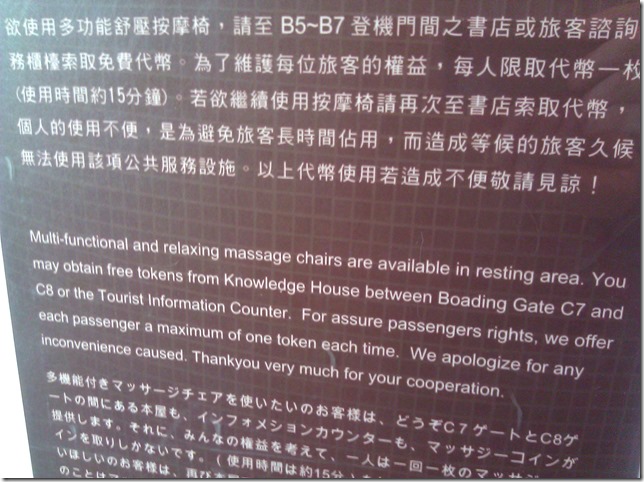 Also like everywhere else, all kinds of weird/cool shit for sale… 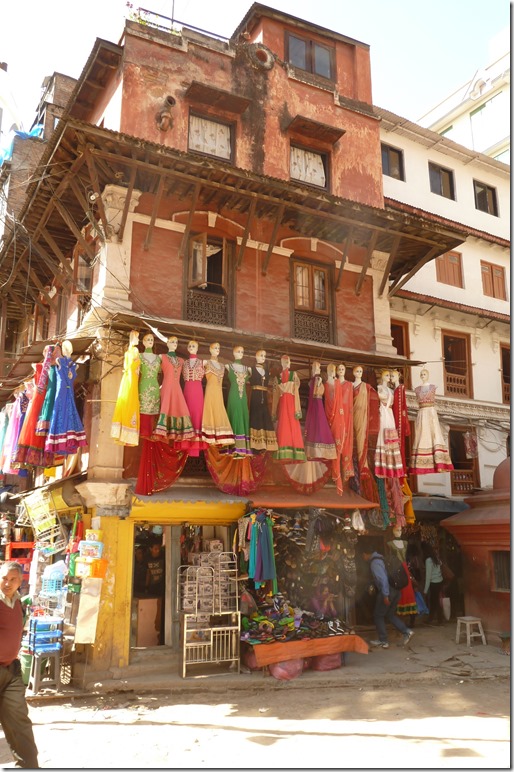 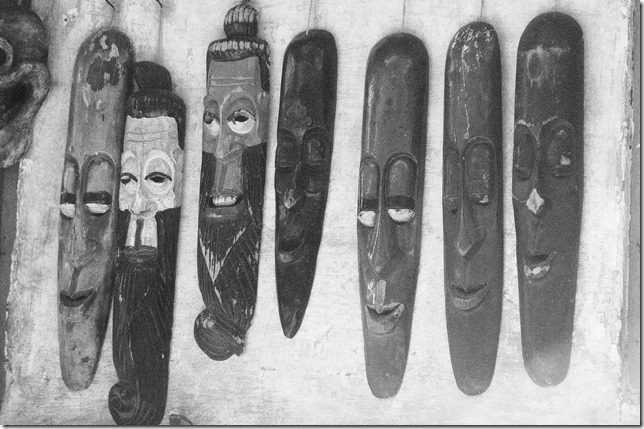 …as well as great people-watching. 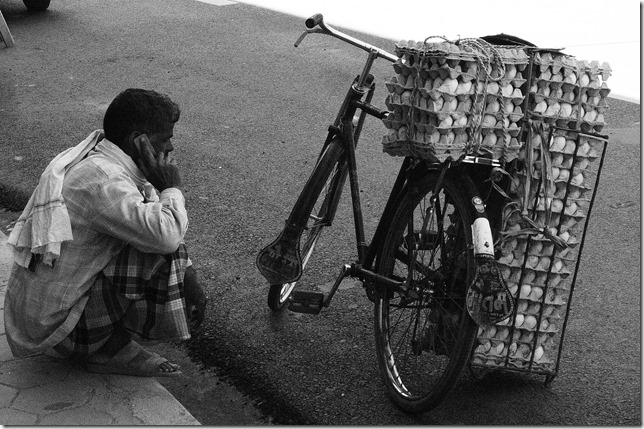 Though it reminds of other locales – “Same same,” to use the parlance of their times – Kathmandu feels even more manic and even more chaotic than the others. Amped up to eleven, like. Of course, it may simply be the culture-shock inherent in touching down after a long time away. Either way, colour me entertained! Am thoroughly reminded of first days in Bangkok, two years ago, with whole days just spent wandering the streets, deliciously, deliriously agog at the sights and sounds playing out around me.

The weather here is kind of perfect: low-80s during the days, with plenty of sun. Though it cools off, after 6:00, a little too rapidly for my taste, the upside is that there aren’t any mosquitoes. Pretty decent trade-off! Also, the Dawn Chorus is incredibly loud — as though every bird in the wilderness were here to participate the fun good times.

And what of the mountains, the almighty Himalayas towering majestically over the consciousness of the Nepali nation? Yeah, well, if one squints one’s eyes just so, the foothills can kinda sorta be made out through the valley’s (in)famous sheen of smoggy pollution. There are depictions to be found, however. 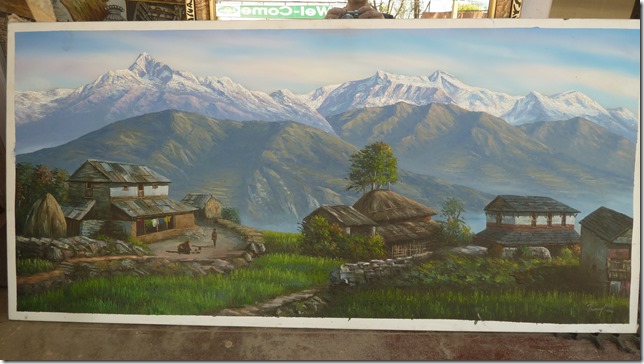 It’s not as though the polluting activities are contributing to electrification. Not for lack of trying… 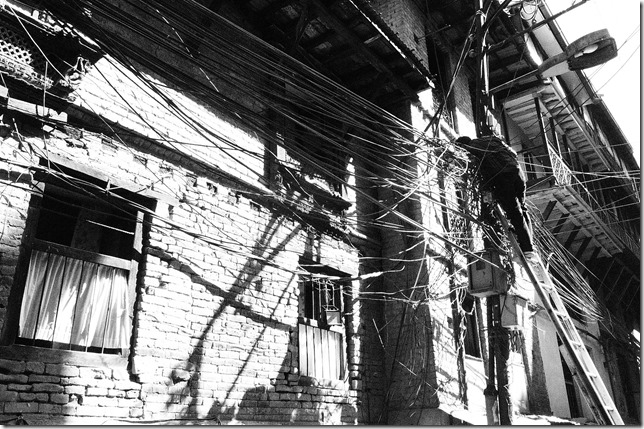 …but city-wide load-shedding has the reception desk here at my hostel lit by candles at night (though the rooftop bar/hangout feels the love of the generator’s outputs). Signs in the airport boast of Nepal’s having been blessed with the World’s second-most-bountiful water resources, after Brasil’s; and the guidebook hints that the country’s rivers await exploitation. So that may be the future: killing the rivers off with dams so that us spoilt Westerners can keep all of our devices charged up.

But for the present: electrical/telephonic resources being limited as they are, expect fewer updates from yours truly than were in evidence the last time around.

A few notes from the twenty-hour layover in KL. Firstly, the city is a fucking oven right now.  Mid-90s during the day, cooling off to 77 degrees overnight. Secondly, the teevee show is, as one could surely expect, completely and utterly obsessed with the whereabouts of the missing Malaysian airliner.

In other news, the new packing system is working pretty well so far: three flights completed, no bags checked. Despite Air Asia’s ominous warning that carry-on limits would be strictly enforced – and the signs all over KL’s so-called Low Cost Terminal indicating that “Size Matters” – there wasn’t even a hint of crackdown. KL security did, alas, confiscate my travel-scissors, which had survived both Sea-Tac’s and TPE’s Security Departments. Oh, well.