This place is fucking crazy! But in all the best ways. The wackily manic street scenes can get a little bit overwhelming, it’s true; but they’re so fascinating that it’s difficult to pry oneself away to take in some needed peace and quiet.

Have probably given this Travel Tip before, but, here ‘tis again: if you want locals to talk to you, walking around barefoot is the ticket. I mean, they’re possibly going to consider you a fucking nutter and all. But that’s okay.

Even had a little experiment to-day. As my soles aren’t quiet yet in peak-season form, I took half the day shod, and half barefoot. During the former half, my existence was barely, if at all, noticed. During the latter, just the opposite. Two schoolboys, after grilling me over my bare feet, even offered to give me a Nepali language lesson. They taught me how to say, “What’s up?” – but I already forgot it. They also offered to show me around the Monkey Temple, but I had some other shit that I had to take care of instead, unfortunately.

So many great photo opportunities to-day, but I kept missing out, as they were in dynamic situations. Most notable: a man walking (well, pulling is more like, as they were being pretty recalcitrant) two goats down the street. By the time I’d got my camera fired up, they were around the corner and gone. Later, spied another gentlemen waiting for the bus with his goat in tow. Maybe Friday is take-your-goat-to-work day here? Not sure…

The most humorous situation was walking down a narrow, bustling, dirt-road alley, and along come… 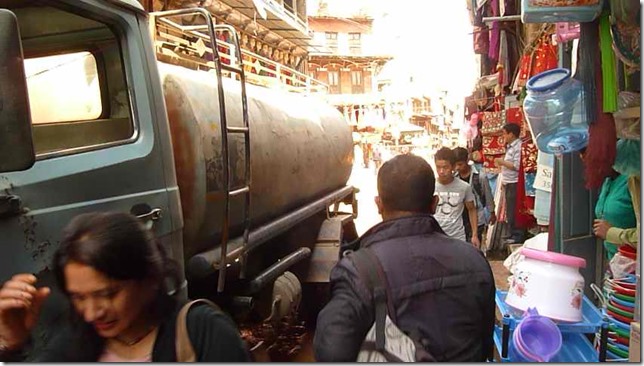 The truck was backing down the alley, with a dude on sitting on the back bumper, firing a fucking water cannon up into the air. One presumes it was to mitigate the dust; but adding this element into the already chaotic scene was…well, chaos-squared, I suppose. Barely managed, meself, to avoid getting soaked – but it’d have been worth it anyway, just to have been privileged to witness everybody’s pissed-off reactions. 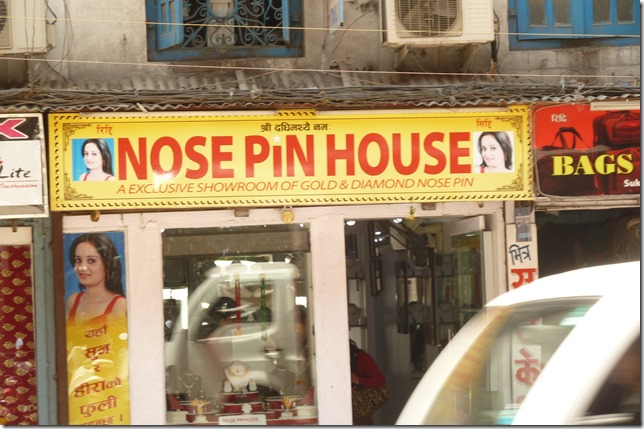 Coolest thing about Kathmanduites is as follows. You always see them – mostly kids and teens, but some adults, too – walking in pairs (or even three or four abreast) with linked arms, or with one’s arm over the other’s shoulder. Not sure what exactly the deal is, apart from a simple show of friendship, but it’s ever so endearing.

Also, though it’s no De Talak, the community here at the hostel is really great. Nice mixture of people just returning from trekking, those getting ready to go trekking, and those who live to hang out and smoke weed (“hash” as it’s only ever called here) all the day long. Lots of people have been spending many many months shuttling between Nepal and India. As in Southeast Asia, it’s mostly Europeans; but there are more North Americans, and fewer Australians, than in Southeast Asia.

Oh, yeah. A taxi-driver tried to run my dimpled ass over, but I bade him, before proceeding, to hold off and let me get out of the way first.