Train from Bangkok to Nong Khai was a fit-throwing Hellride of certain magnitude. Departed Bangkok about an hour behind schedule, owing to heavy rains. Then we made a very long layover a few hours north – the reason was explained numerous times over the station’s PA…but only in Thai. Then we never seemed to get up a good head of steam, barely ever breaking thirty miles per the hour.

It’s been dry as a bone here, more’s the pity. Did one evening get to see a quite magnificent electrical storm off to the south and east; and there are some lovely clouds floating by… 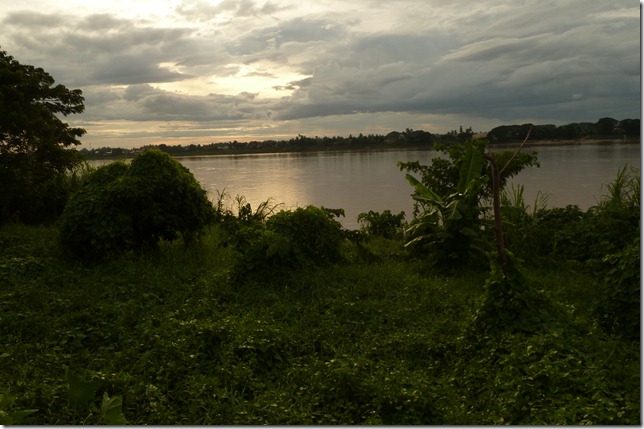 …but no storms. In fact, it’s been very hot and humid. Hadn’t wanted to do much more than chill and watch the river anyway; but the heat has certainly reinforced this desire.

The guest house I’d loved so much from my previous visit is closed for renovations, dammit all. The one I’m staying at instead is nice, but I prefer the former. Anyway, I was privileged, my first morning here, to be woken up by some kind of a party/revival going on down on the Nagarina:

The locals here are even more outgoing and fun good folk with whom to interact than I’d recalled from my visit here in March. They’re all cracking me up big-style calling me “farang” right to my face. Not in a pejorative or derisive way; but rather in place of a name.

Arriving at a vendor’s stall in the market, for example: “Hey, farang!” And which greeting followed by a long stream of Thai verbiage, taken by said farang to mean something on the order of, “These are the number-one vegetables of all time!”

Or, for another example, calling out “Farang!” after I’d traveled half-way down the block; then motioning me to return to where they were sitting, and offering me a pair of flip-flops. (Also offered a pair by a monk and several novices I passed while they were sweeping the sidewalk.)

I’ve noticed the phenomenon because it’s not occurred in any other place to which I’ve made visit – even including here during my previous stay. It’s fun. It’s just Thailand all over, really: fun, cool, weird, goofy, unexpected.

Oh, unlike in Chiang Rai where (one will recall) the locals were reluctant to accept my attempted Lychee giftings; here in Nong Khai they’re all in  for the Longans (which Thais call “Lum Yai”). Rather than the three or four pieces I always expect them to take, they’re grabbing entire handsful. One lady even made me wait for her to go into her house and return with a big bowl into which to scoop a prodigious quantity!

Yep, the Lum Yai are going off right now. And I love them, truly I do. But they so pale in comparison to the all-powerful Lychee, whose season came and went in the blink of an eye, that it’s a bit of a downer having to settle for the former.

Also et one Durian here, the first day I arrived. It wasn’t horrible, but definitely not worth the lofty post-season asking price. Pummelo are coming into season as well; but they seem not quite yet ready for prime time (pace their vendors’ insistent exhortations).

Anyhow, so I had a kind of a strange encounter with a monk the other day. I was sitting on the wall, eating Lum Yai and watching the river; and down the way come said monk, rolling a compact disc along the top of the wall. When he looked up and noticed me sitting there, he abruptly frisbee-ed the CD into the greenbelt betwixt the river and the wall, then passed me by without uttering a word.

What was it, an AOL disc, or something? And, had he planned all along to jettison the disc at this time, or’d he do so just then (as it seemed) because of his having seen me watching him? If the latter, why so?

Most puzzling of all, why are Asians so cavalier about littering? Granted, tossing an item of plastic on the ground is probably no worse than placing it in a garbage can to then be sent off to a landfill. But the mountains of garbage strewn all about the region are at the very least unsightly. And what does it mean that a damned monk, of all people, will so happily take part in the practice?

On a happier note, made a return visit to Sala Kaew Ku. Realised that it was nearer-by than I’d thought, so took it on the heel and toe this time, rather than getting a tuk-tuk. About an hour-and-a-half’s walk in each direction.

I was worried that the second visit might, as had been the case visiting my favourite Angkor temples for the second times, feel like an anti-climax. And it was so, at first. But the more I just kept walking around, the more I  kept noticing things I’d not noticed on my previous visit, and the more I found the old appreciation growing for the things I had noticed, that I finally blurted out, “This place is so fucking awesome!”

I still can’t believe the admission is only twenty Baht. More pics over at the Flickr page. 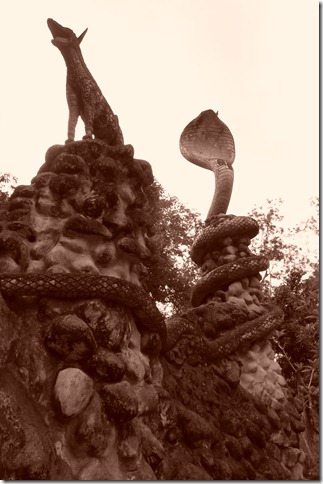 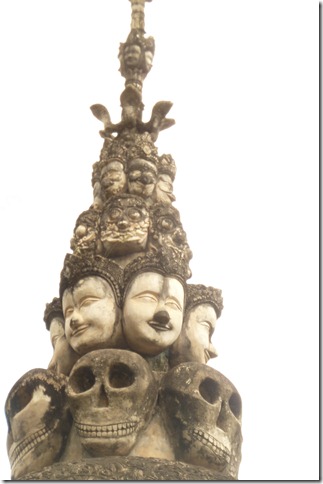 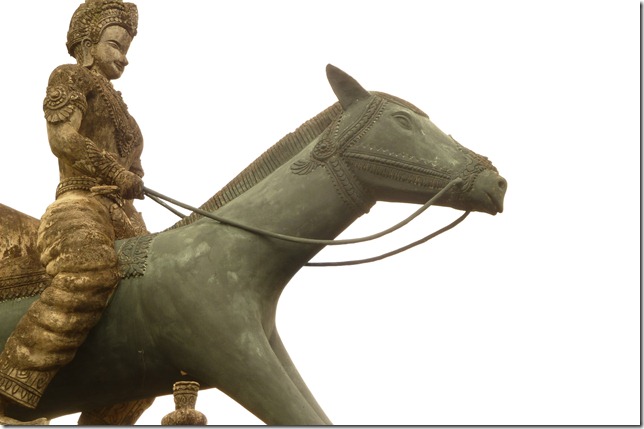 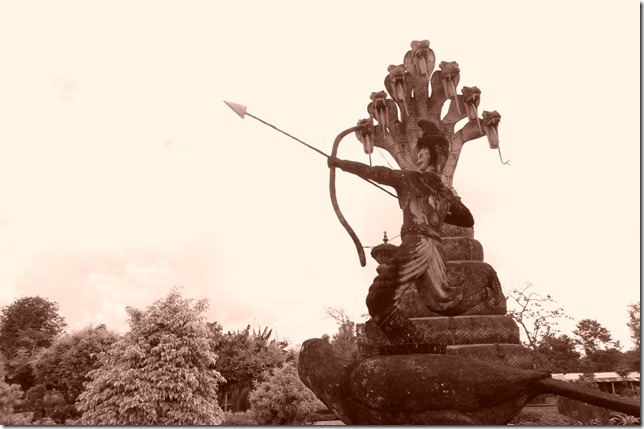 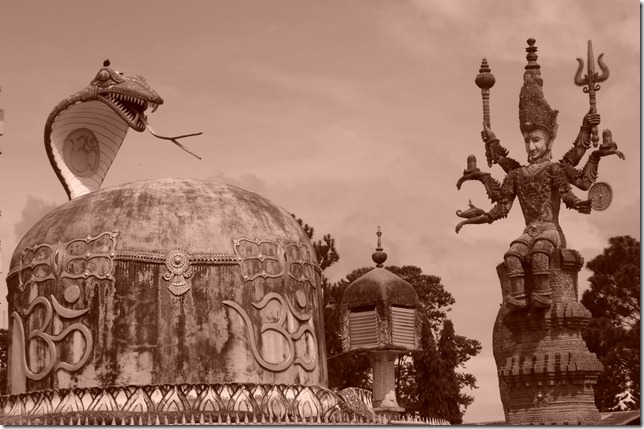 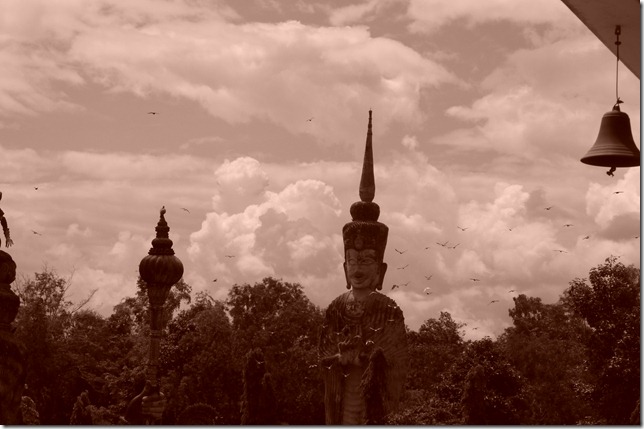 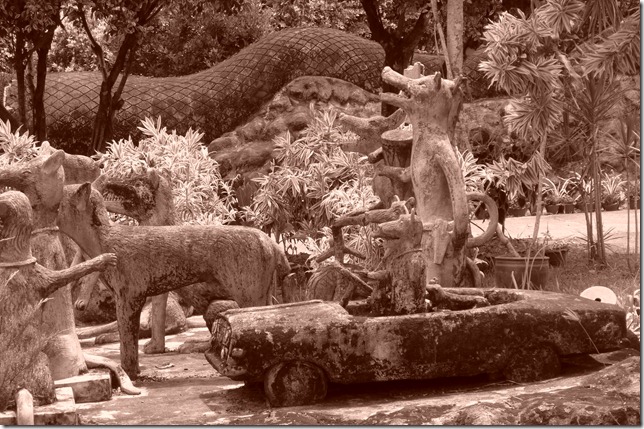 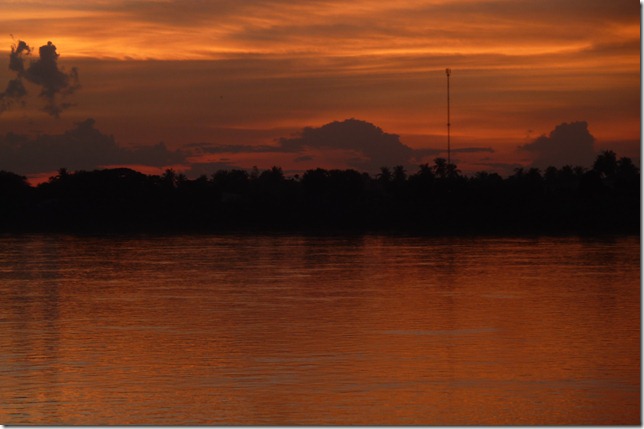 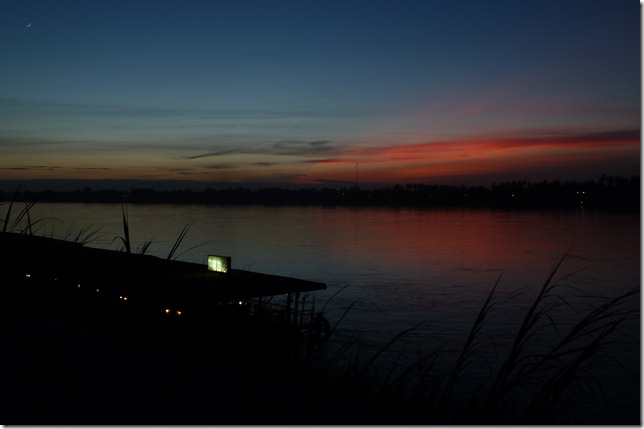 Somehow, there aren’t any mosquitoes here! I mean, no matter how late one will stay out at night, they just never arrive. This was certainly not the case back in March – maybe ‘cause it was raining very good one then, while now it’s been breezy and dry.