[dc]B[/dc]ack in Bangkok, where it’s currently raining like a motherfucker. Kind of puts the kibosh on the day’s plans — but it’s also so much fun to watch! So, my passport is stamped for the twenty-third, my plan, upon arriving, having been to somehow finagle a cheap flight before that date (airfare between Bangkok in Seattle is almost double what it had been when I came out here in January).

However! Rata has invited me to go camping with herself and ten of her friends, at a horse farm a few hours north of here, for a few days beginning on the second. Who could refuse an offer like that? (And if her friends are anything like her, it may well end up being the stone-cold highlight if my little Asia journey.)

So, this means I needs must make a border run between now and then. Choices are Poi Pet, in Cambodia (the closest to Bangkok, but I’ve really no desire to experience that particular crossing again); Vientiane (would love to visit Nong Khai hard-by-the-Mekong during rainy season, but it’d set me back $35); and Malaysia (free, Durian still in season, but the furthest distance of the three).

The night train from Hat Yai to Bangkok was fucking insane in the membrane! Just fucking psycho. When you come to Asia, don’t you dare ever travel any other way that third-class!

Started off with a young lad of sixteen or seventeen trying to pick me up while I was sitting waiting for the departure time. Ah, welcome back to Thailand.

Next up, the info desk, after examining my ticket, told me the incorrect platform from which to board the train. So I initially got on the wrong train (which, oddly enough, was to depart at about the same time as my train, and was also bound for Bangkok). Something didn’t look quite right in my coach – why had I been assigned second-class seats on a third-class fare? Got it sorted out soon enough. Luckily my train had not yet departed the station – I’d have been one pissed off farang.

My coach was super-assed crowded – ha, haaaa: sleep on this night would be impossible. It’s  okay; plenty to keep oneself occupied. Somehow the bathroom’s ass-sprayer hose kept turning itself on, and eventually sending rivers of water out into the train and down the aisle. The dude tasked with mopping it up every time had a more- and more-bad attitude with each passing iteration. Too funny!

Not quite so funny: twenty-something man across from me spent the whole ride doing only two things; viz., sleeping, or, glaring at me as though he needed only to figure out by what method he would do me in — ice-pick to the back, or blunt instrument to the noggin’?

Meanwhile, the bench behind him was all-night party central. They’d brought three-gallon paint buckets on top of which to place the booze, and were ripping it up ’til well past the wee hours. Very nice chaps, actually: offered me a brew each and every time I’d get up to use the can.

Malaysian dude from an adjacent coach kept coming by to chat with me. I’d promised him I could lead he and his wife to good accommodation in Bangkok. Initially mistook him for an Italiano, to be honest, judging by his looks and his accent. As the evening was getting on in time, he came and sat down across from me.

“I am already drunk.” He tried his best to get me to have a drink with him; but finally got the picture that I’d no desire to do. So then he started talking about god. Fucking going on and on.

I’d thought him to be a Christian, but it turned out he was Muslim. “But for a Muslim to drink is…haram, no?” He acknowledged his transgression, taking some solace in the reality that at least he doesn’t drink every day.

After listening to his blither and blather for a while, I finally snapped and let loose with an expletive-fueled tirade, beginning with, “God can go fuck himself,” and ending with, “If I never heard the fucking word ‘god’ again so long as I live, I would be a very happy person…but I have a feeling I am going to hear it again, and in about five seconds’ time, eh?”

Yes, my feelings’ prescience were soon proved out. So followed another tirade on my part, which was nasty enough that when I saw him at the station in Bangkok, he told me that he didn’t any longer desire my assistance in finding a place to stay. Oh, well; his loss.

For De Talak is on exceedingly fine form these days. Damien, the Frenchman, has returned from KL, sporting a huge, gnarly scar on his right forearm. Something to do with broken glass, and his having discovered that he still fears death after all.

He’s as entertaining as he’s ever been. Didja know that it’s easy to smuggle guns into France, but not easy (nor cheap) to obtain ammo? He says it’s a real big problem in the French mafia: too many guns, not enough bullets.

Yesterday, he walked into the joint, and I casually greeted him, “What’s up, Buddha?” No idea why that particular salutation popped into my head, but he seemed slightly offended.

Rolling on the ground laughing was I! A nickel for every time some random passerby, in Seattle, has called out, “What’s up, Moby?” or similar. But this was the first such occurrence in Asia.

Throughout the night, he kept introducing newly-arriving hostel guests to me: “This is my friend, Moby…”

Three super-cool Indonesian lads with whom I’m dorming have invited me to their hometown on Sulawesi next January for excellent Durian feasting. And so now my itinerary for next year is already falling into place.

And three super-hilarious American girls had me in stitches all night long; one of them had me flat-out busting a gut when she started asking about “the 206” (they’re from Arizona and California). But now they’ve gone off to Chiang Mai, unfortunately. Still, someone will take up their slack, as someone always does here.

Yep, every time I return to Bangkok, I wonder why it is that I ever left?

The first night back, I went to aerobics, even sans juggling balls; just wanted to soak some rays, and hear the music, and imbibe the general Lumphini aura. When I arrived, a little four- or five-year old boy began lecturing me, quite insistently, in Thai. I could only shrug and plead, “Sorry, little man; I don’t know what you’re saying.”

Finally, he busted out with some hand-jive juggling-pantomime. So that’s what it’s all about! We permit you to enjoy the aerobics scene, farang, but at a price! The kids are particularly enchanted by the juggling action; but I was pretty shocked that this one actually recognised me.

Did find some balls yesterday, Wednesday, on Khao San. They’re kind of bullshit, too small and hard; but I was able to haggle a pretty cheap price for them, so I suppose they’ll suffice. 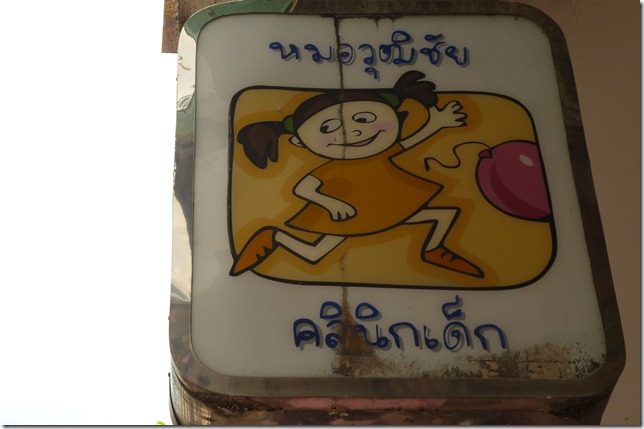 And here’s another nice temple interior. 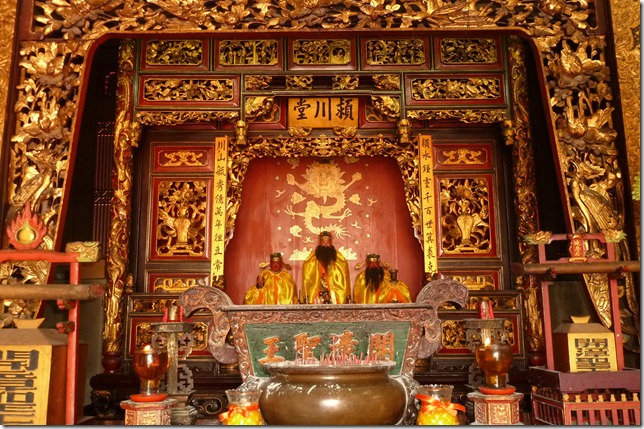 And a cool piece spotted in a gallery. 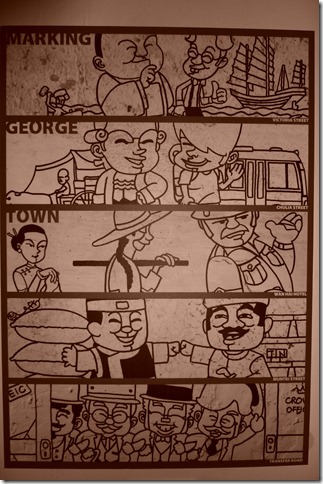 Managed to make my peace with Little India; able finally to spend a lot of time there listening to the incredible music and taking in the wafting aromas without feeling overwhelming urges to eat some cooked food all up in there. Kinda surprised I pulled it off, frankly!

Leaving the hostel, I added my imprimatur to the big board. See if you can find it. 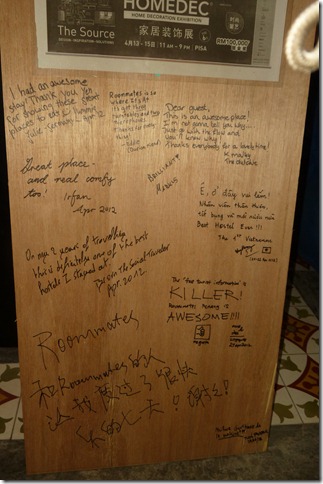 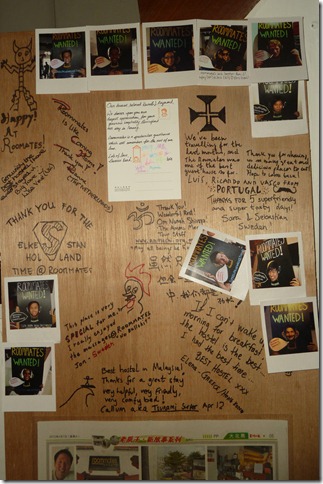 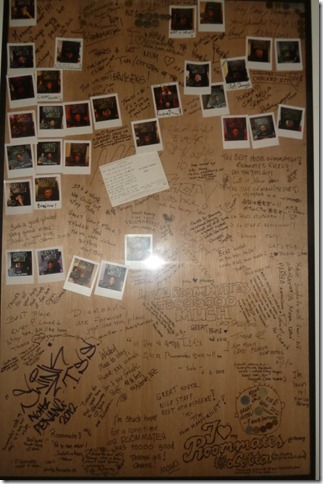 As far as The Manganiyar is concerned, my audio is unlistenable. I think there are official recordings, though, if one were to poke around. The video, on the other hand, turned out surprisingly well, given the lighting and my distance from the stage. If I’d known they’d turn out so well, I’d have taken much longer clips! Oh, well.

And here are a few photos – more available at the Flickr page. 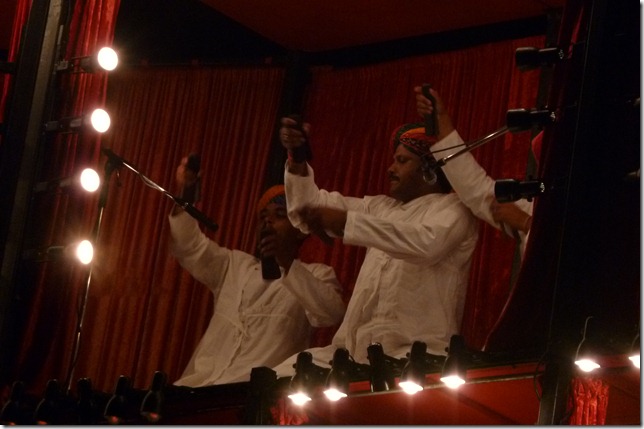 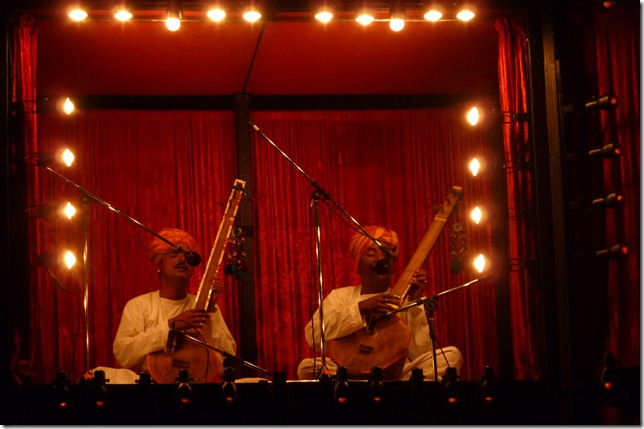 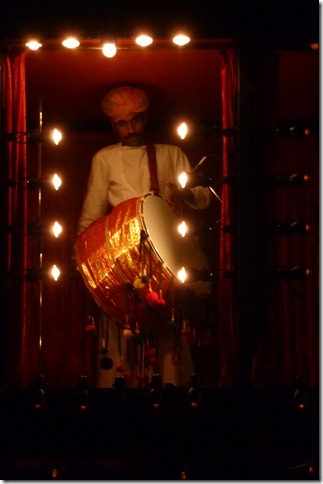 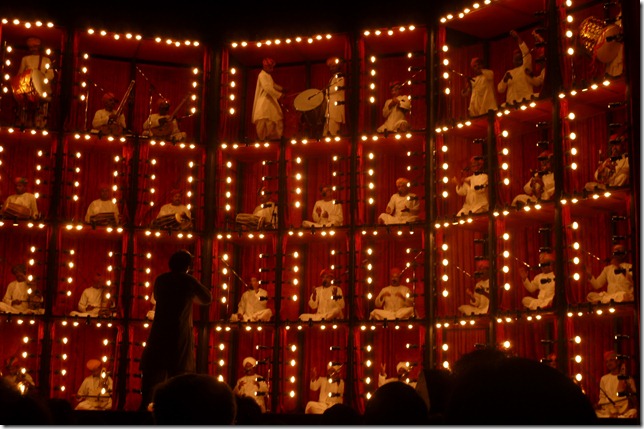 [dc]F[/dc]inally, another recommendation for all y’alls. Have discovered the Low Times Podcast, and been digging into its archives. Episode #1, from late in 2011, features the great Tom Scharpling (host of the awe-inspiring Best Show) interviewing the greatest (drummer ever in the World), Janet Weiss.

I’ve read a few interviews with Janet, but pretty sure this is the first audio interview I’ve heard with her. Articulate, learned, and funny, she’s a helluva good raconteur. She talks of growing up in Hollywood, and learning to play the drums, and her life in music.

And, she talks about the end of Sleater-Kinney. Says she’d never told the story before; and I personally have not heard of Corin or Carrie having told it. Nothing too dramatic, in the end — just musical differences setting in.

Even still, listening to her tell it made me start bawling my fool head off.

Somewhat surprisingly, perhaps, she’s not the least bit modest discussing the band’s place in history, saying, “There will never be another band like that,” and comparing it to a “freight train”, and opining that the band was too special to carry on past its peak.