Well I cannot seem to hold on to a fucking thought
This whirlwind’s got me and I’m racing out the door
It’s nice for a while, but when I try to focus
All of my convictions come crashing down around me again

But in the end, the Durianist’s “convictions come crashing down” around him or her again…and again…and again. Never been addicted to smack, nor even alcohol (or what have you). But this is surely akin. Of course, Durian is known as one of the more nutritious foods. It’s considered the King Of Fruits not only for its deliciousity, but also for its exceptional food value.

But who wants to be an zombified Fat/Lazy Fuck? Perhaps this is why the season is so brief in most places; generally clocking in at a few months’ time: okay, be a Fat/Lazy Fuck for a coupla months each year, but otherwise eating Mangoes and stuff.

Truth be told, I didn’t come to the World Durian Festival 2012 to not eat Durian. Will attempt, at Fest’s conclusion, to exert some modicum of self-control. As for to-day, however, scored either some frighteningly kick-assed deals…or maybe taken for a ride. Suspect the former.

It’s nearing the conclusion now; tomorrow the Festival’s last and final hurrah. So many vendors, so many Durian, and (frankly) surprisingly few attendees can mean this: there are now many Durian in the “Farang Zone”; i.e., perfectly, wonderfully, self-openingly ripe. Thais won’t buy ‘em this way; so the hawk-eyed vendors call out to the passing Farang (who’d thought he’d already made all the Durian purchases required for the day’s eating), “Hey you!” — gesticulating toward the basket to which the fully ripe Durian have been relocated.

To give an idea of the poor attendance (actually, it was pretty packed last weekend), here’s the scene from a few nights ago, at the mainstage. Gots to love the one guy up front though, in for all his worth!

The band were quite thumping, too. And what a backdrop! 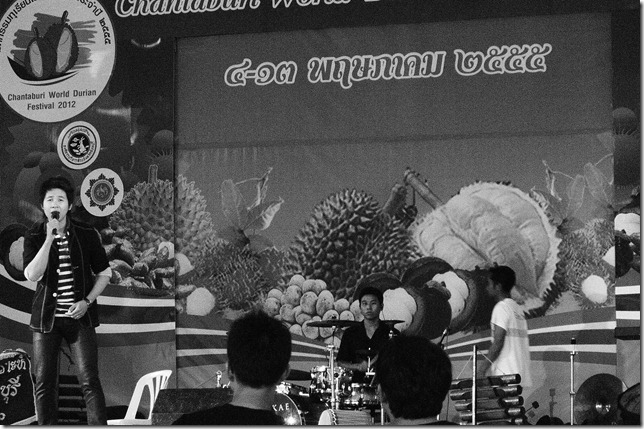 And check the massive inflatable namesake off the side of the stage. 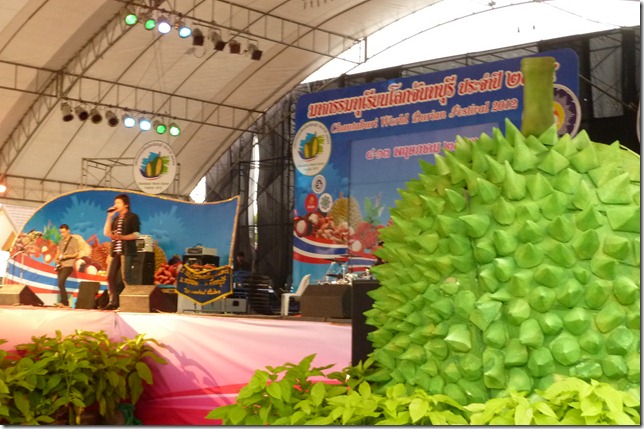 Yesterday, Friday, I signed up the Durian-Eating Contest. They told me it’d begin at about 5:00; but at about 5:00, it was instead some ceremony, or dedication, or such-like. 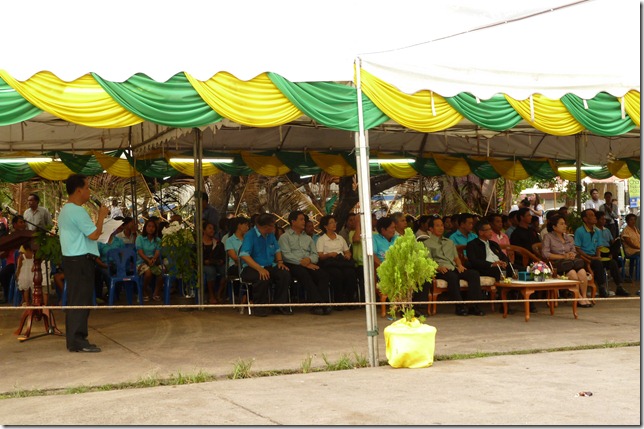 Here’re the Door Prizes. Chanthaburi may be the King Of Weird, but this is actually pretty par for the course as Thailand goes. 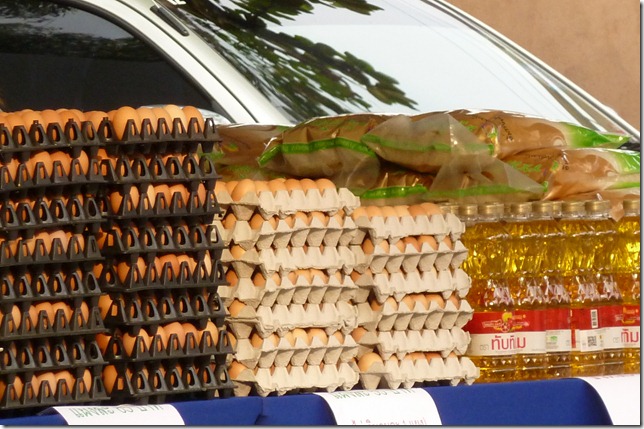 Finally, it was time to throw down. Here are a few of my competitors. 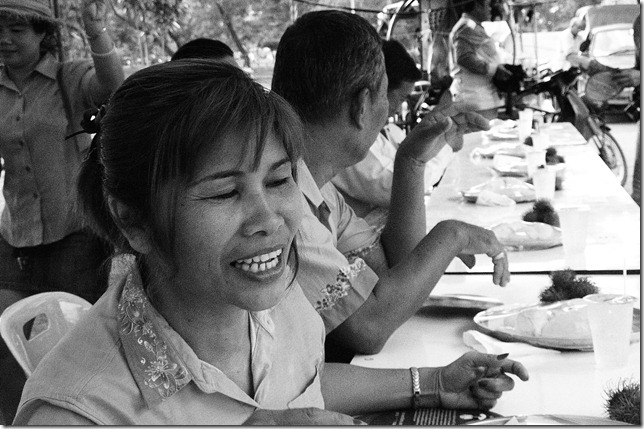 And the small but enthusiastic audience. 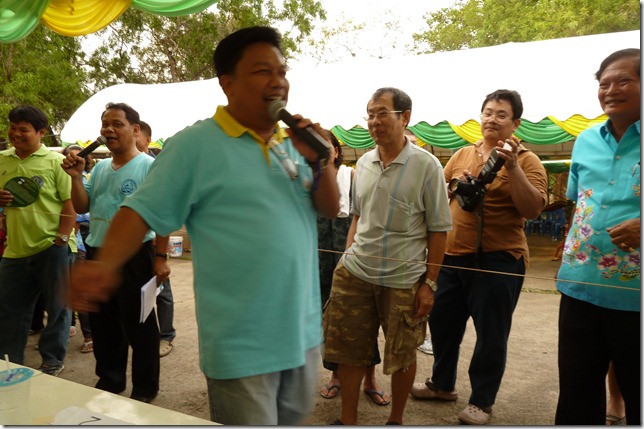 It looked I’d be the only farang to participate; but at the last minute, this Aussie gentleman joined up. 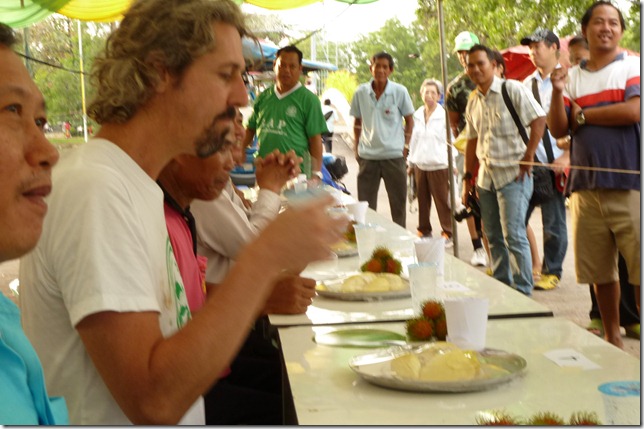 Despite its name, the contest’s rules required the participant to, before digging in to the Durian, eat all of those fucking Rambutans first. Such contemptible bullshit! But being a guest, I didn’t want to rock the boat. In this clip, I on two occasions clarify that all of the fucking Rambutans must be eaten first.

My intention had been to just leave the camera running straight on through the contest; but audience-members kept grabbing it and taking pictures of me with it. Weirdos! But I’m glad they did; ‘cause they came up with some pretty cool shots. 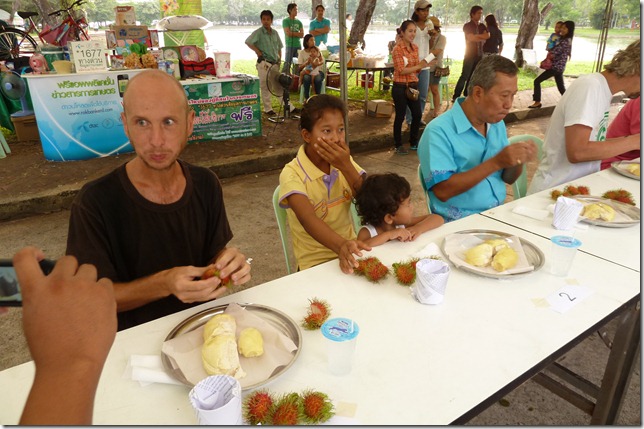 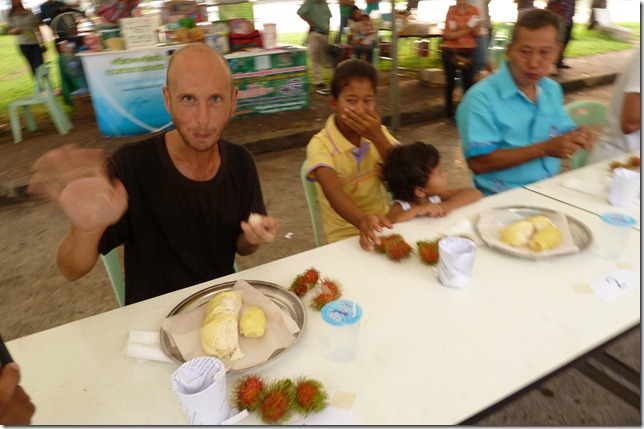 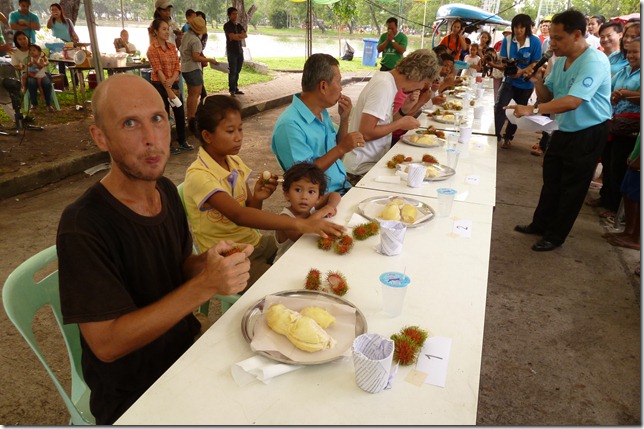 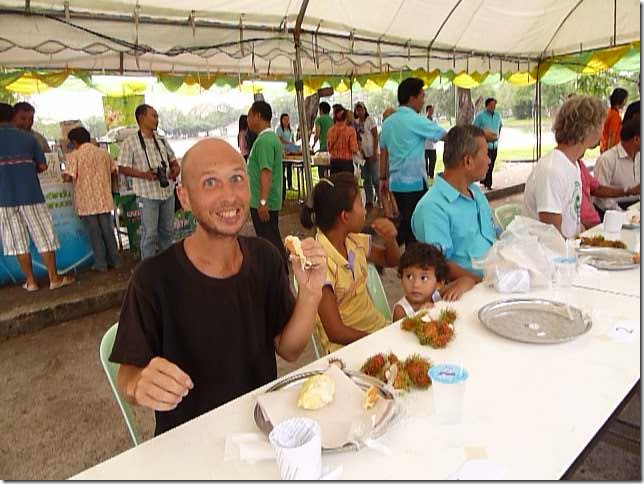 But at last I did manage to record most of  the contest proper.

Ha! You see that shit? The ending-whistle blown even before I was able to get in my first bite of Durian. Fucking Rambutans! Although, it doesn’t appear to me that I’m getting them into my mouth so much more slowly that the competition – I think most peeps must’ve gulped ‘em down with minimal chewing: not conducive to digestion, yo!

In case you’re wondering why I kept eating after they’d already blewn the whistle. It’s ’cause I hadn’t realised they were gonna come around and weight everybody’s Durian (to determine the champeen). I just figured that somebody had already finished his or her Durian off and thereby won the title; and that I was therefore free to go ahead and eat mine up. Everybody else got their remains packaged up to take home, and then just split. So I was left there by my lonesome, eating the Durian —  much to the audience’s delight.

The Grand Prize was a potted Durian tree, but all participants received one of these bunny-cups… 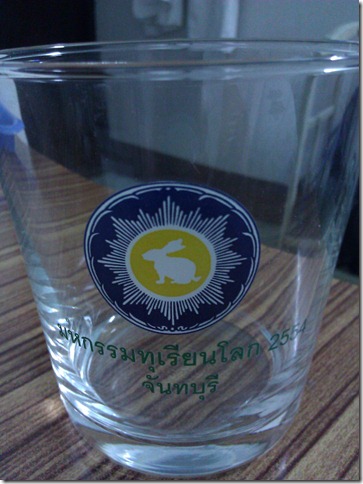 …wrapped in this. I like how it’s now the “amazing” World Durian Festival. 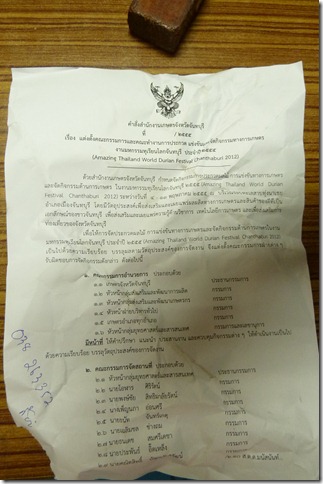 In other news-about-town, so many people here have poodles! Not only this, but they take the poodles out with them where’er they go. Seems like every fourth or fifth motorcycle has got a poodle riding along. 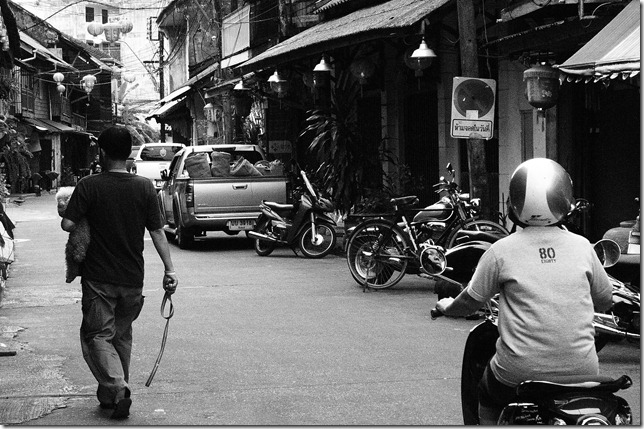 From the Weird-‘n’-Wacky Signs Dept., you’ve gotta be in love with this dude. 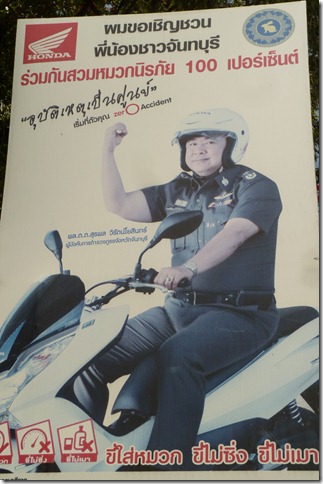 For more bunny-love, here’s the City Arch (most medium-sized cities in Thailand have an arch on the main drag, at the city limits). 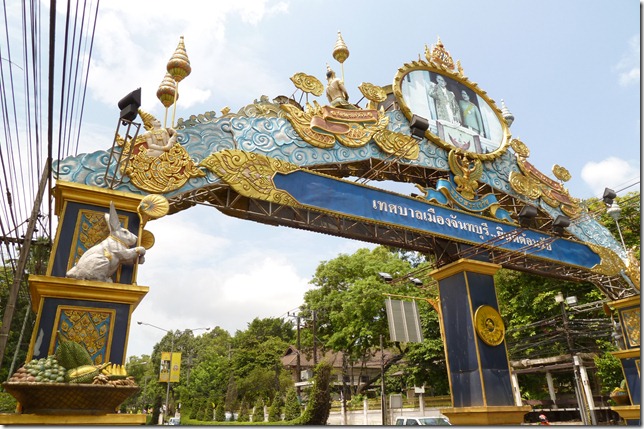 At the festival, watching one of the musical acts, this gentleman turned up to watch as well. He’s the second – second – gentleman I’ve seen here carrying around a women’s purse. One, you could say, well, probably some kind of Charles Manson character (or what). But two? It’s officially a town craze. 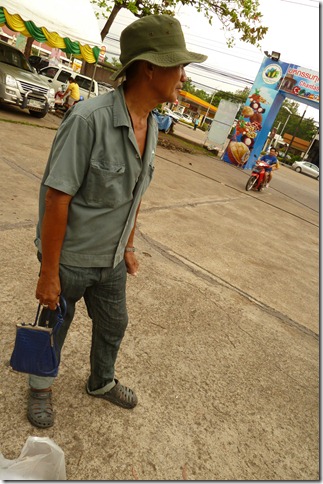 He later asked me from whence I’d come; when I told him from whence, he began jumping around like a maniac, huge smile on his face…and then performed a pantomime of a soldier firing off his rifle. Goofnut. (Yes, yes: I’m all too aware that the locals consider me — barefoot farang schlepping enormous quantities of Durian hither and yon — to be the goofnut. I can even hear them laughing about me after our brief encounters.)

No evening complete without a stroll through the Market. 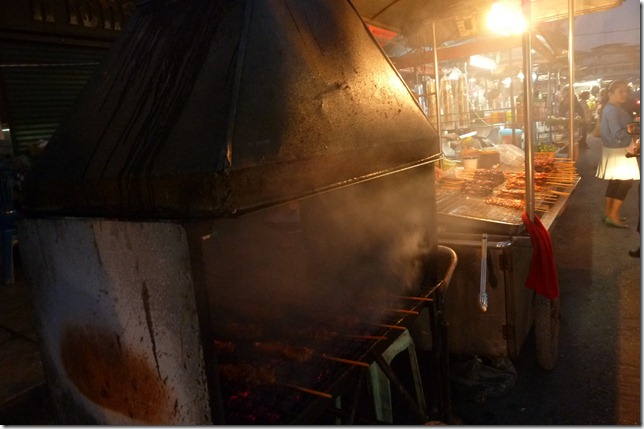 Finally, here as everywhere, old ladies love to feed the animals. The catch is that here, they just look a little bit more wackier in doing so. 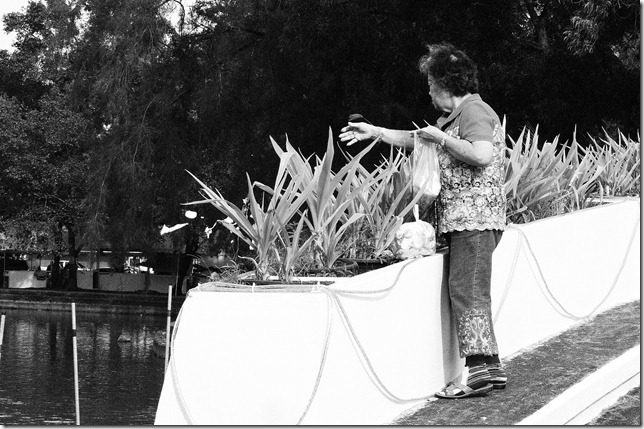 A strange and wonderful town!

And speaking of strange and wonderful, recent search terms by which people landed at this blog:

3 Responses to Durianism: The Dark Side