You’re a monk of a certain age. You’ve attained a level of respect. You’re entitled to travel in style, you’re… 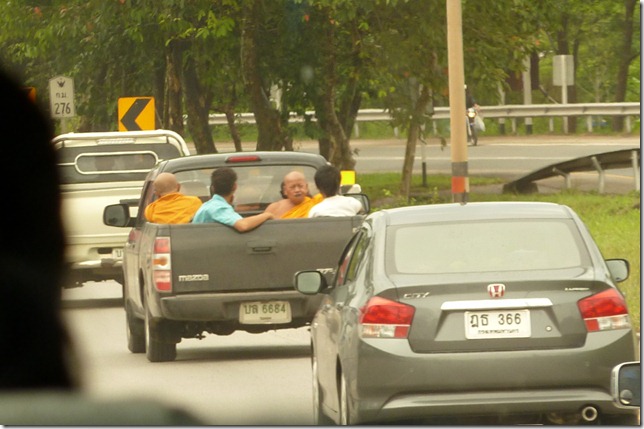 The weather here in Chanthaburi can’t seem to make up its mind. Partly sunny, mostly cloudy, spitting rain, torrential downpour: these are all, at any given moment, in play. But even when the latter, the Durian must get through!

It’s a welcome change after the searing heat of Siem Reap, Bangkok, and Vientiane. When the little breeze kicks in, it’s the absolutely heaven-sent atmospheric condition – much reminiscent of Hilo Town in this way.

I stepped off the bus, to be immediately greeted by the first of many a downpour to be experienced since my arrival. After waiting for it to settle to a dull roar, walked around a while, and found a charming little hotel right in the middle of town; then promptly et the best Durian of all my born days. Never got that one from the Festival, however; but rather from the huge, sprawling Fresh Market just a few blocks from the hotel.

That set the tone, all right.

The seat of Thailand’s Durian Empire, the province is also in abundance with Snake Fruit (first noticed these in Cambodia; but have not yet tried, as they’re rather pricey), Mangosteen (off the hook delicious, and ringing up at 50 cents to the pound!), and Rambutan. 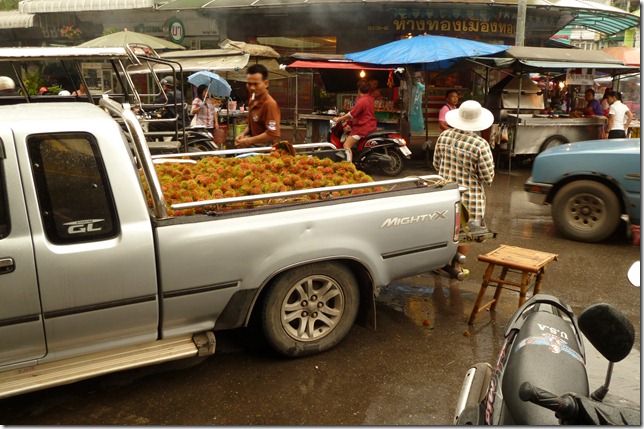 Despite it all, though, the number-one most-favourite delicacy appears  to be the same as it is throughout Thailand. 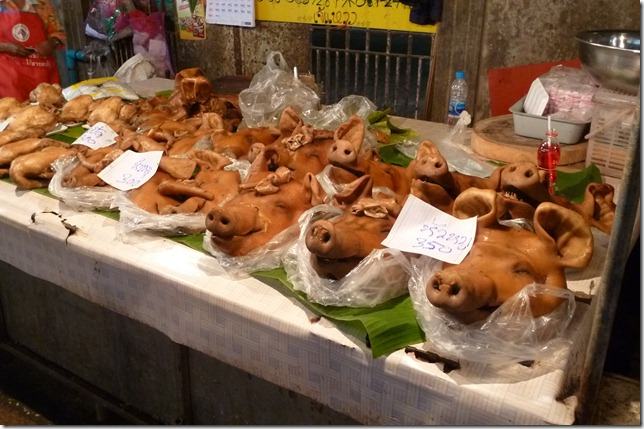 But, at least at World Durian Festival 2012, the in-season fruit reigns supreme. 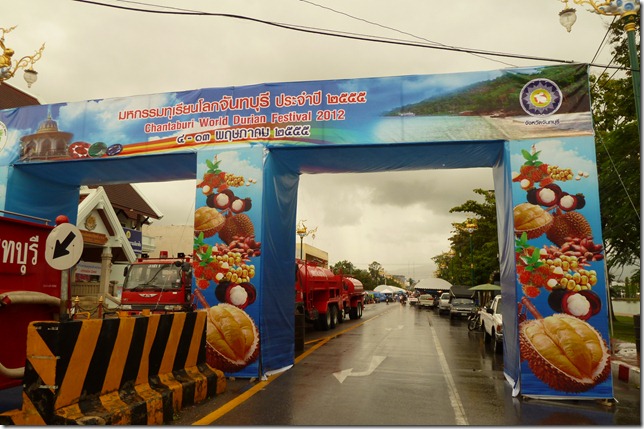 More vendors than one can shake a stick at, of course. But also a free Thai-fruit buffet, a Durian-eating contest, and lots of floats (literally floating in the lake). 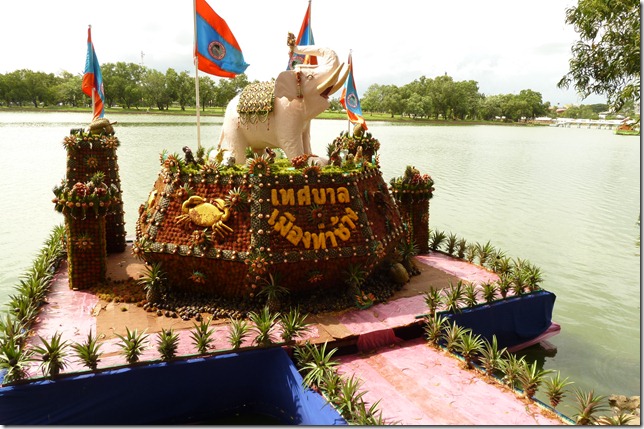 Now, why an elephant, or a frog, placed atop a bed of Rambutans? 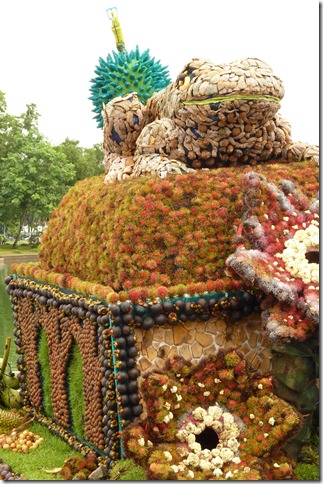 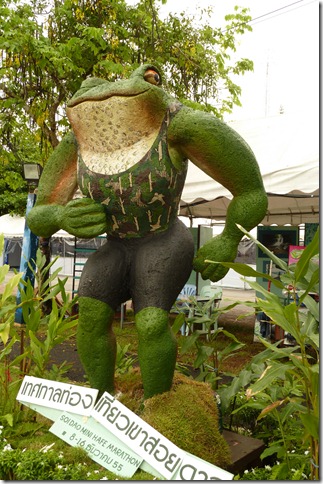 There’re also some music stages; the musicians here seem to be much more accomplished that their Nong Khai brethren. 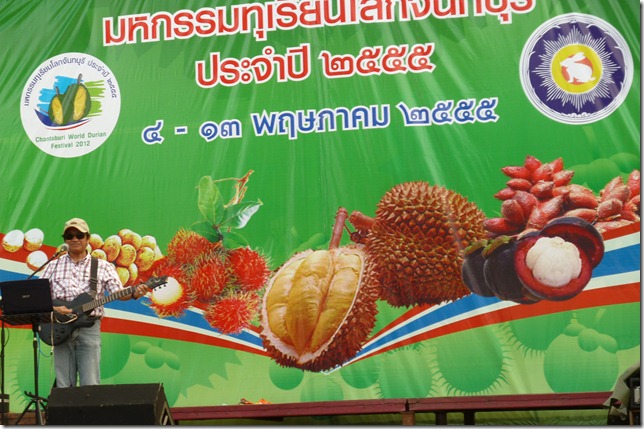 Here are the prize-winning fruits. 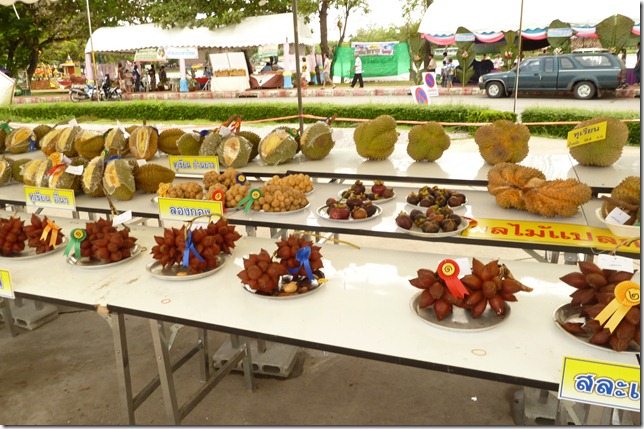 And check this enormous jakfruit. 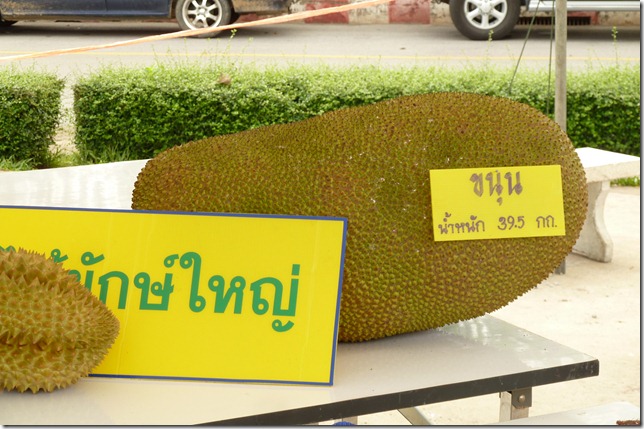 If all the fruit madness weren’t enough, Chanthaburi is some kind of global transshipment hub for rubies and sapphires and stuff; so the town’s loaded with shoppes selling and buying same.

On top of all this, there’s something about bunny-rabbits. See one of the helpful town direction signs. 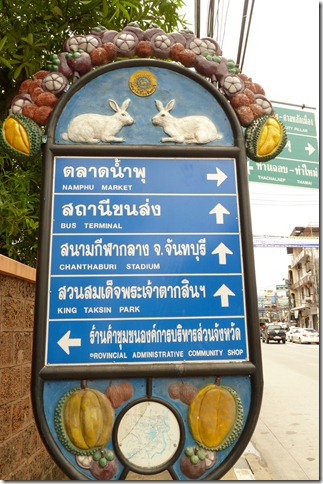 In addition, all of the streetlamps are adorned thus: 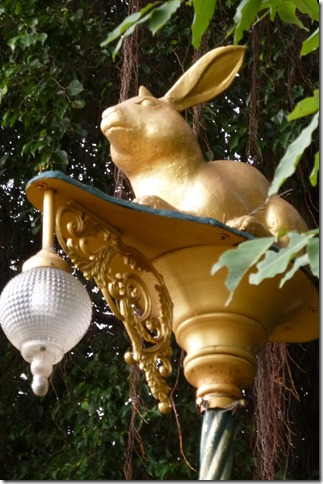 So, a town with a lot going for it; so one would think. But in point of fact, it’s absolutely no aspirations whatever at attracting tourists. The people are just the people, the town just the town; and any sign of a caucasoidal visitor is almost like as good as a alien from Mars.

A good place to experience genuine Thai culture – but the would-be anthropological visitor soon discovers that while he’s watching them, they’re watching him as well!

But they folk’re damned friendly, they are. Why, just yesterday, a couple drove up on a motorcycle and handed me a bag of Rambutans. A fortuitous event, as, though I cared for them not in Hawaii, I’d been wanting to try some here.

…And now I remember why they’re suck-ass. It’s ‘cause the damned skin of the seed adheres to the flesh, so’s one cannot but eat this frickin’ skin when chowing down the fruit. Bleah. Besides, its flavour is a very pale imitation to the almighty Lychee.

After struggling with a few, I purposed to just re-gift them. This was easier said then done, however. Tried giving these things away all over fucking town, and nobody would take them! Sheesh. Finally, the receptionist here at the hotel was happy to have them. He started munching away quite immediately.

Even the free Durian samples have been forthcoming – from vendors and civilians alike.

Well, one thing I did do yesterday was to help some dudes unload a beverage delivery. So, possibly, word got ‘round that there’s a Barefoot Farang in town helping out with the manual labour. Maybe that’s because why I later was being gifted with Durian and Rambutan alike? Probably, though, it’s just ‘cause the people here are just genuinely very friendly.

I did receive some pretty funny “advice”, whilst down by the river lunching a huge quantity of Mongosteens. A fisherman stopped by to shoot the shit for a little while; assuming that I would soon be on my way to one of the islands.

I corrected him that I’m here in town for the Festival. It at first didn’t register, but when I added “Durian”, he became quite animated indeed, warning me not to eat any more. See, ‘cause if one mixes Durian with whiskey (or so he says), it’s curtains. And, “You don’t need to die.” Huhn, the possibility of abstaining from whiskey rather than from the King Of Fruits had apparently not crossed his mind.

Anyhow, it’s presumably the absence of any touristic pretensions which gives the town its charm. I’d say, “I love this place – except for the goddam traffic.” But here, the goddam traffic seems to be essential to the people’s beings.

I mean to say, that while motorcycles are inescapably annoyingly numerous throughout Asia; here in Chanthaburi, it’s as though they’re not just a tool to get from place to place, but instead a very extension of one’s self. As if, were a townsperson to be separated from his or her bike for more than a few moments’ time, certain death would swiftly ensue.

Can’t put my finger on it; it’s just the feeling I get. At any rate, there’s something just a little bit off, just a little bit goofily weird – even by Thai standards – about the people here. Quite endearingly so, let me hasten to ad.

One can see it in the signs and advertisements, for one. 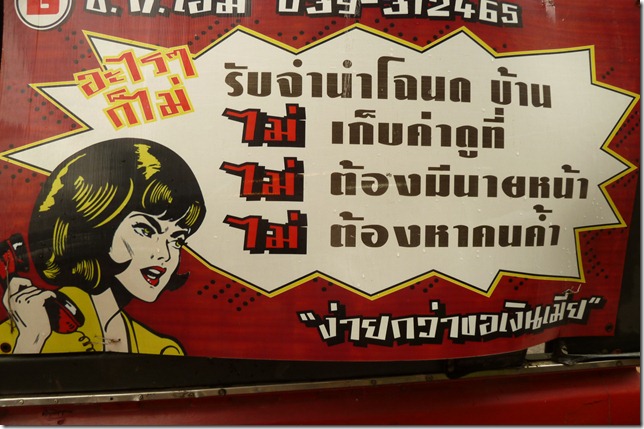 I like how the raindrop makes it look like she’s a solitary tear running down her face; but even without, don’t you wonder just what’s going on in that phone conversation? 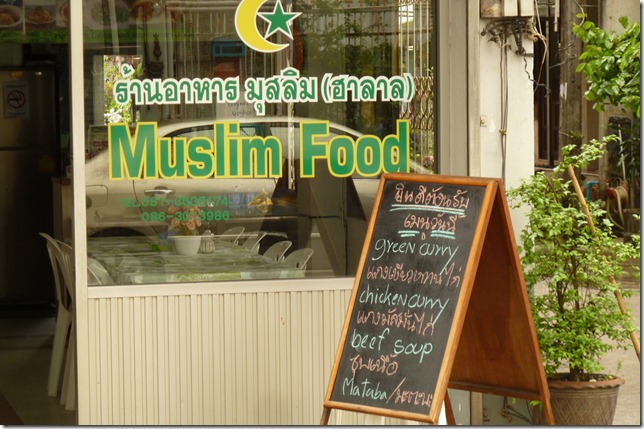 I’ve never before heard tell of “Muslim Food”. Probably it means Halal, I guess. Meanwhile, one can’t but hope that this won’t be on the quiz. 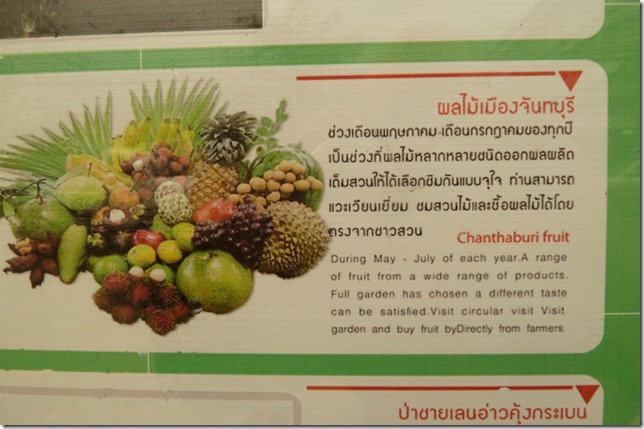 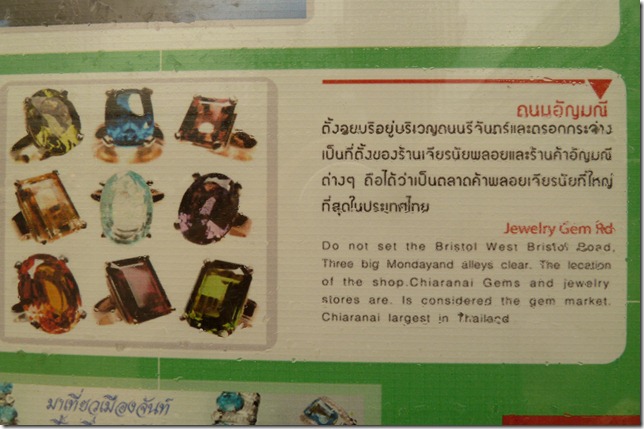 As far as this goes…well, what can one say? 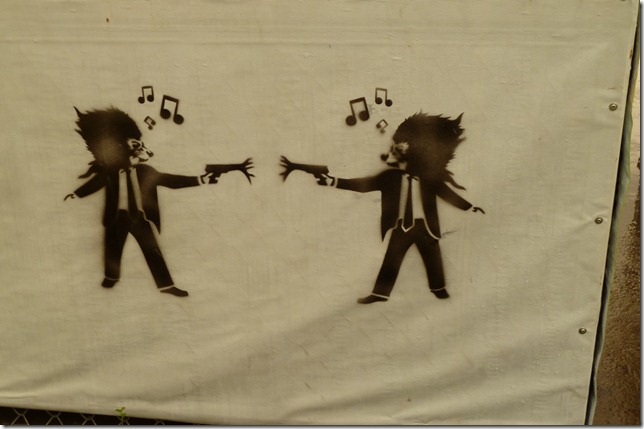 But, now, see if you don’t agree that the people here are wonderfully wacky; some kind of a breed apart. 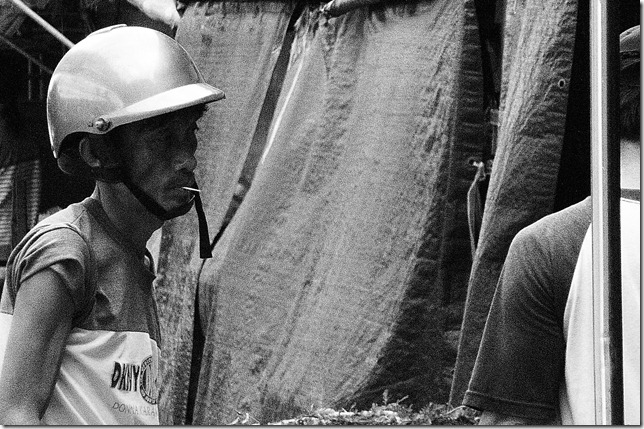 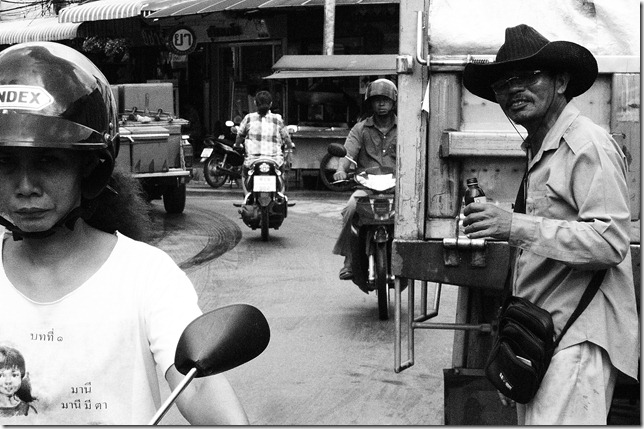 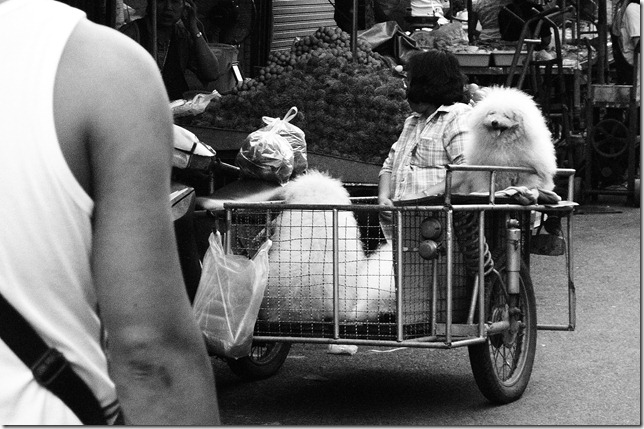 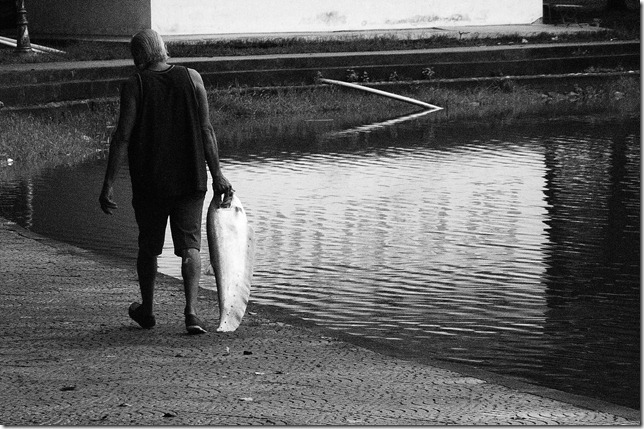 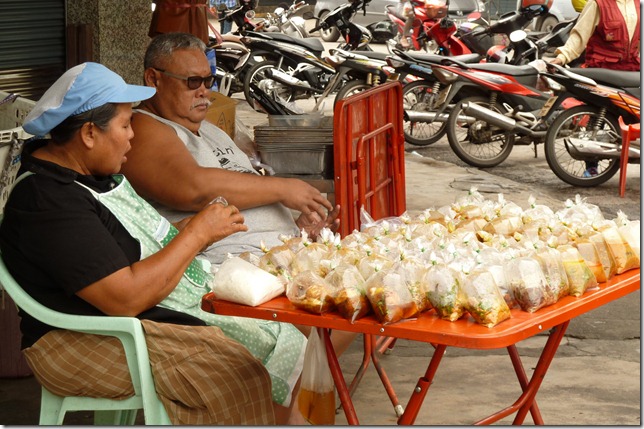 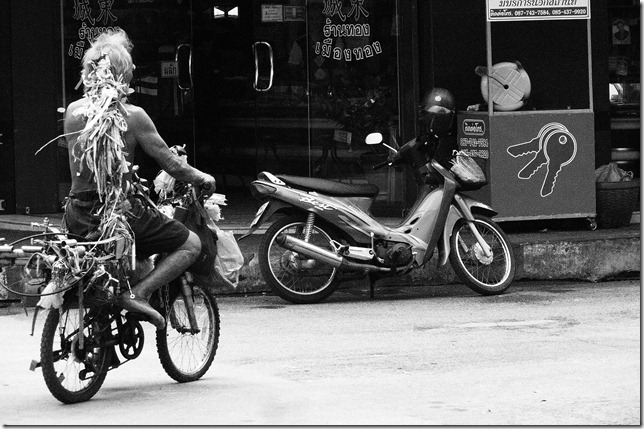 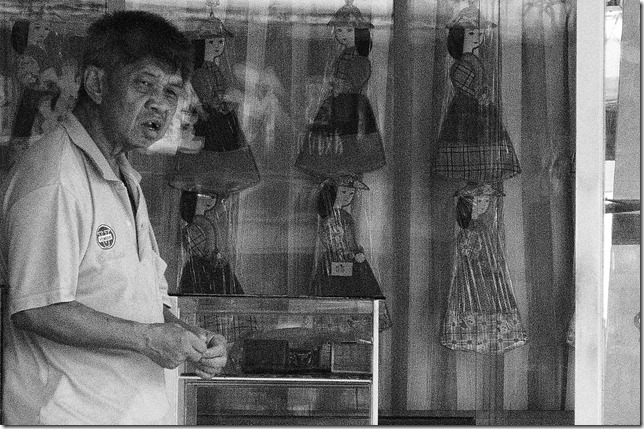