Felt much better Sunday, but still very tired; so decided to take another day of resting. The good part was that my dormmates were very cool.

On Saturday, it was just myself and a fascinating Italianess name of “Roberta”. Aged mid- to late-twenties, at a guess, she’s hitchhiked her way throughout more less every continent. She said that locals in Thailand were begging and pleading with her not to do, saying it was far too dangerous — but she found it not to be so.

The only dicey place, she’s found, for hitchhiking is in South America, where she got robbed, including her passport was stolen — but no way would she let that stop her from her (it seemed to me) somewhat maniacal cause.

Here in Laos, the locals told her that it would be impossible; but she’s begged to differ. She arrived to Luang Prabang in with a Korean expat living in Vientiane, heading here for a little holiday with a Korean friend of his unseen by him in the last four years.

They’d apparently brought their own little camp-stove with them; and at one point, the three of them pulled over and asked a family if they could use their outdoor table. She said that the family considered them absolutely crazy: two Koreans with very poor English skillz, and an Italian, cooking up Korean dishes with the camp-stove, right there on the lawn.

They did the same at their hotel, inviting her along both nights they were here.

She’s also a bit of an exotic-cuisine fanatic, having sampled anything and everything she could find — including dog here in Laos. Which, it’s illegal to be eaten here, so they had to go way out in the sticks to some bootlegging operation which serves it. Only time she’s really gotten sick was from some Mexican iguana she’d eaten.

Also scored many points with me for not having drunk the Obama Kool-Aid. She figured that he was maybe a teeny bit better than Bush; but I assured her that they were exactly the same — no difference whatever.

I told her she should write a book; then tried to convince her to take the slow-boat up to Nong Khiaw, but I think she went ahead and went back down to Vientiane with the Koreans.

Sunday eve, a buncha Europeans arrived from the two-day Huoay Xai slow-boat. In our dorm was a Portugese girl, a German, and a Frenchman. They’re all very cool and interesting as well.

In other guest-house news, wish this sign were more assertive; as I done, on two or three different occasions, bumped my head (real good one) exiting the pisser. 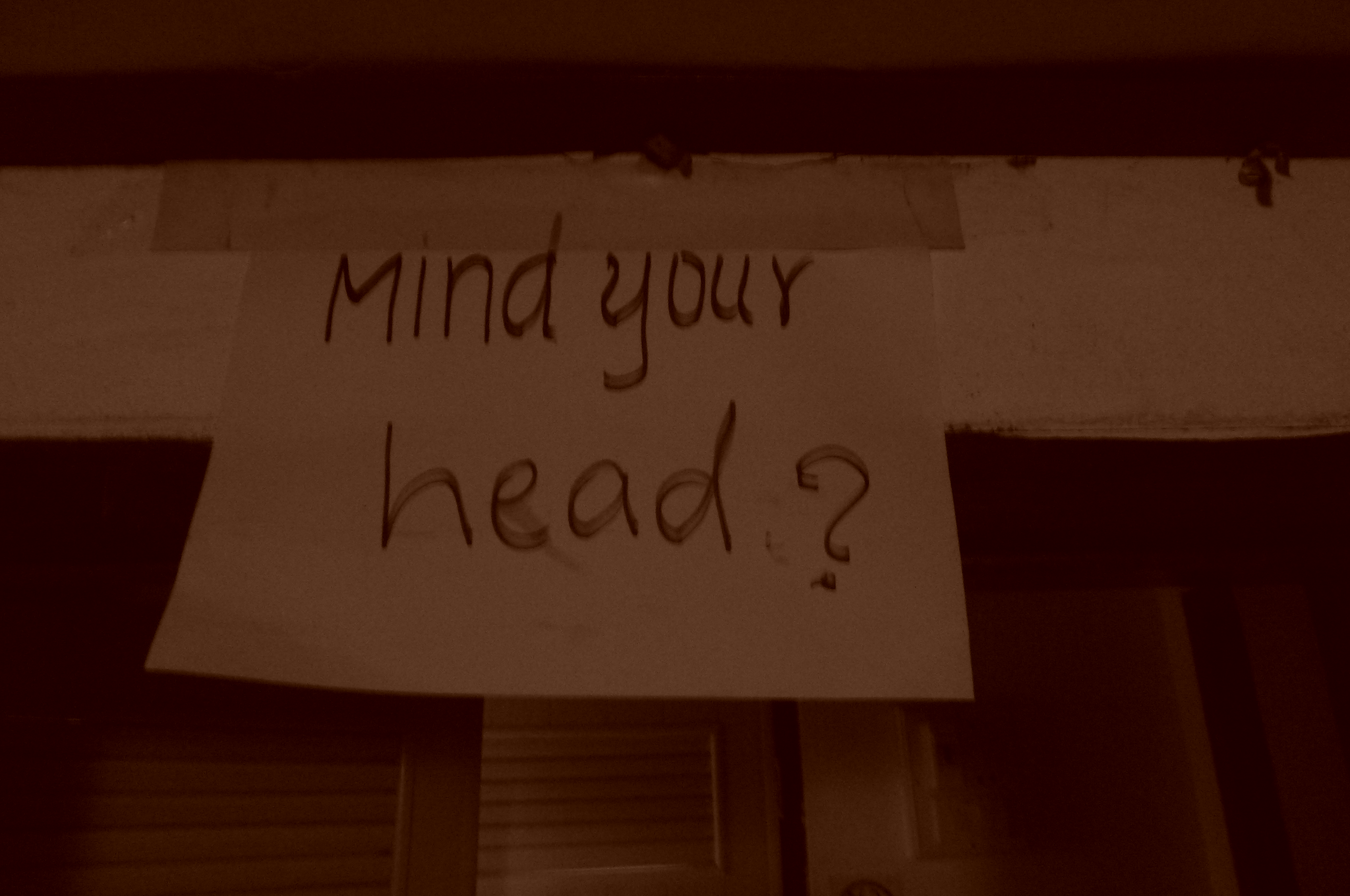 So, this morning, Monday, I was feeling quite good, and decided to head into town. Now… …what possessed this gentleman to bring his fricking crossbow to the Morning Market? Does he use it as an aid in the haggling? Is he some manner of city-wide vigilante, taking a little snack-break? Don’t know. But I do know this: I was not gonna fuck with him.

Broke my sixty hours’ fasting with a nice, juicy watermelon. While doing, managed to photograph a butterfly. I feel for those who take up butterfly photography as a hobby, as it seems to me deuce difficult. Photo is lame, but it’s a first. After walking around some, began to feel very tired again. So, took a bit of a rest, before heading to visit the National Museum. On whose grounds sits the Buddha-less temple I love so much. So I first went in there again and soaked up the goodness.

On the way out, an European couple requested that I took their picture. After doing, the gentleman asked if he could return the favour? Okay…why not? The Museum knocked me on my ass, then stomped my throat in ’til almost my very last breath. Alas… …no photos. Just gotta trust me when I say that’s it’s a must-visit if ever you pass through.

Later on, visiting a temple I’d not yet been into, was engaged in a conversation by a seventeen-year-old novice name of “Bounlanth”. He’s from Bokeo province, which is about a fourteen-hour bus ride from here. Has not seen his parents since arriving about a year ago, but thinks he may next year. I think he’s the best English-speaker yet; hardly any accent at all, too.

Says that life at the temple is very difficult, as the novices are required to do an assload of chores; not to mention gots to arise at 4:00 in the AM for the morning meditation session.

Nearing evening, and still quite tired, decided to sit and watch the bicyclists. The two most absolutely essential accessories in Luang Prabang are the bicycle and the umbrella (maybe better termed a “sunbrella”). Very often, the twain doth meet. 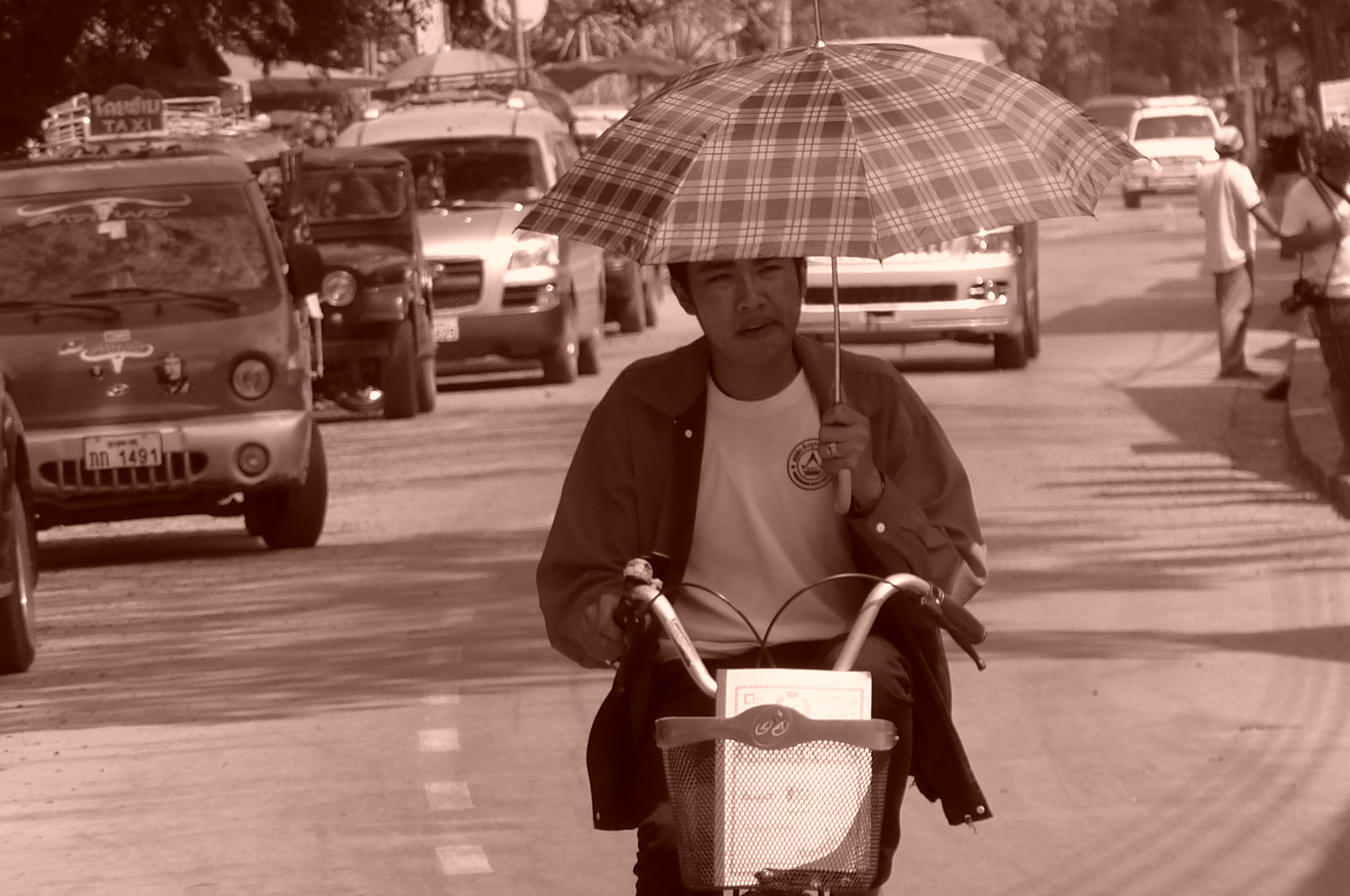 It’s great fun to watch the cyclists, ’cause the bicycles here are like snowflakes: never see two of like design. (Odd, seems to me, given how many of them are rentals.) Best of all, cycle and rider are quite frequently ridiculously incongruous — especially good is the big dudes riding kids’ bikes for which they’re about four sizes too large.

Difficult to get a photo of this phenomenon, for some reason. A bit like hunting for Snuffleupagus, in fact: one may sit without luck, camera poised, for hours on end; then as soon as the camera goes into the pocket, twenty-five in a row ride by. Did finally manage to get something approaching half-way decent (though the rider-to-bike ratio here is not as large as is often seen). This tuk-tuk driver perked right up when I stopped near him, thinking he’d reeled in a fare. I only wanted a picture of him and his bare feet, though. If ever I see him again, must be sure let him know that it turned out really great. Thanks Buddha there’s at least one restaurant in this world which helpfully illustrates, for those mystified as to what might possibly be included in such an exotically-named dish, what it’s all about. This lady is setting up her Night Market stall. I had earlier seen her having some difficulty in pushing the cart up an incline, and was about to offer my assistance (depleted though I’d felt); but she bore down and sealed the deal all by herself. And speaking of four sizes too large, check this guy’s suit of clothes. 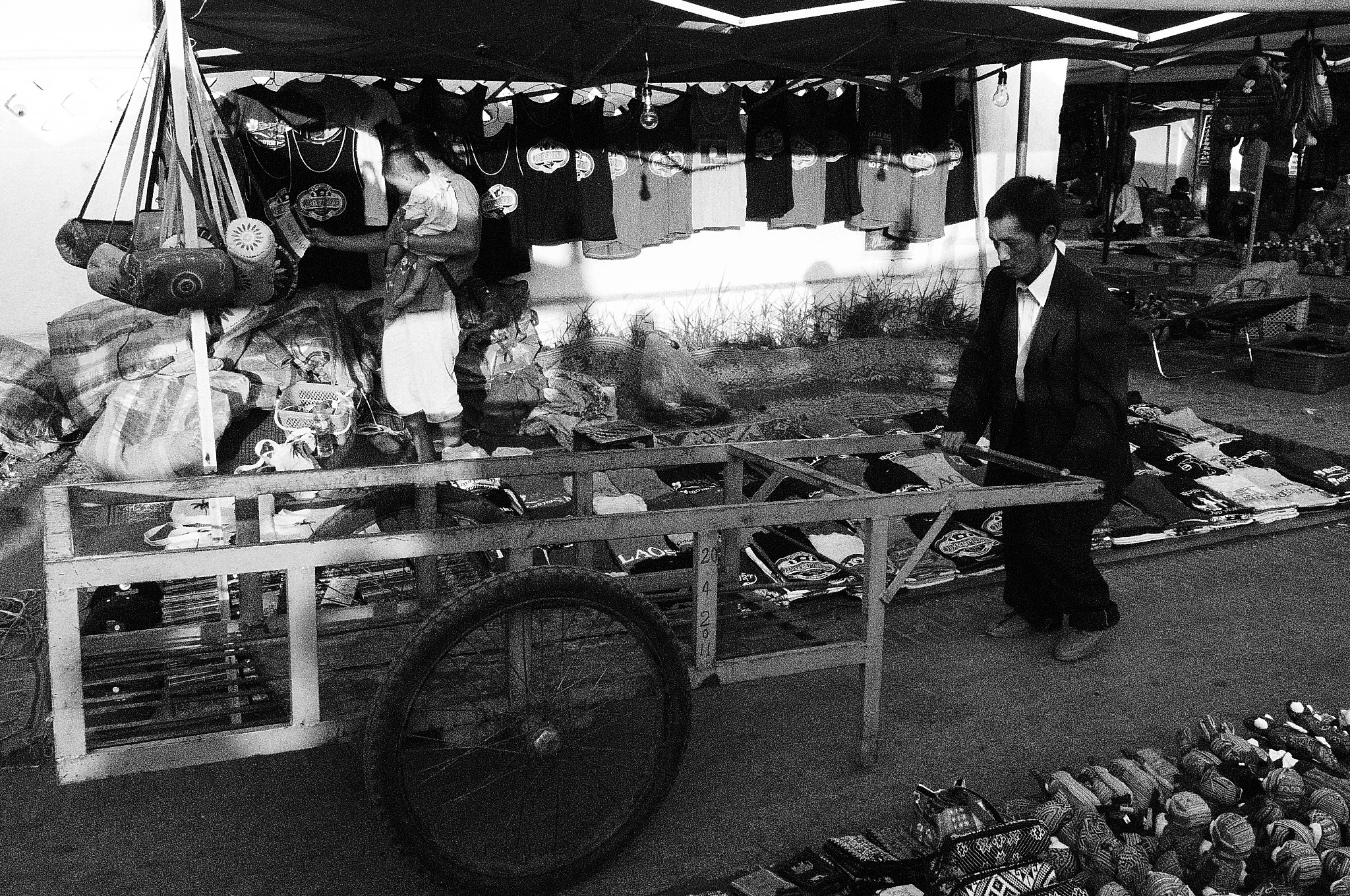 Whoa, 6,000 Kip for these adorable loaves? I’m sure you can recall how batshit-insane I used to be for the Banana Bread… Speaking of batshit-insane, though not in a good way: the greatest annoyance in Laos (if not the European smokers — though I must confess that they’re generally very nice folk) is these god damned shoes many of the toddlers wear. They loudly squeak with every footfall; making me want to catch a rocket-ship to the moon, that I might escape the nuisance.

Lastly, I do believe that that’s just what the Hebrews thought: Hopefully back at full strength tomorrow!