Up early to-day to hike it out to the Arcade Bus Terminal, and thence to ride to Chiang Khong. Have not been an early riser in Thailand — for some reason, I can’t get to sleep until midnight or so…and then I sleep like a rock.

So I did get to see something new. In the early morning, the monks walk around carrying these little metal pots, which people will drop food into and kneel down as the monks recite some blessings for them.

We got started about a half-hour later that the scheduled time, as a lady in a blue shirt had to come on and refund everbody 61 Baht, owing to the absence of a shitter in the coach. Hey, no complaints from me waiting an extra half-hour to receive a 20% discount!

The bus-ride was assigned seating; and being that I’d reserved early, had me a front-row seat. A capital view available out either side window, as well as the windshield. Also, I was close to the singing driver, and the conductor seated in her weird little jumper right by the door. 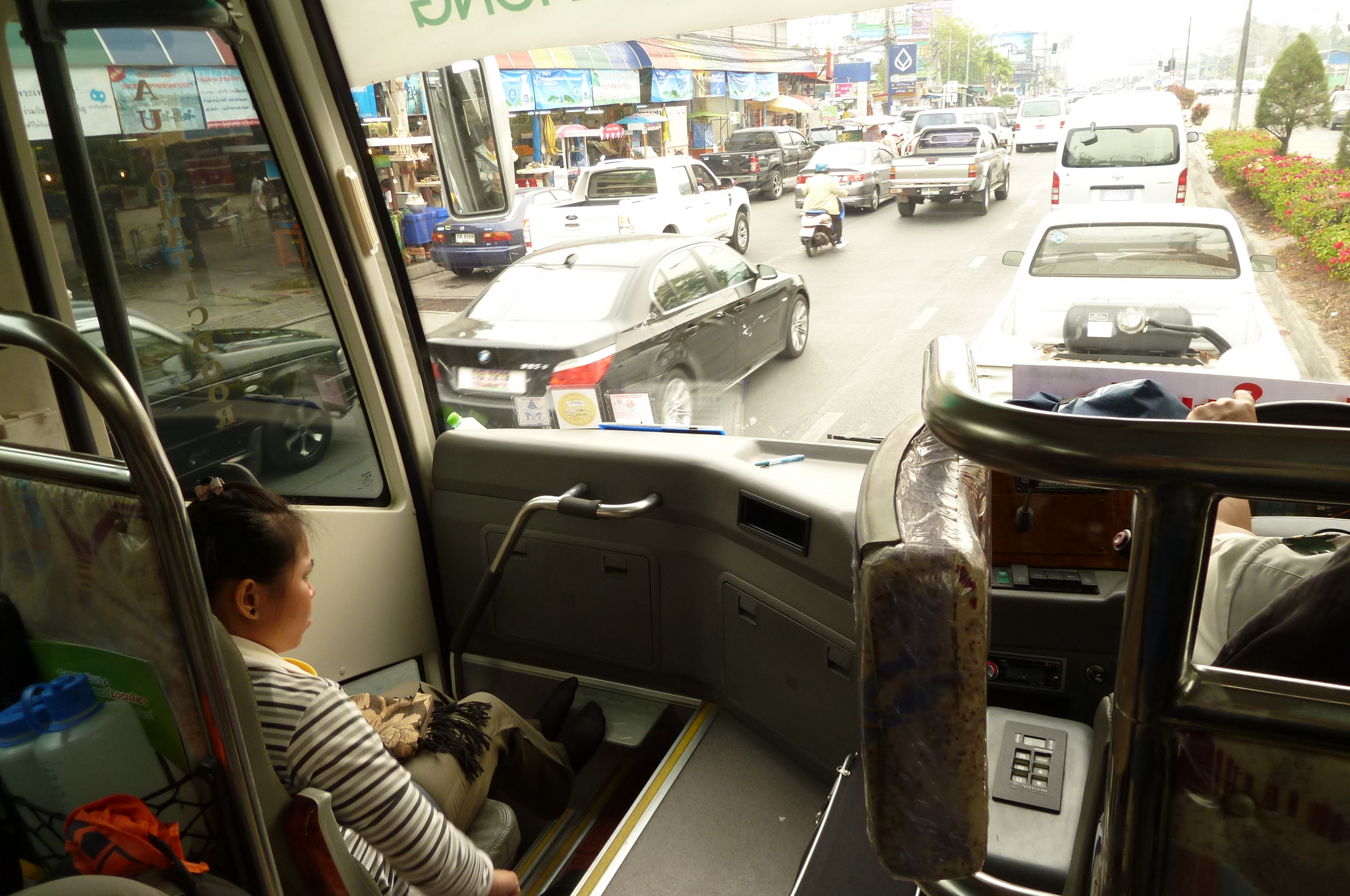 She was fascinating to watch, in fact; as in one moment she looked as though she held every one and every thing in the utmost contempt, but in the next looked like the happiest camper in all the wilderness. Here’s a typical moment or three.

Two Filipina sisters across the aisle were keeping me entertained with their running trip commentary. They’ve lived in L.A. for thirty-seven years. Mary Kelly, the instigator of the two, has not eaten Durian in thirty years; but I think I’ve convinced her that it’s time for her to take up its cause once more.

The scenery was pretty wonderful, in through the mountains and rice paddies; as well as small towns. A particular highlight was an old lady riding her bicycle down the middle of the road doing about three miles per hour, refusing to even budge at the driver’s honking. It was almost as though she were trying to re-create Tiananmen Square. Too funny!

We stopped off for lunch in Phayao, and I took a walk down to the lakeside park where the fishermen were doing their business. 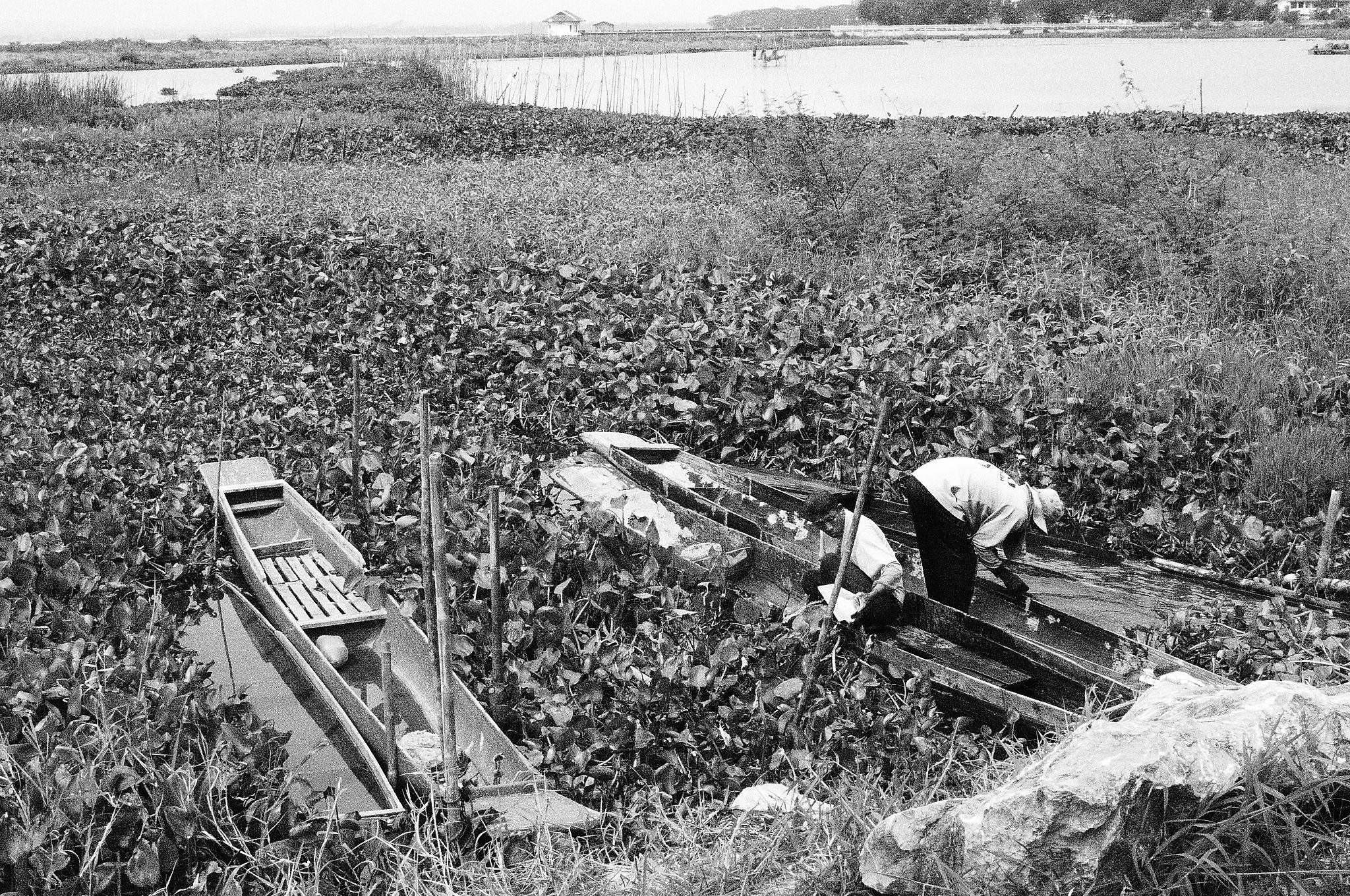 Pretty nice park, though this pier has seen better days. The hay-farmers were out doing their business as well. Arriving in town, there was supposed to have been a green sign at the 7-Eleven, giving directions to the guest house. The sign was nowhere to be found, and asking locals (some of whom spoke excellent English) once again elicited contradicting opinions concerning its whereabouts. Finally, I just gave up and flagged down a tuk-tuk.

The guest house is a lovely little establishment run by a Thai woman and an Alabaman gentleman (with the accent to prove it). Overlooking the Mekong, it’s a serene and welcoming environment. 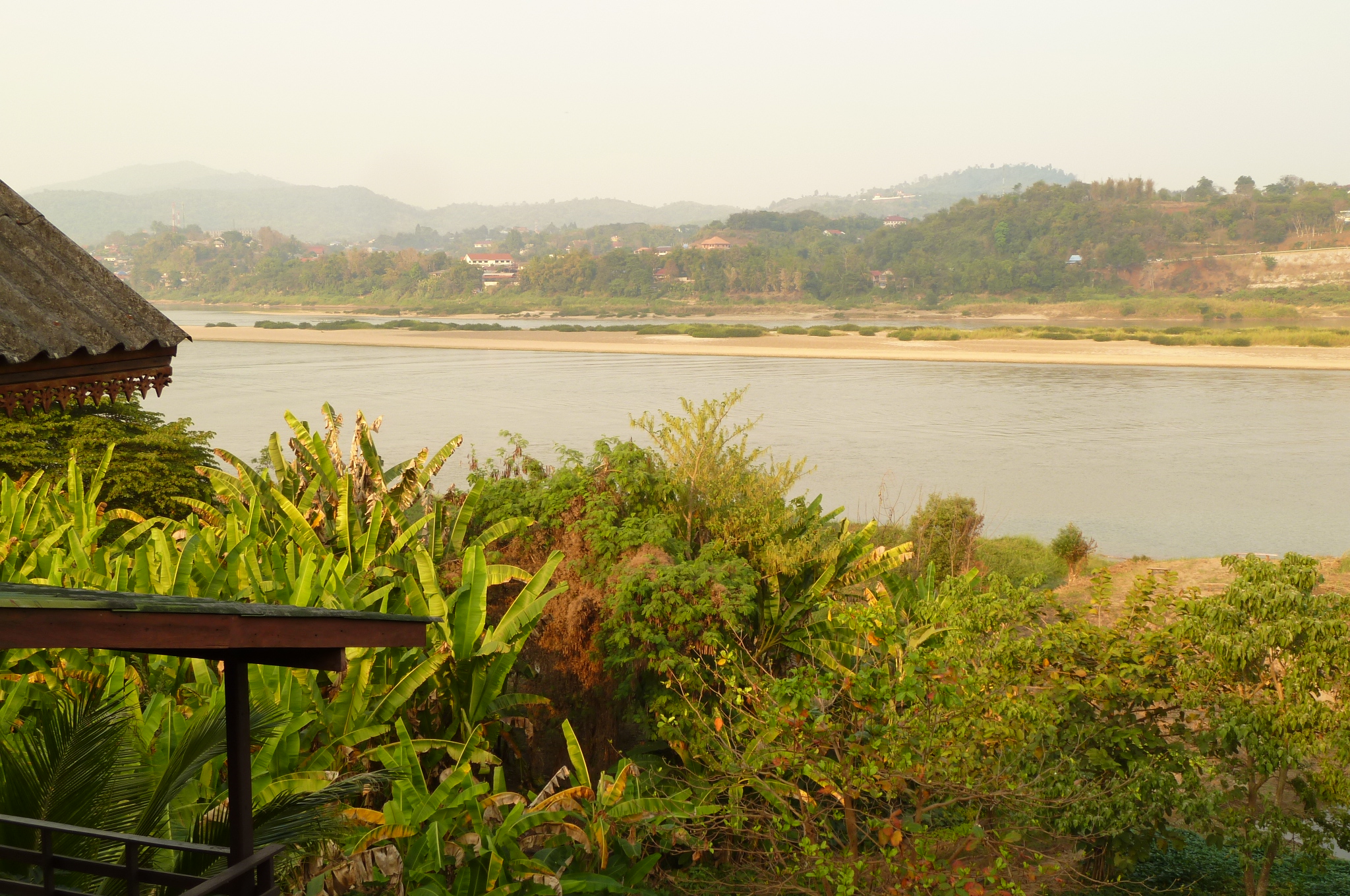 The system is, one pays as one leaves at the conclusion of his or her stay. During the stay, you’re to keep track of your own expenses in the provided ledger book. So, mark down your room fee. If you order an item from the restaurant’s menu, write that down. Ditto when you grab a beverage from the stocked cooler. Then when you leave, tot it all up, and pay the bill.

After checking in, I went over to the market and purchased a watermelon — my first eats of the day — to take down to the park and eat up while watching the sunset. During my dinner, a gentleman came up and introduced himself as a police officer. For a bit, I thought I was gonna get busted for spitting my watermelon seeds onto the brick walking path. But instead he just asked me a bunch of questions about my travels, and my home and occupation and whatnot.

He then introduced me to some kids garbed up in boy-scout uniforms, telling me that he was their running coach. Also, he’s going to at some point be working at the airport in Bangkok. Don’t know whether he really was a cop, and was just trying to make sure everything was on the up and up with the gringo in the park; or if I misunderstood him on that point.

In the end, he told me to enjoy my stay in Thailand, and I thanked him muchly.

After a walk up and down the town’s main drag, I stopped in at a produce vendor’s. German dude who’s also staying at the guest house offered to give me a ride back on his motorcycle. I told him I preferred to walk, and he scoffed, “Without shoes? You can’t walk without shoes!” Then he roared away.

Arriving back to the guest house, all the upstairs seating was filled with diners, so I went downstairs to enjoy some bananas at a little patio table. The German dude was down there drinking beer. I asked him how the mosquitoes are here at night-time, and he showed me his “barbecue”, explaining that it was a trick he’d been taught in the jungle in India — “You know, in Indiana” — and that it would keep the mosquitoes away.

He’d just got it lit, and the coals weren’t hot enough, so, “Right now, it is schtinking,” but soon enough it would be all good, and no mosquitoes. He offered to let me barbecue my bananas: “Up to you,” said he.

After a bit, the proprietress walked by and said Hello; prompting the German to warily inform her that “the black” (i.e., charcoal) had not yet heated up properly, but that in five minutes, the barbecue would no longer be schtinking.

After it had ceased schtinking, he asked me if I could feel the “energy” of the fire? I said that yes, I could. “This is no joke,” said he. “There is energy in this fire…and now you are safe from the mosquitoes.”

“Dankeschön!” I exalted, and he disappeared upstairs. No idea whether the jungle barbecue trick spiel was a crock of scheiße made up on the spot. But I do know this: I didn’t get bit by any mosquitoes down there! 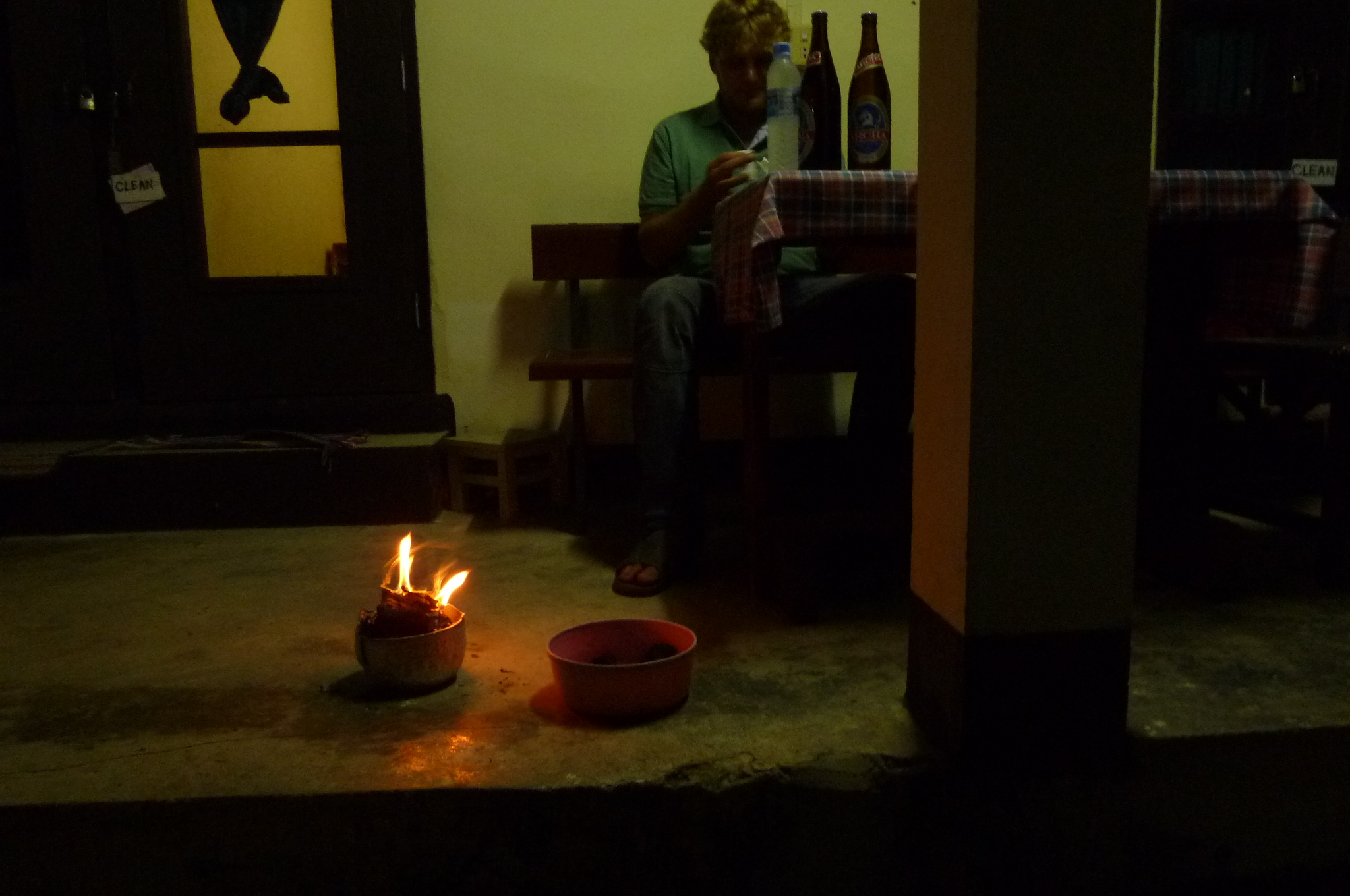