Another day spent boggling at the immensity of it all.

Busted a move up to Chatuchak Weekend market; it is, I suppose, the largest flea-market in the known universe. Unlike the street-vendor scene, though, it’s very well organised: 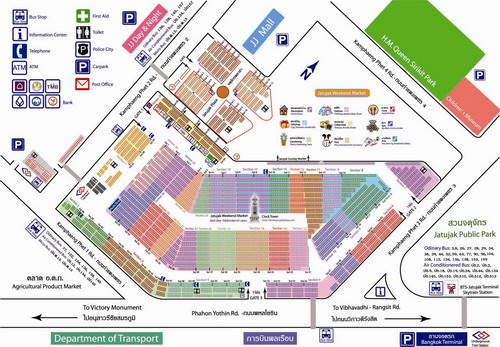 “There are almost everything can be found here,” boasts the website — and I’m not inclined to disagree!

Across the street is another daily Fresh Market, this one run by the ministry of agriculture. This market too is more-well organised, and much cleaner than its brethren; though of course the produce is more expensive. Many durian were on sale; but being out of season, they were quite expensive indeed.

A good time, perhaps, for a Fruit Report!

Mangoes. The thing with mangoes is, they’re so damned expensive that I rarely partake. On the mainland, they’re expensive and pasteurised. In Hawaii, they’re expensive but plentiful. They grew ’em at Onomea, but were out of season when I was there. Once in a while, we’d get some “rogue” fruits in, and everybody would stop what they were doing and pig out ’til the mangoes were all gone.

Here, they’re pretty expensive, too. But I thought I’d better oughta give ’em a try; and…my freakin’ god. Colour me incredulous that something could actually taste this good. Almost makes me believe in “Intelligent Design” (or what)!

Yes, I’ll say it: mangoes are more delicious than durian. Obligatory caveat that I may be singing a different tune once durian season rolls around.

Watermelon. The one I had was fine, though not as good as its deep red hue had suggested it would be. I’ll be trying more, for  sure.

Mangosteen. Considered the “Queen Of Fruit” (to durian’s king). In Hawaii, they’re eight bucks a pound; at this market, they were (trying to off-the-top convert kilos to pounds and Baht to Dollars here) about fifty cents a pound. They’re quite good here — not as good as Hawaii’s; but the price is damned nice!

Longans. Got some from a supermarket my first night here. They were good, but seemed a bit underripe. Again, Hawaii’s much more impressive — however, grade incomplete. Need to get some riper ones.

Papayas, pineapples, and jakfruit are in season, but I’ve yet to try. Tomorrow’s another day (but may just end up breaking the bank on more mangoes!)…

Hoofed it over to the river, and caught a river taxi back down to the Silom area, whereon I was yet again bowled over by the street-vendor potpourri, these ones catering to the tourists staying in the big river hotels. They’re everywhere! It’s crazy-insane; but certainly fascinating.

But get this: according to the guidebook, it’s Chinatown (wherein I’ve not yet set foot) which forms “the epicentre of Bangkok’s bustling commercial cult”. Truly, the mind does boggle. Will have to put this on the list of things to do — though probably not tomorrow, as all this shod walking’s killing my feet  (even wearing the Five Fingers).

Oh, speaking of which, it appears one way to ensure that locals will not approach you (apart from the Patpong pimps, that is) is to refrain from breaking any cultural taboos. To-day I toed the company line (pun intended, yo!), and the only locals who really gave me the time of day were some very nice folks offering to help me figure out the river taxi’s fare structure. Kinda liked it better the other way!

Back on topic, another long, surreal walk down Silom road — most of this section not having been trod before now — landed me again in Lumphini Park. Well, forget what I said before about nothing happening there: you just gotta know when to go, apparently.

And night-time, Lumphini is all about the aerobics, baby! At several different sites within the park, the locals gather to move their bodies to that crazy Bhangra beat (some sort of local Thai variant, I think)….and spectators line the path to watch like as though it were the Fourth O’ July parade. Why would they?

’cause it’s awesome! Guess you kinda have-to-be-there, as no explanation would possibly do it justice. So, here’s a video. It’s too dark to really see what’s going  on, but just try  not to laugh your ass off at the caller’s instructions.

Perhaps “amused” isn’t exactly the right word. “Enthused” might be better; maybe even “entranced”. Whatever, I coulda stayed there all the night long — alas, the mosquitoes came in and started harshing my buzz, so I had to take off. But will probably return! (Indeed, the symphony orchestra’s giving a free concert in the Park tomorrow evening. Can’t pass that up.)

This entry was posted in Culture, Fruit, Uncategorized. Bookmark the permalink.

1 Response to Dazed And Amused