Grazing On A Sunday Afternoon

Asked one of the hosteliers whether Bangkok is a fun city to be in during Chinese New Year. The ridiculously obvious nature of the query, it was immediately clear to me, shocked the faculties right on out of her; so that for some seconds she was incapable of anything save for a stupefied/terrified gaze like as though I’d just landed from Planet Moon and asked, “Which way to the cheeze?”

Finally, she returned to her senses, and assented that, yes, Bangkok is a fun city to be in during Chinese New Year. And so, I’ve extended my reservation for two more weeks — the New Year is on the 23rd.

That out of the way, it was back to Khlong Toei Market, where I thought I might get some papayas and longans, and perhaps a watermelon. Ended up with longans, all right — as well as bananas, and jakfruit, and cocos, and longkongs.

And…sapodillas! The very nice patron of the vendor from whom I purchased them said they’d be good to-day, but perfect tomorrow. Thanks god for English-speaking Thais; however, I must learn to ask, “Is it ripe?” in Thai. Had it not been for the white pineapple and the lychees, sapodillas would have been my favourite best fruit on the Big Island. Let’s hope the Thai variety can keep pace!

Later, sitting in the park, minding my own business and drinking my coconuts, I was joined by a grifter. A Laotian, he said, just in town as of last night, having left against the wishes of his father (whom, it so happens, was once bitten by a snake and had to have his finger amputated), because he (the grifter) was sick of being a rice farmer.

He was  sleeping at the train station, and being fed by some Buddhist monks. He wanted  to get a job in a Japanese restaurant, but couldn’t get a job until he had an address; and needed 500 Baht to pay half the first month’s rent to move in to the place he’d scoped out: a humble little shit-hole with no air-con and an outdoor toilet. But having secured an address, he’d be able to make eight, nine thousand Baht a month, easy.

That 500 Baht would be nothing to me, but would mean everything to he and his family.

All looks very sketchy when it’s written out straight like that. Must confess, though, that I was pretty impressed with the  elaborate craftsmanship with which he had devised the grift. It took him a good fifteen minutes after approaching me before he uttered, “You know, if I’d known you all my life, I’d have no problem asking you for help; but I’ve only known you five minutes.” (Pretty sure it was a good fifteen by that point; but, hey, who’s counting?) And it took him a good nother fifteen minutes before he did ask me for help.

In the end, and seeing the writing on the wall, he asked me for 10 Baht to get some water. When I offered him some of mine, he basically said To hell with it, and walked away — then turned around  and asked me tell any security personnel who might ask that he’d not been asking for money.

The Bangkok Symphony Orchestra concert was straight-up phenomenal! You may recall how much I enjoyed seeing the Hawaii Concert Band’s free monthly performances in the Park; but these cats, they’re playing on a whole other level. Makes sense, of course: Bangkok’s tax-base is certainly oodles higher that the Big Island’s. Funny thing is, though, they were all clad in jeans — from the conductor on down.

Before the concert, there was an emcee handing out party favours. I’m beginning to understand that the before- and during-concert gift-givings are as important as the music itself. See, they ask a buncha trivia questions, and whoever shouts out the right answer gets a prize.

At one point, for example, after the band having played the Rocky theme song, it was asked where the scene of Rocky running up the stairs had taken place. I think this was the only question with even a semblance of English in it, though some of the between-song banter was in English. Somebody shouted out “Philadelphia!”; and that somebody was winner-winner-chicken-dinner.

The music was a mixture of “legendary” Hollywood scores (really loved their arrangement of the James Bond medley) and Thai classics. All of these last sung by a rotating cast of characters — including, on one song, the conductor hisself. (His was the best, actually.) The program isn’t in correct running order, and in fact is not even inclusive. But it’s interesting to note its bilingual character. Anyhow, so, the before-concert prize was this big huge 2012 Propaganda calendar. So the first few were given away by trivia question, then the emcee asked for help in giving away the remainders (I later realised), and dude seated next to me (later turned out to be the one responsible for handing out the mid-concert favours, and even sang on a few songs) pointed at me. The emcee asked if I understood what was going on, I shook my head “No,” and he handed me a calendar.

I was then tasked to turn around and acknowledge the gift, to the audience’s delighted applause. I executed the “Wai” gesture… 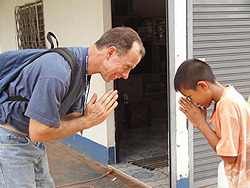 …which, apart from jaywalking and (natch) ogling the food-vendors’ inscrutable tableaux, is my favourite thing to do here. (Hope the Thais don’t think I’m being a poseur in doing it with such frequency.)

After the big calendars were all gone, they hauled out a buncha smaller ones, and it was a down-home free-for-all. Propaganda-calendar-mania right there in the park!

Here’s the band’s take on The Beatles.

Word to the wise: if you think it’s easy to eat two kilos of longans all in one go, it isn’t!

3 Responses to Grazing On A Sunday Afternoon