Yep, it’s true. As the title implies, the Big Island of Hawaii has kicked my dimpled ass yet again.

The day began with a drive up to the Koloko Cloud Forest, 5,000 feet above Kona. As per usual, the vegetation was too magnificent (although the view from the top was marred by, well, clouds). 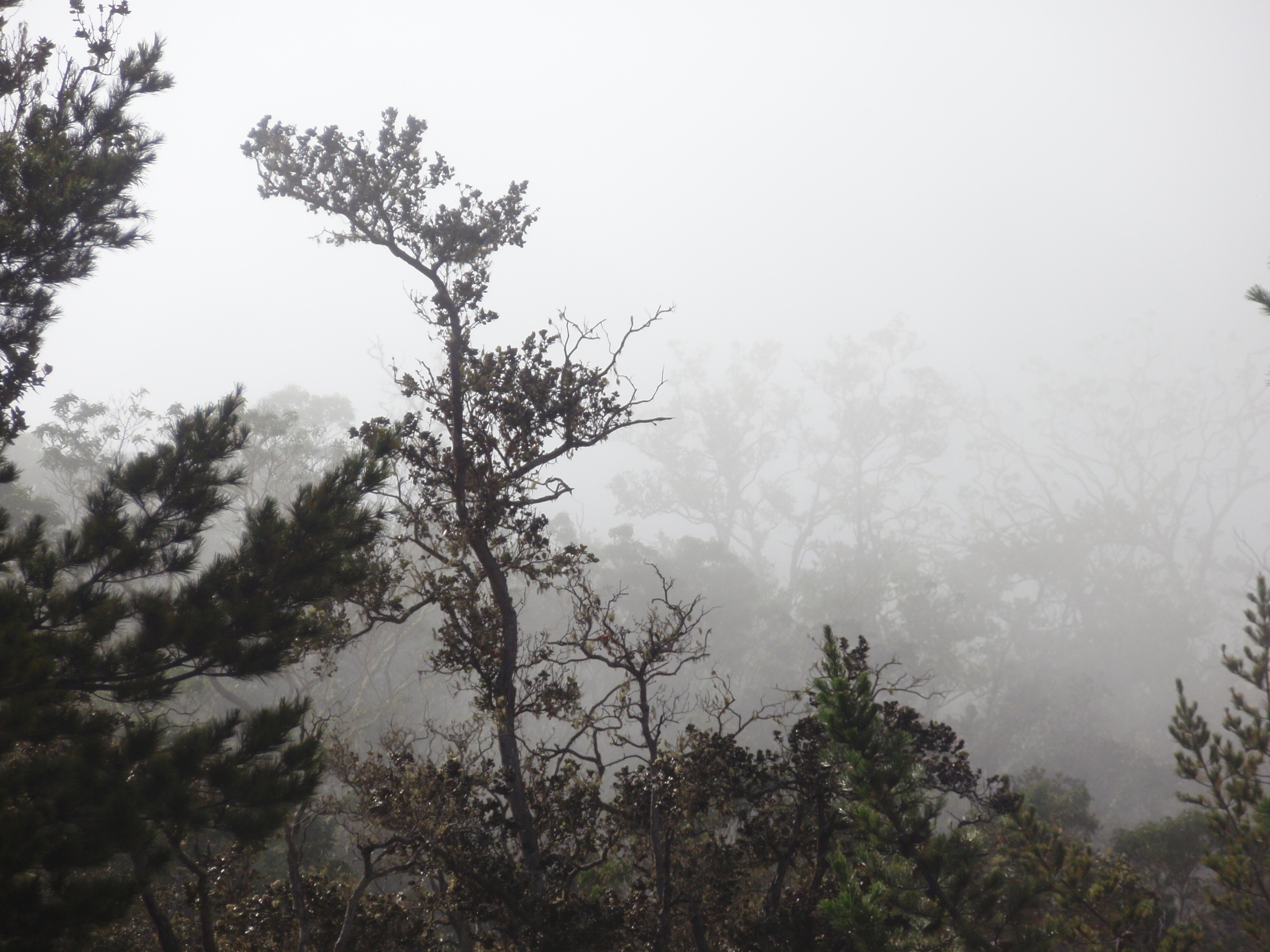 On, then, to some more outrageous snorkeling, this time at Kahaluu Beach. Even got to see a fish taking a shit; so that was nice.

Doubled back to downtown Kailua, and picked up some too-hot-to-handle Sapodillas from the Farmers’ Market (even bought some slightly unripe ones, to eat over the next few days)! After a wondrous lunch at the oceanside, it was time to bug out of Kona.

Seized, then, upon the chance to continue the Karmic wheel-rolling as I spied a hitchhiker right there in downtown; on his way, as it happened to South Point. Cool guy. Name of “Matt”, hails from Tejas. A fellow WWOOFer, and (could we get a fanfare, please?) a fellow Wonder Showzen devotee! (For those not in the know, the Showzen was the greatest teevee program in the history of teevee programming – and you can take that to the motherfucking bank, daddy-o.)

I’d been debating whether to make the jaunt down to South Point on my way around to the Volcano (it’s twelve miles from the main highway) or to try to see the lava flow. Matt believed that it’s not flowing at the moment, which corroborated what one of my co-farmers had told me a few weeks before the present date.

So, on to South Point it was. When we arrived at the parking area, there were a bunch of drunk rednecks (I dunno, maybe they were hippies – but they seemed too white and too fat to’ve been real live Punatics) jumping down this narrow chasm into an underground swimming hole. (Basically, another lava/ocean arch formation — this one quite elaborate.) 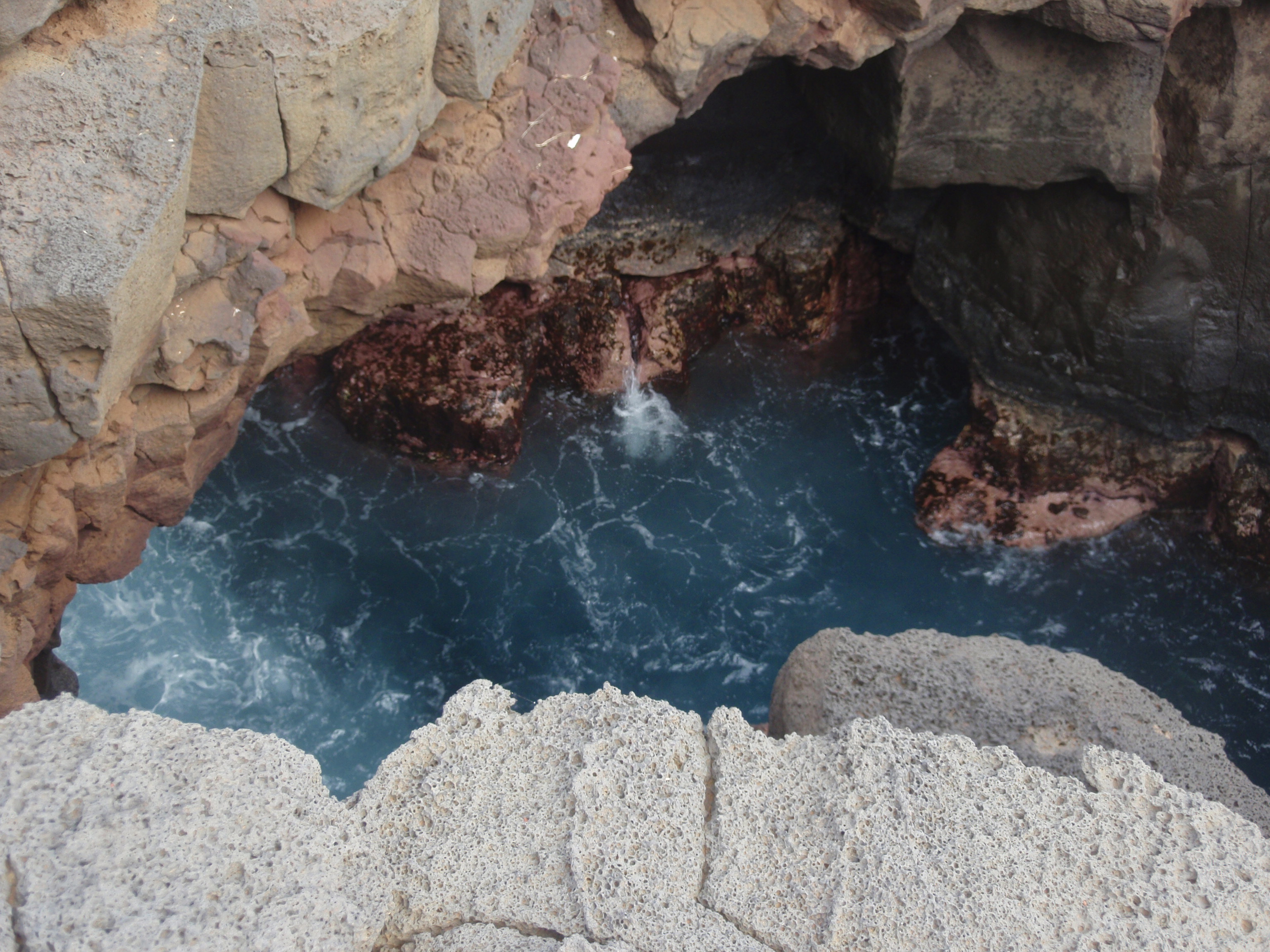 It’s a good forty or fifty feet down, I guess. Matt asked if I were going to jump. Don’t precisely recall my response; but it was words to the effect of, “See here my good man, are you outside of your cotton fucking mind?” But no sooner had the words left mine lips that he was stripping off and preparing to make the jump! Went and did it, too.

For what it’s worth, South Point is the southernmost point in the U.S. of A.. To me, it ain’t worth much. But I’ll tell you, the place rules. Here’s one pix of the awesome view. 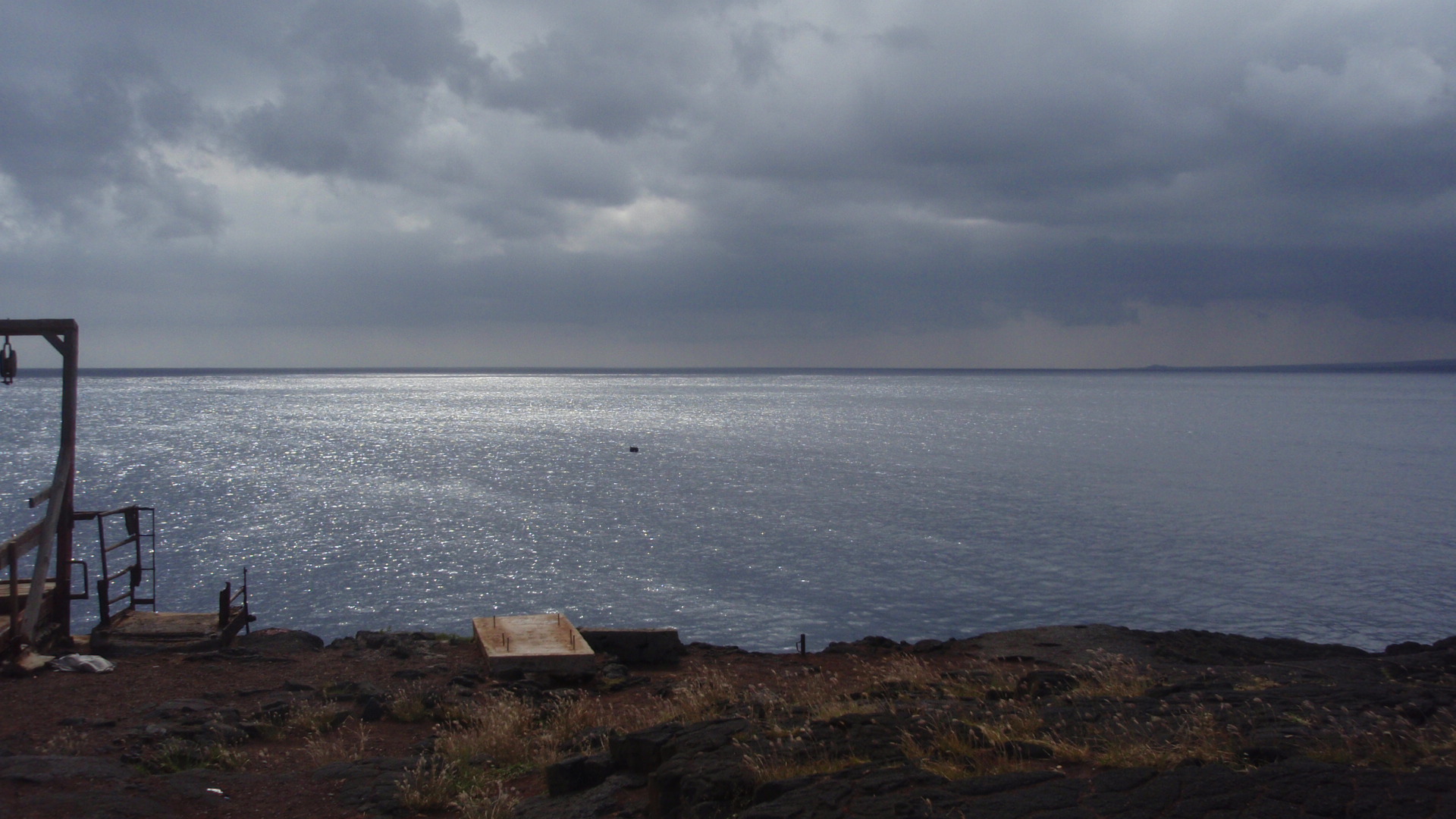 And it’s all good and windy, so the waves are friggin’ huge. Y’all know by now what a sucker I am for the pounding-ass surf… Just remember the mantra: photographs cannot, repeat cannot, do Hawaii justice (it’s especially tricky, I’ve found, with the colour of the ocean waters). 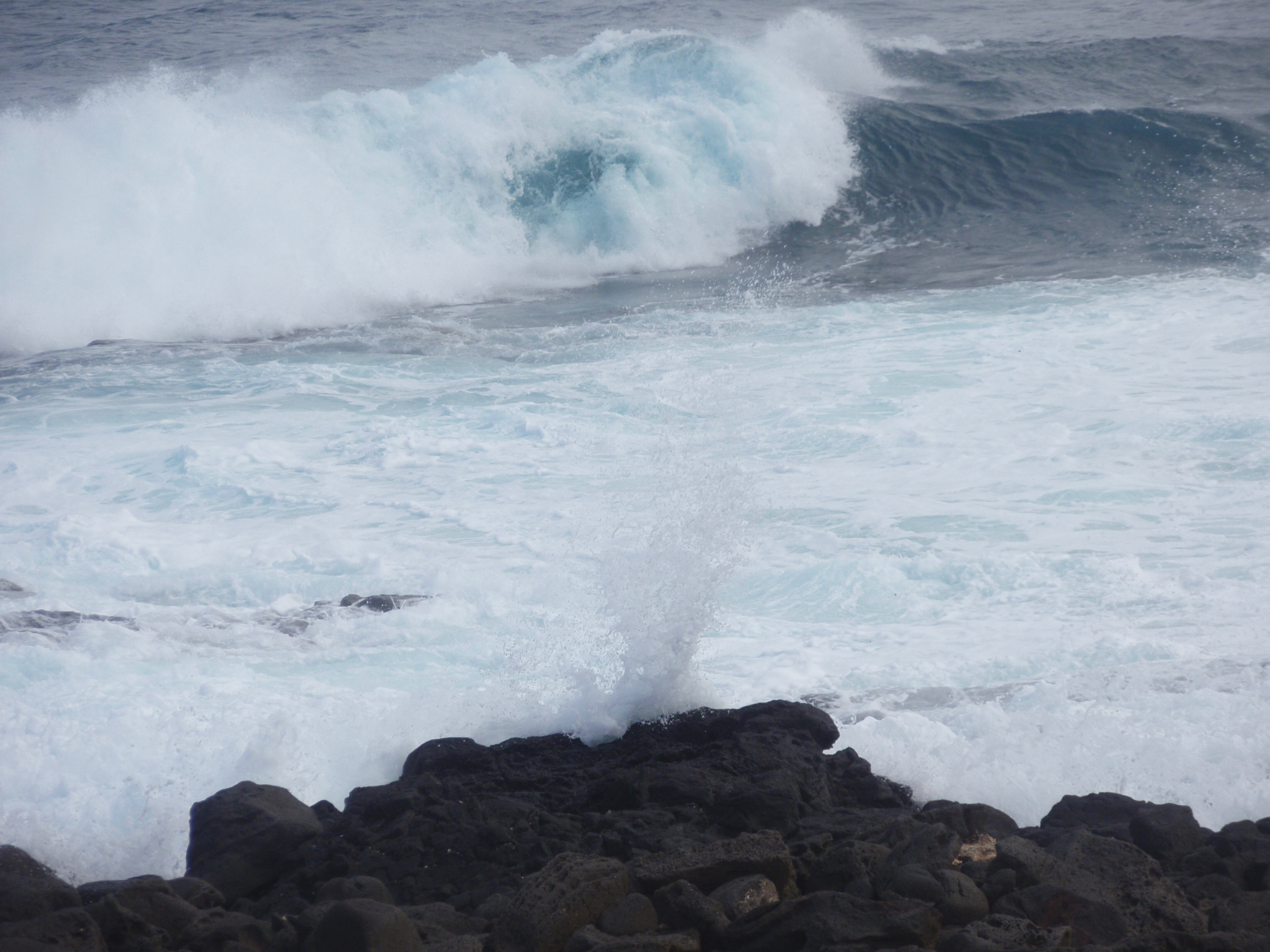 I gave Matt his leave to hike off to the Green Sands beach, sending him along the way with a few bananas, and somewhat reluctantly agreeing to sell to him the water I’d purchased as we were leaving Kona. I’d have liked to have hiked out to Green Sands as well; but at two-and-one-quarter-miles for the each direction, I knew that it’d take too long to both make the hike and goof off at the beach. So…

Finishing it all up was the drive from South Point to the Volcano: ho-hum, only the most insanely beautiful drive EVER! Shit, this Island is too god damned much; you know what I’m saying? Here’s the best bit. Imagine, right, if the picture were in focus. Okay, think about how bad-assical that would be, then multiply it by eighty-four, and you’ll know, roughly, how bad-assical it looks in person. 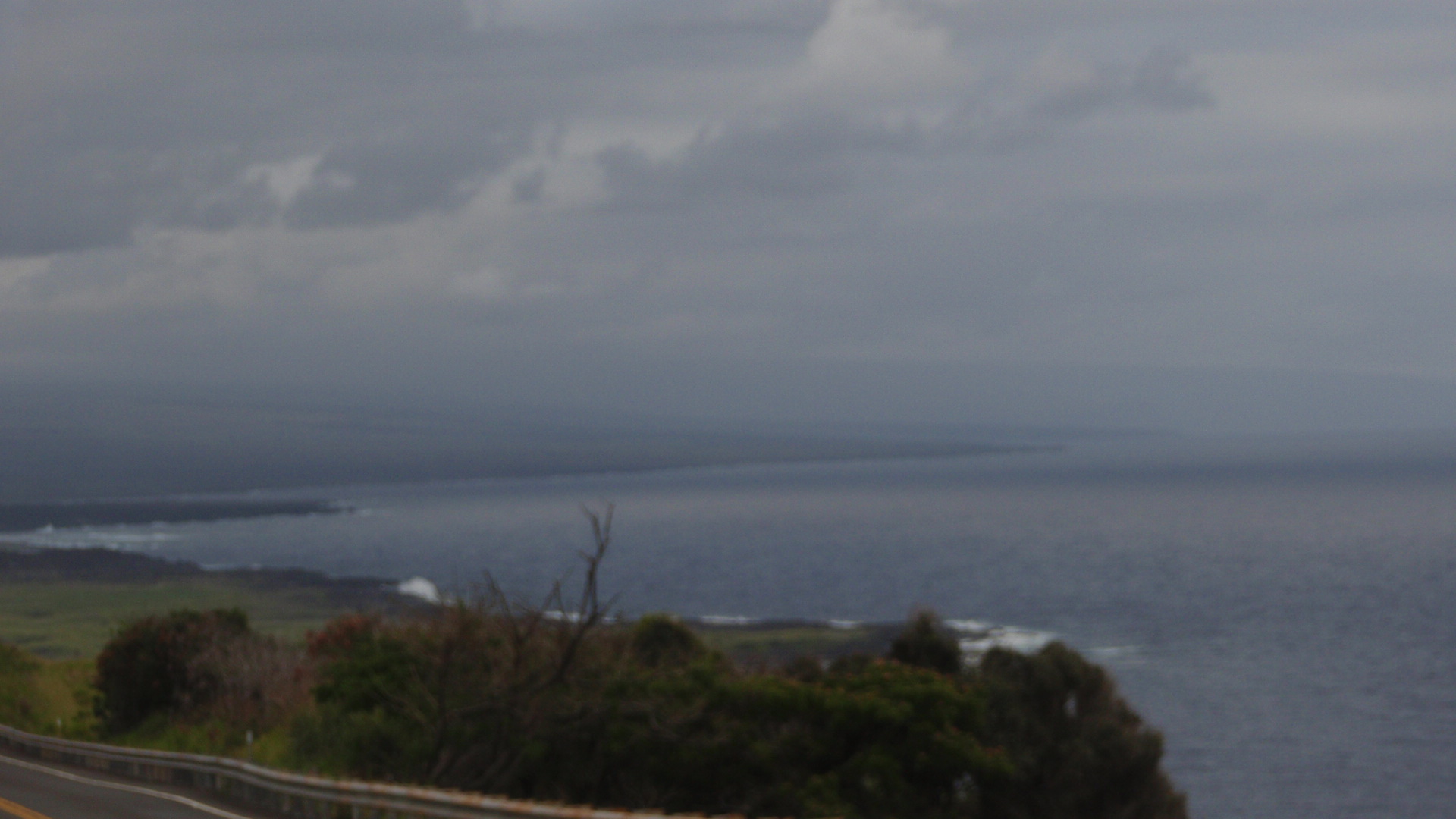 In the little town of Naalehu was only the most coolest road sign EVER! 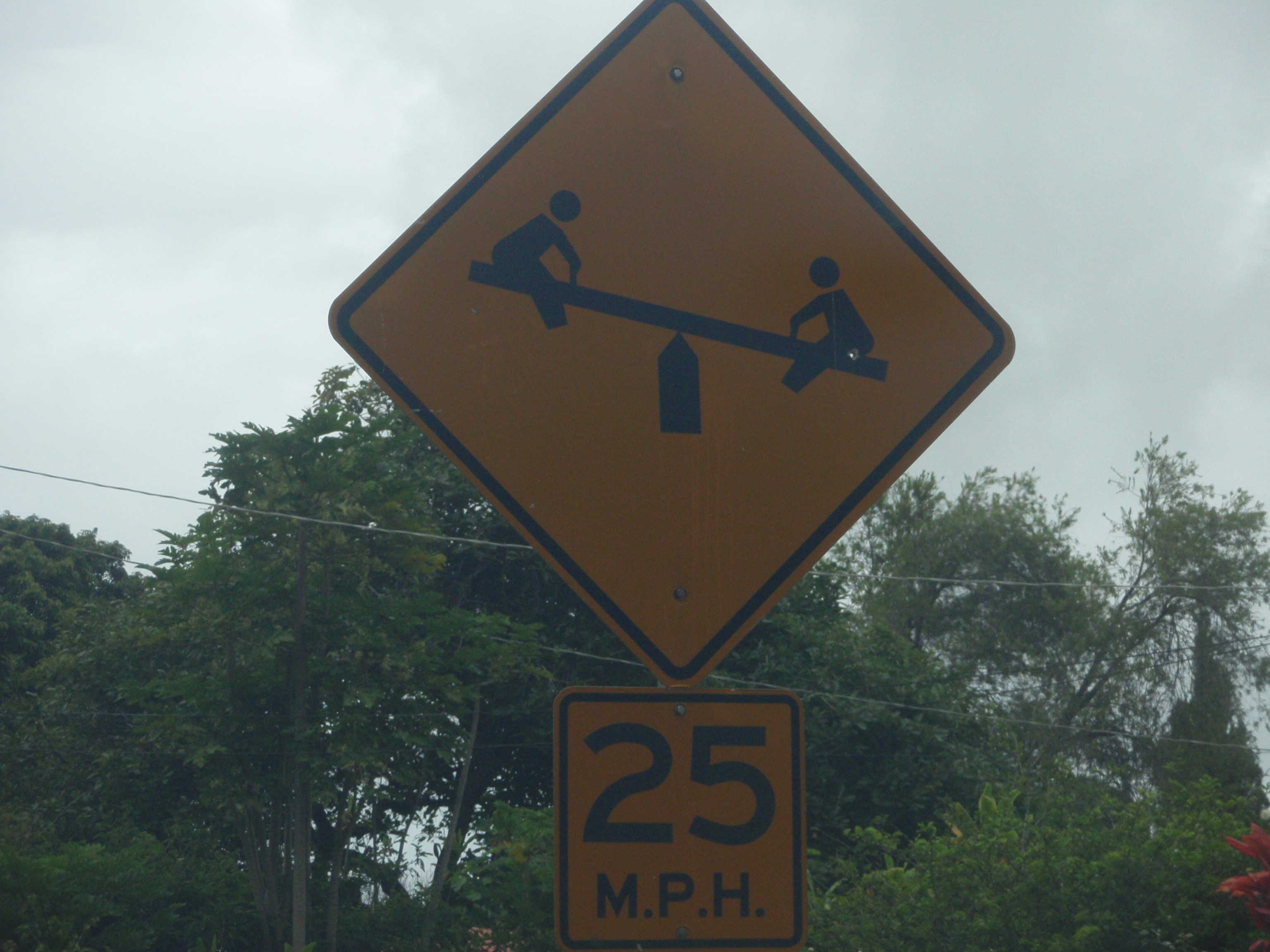 Are you fucking kidding me? Too bad, though, I’ve not yet rolled the Karma wheel ‘round far enough to have been lucky enough to actually bear witness to keiki playing the goddam see to the saw. That’ll have to wait ‘til another day.

I’m actually staying in a hostel about fifteen miles North of the Volcano. Way out in the sticks; so, no Internet access. Ergo, by the time you read this, it will already be tomorrow (or wheneva).

Sigh, received an e-mail from my sister, relating that she’d wept tears the entire flight back to Seattle after having lived on Oahu for six months. I believe I shall be doing the same come Tuesday. Big Island of Hawaii is the best.