In the three days since last we spoke, I’ve been electrified by a bolt of lightning called “The Big Island of Hawaii”. Yowza, this island is un-freakin’-stoppable. Here’s how it went down.

On Wednesday morning, I patronised, for the final time (tears, they weep) the Hilo Farmers’ Market. Got me some kick-ass Longans, and some god-damned off the hook Sapodillas. The Sapodillas are getting better by the week — and me for the aeroplane in four days’ time. O cruel world!

Then it was on to the Saddle road connecting Hilo and Waimea. The “saddle” in question is the high-point in the big valley between the world’s tallest — as opposed to highest — mountain (Mauna Kea) and the world’s most voluminous mountain (Mauna Loa).

At the saddle you can turn right or left and head up the side of either one. I first went up Mauna Kea, and was treated to some utterly stunning (‘specially for the cloud-lovers among us) vistas. 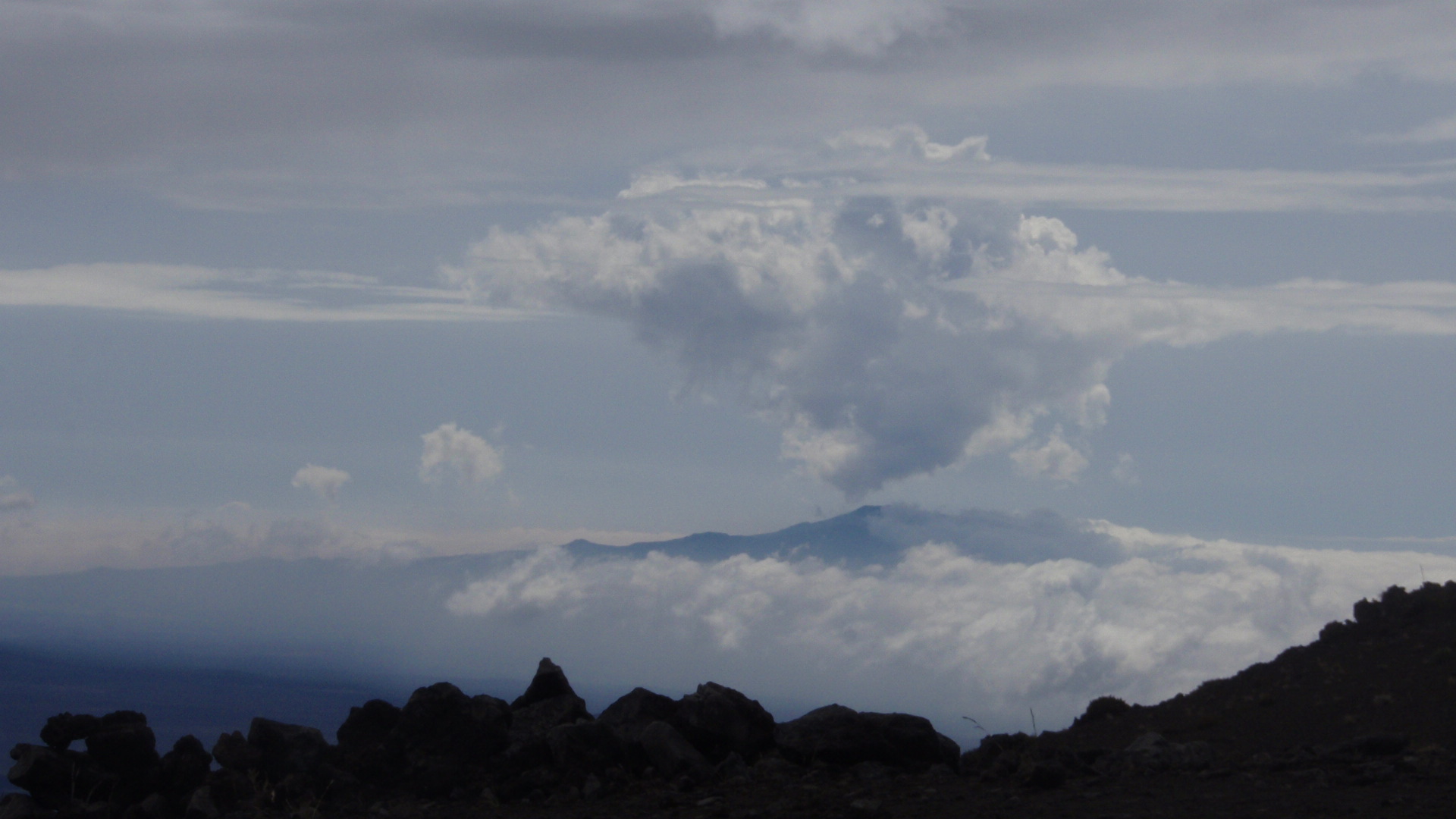 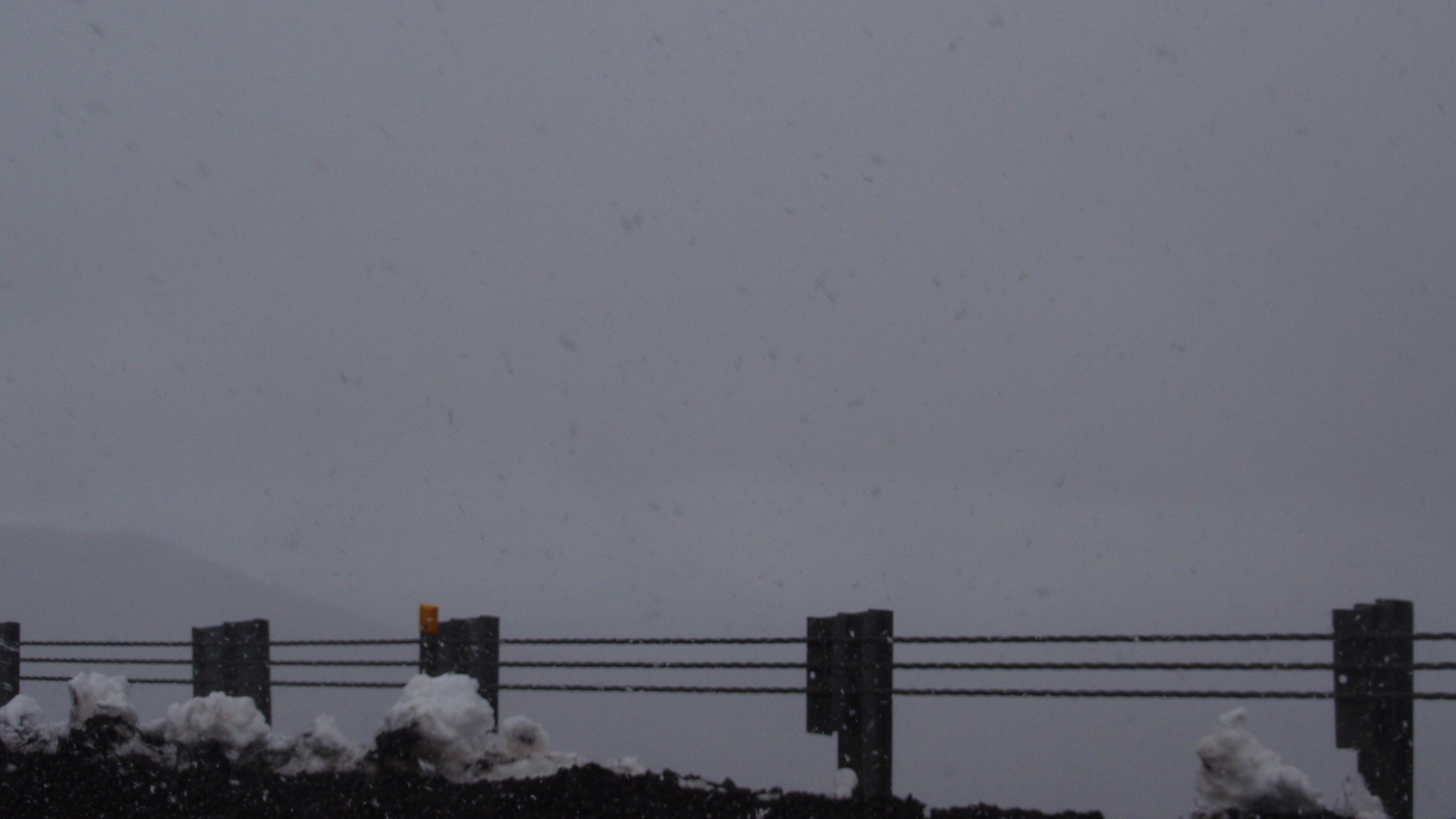 Next, after a brief hike around the saddle area, it was on up Mauna Loa. This one can’t be summitted via motor-car; but there’s a road from the saddle that leads up to a weather observation center at about 11,000 feet. It’s my kinda road, too: a twisty, windy, hilly mountain drive, with no bumpiness. 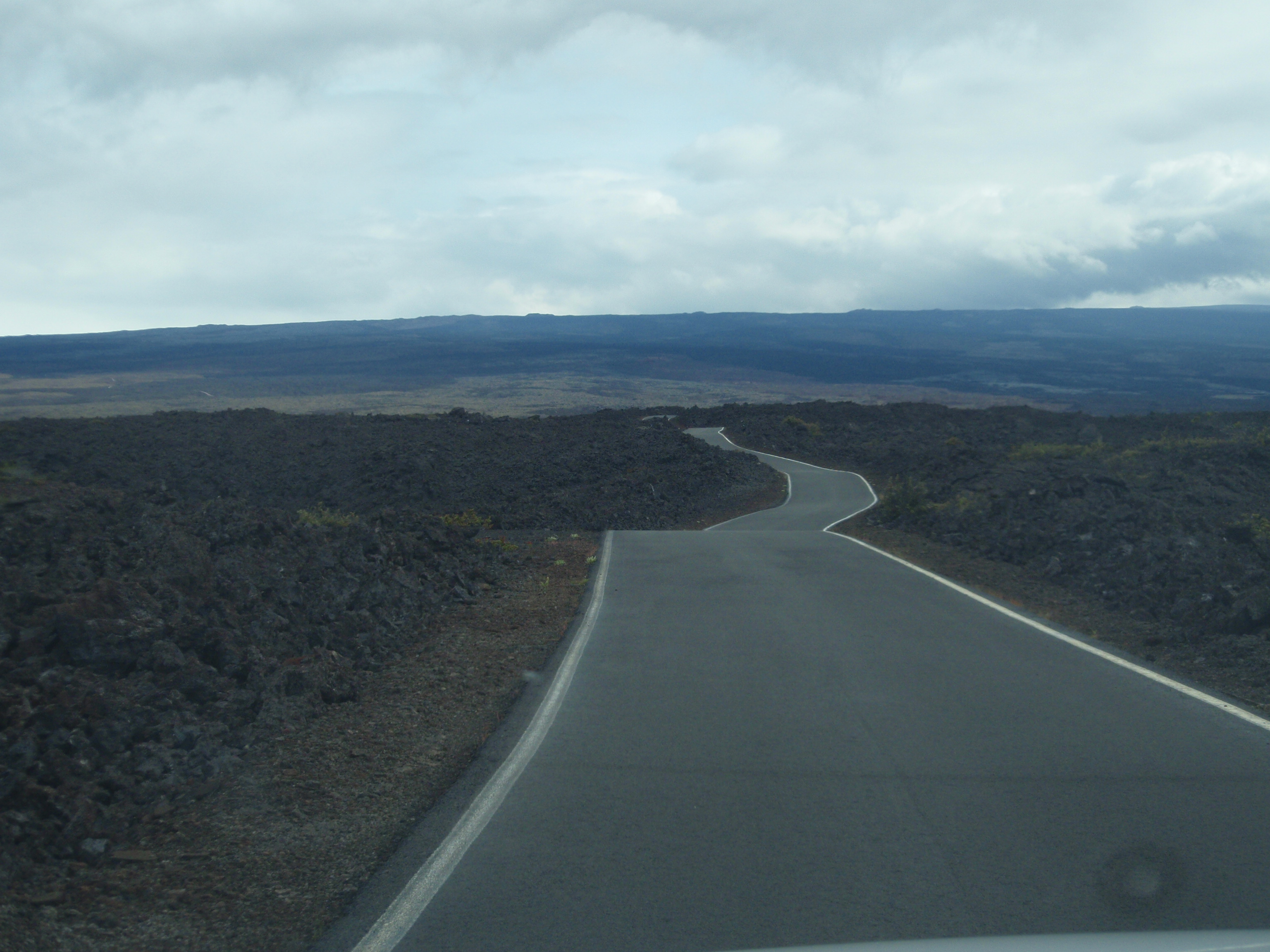 Except, the improved road ends after a few miles, and it’s on to some very bumpiness. Oh, well, fun while it lasted! I begged out at 9,000 feet or so, ’cause it was just getting bumpier and bumpier the higher we climbed. Still some superior looks from this mountainside as well. The twilight drive from the saddle to Waimea turned into an all-out fog-fest. I thought I was frickin’ in Seattle (or what). Beautiful drive, though.

As they all are, in point of fact. Word: if ever you’re privileged enough to motor it around the Big Island of Hawaii, take the back roads, and drive slowly. You won’t experience belief over how beautiful it all is: the mountains, the ocean, the clouds, and especially the foliage. Mercy! 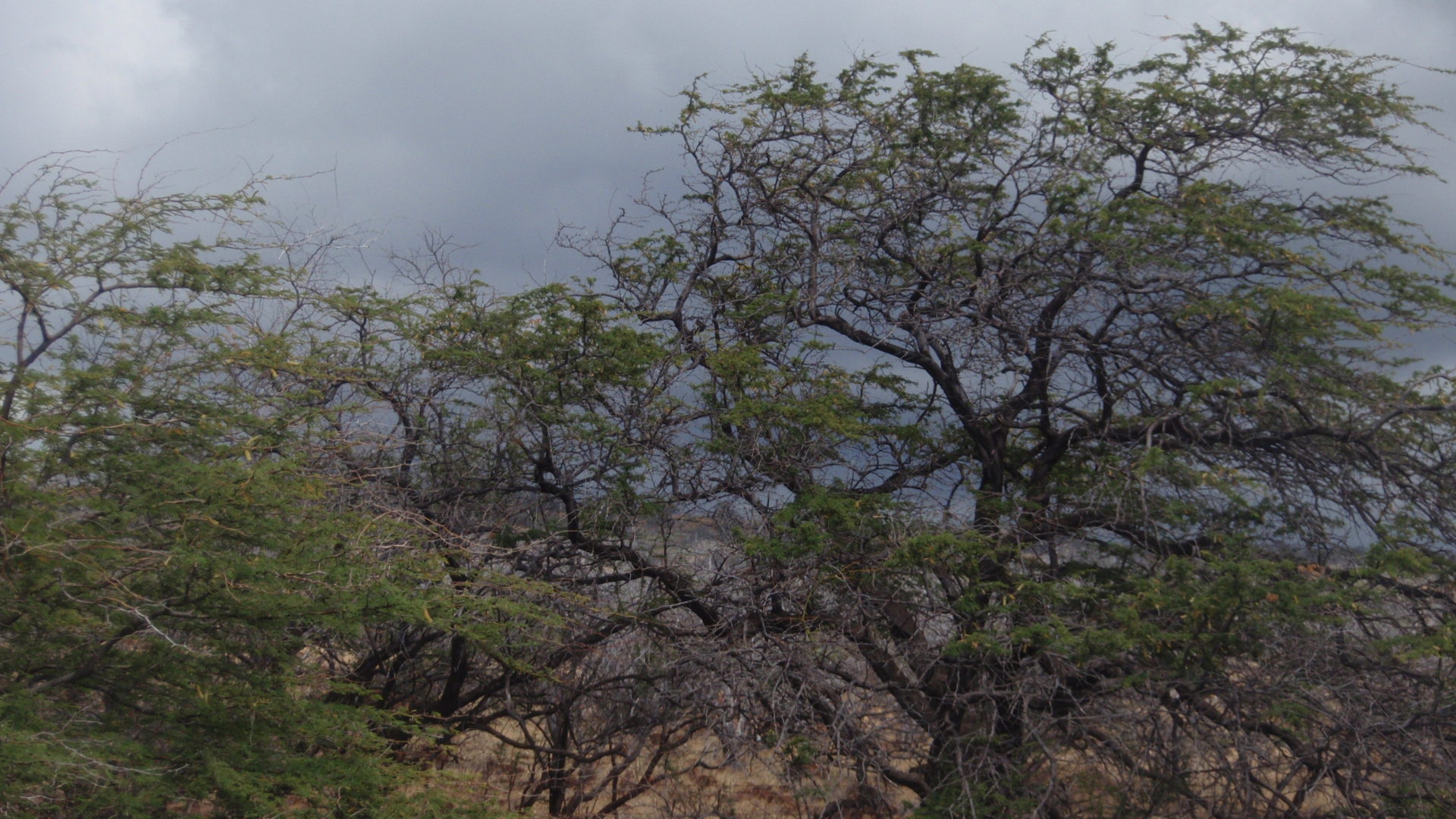 And check what the wind’s done to these trees: 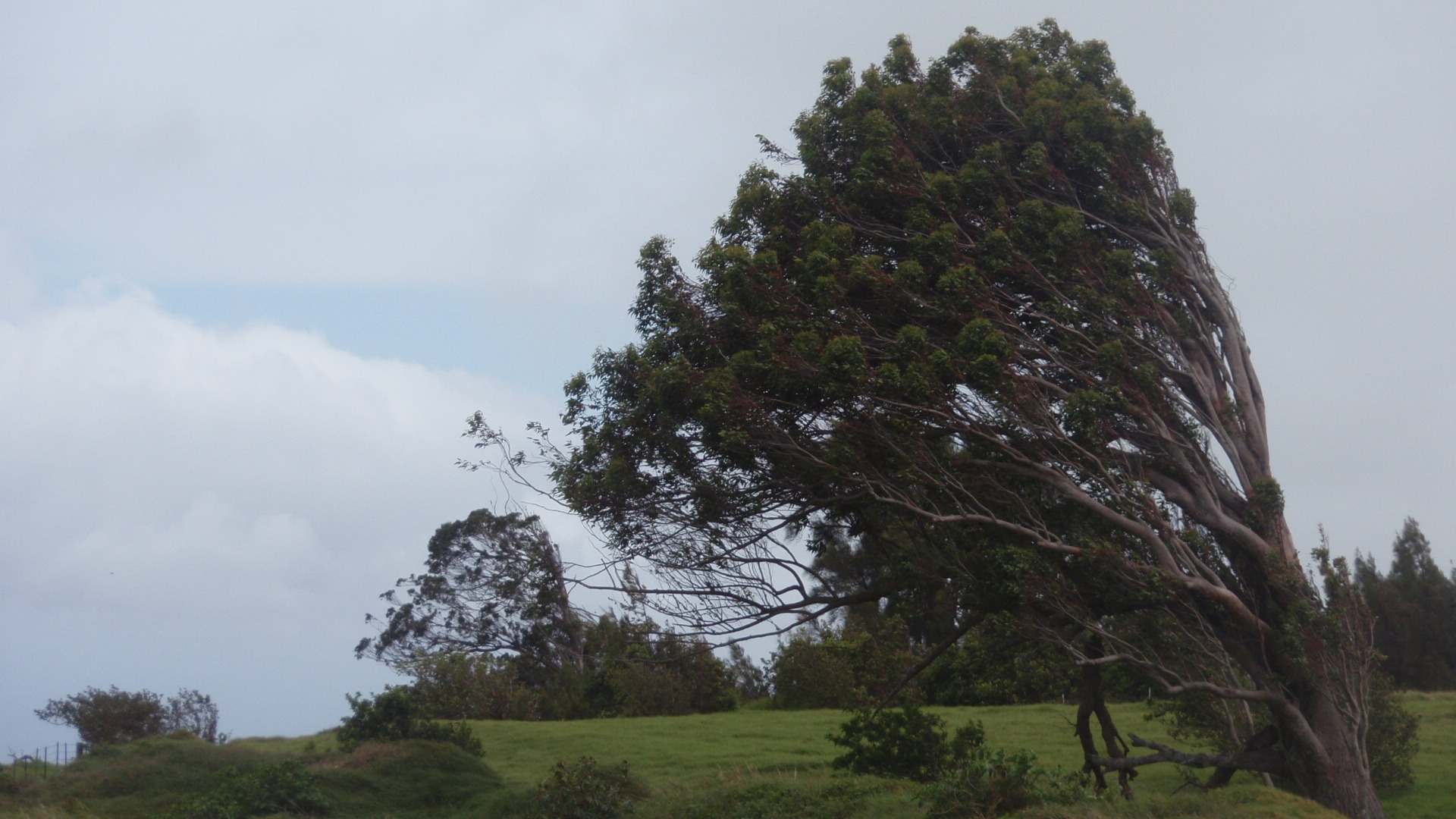 An aside: the hotel/hostel at which I stayed in Honokaa the first two nights is a nice little place. Dorm beds for twenny bucks — and I was the only guest in the dorm each night. Had the pick o’ the litter (though, truth be told, the mattresses were pretty lame). Anyhow, among the volumes in the establishment’s library is a book by Regis Philbin and a book by Seymour Hersh. Now, that’s what I’d call “eclectic”.

Thursday morning was a drive up the Kohala Mountain Highway to the Pololu Valley at the Island’s northern tip. Picked up a hitchhiker just outside of Hawi, on his way to the valley as well. I’d hoped to pick up one per day at least, to help repay the Karma, having been the beneficiary of scores of generous motorists lo these last ten months. But there really haven’t been any on the roads this week.

While not as jaw-dropping and soul-lifting as the Waipio Valley, Polulu is certainly gorgeous enough. 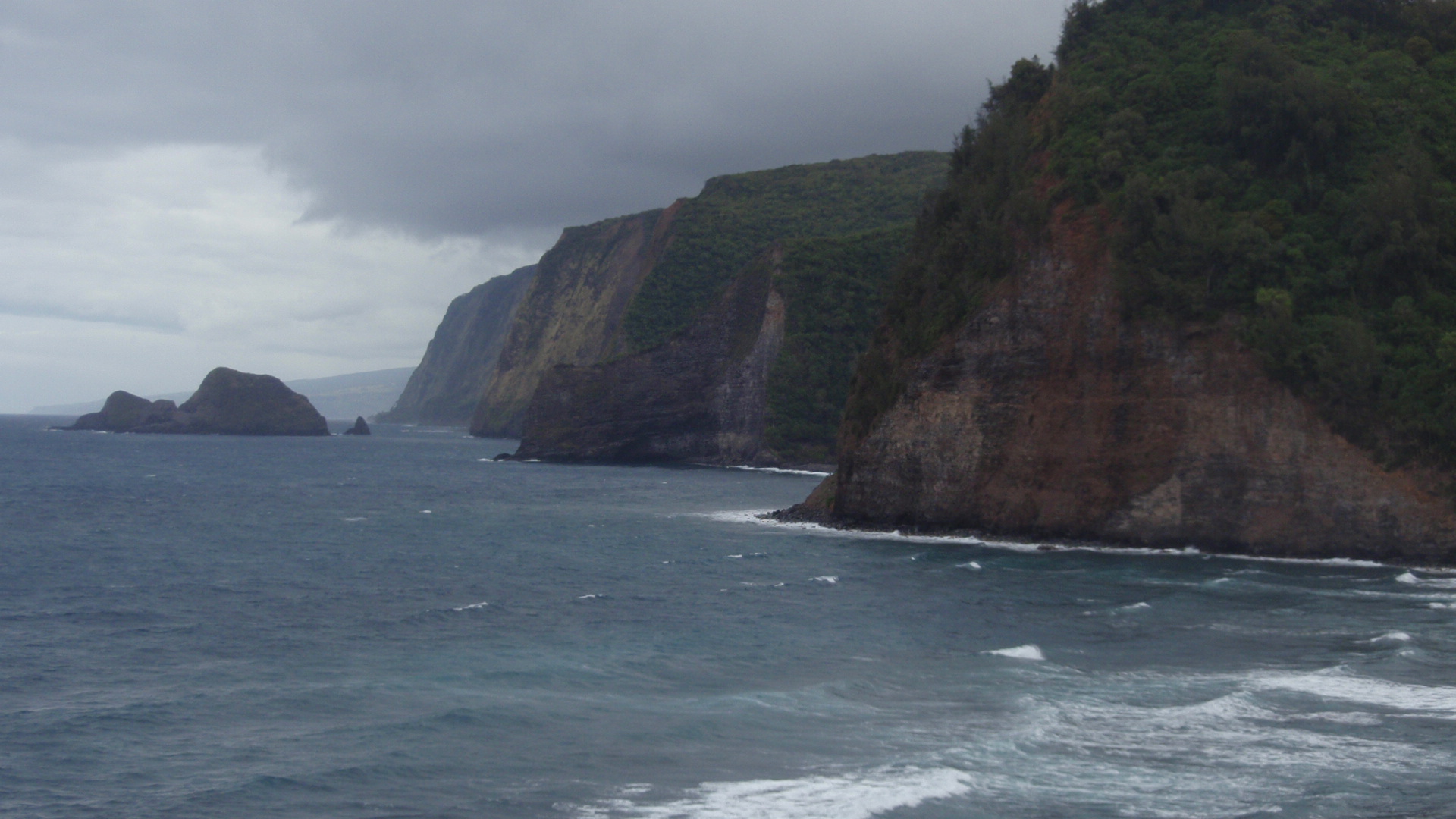 And not to mention that the hike in and out is much easier (truer still for those silly enough to hike into and out of another Big Island valley so soon after having attempted to destroy one’s calves hiking out of Waipio…). Also, no camping is allowed in Waipio, but in Pololu one can set up shop here, there, or anywhere. Even saw a dude with a lean-to shelter constructed out of dead branches. While it was tempting to put down roots here for the night, I decided there was much yet to see, it being barely noon and all.

So it was on down the magnificent Kohala coast to the Puukohola Heiau; the most sacred temple on the Island, and a National Historic site. Ranger there was really cool. It turns out that when in Seattle for a Park Ranger conference, he stayed at the Sheraton (where I used to work); and (get this), he was born and raised in Honokaa, and used to work in the hostel where I’d stayed the previous two nights. Small world, yo!

Next, a stop at the Puako petroglyph site; which we’d visited when the folks were here a few months ago, but which I couldn’t resist checking in on again. These things are so trippy and/or freaky and/or cool. Can’t wait to check out the volcano site in a few days’ time! 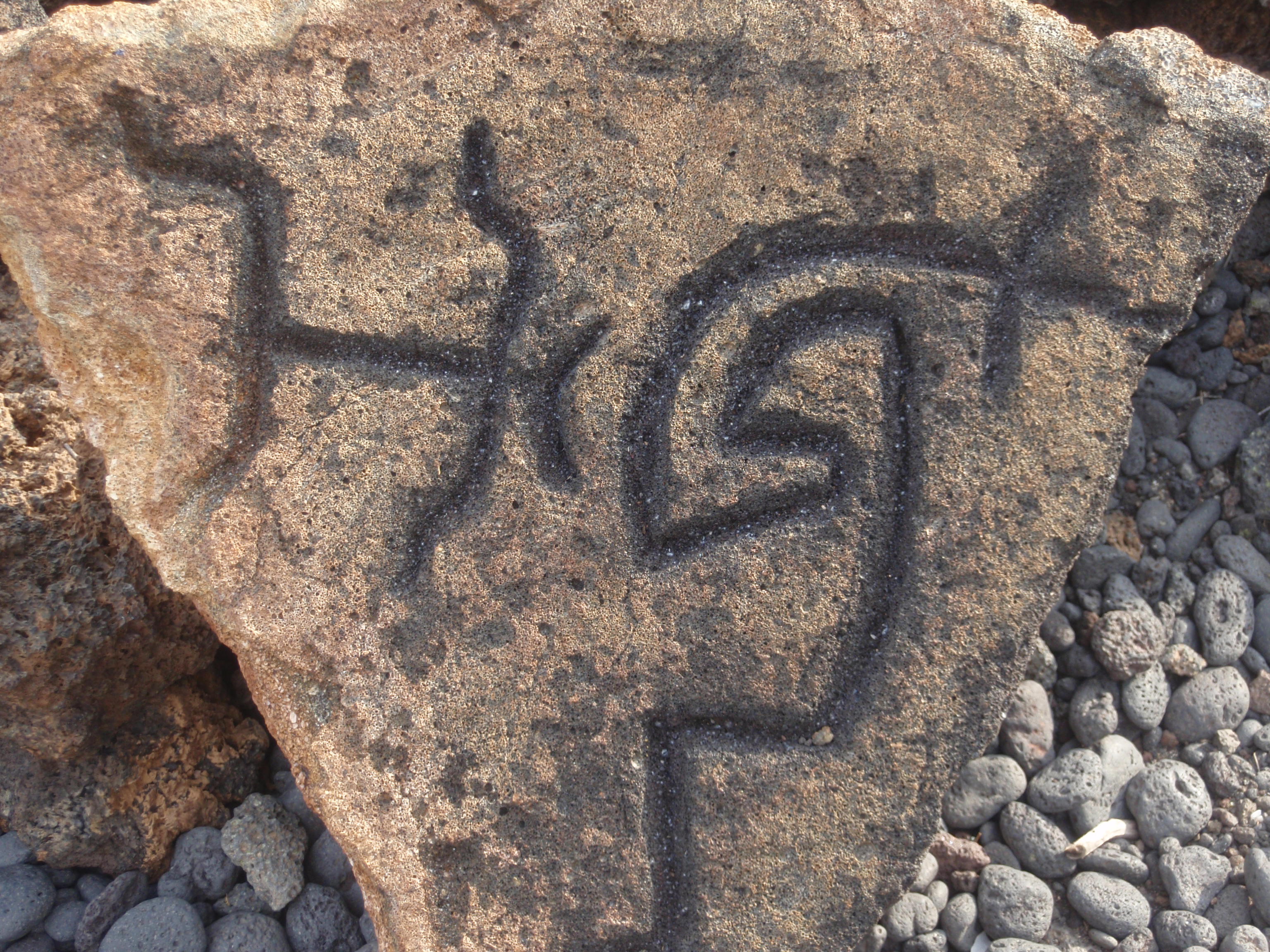 Finally, down to Hapuna beach for a nice dip in the warm Pacific Ocean, before retiring for some stealth camping on the cliffs above the beach. Well, if you could call it that: ground was too rocky to sleep upon, and there were no trees from which to hang a hammock. So the only thing to it was to sleep in the car. Perfectly warm night, at any rate (and, o’ course, the price was right…).

To-day was begun with a nice hike at the Mauna Lani resort area, covering some ancient archaeological relics and an ancient fish pond, and ending up with a coast-side stroll. Mom, you’d have enjoyed this one!

Thence it was on to Makalawena beach. Farmer John recommended it; indeed, it’s his son’s favourite spot on the Island. Plus which the guidebook calls it the best beach in the State. After a hellacious drive in (made the bumpy Mauna Loa seem, by comparison, smooth as silk) to the parking area, followed by an hellacious (odd note: Word Press’ spellcheck has flagged “hellacious”??) walk over sole-killing small-ish and sharp lava rocks, the beach was…underwhelming. It’s pretty enough; but certainly not (in the current blogger’s estimation) worth the effort. Although there was some nice folk there: 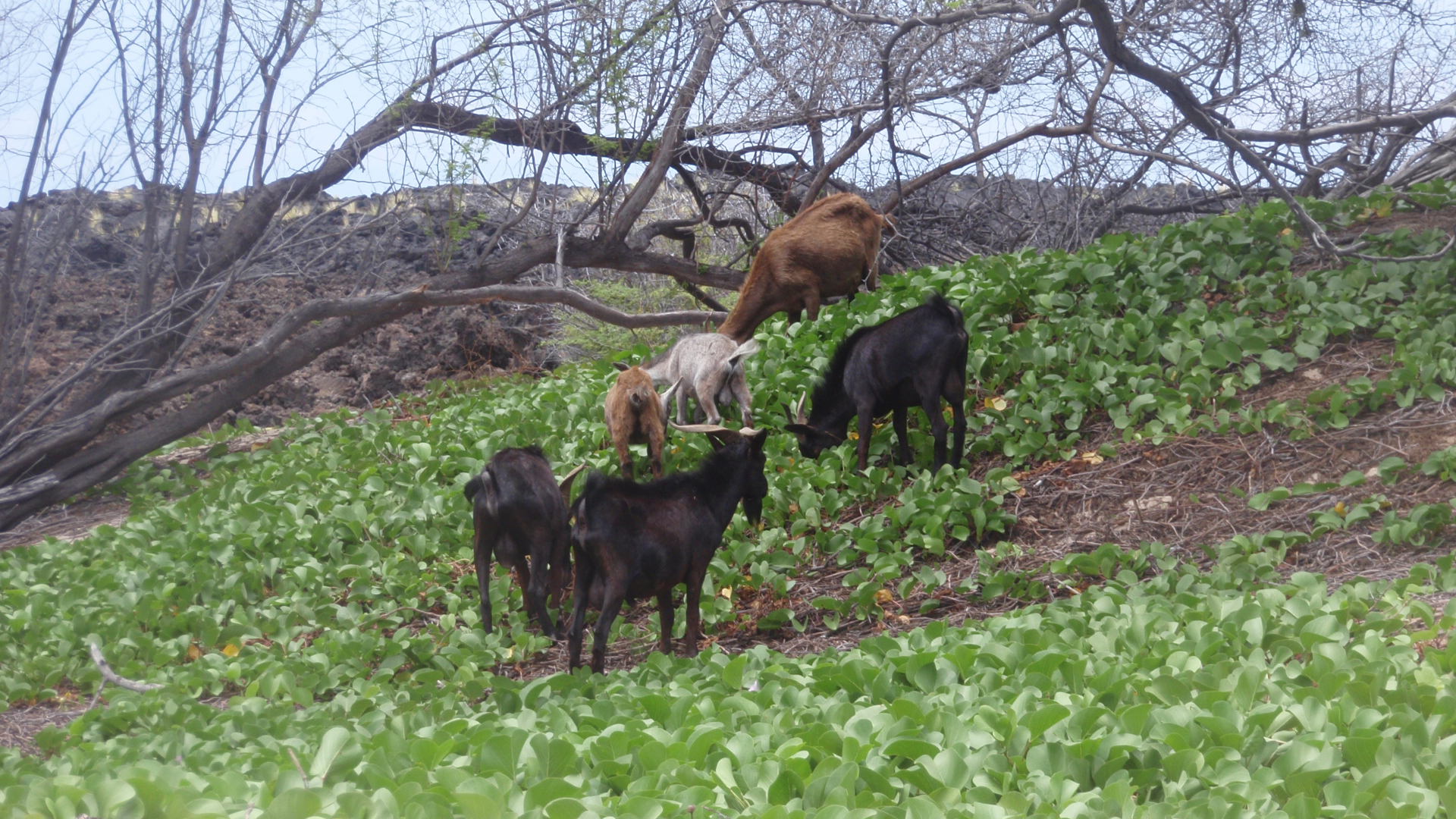 It’s all good; ’cause next it was on to some outrageously good snorkeling at Honaunau. Shit howdy! Funnily enough, given all the colourful varieties of fish, my favourite type is probably the one that’s all black, with just a bit of dark blue trim. Anybody know what it’s called?

Also at Honaunau is “Arch City”, a collection of arches and crevasses carved by the ocean waves out of the lava. Love this kind of stuff! 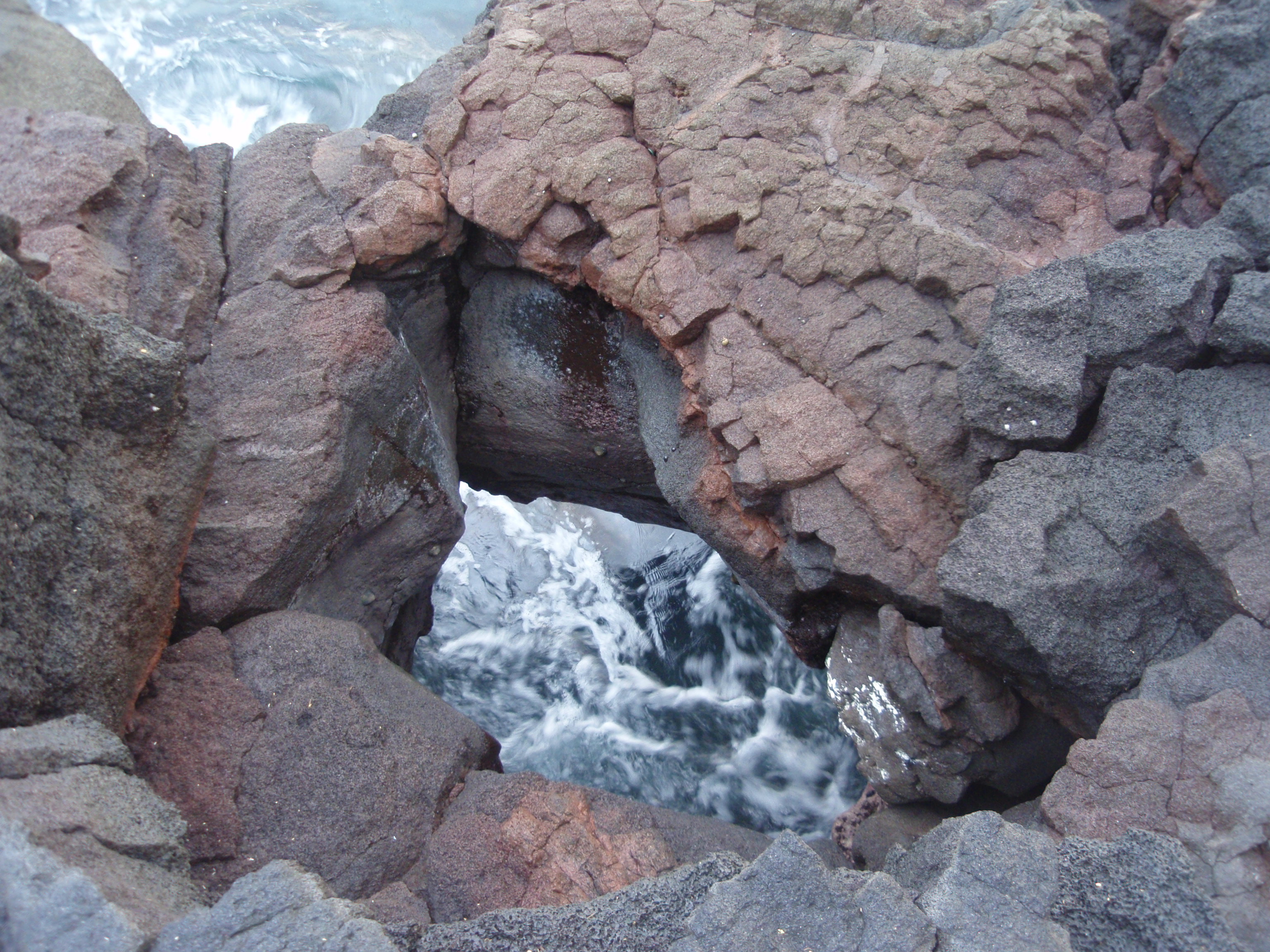 Finally, another drop-dead Kona sunset — only this one was cloud- rather than vog-driven. Ha, it’s even raining as we speak! Who says it never rains on this side of the Island? 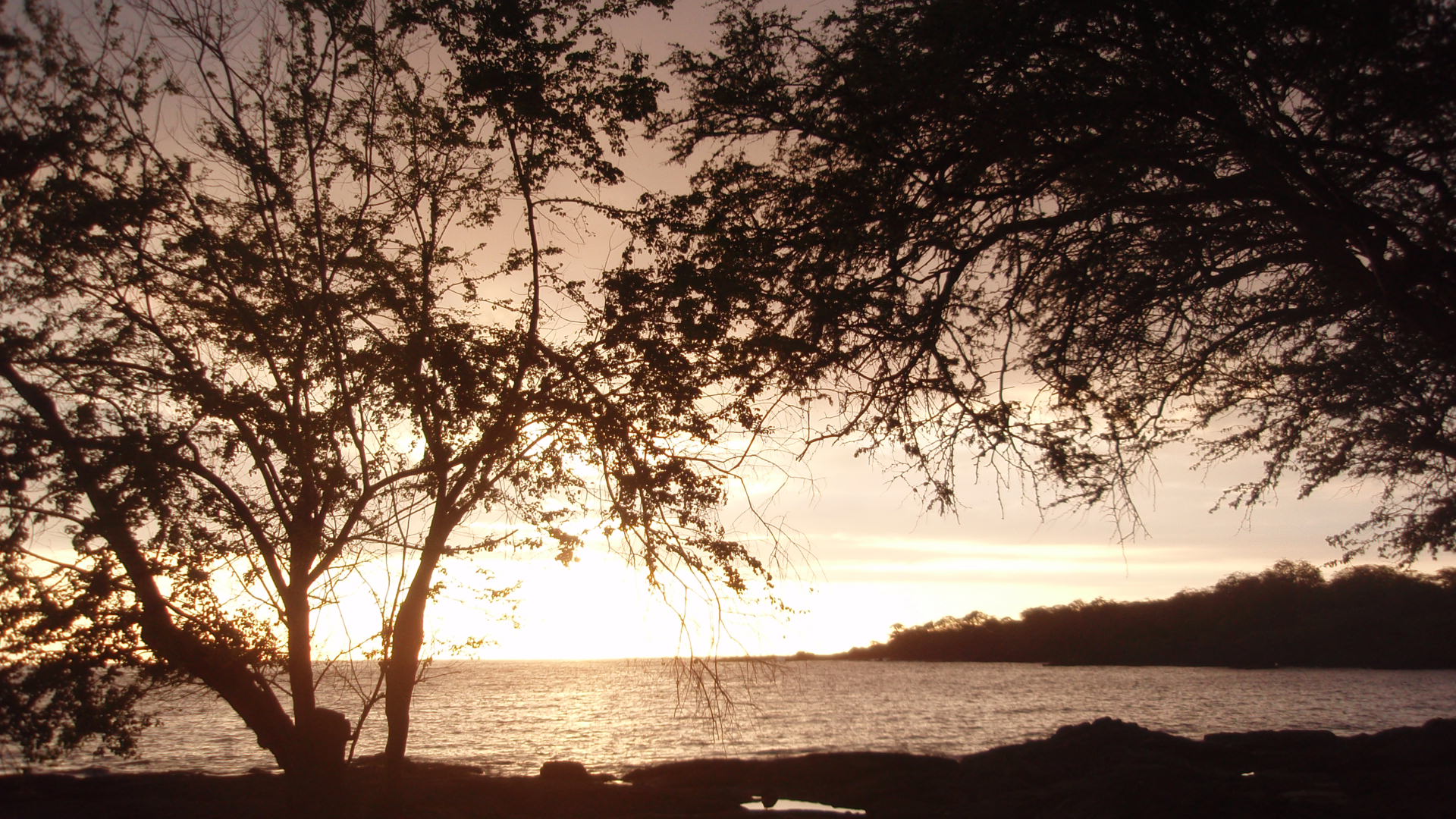 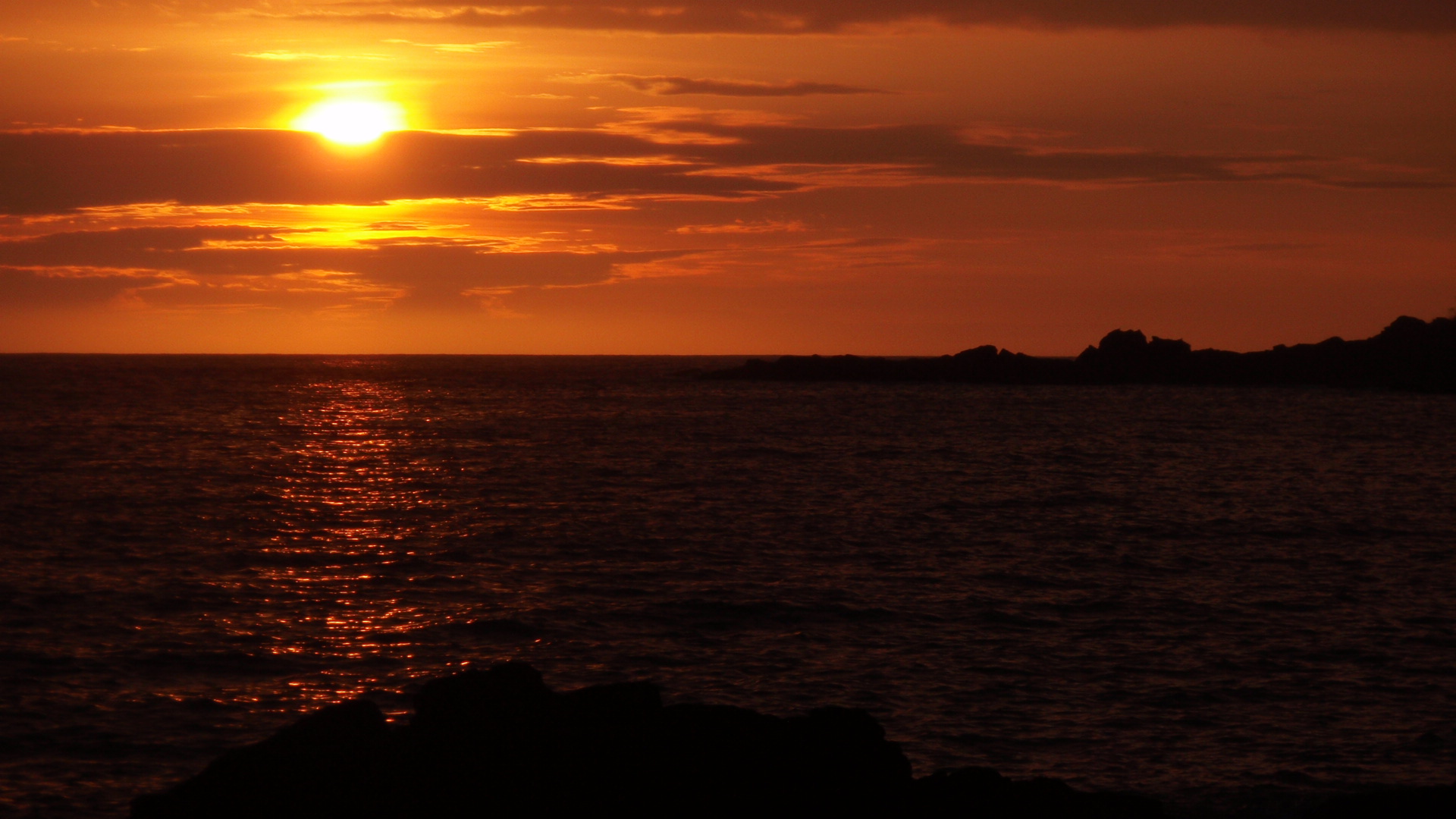 Well, I knew a week wouldn’t be enough time to goof off in on this Island. But, I keep telling myself: I will return, Oh yes, I will.