There’s so much crack-a-lack jammed into the GTF schedule – music, theatre, film, visual arts, lectures, dance – it’s making this poor li’l white boy’s head spin attempting to get to as much of it as possible. There’s more coming, too, as the photography festival is set to open to-day. And the Hungry Ghost Festival, which had lain dormant for a week or so, has suddenly leapt vigorously back to life.

Big fat props to the Festival programmers. I’m pretty sure that blogging about it all will be impossible, but I am getting ‘round to dumping lots of photos onto the Flickr page – if interested, see the 2014 GTF and Malaysia 2014 sets. Here’s a little sneak-preview of the Hungry Ghosts action: 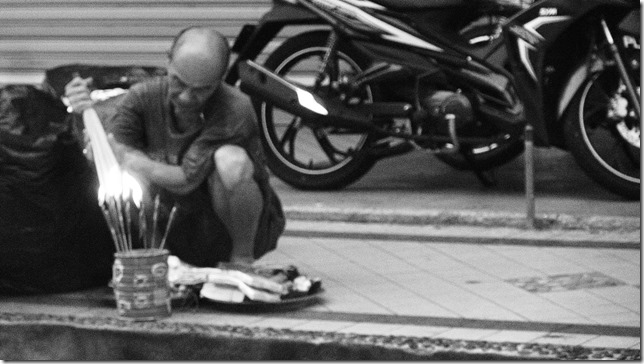 Much more, hopefully, to say about that, but it’ll needs must wait for future bloggings. To-day we want instead to discuss about a fun-assed workshop which caused attendees (there were eleven of us, I think) to put the brakes on the consuming side and throttle up the creating side – if only for a day.

Held in conjunction with the Ismail Hashim exhibition — about which I enthused before now – Sunday’s daylong event had us studying and creating photographic typologies, as these were an especial hallmark of Hashim’s work. A typology is a collage work comprised of a multitude of variations upon a type, all presented in similar style. There’s a big one in the post linked just above, and here’s another – probably his most famous — from the George Town daily’s write-up for the exhibit. 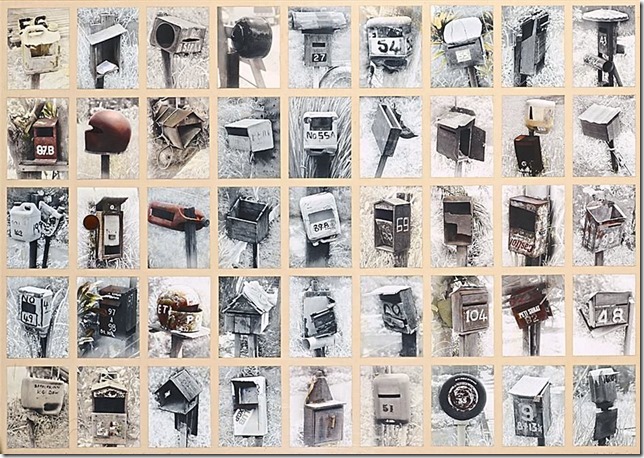 We looked at a few from Hashim’s work, and several more from some other cats, and then the instructor – a transplant from KL who’s one of the exhibition’s principals – set us loose upon George Town to pick a topic and fire away.

Had it been a few weeks ago, then I would (natch) have chosen to typologise the King Of Fruit. That door’s having been closed, I next thought to try for peeps with cigarettes dangling from their mouths. George Town has got to be the cigarette mouth-dangling capital of all known universes – but even so, I didn’t think I’d be able to find between twenty and fifty of them in just a few hours’ time. So, I turned to motorcycle helmets.

No, my disgust/revulsion of and blood-curdling enmity for the motorcycle has not abated. But nor has my fascination with these despicable machines’ drivers, whose marvelously inscrutable faces seem to each be hiding one-thousand-and-one stories. So too their headgear, which is worn in every colour of the rainbow, any shape imaginable, and of all materials under the sun. Pretty sure I’ve even seen somebody using an upside-down colander, for fuck’s sake. And of course, they’re everywhere – so I wouldn’t want for material.

It took a little while to figure out the optimum zoom length – trading better resolution in the narrower shots for ease of obtaining focus on objects in motion in the wider. I deleted scads of shots that looked a little something like the following. 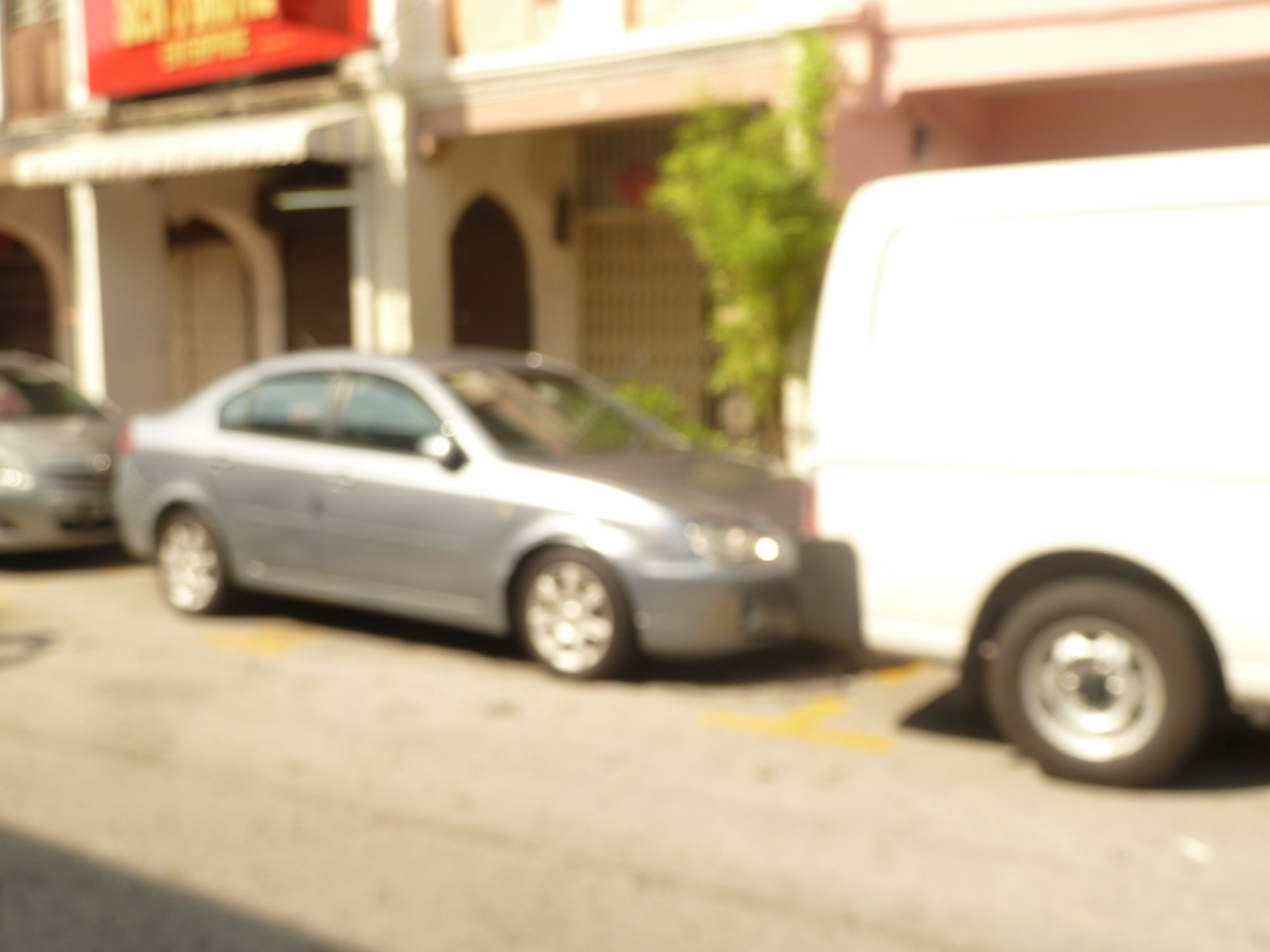 The easiest of all, of course, were when the objects were not in motion… I was more less trying to get a front-profile angle which would show both the drivers’ faces and the helmets’ shapes and sizes. Once I got warmed up, the shots started to fall into place more and more easily.

Before I knew it, I’d been shooting motorcycle helmets for a couple hours straight – the camera had never, in all its born days, been remotely so hot to the touch as it was now. We’d been instructed to take lunch on our own recognizances, so I figured I’d grab a bite to eat, pop into my room and crop out the pics I already had, then go out and shoot some more.

Though the season officially ends on July 31st, there are still a few vendors selling island-grown Durian. Including, there’s one guy who just piles them all into the back seat of his sedan — so hilarious to see — and to stock up his stall goes and grabs them a few at a time between customers. I’d had some disappointing fruits from him earlier in the season, so despite he’s a very nice guy, had shied away from him since. But in the last few weeks or so, I’ve been availing myself of his services again, and have been doubly impressed.

And now, following the latest ace up his sleeves, my socks have taken a permanent vacation. Funnily enough, he was trying to push upon my dimpled ass a different fruit. This one, though, with its curious and intriguing shape and its mildly intoxicating aroma, was calling my name. Sometimes, a son of a bitch just knows that he’s in the presence of a life-shattering Durian. So I stuck to my guns, and fifteen Ringgit later, I was in possession of one of the finest Durians of my life. Two weeks after the supposed end of the season, too! Fucking god how I love Penang. 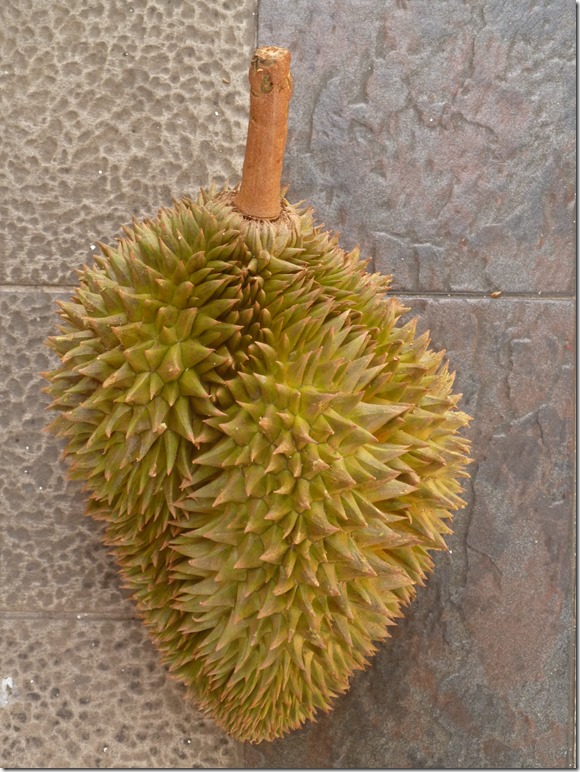 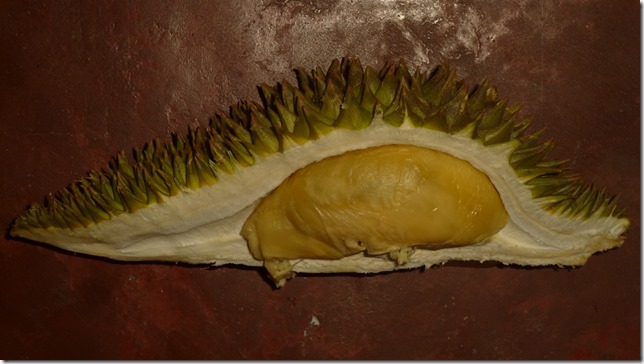 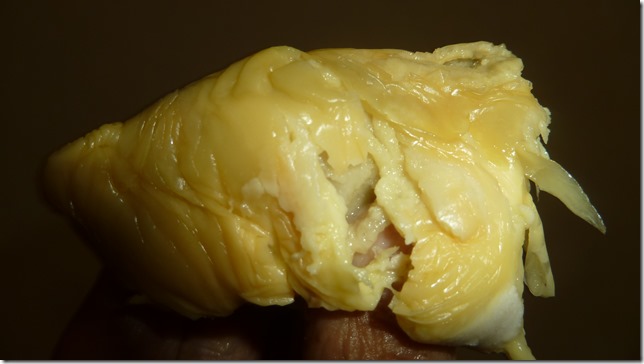 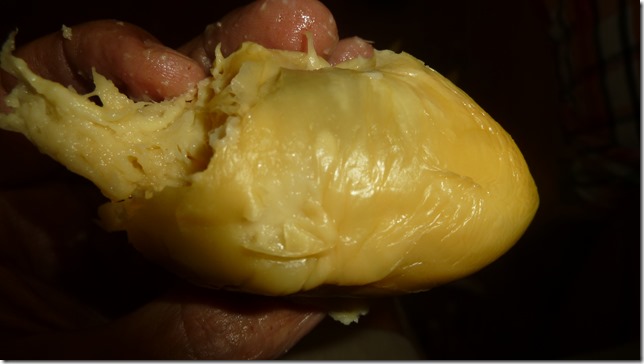 Don’t know why I’m weeping the more – because the pictures almost let me taste it again…or because they don’t quite. Its taste can best be described, I think, as “vaguely mapley-syrupy”. That’s a new one for me; perhaps this is what people mean when they speak of caramel-tasting Durian? The seeds are still here in my room; smell so heavenly, I can’t bear to throw them out. Lordy, but I shan’t ever forget this one. Now I just need to try to find out what the fuck variety it was…

But, anyhow, I was liking what I was seeing from the photos. By the time I’d finished cropping them all, however, it was already 2:00 in the PM – and we were supposed to meet back up at about 2:30 to edit the pics into collage format and then share them with the class.

My first time employing a collage-creation utility, so there was a bit of a learning curve. But, ultimately, it proved the easiest part of the process. Here’s the image I submitted. All of these were taken during that initial two-hour burst — with the exception of the one of the little girl, which was taken a few weeks back, in Little India (I wanted to get at least one shot of a little kid, but was foiled during my few attempts yesterday at bringing one into focus). 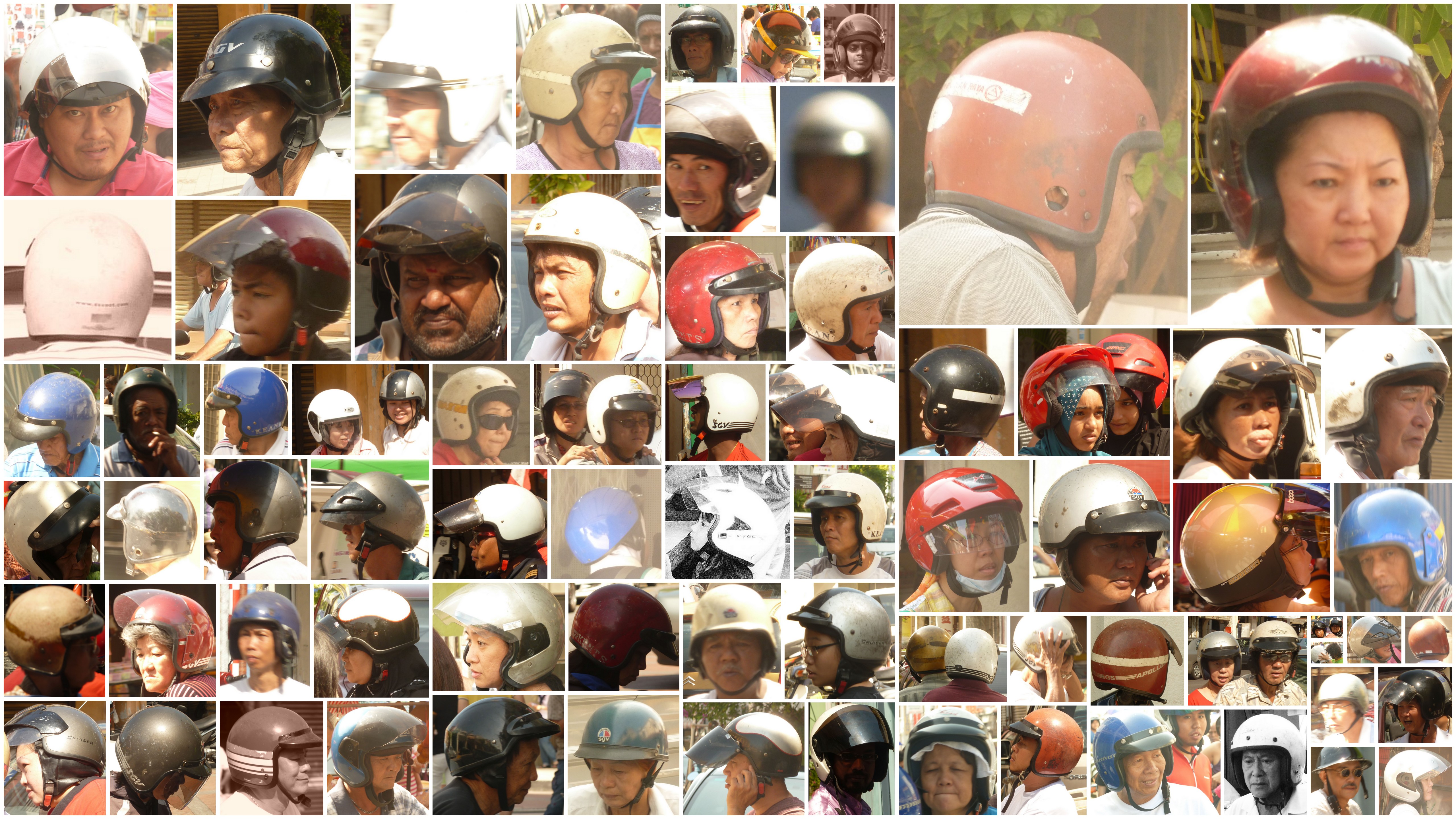 We learnt, during the editing time, that all of the finished images will be housed on the exhibition’s website – as well as printed out and included in the exhibition itself (be still our hearts!). Each and all of the other workshop attendees turned in an absolutely thrilling piece of work. I’ve got my favourites among them, of course, but every single one o’ them is totally beautiful — so make sure, after they’ve been uploaded, to go and have a look-see.

The instructor showed me some cool de-saturation effects slapped onto my collage (my knowledge of image-processing software is basically zilch – but I’m becoming more intrigued the more I actually play around with it). These make the image look more like something Hashim would have produced, so I’m probably going to submit a de-saturated copy to show inside the exhibit.

Meanwhile, here’s a third version, the ultra-collage – more helmets that you could shake a stick. My initial “final cut” of images that I quite liked turned out to include ninety-some-odd pics. As we were supposed to use between twenty and fifty images for the final product, I further cut it down to seventy-three, which is a few as I could stand to use. So here are all of those initial favoured images, plus some that I thought weren’t quite the correct angle, and a few that were a bit too blurry, and yet some more that I snapped after the workshop had finished. This is it, the two hundred thirty-six helmet collage – all save the one of the little girl, mentioned earlier, and one right next to  her of the lady with the visor only, taken on the same day.

Update: Even more photos taken since the above was written. Check it all out at “City Of Helmets“. 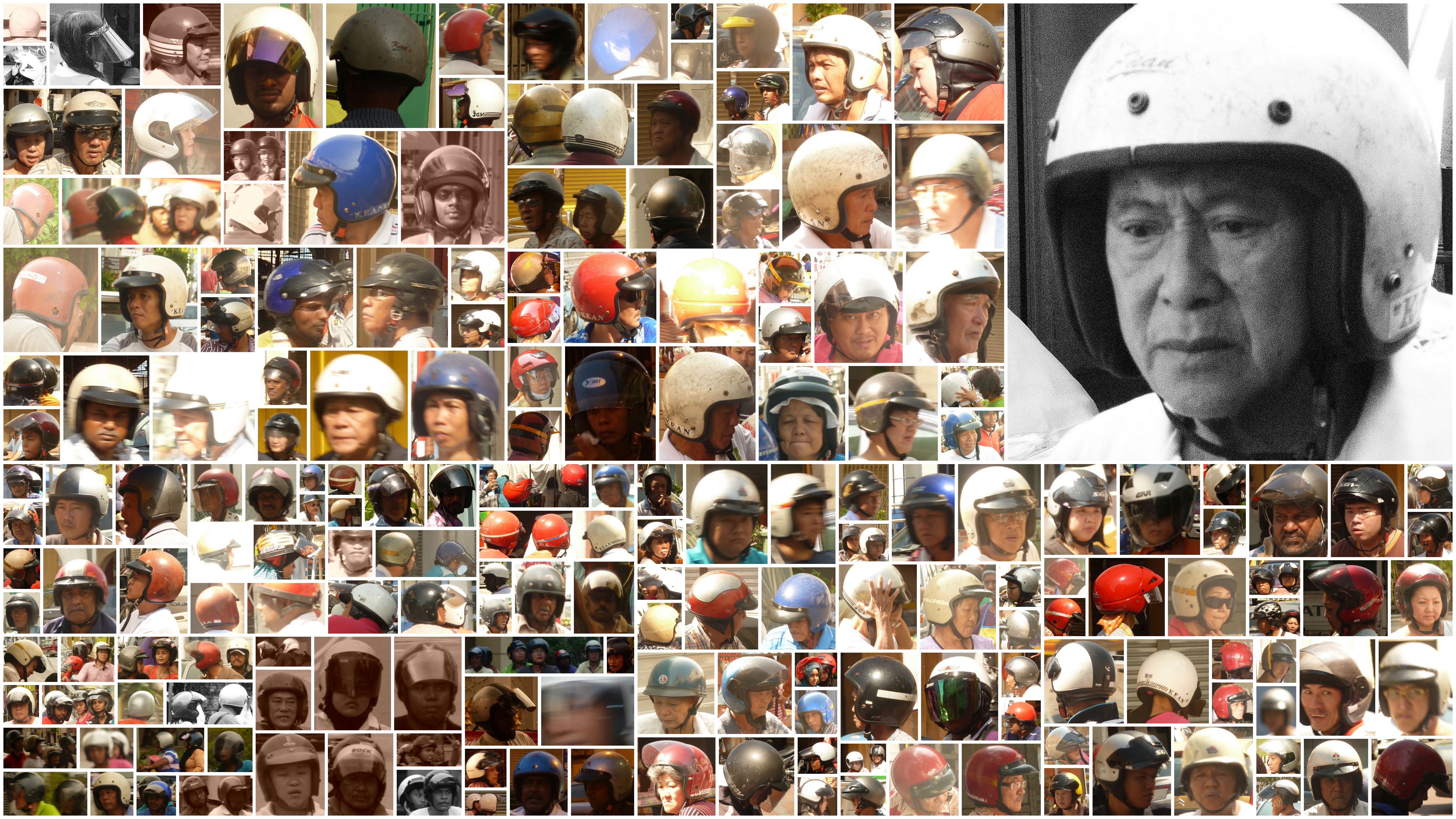 I’ve uploaded full-sized copies of both collages; so make sure to click onto them, zoom in full, and have a gander at the multitude of fascinating faces — for therein lies the true beating heart of the magicus that is Penang.

By the way, though I generally prefer to shoot in black-and-white or sepia, I thought that as there are so many different colours of helmet on display, I should oughta use colour images for this project. Turns out, though, that my favourite of all was the one black-and-white shot I used – thus, I opted to put that one in the collage template’s “feature” slot.

Finally, I note that, looking at the uncropped pictures, a lot of them are very cool – one of the particularly miraculous features of photography, I think: the unnoticed-during-composition details occurring on the margins of the finished image. I’ve uploaded all of the viable uncropped images to the Flickr page (for what it’s worth, I had to shrink ‘em down pretty good ‘cause there are so many of them and my Internet connection is so slow) – including a bunch whose helmets didn’t get included in any of the collages, either owing to blurriness or to them being duplicates of a driver from whom I used a different shot. Lots of the unused ones, also, were taken in the gloaming, so it was impossible to get a clear enough blow-up, even using the camera’s highest resolution setting – too bad, as the subjects in most of these are very interesting indeed. (Some of these I would love to see in black-and-white — but for now, at least, no time to get to that particular project…)

Here are some of my faves. Super-huge thanks to Meng and Pein, the instructor and one of the project’s coordinators respectively, for a great fun and hugely interesting day’s play. And, as always, thanks to Penang for being Penang – one of a kind. (And lest we forget: thanks to my wonderful little pocket camera, which after lo these four years of abuse, mismanagement, and stupid obsessions, still keeps spitting out one beautiful image after t’other!)

Oh, and a big, fat, huge n.b.: If you can make it to George Town by the end of this month to take in this Hashim exhibit, then by all means do so. If not, though, mark your calendars for February, when it will be re-opened, in expanded form, in KL. Hashim was a major talent whose body of work is of inestimable value. Having been exposed to it up close, you’ll forever be haunted by his indelible imagery. To stay in the loop, follow Fergana Art. 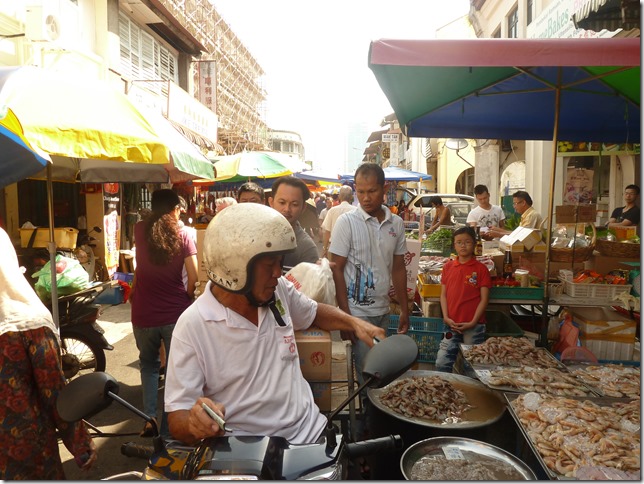 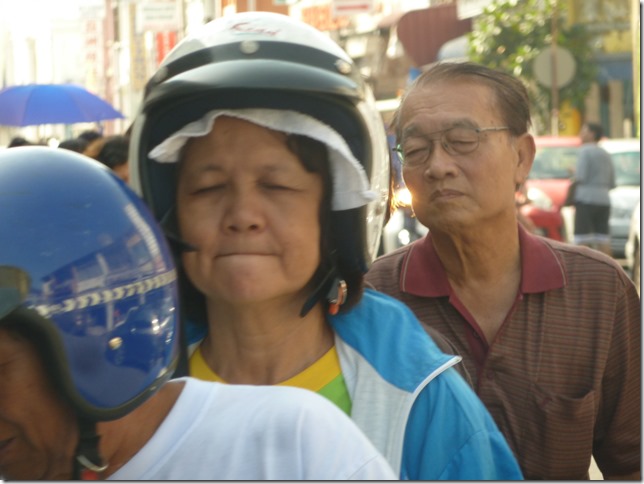 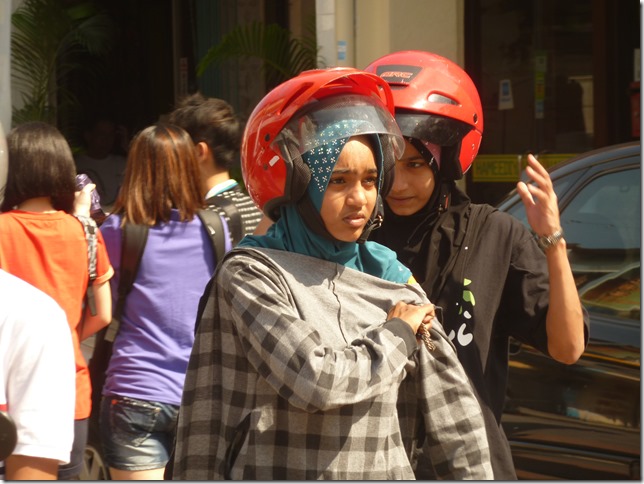 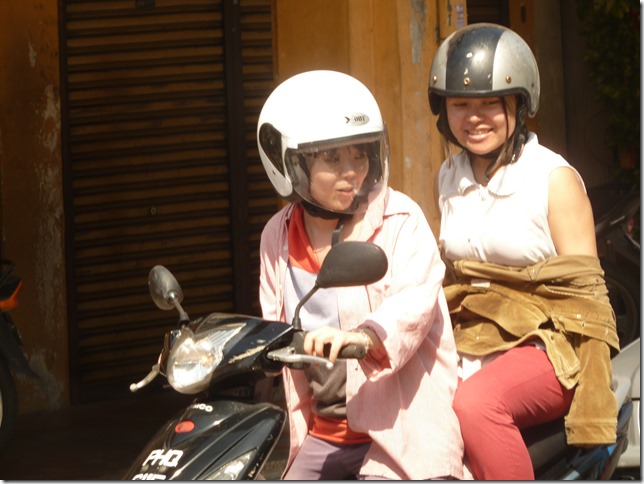 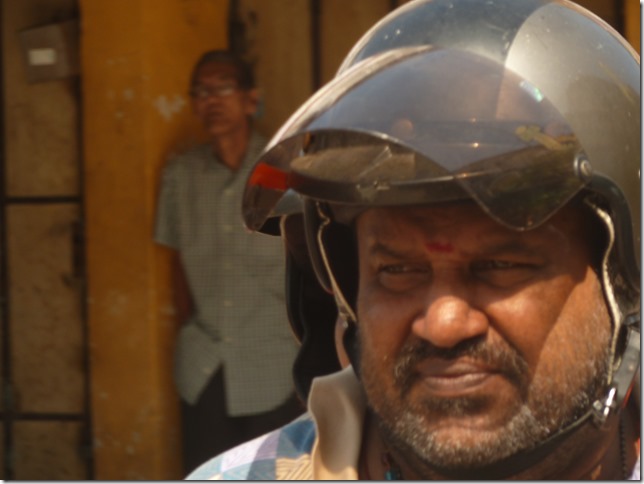 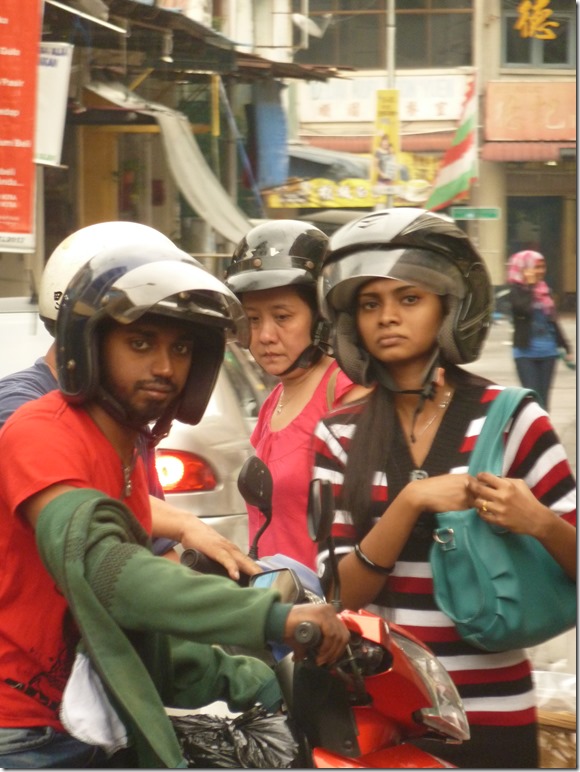 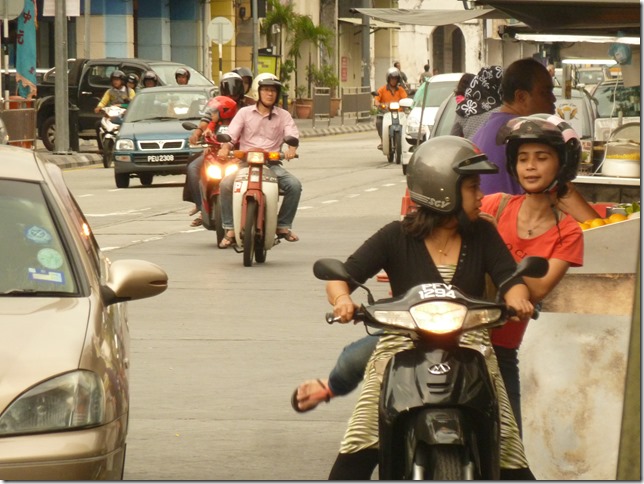 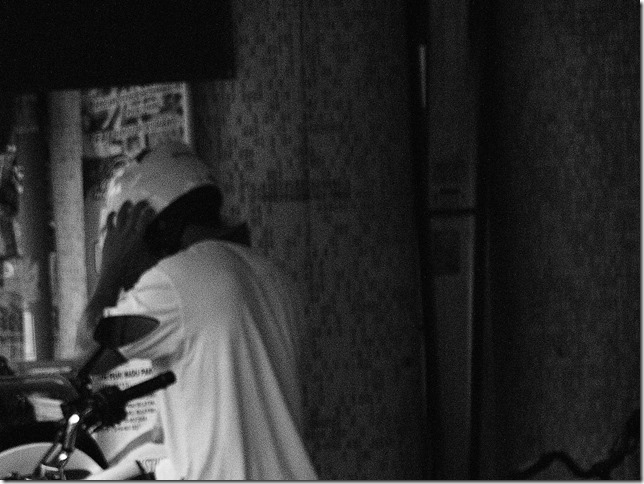 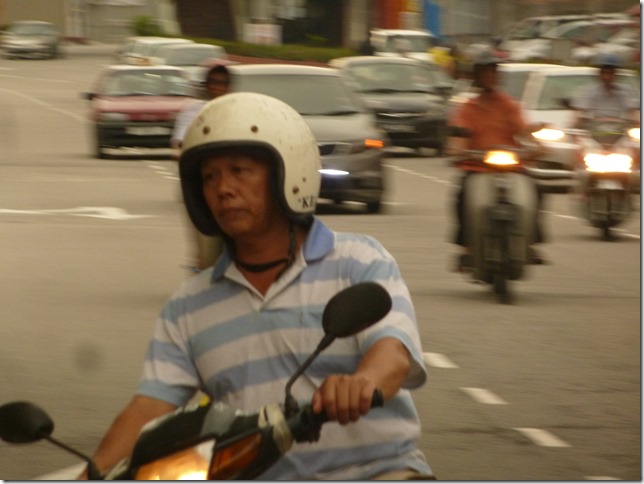 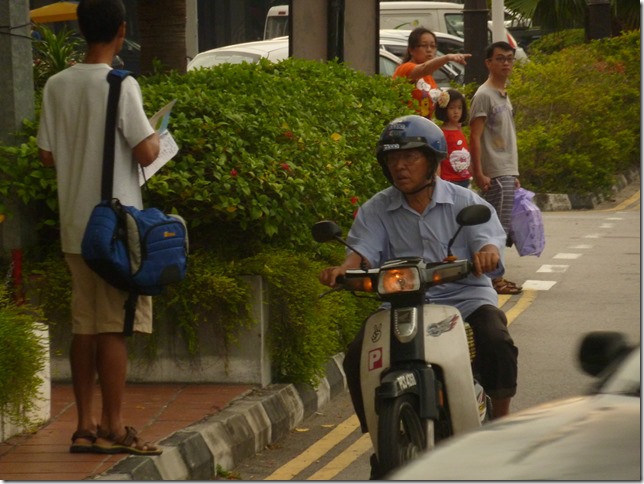 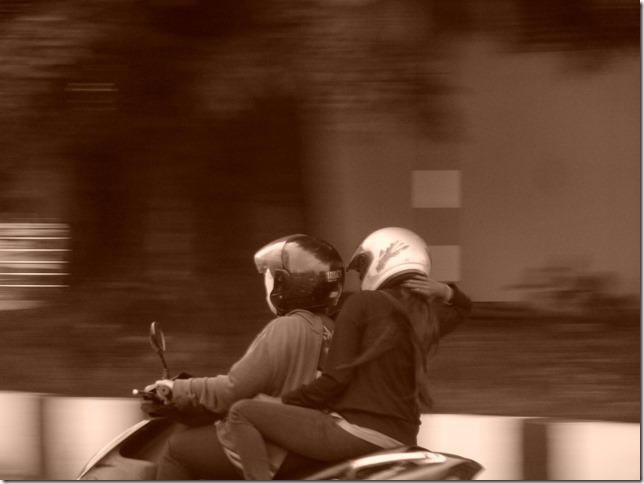 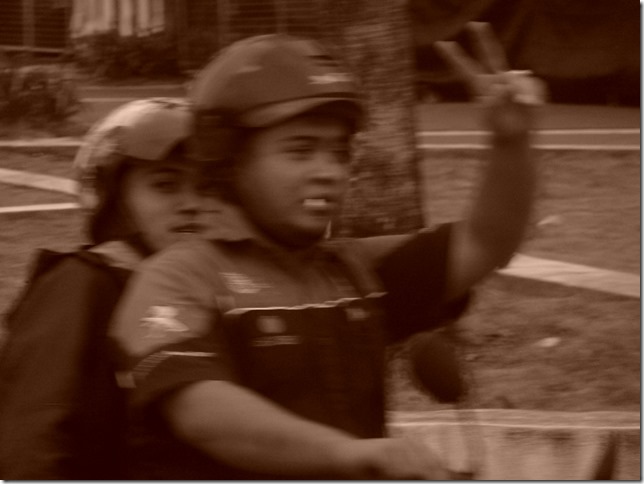 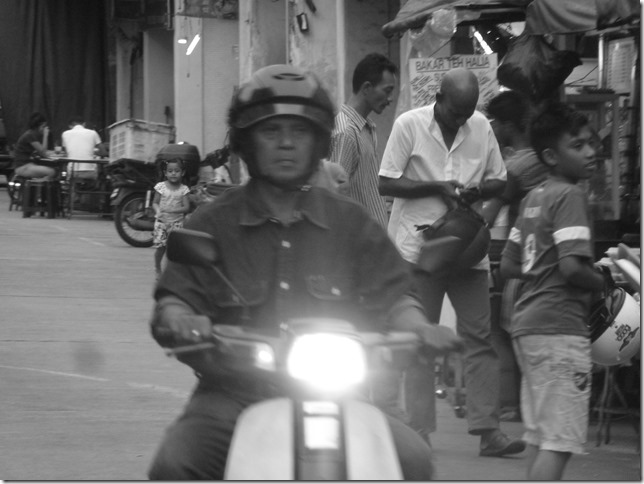 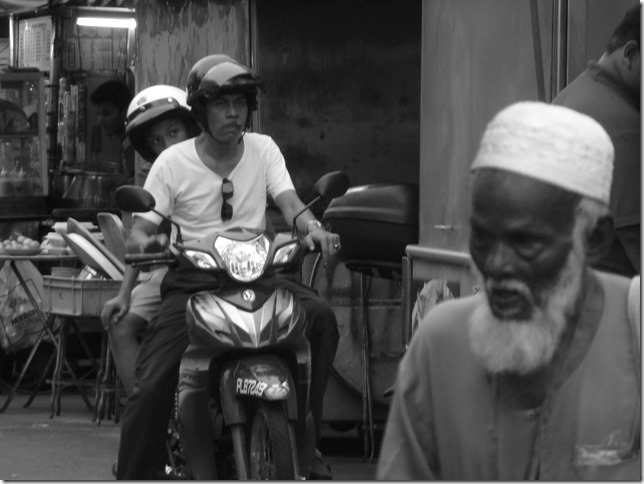 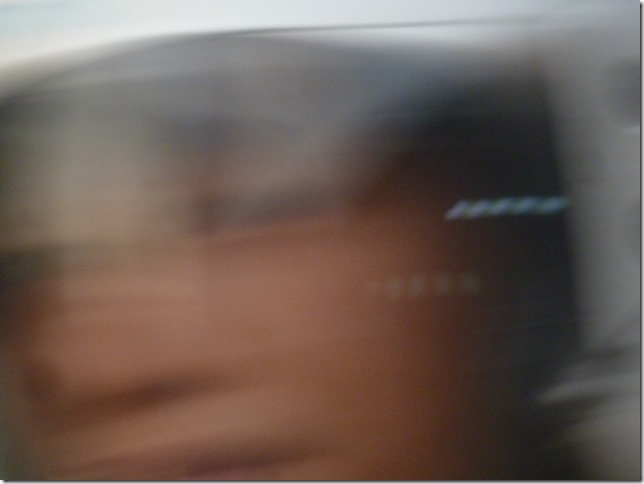 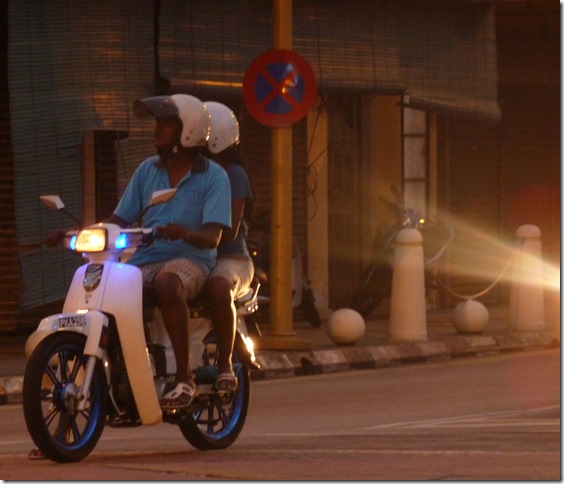