Well, the Monsoon has finally arrived – and with a vengeance. We’ve been getting absolutely raked by rain for most of the last thirty-six hours. Fine thing, though, that it let up throughout the afternoon and early-evening yesterday, allowing for some fun good times in the out-of-doors.

And I say, Chanthaburi could just as easily be called Enchanthaburi. The place is just so damned much fun. It could also be considered as Wonderland: It’s visually stimulating… 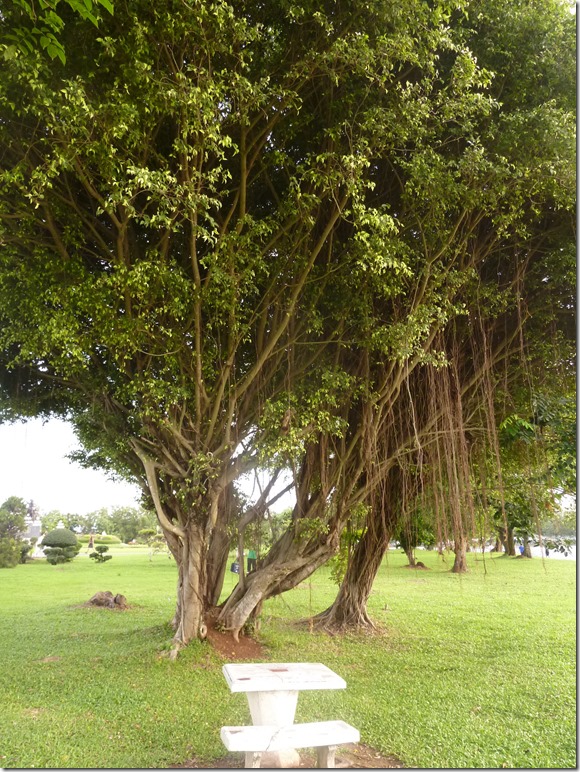 …its Durian may melt your brain, wacky characters abound, it’s obsessed with Rabbits, and it’s as surreally goofy and crazy-wonderful as any city in Thailand — or probably in the World.

I’ve written similar words before now (see here and here), but, there’s just something so captivating about this town and its denizens. Difficult to put one’s finger on the phenomenon. Think it has something to do with its seeming like a blue-collar town, or like a town that is trapped in the recession-era ‘70s – even though considering its importance in both the gemstone and Durian trades, there must be quite a lot of money here.

There seems to be more less zero acknowledgement of the possibility of farang tourists: the few hotels employ only non-English-speaking staff, it’s impossible to rent a bicycle, its main event – the Festival – is strikingly devoid of white faces. And yet, the townspeople are not only quite friendly toward farang, but very inquisitive as well.

Some few of the interactions over the last coupla days which have tickled my fancy like nobody’s business:

· Festival Rambutan vendor screams this post’s eponymous exhortation at me, right through the big crowd of people between us.

· Dude pulls his motor-car over in the middle of a busy street, gets out, opens the hatch, grabs a basket of Mangosteens, and offers them to me. I tell him that, in fact, I’ve already got several kilos’ worth of Mangosteens in my bag. He doesn’t seem to believe me, ‘cause there’re some Cucumbers stacked on top of them. So I remove the Cucumbers, he sees the light, returns the Mangosteens to his motor-car, explains, “I have a garden,” and drives off into the night. 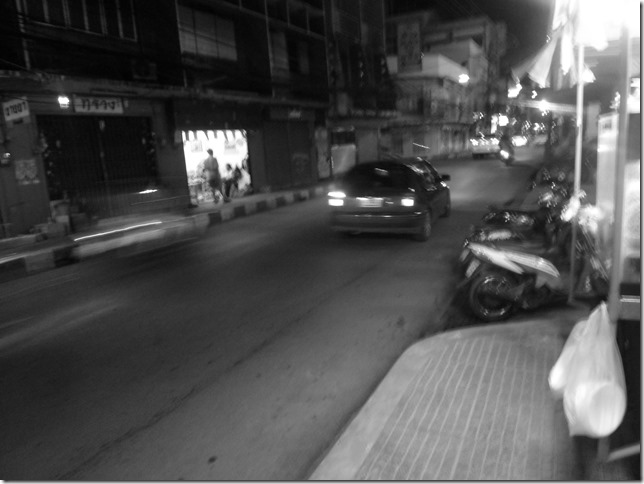 · Indian guy in the park flags me down, shows me his variety of coloured nuts he’s toting around, repeats several times, “Never illness…always healthy,” while motioning to the nuts, and tries to sell me a quantity of them for ten Baht. I vehemently argue that it’s not his wares that will keep me illness-free, but rather Fruit!, and lead him to my stash of Mangosteens and Mangos. He asks for a Mango, I reply, “Sure, no problem,” and make to hand him a Mangosteen instead. He refuses that, and again insists that he’d like a Mango. Okay, ten Baht, I tell him. He now pretends to not understand a word I’m saying, as I repeatedly try to get him either to give me some free nuts, or to pay ten Baht for one of my Mangoes. Finally, he very sarcastically intones, “Thank you very much” a number of times before getting on his bike and riding away. Fucking priceless! 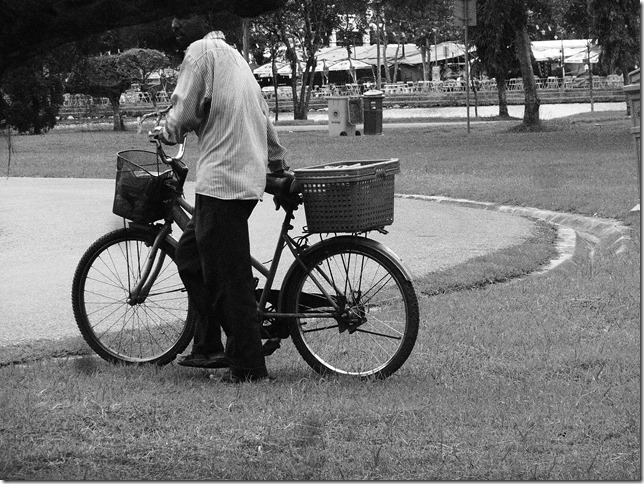 · Older gentleman (sixty-three, it turns out) in the park takes a break from his daily exercise to ask a bunch of questions. Among them: Why had I come to Thailand? (“Durian!”) To where will I travel after Thailand? (“Malaysia.”) Why will you travel to Malaysia? (“Durian!”) “But…I don’t understand this. Why are you traveling for…Durian?” “It’s the King Of Fruit!” Satisfied, he asks which of a list of other fruits I enjoy, seeming to take no heed when I note that I do not like Rambutan. After another bout of exercise, he returns to ask a lot more questions, finally haltingly, awkwardly coming to, “Sorry…do you mind? I would like to know…why you…” Surely, I think, he’s going to hit me up for 20,000 Baht, or such-like. Instead: “Why do you not like Rambutan?” I explain it to him, that it’s a royal pain in the ass the way the skin of the seed sticks to the inside of the flesh – and it turns out that he disapproves of the Rambutan for the very same reason! All that trepidation, the stress and nervousness, the anomie, the social awkwardness, the fear of possibly creating an International Incident…and it turns we’re in complete accord! 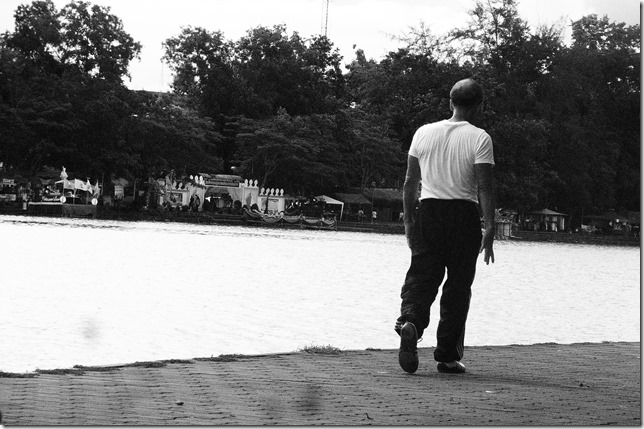 · Three taxi-drivers in the Market area call out to me as I’m walking by, “This morning you were wearing choes…now, you are not wearing choes? What happened to your choes???” I show them that my choes are in my bag, and it’s as though the weight of ten thousand suns has been lifted from their shoulders – such was their anxiousness at my apparent pedestrio-bipolarity. 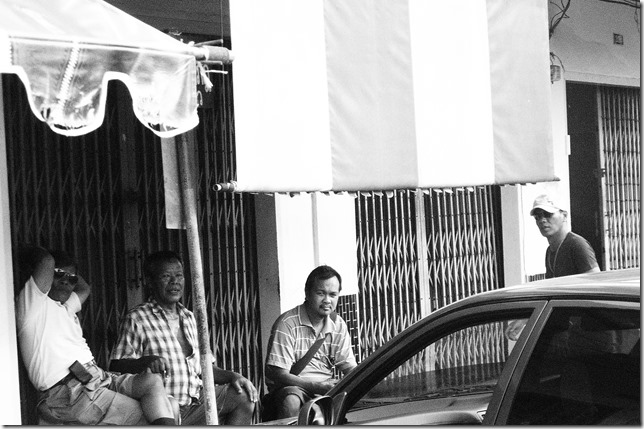 · And, best of all. Juggling in the park, and a gentleman with a nice, big SLR approaches, requesting to shoot some photos. Knock yourself out, I tell him. Not long after, a massive throng of schoolchildren, apparently out on a field trip, excitedly gathers ‘round to watch, and after a bit spontaneously bursts into polite-yet-enthusiastic applause. (Same thing happened in Vientiane before – but there weren’t nearly so many kids then.) After a little show, I offer to shake one of the kids’ hands, who is a bit too shy, but then the next one accepts, and its off to the races: as I realise that I’m going to need to shake the hand of every last one of them, I begin to wonder if I might end up here all the day long, shaking the kids’ hands over and over again. But they’re very kind about it, each satisfied with only a single handshake, and sooner than later, I’ve finished. Later, they turn up at the fruit-eating competition, recognise me, and excitedly wave and endlessly call out, “Sawadees”.

Wow, one of the coolest, most thrillingest experiences ever! I did, before it was all said and done, hand my camera over to the photographer-dude, so here are pics from my camera (the B&Ws) as well as his (the colours). 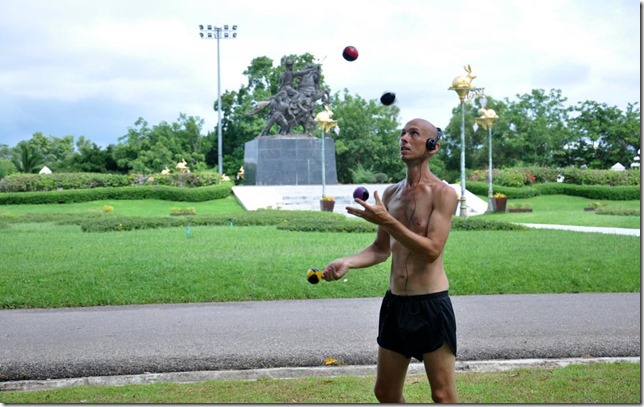 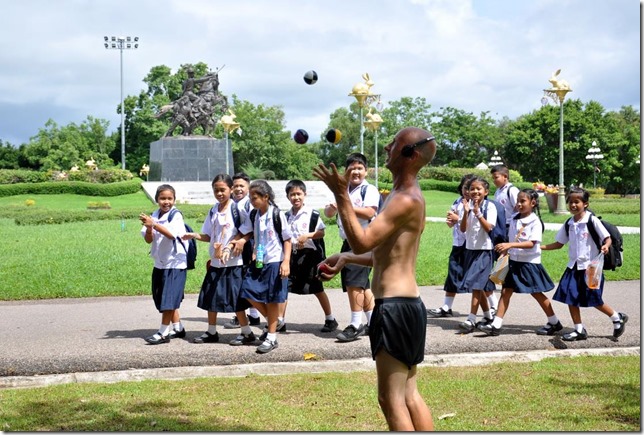 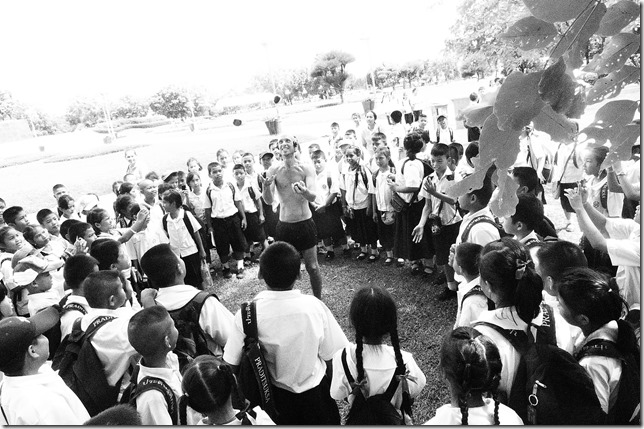 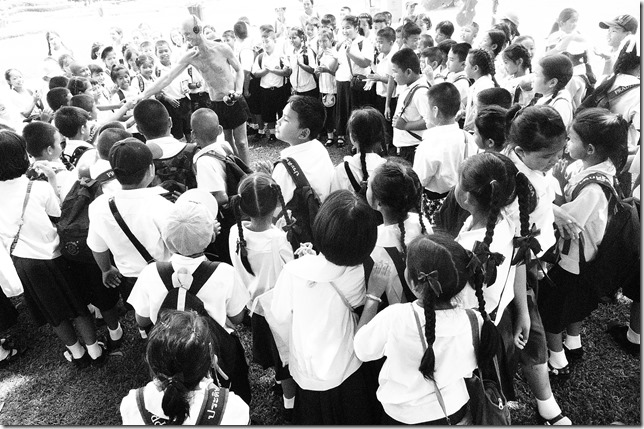 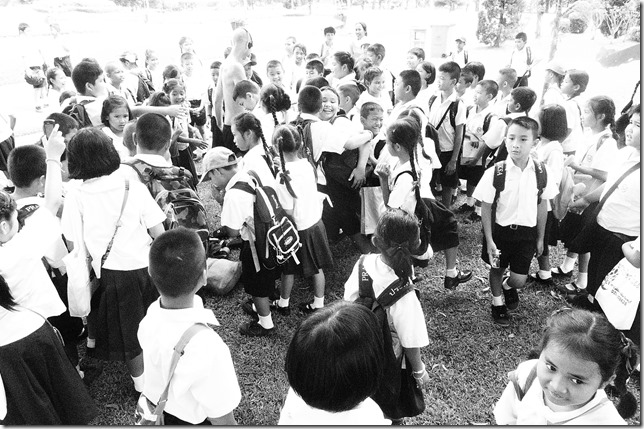 Telling you, if, when traveling, you would like locals to talk to you: take up barefooting, and take up juggling. Works a frickin’ treat.

In Festival news, had a gander the Fruit-Eating Contest a few days ago. Two Fruit Friends participated: Lena from Switzerland, and Juliet from San Fran. I took footage with both my own and Lena’s cameras. Here’s the former. All the kids are the same ones from the juggling adventure. One can readily see how much livelier the scene is with them involved!

After the whistle, the contestants’ plates’ remaining contents were weighed up… 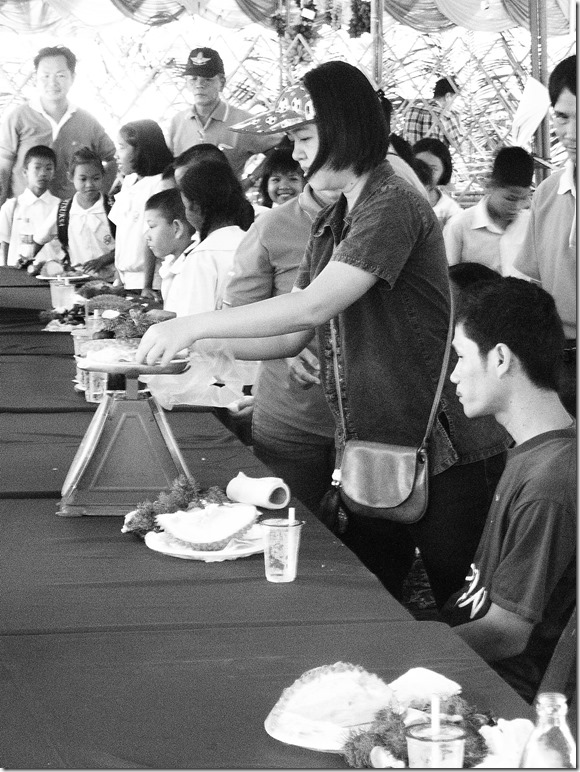 …the results were recorded with care… 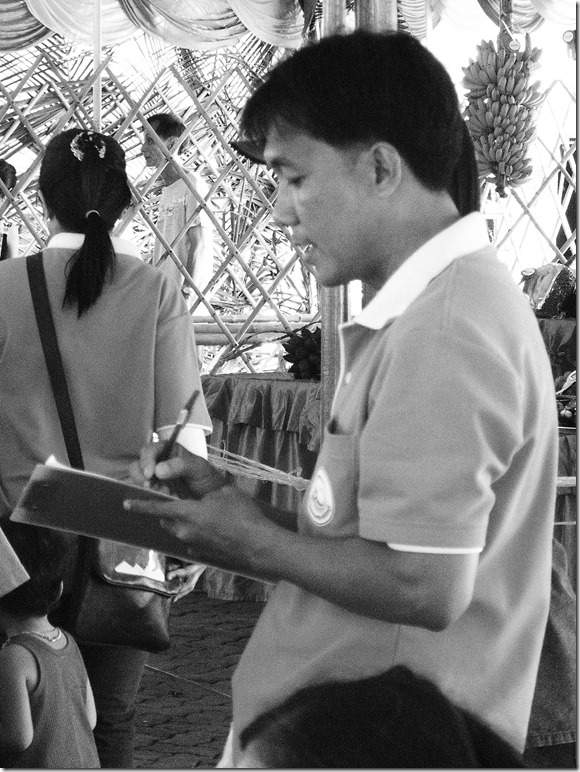 …and t-shirts were gifted to the top three finishers. 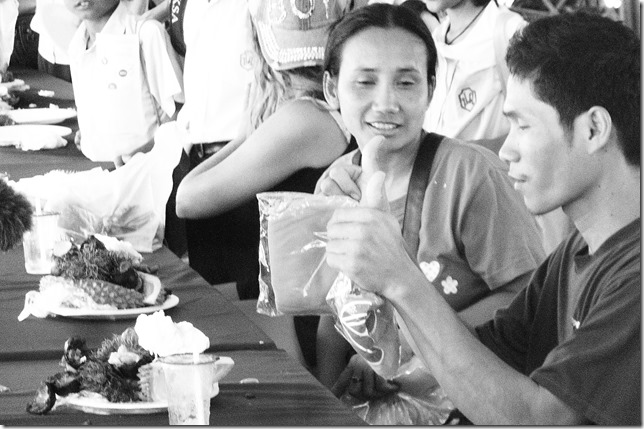 The farang contingent didn’t fare so well – Lena showing so poorly that the proctors didn’t even bother weighting her plate at the end.

In other Festival news, couldn’t help recording more footage of my favourite Propagandistic Orator since Ronald Reakan. You’ll see her get kinda spooked by the camera for a bit. Otherwise, it appears that she’s been warned that if she pauses for even the slightest of moments to take a breath, that surely she shall perish. This, right here, is unvarnished Pop-culture gold of the purest quality.

But this, this next clip, is Platinum Standard. I very humbly submit that you will never in your live-long life screen a more wickedly, deliciously, wonderfully depraved two-minutes-nineteen-seconds’ worth of footage. This clip will make you wonder aloud, “What…the fuck IS this place – this ‘Chanthaburi’? This place is fucking…the awesomest, is what the fuck this place is.” (Or if it doesn’t do, then you may want to consider changing your dosage.)

You’ll swear to your grave that the music can’t possibly, in ten million years, be diegetic – but I swear to all gods living or dead that it is. Oddly, rather than the most insanely appropriate background music you ever would have seen, it sounded at the time way too loud and garish; and I was sure that it was ruining the video. (The reason I stopped filming, in fact – though it turns out to be just about the perfect length.)

With the music, it looks like either a montage from a ‘70s-vintage after-school movie, or like a PSA shot by David Lynch shortly after he woke up and decided to forego his meds. Enjoy!

The Festival entertainments are still quite pleasing. Here’s a middle-school school band (I think) featuring this rather curious percussion instrument.

They jammed for a good thirty minutes after this, before bringing out the dancing girls. These kids are good! (The choreography for the number following this one was truly spectacular. But, like an eedjit, I didn’t properly engage the recording device, and so was sitting there for five minutes’ time pointing the camera at them without filming anything…)

There’s another stage all the way the other side of the lake from the Mainstage. Not a-gonna say this is the greatest band of all times. But you gotta admit that: a) They’re infectious as hell and b) The drummer is pretty damned great.

If it sounds reminiscent to Dengue Fever, well, we’re only about an hour’s drive from Cambodia here, so…yeah, it’s possibly quite apt:

Actually, what I don’t remember from two years ago is how great the music is around town. Mostly, it sounds like it would be old-timey Thai Pop numbers – heartbreakingly gorgeous — and coming from lo-fi sources like cellphone speakers (or what), which makes it that much more delightful to listen to. Have only a few examples (and not even really what I’m talking about), though, because it’s often difficult to get close enough to the source for the camera’s mic to pick it up at all. (Or, like, when it’s windy enough to fuck over the recording, or something.)

This dude, I gather, is a Parking Lot attendant. Has great taste in radio stations!

This street musician is Thailand’s answer to Jeff Healey. Might actually try to take some more footage of him – magnifique!

Okay, a few faces from Chanthaburi. I feel that one could take up permanent residence here, and spend all day every day just noticing the people. So much (unintentional) elan here, so much wonderful life, it just blows the mind. Goes without saying, o’ course, that there are hundreds of times more whiz-bang moments than one ever has an opportunity to photograph. It’s true anywhere one travels, naturally. But it’s more true here than possibly anywhere else I’ve visited. 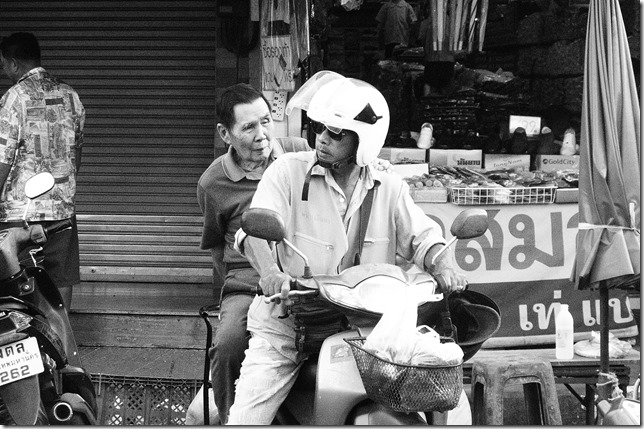 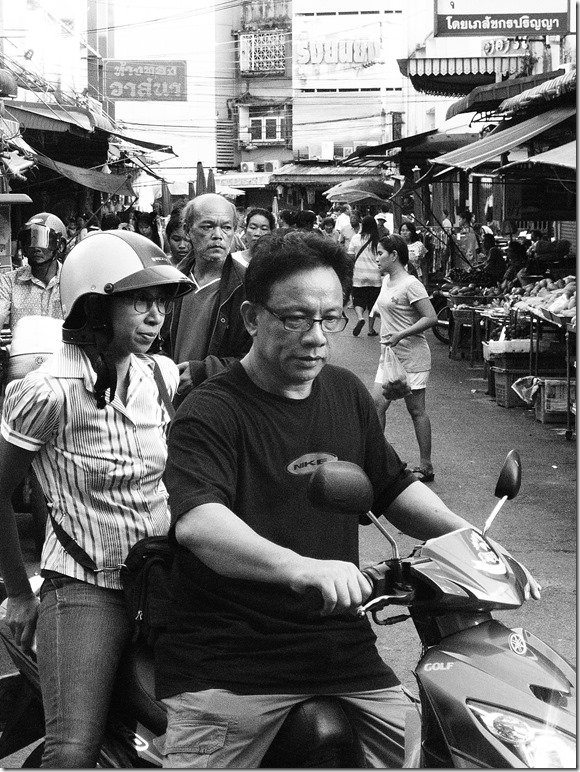 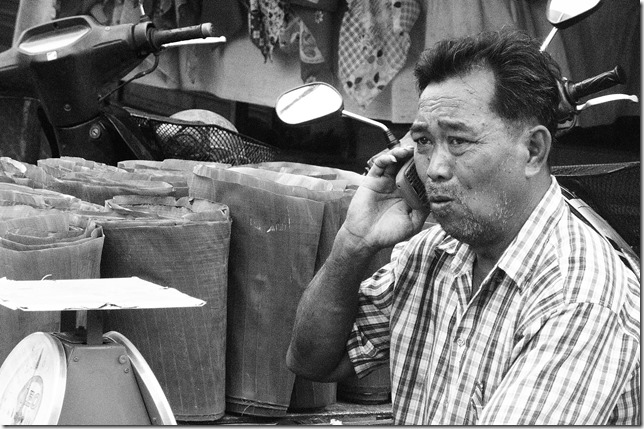 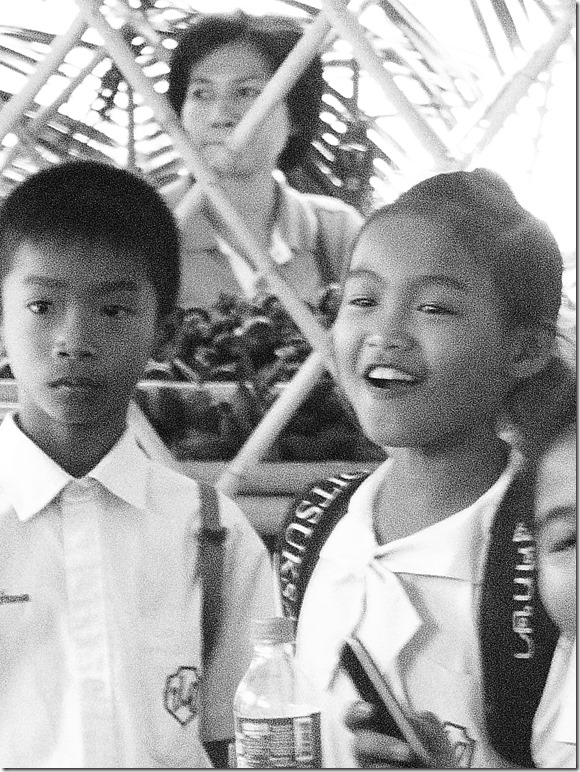 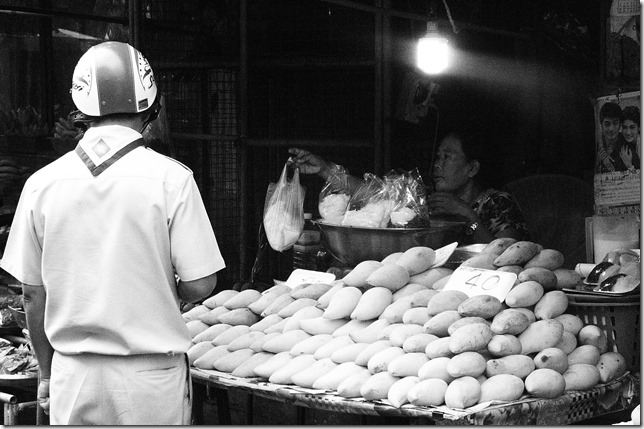 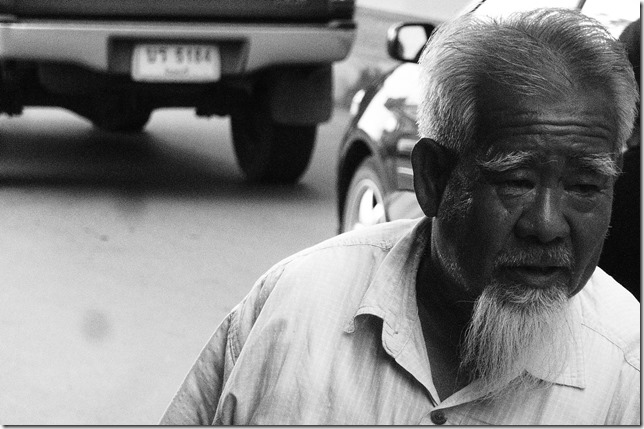 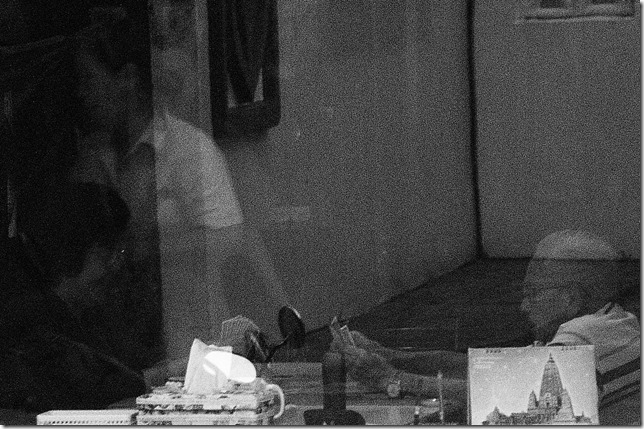 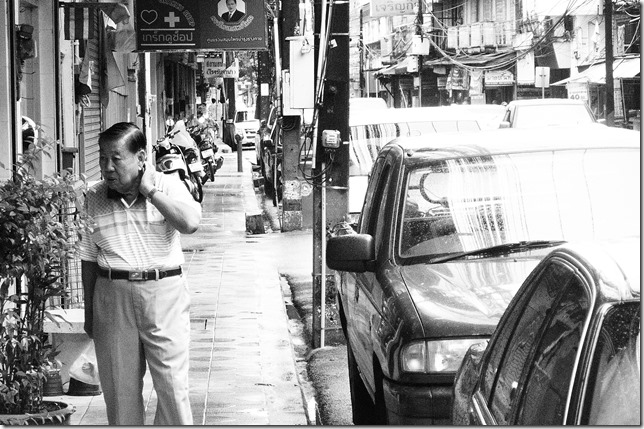 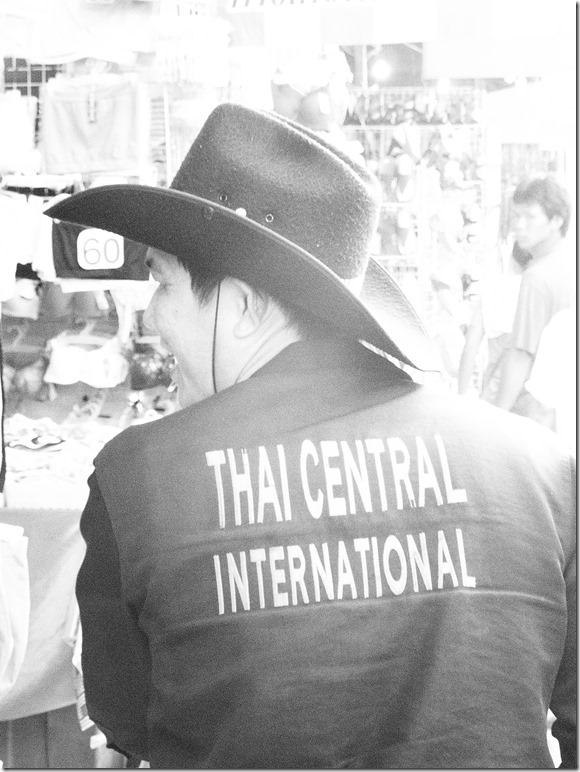 The Animal Kingdom is not precluded from numbering representatives amongst the city’s myriad of imperially intriguing residents. Oh, no. For, check this shit. Was walking with my Norwegian Durian-fiend bros Mads and Mikkel, trying to roust from their places of hiding others of our ilk, and passed a little line of shoppes, with some patio furniture outside by which the shoppe-owners may relax and escape the heat, and all. And who’s there lounging on the sidewalk next to them, but a fucking 490,000 pound hog! What…is this town, this “Chanthaburi”?

On our way back through, it’d decided to take a stroll in the patch of woods on the other side of the soi.  Could you believe how fucking enormous this thing is? But also, note how fucking excited it is to be alive on Planet Chanthaburi! Who in the Sam Hill wouldn’t be? 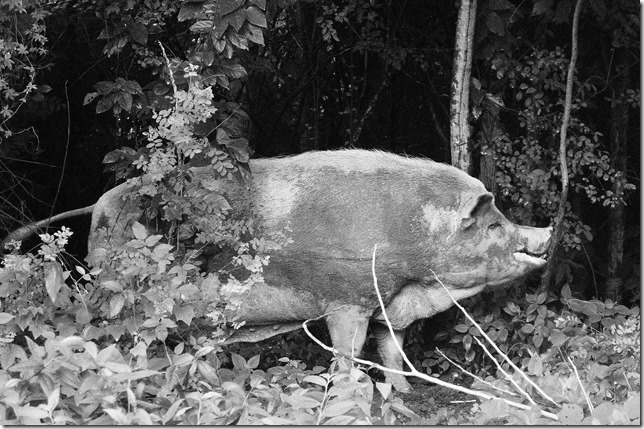