Ed. note: Looks as though the Internet situation here in Chanthaburi will be very not good. So, the footages I’d intended to share with this post will have to be delayed to a later time. Please thus ignore, or place on hold, all references to same.

Update: Internet situation not as dire as initially supposed; vids now embedded below!

In Chanthaburi now, following two 4.5-hour bus rides and a 15-hour train ride. The latter actually left Chiang Mai two minutes early, and arrived in Bangkok only about fifteen minutes late – both to my great shock. Maybe there’s something to the old Fascists-making-the-trains-run-on-time wives’ tale after all!

Very sad to leave Northern Thailand — and its Mangoes, Lychees, and Watermelons — behind. (Since my last correspondence, the Mangoes have re-achieved, or nearly so, their former glory.) Of course, to replace them with Durians, Mangosteens, and Longkongs – not such a bad trade. Mangosteens are a bit pricier and less abundant than they ought to be for this region and this time of year (presumably owing to the unusually hot/dry conditions); but, Lord have mercy, are they fucking great! 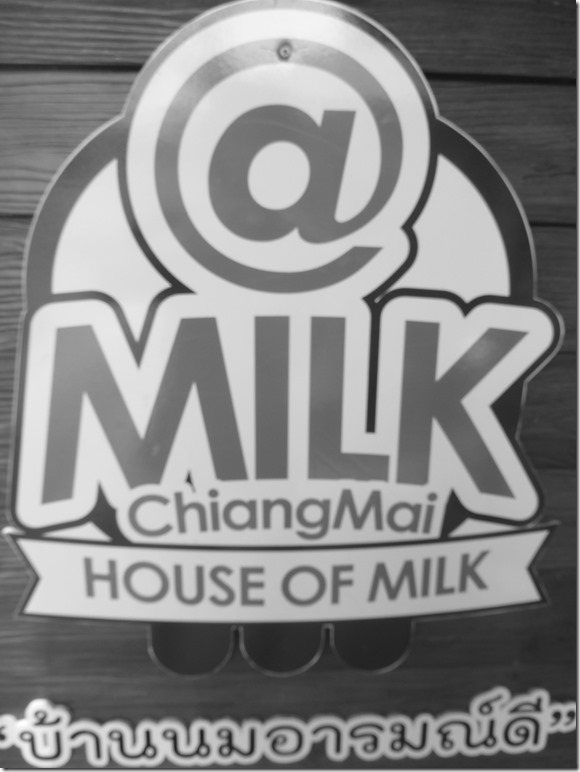 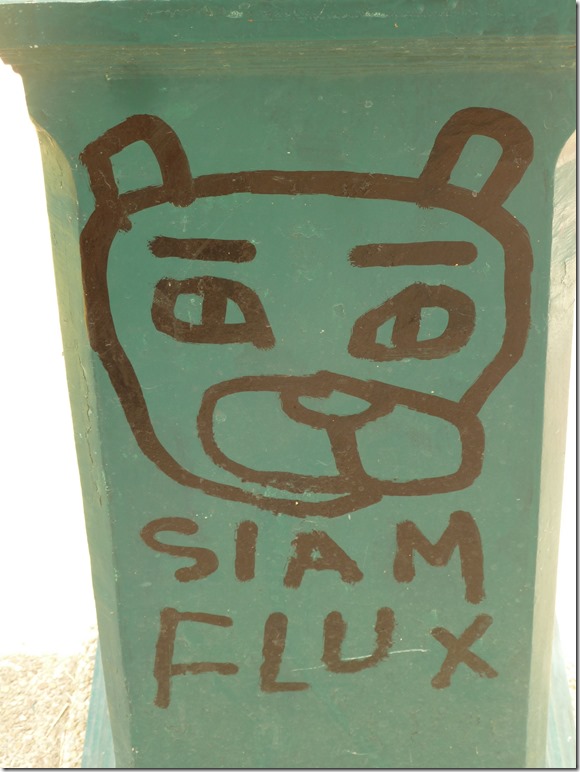 Well, I guess the second one’s more cool than it is funny. This one is from day two of the City Pillar Festival: 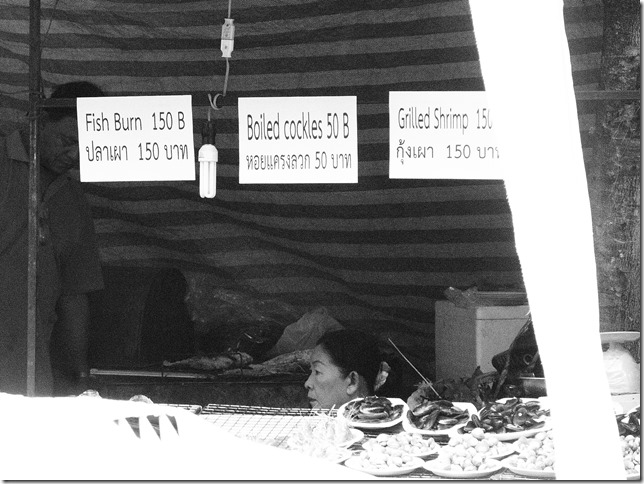 Also, did manage to get some nice shots of the temple all lit up at night. (Can never keep straight the names of the various structures on the temple grounds. I think the main prayer hall is called the “Ubosot”.) 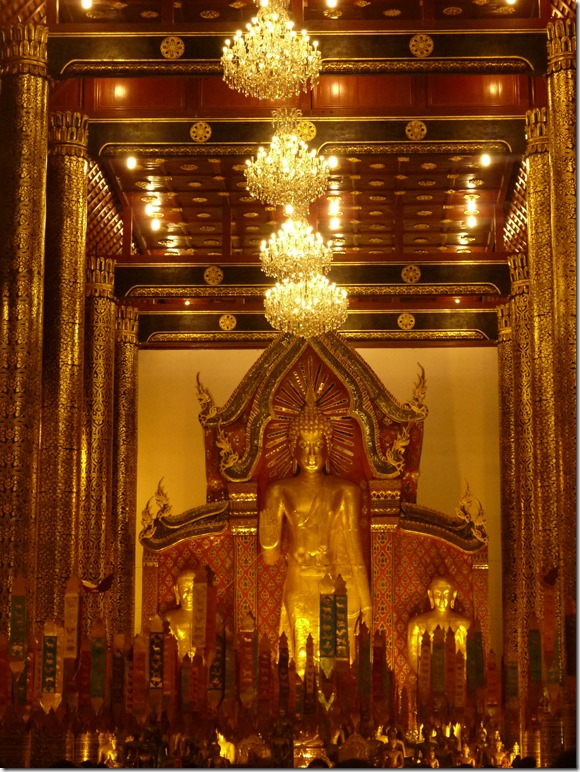 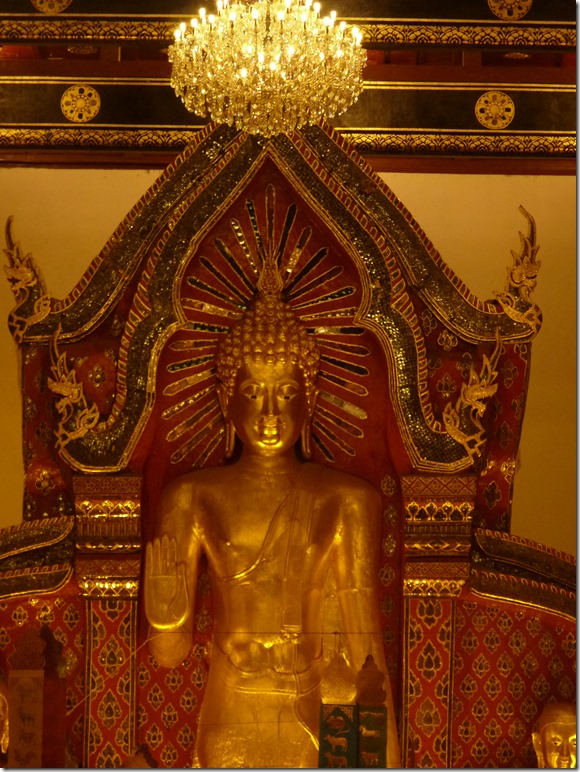 I know I keep going on and on about how gorgeous Chiang Mai’s temples are, but it really is true. Chedi Luang, the site of the Pillar Festival, is near the head of the class. Even the ancient, Khmer-style temple on the grounds is a knockout. 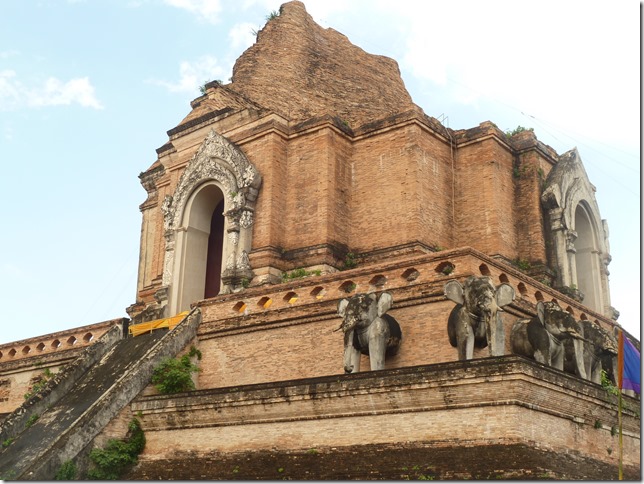 How to learn Buddhism? Well, for one, be ready to sweep away the water after a mid-Afternoon rain squall. 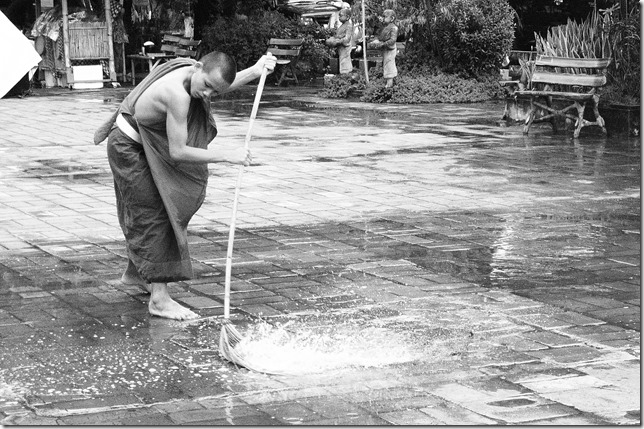 The second day was much like the first, but without the pomp and pageantry of the parade. Here’s a bit of the goings-on over at the Pillar itself. Mostly, I just like the pretty chantings of the monks.

There was also a traditional dance program in the evening. Only took a little bit of footage, as I just can’t get into dance routines set to canned music. But, here’re a few seconds, for a little taste.

So, that was Chiang Mai. Now, boy, if you wanna experience Northern Thai lifestyle, up in the mountains and away from the tourist throngs, skip Pai outright and head up to Mae Sai instead! (Kind of ironic, given that there are loads of tourists using the easy fifteen-dollar/out-in/no-visa entry into Burma to load up on thirty more days visa-free in Thailand. But…they leave the actual town to its own devices.)

Mae Saiians are possibly the friendliest of all Thai townsfolk – and that’s saying a lot. The mountains are beautiful. There’s a nice, peaceful little park down by the river. The motorcycles, while still annoying, are much less burdensome than in Chiang Mai or Pai. There are hiking opportunities. Massive storms roll in in the evenings. The Night Market is every bit as good as Chiang Rai’s or Pai’s. The Lychees are bumping. What’s not to love?

First evening there, went up the mountain to visit the Scorpion Temple. Where do these two rank in the list of World’s Longest Naga, I wonder? 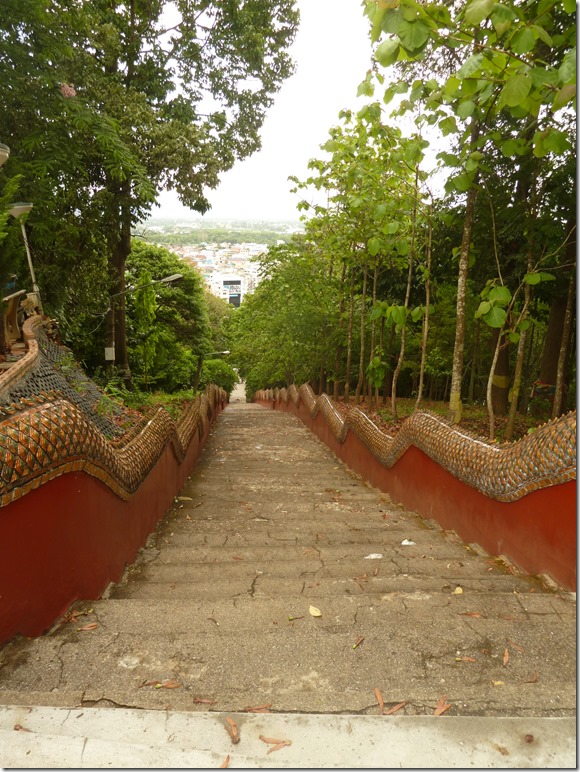 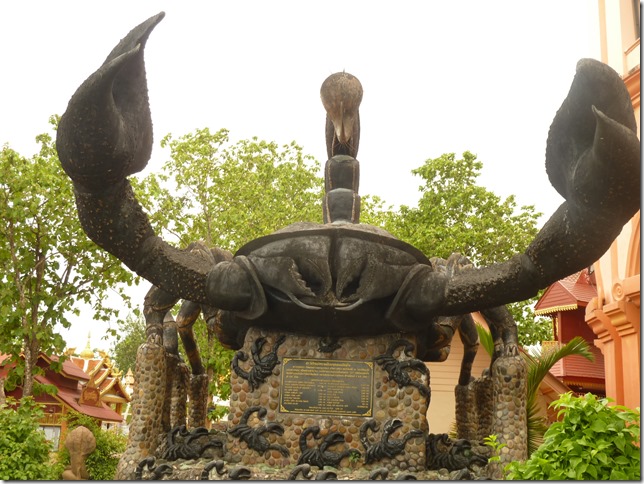 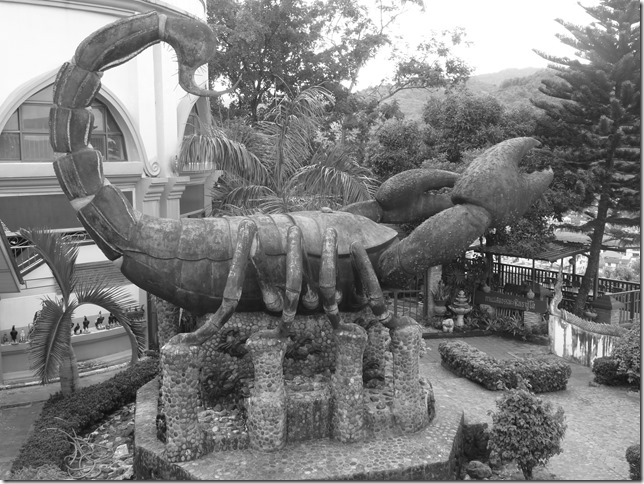 And some cool/weird Prayer Balls (or what). 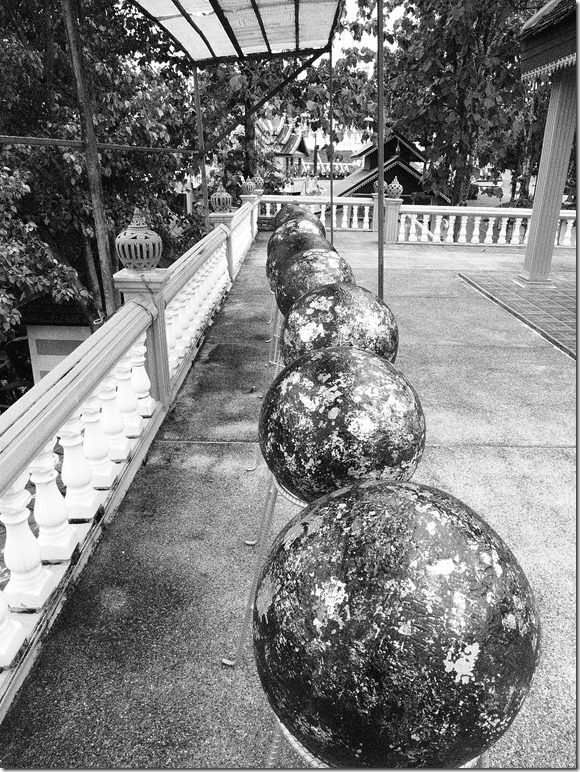 Very peaceful up here (unless you don’t fancy the Cicadas’ call), with an incredible view. 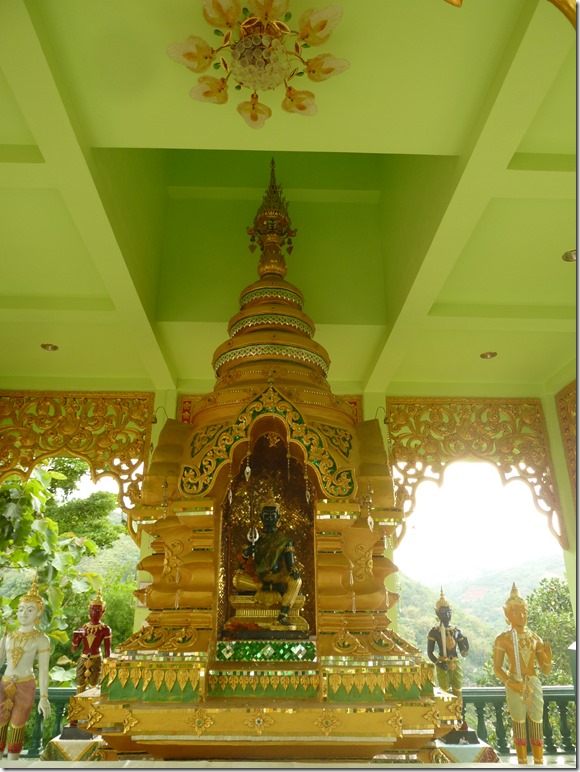 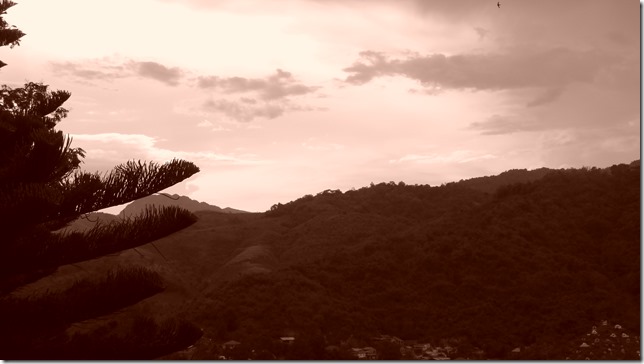 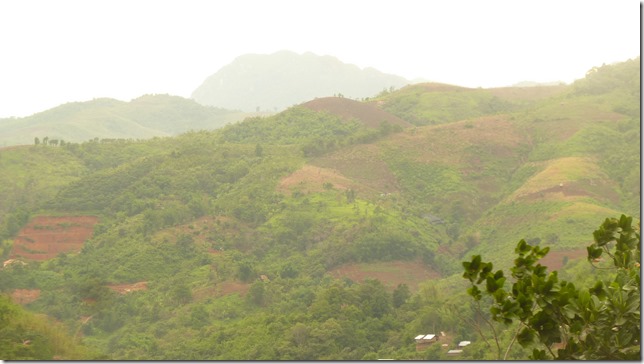 Had intended to check out this Cemetery on the Burmese side, but then it totally slipped my mind. 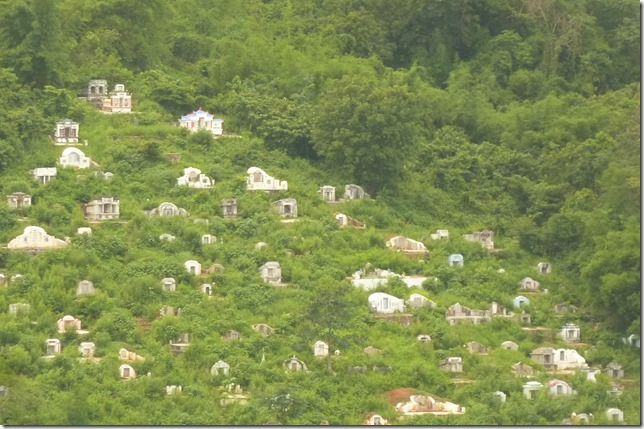 Unfortunately, the mosquitoes began showing their stoopid faces, forcing me to beat a hasty retreat before I was ready to do. May’ve stayed up there all night otherwise, such was the enchanting nature of the surroundings!

Next morning, made the run into Tachileik to have a look around. There’s a very sleazy Border Market right as you enter; you can’t even beat the cigarette/Viagra/prostitute sellers away with a stick. At one point, three of them had me surrounded, and I held up my arms in a big X screaming, “You guys are crazy!”

One of them took offense, and spat back, “You are crazy!” But, they left me alone after that.

I dunno. I wasn’t so enamoured of Tachileik – though the temples are both numerous and impressive. 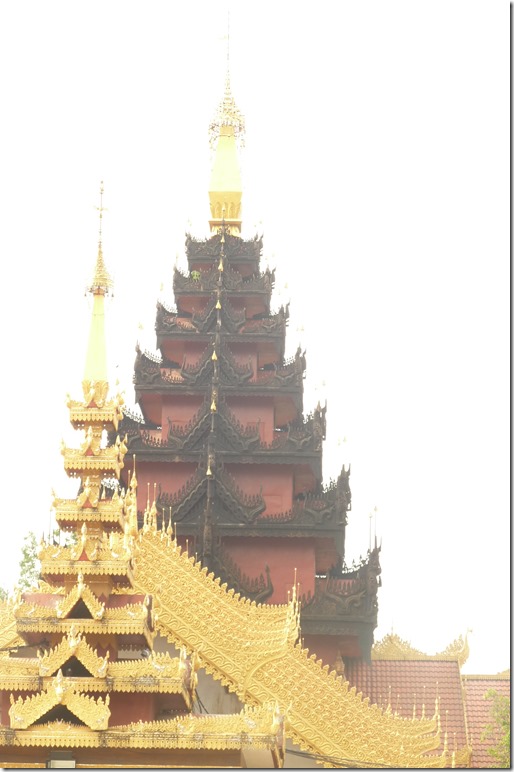 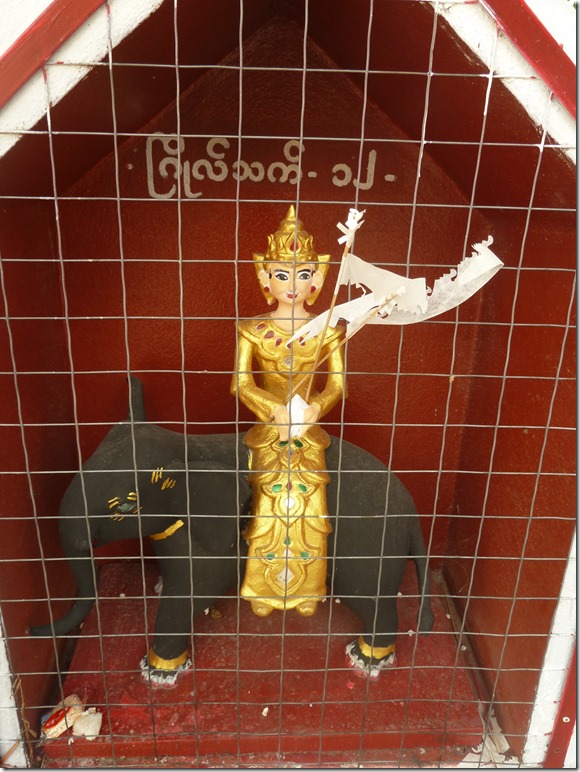 Wow, check out the drop-dead gorgeous chanting from the lady novices. Would’ve taken much more footage, but kind of had the feeling that they preferred me not to do so.

If for no other reason than having briefly checked out a few of the temples, and having heard that chanting, I’m even more excited to visit Burma than I already had been. Stoked, too, that they’ve relaxed the land-entry rules somewhat, now allowing onward passage via Thailand.

By the way, the Burmese script is even more curvilinear than the Thai. 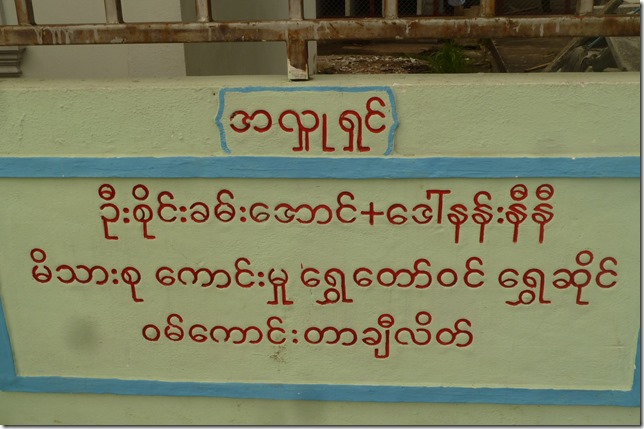 After lunch, returned to the Guest House to grab my headlamp, as there was a cave I wanted to visit. Ended up chatting for a while with the very friendly/helpful American expat running the place – and before long, the chat turned into an hour-long knock-down drag-out. Well, let’s just say we don’t exactly see eye to eye in re the merits of U.S. Foreign Policy. He does agree, however, that Mother Nature will exact her revenge, but soon, upon Humankind for its profligate ways.

So, up to yet another Mountain Temple. This one with not only the aforementioned cave, but also another Big White Buddha. Here he is as seen from the Scorpion Temple. 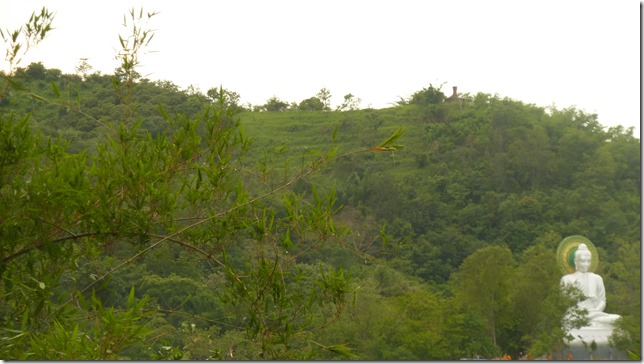 From the temple, a road leads up the hill towards the Buddha. There’s a fork, with a sign pointing onward. 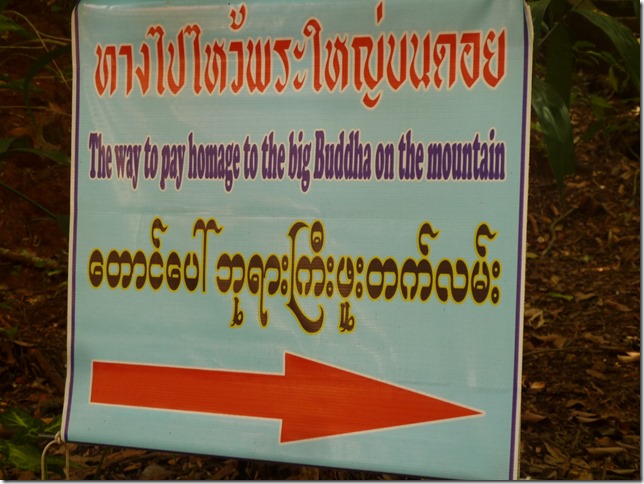 Problem is, the two forks head in the same direction, except that one goes up and the other down. I just assumed that the former would lead to the Buddha, so up I went. And up, and up, and up. Very steep, very hot.

A scorpion crossed my path, answering the question I’d neglected to ask back at the Guest House. That kinda put the fear of god into me, considering that I was walking along barefoot, more less absentmindedly enjoying the jungle views and sounds. (Super-loud Cicadas here – even louder than at the Temples Of Angkor.)

Shortly after that, I began to suspect that this “Big Buddha On The Mountain” was some kind of Thai Snipe Hunt they liked to pull upon unsuspecting Farang. Sure enough, after having lost about thirty gigas’ worth of sweat, I got all the way up to the top — which was nothing but a little shack and a dude inside watching teevee.

He told me that to get to the Buddha, I needed to go back down and take the road to the left. I’d have liked to have roamed around the ridge-top for a bit, as the view was quite lovely. But it seemed he was somewhat eager for me to be on my way – though he was very friendly about it, and all; even offered me a cup of water.

Turned out, there were many roads to the left, all the way down the hill. They all led, after a couple hundred metres, to more little shacks; these ones all with monks’ robes hanging out on the front porch to dry.

Back down at the original fork, to the path leading down, which after a bit turned upward for a steep, short climb, which, within five minutes’ time, had me looking him in the eye. 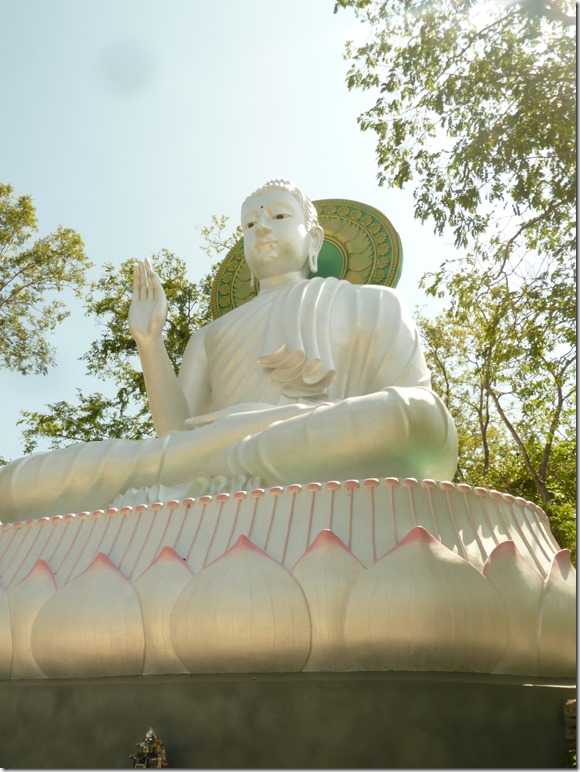 Now I don’t know about you, but I’d hate to be the one who has to go in there and clean out his massive turds every day. 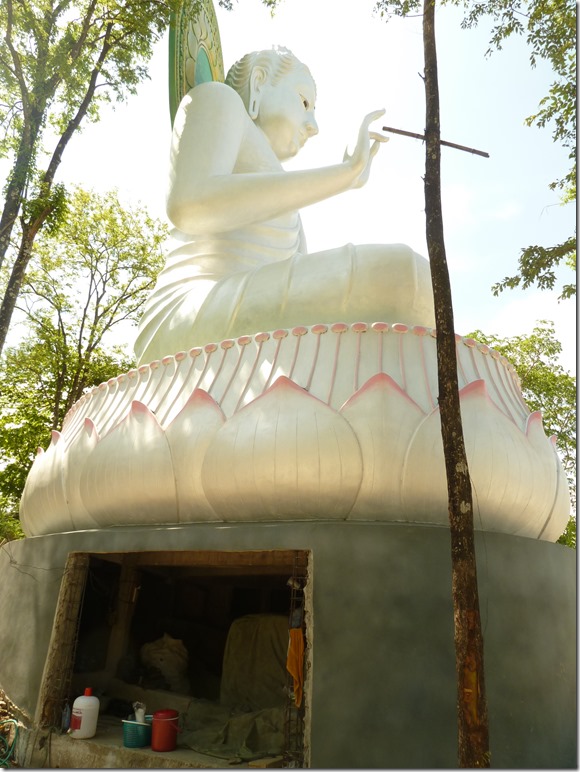 Well, I guess when you’re Low-Monk-On-The-Totem-Pole…

It was nice up here, but I personally preferred the ambiance of the Scorpion Temple. Anyhow, went back down to visit the cave — whose entrance was, unfortunately, locked… 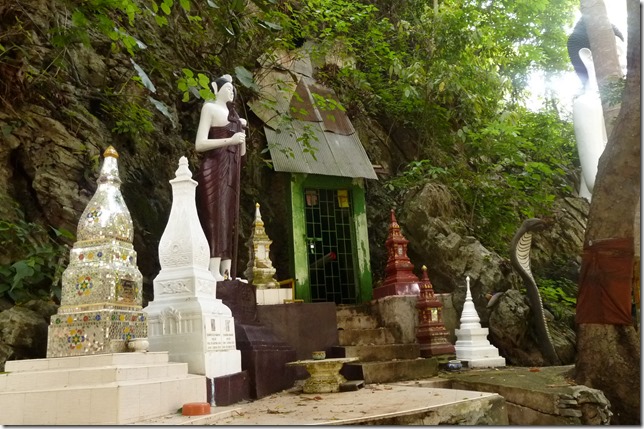 Possibly for the best that the cave was closed; as it was just about this time that the clouds started to make their presence known. I’d just enough time to head down into town and over to the Night Market to grab a Watermelon to take back to the park and eat while the storm began to grow closer and closer. It was gonna be a good one!

And just as the rain finally arrived and pelting, some kids showed up in scooters to take shelter in my same Pagoda, ruining my little Nature Moment that I’d thought I was going to have. It turned out, though, that they were highly entertaining.

They were taking it in turns riding around on this ridiculously tiny pink skateboard, and trying to teach me some Thai words, and showing me their tattoos, and generally making mirth. Two of them were genuinely afeared of thunder, hitting the deck and cowering – bringing gales of laughter from myself and the other kids — whenever a particularly nearby lighting bolt would flash.

Eventually, I asked if I could take their picture… 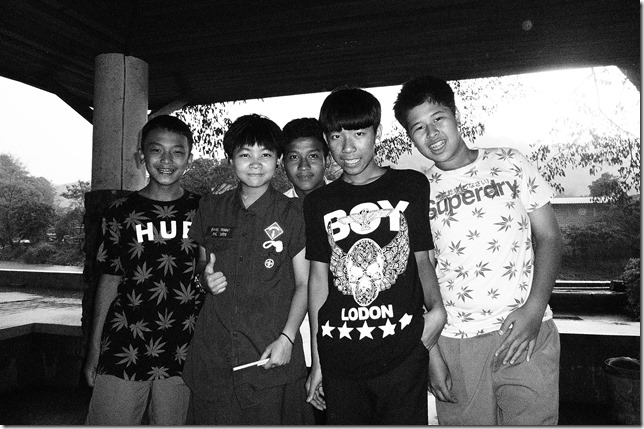 …and then they commandeered my camera and took a bunch more. 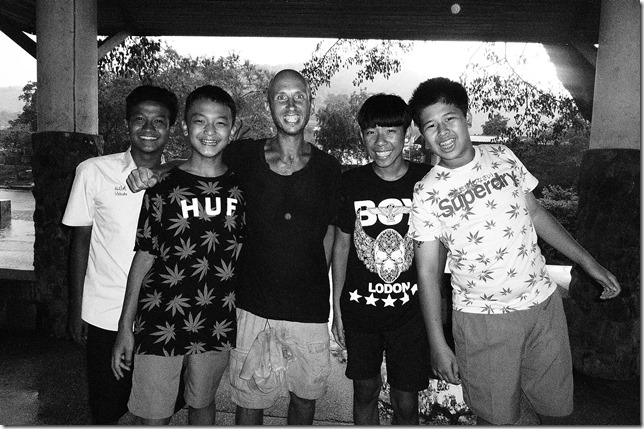 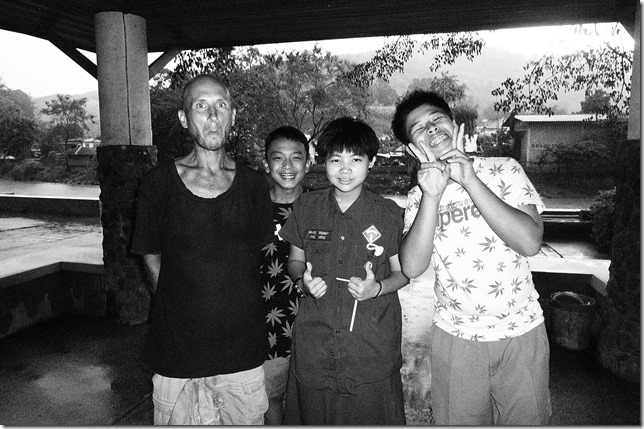 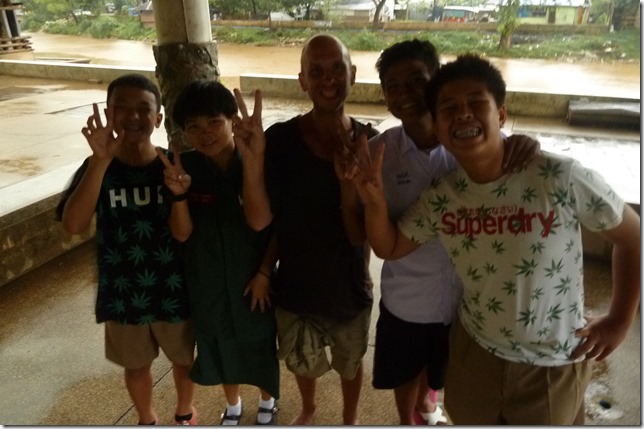 On the bus back to Chiang Mai, I was seated next to an older Thai lady who spoke pretty good English. She peppered me with all the usual questions about my travels, and life back in the States, and I waxed far too enthusiastically about the glories of the Thai Mango.

Had enough time, in Chiang Mai, to scarf down a bunch more of the same, then score some Lychees and Cucumbers to eat on the train, and we were off. Always forget how nice that Northern portion of the ride is. It’s too bad the train doesn’t leave an hour or two earlier, to allow more daylight time to take it in. 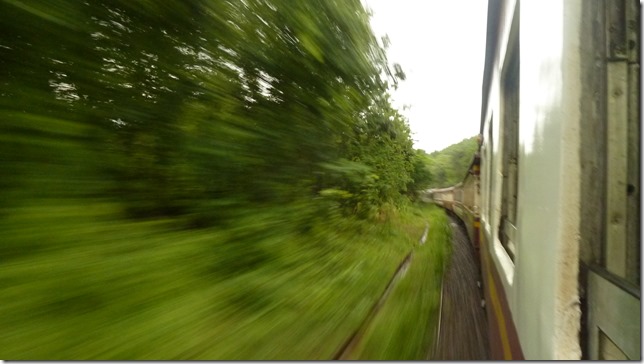 In Bangkok, hopped onto the Skytrain right to the bus station, went to take a leak and then get my ticket to Chanthaburi, with the conductor urging me to hurry my dimpled ass up, or I was a-gonna get left behind. Talk about a short layover!

Was hardly in Chanthaburi for half a frickin’ hour, when I was spotted by some fellow fruit-eaters and fell in with them. Ah, Chanthaburi’s lousy with us freaks this time of year.