KTM For The Win

Chiang Mai: Lychee capital (so far as I’m aware) of the Universe. Unfortunately, Monsoon is late in arriving, and so it’s unspeakably hot right now. Hotter even that it was in Bangkok. (At time of writing – about 2:00 in the PM — Wunderground reports that it’s 105°, and that it feels like 118°. On the plus-side, there was a massive — if somewhat brief — thunderstorm last night, with more scheduled for the next few days.)

This means that, while e.g. Lychees and Durian are easily available, they’re not as inexpensive, nor as tasty, as they ought to be for this time of year. Coconuts are even the worse: difficult to find, and far too expensive when you do. Mangoes, on the other hand, love the heat. So they’re available for sale any- and every-where, and are dirt cheap, and oh so unimaginably delish. Not for the first time, my allegiance to the almighty Durian is this week receiving a stern test at the hands of the Thai Mango. Watermelons, too, love the heat. They’re almost on par with those available in the States in the Summer (in other words, far the best/most consistent Southeast Asian Watermelons I’ve yet experienced).

It also means: no hiking in the hills west of town — as I’d had in the back of my mind to do – until the weather breaks. Instead, getting up early in the morning — when it’s a nice, cool eighty degrees out – to get some exercise in before the scorching sets in. That’s the best time to visit the markets anyway.

To-day, Tuesday, is the day of the Buddha’s birth, enlightenment, and death (i.e., all three events are reputed to have occurred on the same date — which is considered to be a goddam miracle). Out of respect, alcohol cannot be purchased in Thailand on this day.

The tourist district of Thamel is apparently the most heavily backpacker-infested such zone outside of Bangkok’s Khao San Road. It’s awash in Money Changers, Restaurants, Music Shoppes, Trekking Gear Shoppes, and Arts/Crafts/Clothing Shoppes; as well as thick clouds of street-hawkers and taxi- and rickshaw-drivers.

The latter double as dope-peddlers, though they’re very uncreative in their marketing: their only intro line – and one will encounter this dozens of times per day – is, “You need something?” That’s often followed up with, “Very good quality!”

Once, I did have a guy take a different approach:

Him: Excuse me, sir. Do you remember me?

Him: You were…you need some hashish!

Me [Laughing]: No, I don’t need any hashish.

In re the Music Shoppes, some of them have Marley or Hendrix bumping. But the vast majority play this on an endless, endless 24/7 loop.

There are also some music venues in Thamel. For May Day, one of these hosted a fundraiser for an Infoshop (somewhat-confusingly called The Infoshop) which has apparently been open since 2010. Four quite good forty-minute Punk Rock/Hardcore sets, which made me feel right at home. All for a measly 150 Rupees. I think there were altogether six of us there from Alobar — though some arrived late, and some left early.

Here are a song each from the Squirt Guns and Youth Unite.

Outside of Thamel, the city is just an incredible treat: Streets and alleys bustling/bursting with workaday Nepalis, nary a tourist in sight. This is the real Kathmandu, intense and exhilarating. Also, a photographer’s dream come true.

All of my Nepal photos are now online, in three different Sets (or “Albums”, as Flickr now prefers to call them):

So, I’ll try to not get too crazy with the Cheez Whiz, here. But, damn, what a great place in which to get lost! Best times to wander are early mornings, and late-afternoons, when the streets are a hive of fascinating activity… 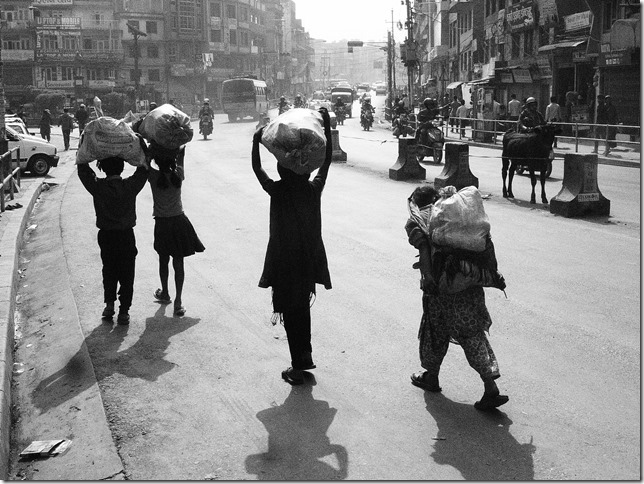 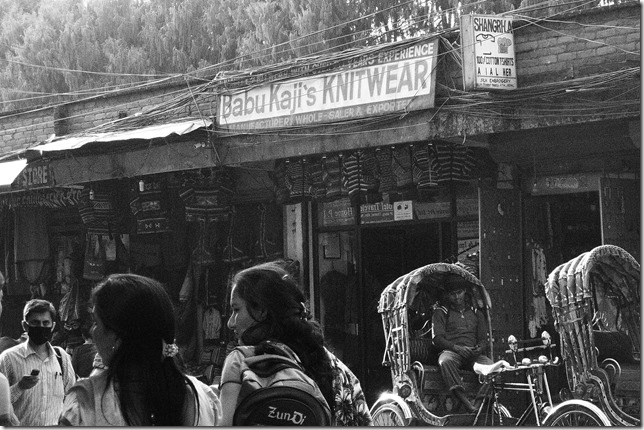 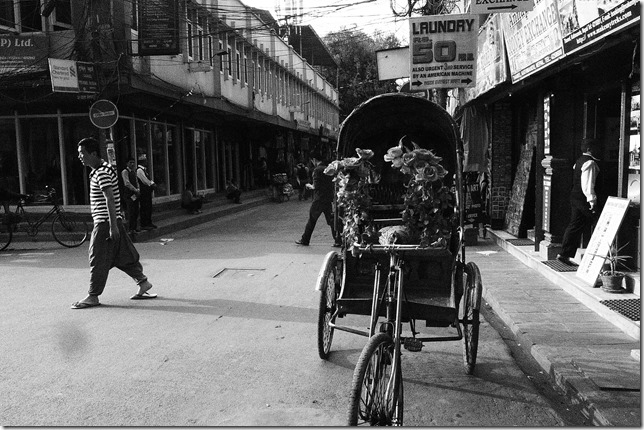 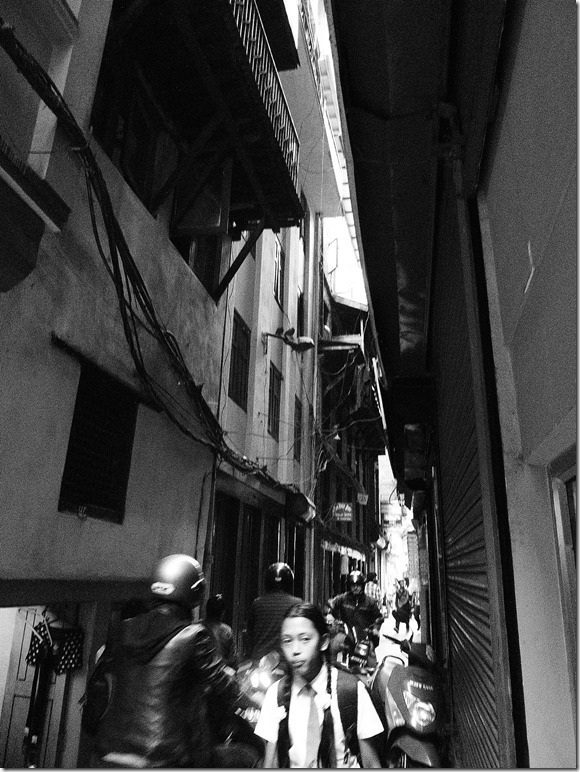 …and the markets are bursting with produce. 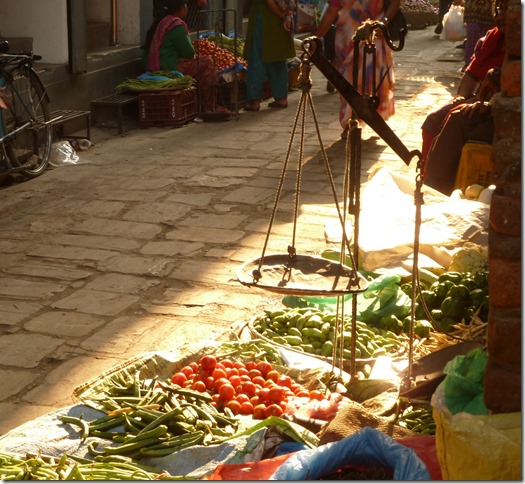 Didja ever see a fuckin’ mountain of Okra before? Well, now you have! 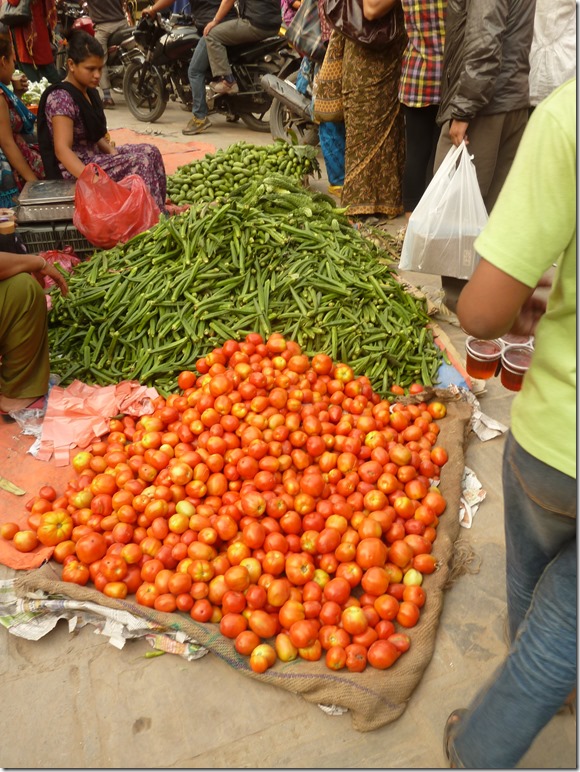 Unsurprisingly, there are plenty of humorous signs. From a distance, I thought this one read, “The Power To Load“, which I hoped might, if nothing else, be a Judas Priest reference. 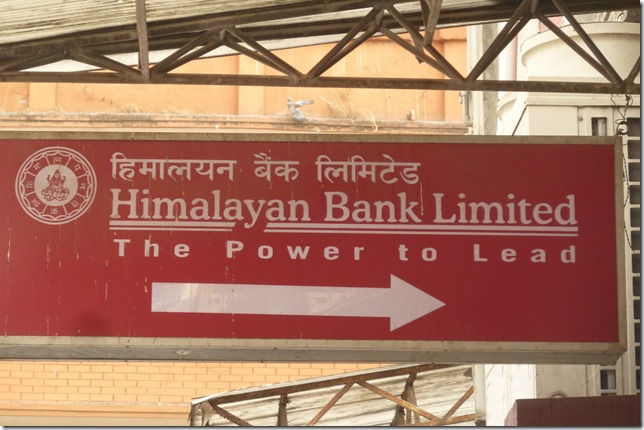 This one cracked me up ’cause everything on this block, including this building, looked like an absolute dump. 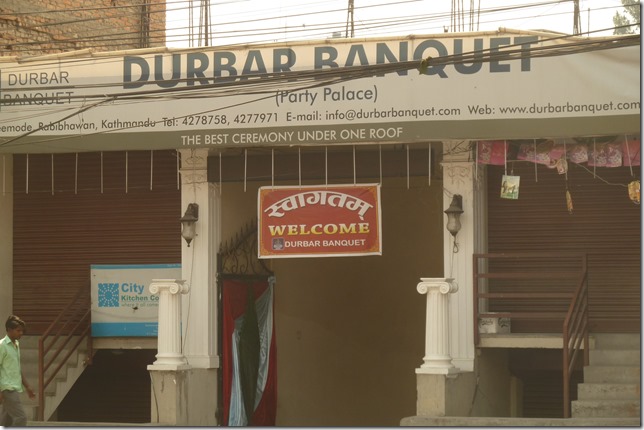 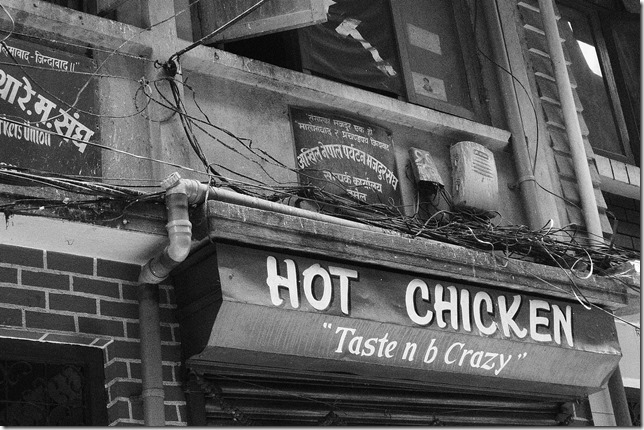 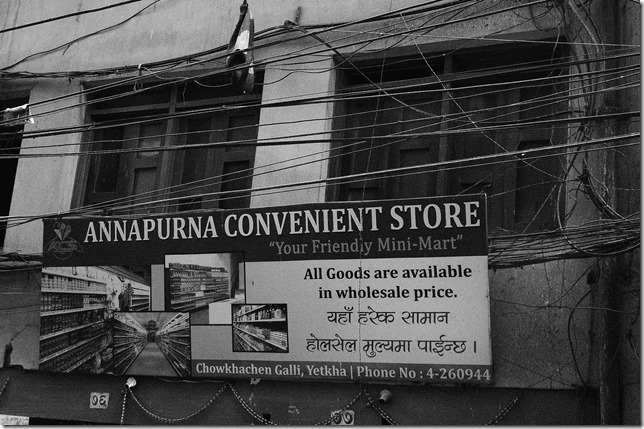 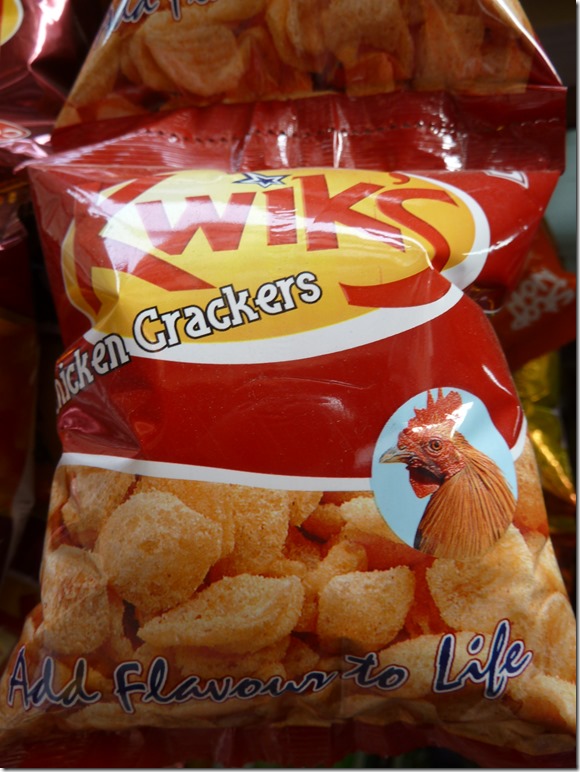 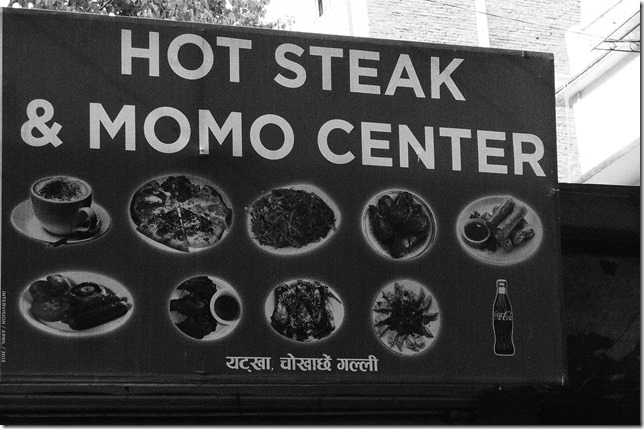 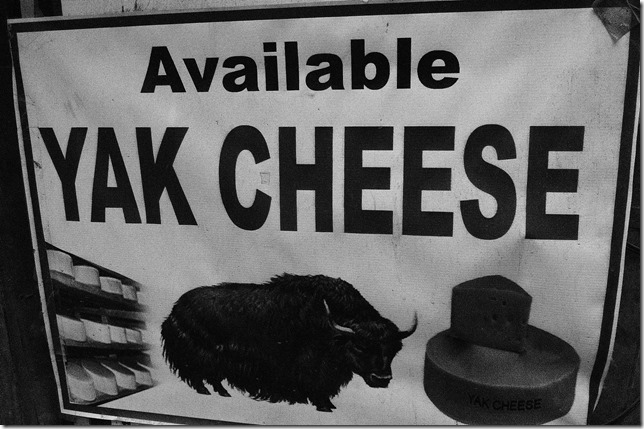 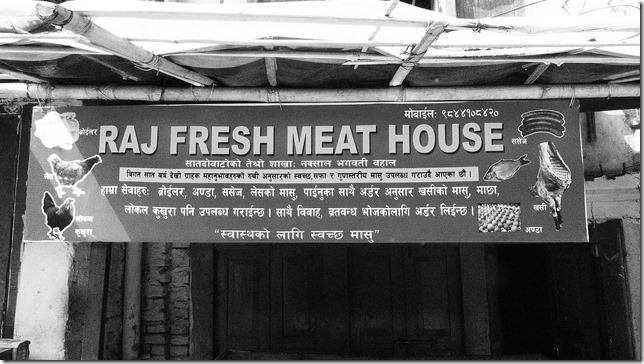 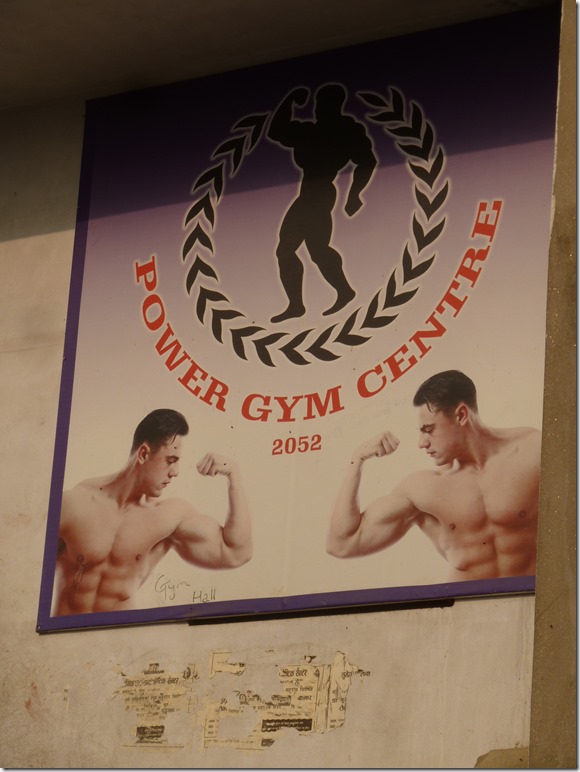 Most interesting, of course, are the people – just normal people, in their normal surroundings. But to the visitor, both they and said surroundings feel exotic, enchanting, and beguiling. 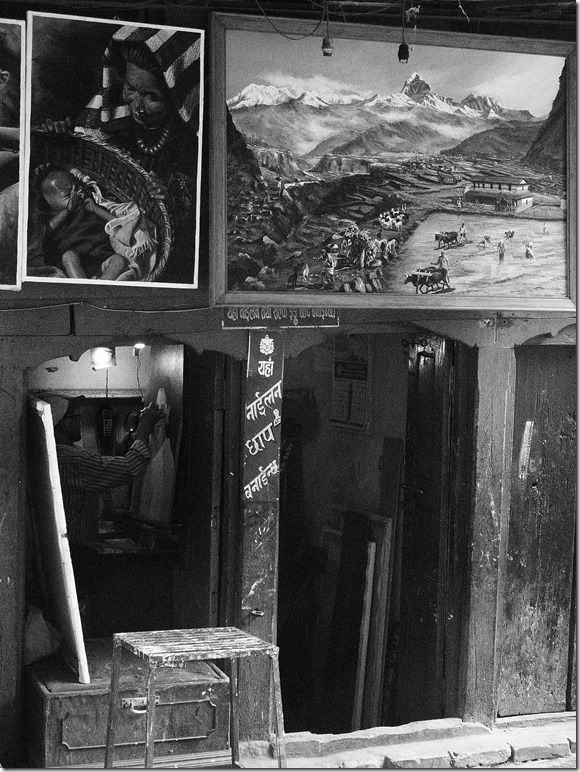 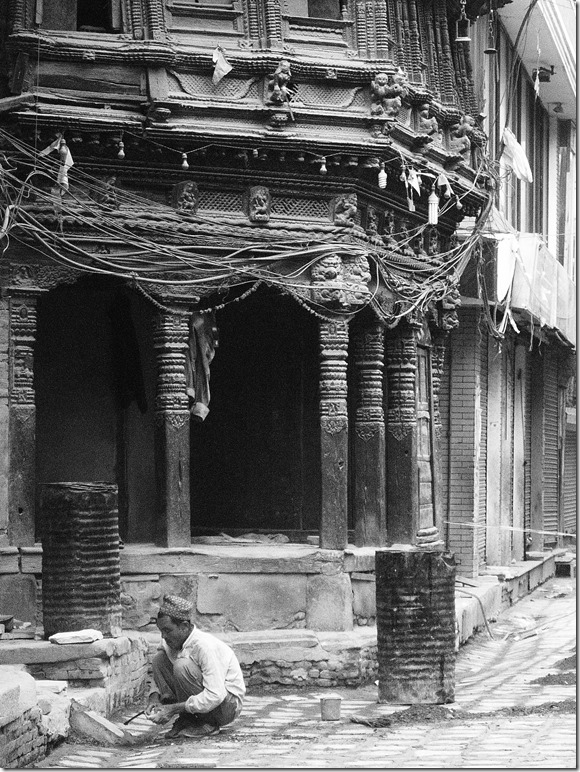 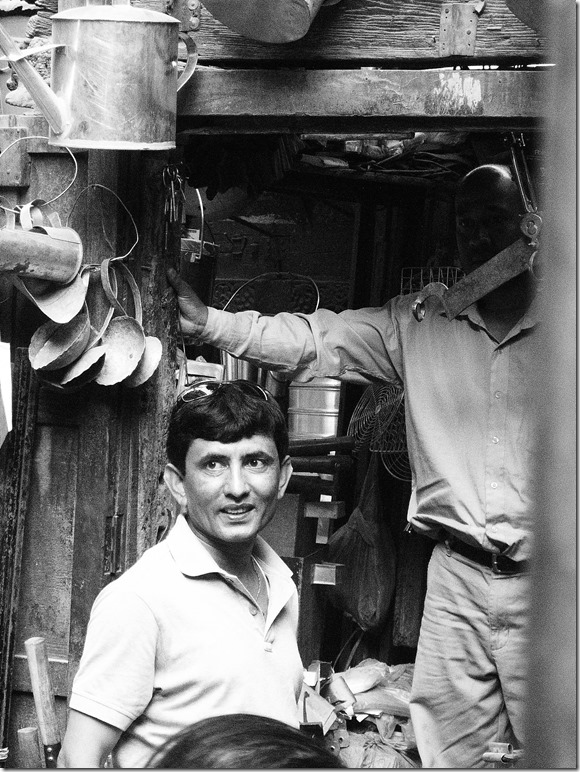 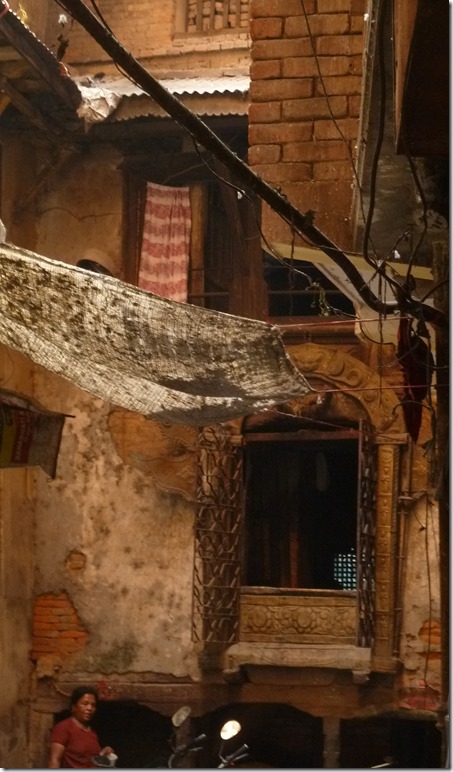 These kooks dress up to make themselves look like Holy Men (or what), and then promise you good luck if you’ll let them rub some red dye on your forehead, or sprinkle some flower petals on your shoulder – after which, asking for a hundred rupees in return. They’re kind of a pain in the ass, always pestering. Gotta admit, though, they make very good photo subjects.

As do the kids! 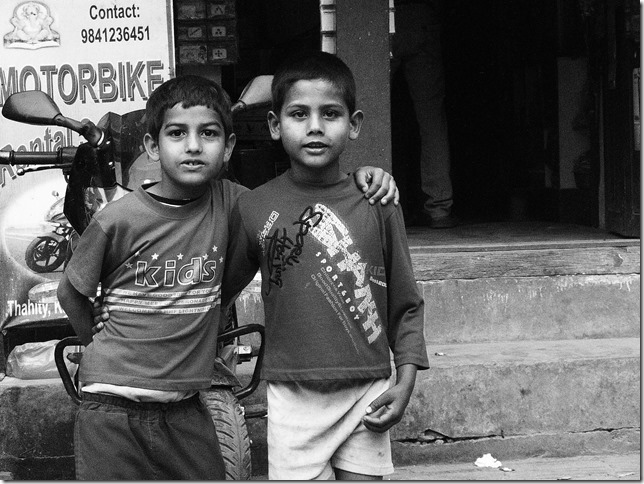 As previously mentioned, kids everywhere love to pose for photos. And also, to shake hands. One of the more fun activities, I found – both in village and in town – was to call out a hearty, “Namaste!” to each child one passes, and offer to shake their hands. They eat that shit up. Also, they’ll come running from metres around when there’s murmur about of a farang shooting photos – so that, you’ll have to keep shooting ’til they’ve all arrived to the scene and had their pictures taken. 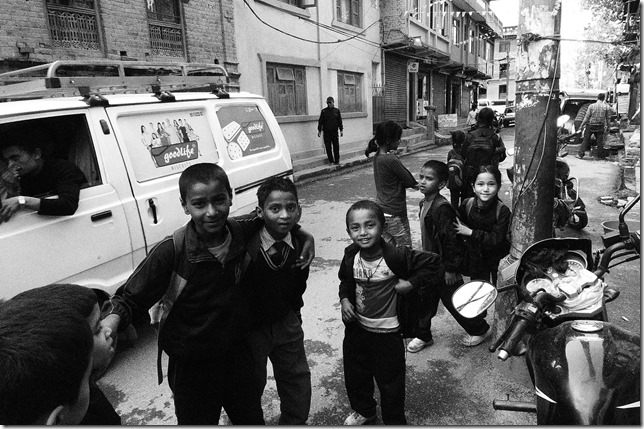 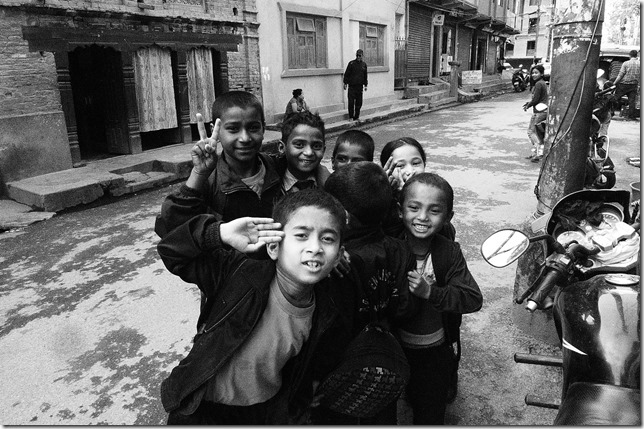 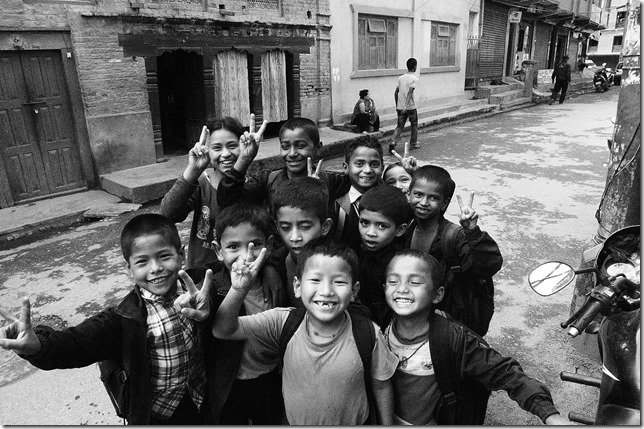 These two are probably the worst Cricketeers in all of World History. But, holy shit, did they ever give great photo! Never could figure out whether they even saw me; nor, if they did, whether they were aware that I was snapping pics of them. 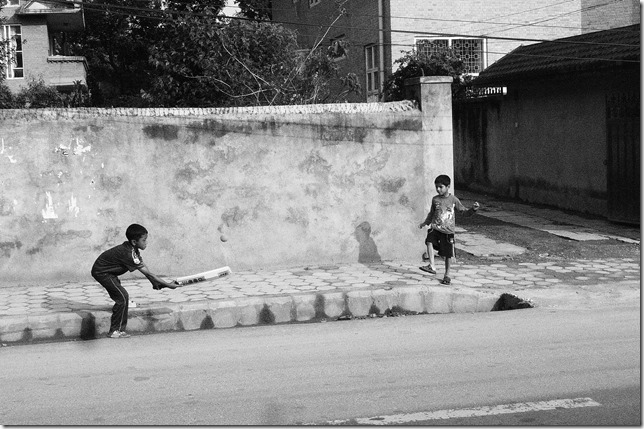 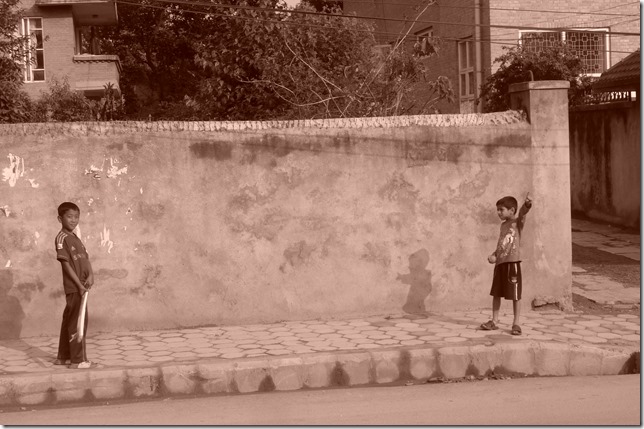 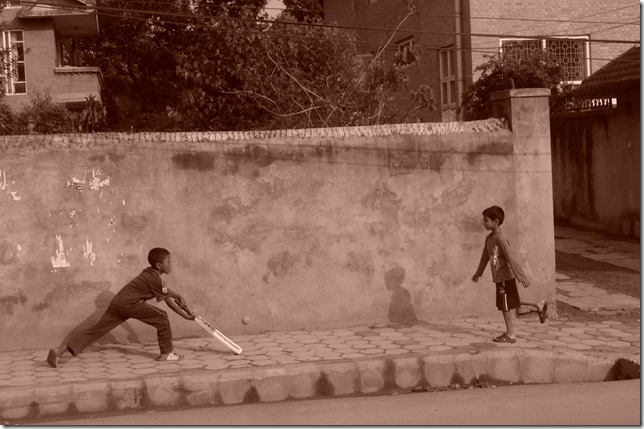 This guy was drunk, and more than a little crazy. Pretty fun to talk to, though. Kept calling me “Buddy”. Said he owned a shop in Thamel, and bade me follow him there. Said I knew I could trust him because he was letting me take his picture – nobody else, he assured me, would allow such a thing, for fear that it would land up on the Internet. It was much easier giving him the slip than I’d feared it might be, considering he was very intent upon showing me his shop. 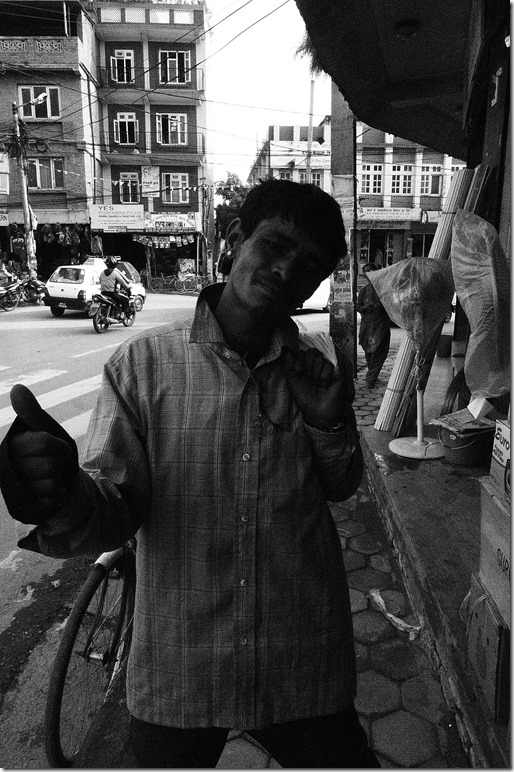 And then there are the Temples! Will save that for a future correspondence, and leave off for now with a coupla random, awesome, shots of bucolia amidst the hopped-up Whirling Dervish of life in Kathmandu. 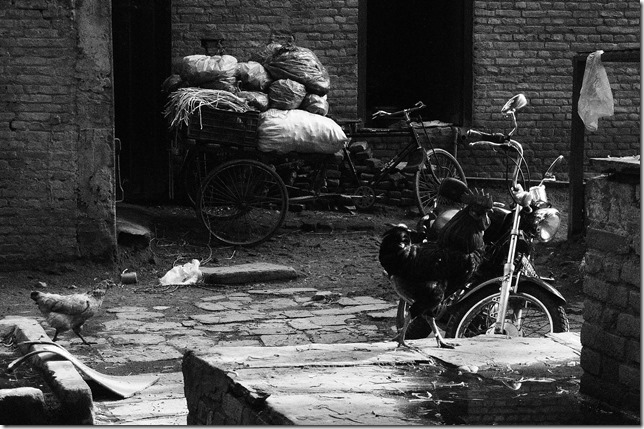 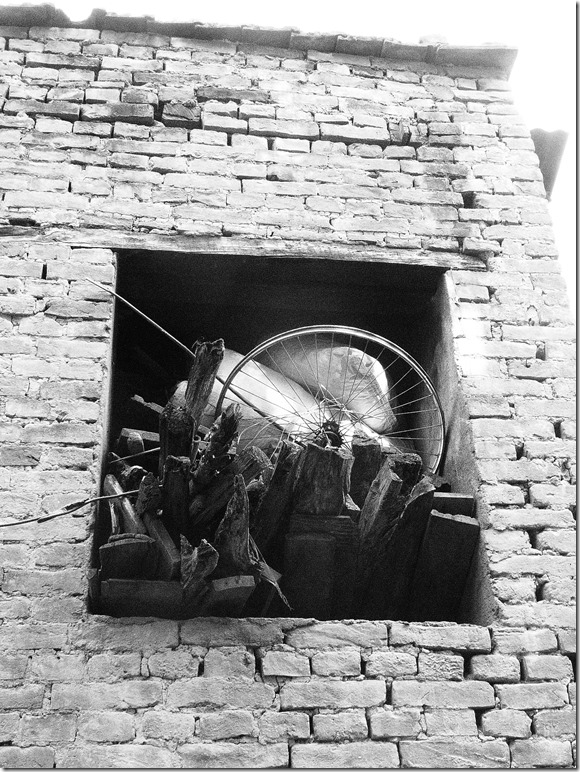