[dc]G[/dc]ot the city bus out to the suburban mountain town of Air Itam (cool name) to pay visit to the Kek Lok Si temple. One of Southeast Asia’s most famous, it’s nothing if not massive and sprawling. 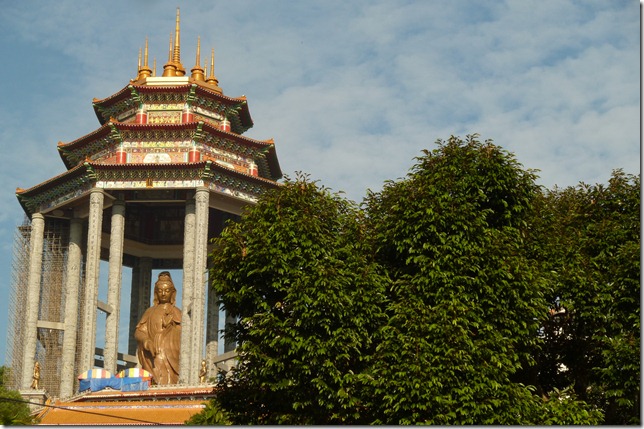 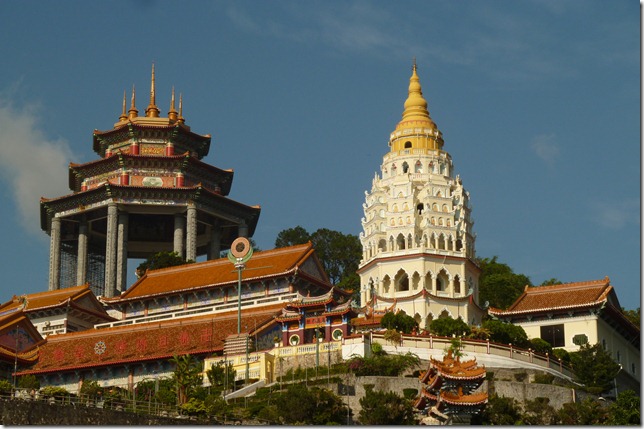 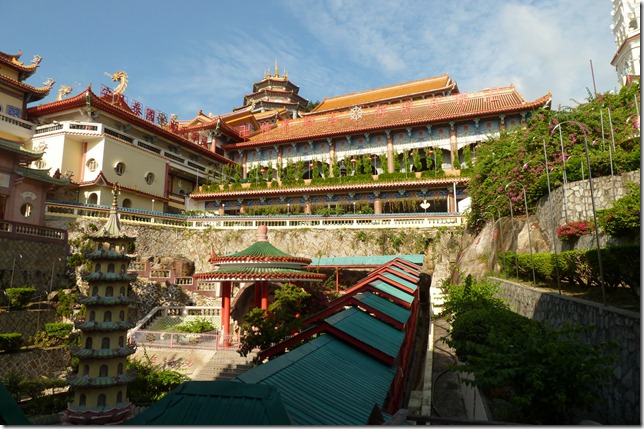 And the setting is pretty special. 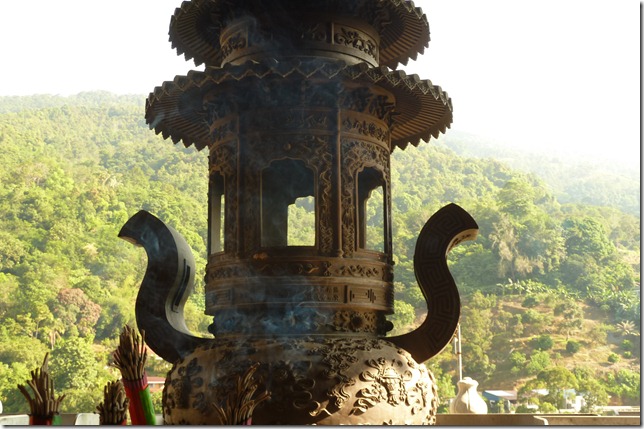 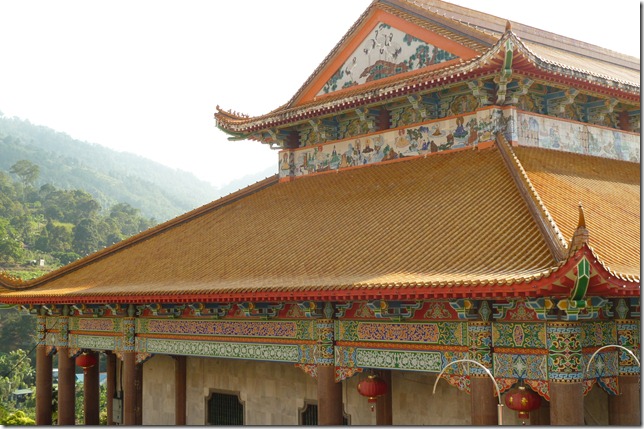 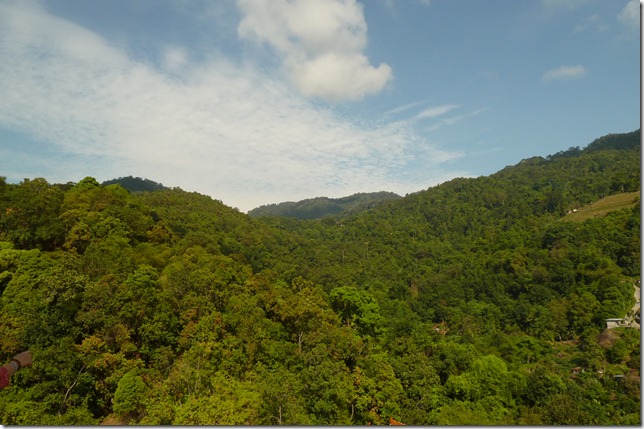 For some reason, though, I felt a bit underwhelmed by the place. Certainly worth visiting, I thought; but not really deserving of its renown. Looking, now, at the pics, however, it seems to me that I may not have given it its due.

There really are some beautiful moments to behold. 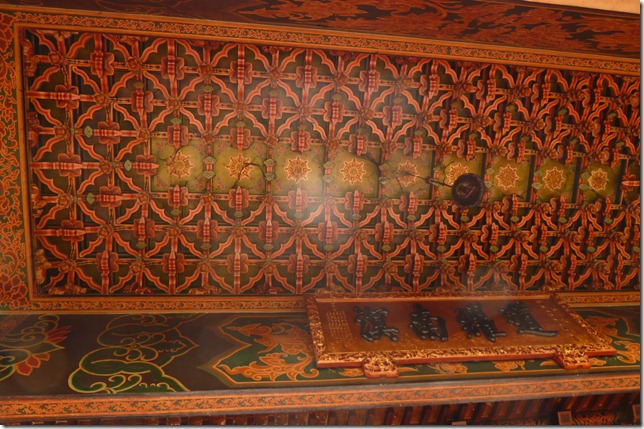 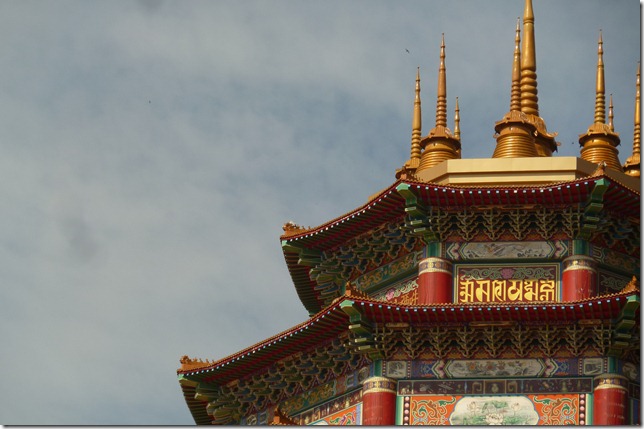 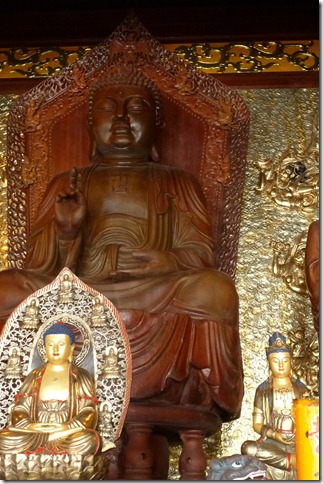 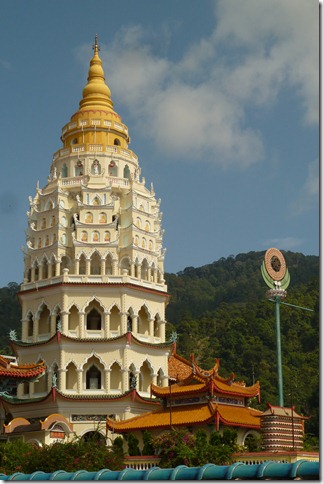 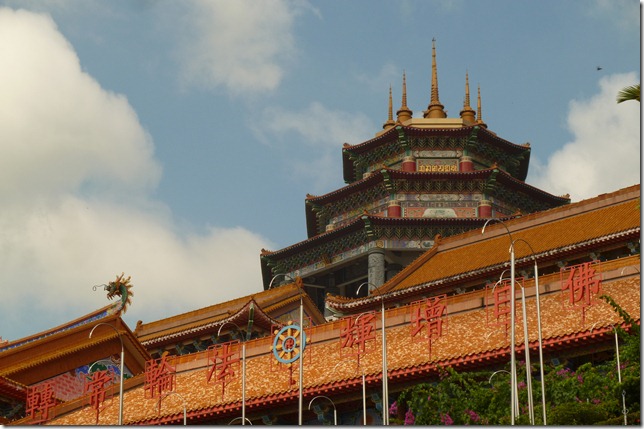 Climbing up the pagoda is fun: there’s a shrine at each level; but they each look as though they’ve not been touched since about 1953. 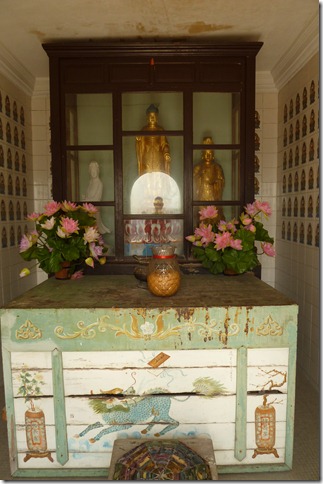 View from up there is pretty great, too. 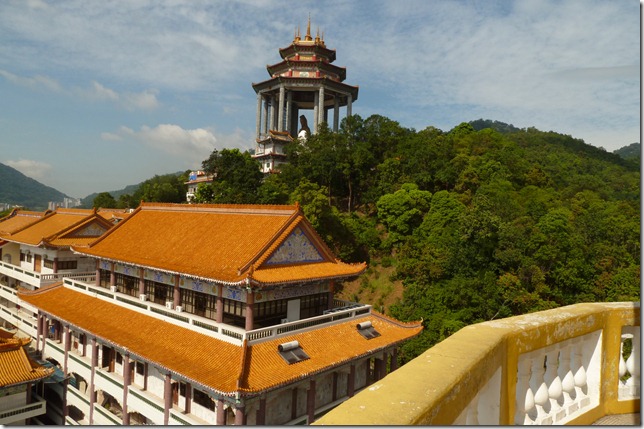 And, what?, there’s always this. 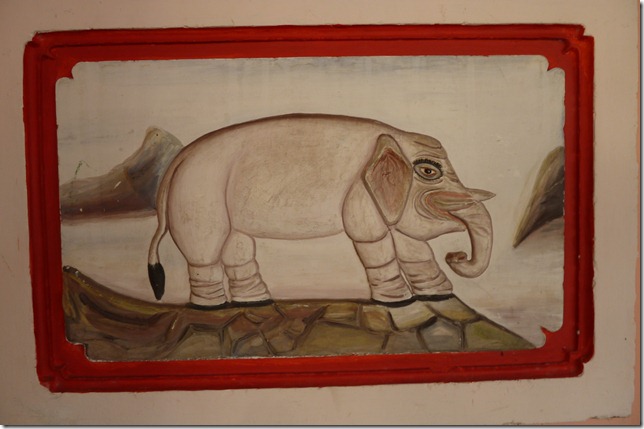 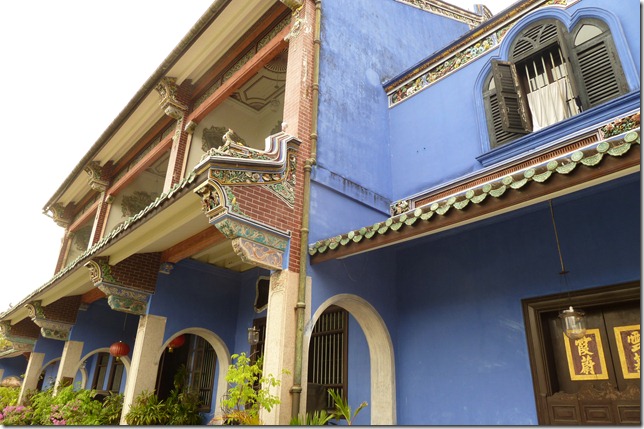 Belonged to some dude who arrived in Penang with only the rags on his back, and built some sort of big commercial empire. One is only permitted to visit under the auspices of a guided tour. No photos allowed – but in fact, the tour was more interesting than house itself; so didn’t miss the camera too very much.

After, was heading down to the Market to get some lunch, and heard somebody hailing me (or so I thought). Turned around, and it was the crazy Indian mofo from last week!

“This is fate!” he triumphantly exhorted. “This is fate that we should meet again! I was just walking here, la; and I went into this alley to urinate…” (This would be the first of very many moments busting my gut.) “…Otherwise, I never would have seen you.”

I asked, just out of curiosity, how often he prefers to “urinate” in the alley? He took the innocent query as an affront to his decency, however; going to great pains to explain that of course if there’d been a coffee shop around, he’d have gone in; but that the alley was the only site available. He even pulled me back to show me precisely where he’d done the deed, and that it had been out of sight of the general public.

Then he was off and running with many of his same crazy postulations, plus lots of others besides. He also went pretty meta at times, at one point even professing that the “spirits” were giving him a bad vibe about me – because of the abrupt manner in which I’d cut off our previous conversation. (At 2:00 in the fricking AM, recall!)

“I even gave you the royal send-off!” He had walked with me about half-way back to my hostel, before breaking away. There I was, on the floor again.

And then a third time when I was egging him on about his belief in god. “So you don’t believe in Santa Clause? But you do believe in god? What’s the difference?”

“They are not the same. Santa Clause is a charlatan! He is an evil man! God is pure.”

When I asked him for how long he’d be in Penang, he allowed as he didn’t know, because the spirits had sent him for special purpose; i.e., to teach people.

“Prophet!” But he didn’t exactly like to use that term. Still, he’s here, he says, “saving lives”.

How I do wish I had had a dictaphone on this day, I must tell you! But I didn’t, and that’s that. Did, however, manage to wing a shot of him. The one on the left. 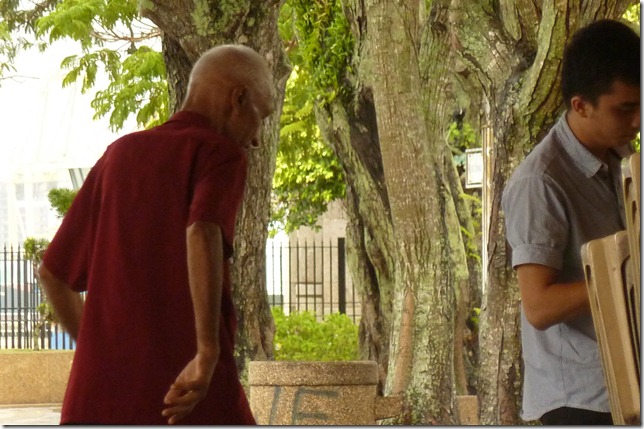 Passed some dudes in a shoppe, and they remarked upon my Watermelon. I offered to share, as I always do; but these guys actually took me up on the offer. 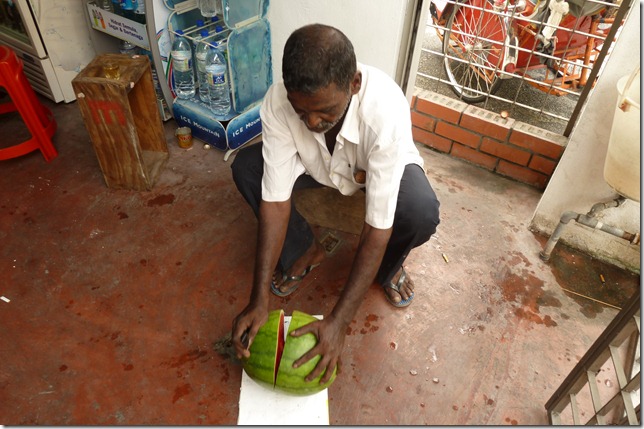 Hadn’t expected them to take such a big cut; but I seen them later on, and they said they’d quite loved it; so I guess everybody wins.

Asked the Indian weirdo if I’d gained some Karma points for having shared; but he said that I had not, because the recipients had not been deserving. Fucking nut.

But get this! He was hammering his Karma crap again, this time in re the pilot of the Enola Gay. Apparently, he went insane afterward, and the Indian gent was exceedingly thrilled by this supposed Karmic comeuppance. “He could have refused to fly, but he didn’t.”

“But those 200,000 people are still dead,” I protested, bringing in the same line of argument from our previous conversation.

He again accused me of muddling and confusing the issue, of “digging too deep”. But a while later, he told me that he was beginning to reconsider – that he’s now not so sure in the utility of Karma as a purveyor of justice.

[dc]T[/dc]o-day Kam, the durian-loving hostel staffer, and three of his friends (whom he’s known since school-days) drove out to the little burg of Balik Pulau – the epicenter of the island’s Durian output — me tagging along with. Sonny, the driver, took us off-road and up a mountain to a small farm, and out we pigged.

Here’s the farmer, with the freshly fallen fruit. 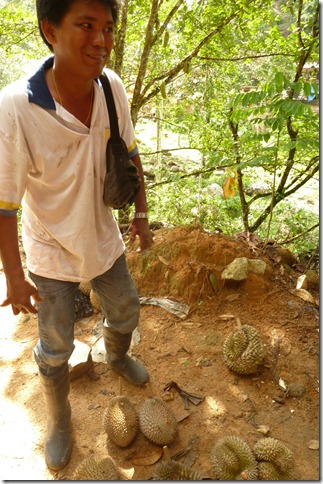 And here are the five of us, just getting ready to blow our ways into the first offering, a truly killer Red Prawn. 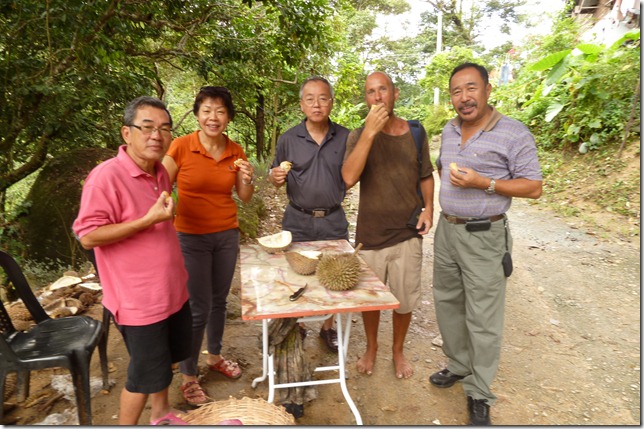 Beautiful Kun Poh here; this is becoming one of my preferred varieties. 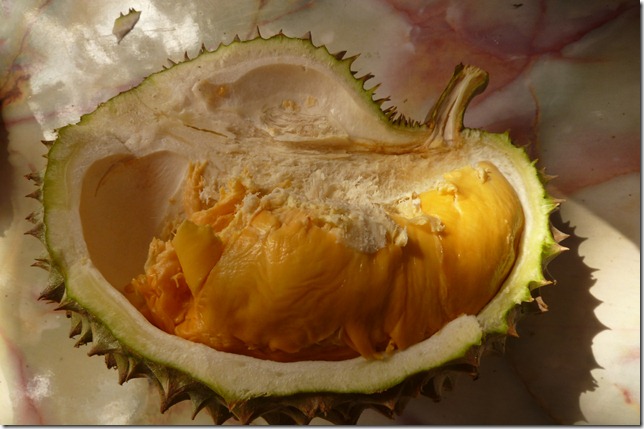 This dog was all scavenging the seeds – but it later got smacked by a flying husk! 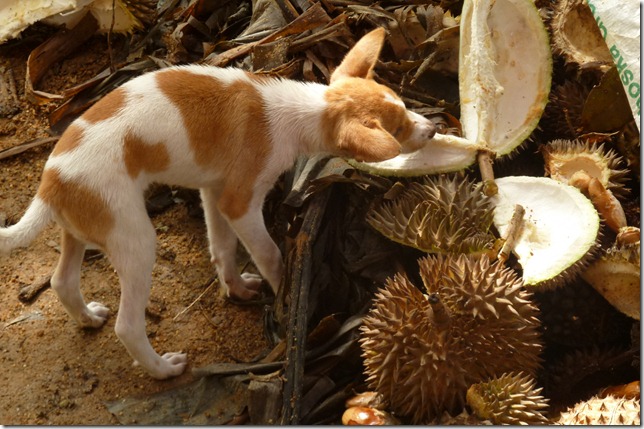 Behold the trees of wonder! 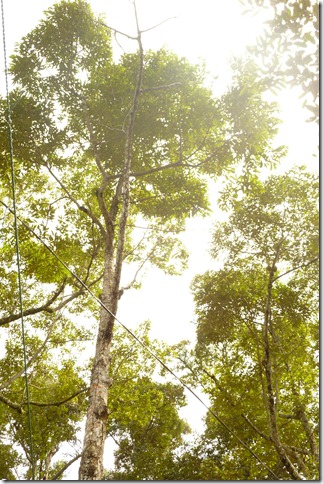 After we’d gobbled them all down, they all went inside and bought up some huge quantities of freshly made Durian Cake. (It’s not really a cake — more like soft candy. I even had a bit of it, and it was quite good.)

Back in town, they stopped for Laksa; a kind of fish/noodle soup. Apparently Penang’s Laksa is the best in the world, and Balik Pulau’s the best in Penang. 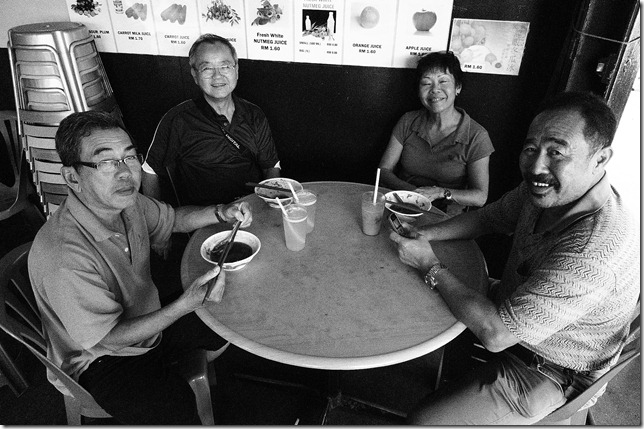 Then we visited some Durian stalls, and loaded the truck up.

When we arrived back in George Town, I was informed that the hostel had arranged for me to take a homestay tomorrow night at another farm back in Balik Pulau. Uh, yeah: they really go above and beyond here at this hostel! I mean, though vaguely aware of the existence of on-farm homestays, I’d not even inquired about the arranging of such a thing. I tell ya: when there’s a Durian-loving farang in town, the locals go all-out.

Walking through the Market in the afternoon, my eyes popped out of my gourd at the size of these Jakfruits. 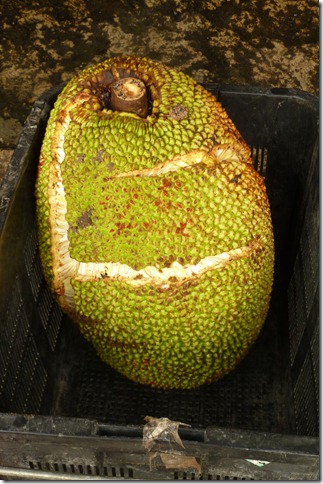 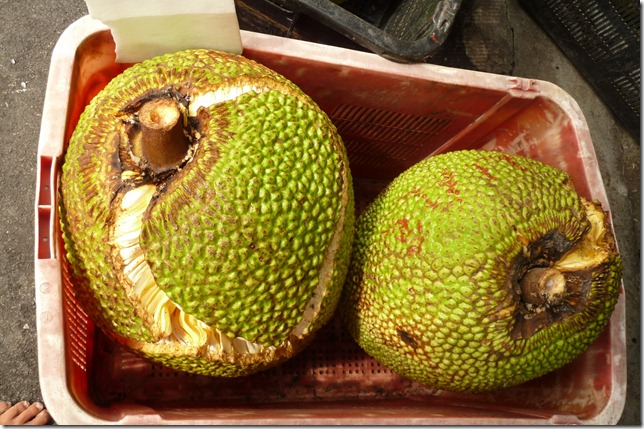 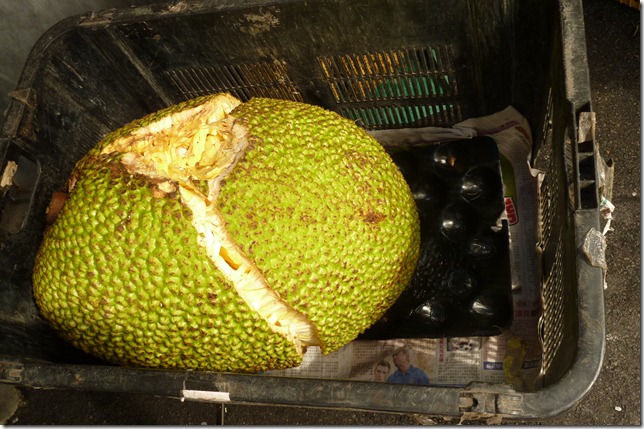 Geez, it’s enough to make one suspect that the phrase “Holy shit!” was invented in the anticipation that somebody would someday make witness to these very fruits, and be in need of some way to react. Anybody else reminded of that Far Side? “Early vegetarians returning from the kill.” (Sorry the image is so small; it’s the only one I could find.) 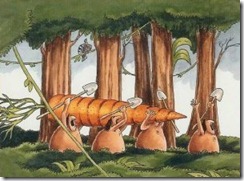 So, my evening meal was the two fruits purchased back in Balik Pulau. First up, a Ling Fun Chao. Not sure about the spelling – but the variety is named after Jackie Chan’s wife. 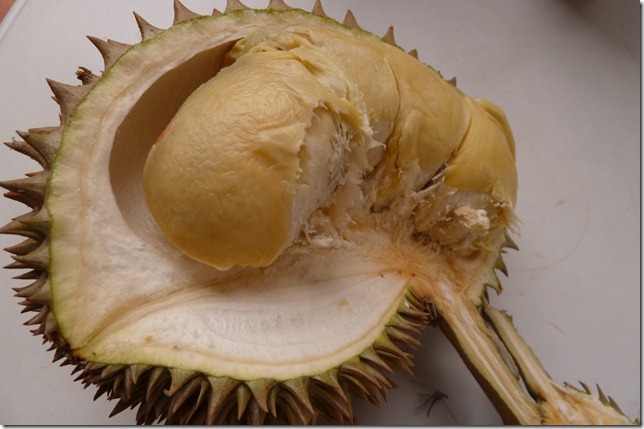 When I’d purchased it, Sally had asked me to save one pod for her; ‘cause she wanted to give it a try. Of course, like a jackass, I totally forgot to do. Hour or so later, when she showed up, was a pretty horrifying feeling.

Also got me a good-sized Hor Lor. 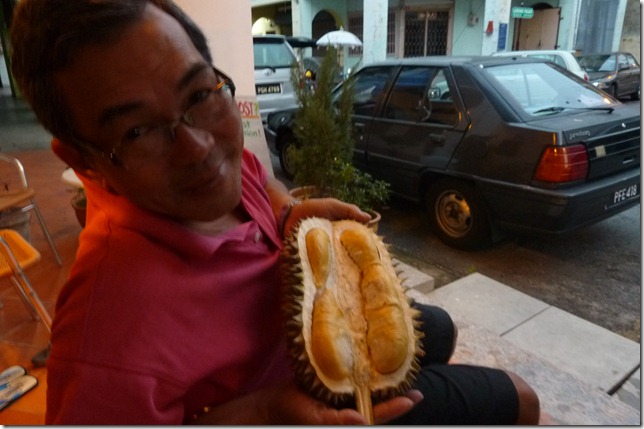 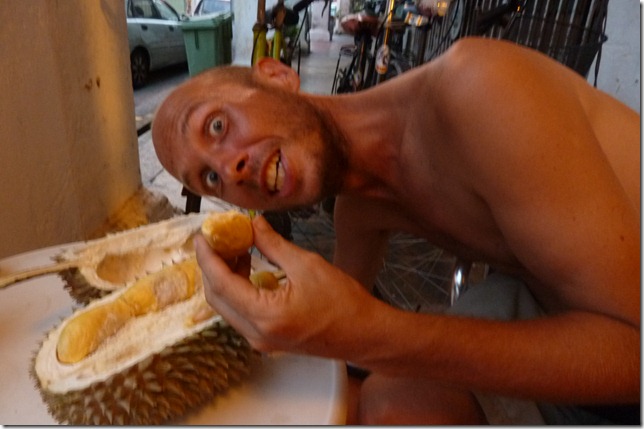 Durian are so photogenic, ain’t it?