Will The Real Chiang Rai Please Stand Up?

[dc]A[/dc]s of Friday night, my first day in Chiang Rai, I was of the belief that I had unwittingly stumbled into an yet-undiscovered durianopolistic paradise. For, it had been on that night that I had eaten the very greatest Durian ever to have passed my lips; purchased from a smiling and affable vendor at the bustling evening Market.

Meanwhile, I had earlier in the day downed some insanely delicious Lychees. Moreover, the cukes were great as well. I’d come for the Black and White temples; but was beginning to think that the more fun would be attained in the eating than in the templing.

But then, over the course of the next three days; that smiling and affable Durian vendor never showed up to the market – neither morning nor eve. And while there were some other Durian vendors; nary was a single ripe fruit to be found. Yesterday, Tuesday, however, the smiling and affable vendor had returned; at whose stall I discovered two fruits that were close to being ready. Okay; this is good. And they were quite good.

There’s another vendor – this one a smiling and affable lady – selling the best Watermelons in all of Asia (at least that I’ve tasted); and priced to move, no less. But she’s the only Watermelon vendor in town; and, much like the Durian vendor, keeps an erratic Market schedule.

As for the Lychees, there seems to be an inverse relationship between price and quality. “Well then,” you may be speculating, “just get the cheap ones! What’s the issue?” The issue is, I must warn you, that the vendors selling the heavenly/inexpensive Lychees: they too display a dismaying tendency to go missing just when they’re needed most (i.e., when I’m frickin’ hungry as, and only the mighty Lychee will truly satisfy).

As far as the Mangoes and Mangosteens go, I only this very evening found some ripened examples of the latter (so insanely good!), but still no luck with the former. The Longkongs have been reliable and abundant – but more expensive that those in Bangkok.

So the jury’s still out on the Chaing Rai fruit scene. But it’s certainly got more potential than I’d have expected for such a fairly small town as it is.

[dc]N[/dc]o similar ambiguity, however, concerning its apparent status as Southeast Asia’s Mecca of Metal. Happened, on Saturday after returning from the Black Temple, upon a Battle Of The Bands programme in progress down at the mall. All High School kids, I think maybe. 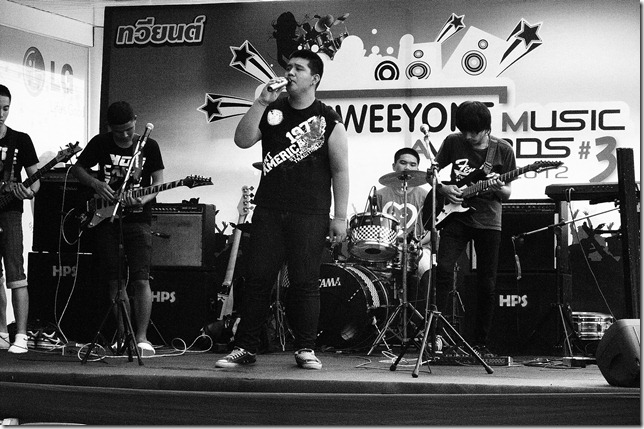 Anyhow, this band were just killing me dead with the Metal prowess; and so I thought to go ahead and record the next song. But instead, ‘twas the set’s conclusion; and all that was left to it was for them to stand there repeating, “Yes, sir; no, sir; thank you very much, sir,” at the judges’ analyses. The emcee’s reactions are pretty hilarious, I think you’ll agree. 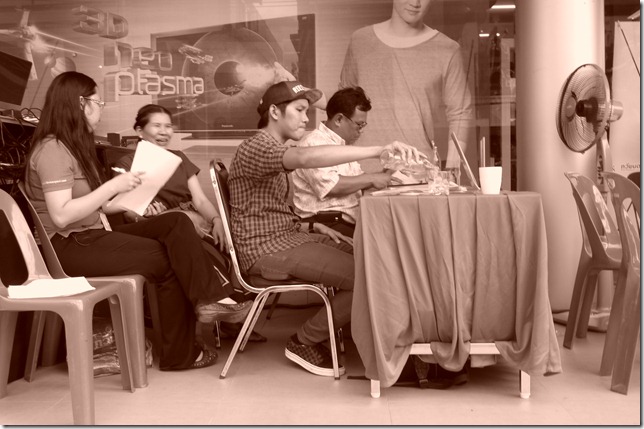 I’d read that the Sunday Walking Street – at which the street is closed to traffic, and trinkets, handicrafts, and foods are offered for sale – includes a number of different traditional musical performers along the length of its stroll.

Certainly there were some of these. For example, ever seen this instrument before? I definitely had not!

But there was also a stage devoted, again, to youngsters cranking out the high-decibel Heavy Metal musics! Watched this one very good act soundchecking for about twenty minutes or so before finally wandering off under the assumption that their set proper was never going to begin.

Okay, then Monday was the conclusion of the Battle Of The Bands competition. When I showed up — having returned to town from the White Temple this time — it was more endless soundchecking. These Metal kids here are soundchecking fiends! 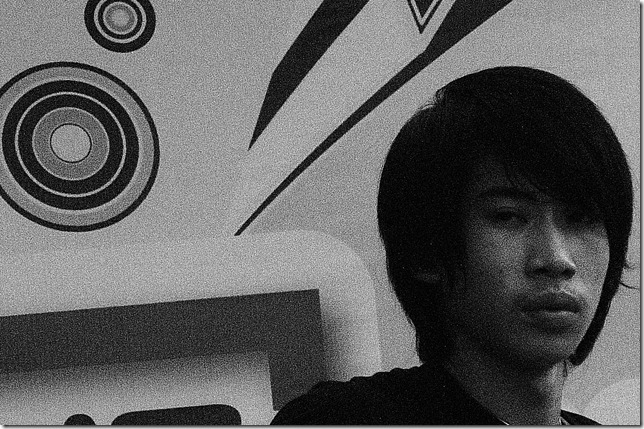 It was good enough to make me want to stick around all the way through to the end of the soundcheck.

But then, once they’d finished soundchecking, instead of ripping into their set, they ceded the stage to a different band to itself come up and soundcheck! Sheesh! So I took my leave then; but duly impressed at the Chiang Rai kids’ Metal chops.

Sunday night, incidentally, at the Night Market (kinda like the Walking Street, only different), was this pretty good trio.

In fact, before this number, they played as just a duo, without the singer. I actually preferred this arrangement.

[dc]T[/dc]he in-town temples, much like those in Chiang Mai, are very beautiful – and old as the hills. Helpful signs in some of the more historic ones give clues as to the temples’ role in the city’s upbringing. 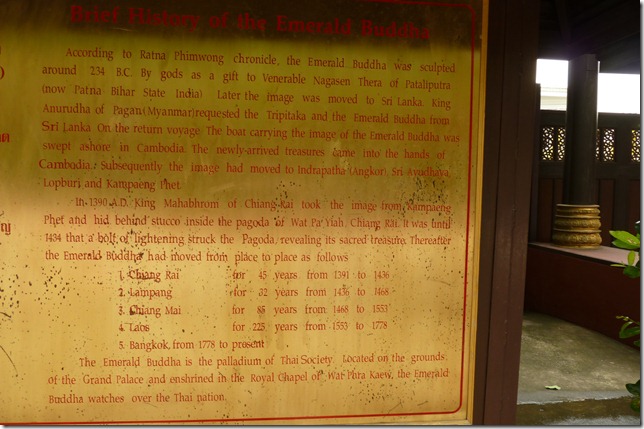 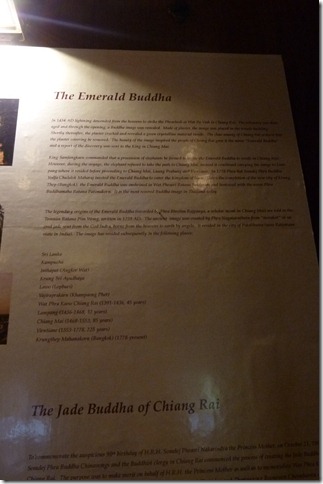 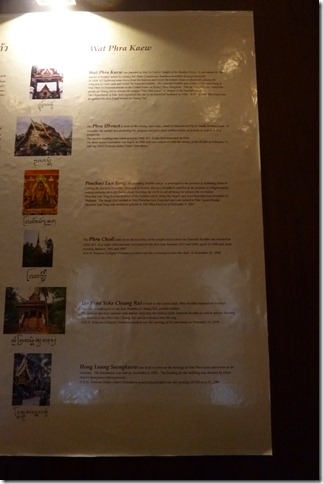 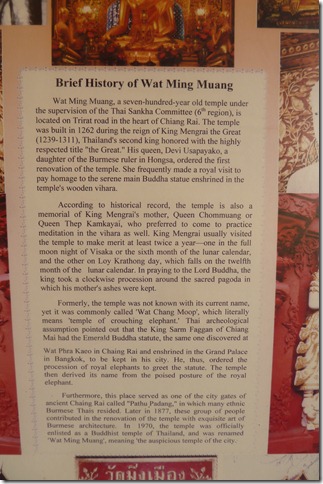 I’d known, in broad outline, the story of the Emerald Buddha; but had not known that Chiang Rai had been the site of its rediscovery. Also had not known, when booking here, that the Guest House would be easily within gonging-distance of said Buddha’s old home.

I’ve not seen the original, despite having spent many a week in Bangkok before now. Judging by the replica, I’d be pretty meh if/when I did do. The murals in the building housing the replica are guh-reat! However, they’re locked away behind glass, and have these kooky green lights reflecting. That’s murder on the photographing; but they’re so good that we ought to have a look all the same. 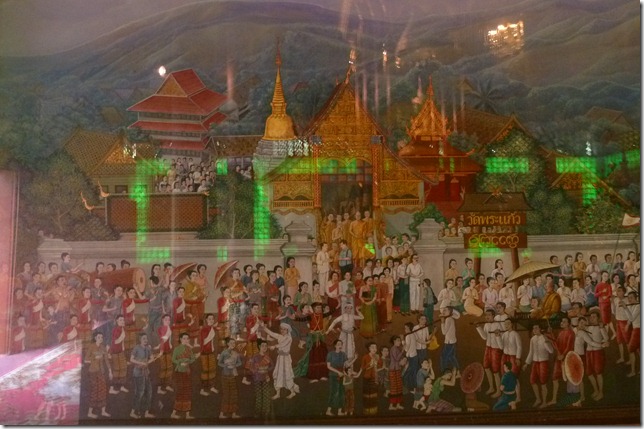 There’s a museum on the grounds as well, in a very nice building. A monk in there during my visit explained to me that the building’s only about ten years old; and related to me many other little tidbits besides. Some monks are friendlier than others; this one was one of the friendliest.

But there was another super-cool monk on these grounds (a few days later) as well. I quite liked this image, the monk with his novices in tow as like a mother and her goslings. 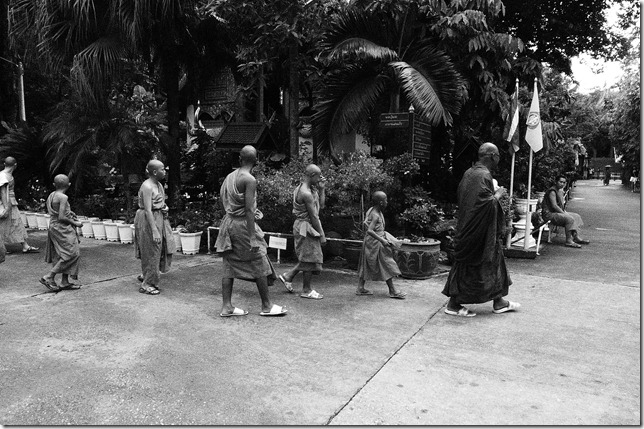 When he seen me going for the photographic preservation, he halted the troupe… 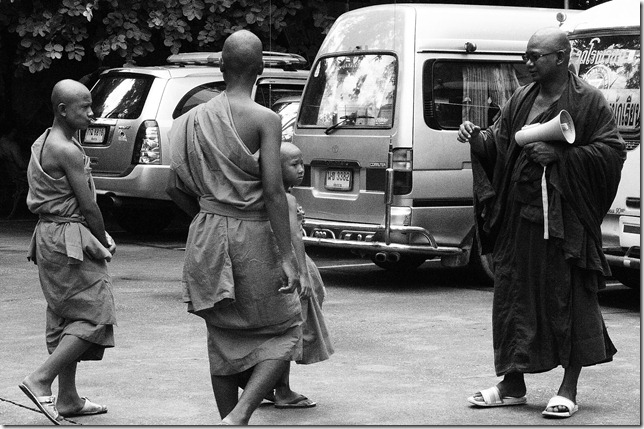 …and bade the littlest of the novices to strike a pose for the farang’s camera. Love the contrast with his companions’ informality! 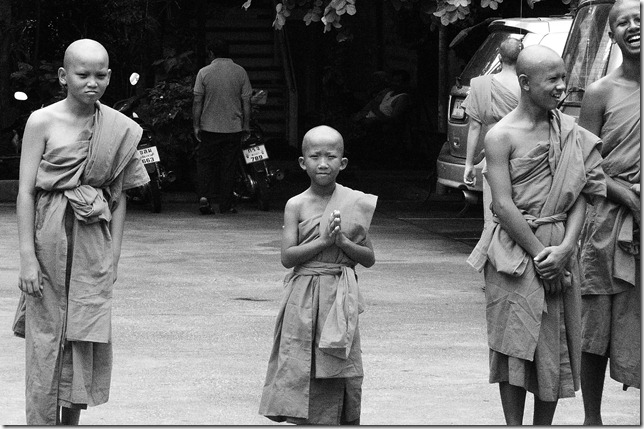 Anyhow, back to the museum; I must say that I prefer the Buddha images in here to the main attraction over across the way. These two, especially, I think quite nice. 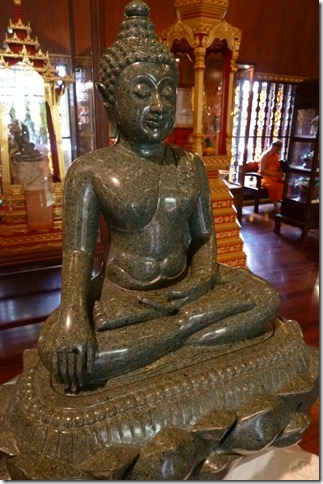 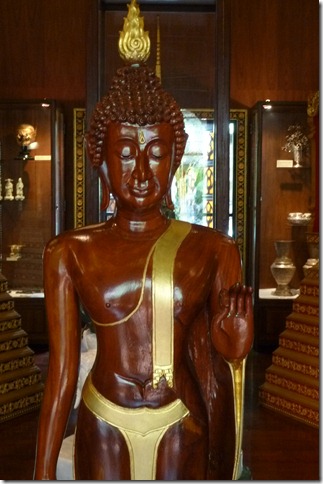 In point of fact, if it were only the Buddha images, I’d be rather so-so on the temples. I myself am more hot for the design and artistry of the buildings — and, of course, the murals. But some Buddha images do catch my notice.

Also housed in the museum was this dude. You know, it’s quite a service he offers; what with the time-is-money nature of to-day’s hustle/bustle world, and all. 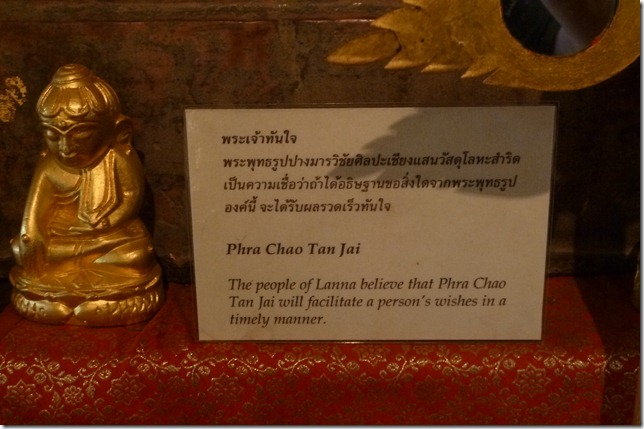 Went to go up this hill here to see what there was to see, and ran smack into this procession of novices. Probably just getting out of school, I guess. I was saying Hi to them and whatever; and one of them cracked me up pretty good by indicating my shaved head and noting, “Same same.” 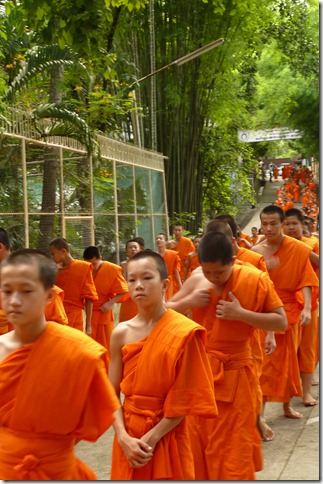 Over at Wat Phra Singh, a brand new hall knocked me sideways with its beauty. 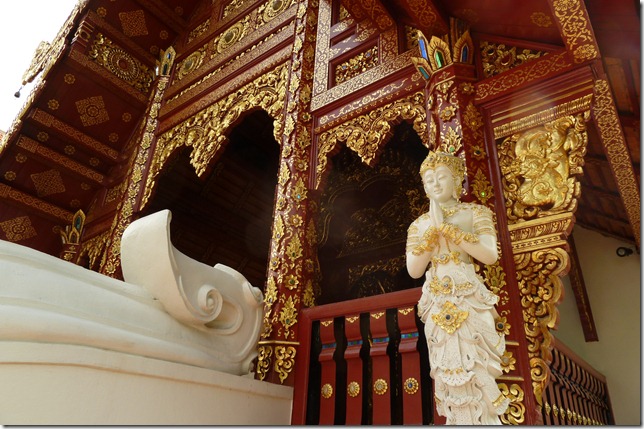 It’s so new, in fact, that the inside walls have yet to be painted. The muralist was there when I visited, busy getting ready to do just this.

As I was checking out the Buddhamobile… 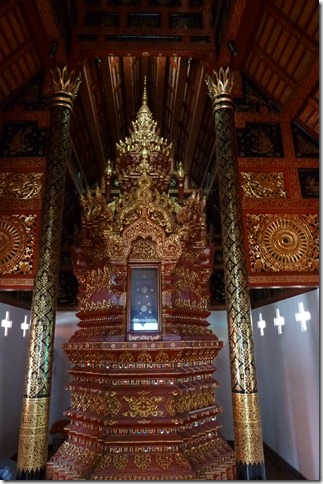 …the muralist showed me, from a book he had on him, the Buddha image which is going to be located inside. I asked him where the image is currently residing; but he said he didn’t know. He thinks it’s pretty old, though. (The Buddha, I mean. Well, perhaps the location is, too…)

He told me to go and have a look-see at the old temple hall, too. I assured him that it was on my agenda. It’s awesome, too; but not as awesome as the new one (if one were to ask  me, that is). 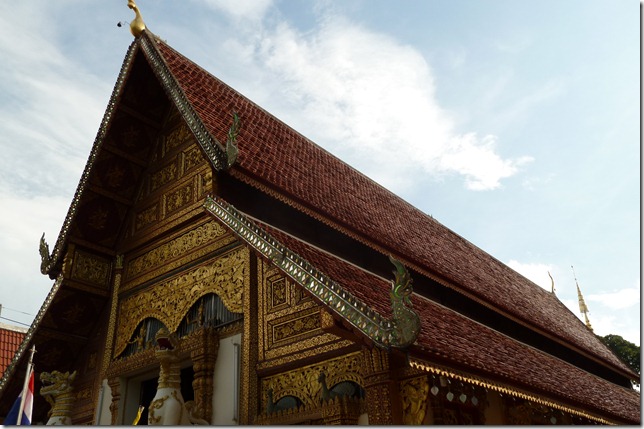 On Saturday, returning to town from the Black Temple, this one on the way caught my attention. 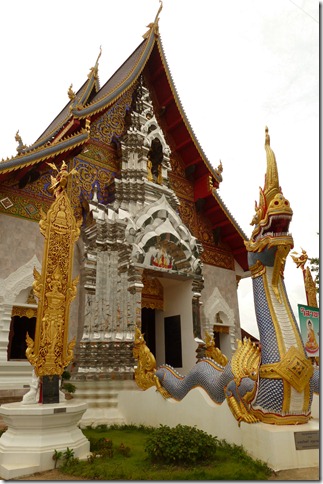 Don’t think I’ve before seen any Naga in light-blue; and am quite sure I’ve not seen silver, rather than gold, used in this manner. But heading inside while fiddling with something or other, was completely gob-smacked when I looked up to see this enormous marble-coloured Buddha. 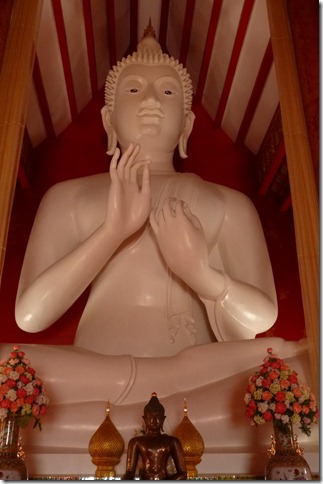 I’m always taken by surprise when I see one of these gigantic Buddhas, even when I’m expecting to. But when I’m not expecting anything of the sort, that first glimpse of it really throws me for a loop! Even notwithstanding its size, I found this particular Buddha most handsome indeed – though he didn’t seem to take well to photography.

The temple which comes closest to achieving the Chiang Mai temples’ soul-lifting serenity is Wat Klang Wiang. I couldn’t even get inside ‘til my third visit; as it was always closed. But something was telling me to keep checking. That something was right (not that the quality shows up in photos, natch). 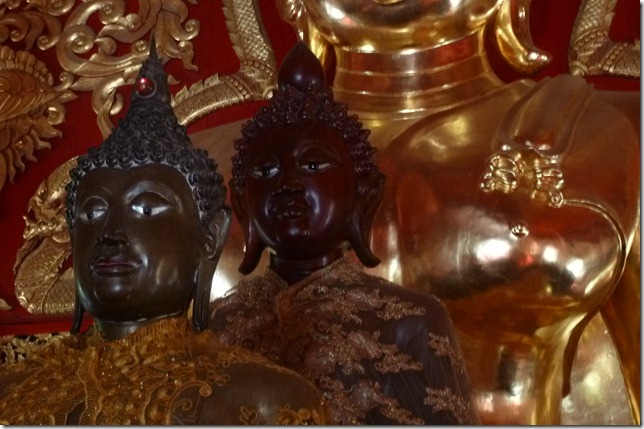 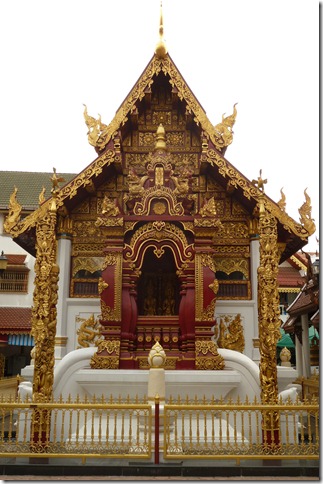 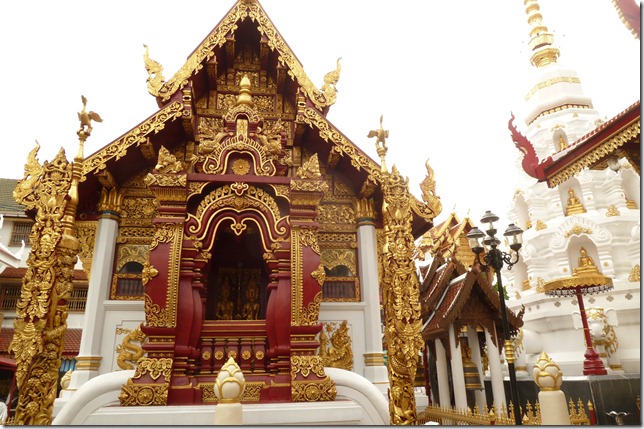 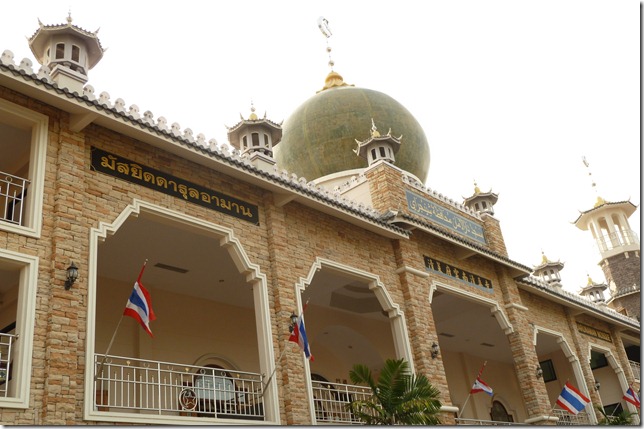 [dc]I[/dc] quite like Chiang Rai. If it would be possible to destroy all the fucking motorcycles, it would be so much the better still.

The clock tower here was designed by the same dude as is responsible for the White Temple. It’s the most beautiful I’ve seen in Thailand (many of the towns are outfitted with one); although it’s almost impossible to achieve a shot of which is unobstructed by advertising. 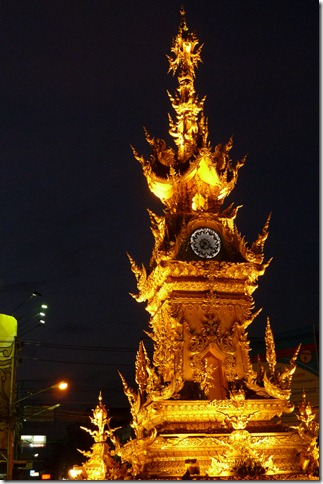 Can’t even recall where I seen this sign; but, I’m down. 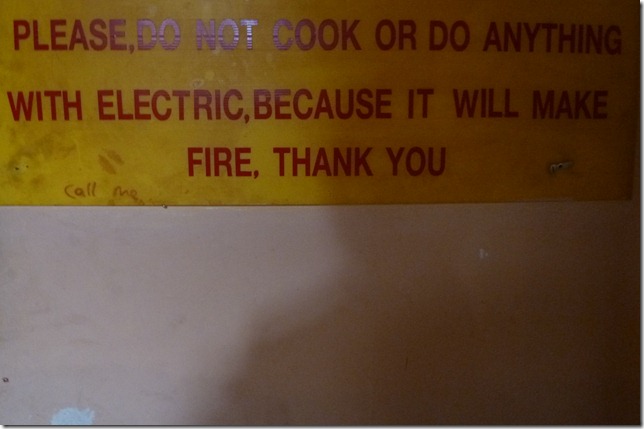 Thailand seems to have something of a Christmas obsession, one may have noted. Here’s the top of a  card table for sale at one of the shoppes. 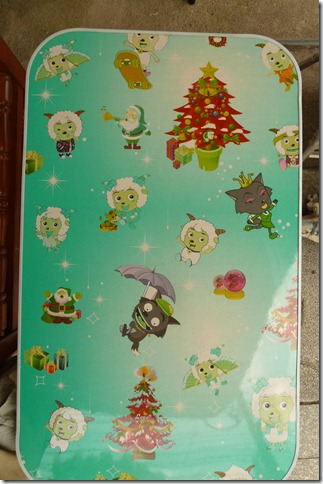 Yesterday, Tuesday, a funny thing happened on the way to this one teeny-tiny park near here to do some juggling and eating watermelon. It hadn’t rained in a few days; and this day was particularly hot, it seemed. I was sweating in buckets – nay, it was a river of sweat, just pouring out of me. I got to thinking, “Whatever happened to the clouds? Ain’t this supposed to be the rainy season?”

At this moment, I noticed that there were some clouds moving near. Some very, very, very dark clouds indeed. I adjudged that there’d be no time for juggling; and opted therefore to wolf down the watermelon straight away. After doing, walked back to the guest house with some purpose — but barely just enough!

Less than a minute after my having gained shelter, the heavens let forth with a complete walloping. Yoy, that had been a close call! A fine walloping it was, too; surely the finest since my first night in Nong Khai, way back in March.

Gotta love rainy season. This-here establishment has worked out a cool Hollywood-style method of letting the “rain” continue long after  the rain has stopped. If one is so inclined, as this gentleman was so inclined, one may have a sit and continue watching the “rain”, pretending that the storm is still going strong. (It’s kind of a fun option with which to be presented, is all I’m saying.)

The aerobics session here is very small; only a dozen or so participants. But I think the music is the second-best of any town’s, next to Lumphini’s. It’s held at the aforementioned teeny-tiny park – located, incidentally, adjacent the Chiang Rai Train Library, if you would believe it. (I mean to say: both if you would believe that this is where aerobics is…a-hah!, I almost wrote “conducted”; but will instead go with…held, and also that there is such a thing as the Chiang Rai Train Library. It’s housed in railway cars.)