Back in Vientiane, tired but fine.

Yesterday morning, Sunday, woke up bright and early and hoofed it down to the Kanchanaburi bus terminal. The ride in to Bangkok was about 15 Baht cheaper than had been the ride out, and took about one-half of one hour longer. Dunno; but it seemed a fair trade.

This sharply-dressed gent was going around to all the buses waiting to depart, and selling these books. Thinking they may’ve been puzzle-books, or possibly short stories? Whatever they were, he looked to be doing a pretty decent business. 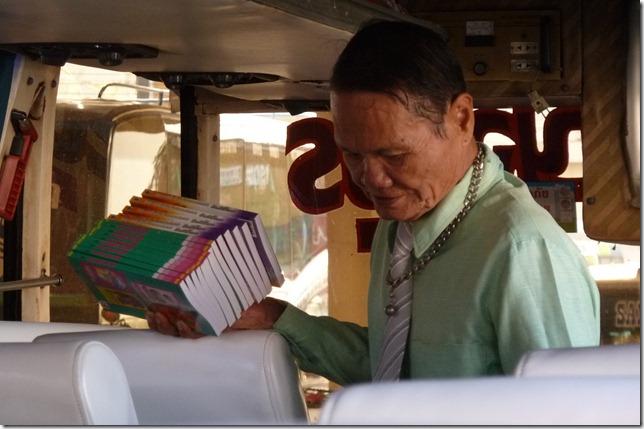 I’ve this concept in Seattle, I call it “bus-luck”. So, like, if you get to the stop, and the bus shows up within about a minute of your having arrived, that’s good bus-luck. Conversely, if you miss the bus by thirty seconds (i.e., it was within your sight) or so (i.e., somebody tells you it had recently come and gone), that’s bad bus-luck.

Some days, or weeks, seems to be all one or the other. “Wow, unbelievably great bus-luck to-day!” one might find oneself marveling. Or could be just the opposite.

Of course, the luck can be compounded by transfers. Example: you miss a bus by a few seconds, because there was too much traffic for you to get across the street. Maybe the next one comes fifteen minutes later; but then you’ve gotta wait thirty minutes to transfer to a connecting bus – though would had to’ve waited only five had you caught that first bus. In other words, that thirty seconds or less cost you forty minutes.

This example is not at all unrealistic – at least in off-peak hours; and it’s made even worse if it’s night-time and winter.

Anyhow, so we’re pulling in to Sai Tai Mai, and there’s the #507 pulling out of its berth. Arf, lousy bus-luck indeed. But wait! The bus I was on, instead of pulling all the way into its berth, stopped in the parking lot to let everybody off; and did so in such a way as to block the #507 from attaining the exit. So, I was able to indicate to the driver that I wanted on, he opened the door, and WHOOPS, that’s some frickin’ great bus-luck right there!

I would even call it about the best bus-luck conceivable, except that it’s kind of impossible to have bad bus-luck in Bangkok, what with there being so many routes, and each running with such frequency (ten minutes’ interval at most). If it’d been in Seattle, in such a far-flung location, on a Sunday, that little blocking maneouvre would’ve saved an hour; no doubting it.

So, got out to Khlong Toei and purchased three (count ‘em!) Durian, plus some mangoes, to take back to the park and eat; being that I had some time to kill before hopping the Night Train to Nong Khai.

Was joined in a quite lengthy and fascinating conversation by a Scottsman name of “Max”. Right off the bat claimed that Seattle is named after a town in England, and not after Chief Sealth.

We were talking about Cambodia, and I happened to mention that I really loved the music there. He quite agreed, and we discussed at length the joy of discovering obscure Folk musics. He told me of a band he says will knock me down two times, name of  “Gangagiri”. Some kind of kick-ass didgeridoo band, says he.

He continued to ply me with many interesting stories of his travels – in his zeal to stay in the rock-bottom cheapest accommodations, he’s been through the mosquito crucible on more than one occasion.

When he was ready to take his leave, he motioned to shake my hand; me protesting that it was all sticky with mango. Didn’t matter, he said, and proceeded to clasp my sticky hand with both of his. I thought this so odd that I began to wonder if he’d just somehow picked my pocket – but it appears not to’ve been the case.

As he was walking away, he re-emphasised the importance of checking out this band Gangagiri. I’ve located the website of the act in question; have yet to check ‘em out yet. The dude was pretty insistent, though; so you may wanna have a listen.

The train ride wasn’t so uncomfortable as I’d feared it’d be. I think those were actually second-class seats; although they were the cheapest on the board for this route. Maybe no third-class available for Night Trains? Anyway, at 250 Baht, it’s the same price as staying the night in Bangkok; yet here I am in Vientiane. Such a deal!

Out on the platform, waiting for the train to arrive, this wing-ding was going down.

Dude you see flashing the “peace” sign right there at the end came up and introduced himself. Name of “Sharif”. Several participants motioned for me to join in. But the thing is…

Okay! I made a chart. Here’s a chart for, like, if somebody’s been in Asia so long that their skin is as dark as the locals’, how do you tell them apart? Well, you could consult this chart.

God, how Thais seem of late to love to shake they booty! Maybe the heat is brung upon a general delerium? 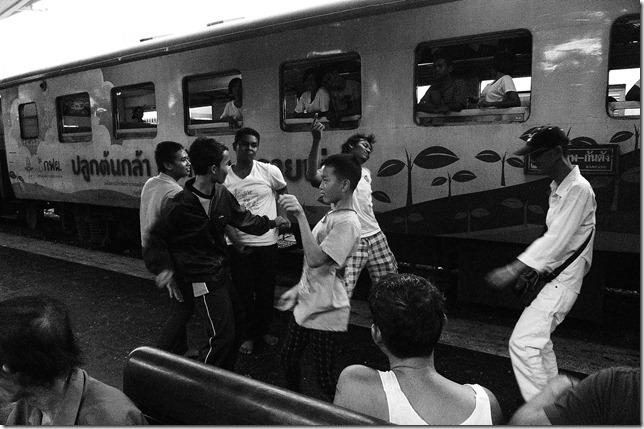 This guy was taking it all in in-stride. 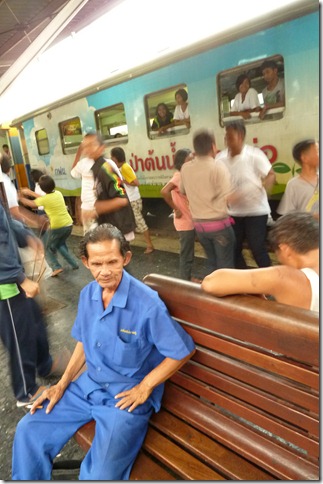 Arrived to Nong Khai at about 6:00 in the AM, and had a nice, morning-cool two-kilometre walk to the Frontier. Stamped out of Thailand like it weren’t no thing, and then began all manner of unexpected occurrence:

But hopefully there shan’t be a problem, and Wednesday evening will see me back on the Night Train to Bangkok…thence on to Chanthaburi for World Durian Festival 2012! (Still trying to work out where to stay in Chanthaburi, however – the pickings seem rather slim.)