Many Temples Were Visited, Many Durian Were Eaten

Yesterday, Tuesday, rose and shone nice and early to avoid the heat…and ended up being so enthralled by the day’s Temples that I kept on keeping on right through the hottest part of the day.

Bad enough. Worse still, I couldn’t find any of the One-Baht drinking-water stations, and didn’t want to purchase a bottled water, so I was thirstier than Hell. But it was all worth it. Luckily, one of the temples’ shrines had a water dispenser inside, so I was able to tide myself over with that.

Began the day back at the Candyland temple, a visit to which, you’ll recall, had previously been cut short by too-hot pavements coupled with the no-shoes mandate.

The inside of the main Phra is pretty spartan; but there’s a great aura in there. 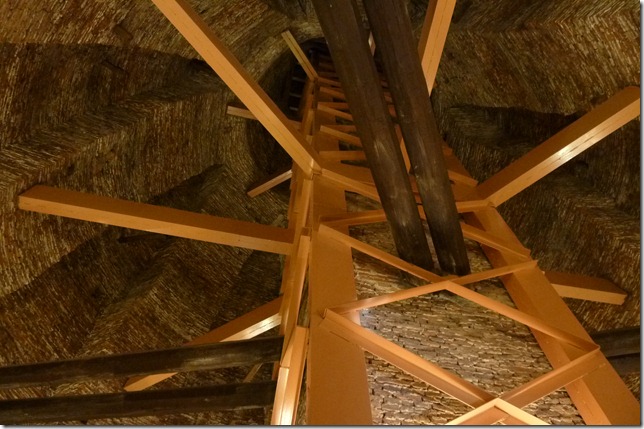 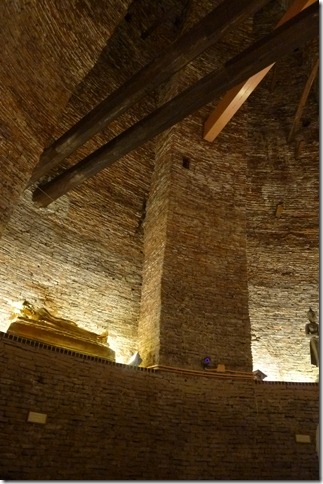 The exit tunnel, to the opposite side of the hall as the entrance tunnel, forces one to crawl on one’s hands and knees to attain passage. Kind of odd – but kind of fun! 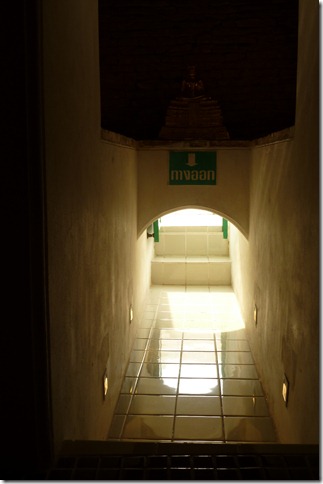 It may be a land of nine trillion Buddhas; but Gold Guy may want to look over his shoulder. 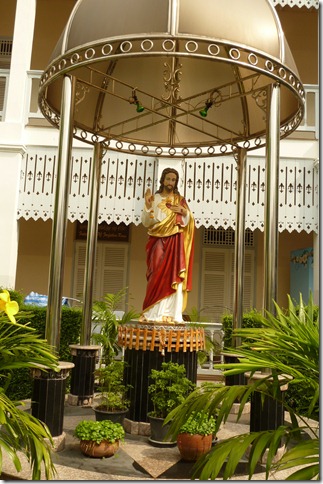 That’s one and counting! There’s a Catholic Church over there; but they wouldn’t permit me go inside, so, fuck ‘em.

Hoofed it back over to the East side of the river, and walking through Pak Khlong Talad, couldn’t help being entranced by this Witches’ Brew. In point of fact, it was the aroma which first caught my attention. Not that I’d want to be construed as an advocate for meat-eating; but one can’t deny the fascinating, almost hypnotic, allure of these Thai street-concoctories.

Wat Pho houses one of the most famous Buddhas in all of Thailand. But it’s also a huge, sprawling complex with many drop-dead gorgeous buildings, stupae, and shrines. 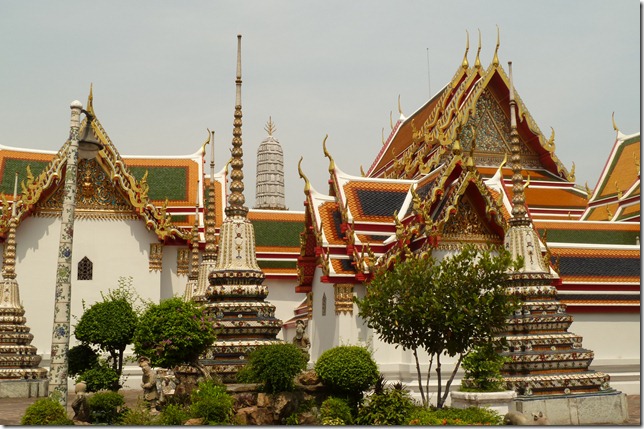 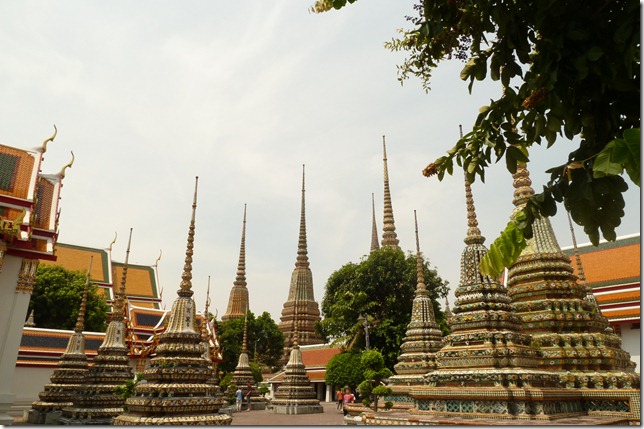 As usual, one’ll simply have to trust me when I tell you how magnificent are these structures when viewed in person. It’s a shame that the best time of day to view them in person (viz., during the midday, as the sun sets the buildings all a-sparkle) is also the worst time to try to photograph them. It’s how the cookie crumbles, alas. 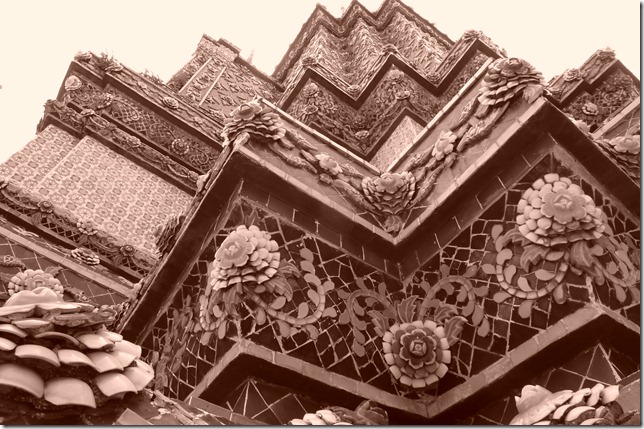 Thailand isn’t as Naga-crazy as are Laos and Cambodia; but this shrine is certainly proof that the Thais are able to bring the Naga with the best of them…when they want to, that is. 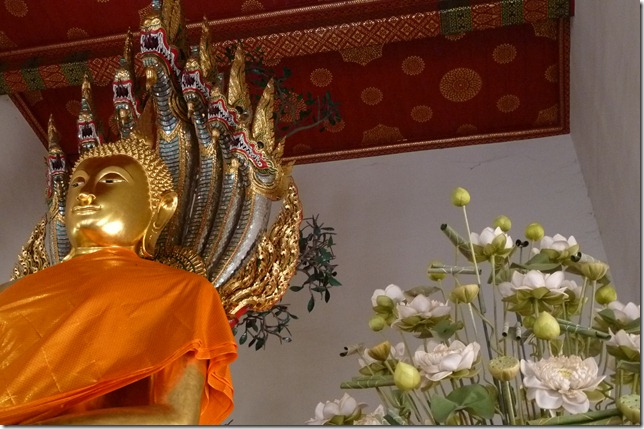 There are three or four Buddhas in mid-paint. Wanna know the god damned truth, I think they’re way cool as is; too bad they shan’t be left this way. 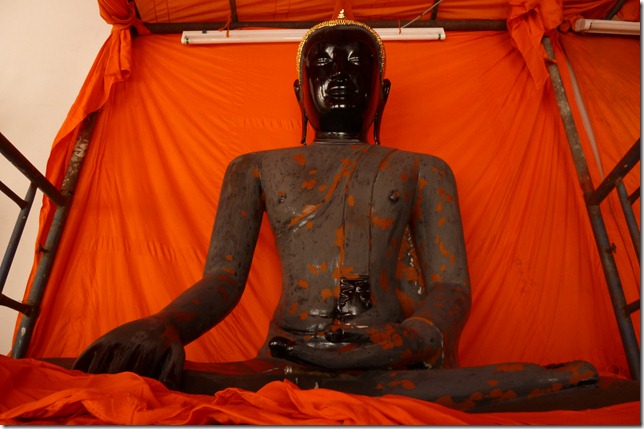 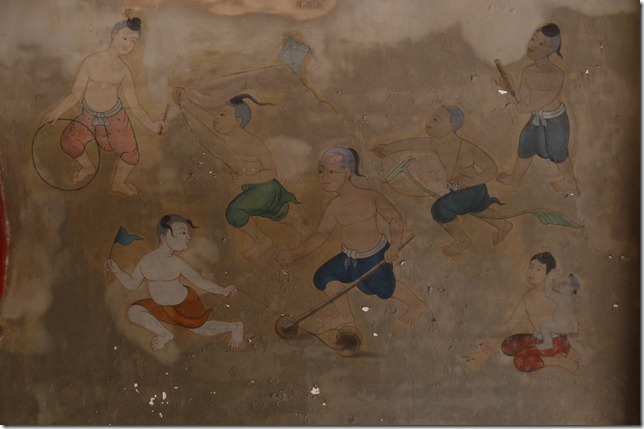 After wandering around the grounds for a couple of hours or more taking in the treasures, I finally could put it off no longer, and headed over to the Reclining Buddha to see about all the fuss. The first glimpse, through a couple of support posts, takes one’s breath away to another place. 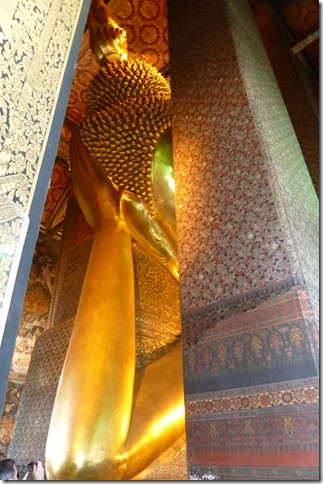 Here’re the long views of the front and back. 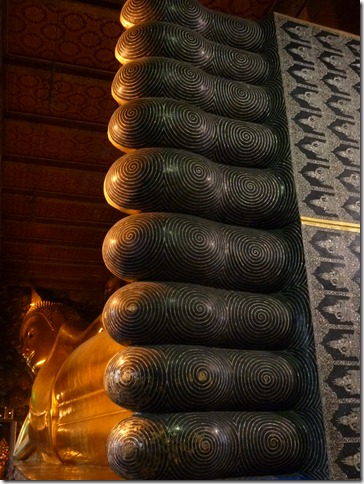 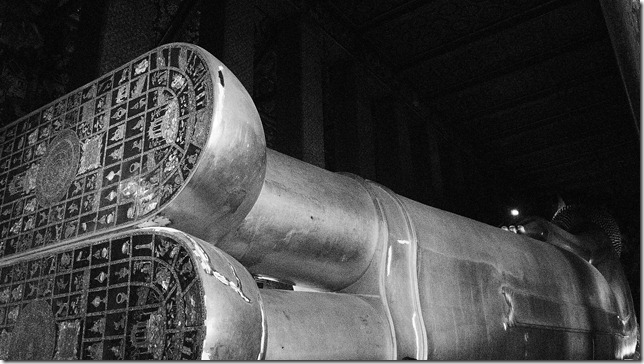 Some of the best murals in the entire complex line the walls here. 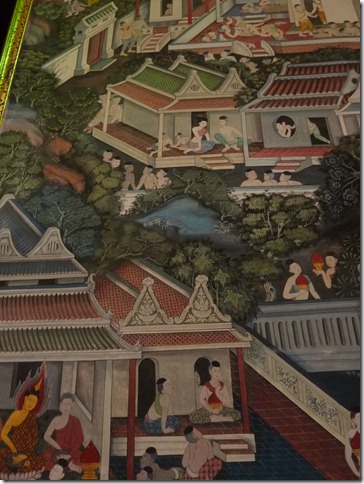 The place was lousy with tourists, of course. One part I couldn’t figure out while making my way down the front side, was what the Hell was causing that rhythmic noise sounding vaguely of a Pachinko Parlour (er, are there still such things as Pachinko Parlours?)? Rounding the feet and heading up the back side, I received my answer. 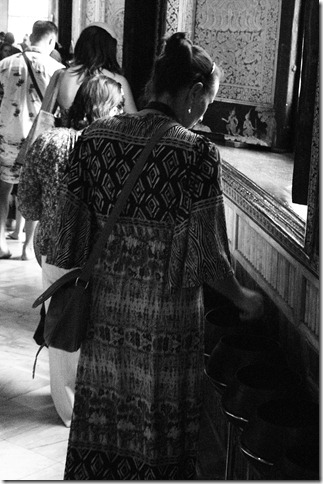 Hundreds of tourists walking down the aisle dropping coin into scores of metal bowls lining the wall on that side of the building. Never would have guessed! (Though, of course, it makes perfect sense.)

As I say, after having visited Pho, I elected not to pack it in for the day, but rather to soldier on; visiting three or four more temples in the vicinity. None of these were lousy with tourists even despite, really, they were every bit as impressive (though more modest in scale) as is big bad Pho. 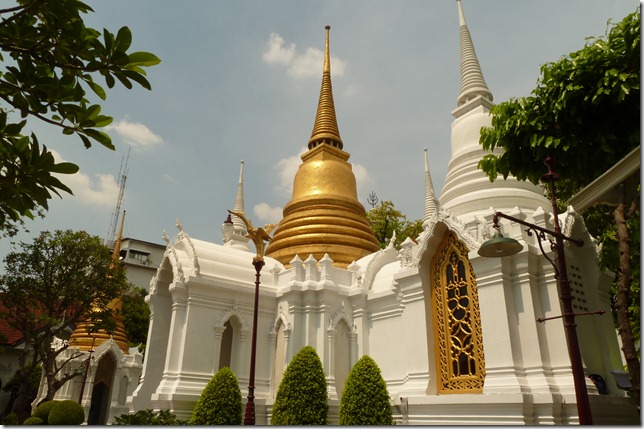 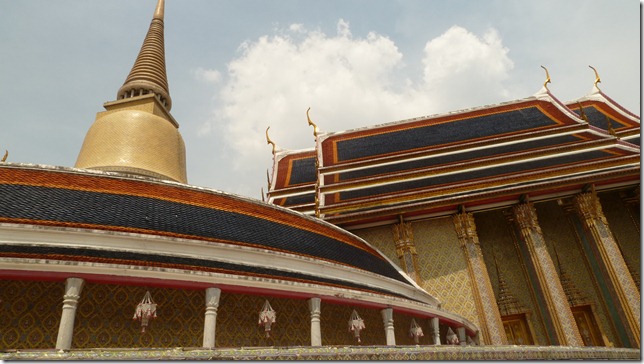 But amidst all the glitz and glimmer… 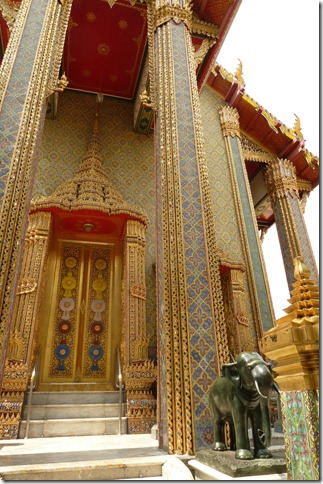 …the murals once again held their own in these-here temples. 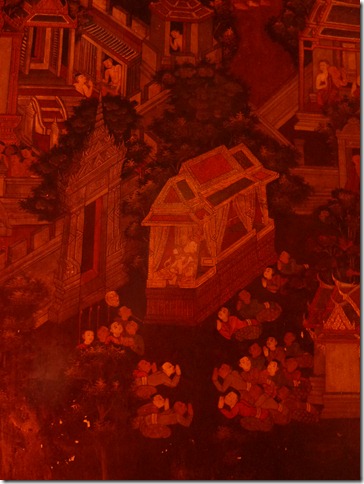 If you’re into this sort of thing, I have uploaded to the “Bangkok Temples”  Flickr set 300 pics from yesterday’s temple adventures.

There’re a few nice public parks in this area as well. In point of fact, Bangkok’s got some great parks full stop. But, save for Lumphini, they all seem to be sparsely populated. Kinda takes the wind out of one’s people-watching sails.

Last night, a Turkish/German hostel-mate name of “Ali” was eating vanilla ice cream from a rocks glass. “Hi!” exclaimed my enthused self, “Why don’t you make a root beer float?” But he knew neither from ice cream floats nor even from root beer! We didn’t have any in the fridge; and I think he thought I was just being a dumbass. But, shit, can you imagine a life without Root Beer Float?

Late into the night, Rata held forth in her inimitable manner, including which giving a fascinating account of the Thai Royal lineage. (The current King is not a direct descendant of the last pure-blood King; though there is a senate-member who is such; and speculation is that he may become the new King when the current King kicks the bucket.)

To-day, Wednesday, though, a lot of people – including the Japanese used-clothing merchants and the Finnish Chinaman — were leaving for various destinations domestic and abroad.

I had just polished off some mangoes, and headed inside to wash my hands, about to shed a tear or two at the forlornness of it all, and there at the reception desk was the Frenchman! You remember him, surely: the same one who’d expected to be in a “street fight” when we went to take pictures of Khlong Toei at night.

“Whoa! You’re back?” Yep, he was back. Had been in Chiang Mai for Songkran. I asked how the air quality had been, and he answered that it’d been quite poor shortly before the festival; but that during the festival itself, it was actually very good. So I could’ve gone there after all. But then, had I done so, I probably would not ever have been invited to join in gunnysack race nor, most certainly, tug-of-war…

He was in mid-season form right from the get-go; offering his opinion with regard to subjects as varied as the quality of Malaysian food (says that Indian food in Malaysia is actually better than it is in India – O, temptation!, when I visit in a few months’ time), smuggling liquor into Islamic countries, the best and worst countries in which to smoke pot if one is a tourist, and many more.

Soon enough, it all come a-boil as he rose up a sea of four-letter invective and splashed it down all over the hated Sarkozy (in absentia); first claiming that he (Sarkozy) will never get re-elected; then that if he (Sarkozy) does do, that he (the Frenchman) shall endeavour to expatriate to Canada.

Tonight’s me last night in Bangkok; so sad. Just when the Durian vendors are really getting to know me, too. I think they appreciate having a farang hanging ‘round their stalls, as the locals go in for under-ripe fruits, while I myself go in for the fully realised Durian perfection. Sorta helps balance the scales a little bit.

Decided to bite the bullet and go up to Vientiane to get a 60-Day Visa for $65 (including the entry fee for Laos). Had considered making a number of runs into Cambodia and Burma for fifteen-day renewal each time. But the price would end up being roughly the same; and there’d be the ever attendant worry of needing to be near a border crossing when the end of a given fifteen-day period would be drawing near.

So, I think this is the best way to go. But…I once again failed to resist the scandalously inexpensive third-class train fare, this time to Nong Khai from here; meaning, after fifteen hours on the third-class rails, my ass is going to be pleading for mercy – only to be made to suffer the same fate for the return trip a few days later. Oof.

After the sixty days, the Thai Durian season will be waning, and the Malaysian should be in full swing. So, I know what I gots to do then. Am still attempting to come to terms with the reality that, in the meanwhile, I shall have missed out on Folklife…

Anyhow, before Vientiane, it’s a little side-excursion to Kanchanaburi.