Much Ado About The Same Same

Ooh, I see that after it’d for all the World looked like they’d got to settle for a share of the Pac-10 crown, the Huskies have slipped in the back entrance for their second outright title in four years…and their third in sixty years! Now let’s see if they can lasso themselves a third consecutive Conference Tourney title. Bow down to Romar, yo!

Yesterday, Sunday, arose fairly early and took a stroll all the way down to the other end of the River Walk, and then all the way back again via the town’s main drag. Turned out to be much longer than I’d expected from eyeballing it on the map. But I left early enough that it wasn’t too hot; and so an enjoyable time was had by all.

The main – really only – activity engaging the townsfolk was the cleaning up of the debris left over from the previous night’s storm. There was such a huge quantity of leaves and branches being piled up that I briefly considered that this was actually a pre-festival beautification project. I hadn’t thought the winds had been all that strong for a sustained period of time. But then I saw some uprooted trees, and changed my mind back again.

The people in town are quite friendly; and somewhat surprisingly, given its remote location, rather adept in the ways of the English language. It’s a pretty nice town, until that old Thai bugaboo rears its head: too much traffic. You know, if they’d just outfit the Tuk-Tuks and the motorcycles with mufflers, it’d be so much the better.

Heard some drumming and chanting, and thought that this might be some kind of festival activity; but it turned out to be (I assume) a wedding ceremony.

As far as the temple scene is concerned, there are quite a lot of them. They’re – again, given the relative tininess of the town, as well as its far-flung location – exceedingly well maintained. Most of them boast very beautiful exteriors – seeing ‘em all a-glitter in the noonday sun; boy it’s a treat. But the camera (or at any rate its operator) is unable to capture the effect.

The town’s main temple, Wat Pho Chai is not only beautiful, but also kind of gives the Bangkok mega-domes a run for their money in the grandiosity department. 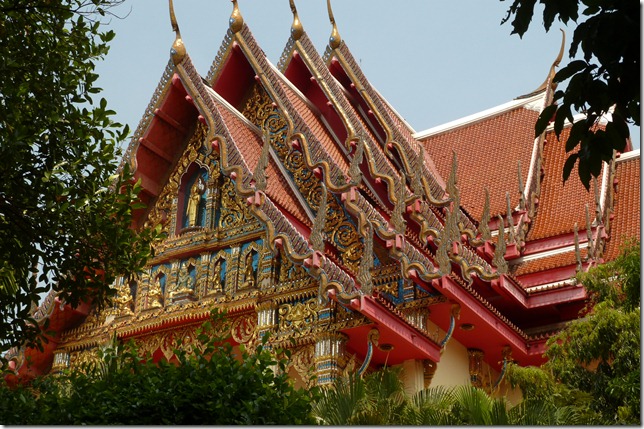 That is, until you get a look at the Buddha (the town’s most sacred), which is just this stubby little thing. 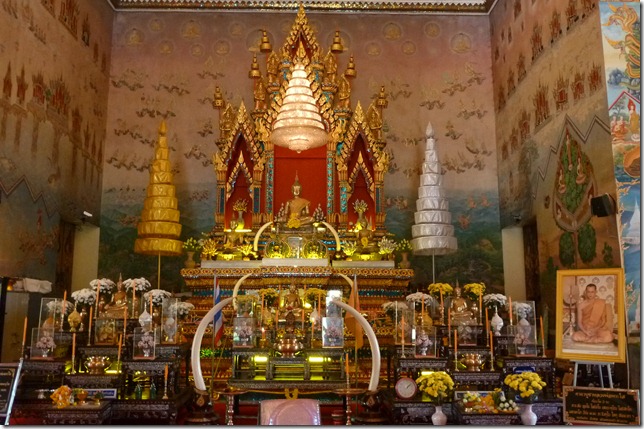 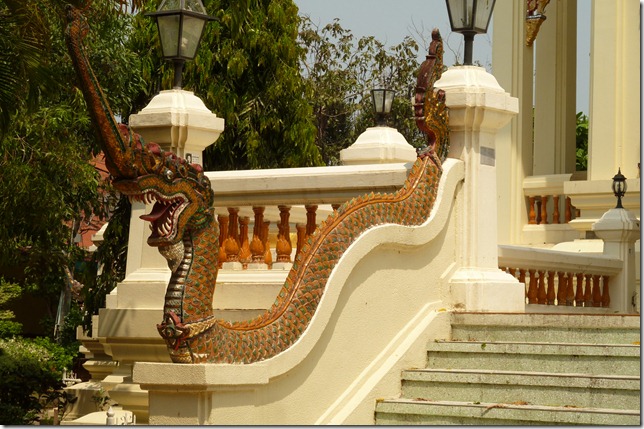 And the murals are quite good. 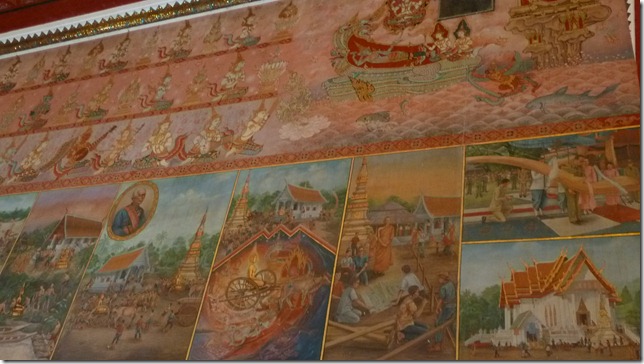 This temple will be the site, in two days’ time, of a ceremony honouring Maka Bucha day –  on which, according to Wikipedia, “The spiritual aims of the day are: not to commit any kind of sins; do only good; purify one’s mind.”

If it’s Enormo-Buddhas you’d be wantin’, there’s one absolutely gigantic one overlooking the river. 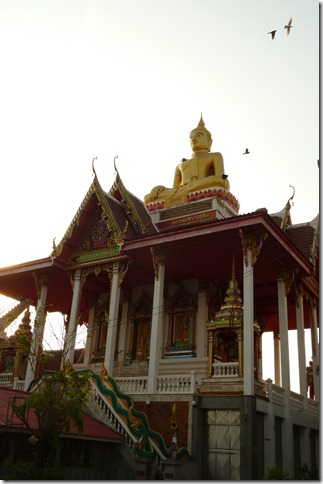 Uh, it looks pretty puny here – must be foreshortening or some shit, ‘cause this thing is gigantic.

Also some big Naga down at the river. 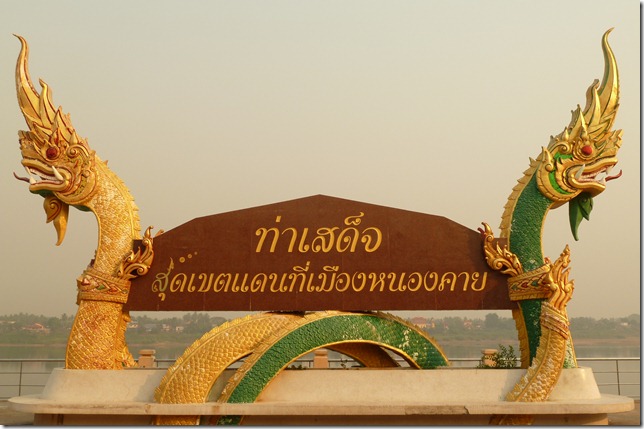 At one of the temples, a novice was possibly shirking his duties, instead playing with his toy helicopter. 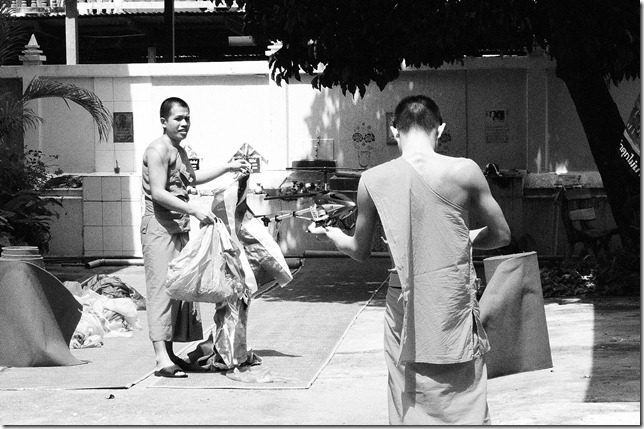 At another was – okay, you know you’re back in Thailand when the temple grounds double as a shopping bazaar for trinkets, clothing, and food. This was a new one on me, though: dude selling karaoke vids.

Mercy, that’s awesome! If it’d had the vocals in it, I’d have been all over that like shit on stink (even though I’ve not an optical drive in my computer).

Another temple had a number of quite beautiful murals depicting scenes from traditional Thai life – reminiscent of the awesome cultural museum in Chiang Mai. 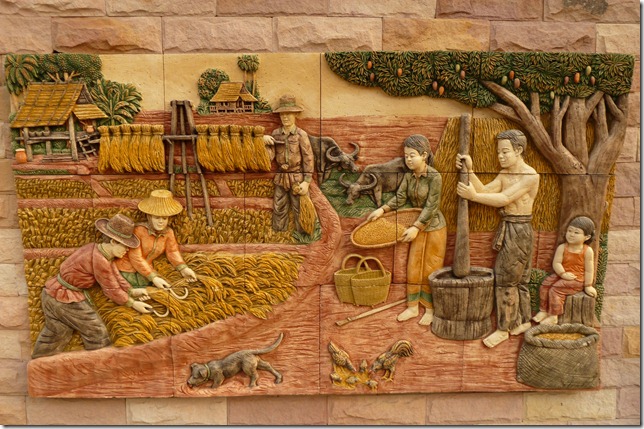 Now then, if ever you’ve wondered what it’s like to be walking along down by the Mekong river out in the middle of Nowhereseville, Thailand overburdened with fresh produce from the Market, and be passing between two open-air restaurants, one of which blasting the Creedence Clearwater for all its worth, the other with a sign on the wall reading… 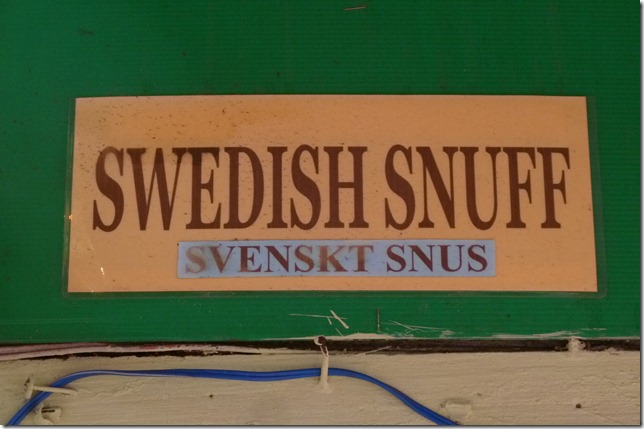 …if you’ve ever wondered what that’d be like: I can’t tell you. It happened to me, but the feeling was too strange to attempt to describe.

The River Walk here sure is lovely. It’s especially fine at sundown, with the beautiful colours in the sky, and the slight breeze making it just the perfect temperature to be out and about of an evening.

I’ve come up with a good name for a band: “Mekong Sunset”. Maybe even “The Mekong Sunsets” would be a fun variation. Feel free to use it.

No mosquitoes at this time, either. Odd. But lest you think that this means no mosquitoes at any time, needs must think again: they come out later, and seem to stay out longer. But it’s kind of an okay trade-off, as the dusk hour is such a fabulous time to be outside and not have to worry about them.

Was hoping for a redux of Saturday night’s weather histrionics; but it was not to be.

Monday, then, was Day 1 of the festival, “a wild street party, packed with stalls, shows, contests and sales,” “The Anou Savari Festival is a special event held only in Nong Khai.”

So I braved the heat to go check it out. What I found was…what one always finds in Thailand. Namely, endless rows and columns of stalls selling endless quantities of trinkets, clothing, and food. Wake me when it’s over.

This stall’s wares, at least, were colourful. 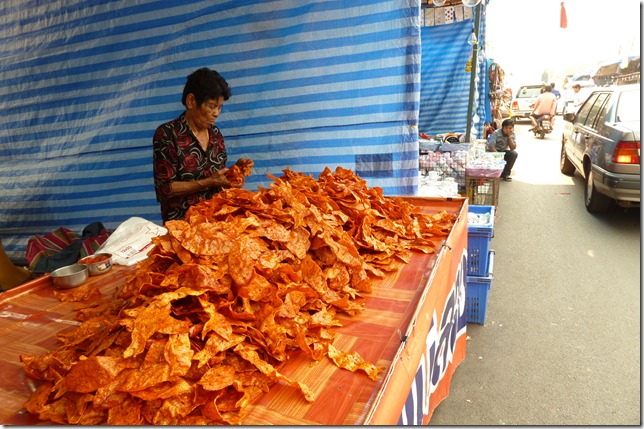 As I stopped to take a picture, the stall’s proprietor chuckled and made to me a declaration in Thai, eliciting a blank stare. He then asked me if I speak English – first time anybody’s asked me that before now! When I assured him that yes, I do, he continued, “What I said was that my business is going to go International.”

I laughed and said that, well, then I ought to be taking a picture of him. “I am very shy,” he playfully complained before granting a nice smile. A fun guy! 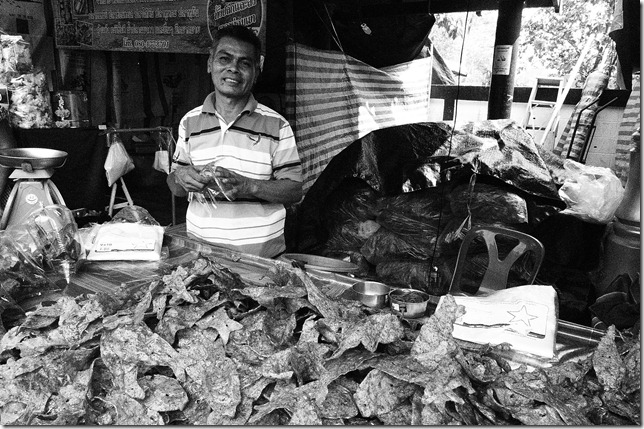 One new delicacy I had not yet seen… 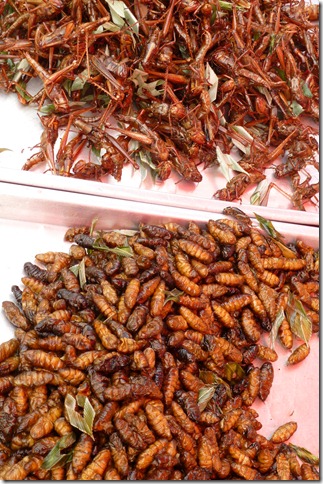 Of course, I’ve heard tell of Asians’ penchant for insect; but ‘til now, I’d not witnessed  it in the flesh. (Well, I’ve still not witnessed the actual act…)

Returned at night-time to find a huge crowd of people, sampling the vendors’ stalls. Also there were some tame Midway rides, carnival games, and BINGO; plus a half-dozen or so live music venues (none of the music I witnessed was in the least bit compelling, more’s the pity).

In other words, your basic small-town summer festival. Only, this one goes on for ten days.

I gather that there’s supposed to be a big tournament of the rattan volleyball game I loved so much from Chiang Mai – turns out, it’s called “Takraw”. I kept circling around again to check out the court; but every time, it was just teams warming up – never actually competing. I guess Monday must just’ve been warm-up day, and they begin playing for keeps on Tuesday?

The main attraction, at the City Hall, a re-enactment of the events commemorated by the Festival. 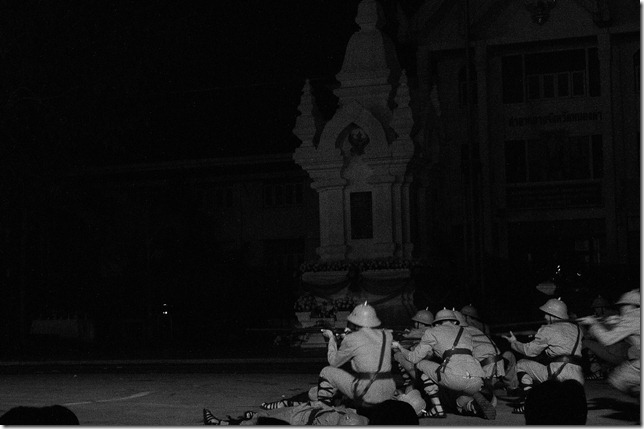 My interest not being held, I went and walked around for an hour or so; only to find, upon returning, that it was still going on. Damn, I guess they re-enacted it in real time! It was, in fact, right near the end – the grand finale was a pretty nice, if brief, fireworks display. 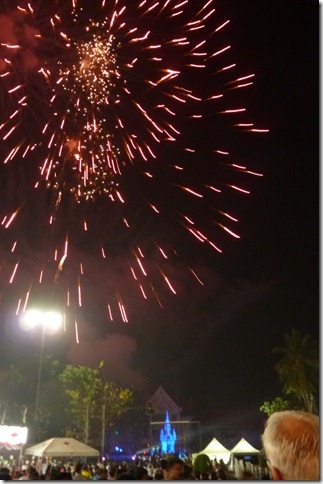 After that, people were departing in droves; and I did too. Returning to the Guest House, I seent an albino gecko. Later, heard some loud music emanating, so I guess the party raged on after all. This music actually sounded quite good; but I didn’t feel like getting out of bed to go check it out; presuming that other opportunities to do so will present themselves.