Began the day yesterday, Wednesday, picking up where’d I’d left off on Tuesday eve. In other words, I was yet to check out the temples on the other side of the Mekong.

On the way into town to get the cross-river ferry, I passed by the Buddha Factory. 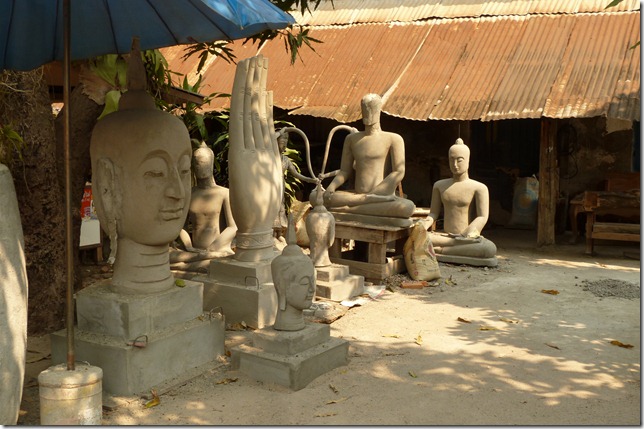 Departing the ferry-boat, was greeted with yet another method of keeping da flies off da meat. 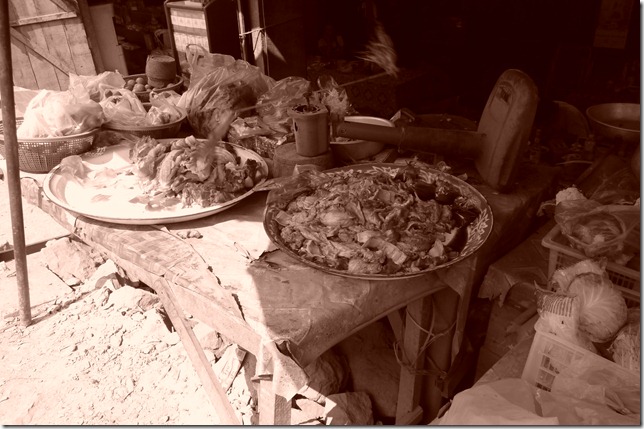 This is how we do it on the West Siyeede, bitches!

Up next, the Hell’s Angels of tomorrow (cop on the beat’s  already got his eyes on ‘em). 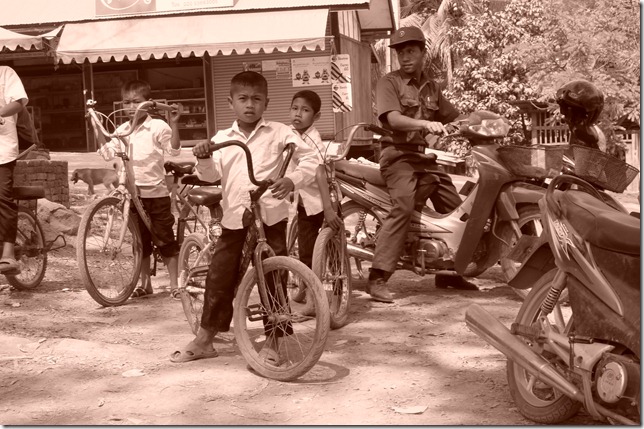 The West side of the river, as you see, is much like the North: small villages, dirt roads, friendly folk. Including this woman, out to sell some riverweed, but kind enough to pause and let me get my photographic kicks. 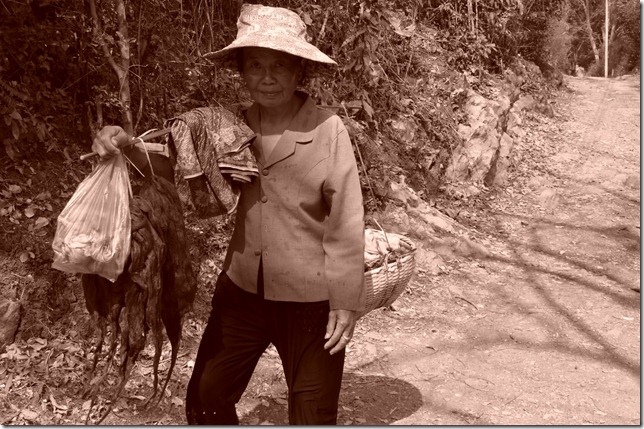 Walking through the village, yet some more Blair Witch Project action going on. Whoever’s responsible for these creations is sure to wind up depicted on one of the temples’ Murals Of Damnation! 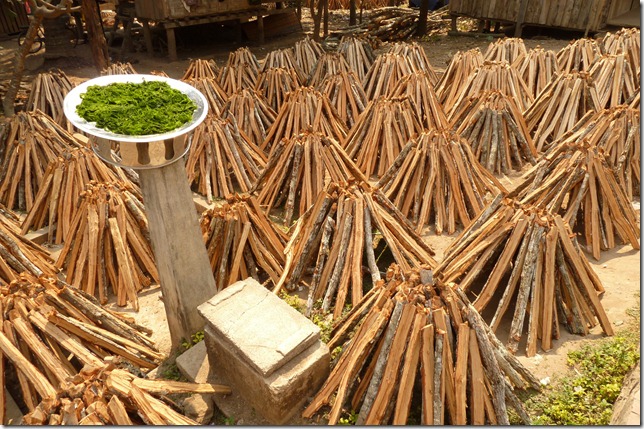 The game of choice for the youngsters was a to-me strange and enchanting horseshoes-esque affair, played with croquet balls. 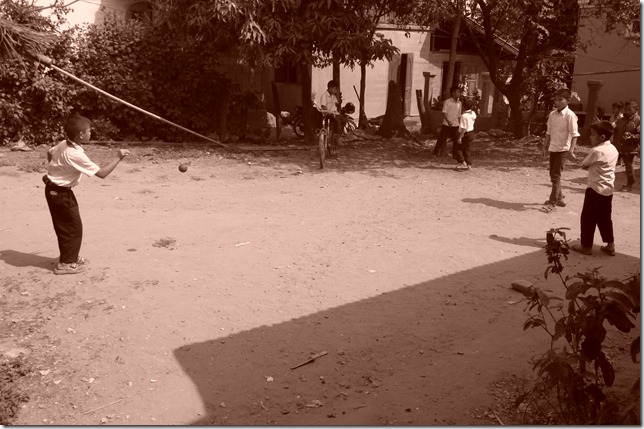 I couldn’t ever really make out the rules – but did note that cash was not changing hands. Later, Martin – my German dormmate – informed me that this is a French game called “Boules”. Looked it up, and discovered that he’s oh so correct. Thank gods for Germans!

Well, all the temples were right where the map said they’d be. But, problemo: every stinkin’ one of them charged admission. I just can’t go there. That slope is so slippery that I’m quite certain that if I were to even once pay temple-admission fees, I’d within a month be back in Patpong, turning tricks to scrounge up enough cash to visit the most obscure temple in the most obscure village in the most obscure prefecture in all of Asia.

My nearest sniff was this under-construction outdoor-Buddha, overlooking the river. 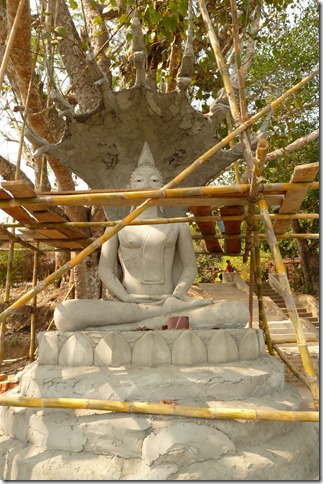 Hella nice view from this village (what else is new?). 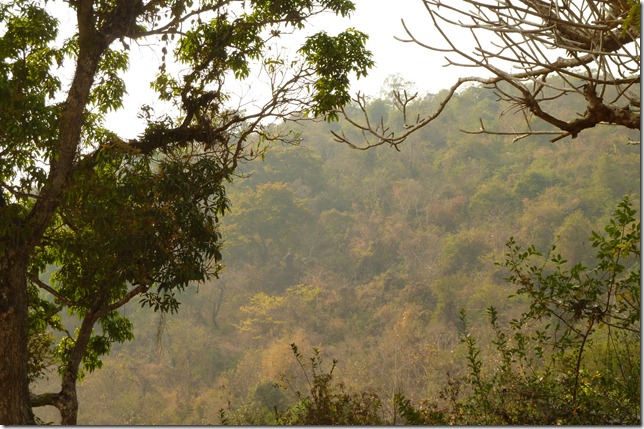 Would like to be able to hike up that hill – don’t know whether there are trails or not. Oh, I just remembered “Hobomaps” — a great resource tipped off to me by the Latvians back in Luang Namtha. Looks like there’re trails around the hill, but not up it. Drat.

Turns out, they don’t use the contraption to harvest Papayas; but rather, as I learnt walking through this village, this grape-like fruit. 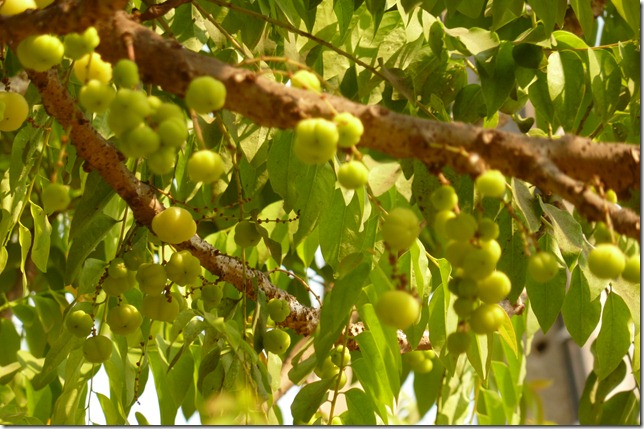 A young girl was out filling a jar up, and a man (presumably her father) appeared and told her that she’d got enough of them. Luckily, he spoke English as well, and told me that the fruit is called “Munyung” (actually, he didn’t know the English name for it), and allowed me to try one. Tastes kind of like a tart Apple, with a hint of Bell Pepper all up in there. Not bad.

As far as, if you were wondering whether villagers love their Beerlao as much as the city-folk and tourists do: wonder no more. 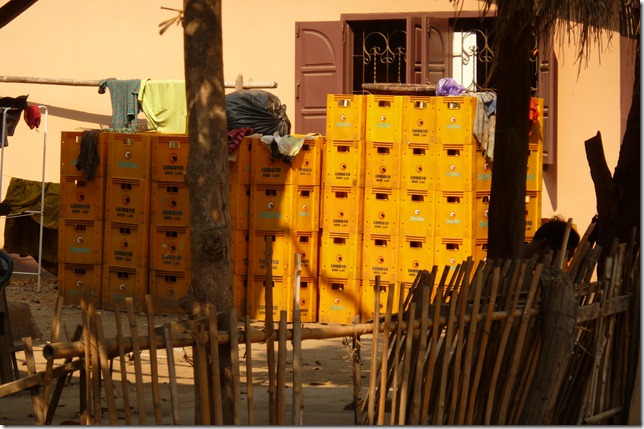 Even though I didn’t get to see any temples, a thoroughly enjoyable time was had on the West Side. Sitting talking with a very nice gentleman, waiting for enough riders to arrive to justify the crossing back into town; and after some time, he up and says, “Okay, let’s go,” and begins herding everybody onto the boat. Turns out he was the Captain.

The boat-captains and bus-drivers here are just too cool.

So, back in the city, passing by the school, and…another session of Boules! Two in one day. 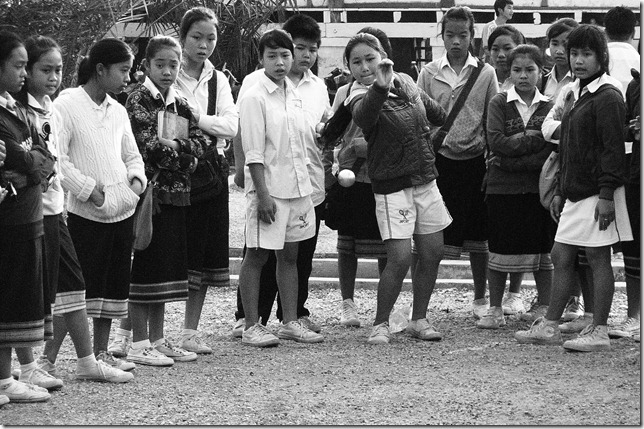 The citified Boules is a much more boisterous occasion that its village cousin.

A most interesting character was there viewing the game as well. 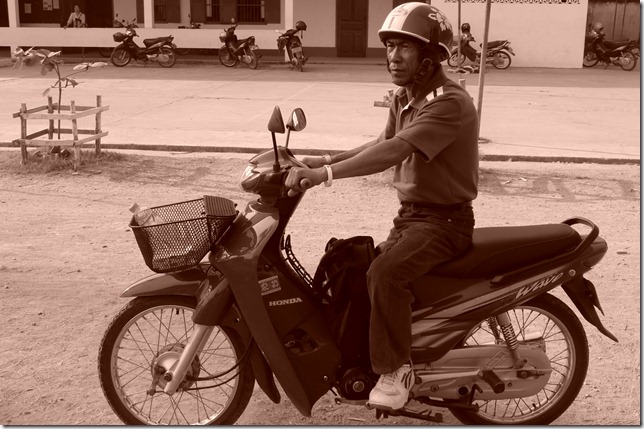 He never, for even a moment, took his eyes off the game – just watching it like a damned hawk all the whole time. I can only assume that he’s a big-league scout — although I confess to sometimes lying awake at night wondering if he is in fact The Buddha, come back in disguise. Either way, I rather love him… 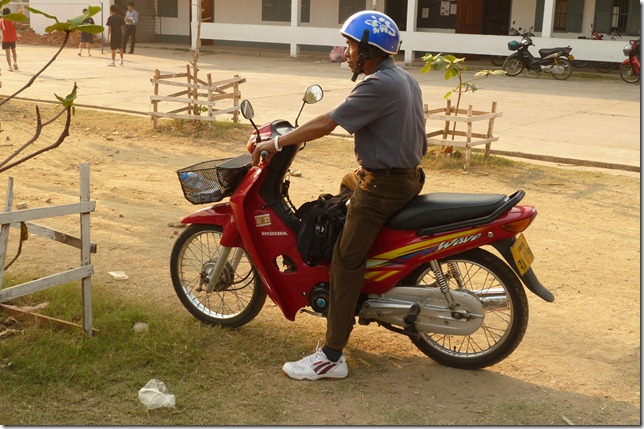 Look for more exciting Boule footage if ever I’m able to find a good Internet connection!

After wandering around for a while, I sat down on a bench to enjoy some bananas and watch the vendors set up their stalls for the Night Market. Was soon joined by a German couple in their early- or mid-sixties. The lady was over-the-Moon when I offered to share my bananas with them. The gentleman, not so much.

When I announced my place of residence, I was greeted not with hosannahs to Cobain, Hendrix, and ilk; but rather total silence…followed a few minutes later by the gentleman asking me, “What is the name of the town you are coming from?” Ha! Are we sure they’re Europeans?

After the bananas, I turned sideways to watch a kids’ soccer match being warmed up for. The “pitch” was a concrete temple-courtyard, set about ten feet below street-level. One shot on goal had a little too much loft to it, and…

”Oy! Look out!” I screamed as it became clear that the yard would not hold it.

“Oy!” repeated the Germans in unison as it whizzed right between their heads and bounded into a vendor’s stall. The vendor hid the ball under a little stool, and went on about her business.

After a few, a boy showed up looking for the ball; but it was like a Easter-Egg hunt, as nobody would hint him off to its whereabouts. Eventually, he did catch the scent, retrieved the ball, and returned to the game; chortles of laughter trailing in his wake.

Before leaving, I went down to check out the game. These kids were balls-out, mang: barefoot on the concrete, the keepers diving for balls and everything. As far as they knew or cared, it was the god damn World Cup final. 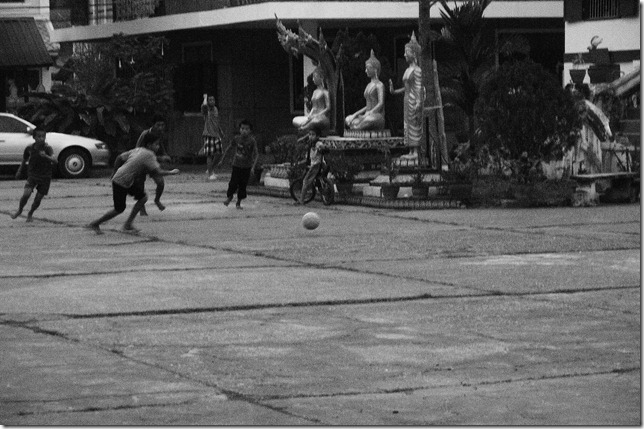 Standing there as night fell, watching the game and listening to the monks chanting their evening prayers inside the temple… 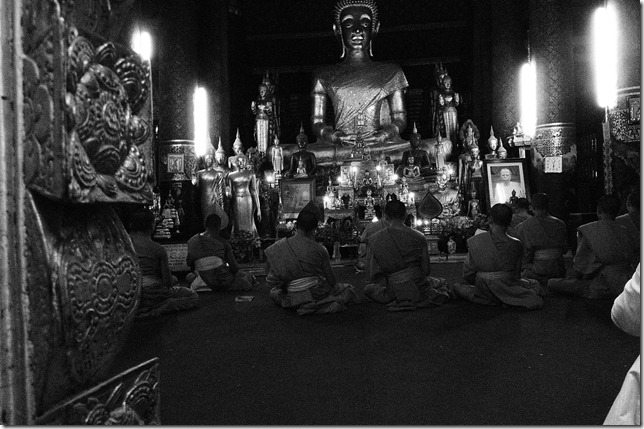 …I fell in love with Luang Prabang for about the nineteen millionth time.

Returning to the guest house, only a few blocks from, an Australian girl stopped me and asked if I knew of any cheap accommodations nearby. “Follow me!” I told her. “I brung you another customer!” I told the night-time staff-person.

Got to chatting with Elisabete, my Portuguese dormmate, about how much we loved Luang Prabang and Laos in general, and that we wanted to stay and stay and stay and never leave, and so on – and done lost track of the Australian girl. I went to check, but didn’t see her name on the big board. What?

I asked the staff-person, who informed me that she’d indeed registered there, in one of the private rooms. He thanked me profusely, but didn’t offer a finders’ fee.

Then, another jolt of coincidence.

Before returning to the hostel, I’d walked the Night Market’s food alley to take in the sights and smells. Chatted a while with a very nice gentleman whom, it turned out, owns a guest house in Nong Khiaw; he’s in town for some sort of tourism conference.

He’d wanted to know if I’d been there, and I couldn’t help gushing like a hepped-up Beatlemaniac. Yes! I love Nong Khiaw! I’m telling everybody to go there.

He wanted to give me a business card, as I’d told him I’m seriously considering a return visit. He was fresh out, however, and kept telling me, “Ling Tong Guest House,” over and over again.

“I’ll remember, I’ll remember,” I kept responding over and over again. He opined that his guest house was a little quieter and a little cheaper than the others.

So, later, I was trying to convince Elisabete to visit Nong Khiaw. Finally, she asked if I had any pictures of “this place”. As I began to show them to her, I couldn’t believe my eyes. 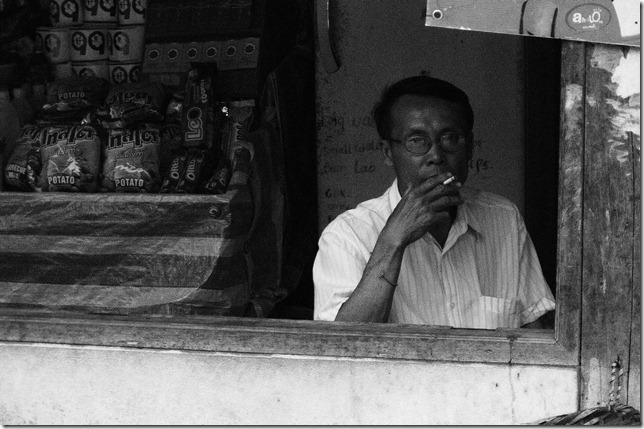 “Holy shit!” I wailed. “That’s the guy! I just met that guy like an hour ago!” Two weeks ago, a random photo-op; to-day, a fast friend. So weird!

This morning, Thursday, Martin, Elisabete and myself arose at 5:20 in the AM to go and see the monks. As they do in Chiang Mai, the monks go out in the pre-dawn stillness and receive alms from their city’s residents. 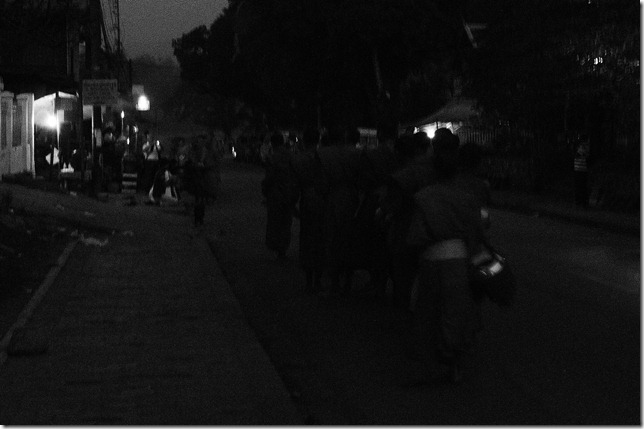 It’s a really big deal here – considered one of the must-see activities in any stay. There’re even rules of thumb for watching the monks – to do with not getting all up in their britches, nor taking flash photography, nor otherwise causing them discomfort.

It was a fine experience, worth doing. But nothing so Earth-shatteringly cool as one had been led to believe. A difference from Chiang Mai is that here it’s the novices, rather than any full-on monks, out to receive the daily rice; and the novices don’t offer a minute or two of blessings to the alms-giver (as do the monks in Chiang Mai). 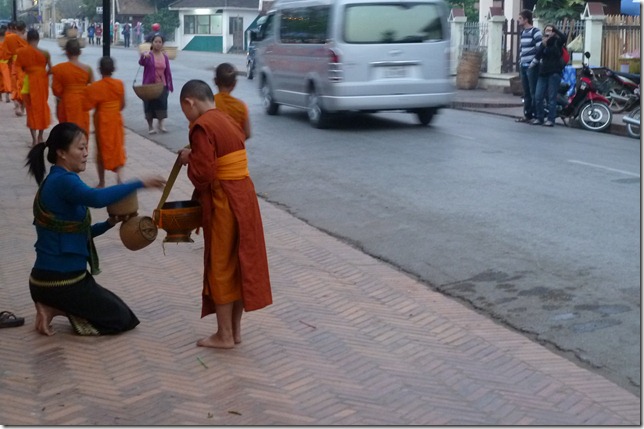 After the monkage, Martin and Elisabete went off in search of breakfast, while I headed to the Morning Market, which I’ve wanted to see in the early morning. Dawn had risen, so I expected the Market to be wall-to-wall patronage. But hardly any customers had yet arrive; and, indeed, many of the vendors were still getting their crap all set out on display.

Soon enough, though, the market was in full thrush. Here’s a nice colourful stall. 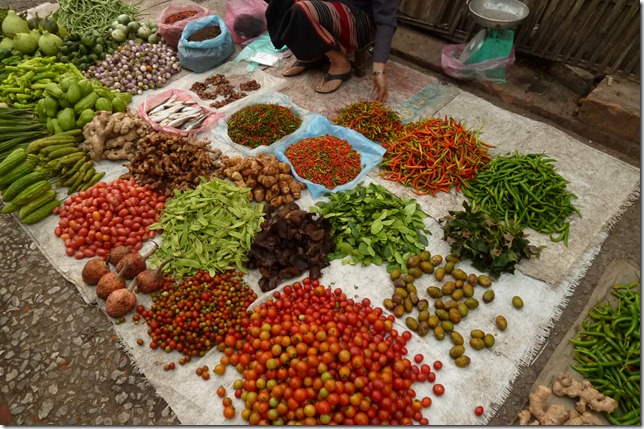 There were as many onlookers as locals – including, I do believe, an entire bus of Japanese tourists. It’s okay: gawkers can be as much fun to watch as about anything else. 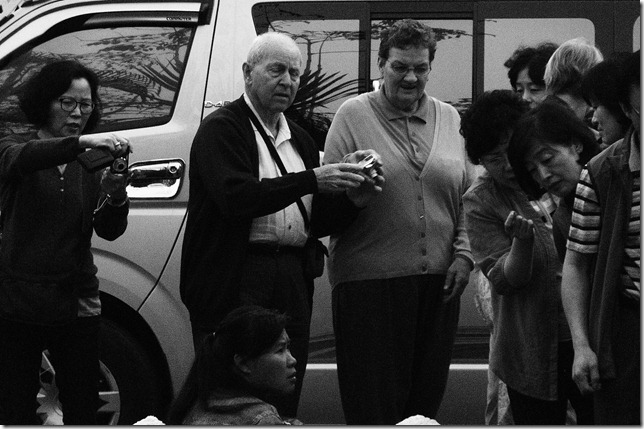 Returned to the hostel for some more shut-eye, to find that my German and Portoguese dormies had beaten me to the punch. After a few more hours’ sleep, and the shaving of my head, and the doing of some laundry, set out for a lazy day in town.

Wandering around some lanes I’d not yet wandered, I came across a temple with Husky colours on its outside! 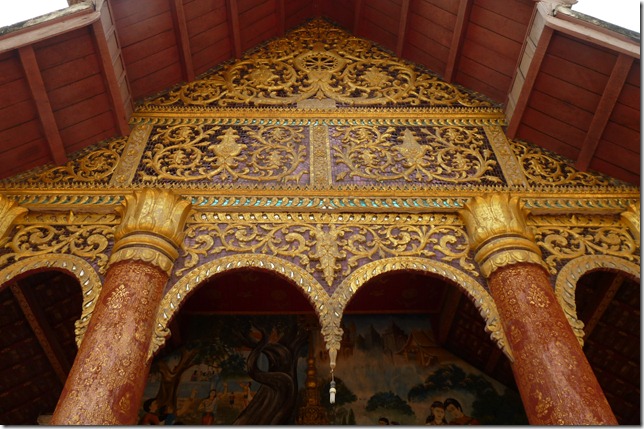 At the same temple, made what I think may be an important discovery. Namely that I do believe that Dr. J will be required to abdicate his title… 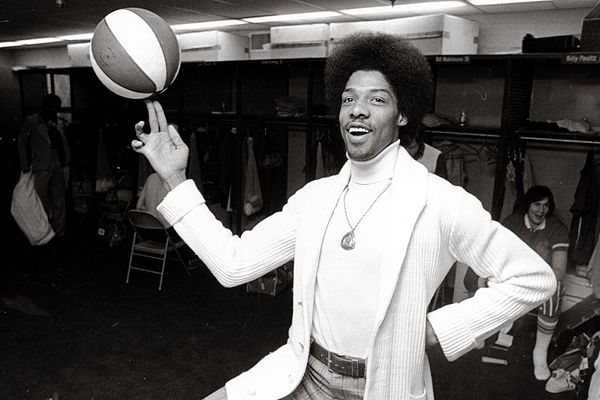 …for, the Ultimate Greatest Afro Ever resides right here in Luang Prabang – being worn by none other than… 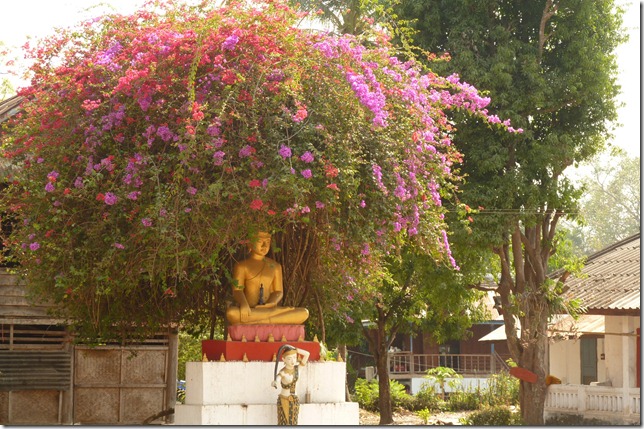 Sorry, J. Your rule was honourable, and it was true. But as all things do, it must on this day meet its end.

Later, yet another jolt. Sitting on the wall enjoying the scene on the river below, and from out of nowhere pops the goofy Russian from the dorm in Chiang Mai! The Russian-Facebook aficionado, and newly minted Sapodilla fetishist.

He was traveling with a friend name of “Olga”; whom he’d gone down to meet in Bangkok, before making back up through Northern Thailand, and then down to Luang Prabang via bus.

Small frickin’ world, it is.

Spent much of the afternoon down at the swimming hole (one of many along this stretch of the Nam Khan). The kids were diving off the rock… 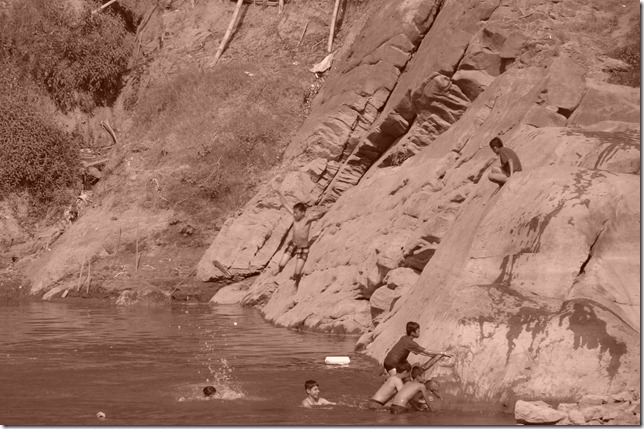 …and generally having a splashingly good time. 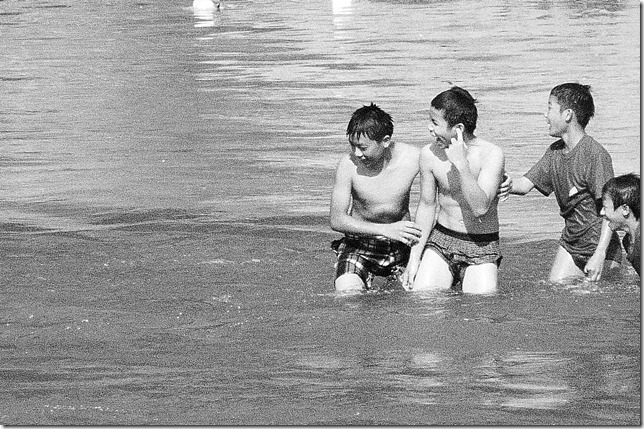 And they were right, too: so refreshing! I’ve possibly spent too much time seeing the sights and drinking in the culture whilst not enough time lazing it at the swimming hole. Just possibly.