Not Exactly A Manic Monday (Nor Tuesday, For That Matter)

There’s A Moon In The Sky Called “The Moon”
[Written Monday, February the 6th, Evening]

Lazy day to-day, as the sun was meltingly hot. Went walking around town, and down by the river, and up the street on this side of the bridge.

Gotta admit, I was beginning to lose hope; but this morning, my prayers were answered. 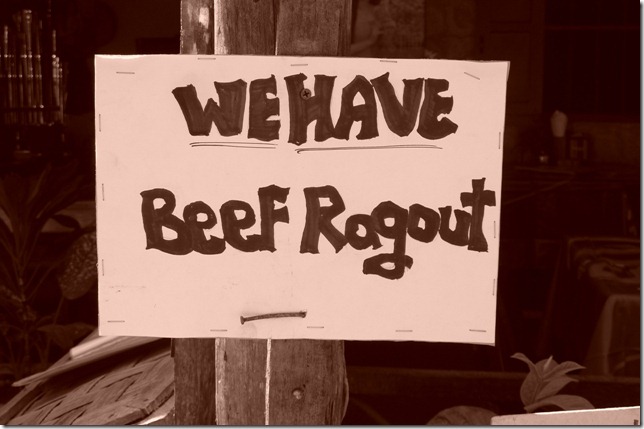 This side of the river is outside the village proper, and is where most of the guest houses and restaurants are located. But after a few hundred yards, the tourist stuff ends, and the road is lined with dwellings. Also a run-down little temple. Not much to it, but it’s got a nice feel all the same. 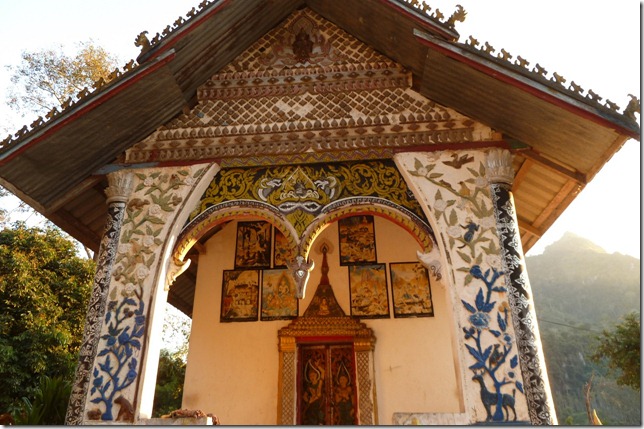 Inside there’s a really neat small wooden statue of a duck. Unfortunately, I didn’t realise at the time that my picture of the duck had turned out blurry. But I’ll be god damned if I’m going to let a bit of blur prevent me from posting such a lovely duck! 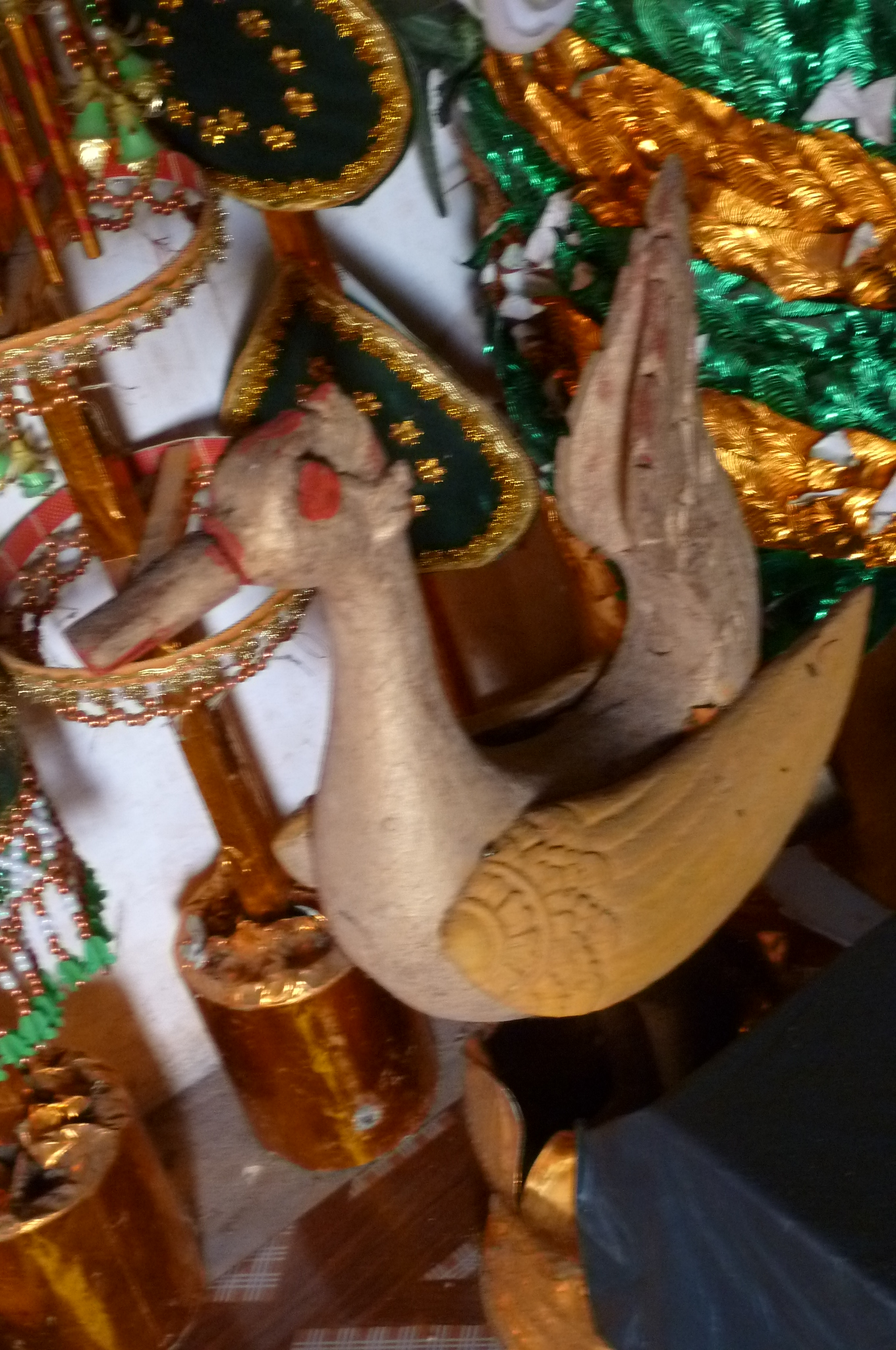 I wasn’t one hundred per cent for-sure that the temple was even still being maintained; but then I noticed a fire burning. Soon enough, out came a couple of Future Monks Of Laos, to put a pot on to boil. 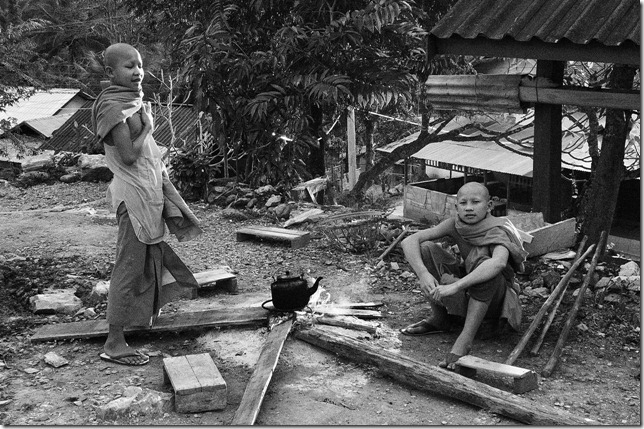 In town, passed by a covered gathering area with music blaring, down the hill a bit from the main road. Went down to check it out, and it was a big long table with people gathered eating. One of them called out “Hello!” to me, which greeting I returned in kind. He then offered me a “Whiskeylao”, but I had to turn that one down.

Whiskeylao’s counterpart, “Beerlao”, is reputedly the finest beer in all of Asia. Tomo and the Latvians didn’t disagree with this assessment, in case you wondered. 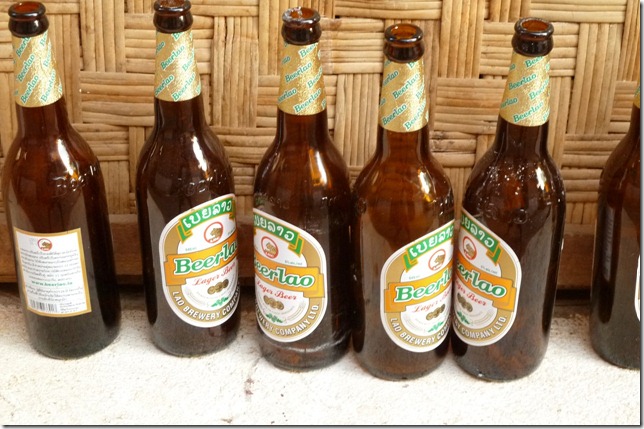 Huhn, maybe that’s why nobody notices the poor air quality here: they’re all soaking in Whiskeylao and Beerlao by 10:30 in the AM. Also at 10:30 in the AM, the pool hall was doing a roaring trade. 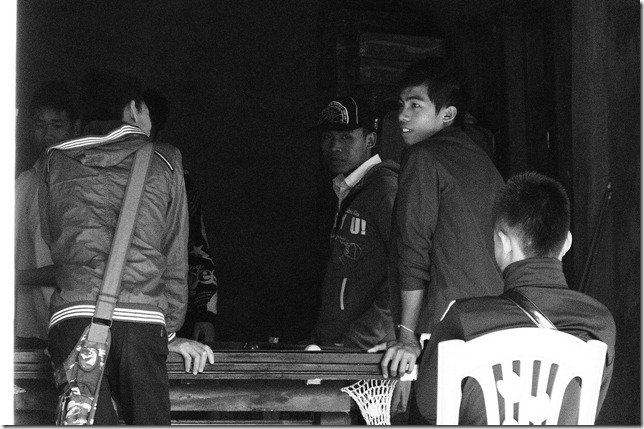 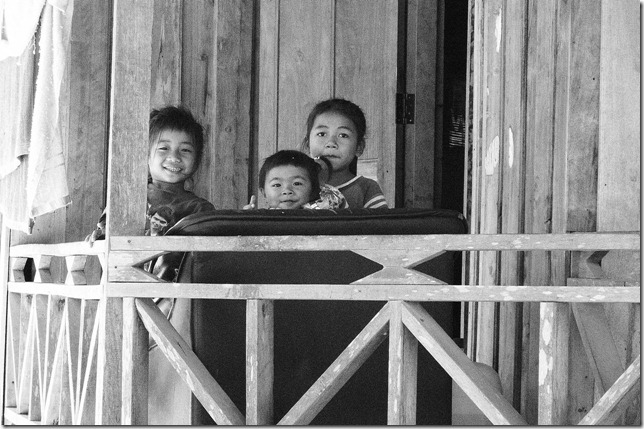 The photos I snapped to-day, though not very many in number, are some of my favourites of the entire journey. Just Lao people going about their daily lives, happy to let me intrude and capture it in beautiful black-and-white (or sepiatic) glory. What can I say? Even with the unseemly brown dot, I still love my camera to bits. 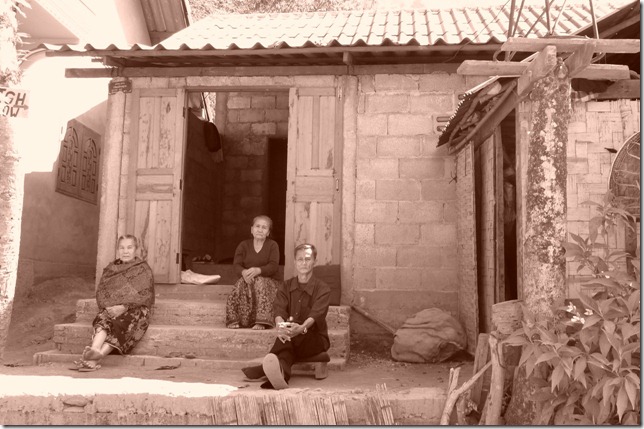 One interesting oddity is that there are satellite dishes everywhere around here. Did not notice this in far Northern Laos, but began seeing it yesterday on the bus ride from Udomxai. 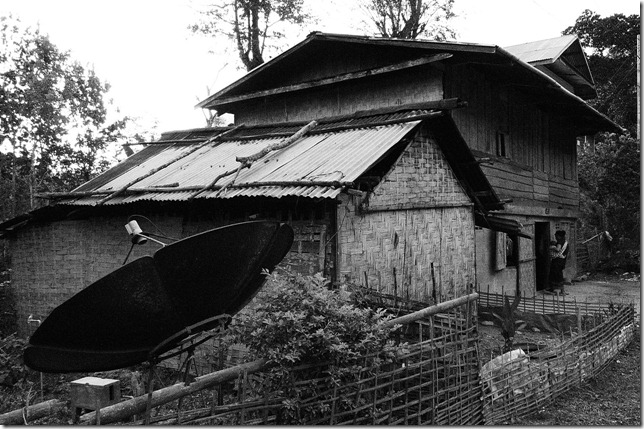 Even the humblest of abodes is able to replace The Buddha with The God Of All Gods. 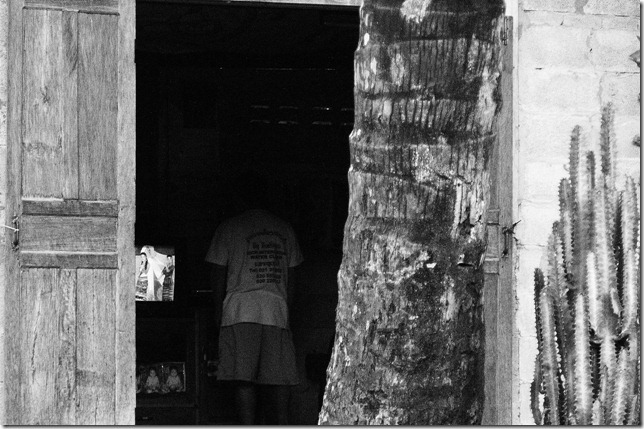 I love this town very much. If only there were a fruit market, I might just drop anchor here and remain for quite some time. But instead, it’s off to the big city to see if I can get me some food in my belly. 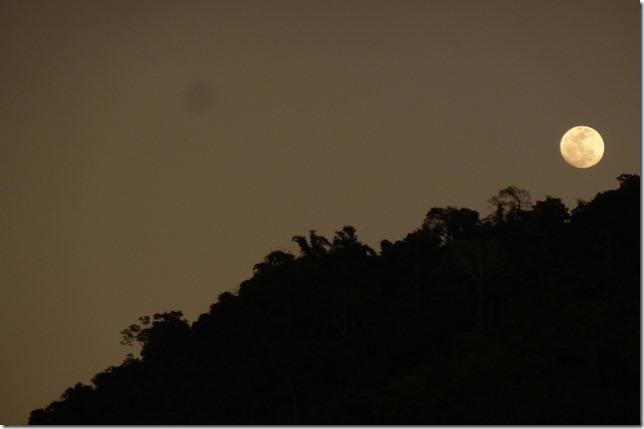 Don’t You Want To Buy Some Bone-Chains And Toothpicks?
[Written Tuesday, February the 7th, Night]

Somebody please feed me some god damned adjectives; for I am fresh out.

Checked out of the guest house, and set out to cross the bridge to the boat terminal, and ran smack into Tomo. He’d decided not to go to Phongsali, as he didn’t feel he had the time. Instead, he’d stayed three nights in Luang Namtha (nuts!), and then busted all the way from there to Nong Khiaw in one day.

He was getting on a boat as well; but he was headed to Muang Ngoi, a village with no road to it. It’s supplied by boat, and uses generators for power; and at 10:00 in the PM, the generators are turned off. It’s apparently more beautiful that Nong Khiaw even. But I wasn’t keen to hear the sound of generators all the day long; nor did I expect to be able to find much in the way of good fruit there.

So, I opted to boat it to Luang Prabang straight away; Tomo promising to see me there. Sign on a restaurant window in town says to buy tix to the boat on the day. But when I got down there, at 9:30 in the AM, was told that the boat had been sold out, but to put my name on a waiting list, ‘cause they’d send another if there were enough demand.

Turned out, we had the second boat almost full up, so, no problemo. Weird thing was, though, I was sitting there waiting to know my fate, and the ticket-seller told an inquiring gentleman that he’d not be able to purchase a day in advance, and to just show up at 10:00 in the AM. Then, he later told another gentleman that he could sign up for the next day’s boat after 2:00 in the PM. Needs to get his stories straight.

But, hey, everybody who wanted to ride to-day was able to do so; so: no harm, no foul.

When I was getting ready to purchase my ticket, a Frenchman came running up and told me that he needed to cut in line because his boat would be leaving in five minutes’ time (or what), and blah blah. But before doing, he asked, “Do you accept?” Sure. Hell, the query was worth the extra waiting!

He needn’t have worried, it turned out. Once they got all the boats to all the various destinations loaded up, we sat around and waited for a good half-hour before heaving-ho. Why, I could not say. However, if the experience at “Passport Control” (tee-hee…

A nine-digit number
For every living soul
That is all they talk about
At Passport Control!

…) was any kind of example, I should guess that we were waiting for the captains to finish taking their luncheons.

So, we set off for Luang Prabang. And the whole time I just kept thinking, “Damn, I just want to keep looping back around and taking this trip again!” It wasn’t cheap – about fifteen bones – but it was money exceedingly well spent.

The scenery was tip-top. Not so much that it was better than, say, the scenery in the American West; but that it just came at you, non-stop, for the entire six hours’ journey. There was one point, for about five or ten seconds, that I thought, “Well, we may be coming to a sort of boring stretch here.” But then, whoop!, we were right back into the good stuff.

It was mountains, cliffs, water, foliage to beat the band. Here’re a few good examples to whet your appetite. The  remaining items can be found, as per usual, at the goddam Flickr page. 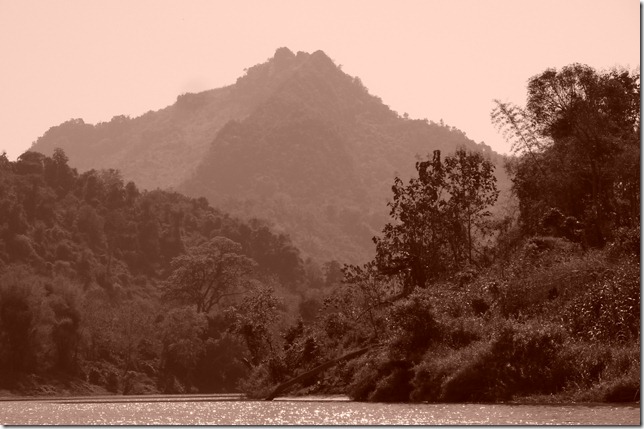 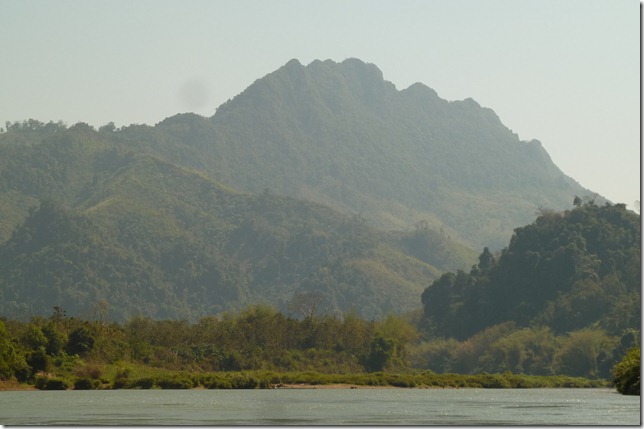 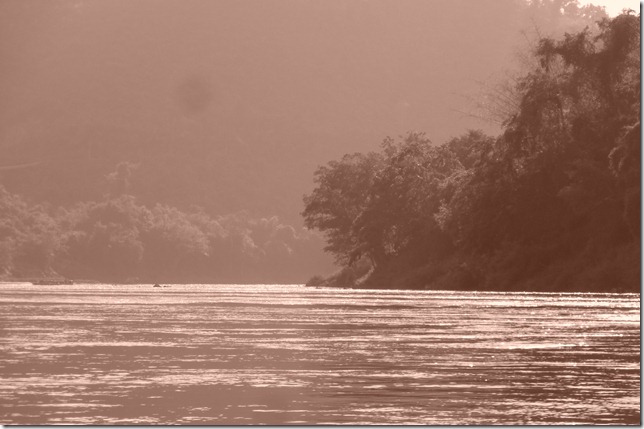 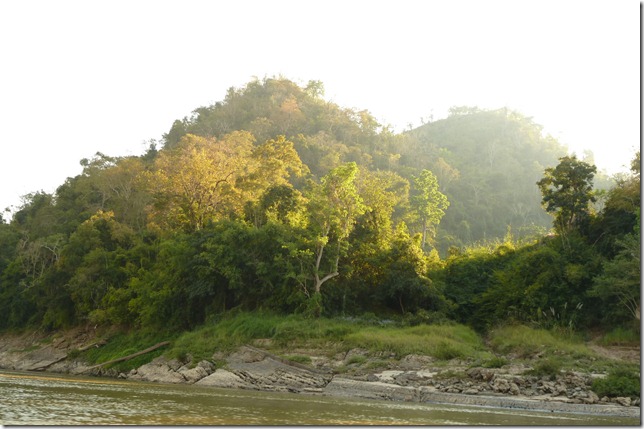 In addition to the scenery, we along the way witnessed many an ungulate… 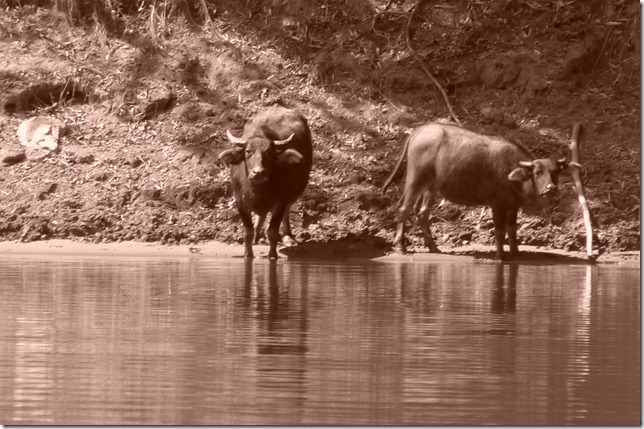 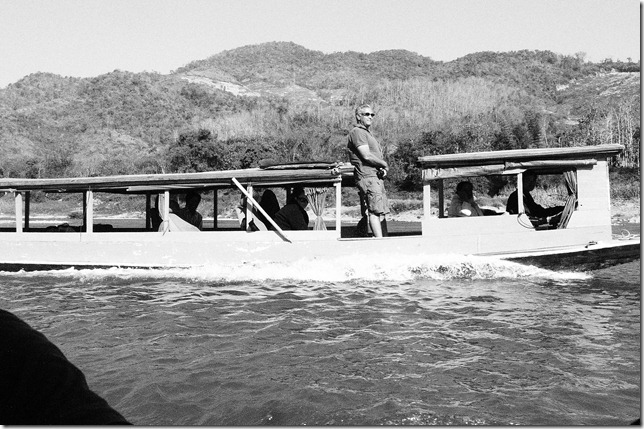 …and a great many locals, out earning their honest days’ subsistence. 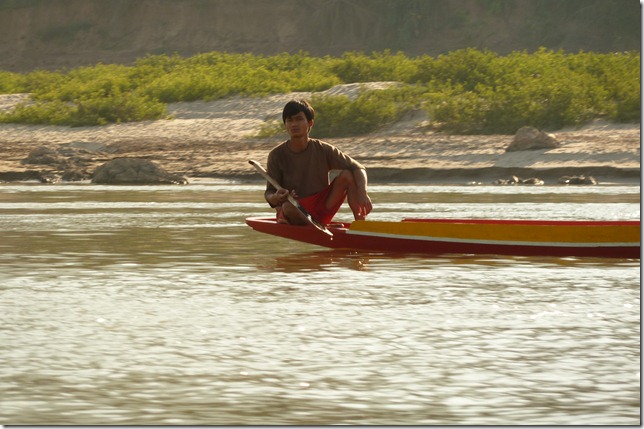 Also a buttload of local chillin’, just frolicking in the water. But whene’er the boat would pass, they’d wave their fool asses off. And of course, we’d wave our fool asses right on back at ‘em. 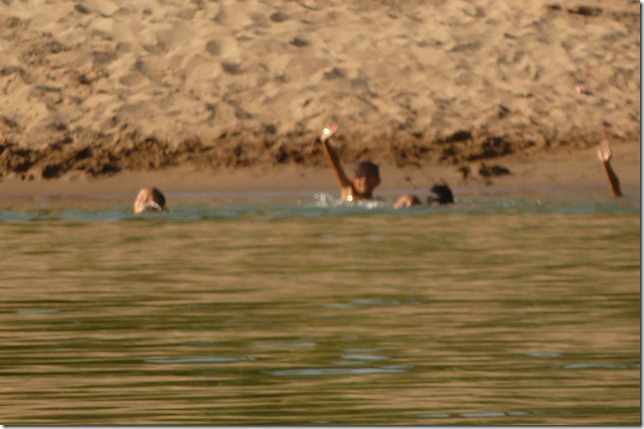 One time, a coupla boys were racing along with the boat as fast as their feet would carry, waving their fool asses off; and all of the suddenly, one of them biffed it, big-style. I’m sayin’, fucking swan dive, right into the drink. We all got a big kick out of that.

We passed this Blair Witch contraption. 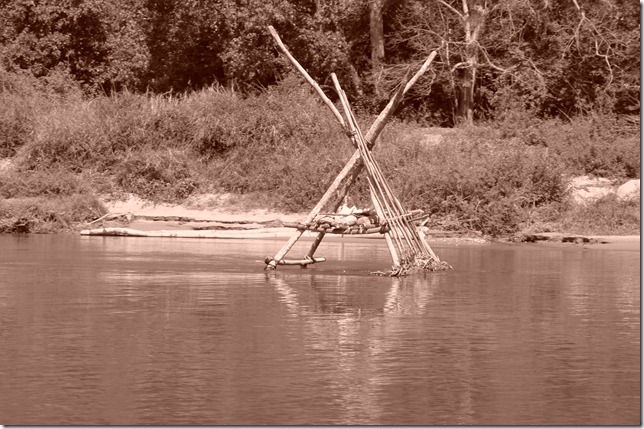 At about the mid-point, we stopped at a beach; and everybody hopped into the jungle to make some pee-pee, while the captain administered to the vessel a quick tune-up. 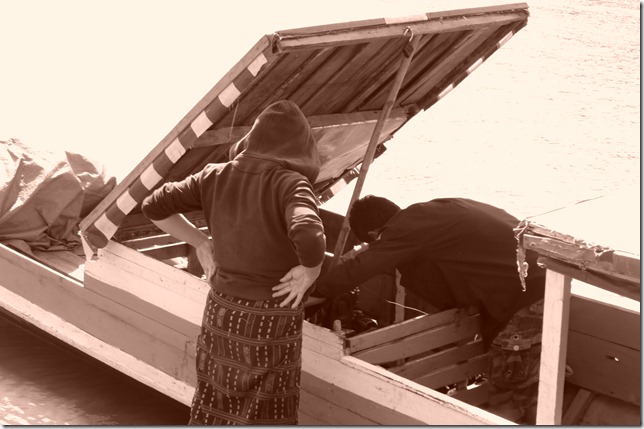 I was the only American aboard. There was one Englishman, and a half-English/half-German girl. Everybody else spoke French or German as their native languages. Quite a few shutterbugs, including one couple shooting film.

But here’s some weirdness. After an hour or so, a bunch of people began reading! What the shit? You don’t come on the slow boat for the relaxation (it may be slow, but it’s still motorised, and that shit is loud; and the benches are hard as rock). You don’t come for the great rates (about thrice that of the bus). You come to watch what’s doing on the river. Oh, well. To each their own, I suppose.

Stunning, amazing, incredible, beautiful…the whole nine yards. But the journey needs must end; and so, we did arrive in Luang Prabang at about 5:30 in the PM. Air quality was quite good at that time; but by the time I’d located my hostel, and then stepped out to find some food, it had deteriorated, although not too badly. There definitely are open fires on the burn here; and me, I’m beginning to believe that, apart from Rhythm Sticks, mankind’s greatest technological achievement must be the propane stove.

Still, though I only got to see a little bit of it before nightfall, I get the feeling I’m going to love this town.

At the Night Market, I met a couple of ladies from Seattle (well, factually, Mount Vernon and Anacortes), names of “Jill” and “Shannon”. They said they’d been in Vietnam, and it’d been cold and rainy. Huhn, that’s not the impression I got from my Vietnam-dog-kebab friend in Chiang Mai…but then, perhaps I did not inquire with him about the weather.

They said that the library (I think it was) here has an opening for an English teacher. Hmmm… The Englishman whose bunk abuts mine own told me that while in Vientiane, he learnt that it would be easier than pie to get a job teaching English there. He wants to try his luck in China, however, as it apparently pays better.

The guy’s really cool, cracking me up ten ways from Sunday. He did warn to watch my shit, as apparently there’s been a bout of thievery here (eh, maybe that’s why it’s only four bucks a night for a seemingly quite nice place); including, he said, his moisturiser. He said that he didn’t want to sound too feminine, saying that he used moisturiser. But I gather that when he gets out of the shower, and puts it on his hands and face, it pretty much makes his year.

He’s been away from England for six months, and wants never to return. (Is running out of money, however, hence the looking-into of the teaching of English in China.) He began his journey by riding the good old Trans-Siberian Railway. I’m rather keen to do the same, so asked if it’d been difficult to make Visa arrangements. This set him off, but good.

“The fucking Russians are total cunts when it comes to Visas. The Mongolians and Chinese are cool, but the Russians are fucking bastards.” And so on and so forth. Boy, did I laugh my ass off that time!

2 Responses to Not Exactly A Manic Monday (Nor Tuesday, For That Matter)