Christmas At The Zoo

Walkin’ to the zoo from the skytrain, some field-tripping kids were most enthusiastically willing to pose for the camera. Thought they might also be headed for the zoo, but then their bus turned down the wrong road. Walk into the zoo, and what’s the first thing I see? That’s right, Smitty! The zoo was…I’ve been philosophically opposed to them, though had not visited one in many, many moons. All the guidebooks say it’s great, as did one of the hosteliers, and another hostel guest. So I figured I’d give it a try.

Can’t deny that there were many exotic animals that it was fun and interesting to see. 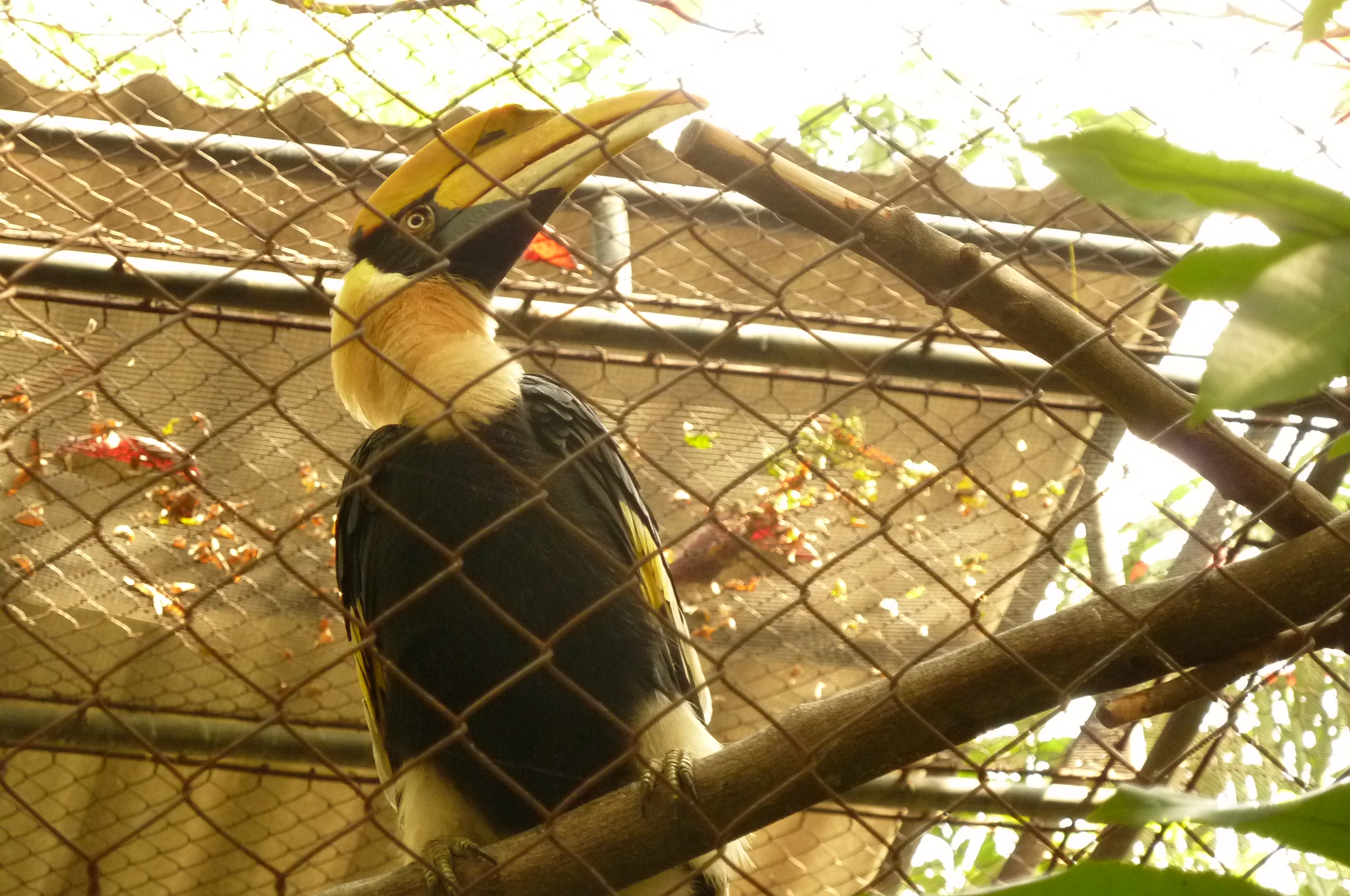 And the enormous size of some of the animals — giraffes, tigers, ostriches, primarily — was fairly jaw-dropping (as I say, it’s been quite a while since I’d seen any up close). But the pens are so small! Ridiculously so. The animals, unable to really get any exercise, just looked sad and lethargic.

Will acknowledge that the gibbons were rather frisky, and that the hippos seemed happy to take any food that was threwn their way… …and certainly the signs talk a good game — eliminating poaching, and restoring habitat and all. But overall, it just seems so inhumane.

After leaving the zoo, it was time to get lost in nearby Chinatown yet again. The illustrated maps all have “Giant Swing” among Chinatown’s attractions; and, y’know, who doesn’t want to see a giant swing? So I thought to go check out the Giant Swing, then make my way down to the river, seeing the sights along the way, and hopping the river taxi back down to Silom area.

The maps were steering me wrong, however. Keep using them because, much like the drunk looking for his keys under the lamp-post, that’s all I’ve got! Probably with all the consulting of the maps, I look like an easy mark. (Or, perhaps, the first rule in Bangkok scamming is: “Gringo Yankee = Easy Mark!”)

Not one, but two different grifters approached me, scoffed at my idea of going to see the Giant Swing, and proceeded to explain that it was “National Buddha Day”, and so none of the temples were charging entrance fees. Moreover, the government was reimbursing tuk-tuk drivers for their fuel, so they were able to charge reduced rates to-day to give a tour of the temples. Also, the river taxi would not be running, because of activity at the riverside temples.

Only tuk-tuks with yellow licence plates, not white, were giving the discount. One of the grifters, as he was finishing explaining it all, and bidding me good luck, was even so nice as to hail a yellow-licence tuk-tuk for me. After I assured the driver that I didn’t want a ride, he went around the block and offered again before I was finally able to deter him.

This is apparently one of the more infamous scams in the city. All the guidebooks warn about it, as well as the hostels and whatnot. Even the temples have big signs posted. Good on ’em for the warning, to be sure. But gotta wonder: what if one does want to see some pornonraphy or visit unethical institutes? Could be lots of fun!

Well, I done and gave the grifters the wrong answer, because the Giant Swing can’t be closed due to holiday. So to get me on my way to the unethical institutes, the grifters had to think on their feet a bit. But the thing is, even non-scammers were derisive of my desire to see the Giant Swing. Why would you wanna see that, they kept asking, when there are so many Buddhas to see?

I wanted to always answer, “Why the fuck wouldn’t I want to see the Giant Swing?” But I never, ever did. I don’t know, the thing with the Buddhas…do you really need to see all of them? There’s Sitting Buddha, Standing Buddha, Reclining Buddha, Big Buddha, Black Buddha, Happy Buddha, Sad Buddha, Headphones Buddha, Touchdown Buddha, Rockets’ Red Glare Buddha… You name  it, they’ve sculpted it. I think somebody even said that there’s a Skinny Buddha.

Okay, the Buddhas are pretty impressive… …as are the buildings in which they’re housed… …but, come on: spend all day looking at Buddhas, or find the Giant Swing? Shouldn’t this be a no-brainer?

And finally, mercifully, wonderfully — after more wrong turns, re-tracings of footsteps, and quizzical gazings at of street signs than I care to remember — I did manage to locate the Giant Swing! 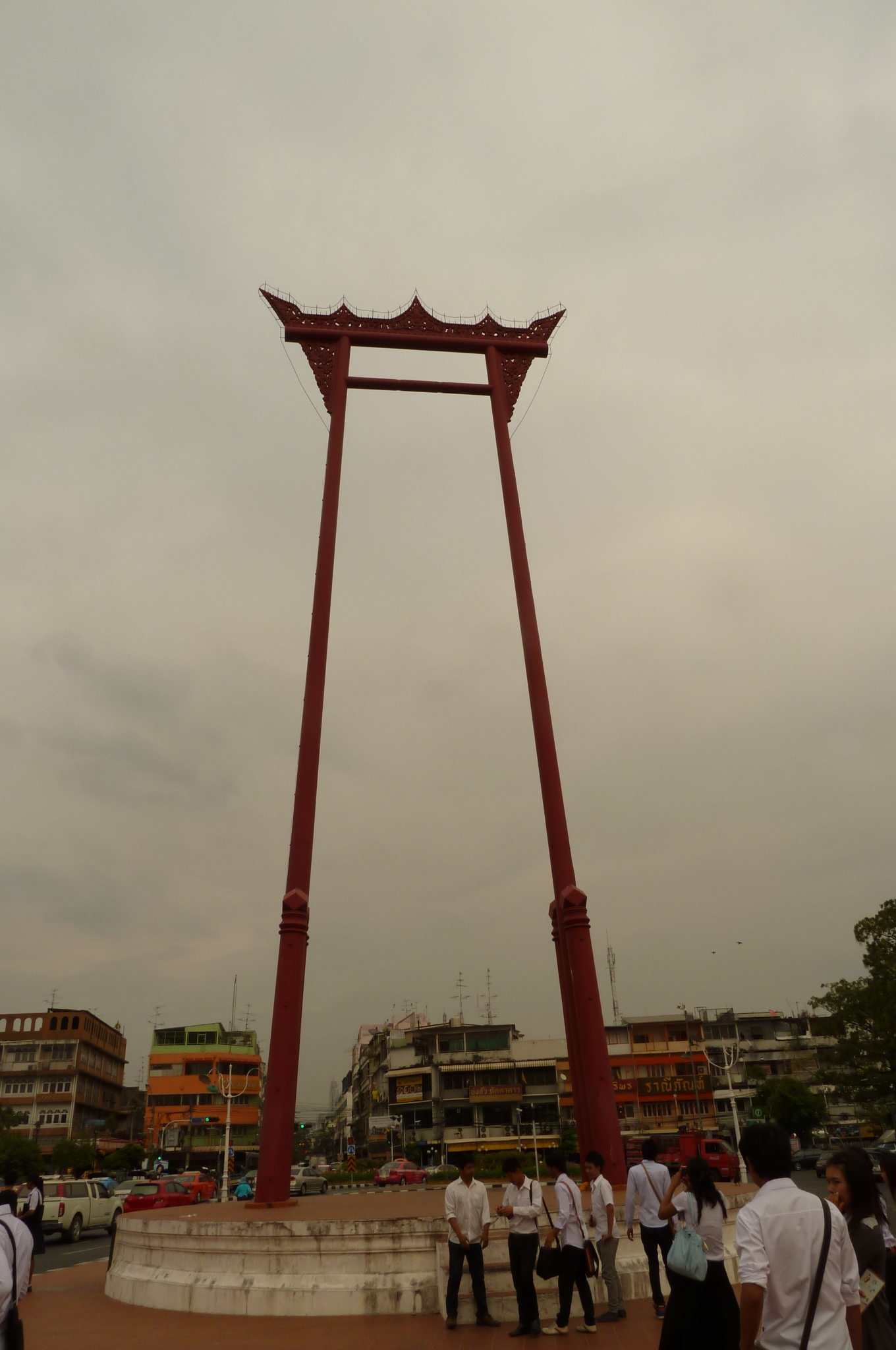 Giant Swing! Yeah! Hope you were sitting down for that!

Later on, back in Silom, chanced to hear a pretty rockin’-sounding band playing in a bar, and went in to check it out. Turns out, they were more than just pretty rocking. They were stone-cold superior. The drummer and guitarist, especially, were just killing it. Possibly the best drummer/guitarist combo I’ve seen since Metric dazzled the Bumbershoot about five years ago.

Kind of a Rockabilly/Surf/Garage/Punk ensemble. Seeing a Thai Punk band with a four-foot-something female vocalist performing “Ring Of Fire”, “Highway To Hell”, “Johnny B. Goode”, and “Blue Suede Shoes” back-to-back (leaving nary a moment to catch their collective breath between songs) whilst Russ Meyer footage (or what) is being rear-projected behind them wasn’t exactly on my list of things to do here. But had I known the possibility existed, it may well have been! Speaking of rocking, there are very few street musicians here. But did see one yesterday, absolutely ripping the shit out of a Thai guitar, and stopped to watch for a bit. Presumably having noticed my bare feet, he stopped what he was doing and tried to give me 50 Baht! Crazy.

Then, just a few minutes later, I was walking down the street, and stepped on a still-lit cigarette butt, and began to curse up one side and down the other. An American hippie walking behind me offered to get me some shoes. (For the record, that’s the first time I’ve ever stepped on a still-lit cigarette butt. Let’s hope it’s also the last. God damn.)

Sheesh, I must look like some kind of something if I’ve got hippies and street musicians offering to help me out. Too bad my middle name is “He’s So Ethical”, or I could be really cleaning up, here!

Also, met another European juggler. This one a Dutchman, who’s very, very good. But when I told him where I’m from, he burst out with, “Jimi Hendrix was born there!” Huhn, had not been aware that Seattle is seemingly principally known for its rock and/or roll icons. Well, that’s a helluva lot better that being known for Micro$oft, Boeing, and Weyerhaeuser!

Have had this in my head all the day long.

2 Responses to Christmas At The Zoo