So, Bangkok. The hottest city in the World, at its hottest time of the year. Occlusion is the name of the game right now. It’s more easily accomplished here than elsewhere in the region, as it’s frequently partly cloudy in the morning and afternoon hours; and also ‘cause there are lots of tall buildings, and awnings, and whatnot.

Even when one is able to escape the deathly sunbeam, it’s still as if in a sauna. It means rivers of sweat pouring down. But, what’s one gonna say? There’s so much to see and do here in the city, that sitting around all day bemoaning the heat isn’t an option. One must carve out, I’m finding, a slice or two or three here and there with each successive visit.

First wanted to run some errands, however. Yesterday, Thursday, was a great day, as the most important of these was successfully navigated: I found a pair of Sennheisers!! Look, I’m fully aware that it’s deuce moronic to be as ecstatic as I am over this. But, moronic or no, I’m very fucking happy about this.

See, I’m rather hard on headphones. Finally, while at Hawaii The Big Island, I just decided that, basically, if I can’t properly care them, then I don’t deserve to own Sennheisers. Now, my will has been broken – though at least I’ve developed a plan by which I hope to make this the longest-lasting pair ever. I will notify you if that happens.

I failed, however, getting  my camera repaired. Found a guy who said he could do it, but wanted 1,000 Baht for the job. Too steep for me; so the camera will alas continue to serve up the flawed images.

Some other goals have been fulfilled, some not. You’d never believe how difficult it is to find unwaxed/unflavoured floss in Asia! Checked every single shoppe in Siem Reap, for example; and so far no luck in Bangkok.

Anyways, continuing the project of getting ‘round by bus rather than subway/skytrain has proved fruitful, if time consuming. I love riding the buses in this city, even if traffic is often at a complete standstill, and the buses seem rarely to end up where I’d expected them to.

I did to-day, Friday, finally make it to Wat Arun. This is one of the most famous temples in the city, but I’d not previously managed to take it in. In a word: “Wow.” In two words: “God damn.”

How to explain? It’s kind of impossible to do so in words. But I’m rather crestfallen, to be honest, at how poorly the pictures tell the thousands of words they’re alleged to be able to tell. At any rate, I suppose they may give some sort of impression. 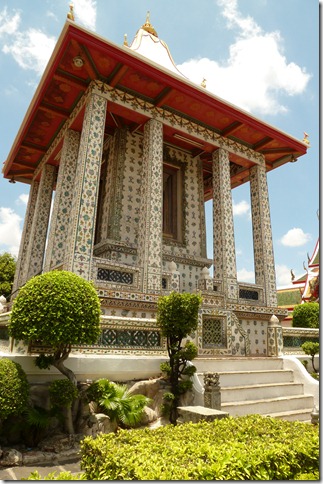 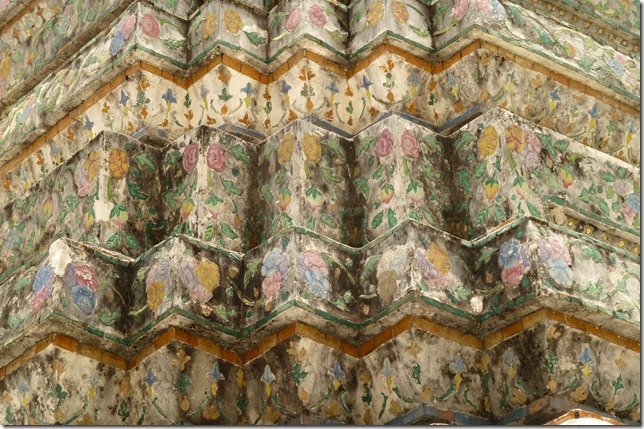 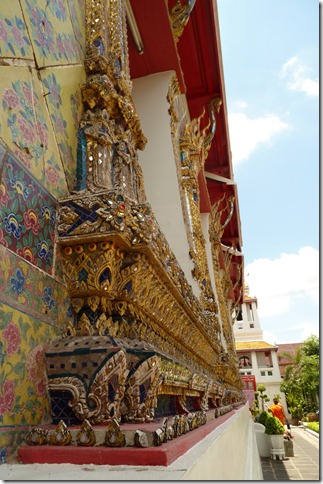 It’s as though it’d been designed by little kids, with materials sourced from the Ben Franklin (or perhaps even the Goodwill). And the effect is so stunningly incredible that one’ll be practically holding one’s breath for the duration of the visit.

Don’t know why the Temple’s shrine near to bowled me over upon first glimpse – certainly, nothing one will see in this photo can explain it. But, it did. 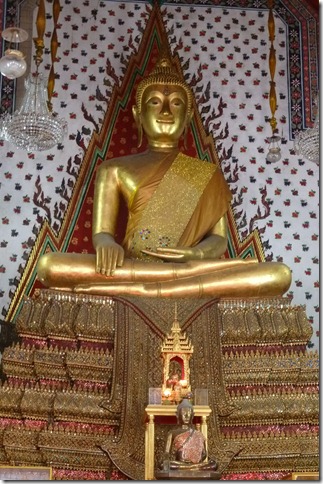 Also a Chinese temple on the grounds, the inside of which is so beautiful one wants to just weep and weep. …And then weep some more upon opening up the photographs. Oh, well; here’s one that’s okay. 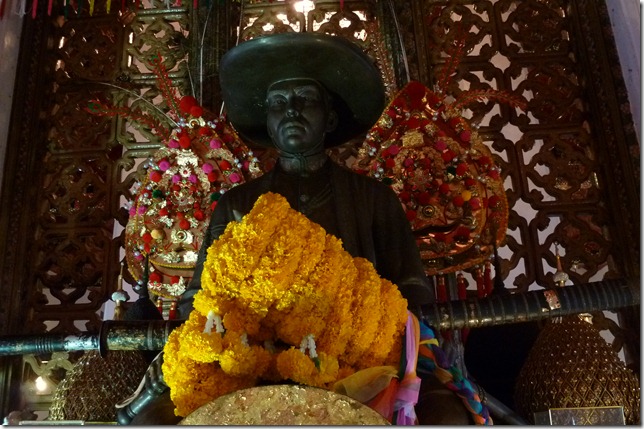 And then there’re the Prang rising up. 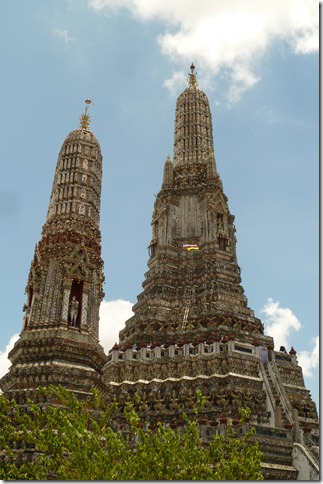 Trust me, they’re so gorgeous glimmering in the noonday sun, camera be damned! But to get in for a nice gander, it means forking over 50 Baht…and following the rules. 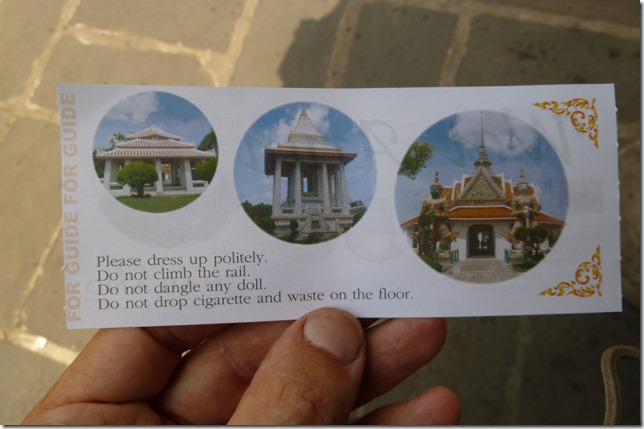 Really, “Do not dangle any doll,” is one of the four most important messages to impart? Weird, yet somehow fascinating. In order to come all up into the Prang, must navigate stairs from right out of the Angkor handbook. 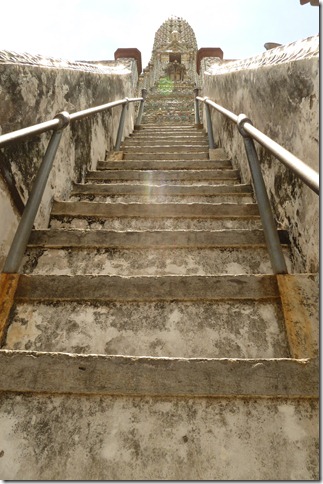 Yikes!; but it’s worth the terror, as the view from up there is fairly enormous. 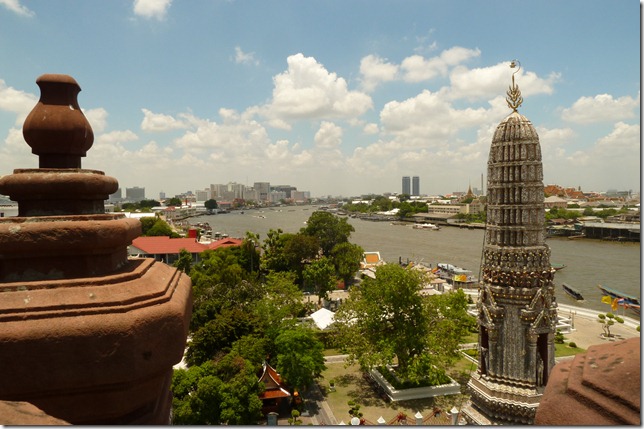 And here’s the Grand Palace. (I’ve yet to visit; someday, I shall.) 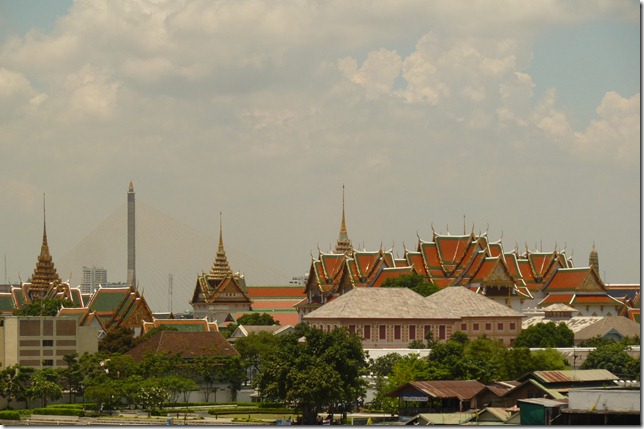 You’ve seen chickenboy aplenty; but only in Arun (that I’ve seen) will one see chickengirl. 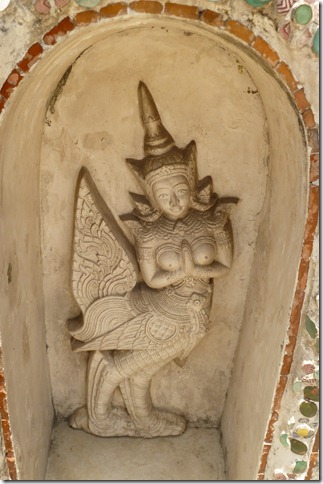 Can one get a sense of just how tall is the Central Prang? Probably not; but I can assure you that it’s way the fuck up there. 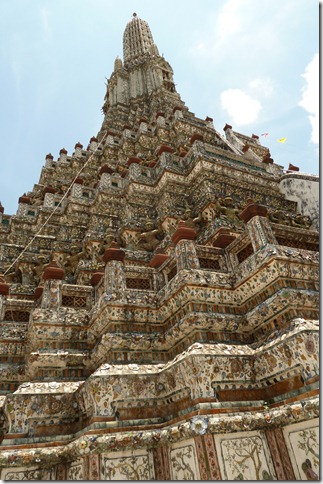 Walking around up there is one helluva experience. 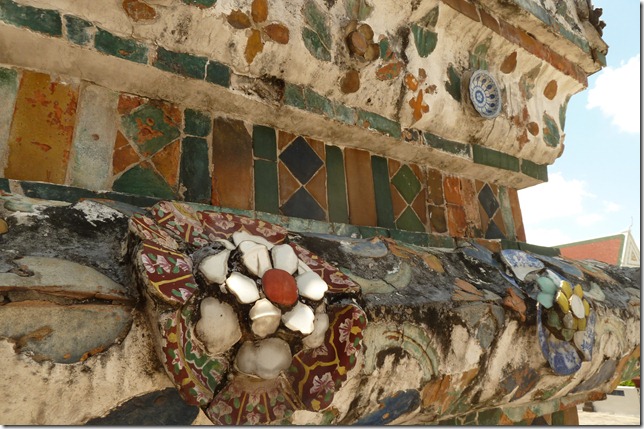 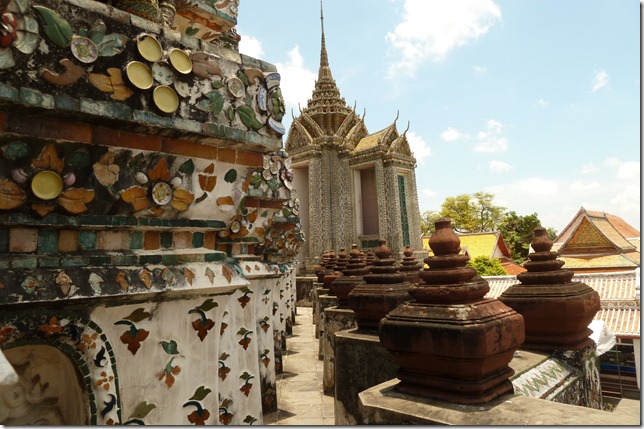 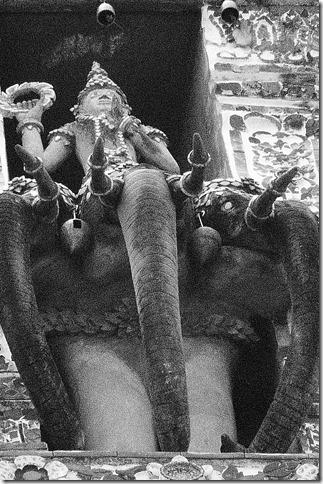 As far as the auditory side is concerned, there’re (I guess) hundreds of wind chimes hanging off the structures, and chiming away.

Arun is far the most unique temple in my experience. Is it also the best? Not quite sure I’m ready to confer that particular honour – but certainly it can be said that none is better (as in, more thrilling to visit).

I did manage to at least capture one pretty good photo (leave it to black-and-white!). 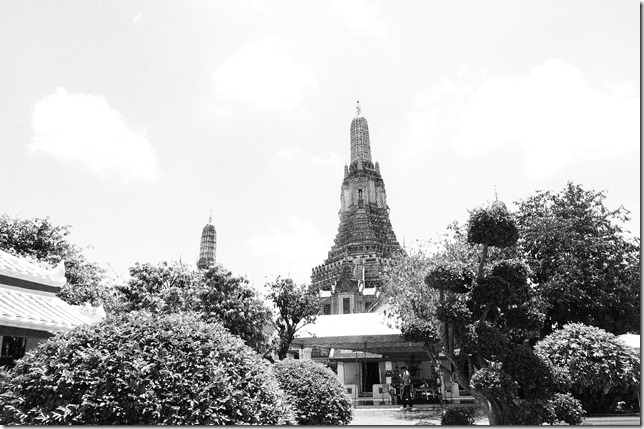 After Arun, was making my way down to Kalayanamit when, sitting Khlongside reading about the good ol’ way: the littlest novice. 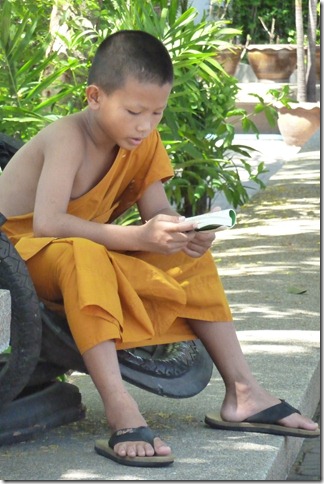 Arrived to Kalayanamit, and it looked as though the main temple hall was all closed up. But then, around to the back, it was open after all. Prepare yourself, reader, to cry out, “Holy fuck!”

I had not prepared my own self for this task, though I’d been aware that this is the site of… 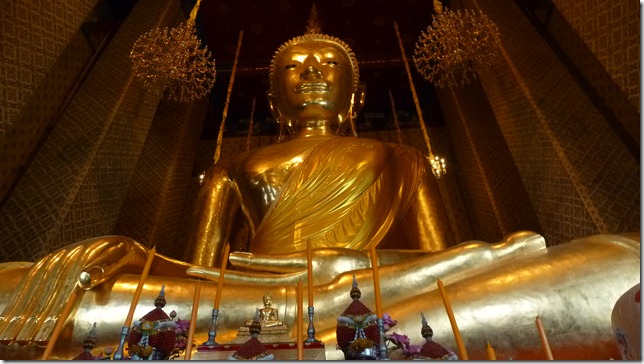 …Bangkok’s biggest Buddha. “Holy fuck!” is the only sensible reaction (at least of which I am  personally aware). Again, photos probably don’t tell the story. But that’s one big frickin’ Buddha. 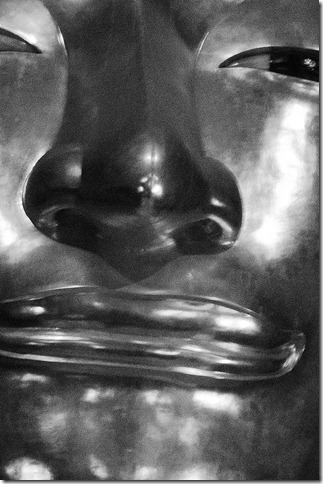 The outdoor shrine connected to the temple has figures with this interesting peeling effect, also seen at Arun. 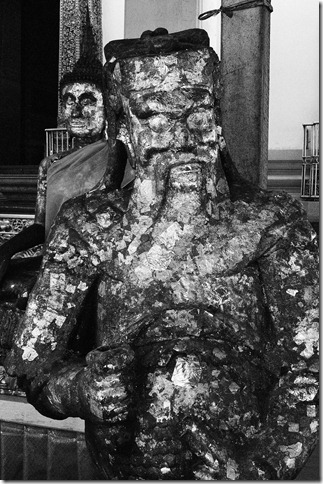 Meanwhile, the hall next door has a very small and skinny, almost comically so in context, Buddha; but there’re some truly righteous old murals in there. 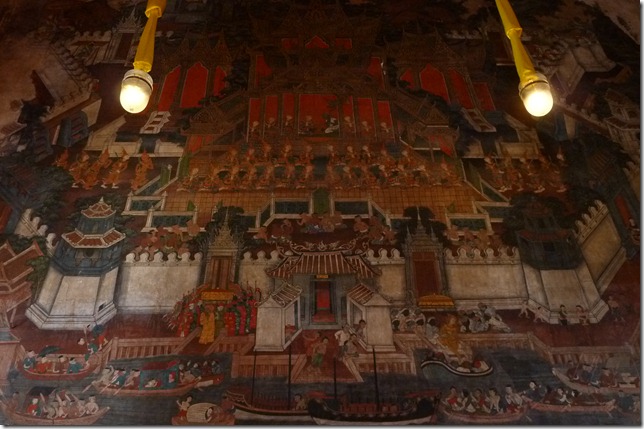 The last temple of the day, don’t even know its name; but I’ve been calling it the “Candyland” temple. 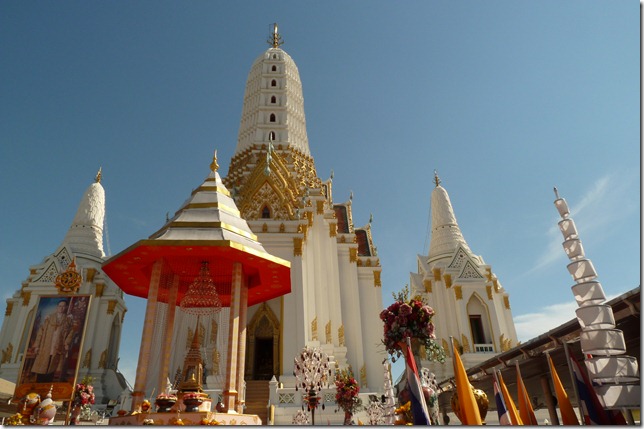 While the exteriors look wonderful enough to eat, shrine inside one of the temples looks to be one of the more expensive to’ve got assembled. 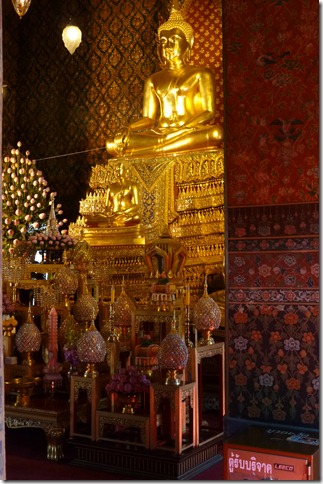 Meanwhile, there’re some pretty unhinged murals on the columns. 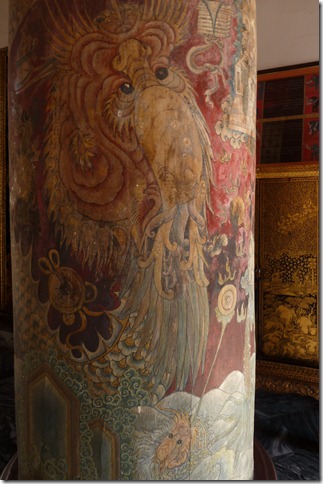 Egads! Was not able to get into the main temple there, as the pavements were hotter’n fuck-all, all whil the no-shoes-in-the-temple rule was nevertheless still in effect. Will need to make a return visit in the morning or evening, methinks.

Later, some very helpful Chinamen and –women learned me an alternative method to arrive at Khlong Toei from Chinatown via bus. No more quickly than the one I’d proposed is the journey; but at about half the fare (no A/C, which is fine with me).

Tomorrow, perhaps I shall find some floss.