This Is What You Get…

Day began at 8:30 in the AM with a Rastafarian dude who’s been here a few days bursting into the dorm with a bout of drunken ranting. Couldn’t quite make out his grievances (something to do with Social Security), but was delighted to hear his repeated mantra of, “Fuckin’ shit, mon.”

Best of all, he had “Karma Police” playing, on endless repeat, from a device hanging around his neck. Finally, the hostel staff made him turn down the music, but it didn’t stop the ranting. Best beginning to the day I’ve had here!

At the coin laundry, learned some valuable life lessons: 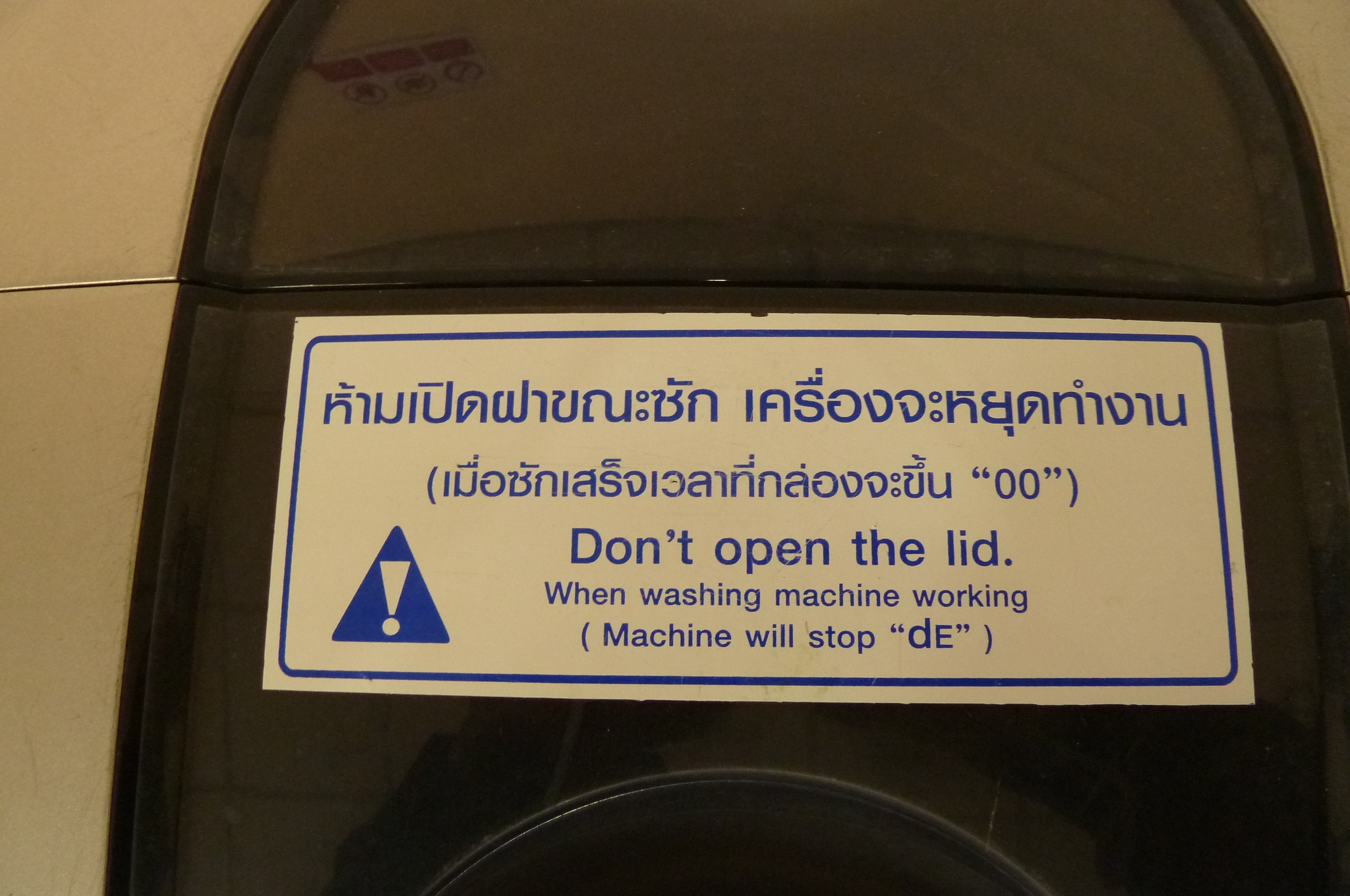 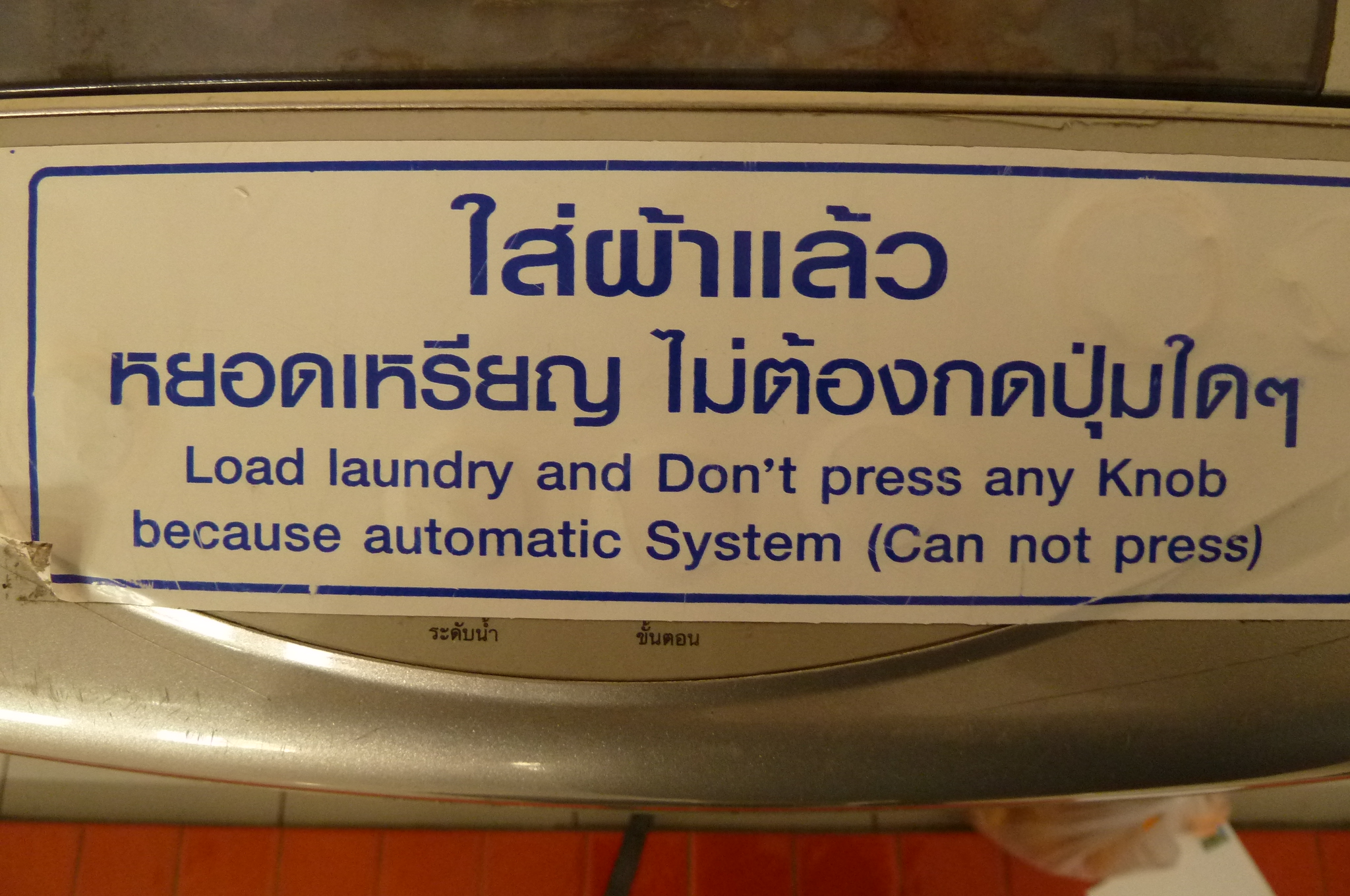 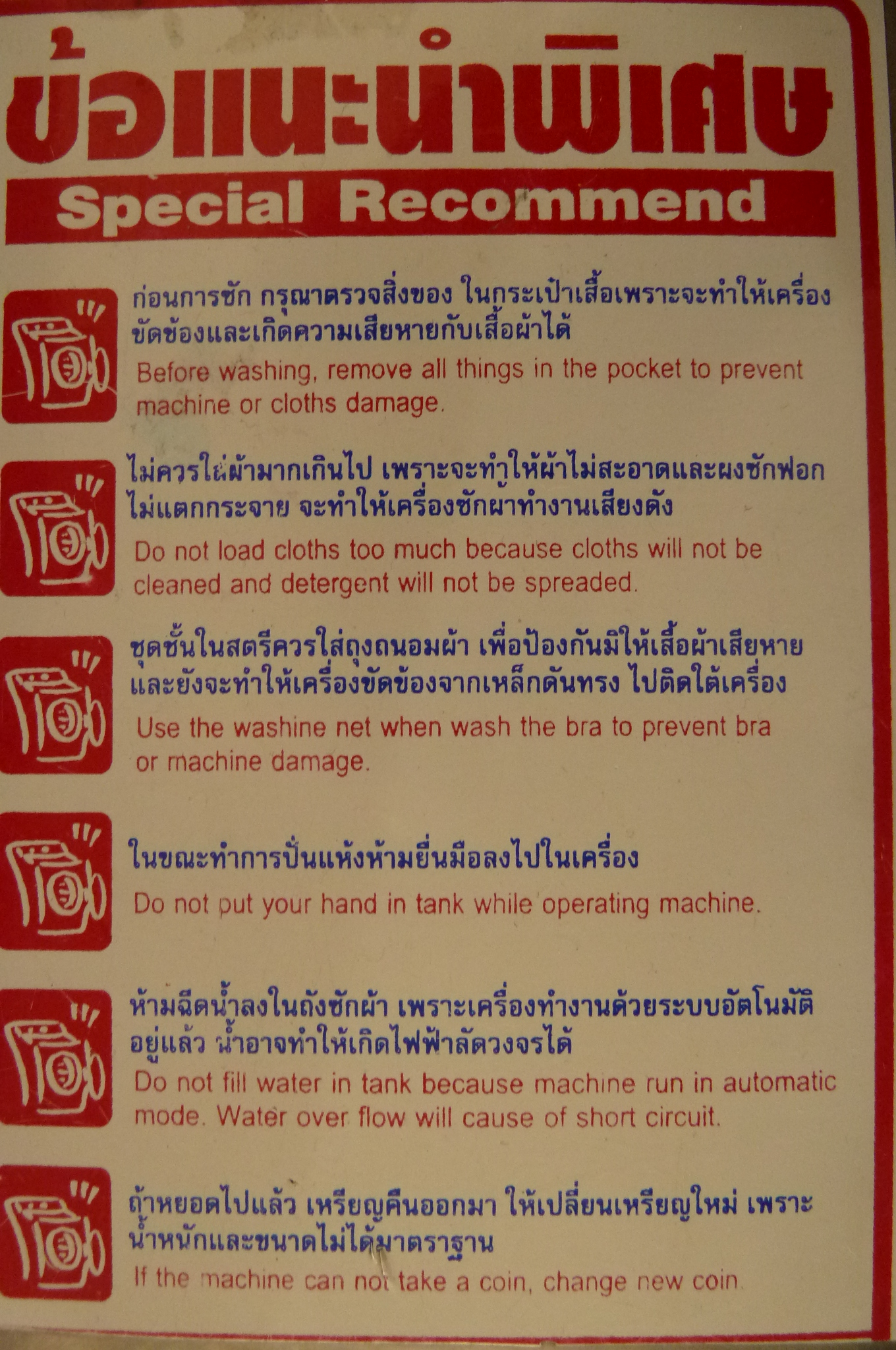 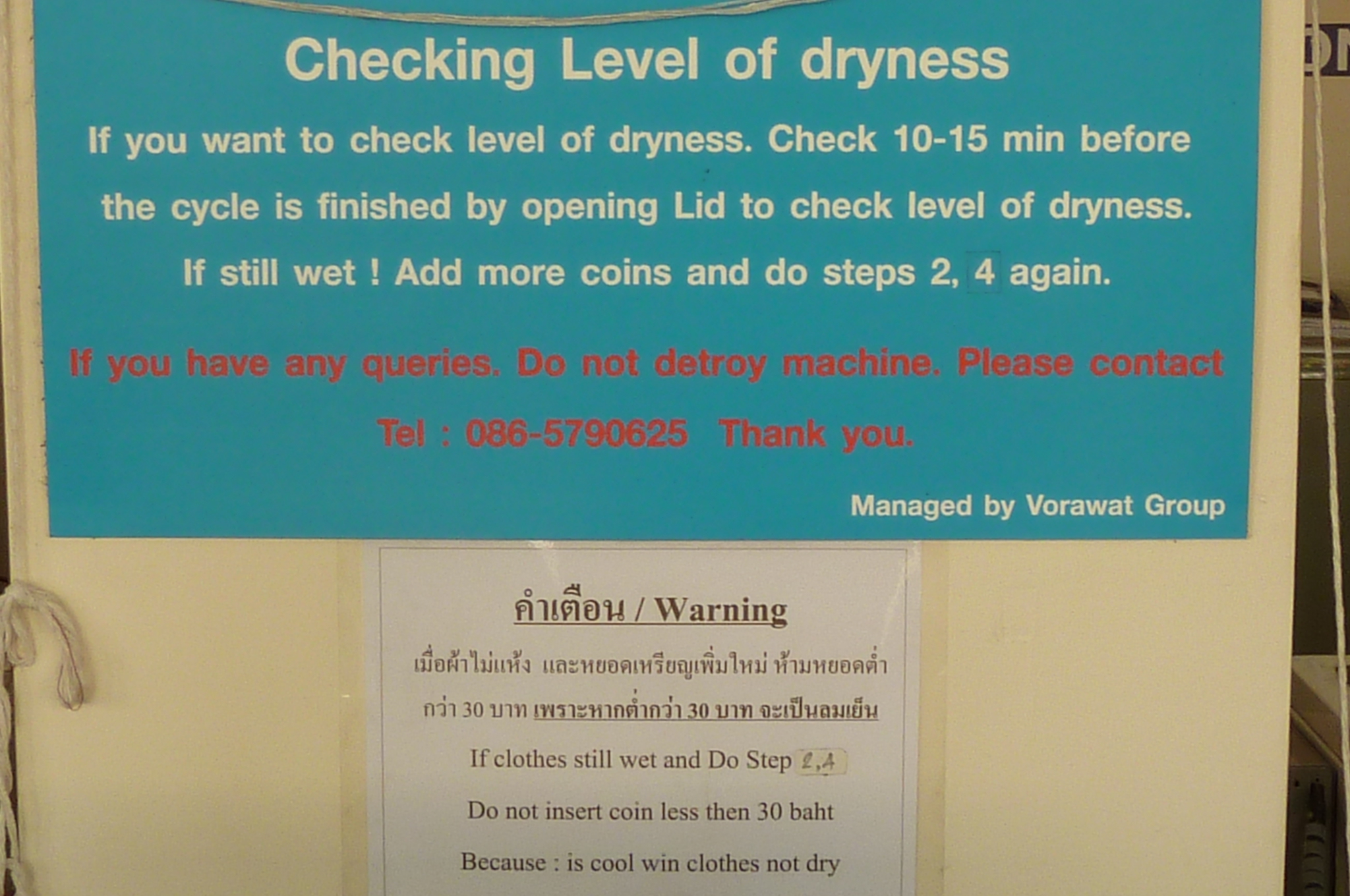 “Detergent will not be spreaded” is my new favourite best thing to say — wonder if they learned that from Dubya Bush? Cracks me up that they’re worried people will “destroy” their machines if they have “queries”…

After doing the laundry, I mailed off many postcards, so be checking your letter-boxes, people!

Errands out of the way, it was time to get in some more temples. Really, more? Yes, really, more! Even found one that I think is in my top three favourites. So you see, pays to keep looking at them.

Met a Bangkokite in town on holiday. He knew of Seattle: chilly weather and big old jet airliners. Told me I was crazy for having stayed in Bangkok three weeks — a common sentiment among both Thais and foreigners. But I say they’re the crazy ones, ’cause even in three weeks’ time, I feel as though I barely scratched Bangkok’s surface.

Actually, I’d kinda like to make a documentary about Lumphini Park. About the aerobics scene, of course. But also about the happy-go-lucky Soi Dogs, the watermelon-devouring crows, and the lazily wandering Monitor Lizards. About the cops patrolling the grounds on children’s bicycles. About the goofy characters thereabouts (e.g. the guy who can and will name off all fifty U.S. states, and the lady who will tell your fortune for 100 Baht). About the balletic rollerbladers rocking their amazing moves around tiny traffic cones. About the outdoor gym. About the beautiful trees. About the remarkable Sunday evening performances by the Symphony Orchestra.

In the afternoon, I met up with a fellow member of the 30 Bananas A Day clan (numbskull raw foodists like myself); a very nice lady from Denmark. We bought some fruit and had a meal in the park. The topic of raw food/nutrition/health came up, natch. But so did peak oil, financial armageddon, European cinema, psychic phenomena, and so forth. An enjoyable time was had by all (or, at least, me)

After which, I couldn’t resist watching more of the righteous rattan-ball players. The volleyballers were in especially top form tonight, using soccer-style bicycle-kick moves to spike the ball. One guy with a particularly good spike-kick also had a fabulous move in which he’d fake the spike and, with his back to the net, head the ball over for a sweet little drop shot. These lads were poetry in motion.

Also couldn’t resist a visit to the Night Market to see what was doing with the cooked-food sellers and eaters. 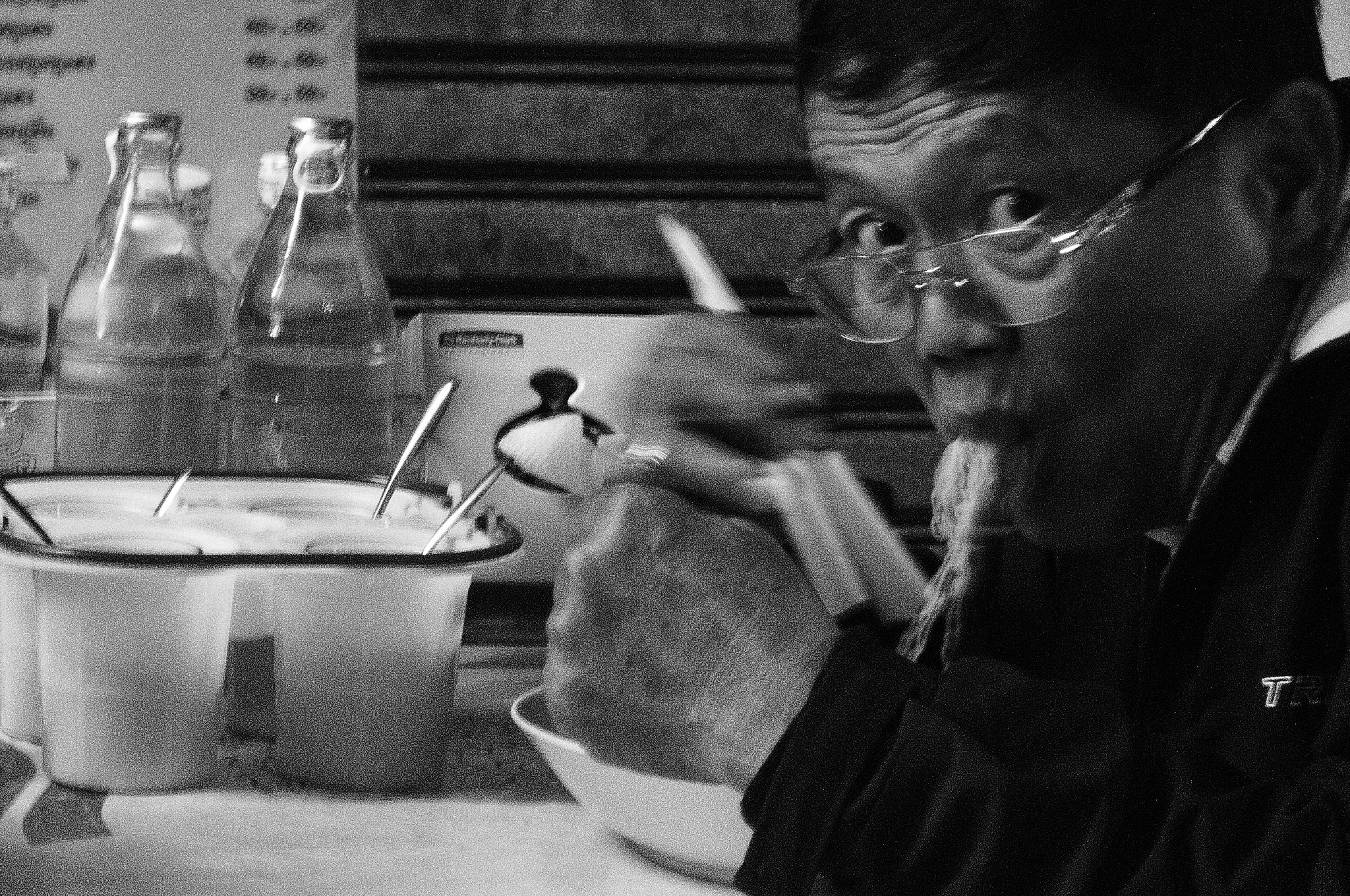 Tomorrow, my last day in Chiang Mai, I shall perhaps attempt another go at the Tribal Museum.